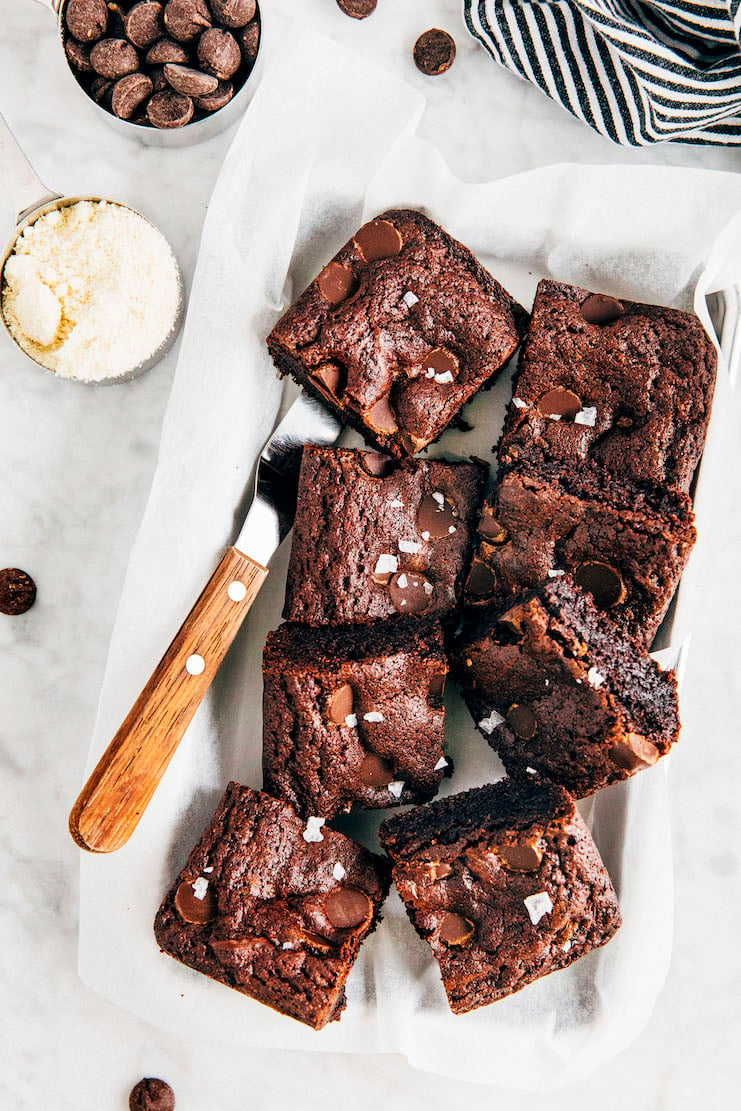 This small batch almond flour brownie recipe is baked in a 9 x 5-inch loaf pan to make 8 petite brownies! The almond flour brownies are thick, chewy, and 100% gluten free. They have no specialty ingredients and taste exactly like your favorite regular brownie!

Even without regular flour, these almond flour brownies taste exactly like your favorite brownie recipe. They have the perfect chewy texture, lots of chocolate flavor, and just a subtle hint of nuttiness from the almond flour.

The best part? This recipe makes only a small batch of almond flour brownies! The recipe instructs you to bake the brownies in a 9 x 5-inch loaf pan. Doing so results in 8 petite brownies, or 2 to 3 bakery-style large ones.

Why You Should Make Brownies With Almond Flour

Here are all the reasons to make these small batch almond flour brownies:

These almond flour brownies taste like regular brownies, but are 100% gluten free!

The recipe uses no specialty ingredients beyond almond flour.

Most gluten free recipes rely on specialty flours and more “obscure” baking ingredients like xanthan gum to compensate for their lack of gluten. While I’m no stranger to shopping for these types of ingredients (you’re talking to the girl who has recipes that use citric acid, powdered blackcurrant, tonka beans, and more in her baking lollll), I take issue with the fact that, well, after you buy it, you’re left with a massive bag to use up. And that’s a problem if you’re an infrequent gluten free baker like me. Like, what am I going to do with the remaining 8 ounces of xanthan gum after I’ve used my measly teaspoon, lol? And ditto with specialty flours (which tend to go bad much faster than regular flour)?

As a result, one of my goals was to develop a gluten free brownie recipe with no specialty ingredients. Like these almond flour brownies!

Although you could argue that almond flour is a specialty ingredient, more and more grocery stores stock almond flour as part of their regular baking inventory. It’s also incredibly easy to make at home, too (see the Ingredients section of this post for more info). If you’re a regular baker, I guarantee that you’ll have almost everything you need for these brownies in your pantry without an extra trip to the grocery store.

The recipe is small batch.

Many of us are still working from home, socially distancing, slowly dying, etc. And sharing baked goods is hard when everybody’s either working from home or discouraged from gathering in big groups!

Unfortunately, many baking recipes are written for special occasions like celebrations, birthdays, and more. As a result, the typical cookie or bar recipe makes enough to feed a crowd. I spent the last year scaling down some of the most popular recipes on my blog to make smaller batches. I’ve been steadily adding to those recipes with new additions, too.

Like this almond flour brownie recipe! This recipe makes either 8 petite brownies or 2 to 3 large bakery-style brownies—learn more in the Baker’s Notes below.

The recipe comes together quickly.

Finally, one more thing about these almond flour brownies: they come together really quickly. All you need are two bowls (and truthfully, you can probably get away with just using one bowl, too). No stand mixer required for this recipe, folks! The batter takes about 5 minutes to make by hand. That’s it!

Now that I’ve convinced you to make almond flour brownies, here’s your shopping list for the recipe:

And let’s talk about some key ingredients and their substitutions:

What is almond flour?

Almond flour is a “flour” made from finely ground almonds. I use quotation marks around the word “flour” because almond flour technically isn’t flour. Most flours are made from milling different types of wheat. But not almond flour!

Yes! Almond flour is typically used in gluten free baking since it contains no gluten.

Is almond meal the same as almond flour?

Some folks will argue with you and say that almond flour is made with blanched almonds. Blanching the almonds removes their skins, giving you a consistent pale yellowish white almond flour. Almond meal, on the other hand, are made with almonds that haven’t been blanched. As a result, almond meal contains almond skin and is dark brown and speckled in color.

But real talk: manufacturers don’t have any formal rules to follow when it comes to defining their labels as almond flour versus almond meal. Although there are some manufacturers—like Bob’s Red Mill—who do a great job of sticking to that definition above, there are many others who don’t. That’s why you’ll see almond flour labelled as “almond meal”, and vice versa. So don’t stress about it too much.

And what does it mean for these almond flour brownies? You can use either almond meal or almond flour in the recipe, no problem.

Can you substitute almond flour for regular flour?

As a result, almond flour has way more fat than wheat flour. It also absorbs liquid differently. And bakers need to account for these different qualities by adjusting other ingredients in the recipe accordingly.

Where To Buy Almond Flour

Back in the day, almond flour used to be a rarity and typically only available in fancy grocery stores and hippie food co-ops. But now, most major supermarkets carry the stuff.

Looking for a brand recommendation? My favorite almond flour is from Bob’s Red Mill (who sells both almond flour and almond meal—see my essay about the differences between the two above, lol). I also like King Arthur Baking Company’s almond flour.

How To Make Almond Flour

Alright, you proved me wrong. You could not find any almond flour at any store. No worries! You can make it at home, too.

To make almond flour at home, pulse raw almonds in a food processor until finely ground. That’s it! Be careful not to overprocess the nuts—you might accidentally end up with almond butter, lol. Instead, pulse the nuts for 2 to 3 seconds at a time until you get the texture of a coarse meal.

How to Make Brownies with Almond Flour

Why do you use a 9 x 5-inch loaf pan to make these almond flour brownies?

Great question! Most brownie recipes are baked in a 9 x 13-inch pan. This 9 x 13-inch pan is also known as a quarter sheet pan. To halve the recipe, you’ll need to use a baking pan with that has a surface area a half that size. You can typically get away with using a 8- or 9-inch square pan. But what if that’s still not small enough? What’s half of an 8-inch square pan?

Well, these specialty pans actually DO exist—they’re known as ⅛ sheet pans, or “eighth sheet pans”. But it’s rare that the average person will have one in their cupboard, so I worked to find another pan. I learned from one of my baker friends, Christina at Dessert For Two, that a 9 x 5-inch loaf pan basically has the same surface area as an eighth sheet pan. Pretty cool, right?

Note that this small batch almond flour brownie recipe won’t fill up the pan like it would if you were making a loaf cake. However, it will make enough batter to completely cover the bottom of a pan.

Yes! You can also use a smaller 8 x 4-inch loaf pan, too. Just know that your brownies will come out slightly thicker. You may need to adjust Bake Time accordingly.

Wait, I read your Small Batch Baking Tools Guide and bought the eighth sheet pan you recommended. Can I use that instead to make these almond flour brownies?

Absolutely! If you have an eighth sheet pan, feel free to use it in this recipe! Because of the pan’s shallow sides, it’s easier to see how the brownies are cooking.

Note that an eighth sheet pan is actually just a little wider than a 9 x 5-inch loaf pan. As a result, you may need to adjust Bake Time accordingly.

Other pans that could potentially work when making small batch almond flour brownies include a 6-inch round cake pan. One of my Instagram followers also made this similar small batch fudge brownie recipe of mine in this 4 x 4-inch pan. However, I can’t personally vouch for the results as I have only tried the recipe in a 9 x 5-inch loaf pan. It’s likely that you’ll need to adjust Bake Time.

Hm, I like gluten too much. Can I make this small batch almond flour brownie recipe but replace the almond flour with all-purpose flour?

As a result, you’ll need to adjust literally everything else in the recipe to account for this difference in hydration level. In fact, if you went ahead and used all-purpose flour in this recipe, it’s likely that your brownies will have a completely different (and even unpleasant) texture from mine.

I’m allergic to almonds but not other nuts. Can I replace the almond flour with another type of nut flour?

Yes! You can replace the almond flour with another nut flour. If you’re going the store-bought route, I recommend substituting it with Bob’s Red Mill Hazelnut Flour/Meal or Fisher Nuts Pecan Flour.

I loved this small batch almond flour brownie recipe so much that I want to make a regular-sized batch. What should I do?

Aw yay! I’m glad you like the recipe. If you want to make a regular-sized batch of almond flour brownies, I recommend checking out this recipe by King Arthur Baking Company. I actually heavily adapted this small batch almond flour brownie recipe from the back of their almond flour bag! The recipe is also available on their site.

Can I swap out the melted butter with brown butter?

FAQ: Questions About Storing The Brownies

The brownies can be stored in an airtight container or zip-top bag at room temperature for up to 3 days.

Can you freeze almond flour brownies?

Yes! You can freeze the baked almond flour brownies.

To freeze the brownies, individually wrap any leftover bars in two layers of plastic wrap, then a layer of aluminum foil. The aluminum foil will prevent the bars from absorbing any other flavors or odors in the freezer. Freeze for up to 3 months.

When ready to serve, transfer to the refrigerator to thaw overnight. You can eat the brownies straight from the fridge, or rewarmed in the microwave.

Use the video player below to watch my Instagram Story tutorial on how to make these small batch almond flour brownies! You can click on the left and right hand sides of the frame to skip backwards and forwards through the different recipe steps. You can also hit the frame to “pause” it accordingly.

Alternatively, head to my Instagram profile to watch these Stories! The circles underneath my bio indicate saved Instagram Story highlights for various recipes. Click on one of the circles to play the video tutorial for the recipe. You may need to swipe left or right to find these almond flour brownies. 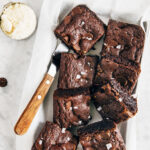 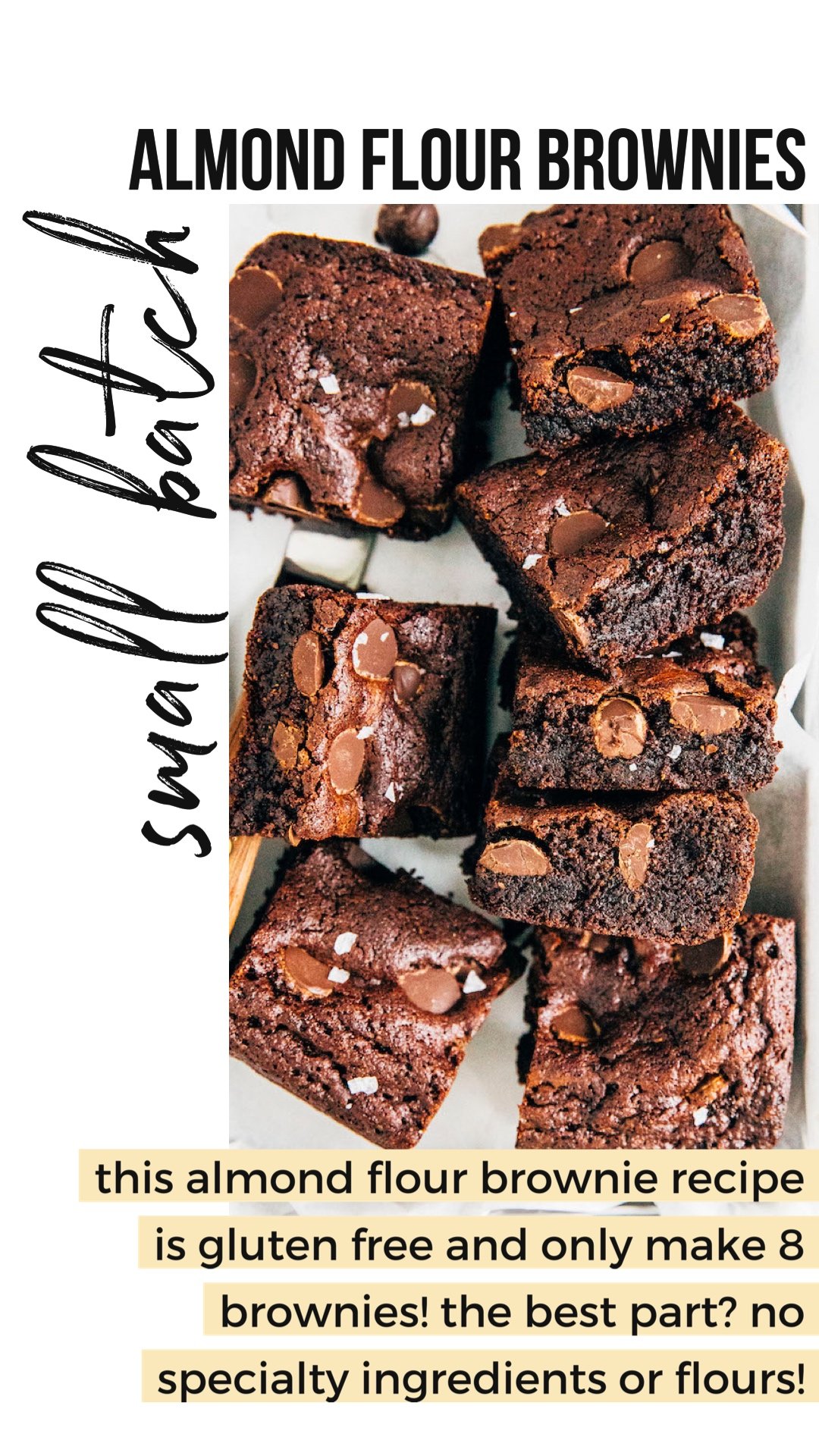