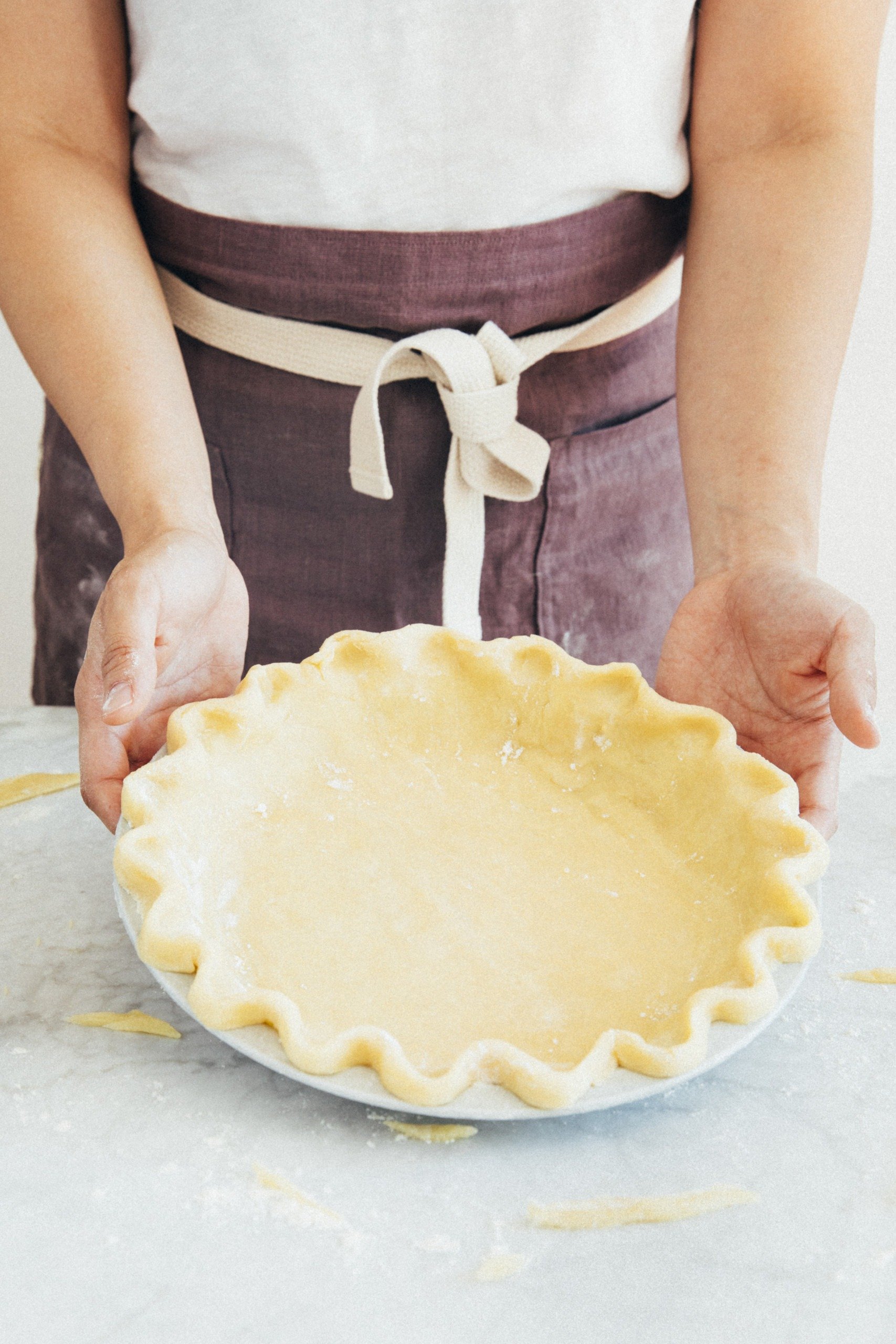 Using a stand mixer is the quickest, easiest, and most foolproof way to make pie crust, and this all butter pie crust recipe makes a flaky and crispy 9-inch double pie crust using a stand mixer! Learn more in this post complete with a video, detailed photos, tips and tricks, and FAQs.

Why You Should Make Pie Crust In A Stand Mixer

Yes, you can make a buttery, flaky pie crust in a stand mixer!

I never, ever recommend making pie dough by hand. It’s too messy and time-consuming! And while using a food processor is faster, it’s easy to overwork the butter and end up with a flat, dense, crust.

I make my pie dough with a STAND MIXER. After chilling the ingredients for the crust for five minutes, I throw it all into a stand mixer. I then mix everything on low speed like you would a cookie dough to make the crust.

It takes less than 5 minutes to come together and eliminates TONS of mess and work. Furthermore, unlike a food processor, a stand mixer allows you more control and visibility as the dough comes together—no flat, dense crusts!

The pie dough below recipe is from my cookbook, Weeknight Baking. I now use it exclusively for all the pie recipes on Hummingbird High!

Now that I’ve convinced you to make pie crust in a stand mixer, let’s talk about the basic steps to make it from scratch:

1. Prep the ingredients for the pie dough. (Prep Time: 5 minutes)

It’s important to pay attention to the temperatures of the ingredients listed in the recipe! If you make pie dough with butter or water that’s too warm, the dough will be too sticky and hard to work with.

When making pie dough, it’s best to use ingredients that are straight from the fridge, or even frozen in the freezer for 10 to 15 minutes beforehand.

In this case, that means slicing the cold butter and freezing it for 5 minutes while you work with the rest of the ingredients. Mix the water, vinegar, and ice mixture and keep it refrigerated while you measure out the dry ingredients.

Because of my stand mixer technique, this pie dough comes together in less than 10 minutes!

To make it, combine the flour, sugar, and salt in the bowl of a stand mixer fitted with the paddle attachment. Add the butter all at once and beat on low until the mixture has the texture of a coarse meal for about 3 minutes. Finally, add 6 Tablespoons of water from the water-vinegar-ice mixture and beat until the dough clumps around the paddle.

Divide the dough into two even halves, forming them into a flat disc. One of these discs will be for the bottom crust, while the second will be for the top crust of your pie. Wrap each portion tightly in plastic wrap and flatten into a small disc.

The dough needs to chill in the refrigerator for 1 hour before you use it in the pie recipe of your choice. However, at this point, the dough can actually be frozen for up to 3 months. Just make sure to store it properly to prevent it from absorbing weird odors and flavors in the freezer—learn more in the Troubleshooting and FAQ section below.

Here’s everything you need to make pie crust in a stand mixer:

And let’s talk about some key ingredients and their potential substitutions:

Can you freeze pie dough?

Yes! To freeze the dough, tightly wrap each portion in a second layer of plastic wrap, followed by a layer of aluminum foil. Doing so will prevent the dough from absorbing any flavors or odors in the freezer.

Freeze for up to 3 months. When ready to use, transfer to the refrigerator to thaw overnight.

Can you use a handheld electric mixer to make this pie crust?

Sadly, no. A hand held electric mixer won’t work for this recipe. Its beaters aren’t strong or fast enough to incorporate the butter into the dry ingredients quickly. Everything gets too melty and you’ll end up with a dense, flat pie dough.

Can you halve the recipe to make just 1 disc of pie dough?

Yes! That’s what I did in this chocolate chess pie recipe (which only needs a bottom crust).

Help! My pie crust wasn’t flaky. What did I do wrong?

The recipe below instructs you to beat the dough only until it clumps around the paddle and/or sides of the stand mixer bowl. If you continue to beat it after it’s clumped around the paddle, the butter incorporates TOO much and your pie crust won’t be flaky. Stop the mixer right when the dough clumps!

Now that I’ve taught you how to make pie crust in a stand mixer, here are some recipes you can use for its filling: 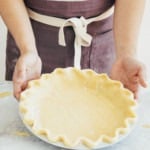