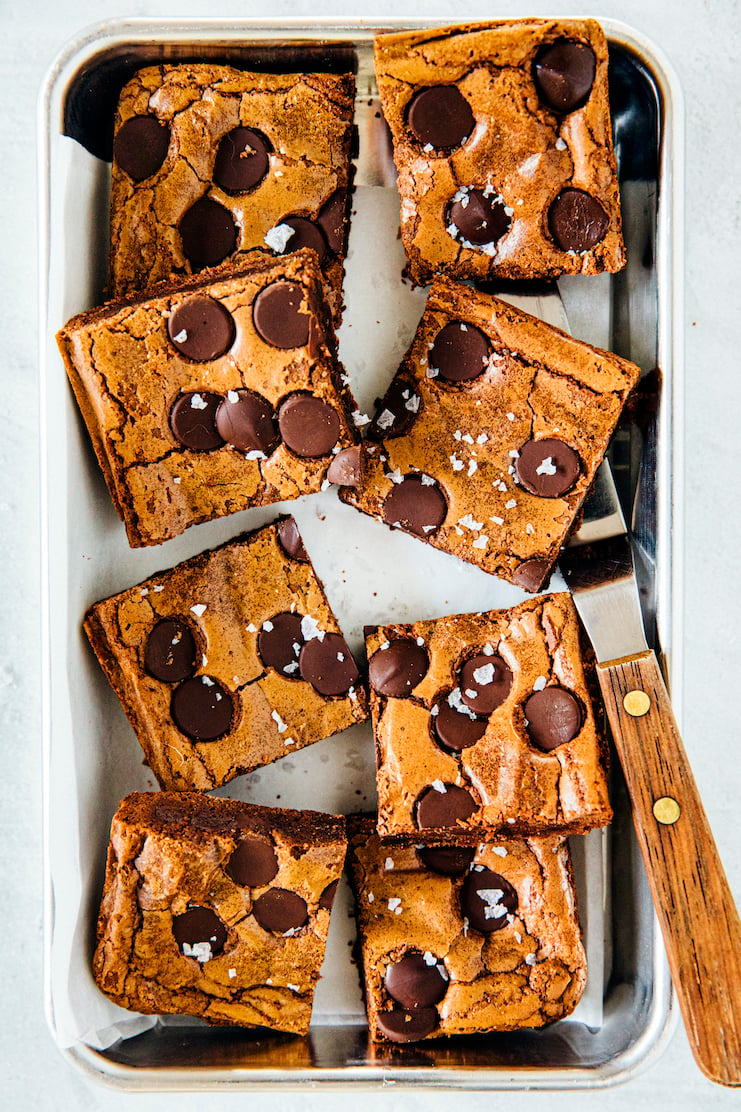 This small batch fudge brownie recipe makes either 8 humble-sized, all edge piece brownies (or 2 large bakery-style brownies). It is a small batch version of one of the most popular brownie recipes on my blog and in my cookbook, the Better-Than-Supernatural Fudge Brownies.

Why You Should Bake Small Batch Brownies

In case you missed it, I spent the past two weeks sharing recipes more suitable for our current times like these small batch brownies on my Instagram account. What does that mean, exactly? I focused on sharing recipes that were either:

After sharing a recipe for eggless chocolate chip cookies, many folks requested I share a small batch brownie recipe. I decided to adapt my recipe for Better-Than-Supernatural Fudge Brownies to meet everybody’s requests.

This brownie recipe is one of the most popular recipes on my blog and in my cookbook. The recipe makes brownies that are incredibly dense, chocolatey, and FUDGY. Their signature “look” is a shiny sugar top that flakes like paper, as well as a generous sprinkling of chocolate chips.

Unfortunately, both the recipe on the blog and in my cookbook make a total of 20 brownies. This small batch recipe, however, makes a quarter of the original recipe. Depending on the how you slice the brownies (we’ll get to that in a hot second), this recipe makes either 8 petite edge-piece brownies or 2 epic bakery-style brownies.

And let’s talk about some of the key ingredients in the recipe:

Whenever I share a recipe that uses dark chocolate, many of you ask if you can use bittersweet or semisweet chocolate. Many manufacturers make chocolate bars that are specifically for baking; these are often labeled “bittersweet”, “semisweet”, or “unsweetened”. You’ll notice that “bittersweet” and “semisweet” typically don’t include cocoa percentages. That’s because there’s no official benchmark for each designation. Specifically: it’s up to the manufacturers to determine how much cocoa to use, and cacao percentages for each type will vary greatly between brands.

That’s why in my cookbook, I advise folks to ignore these bars and instead stick with the ones that list their cocoa percentages. That’s truly the only way to know what you’re getting! In a pinch, however, you can use either bittersweet or semisweet chocolate for these small batch brownies without too much consequence.

Can I melt chocolate chips for this recipe?

I don’t have chocolate. Can I substitute the chocolate in the recipe with cocoa powder?

Many of you also asked if you could substitute the chocolate in the recipe with cocoa powder. Unfortunately, the answer is no. That would change the recipe completely and it would no longer make fudge brownies. If you only have cocoa powder on hand, I highly suggest checking out the Better-Than-Box-Mix Cocoa Brownie recipe in my cookbook. Although it’s currently not on my blog (though I am planning on sharing a small batch version of it soon), my friend Jeanine recently published the recipe on her site, Love and Lemons.

Most folks think that brownies are defined by chocolate. But butter plays a big part in the way brownies taste, too. For this small batch brownie recipe, you can use either unsalted or salted butter without changing the flavor too much.

Natural unsweetened cocoa powder is more typical and is cocoa powder in its purest form. It is slightly reddish brown in color and results in deeply flavored chocolate goods. Because it is slightly acidic, it is often paired with baking soda in baking recipes to help create a chemical reaction that will cause the baked good to rise in the oven.

Because this brownie recipe does not contain any leaveners, you can use whichever cocoa powder you prefer without any changes in texture. Just note that using Dutch-processed cocoa powder will result in darker colored brownies.

I don’t have either Dutch-processed or natural unsweetened cocoa powder. What can I substitute it with?

If you have neither types of cocoa powder on hand, no worries! You can still make these small batch brownies. Simply omit the cocoa powder in the recipe and just use the melted chocolate. Doing so, however, will result in brownies that are fudgier and more ganache-like. That’s because the cocoa powder is what gives these brownies a slightly chewy texture.

Most brownie recipes primarily use white sugar in their recipe. However, I like the extra moisture and flavor that brown sugar gives in these brownies. In a pinch, you can use either light or dark brown sugar.

To make the small batch brownies, you will need a handful of “specialty” tools:

The original recipe for Better-Than-Supernatural Fudge Brownies is baked in a traditional 9 x 13-inch pan. This 9 x 13-inch pan is also known as a quarter sheet pan. To quarter the recipe, you’ll need to use a baking pan with that has a surface area a quarter of that size. These specialty pans actually DO exist—they’re known as ⅛ sheet pans, or “eighth sheet pans”. But it’s rare that the average person will have one in their cupboard, so I worked to find another pan.

Luckily, I learned from one of my baker friends, Christina at Dessert For Two, that a 9 x 5-inch loaf pan basically has the same surface area as an eighth sheet pan. This small batch brownie recipe won’t fill up the pan like it would if you were making a loaf cake, but it will make enough batter to completely cover the bottom of a pan. You can also use a smaller 8 x 4-inch loaf pan, too—just know that your brownies will come out slightly thicker. That being said, if you have an eighth sheet pan, use it in this recipe! Because of the pan’s shallow sides, it’s easier to see how the brownies are cooking.

Other pans that could potentially work when making small batch brownies include a 6-inch round cake pan, or, as one of my Instagram followers reported back, this 4 x 4-inch cutie of a pan. However, you may need to adjust Bake Time. I also can’t personally vouch for the results as I have only tried the recipe in a 9 x 5-inch loaf pan.

To make small batch fudge brownies, you’ll need to melt the chocolate and butter together before using it in the batter. Always melt chocolate in a double boiler. Chocolate is especially sensitive to heat, so melting it directly in a pan will cause it to burn and scorch. A double boiler works by adding an extra layer of protection between what you’re cooking and the heat source.

I don’t have a double boiler. What else can I use instead?

If you don’t have a double boiler, don’t fret! Because here’s a secret—despite being a legitimate cookbook author and professional baking blogger, I have never owned a double boiler. You can make a homemade version instead by setting a heatproof glass bowl over a medium sauce pan filled with 1 to 2 inches of water and cooking everything on medium heat. Just make sure that the water doesn’t touch the bottom of the bowl! And if you’re having a hard time visualizing this, I suggest checking out my Instagram Stories where I demo this recipe in a tutorial (complete with videos!).

And finally, some folks prefer to melt chocolate in a microwave. Simply stick both the chocolate and butter in a microwave-safe bowl and blitz at 20-second intervals. You’ll need to stir it after every 20 seconds to encourage melting and prevent the chocolate from scorching.

How to Make Small Batch Brownies

One of the things I love the most about my Better-Than-Supernatural Fudge Brownie recipe is how QUICK and EASY it is to actually make them. Luckily, the small batch version is, too:

Why don’t my brownies have the shiny paper crinkle sugar top?

It’s likely that you either a) used too much flour, b) used too little sugar, or c) baked the brownies for too long. It’s easy to use too much flour when using volume measures. A lot of people don’t have the right technique when using measuring cups. Don’t use the measuring cup to scoop the flour in the bag and pack it down into the cup. Instead, set the measuring cup on the counter and then spoon the dry ingredients into it. Once it’s formed a small mound, don’t pack it down. Use a butter knife or bench scraper to level it off.

Finally, if you used the techniques above OR used weight measures (which I always recommend, since you won’t need to fuss with the techniques I just outlined) and are STILL experiencing issues, it’s likely that the brownies were overbaked. Check out the baker’s notes below on how to test brownies for doneness.

Use the video player below to watch my Instagram Story tutorial on how to make this small batch brownies recipe! The arrows to the left and right of the frame allow you to skip through the different recipe steps. You can also hit the “pause” or “enlarge” buttons on the upper right hand side of the frame to pause or enlarge the frames accordingly.

Alternatively, head to my Instagram profile to watch these Stories on mobile! The circles underneath my bio indicate saved Instagram Story highlights depicting various recipes. Clicking on one of the circles will play the videos you see above. You may need to scroll right to find this small batch brownie recipe. 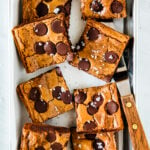 For the Small Batch Brownies

For the Small Batch Brownies 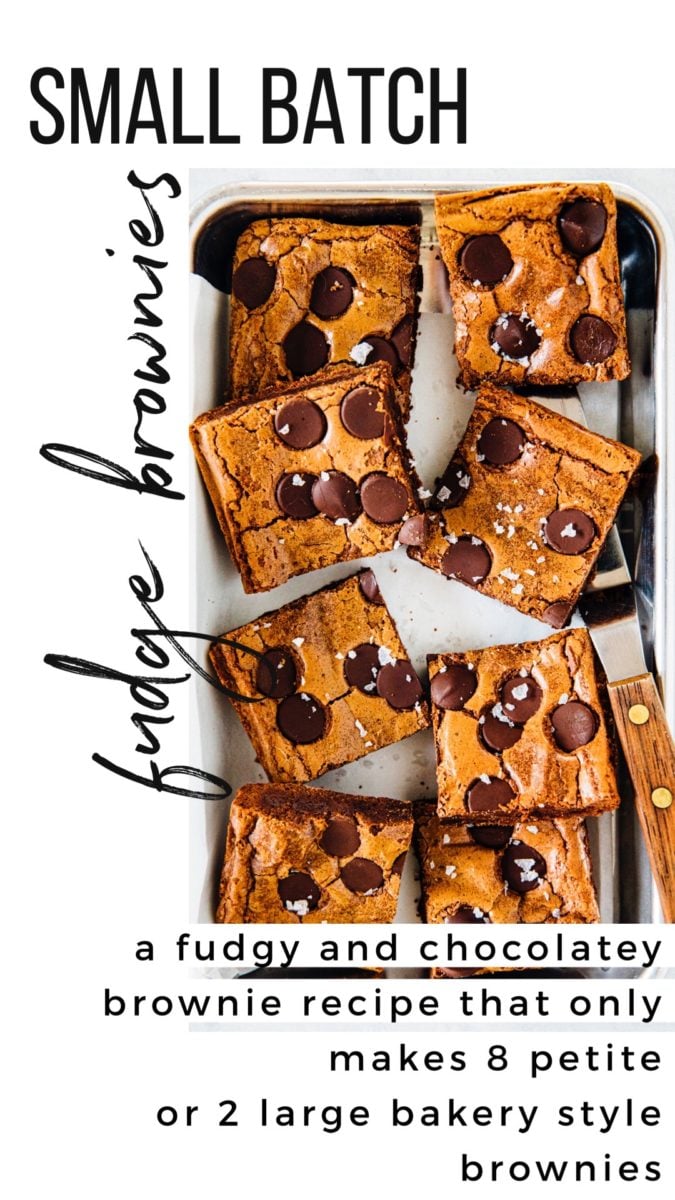