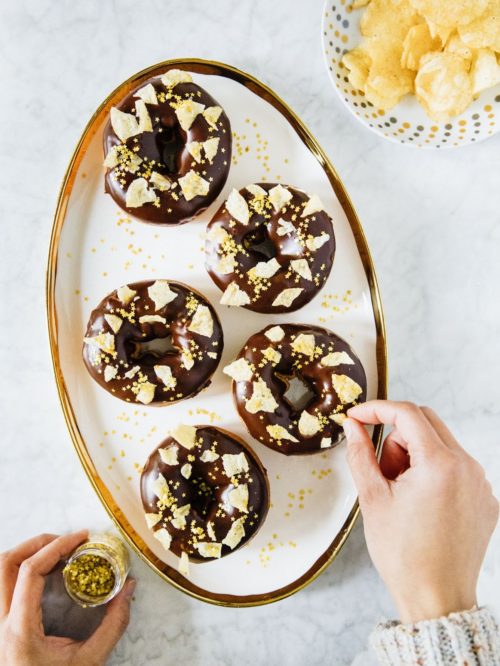 This post was sponsored by Kettle Brand, makers of THE BEST potato chips! One of my favorite things to do with Erlend is stay in, watch a movie, and share a bowl of Kettle Brand Sea Salt and Vinegar Potato Chips. We’ve literally been doing that every Friday night for the last five years, no […] 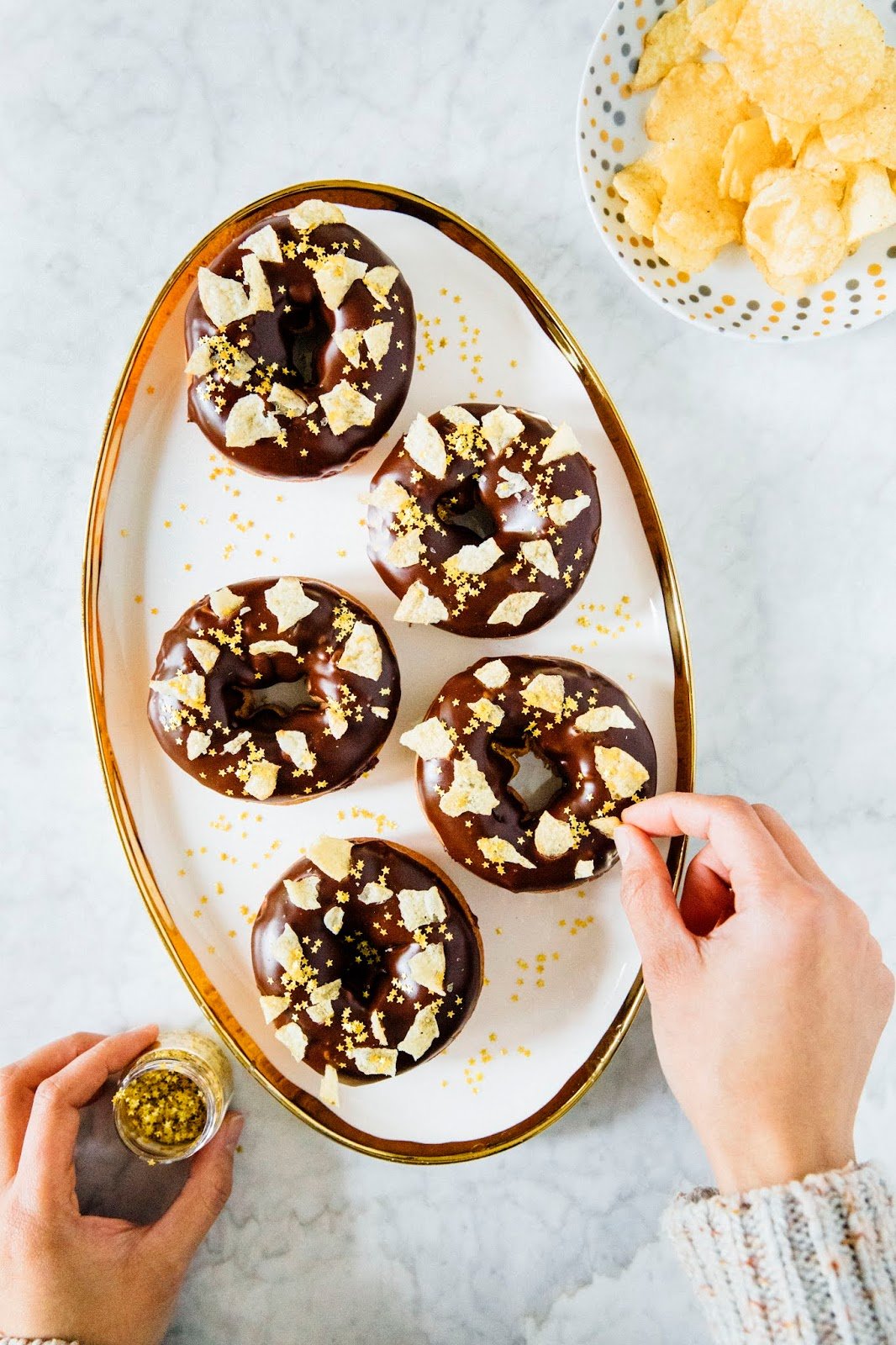 This post was sponsored by Kettle Brand, makers of THE BEST potato chips! One of my favorite things to do with Erlend is stay in, watch a movie, and share a bowl of Kettle Brand Sea Salt and Vinegar Potato Chips. We’ve literally been doing that every Friday night for the last five years, no joke. So I’m excited to find a way to use their products in my recipes! As always, all thoughts and opinions are my own, and thank you for supporting Hummingbird High and my awesome sponsors!

A few weeks ago, a new donut place opened up down the street from my house. It’s one of Portland’s most beloved donut shops, but between you and me, it’s never been my favorite — their donuts are expensive (usually $4 a pop!), dense and heavy, with flavors that are a little too cloyingly sweet or worse, bland. However, because of its good reputation, I always find myself giving them a second chance. I’ve spent the last week (and over $30, to boot) picking at fancy gourmet donuts I can’t ever get myself to finish. 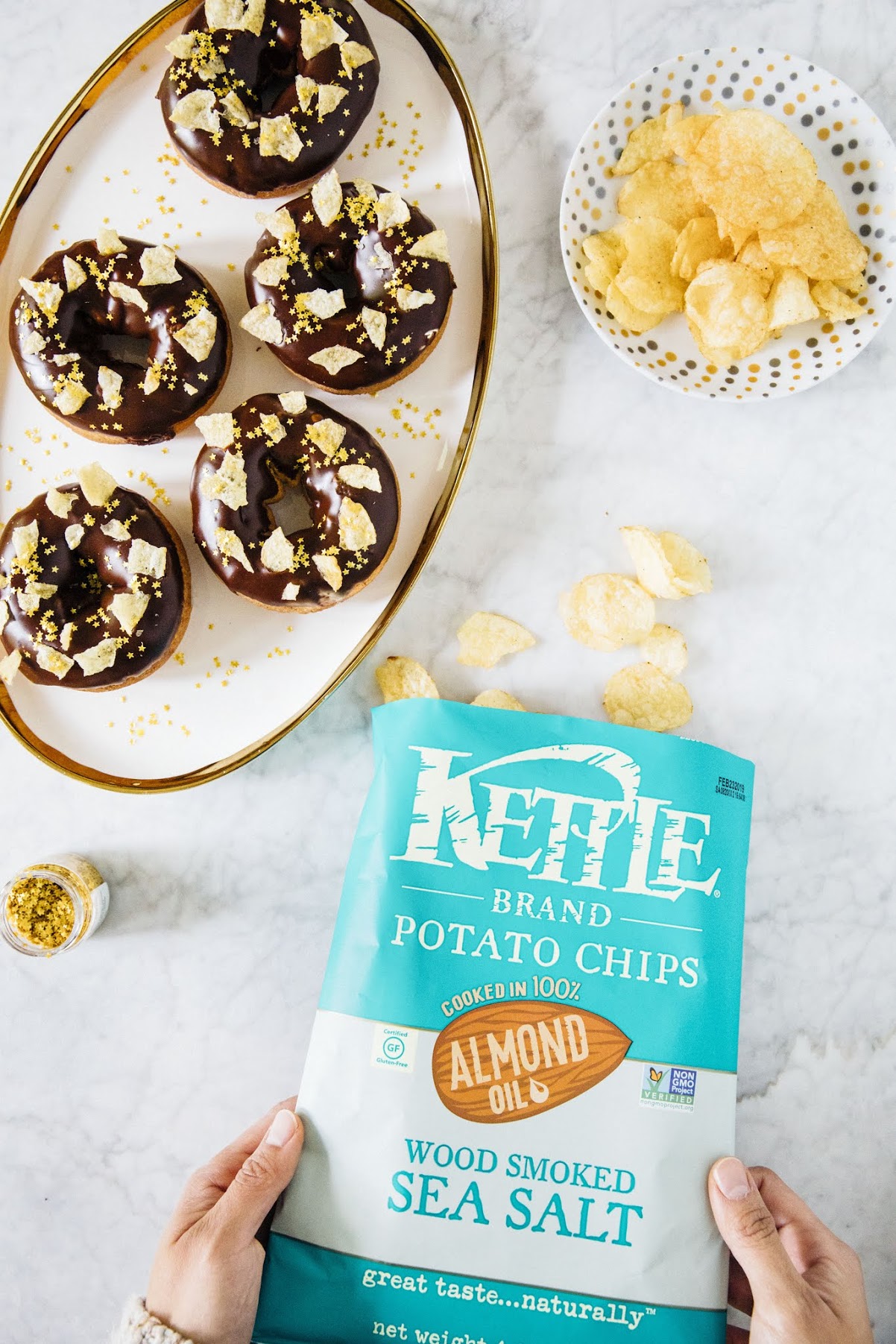 A good donut should have flavors and toppings that should complement but don’t overwhelm the classic bread-y flavor of a donut. It should also light and fluffy, unless we’re talking about cake donuts — these should have a texture similar to your favorite sour cream cake but with a crispier crumb.

Truth be told, cake donuts are often trickier to nail than the already challenging yeasted donut. Most folks choose a shortcut by picking a beloved cupcake or muffin recipe and baking it in a donut pan — while I’ve done that in the past, it mostly just tastes like a ring-shaped cupcake and never results in the texture of the cake donuts you buy in donut shops. What gives! 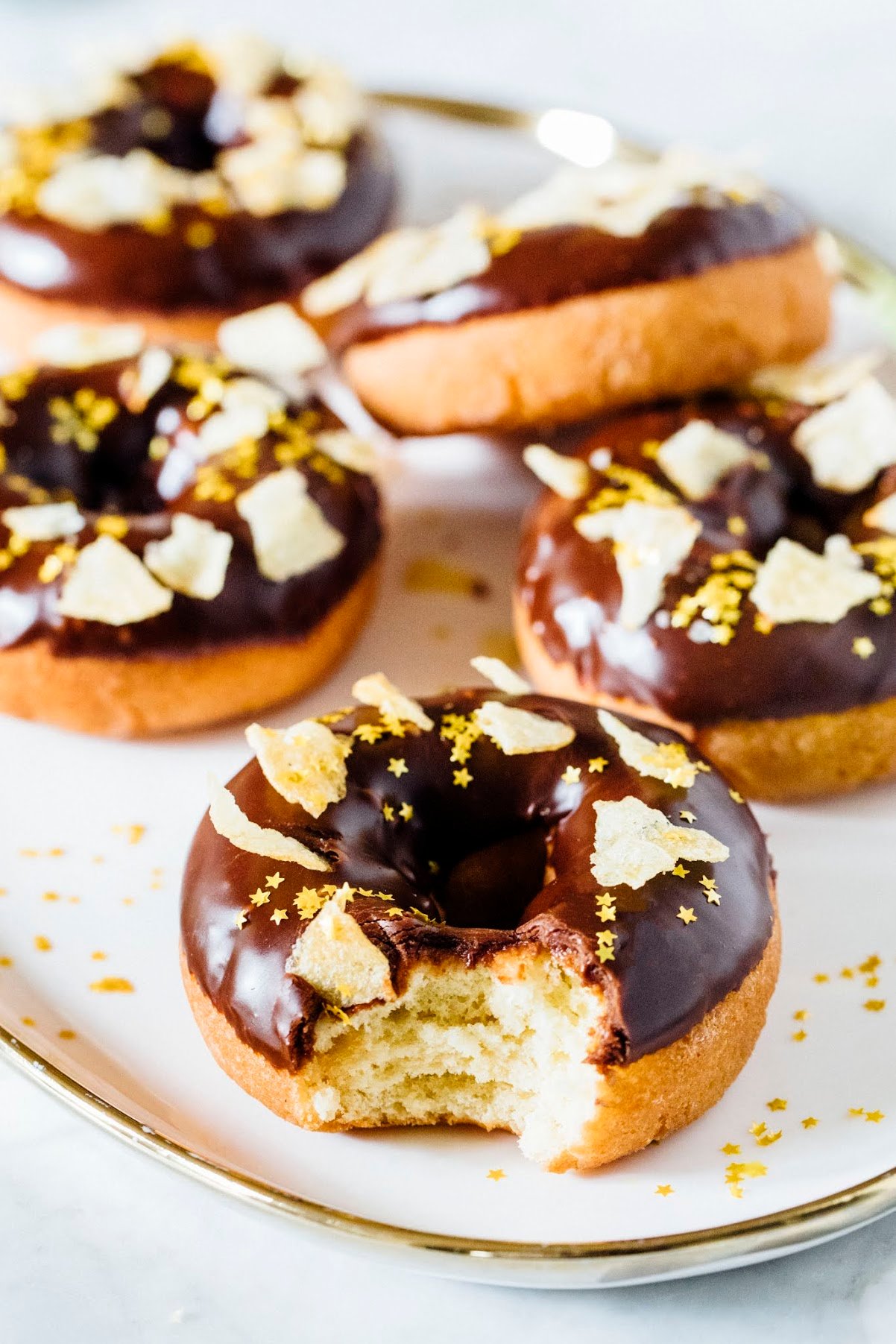 After digging around, I found a recipe for traditional cake donuts in an old cookbook specifically dedicated to the pastry itself. It turns out that cake donuts are made using a technique very similar to the one used when making crullers: the batter is put in a piping bag, piped into circles on parchment paper squares, and fried. While I was initially skeptical about the technique (it’s much fussier than I would like), it does result in a true cake donut. In fact, when I brought these over to a friend’s holiday party, people didn’t believe they were homemade and insisted that I’d bought them at the new donut shop down the street!

It was only after a quick Google search and confirmation that no, the bakery did NOT indeed make chocolate potato chip donuts, that my friends finally believed these were homemade. And between you and me, they’re much better than anything you can buy there, with a deep, dark chocolate glaze complemented by the smokiness and a hint of almond flavor from Kettle Brand Almond Oil Wood Smoked Sea Salt Chips. If you’re weirded out by the idea of using potato chips in a dessert, don’t be! Think of potato chips as a way to cut through the richness of strong sweet flavors, similar to how flaky salt is often used in salted caramel desserts or chocolate chip cookies. They’re the secret ingredient that your baked goods have been missing, I promise. 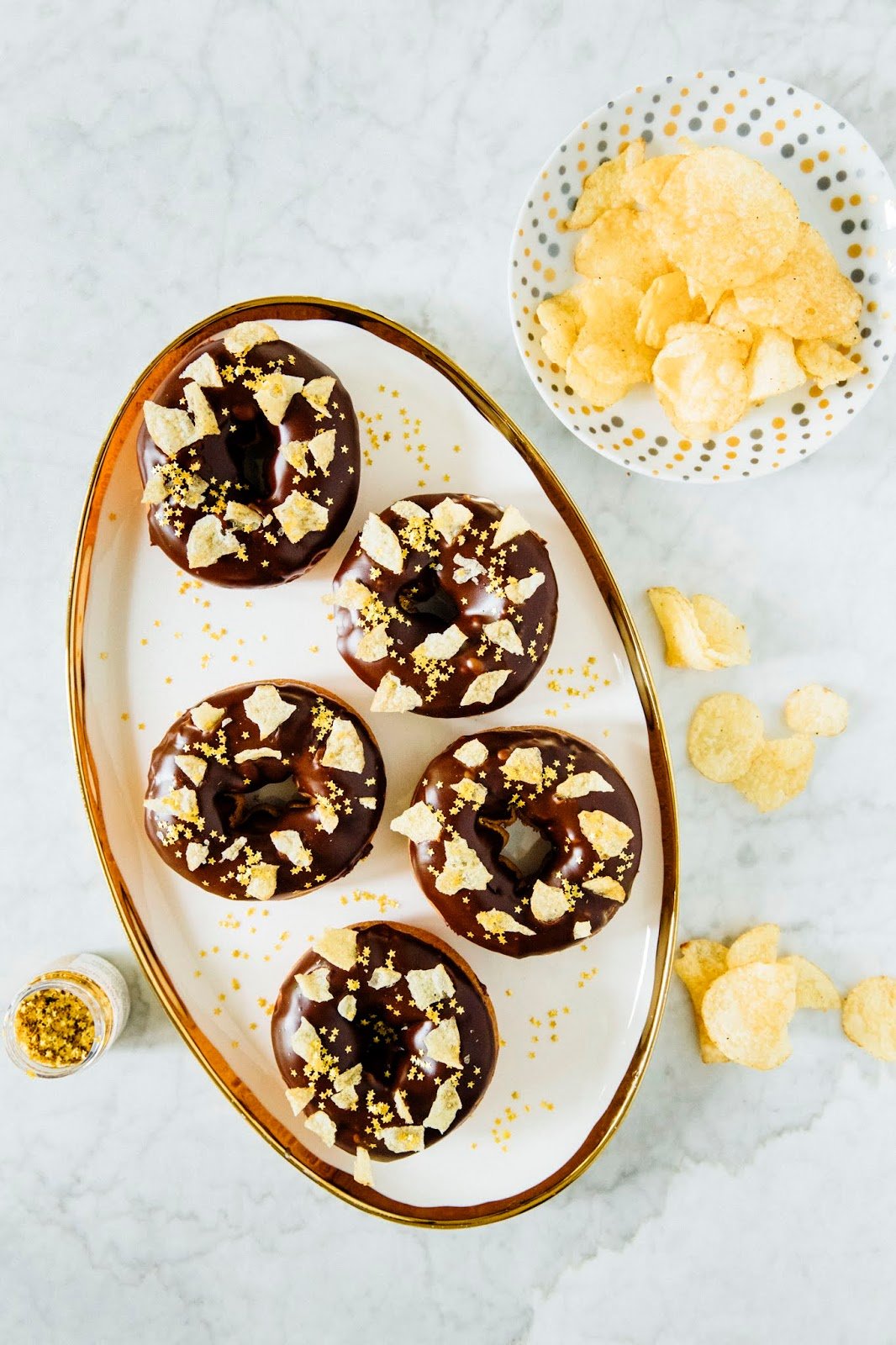 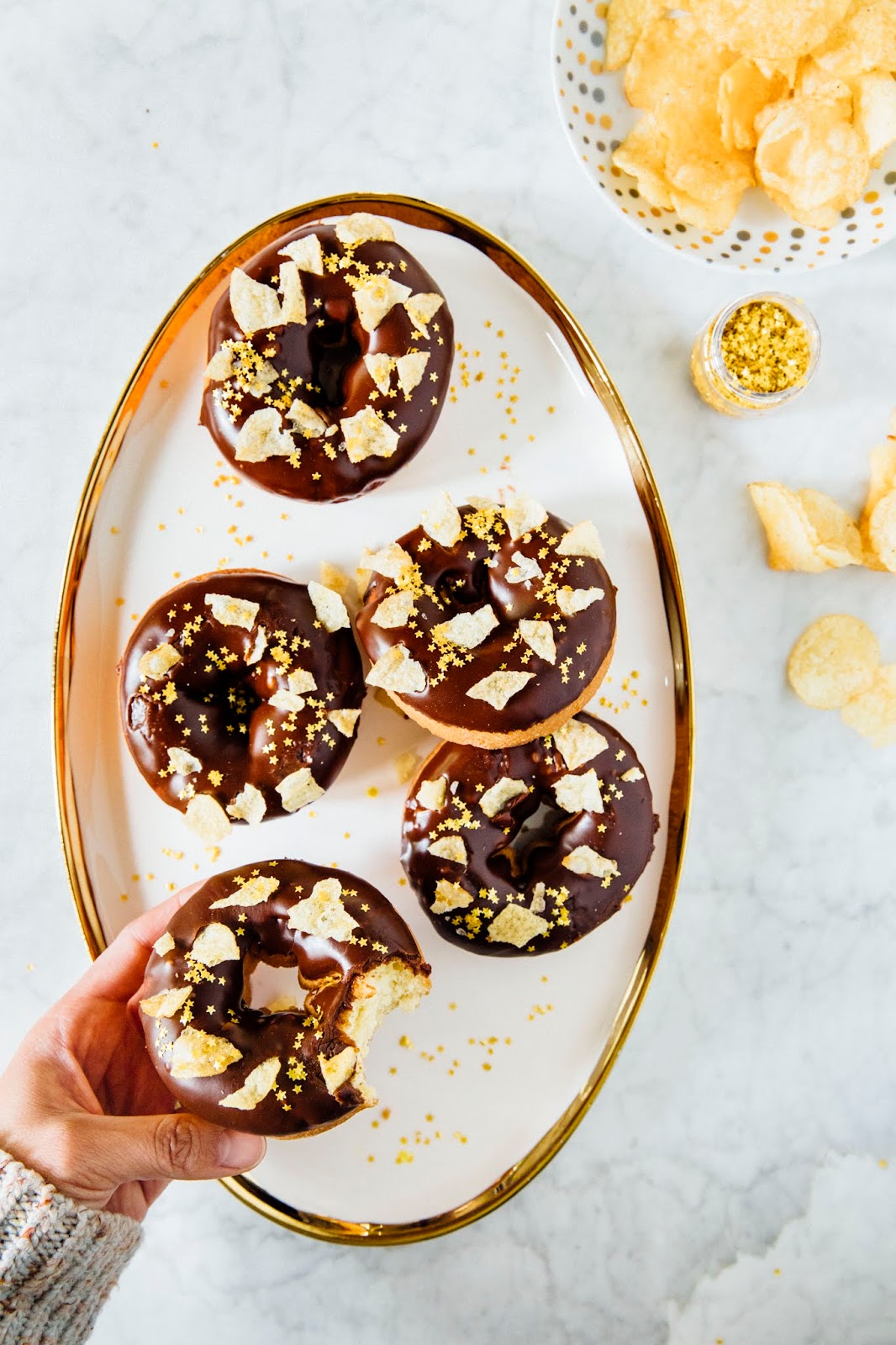 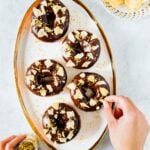 For the Chocolate and Potato Topping

For the Chocolate Glaze and Assembly 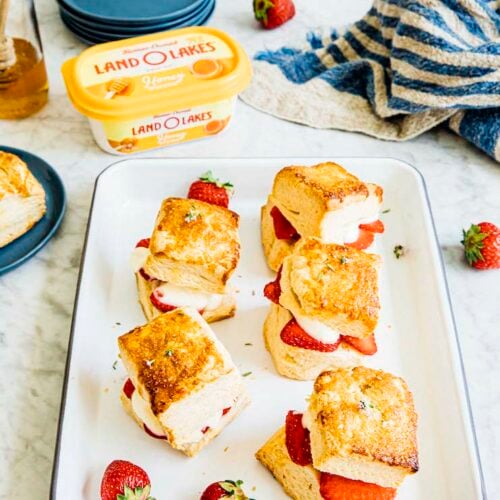 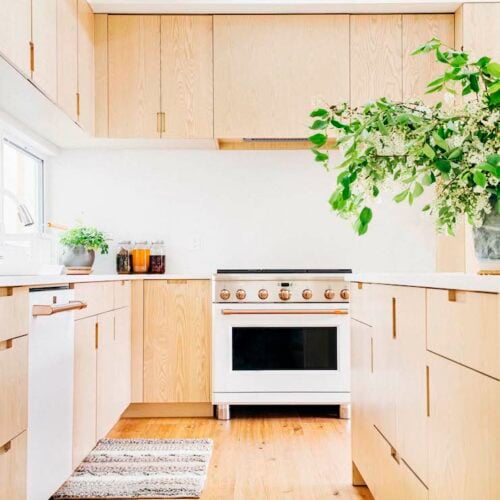