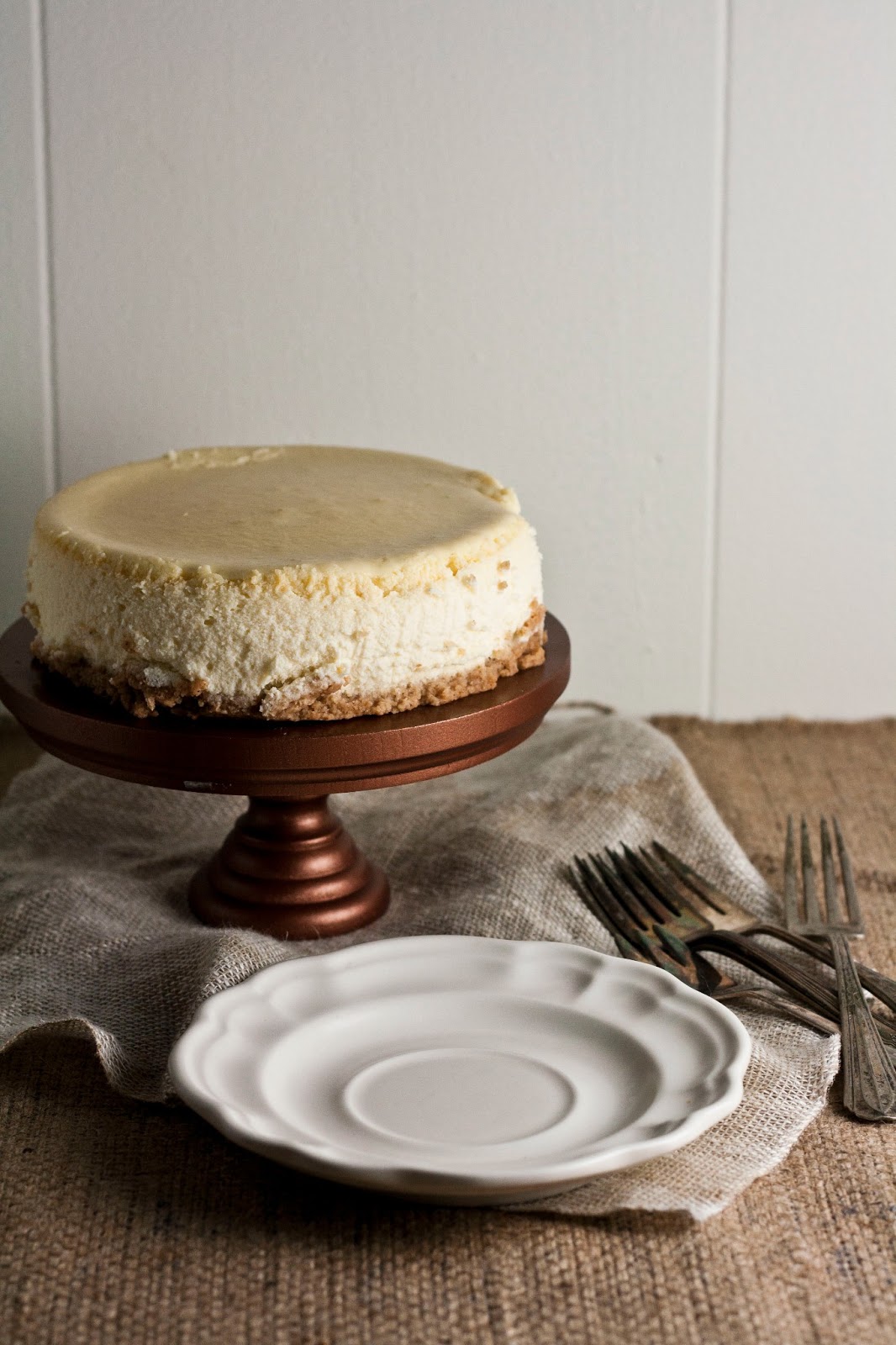 Aside from the fact that this cheesecake has a crust made from homemade honey graham crackers, there’s something else remarkable about it. Specifically, let’s take a closer look at the cheesecake:

Well, let’s take a quick poll. How many people here have made what they thought would turn out to be a beautiful cheesecake, only to pull it out of the oven and be greeted with a cracked and puffy top? I know I have. Last year, after laboring for hours on a cheesecake for Thanksgiving dinner with my boyfriend’s family, I was disappointed when I pulled it out of the oven. The cheesecake was overinflated and puffy, completely opposite from the smooth and creamy cheesecake I had expected! What’s worse, as the cheesecake cooled, giant cracks appeared on top of the cake. I had to scramble last minute and hide the top with mixed berries and rose petals. It tasted delicious, admittedly, but cheesecakes are supposed to be beautiful. Wasn’t there a recipe that could be both? One that could produce a creamy and delicious flavor, with a perfectly smooth and unblemished top? 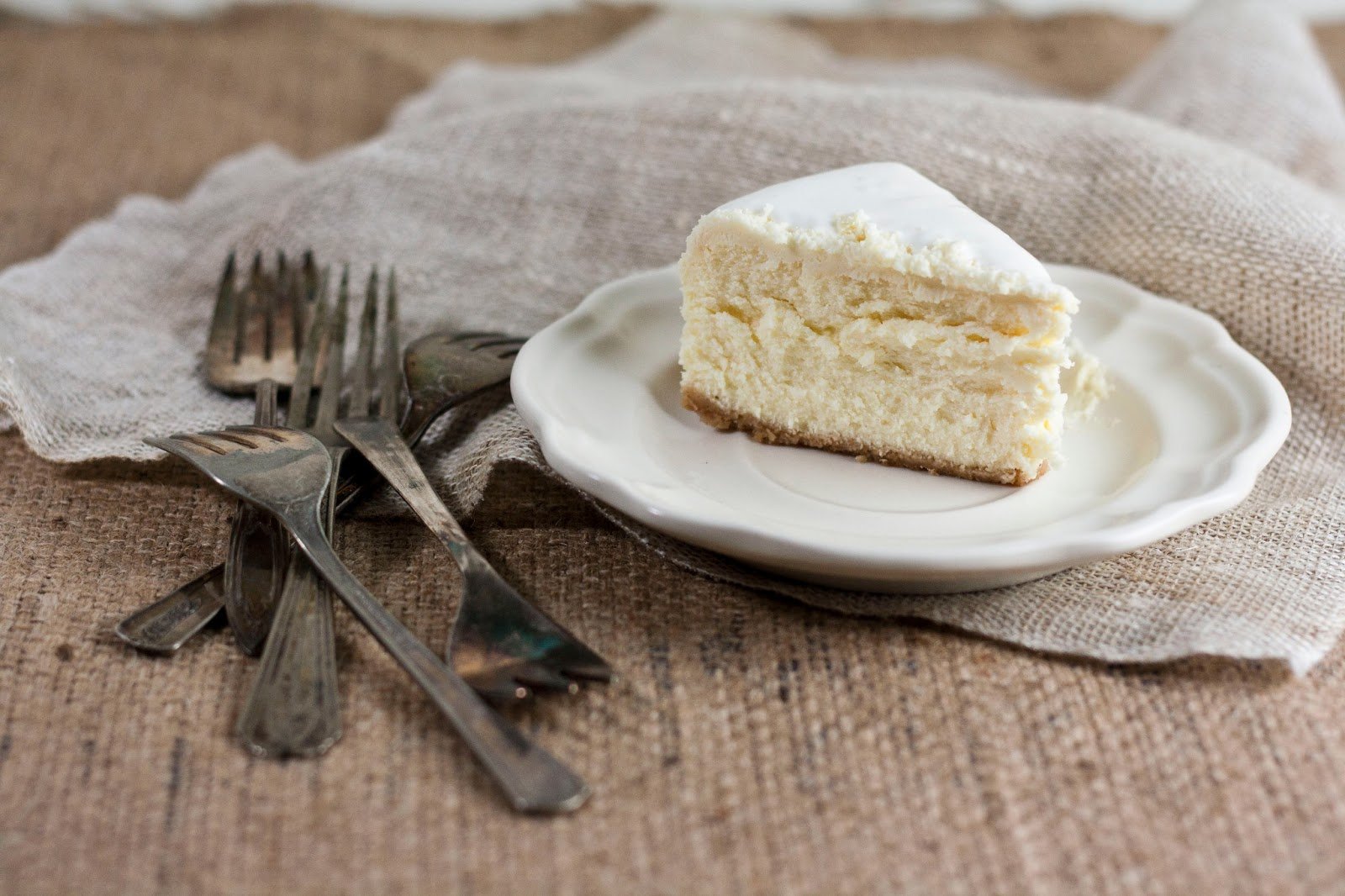 So, I rolled up my sleeves and started googling up a storm. There was a LOT of advice out there on how to get the perfect cheesecake. The advice ranged from sensible (make sure all your ingredients are at room temperature so that they fully incorporate with one another during the mixing process) to flat-out ridiculous (specifically, somebody out there has a theory that smooth cheesecakes are actually just frozen custards???). Feeling overwhelmed, I decided to take a look at popular cheesecake recipes. And that’s when I started to notice patterns.

The other constant I noticed throughout the recipes was their emphasis on NOT overmixing the batter. Overmixing causes too much air to enter the batter — it’s the same air that tries to escape during the baking process and cause the cake to crack. Most cheesecakes involve a creaming process with the cream cheese and sugar before adding the eggs. The creaming process incorporates air into the cheesecake, so it’s important it still gets a good creaming process to give the cheesecake a light and fluffy texture. But don’t overbeat the batter once adding the eggs — that’s where the danger really is. Simply beat the eggs on a low speed only until they’ve been incorporated, making sure to stop the mixer once they have.

With this in mind, I decided to try a cheesecake recipe from Miette. Not only was Miette one of San Francisco’s most beloved pastry shops, their recipe for cheesecake was simple and emphasized both values I described above. It was no surprise that the cheesecake came out beautifully. Despite the fact that the cheesecake’s top had no blemishes to hide, I decided to follow the recipe’s instructions and top it off with a sour cream glaze. I was not disappointed — the sour cream was perfectly tart and creamy, a great complement to the cheesecake’s rich flavor and fluffy texture. 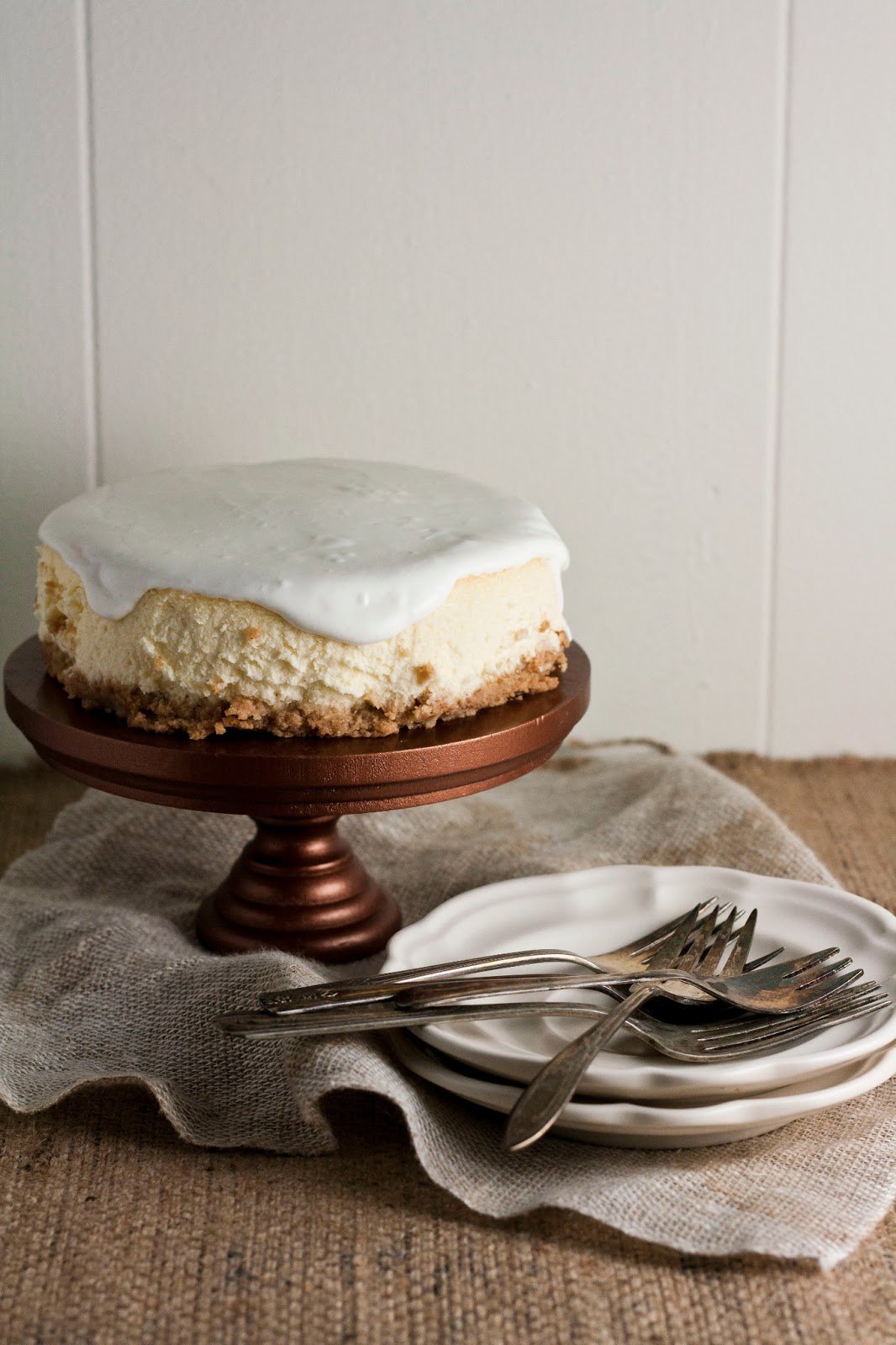 Note, however, I use the word “miniature” to describe the cheesecake recipe. Miette is famous for making small cakes; for instance, this cheesecake is baked using a 6-inch springform pan. Six inches is a modest amount – my boyfriend and I finished nearly three-quarters of the cake in one sitting. Great for your waistlines, but maybe not your appetite. Because believe me when I say you’ll want as much of this cheesecake as you can get. From the homemade honey graham cracker crust to the perfectly smooth top, this cheesecake is a dream come true. 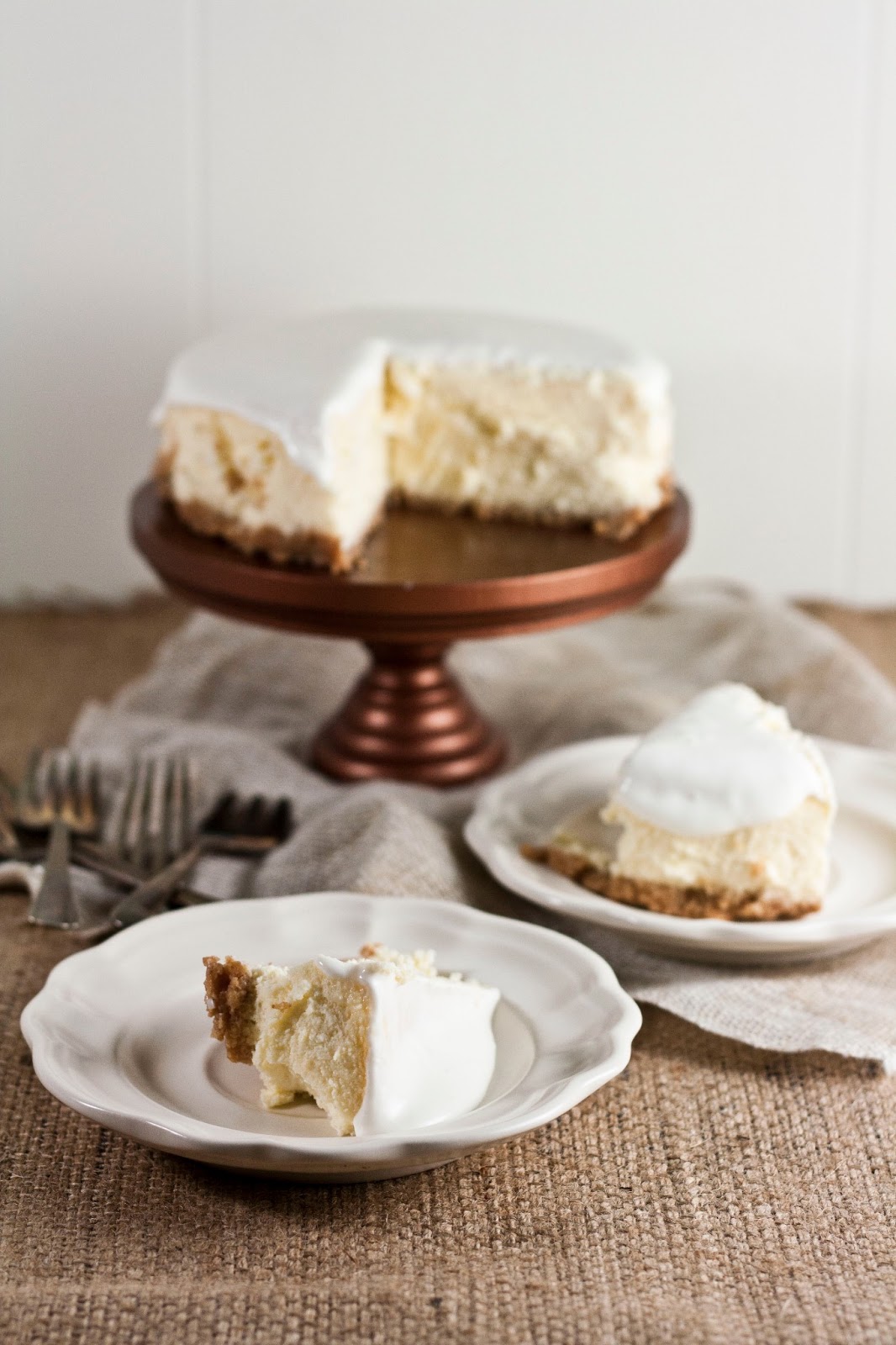 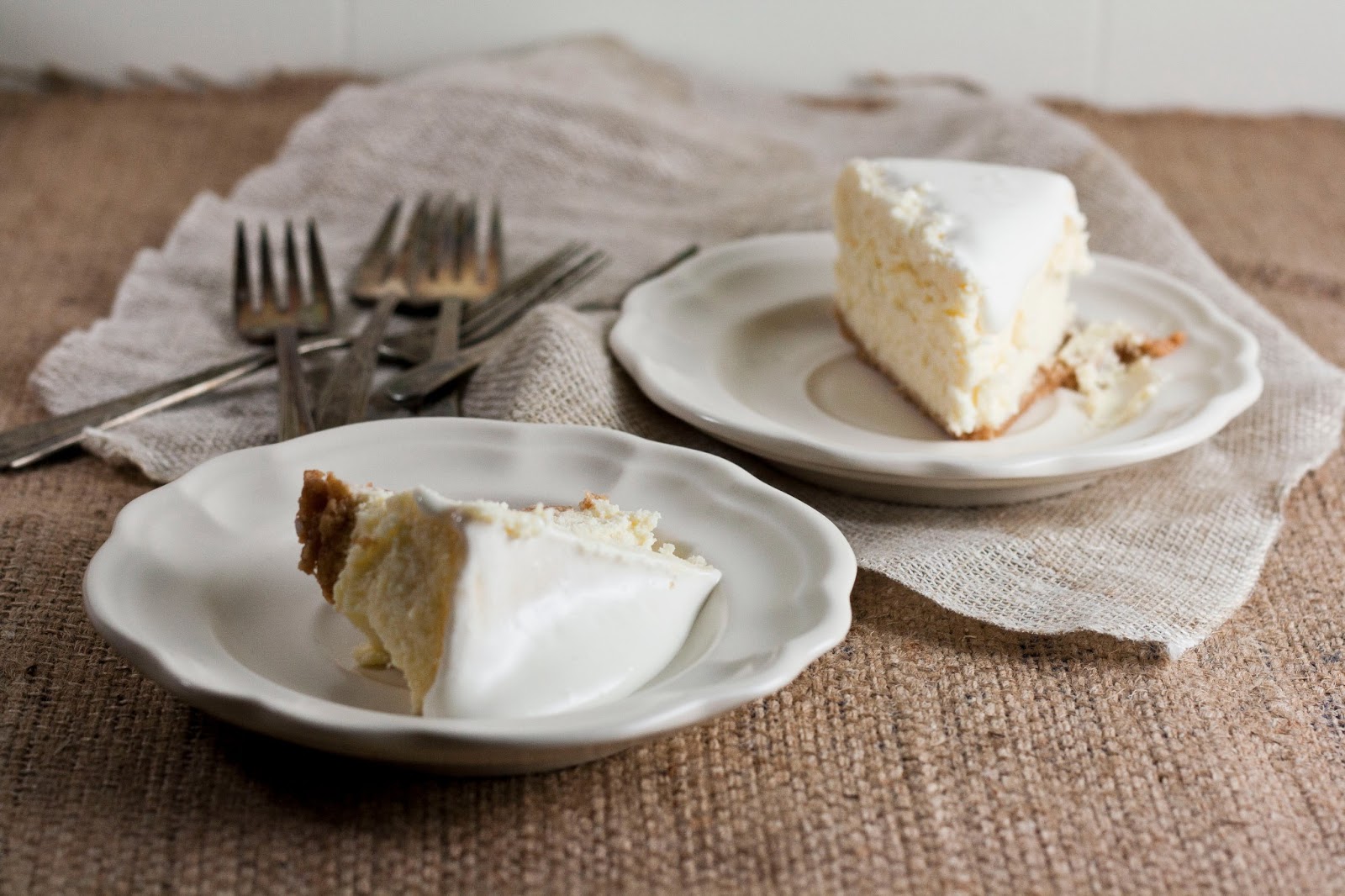 For the Sour Cream Glaze

For the Sour Cream Glaze