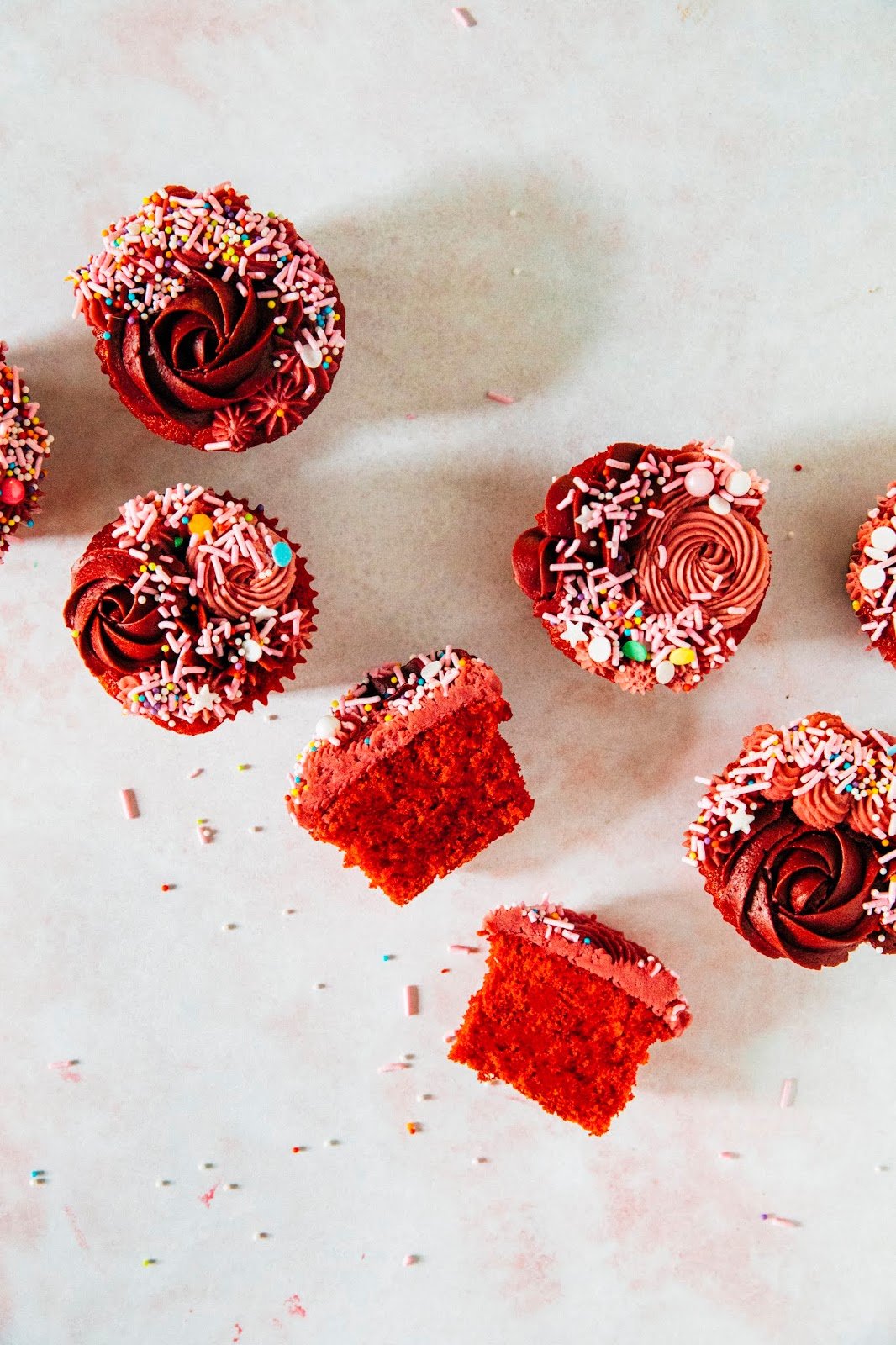 This red velvet cupcake recipe is adapted from my new cookbook, Weeknight Baking, and is made modern with a hint of cocoa powder and orange zest—jump to the recipe! The red velvet cupcakes are then decorated with a fancy orange blossom-flavored Swiss meringue buttercream frosting in celebration of my blog’s eight birthday. Cheers! Happy EIGHT birthday to […]

This red velvet cupcake recipe is adapted from my new cookbook, Weeknight Baking, and is made modern with a hint of cocoa powder and orange zest—jump to the recipe! The red velvet cupcakes are then decorated with a fancy orange blossom-flavored Swiss meringue buttercream frosting in celebration of my blog’s eight birthday. Cheers! 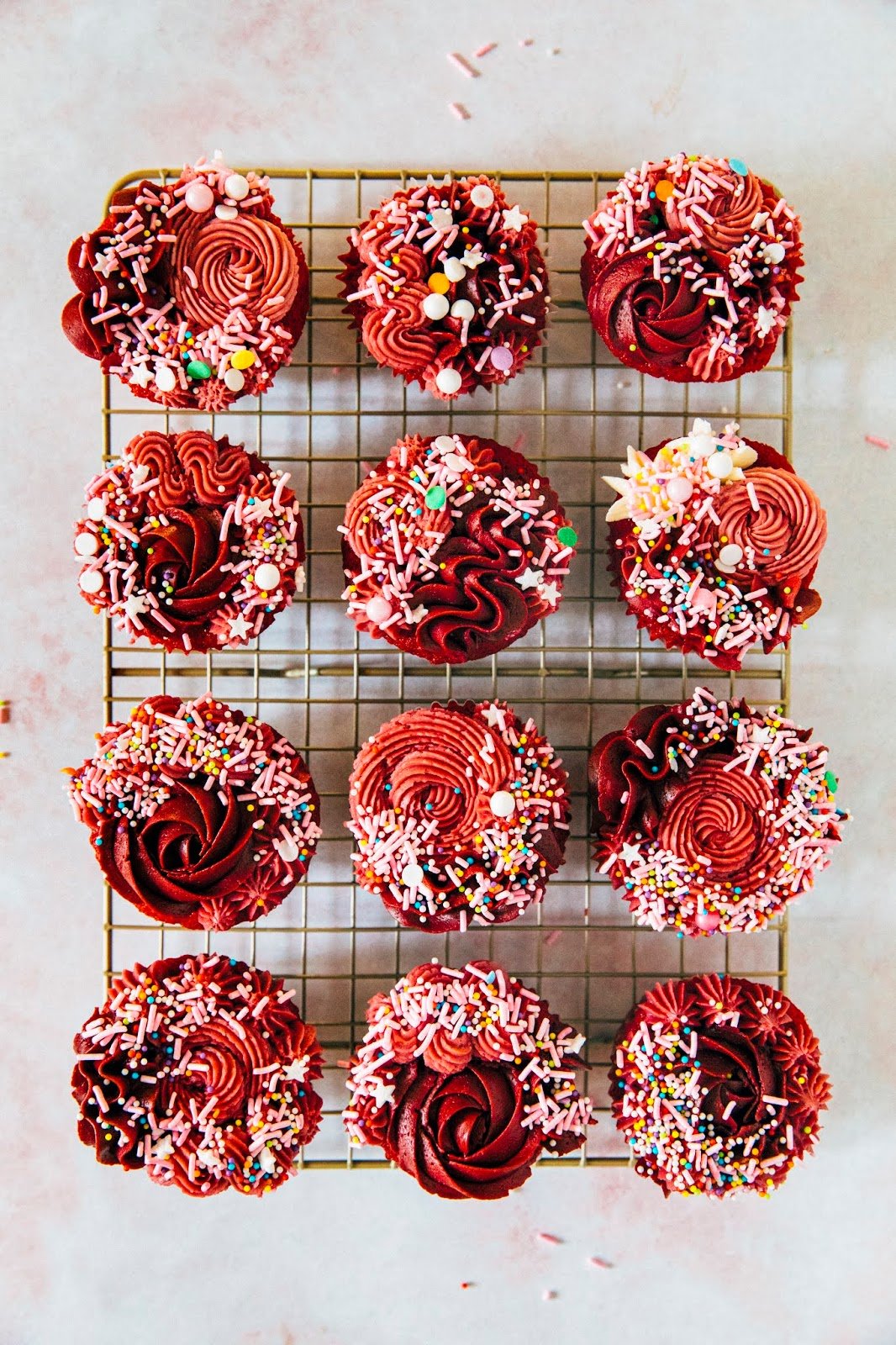 Happy EIGHT birthday to Hummingbird High! It’s hard for me to imagine that, eight years ago, I randomly popped open my laptop and created this space from scratch. Since then, a LOT has happened. I’ve lived in eight different apartments/houses (including one of my own!), moved to Portland, San Francisco, New York, and back to Portland again, and held three different jobs in both finance and tech before quitting to blog full-time and write a cookbook (that came out last week!).

But I’m not going to lie—I procrastinated writing this post. It was not for lack of things to say; my initial plan was to have this post complete my #tenyearchallenge series and focus on me and Erlend’s relationship (our unofficial TEN YEAR anniversary was last month). But then I started reading anniversary posts from previous years, and got particularly hung up on this post (featuring a really delightful-looking ube layer cake!) from last year and the year before (with a really pretty hummingbird cake, too).

In those posts, you can see my anxiety about the longevity of Hummingbird High. Although I still very much love this space, I find myself thinking about how much longer it’s going to last on an almost daily basis. Because the blog world has changed dramatically in the last eight years. While I love to bake and will always continue to do so, blogging is a different matter entirely—over the last few years, the act of “blogging” has definitely shifted from “writing about the thing you love doing” to things like “how to monetize your passion”, “how to grow your audience and social media following”, and “how to write for SEO”. Still a worthy endeavor, sure, but definitely less about baking and food (you know, the things that drove me to blogging in the first place).

I thought that writing a cookbook would help capture and bottle the magic of those early years of blogging—and in many ways, it did! As opposed to focusing on the business development aspect of blogging, my days instead were filled with developing recipes and staging and planning photoshoots. I worked my butt off, dedicating the last few years of my life to making Weeknight Baking the very best it could be. And that made my anniversary post from last year especially resonant—in it, I tell you guys all about the big plans I had to potentially prepare myself financially for a future without Hummingbird High.

But the truth is, a year later, I literally have accomplished none of what I promised.

Almost all my energy went into Weeknight Baking instead. And while I’m very proud of the recipes in the book, I find myself wondering if that was the right decision I’d underestimated the amount of time, effort, and heart really needed to go into it all. And that was even with the understanding that the book was ultimately going to be passion project. In pouring all my resources into the book, I’d neglected, well… me. I am no closer to figuring out what’s next after Hummingbird High.

Maybe that doesn’t matter. Like I said last year, even if I stop relying on Hummingbird High as my primary source of income (like I did in the last two years), I’ll still be here, baking new recipes and sharing them with you no matter what. I started this blog because I genuinely love to bake; everything else—the blogging, the photography, the sponsored posts, the followers, and the cookbook even—has been a wonderful yet secondary privilege. My hope is that my love for baking, desserts, and all things sweet will keep Hummingbird High going for many years to come. 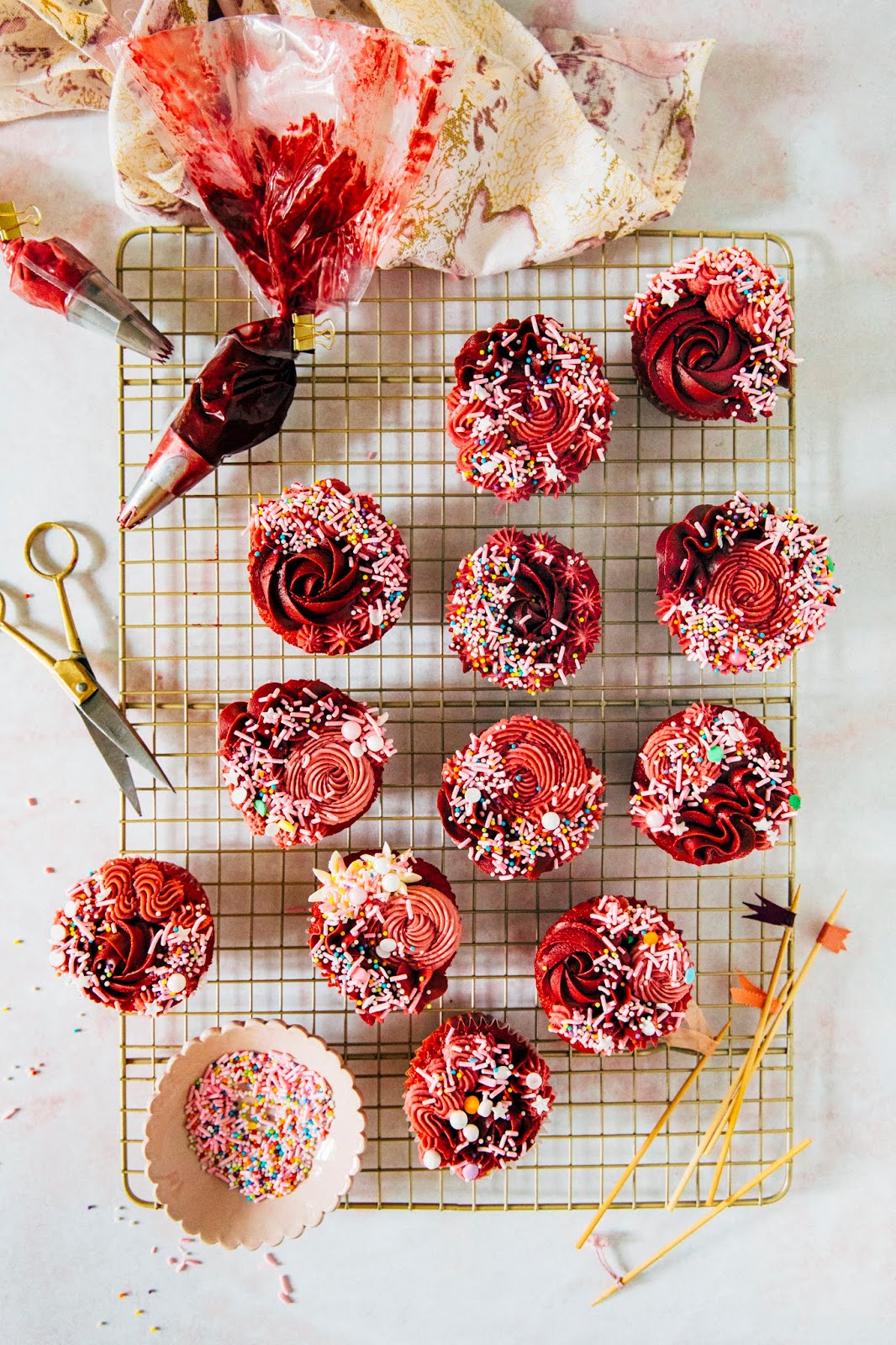 For my 21-year-old palette, Paula Deen’s recipe was the height of sophistication—they were made with lots of oil, butter, and cream cheese. With that much fat (seriously, look at how much oil is in that recipe, lol), anything is delicious! It was only later, in the summer after I’d graduated, that I had a slice of red velvet cake that then became my gold standard. I was in New York City for the summer visiting Erlend (we were not officially dating yet!) and he took me to a Morningside Heights BBQ restaurant that also offered slices of red velvet cake from a nearby Harlem bakery. The BBQ wasn’t very good, but the red velvet cake was no other: incredibly moist with deep notes of buttermilk, cocoa, and even orange zest. 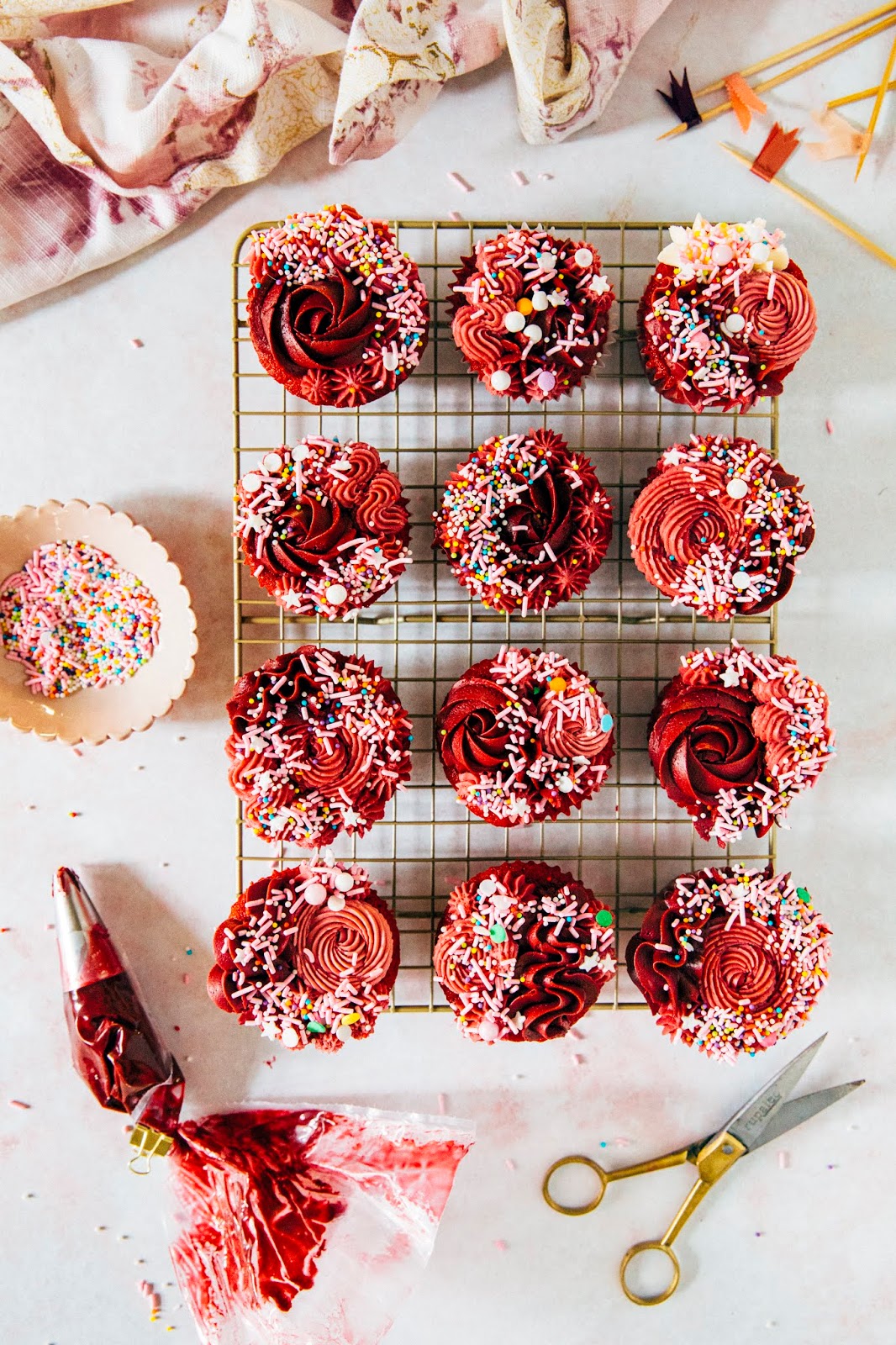 What flavor is red velvet?

It was that cake that I had in my mind when I was developing the red velvet cake recipe for Weeknight Baking. In the past, bakers used beetroot to naturally dye the cake its signature red color. However, when I tried incorporating beets into my recipe, I found that it tasted too much like vegetables (which is no bueno—you’re eating cake, after all)! I’ve also heard folks describe red velvet as a cross between chocolate and vanilla cake; some food historians argue that the red color comes from cocoa powder’s reaction to the buttermilk and vinegar in the recipe. This is what red velvet tastes like to me—mostly buttermilk and vanilla with just the slightest hint of cocoa. My own recipe only uses about 2 teaspoons of cocoa powder.

But of course, no red velvet cake is without a creamy frosting. Traditionally, red velvet cakes were topped with ermine frosting. Unlike traditional American buttercream frostings, ermine frosting is made by cooking flour, sugar, and butter together to make a roux (similar to the roux you make for casseroles, lol). I gave it a try a few years back and found that it was a lot of work without that much pay off. I recommend sticking to something like cream cheese or buttercream frosting instead.

Although I ordinarily prefer a simple American buttercream frosting, for these cupcakes, I used a fancier Swiss meringue buttercream. Swiss meringue buttercream is less sweet than its American counterpart and has a perfect silky, smooth texture that’s easy to pipe into shapes. For these cupcakes, I used a variety of tips and just piped swirls, spirals, and dollops at random. I didn’t really think about it too hard, but they still came out pretty cute! To complement the orange zest in the cake batter, I also flavored the extract with orange blossom water—but in a pinch, you can use vanilla or orange extract, too.

And finally, before I leave you with the baker’s notes, I wanted to include a photo of the first batch of red velvet cupcakes I made from scratch: 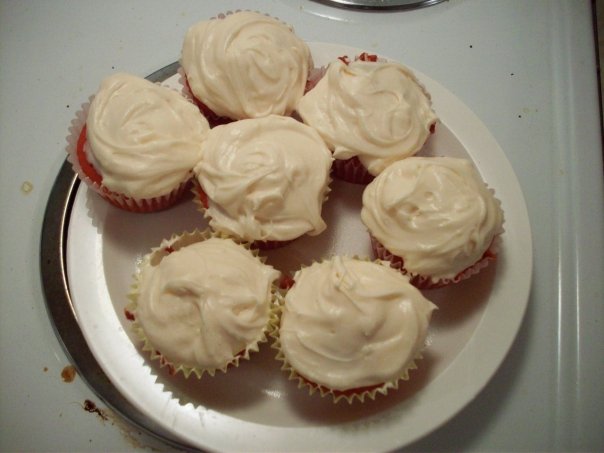 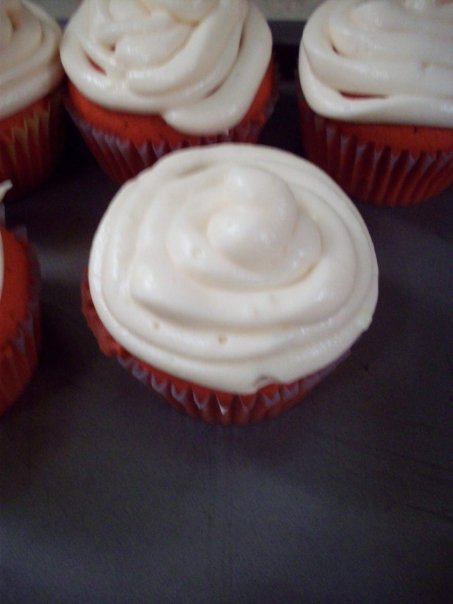 Like I said earlier, I made these cupcakes my senior year of college (a solid ten years ago!!!) using Paula Deen’s red velvet cupcake recipe. For the second picture, I even put some of the frosting in a Ziploc bag and cut off a corner to “pipe” the frosting! I was SO proud of them at the time (I posted these guys on FACEBOOK, lol), but let’s be honest—my red velvet cupcakes today (and my food photography!) are definitely a #glowup, lol. 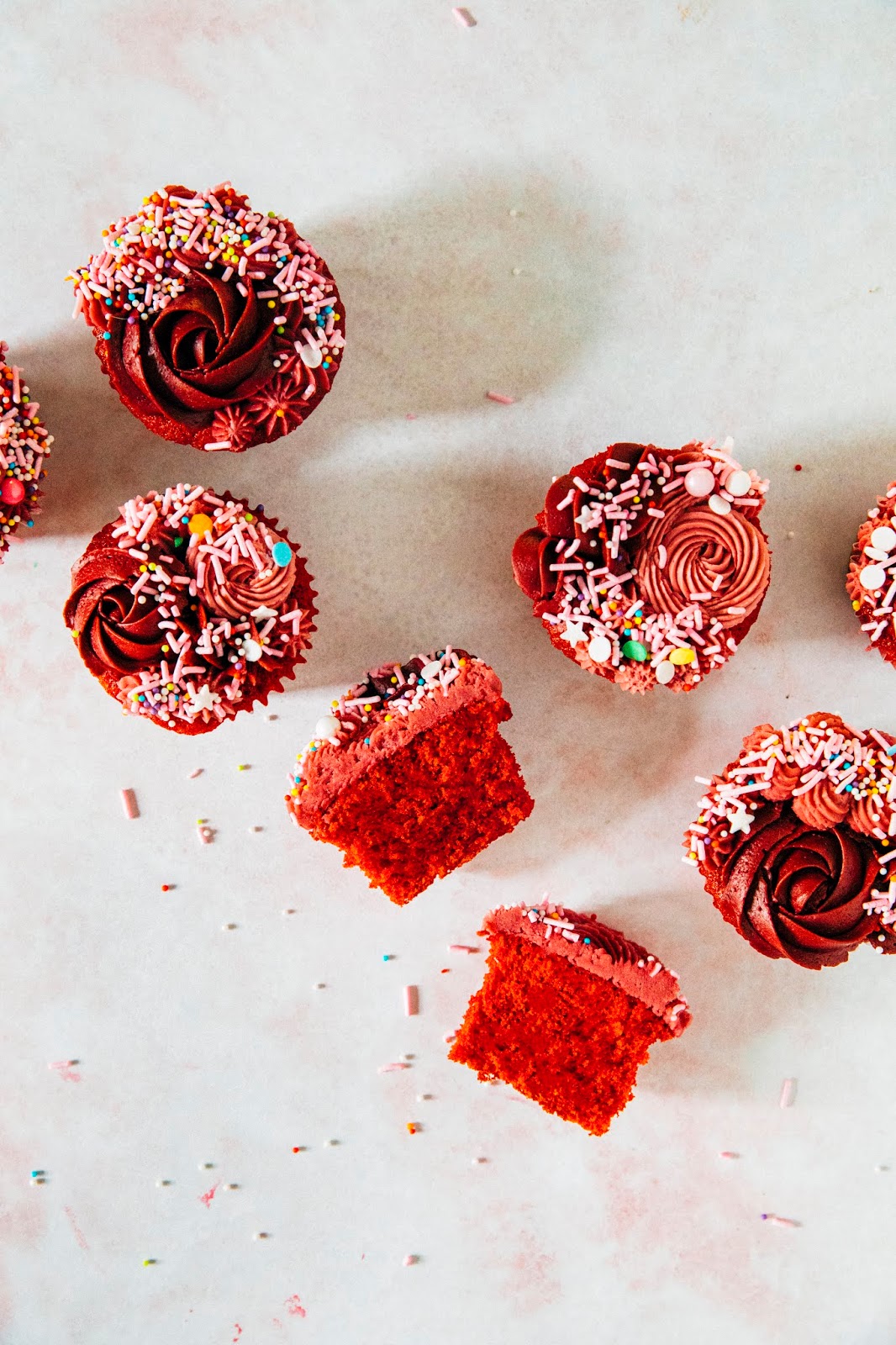 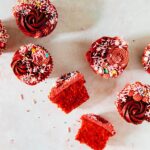 For the Red Velvet Cupcakes

For the Red Velvet Cupcakes