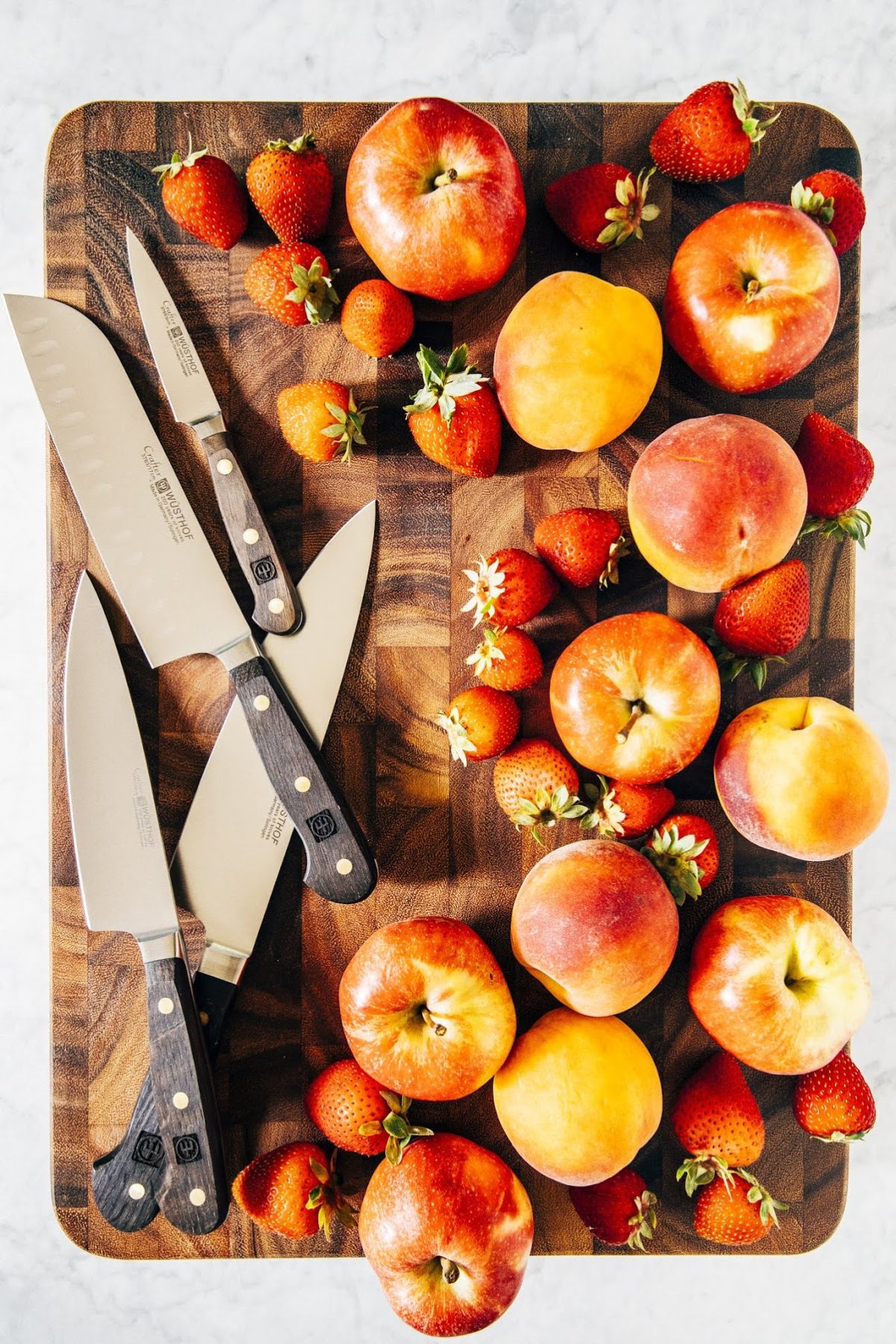 how to prep fruit for pies

I mentioned a few weeks ago that I wanted to start doing more things with this space, including more videos, tutorials, basics and other fun stuff. I’ll keep this intro short and sweet, but consider this my first official foray into basics! Get excited. For #weeknightbakingbook, I developed a pie recipe that allows you to […] 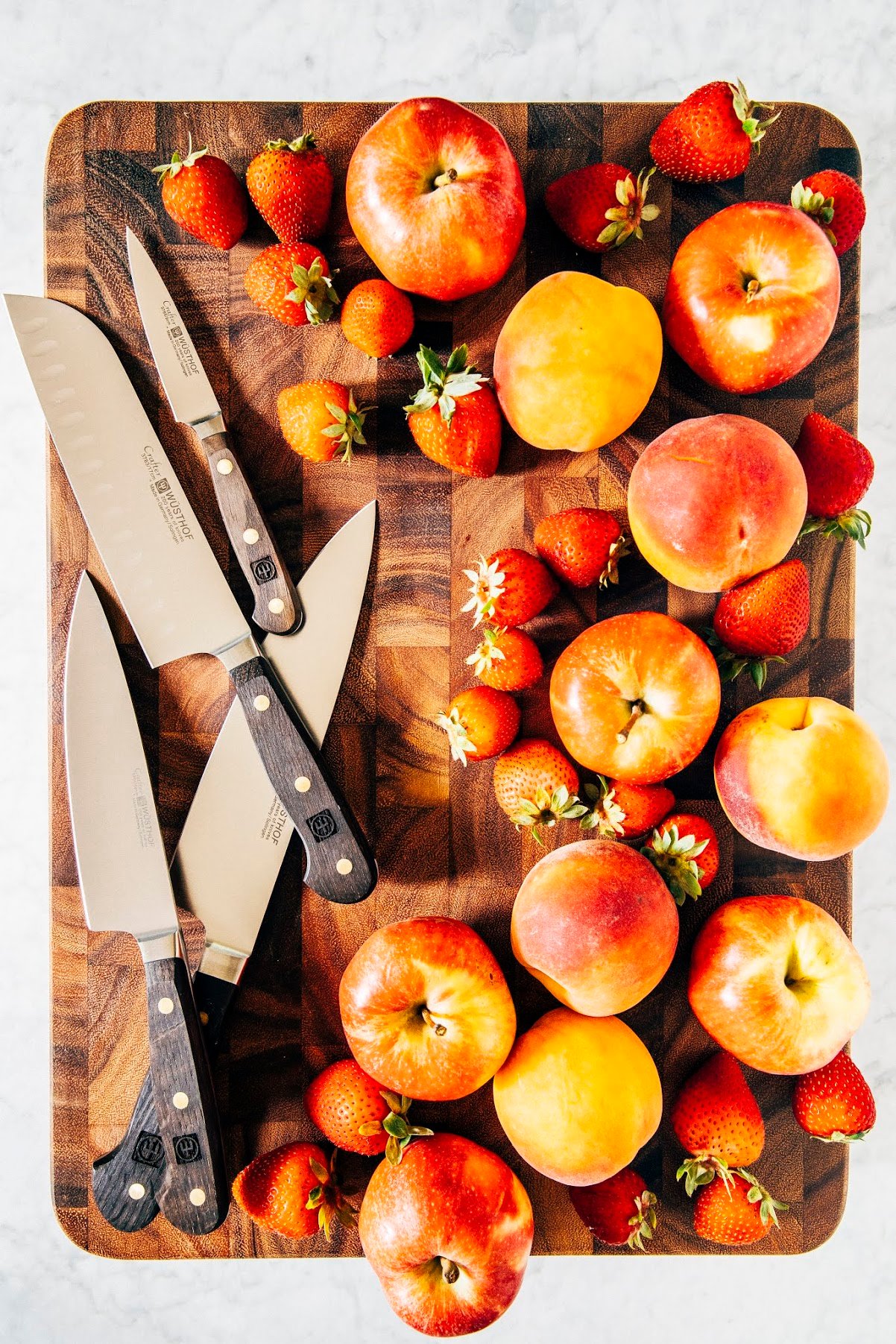 I mentioned a few weeks ago that I wanted to start doing more things with this space, including more videos, tutorials, basics and other fun stuff. I’ll keep this intro short and sweet, but consider this my first official foray into basics! Get excited.

For #weeknightbakingbook, I developed a pie recipe that allows you to use any kind of fruit that you want for its filling. The ingredients list calls for the fruit to be “washed, cored, and sliced into 1- to 2-inch chunks”. Later, as I was editing myself, it occurred to me that I was likely taking that knowledge for granted. Because just between you and me, it took me a long time (in addition to an incredibly helpful knife skills class at Williams-Sonoma’s test kitchen in San Francisco) to figure out how to prep various fruits for pies.

Below is a short (but hopefully helpful) guide on how to prep most fruit for almost any kind of pie recipe. Careful recipes will provide specifics in how to prep the fruit in advance, but in the event you find a recipe with vague instructions like “2lbs apples, sliced”, you can turn to this guide to help you out. 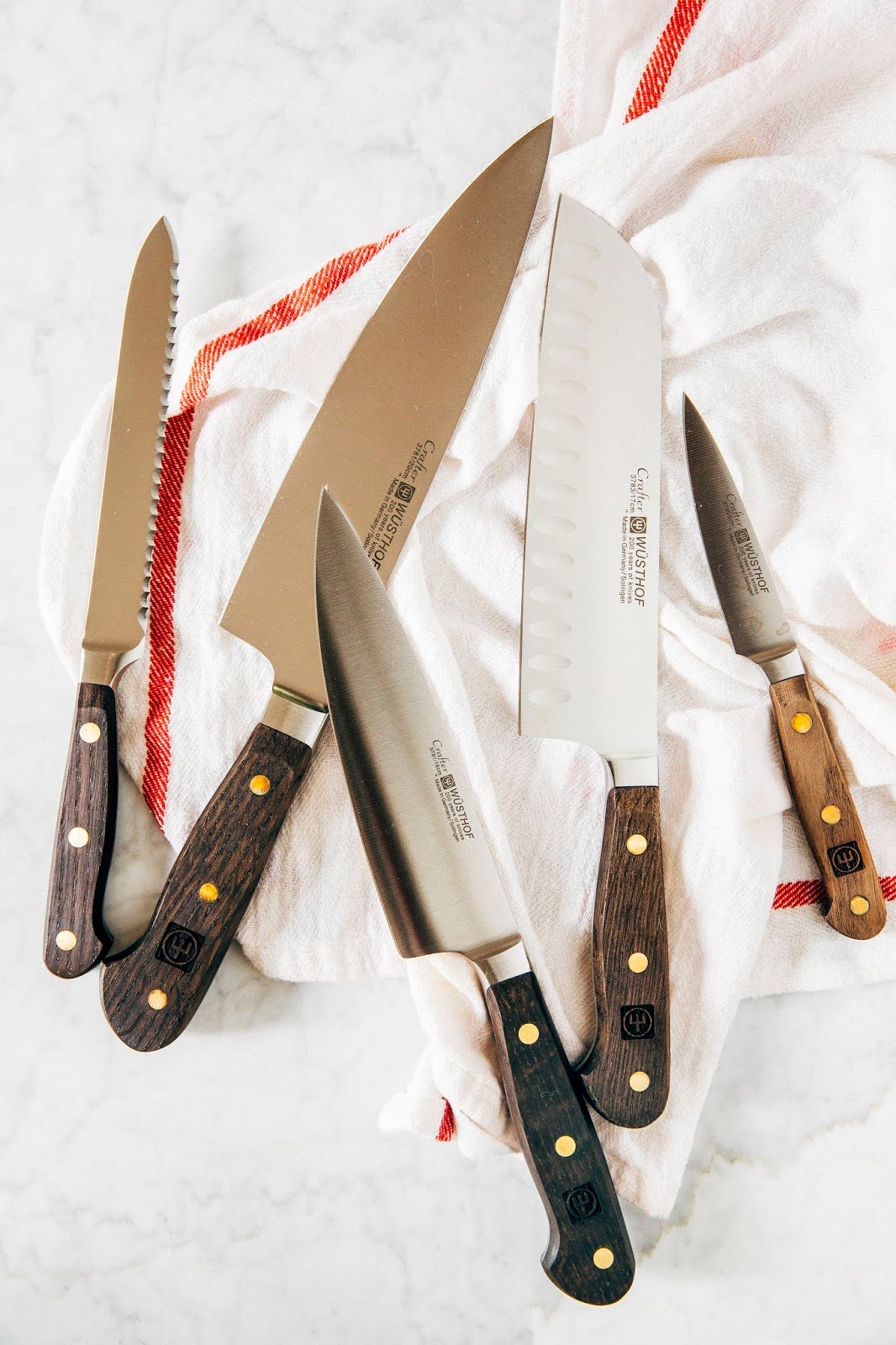 Although you can probably get away with just using a chef’s knife in your kitchen, I like to have a variety of knives on hand for different purposes. Serrated knives are good for slicing anything with a tough crust (think: rustic artisan bread) or anything mealy like tomatoes. Chef’s knives are good all-purpose knives but can usually be unwieldy since they usually only come in 8-inches or 10-inches — I like to have a smaller 6- or 7-inch one on hand for smaller produce. Santoku knives function a lot like chef’s knives, but are shaped differently and are easier to chop produce in rapid, short movements due to its shape. Paring knives are the smallest knife that can be used for produce and are good for micro tasks. 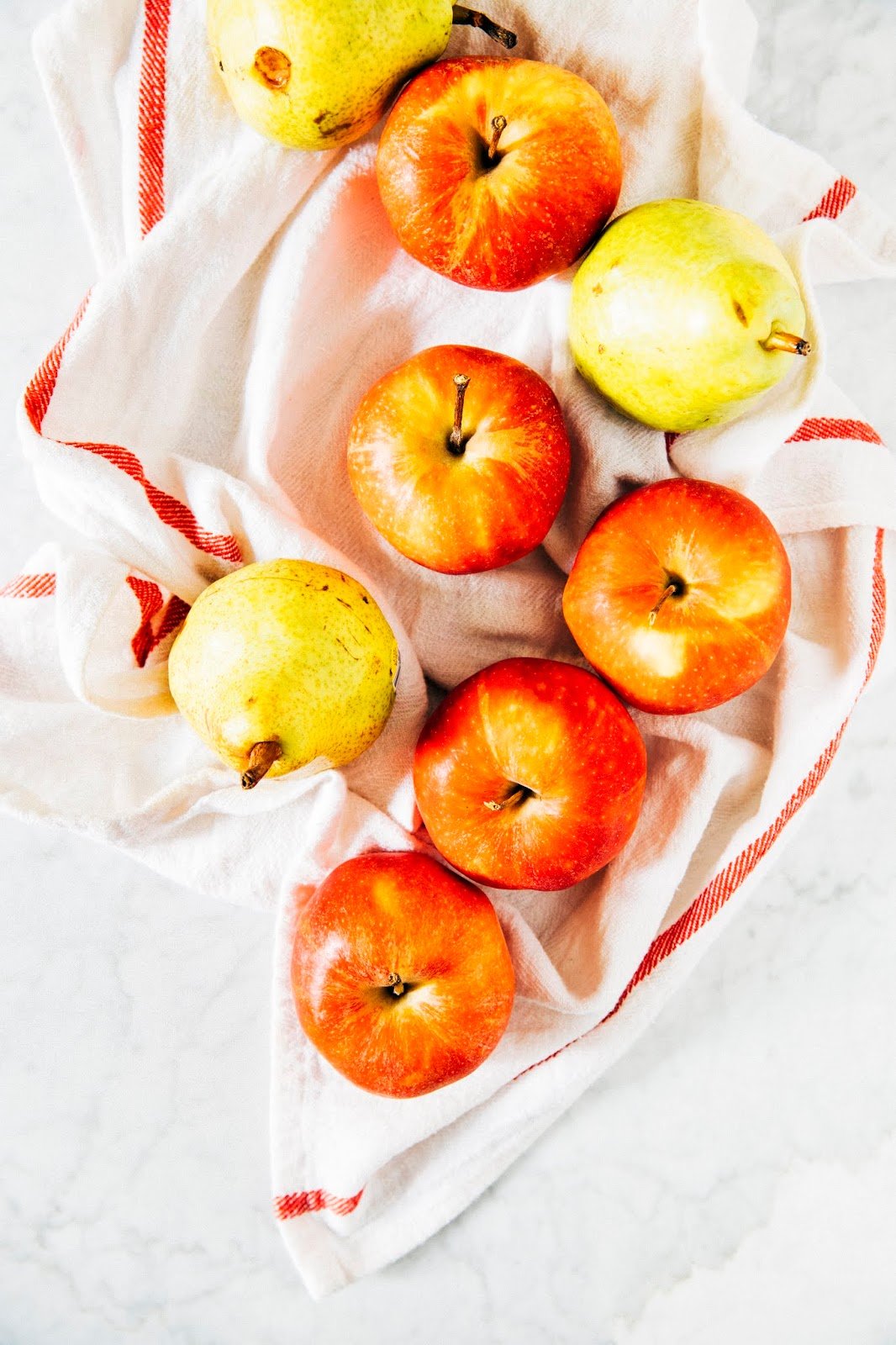 Pome fruits are literally any kind of fruit that has a core in the center. Some recipes call on you to peel and skin the fruit before using in a pie recipe; I always skip this step because I’m lazy, it’s time-consuming, and I find that leaving the skins on adds extra flavor, vitamins, and fiber to my already non-nutrient dense pie.

To prepare a pome fruit for pie, you’ll first need to remove its core. I do this by slicing the apple into four parts around its core:

Note that the parts of the apple don’t have to be even — we’ll get to that in the next step. For now, all you need to worry about is getting that core out of there and discarding it.
Once the apple has been sliced into four parts, take a look at each part. If there are some that are larger than the other parts, slice it lengthwise or in thirds so that the larger parts are equal in size to the smaller parts of the apple. At this point, you should have pretty even sized wedges. Gather the wedges so that they fit like a puzzle, forming half an apple with its cut side on the chopping board. Use your knife to slice the wedges either in half or in thirds; depending on the size of your apple, the former should result in 1 1/2- to 2-inch chunks, while the latter results in 1- to 1 1/2-inch chunks. I like a variety of sizes for more texture in the pie. 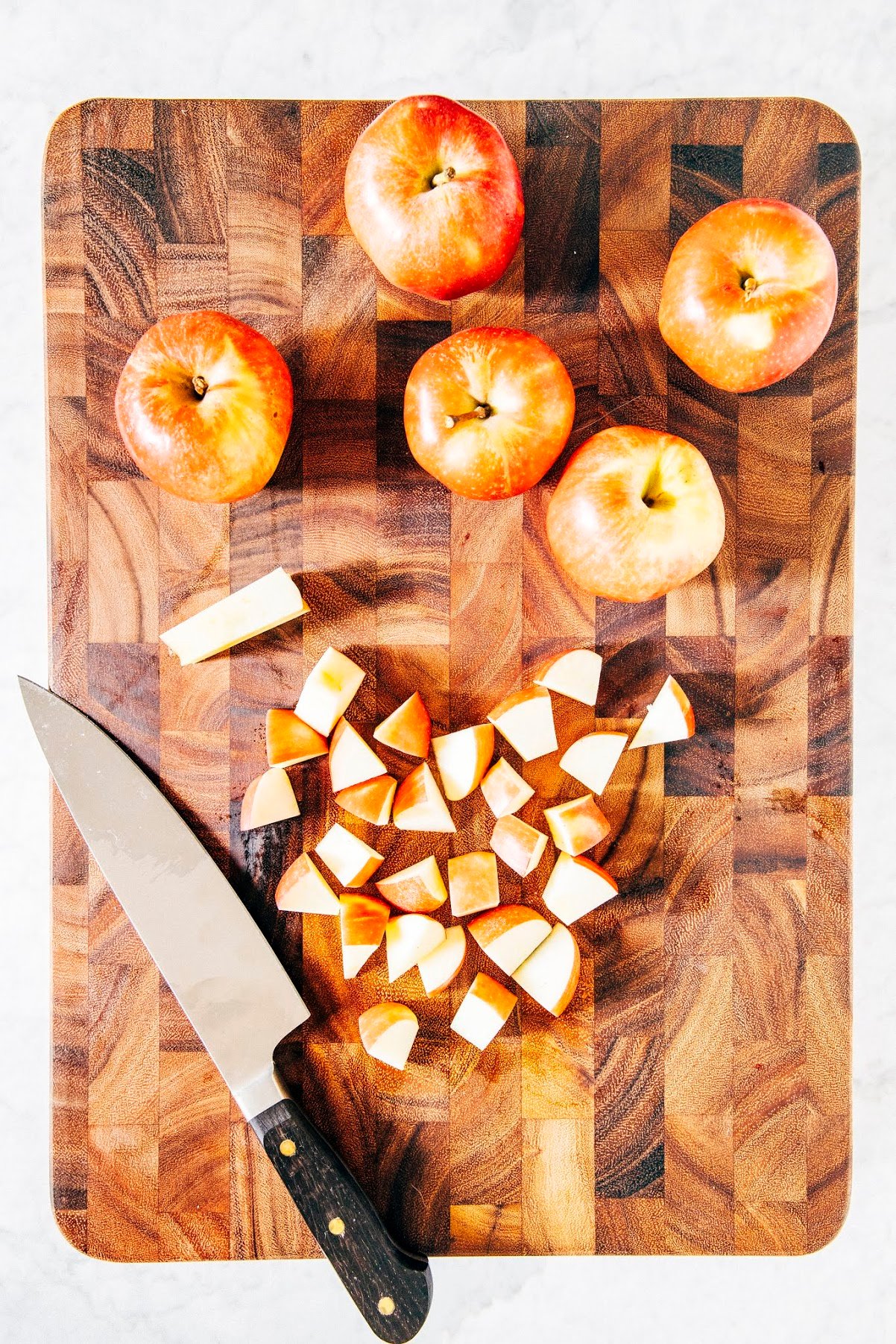 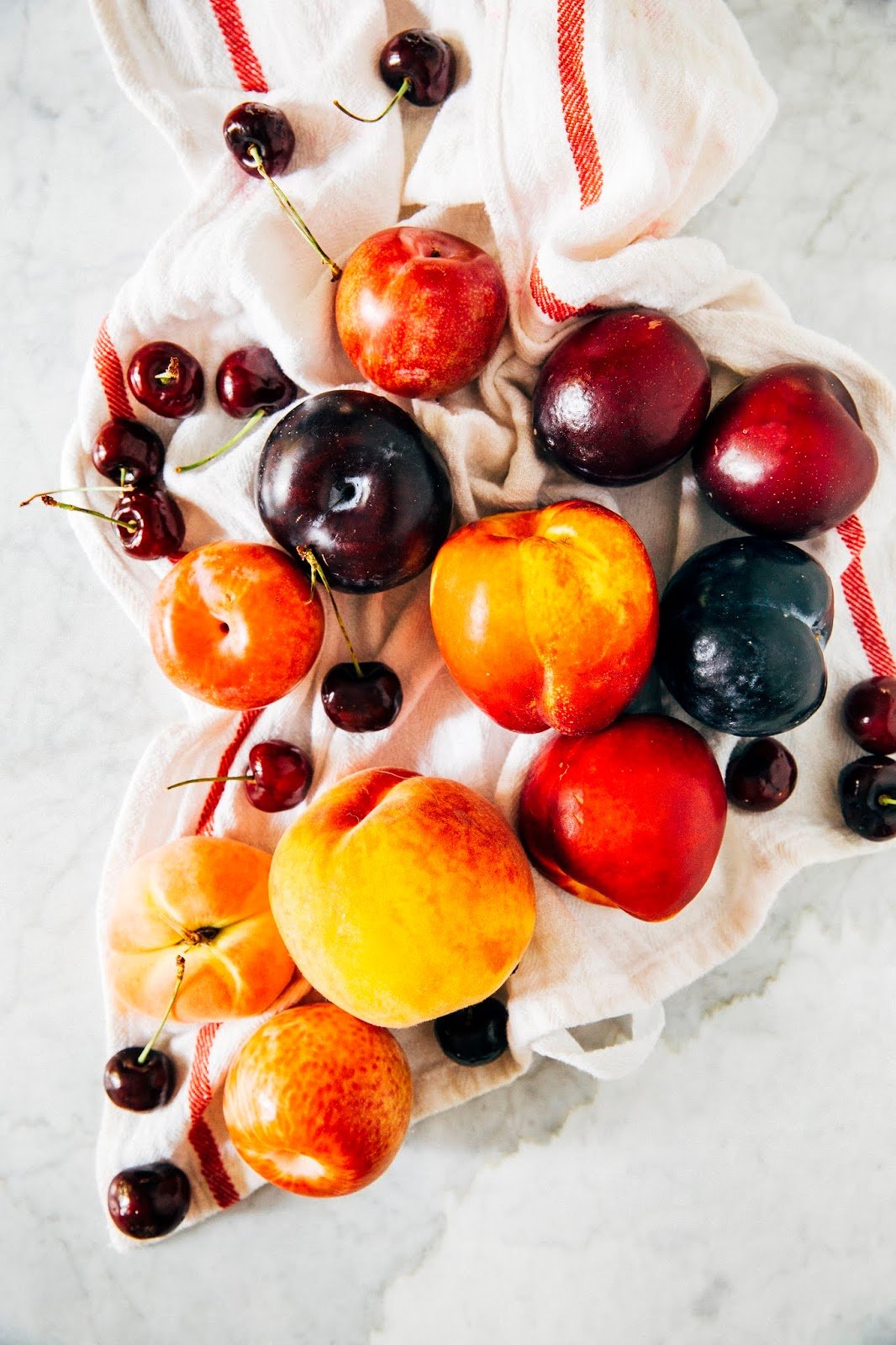 Stone fruits are the kind of fruits that, when you slice them open, they have a small pit (also known as a “stone”) in the center. Similar to pome fruits, you can choose to either peel them or leave them unpeeled when using in a pie.
To use a stone fruit in baking, you’ll first need to remove its stone. Note that most stone fruits are softer and easier to cut than pome fruits; as a result, I find it easier and safer to slice them in my hand as opposed to a chopping board for the first initial step. Hold the stone fruit in one hand and use your dominant hand to slice until your knife hits the stone center. Hold the knife steady as you rotate the fruit around the blade so that it cuts around the diameter of the fruit:

At this point, you can set the knife down and use your hands to pull the fruit apart. You should have two even halves. Pluck the stone from the center of the fruit and slice each half in half to create quarters.

At this point, you can slice each quarter widthwise in half or thirds; similar to pome fruit, slicing in half should create 1 1/2 to 2-inch chunks depending on the size of your stone fruit, and thirds will result in 1 to 1 1/2-inch chunks. 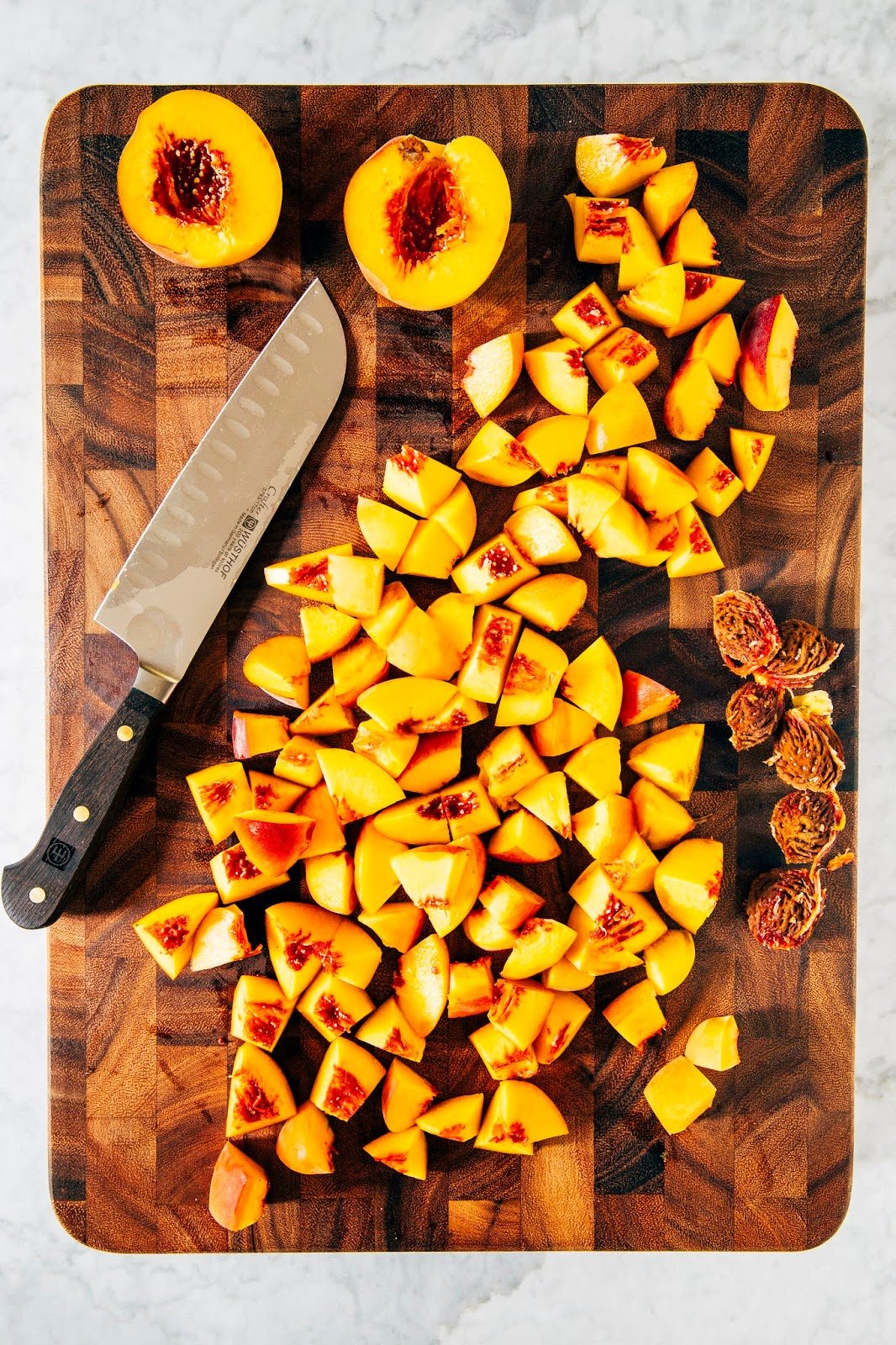 While the instructions above will work for most stone fruit, there is an exception to the rule —cherries. Slicing and pitting cherries this way is time consuming; I suggest investing in a cherry pitter, or finding a recipe like clafotuis that calls for the cherry pits to stay in tact (apparently the pits impart almond flavor in the final product). If you don’t want to invest in a cherry pitter, it’s best to use a smaller knife like a paring knife for the job.

For stone fruit recipes, be sure to check out the following in my archives: Rustic Blackberry and Peach Pie; Plum and Marzipan Crumble Galette; Rhubarb and Peach Summer Fruit Pie; Pineapple and Peach Pie with a Coconut Oil Crust; and Blueberry and Cherry American Flag Pie. 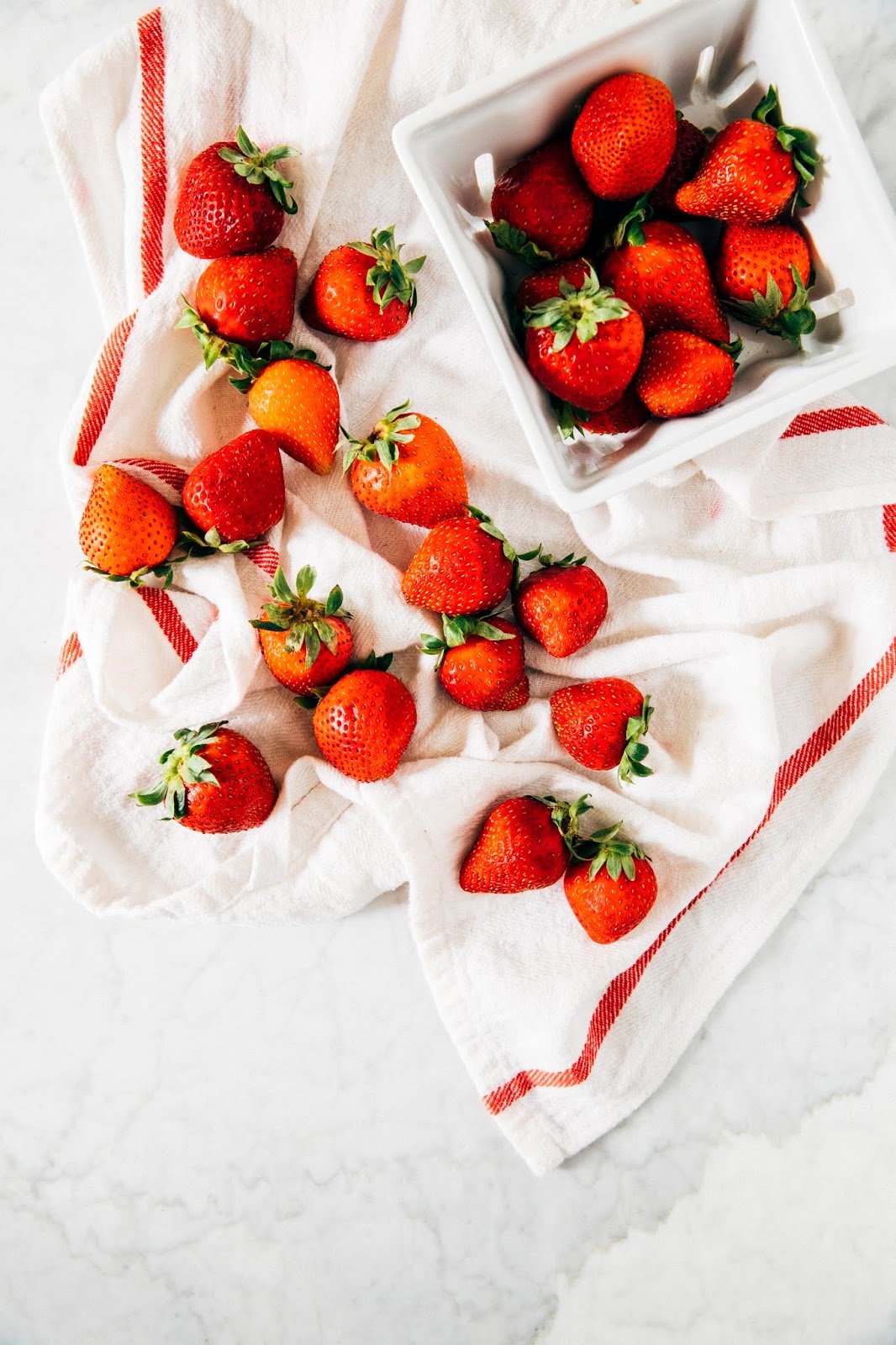 Strawberries are relatively easy to slice into halves and quarters, but I’m here to show you how to hull the berries with a paring knife. I used to just slice each individual berry of their tops by laying each one flat on a chopping board and lopping the top off; however, I noticed a technique on The Great British Bake Off where one of the contestants was using a paring knife to slice the top of each berry off in her hand. The method seemed much more efficient — the top of each berry went flying off immediately, landing in the bin underneath her.

To hull strawberries, hold a single berry in your non-dominant hand and a small paring knife in your dominant hand. Hold the knife steady at the top of the fruit and twist the berry around the steady blade to lop off the top: 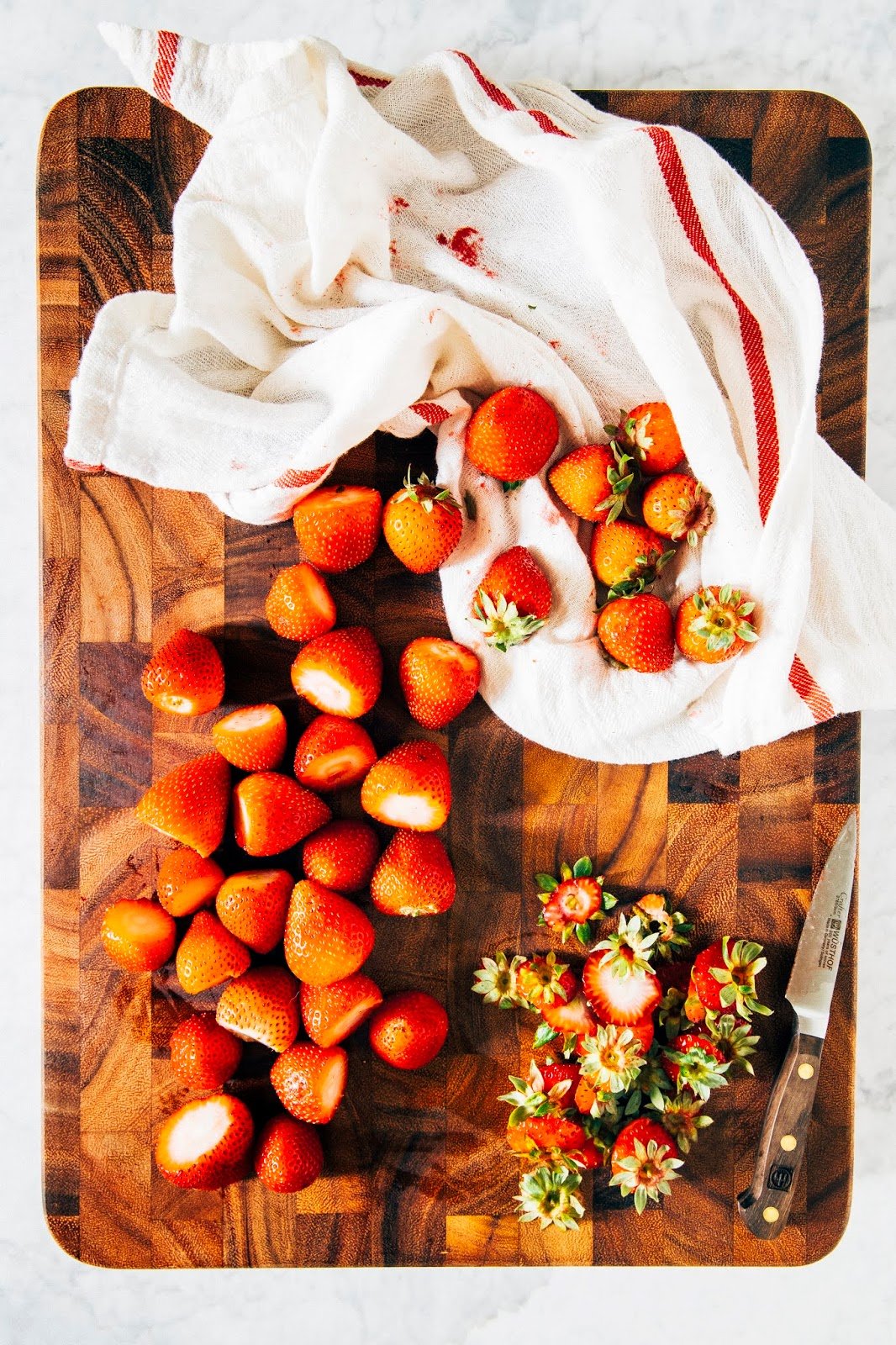 Of course, it’s best to do this over a trash can or compost bin, but it really doesn’t look as cute in photos. ????

Alright folks, that’s all for now! If you have any other basic skills — baking-related or otherwise — that you’d like to see on this blog, please leave a comment below with your request or shoot me an email at [email protected].

A big thanks to Williams-Sonoma for providing the Wusthof Crafter knife set you see in these pictures! Shop the post here: