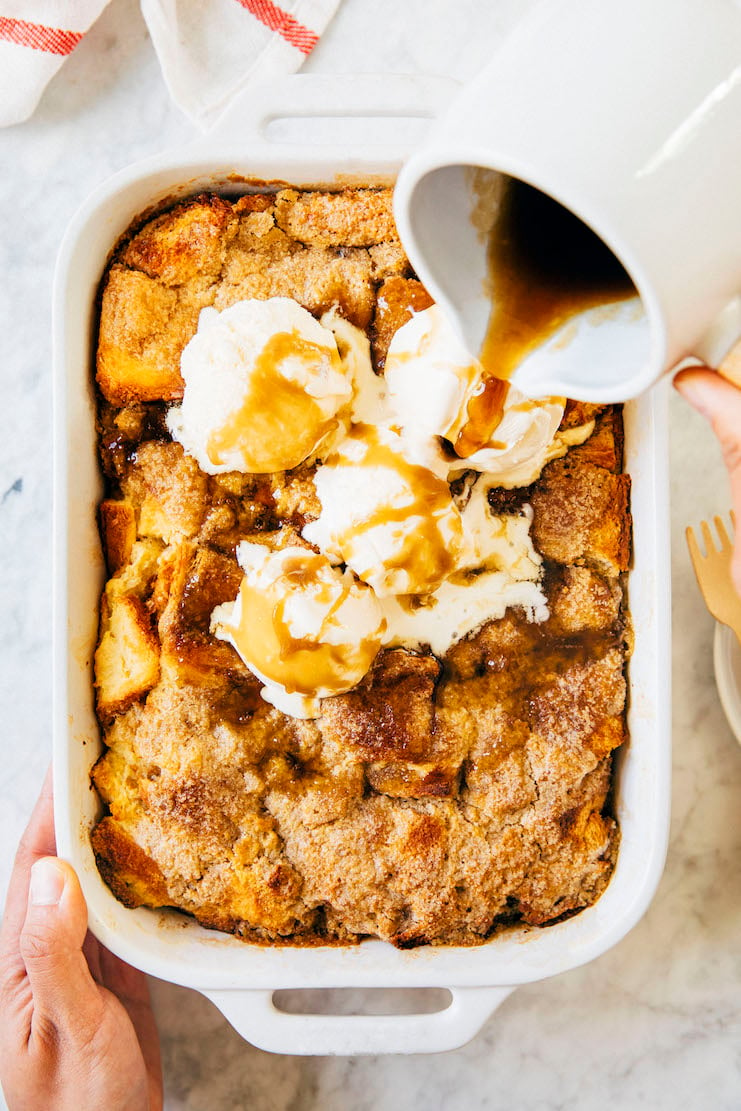 About This Bread Pudding with Bourbon Sauce Recipe

And when combined with the vanilla flavors of a generous scoop of ice cream? Absolutely delicious!

A big thank you to Land O’Lakes sponsoring this recipe. Learn more in the blog post, and thank you for supporting the sponsors that keep Hummingbird High up and running!

Why You Should Make The Recipe

Now let’s talk about all the reasons why you should make this bread pudding with bourbon sauce recipe:

Because Erlend and I are a two-person household, we can never finish an entire loaf of bread without some of it going stale. Instead of throwing out the stale bread, I frequently repurpose it for use in dessert recipes. Like this bread pudding with bourbon sauce recipe! Bread pudding works best with stale bread; the stale bread absorbs more of the liquid, making the dessert more custardy.

The bread pudding is extra flavorful, thanks to an easy technique of layering the bourbon sauce.

Both the bourbon sauce and bread pudding recipes come together really quickly.

The bourbon sauce is incredibly simple: simply whisk together brown butter, brown sugar, and bourbon whiskey! That’s it. Because all the ingredients are so flavorful on their own, there’s no need to cook the sauce to make them more prominent. Similarly, the bread pudding comes together quickly. Simply whisk together the remaining ingredients to make a “pudding,” toss the bread cubes in it, and bake the whole thing. It’s magic!

And let’s talk about key ingredients and their potential substitutions:

Why You Should Use Land O Lakes® Butter In This Recipe

Can I use Land O Lakes® Unsalted Butter instead?

Yes, absolutely! Most of the time, I actually prefer to use unsalted butter in my baking recipes. Using unsalted butter allows you to better control the amount of salt that goes into each recipe. So if that’s what you prefer too, feel free to substitute the Land O Lakes® Butter with Land O Lakes® Unsalted Butter. There’s no need to increase the salt in the recipe—it still works with just ¼ teaspoon kosher salt!

Brown sugar is granulated white sugar with a touch of molasses to give it its signature color and flavor. Because brown sugar contains molasses, it adds more moisture to baked goods than granulated sugar otherwise would. Brown sugar is available in two varieties: light or dark. Dark brown sugar is my personal preference. Because it contains more molasses, I find it to be more flavorful. However, you can use either in this bread pudding recipe without altering its flavor too much.

I don’t have brown sugar. Can I use granulated sugar instead?

Yes, with reservations. Although granulated sugar works in place of the brown sugar in the bourbon sauce recipe, your bourbon sauce will likely be missing some of the butterscotch flavors you would get if you used brown sugar.

You need ⅓ cup of bourbon whiskey to make this bread pudding with bourbon sauce recipe.

Bourbon Whiskey versus Other Whiskeys

There are many different kinds of whiskey: bourbon, Canadian, Irish, Japanese, rye, Tennessee, and more. Different countries have different legal definitions for each. In the United States, however, bourbon whiskey must be:

All bourbon is whiskey, but not all whiskey is bourbon. Confusing, right?

Can I use another whiskey (NOT bourbon) to make this bread pudding with bourbon sauce recipe?

Yes! Feel free to use whatever kind of (non-bourbon) whiskey you have on hand instead. It will still be delicious, I promise.

Can I use another alcohol in this bread pudding with bourbon sauce recipe?

Yes, with reservations. This recipe works best if you substitute the bourbon whiskey with another amber- or brown-colored, grain-based, high-proof alcohol. Brandies, rums, and tequilas are probably your best bet. Beer is okay too; however, your cake will be less flavorful since beer isn’t as high-proof as the liquors I listed.

Clear alcohols like vodka and gin work, but aren’t as flavorful as the amber and brown liquors. If you’re opting for a clear liquor, I recommend an orange-flavored liqueur. Just note that whatever alcohol you choose, you are substituting out the bourbon whiskey flavor of this sauce and replacing it with the flavor of the alcohol you are using instead.

You need 1 pound (16 ounces or 454 grams) of stale white bread to make this bread pudding with bourbon sauce recipe.

Why do I need to use stale bread for bread pudding?

Bread gets stale as moisture evaporates from it over time; as it does, the bread texture changes from soft and fluffy to stiff and dry. In theory, this dry texture allows the bread to absorb more of the milk and eggs needed to make the pudding. I like to think of the bread as a sponge. A dry sponge absorbs more liquid than a sponge that is already wet and full.

What kind of white bread did you use?

I used a generic white sandwich bread that we had leftover from Erlend’s sack lunches. But you can use whatever leftover bread you have on hand—see the next question!

Can I use other kinds of bread in this bread pudding with bourbon sauce recipe?

Yes, absolutely! In fact, I recommend it. If you want to go the extra mile, I recommend using an enriched bread—that is, bread made with eggs and sugar in its dough—to make this bread pudding recipe. I especially recommend brioche, challah, or even holiday panettone bread.

How To Make Bread Pudding with Bourbon Sauce

Here are the basic steps to make bread pudding with bourbon sauce from scratch:

Then, make the bread pudding.

FAQ: What You Need To Make Bread Pudding

Absolutely! This bread pudding recipe also works in an 8-inch square pan. However, you may need to add 5 minutes to the recipe’s bake time. A smaller cake pan means that the pudding will be slightly thicker; as a result, it needs a few more minutes in the oven.

Hm, I don’t have either a 9-inch OR 8-inch square pan. What can I use instead?

No worries! This bread pudding recipe also works in a ceramic or glass baking dish that holds between 1 to 2 quarts of food. Like the one I use in these pictures! My ceramic casserole dish measures roughly 7 x 10 inches and holds 1.25 quarts of food.

Help! I want to make this recipe but don’t have stale bread. What can I do?

Great question! I sometimes make stale bread for recipes by laying out slices of the bread on a wire rack and letting it sit uncovered overnight. The next day, the bread is pretty stale already! You can also speed up the process by placing it in front of a fan (though sometimes, if the bread is too light, it can blow away—so watch out!). Another friend of mine swears that putting the bread slices on a wire rack in the fridge overnight yields even better results, too.

If you don’t want to wait overnight, you can “toast” the bread to help dry it out. Slice the bread into 1- to 1 ½- inch cubes. Place the cubes on a baking sheet and toast in the oven at 350ºF for about 20 minutes, turning the cubes halfway through the bake time to promote even toasting.

Can I make the recipe the day before I’m planning on serving it?

Yes! In fact, doing so yields an even more delicious bread pudding since you allow the bread more time to absorb the pudding. To turn this into a “make ahead” recipe, follow the recipe instructions to make the bourbon sauce and pudding, soak the bread cubes, and assemble the bread pudding. However, instead of baking the bread pudding, simply cover the top of the cake pan with a tight layer of plastic wrap. Refrigerate until ready to bake. The unbaked bread pudding will keep for around 24 hours in the fridge.

What temperature do you serve bread pudding at?

My preference is to serve bread pudding while it’s still warm, about 20 minutes after pulling it out the oven. But that being said, this bread pudding also tastes great at room temperature, or even chilled in the fridge. You do you!

What do you serve bread pudding with?

Although this bread pudding recipe comes with a side of bourbon sauce, you can also serve it with a pour of heavy cream, a dollop of whipped cream, or a scoop of your favorite ice cream! Again, you do you—it’s going to be delicious no matter what.

How To Store Bread Pudding with Bourbon Sauce

Can you freeze bread pudding with bourbon sauce?

If you plan on freezing the bread pudding, I recommend skipping the second and third pours of bourbon sauce. If you freeze the pudding after pouring the sauce on top, it will make the bread pudding overly soggy when you rewarm it.

To freeze bread pudding, tightly wrap the baking dish in two layers of plastic wrap. Freeze for up to 3 months. To serve and rewarm, thaw in the refrigerator overnight, then for an hour at room temperature. Rewarm in the oven at 350ºF for about 20 minutes. Be extra careful when using a glass or ceramic pan—these types of pans are sensitive to sudden temperature changes. A cold pan can shatter if placed in a warm oven. Be sure to thaw the dish so that it’s close to room temperature when you place it in the oven for rewarming! 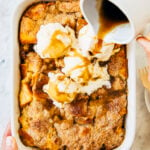 For the Bread Pudding with Bourbon Sauce

For the Bread Pudding with Bourbon Sauce 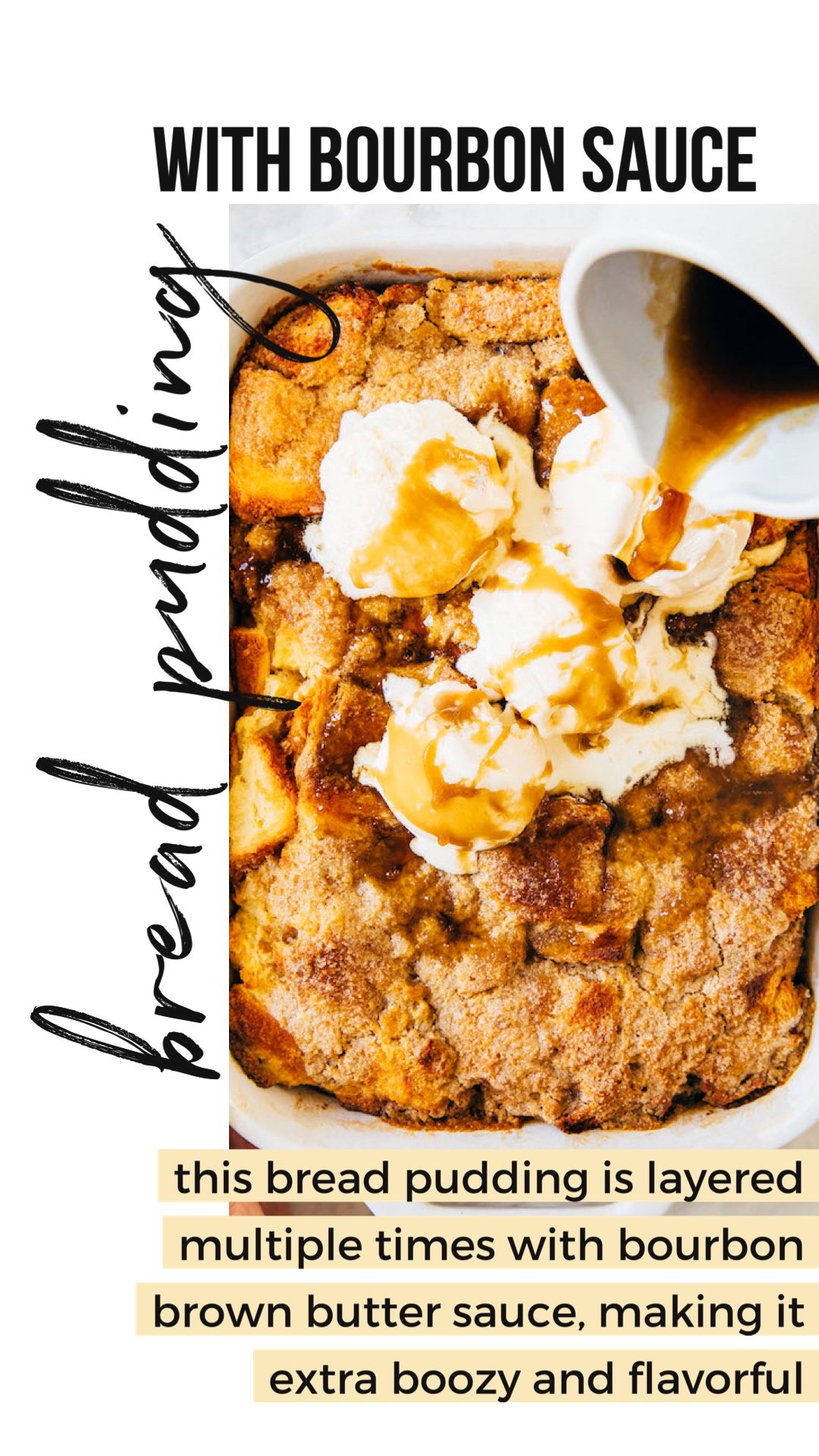