These brown butter sweet potato bars are the perfect Friendsgiving dessert: easy to transport, perfect for a crowd, and delicious to boot! The bars are topped off with a fluffy, marshmallow meringue and are on a brown butter shortbread cookie base made even more delicious with Vermont Creamery’s new cultured butter—jump to the recipe! As […]

These brown butter sweet potato bars are the perfect Friendsgiving dessert: easy to transport, perfect for a crowd, and delicious to boot! The bars are topped off with a fluffy, marshmallow meringue and are on a brown butter shortbread cookie base made even more delicious with Vermont Creamery’s new cultured butter—jump to the recipe! As always, all thoughts and opinions are my own, and thank you for supporting the sponsors that keep Hummingbird High up and running! Historically, over the last few years, Erlend and I have celebrated Thanksgiving by ourselves. Both our families lived too far away—the flights were always too expensive and much too long for such a short holiday, and with Christmas and Hanukkah only a few weeks later, it was better to save up our limited PTO time for then.

As a result, we made our own Thanksgiving traditions. We started by celebrating with just the two of us, whipping up epic meals with non traditional, Asian-themed dishes like Chinese-style roasted duck, fish sauce brussels sprouts and rice cakes with caramelized potatoes and Korean gochujang sauce from the momofuku cookbook, and pumpkin coconut egg tarts and matcha cream pie. We had fun, but still—it was a lot of food for just the two of us!

Over the years, we invited other friends of ours—the ones also marooned by expensive flights and limited PTO—to our makeshift Thanksgiving meal. These friends would bring more traditional Thanksgiving offerings like green bean casseroles, mashed potatoes, and sometimes even a whole roasted turkey to our dinners. This year, as I looked around our table, I realized that our Asian-style Thanksgiving had fully evolved into an official Friendsgiving complete with a full turkey, stuffing, and all the Thanksgiving table trimmings.

So what is Friendsgiving? To me, it’s exactly what it sounds like: a Thanksgiving celebration, but with your friends instead of your family. Beyond that, Friendsgiving is what you make of it—it can happen instead of a traditional Thanksgiving with your family, or in conjunction with one (most folks celebrate Friendsgiving a week or so before the official dates of Thanksgiving itself). You can serve the traditional Thanksgiving table meal, or serve a menu of your choosing with a different centerpiece (ie, roast duck instead of turkey) like Erlend and I did in those early years. You can enlist friends to each bring a dish potluck style, or gather everybody early in the same kitchen to cook together. Because it’s a relatively new tradition, there are no rules—well, except one: share a wonderful meal in each other’s company. After all, your friends are the family you choose, right? These days, our Friendsgiving celebration has evolved into more of potluck type situation. And being the baker of the group, I’m always assigned my favorite part of the meal: dessert.

And here’s the truth: bringing dessert to a potluck is more challenging than it seems. I’ve been burned in the past and brought something too finnicky and elaborate, or something that was too sensitive to temperature changes. I spent the entire car ride fretting nervously that it was going to collapse/melt on the way over and that we’d be left dessert-less (a legitimate worst case scenario for me). Honestly, it’s just not the worth the stress! Similarly, I’ve brought desserts that were too “fancy” and flavored with non-traditional flavors that barely went touched at the table. It turns out that, especially at Thanksgiving, people just want the comfort foods that remind them of home.

So here are my best tips for Friendsgiving desserts:

With those Friendsgiving entertaining tips in mind, I have the perfect Friendsgiving dessert for you: Brown Butter Sweet Potato Squares. 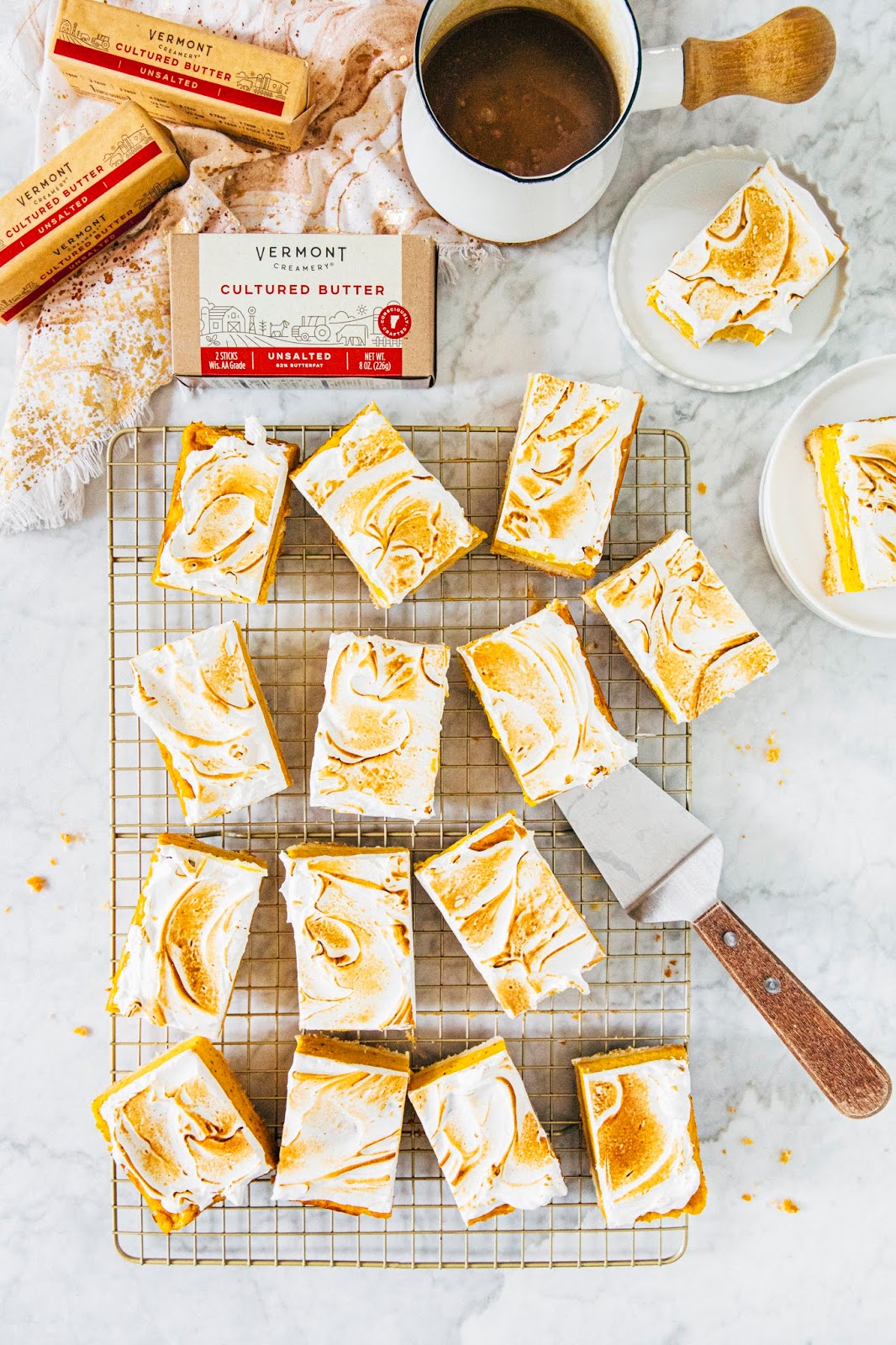 These brown butter sweet potato squares were inspired by a classic Thanksgiving dessert: sweet potato pie. Think of it as sweet potato pie, but in bar form—their bar format makes them easier to transport and feed a larger crowd of people.

Although I came to close to dubbing these “sweet potato pie bars”, they’re definitely more “cookie bar” than “pie”. That’s because, instead of a traditional flaky pie crust, the bars are set on a brown butter shortbread crust. The shortbread crust is made with Vermont Creamery’s Unsalted Cultured Butter, which I love for its delightful tang and rich, silky notes of buttermilk and hazelnut. Their butter is made with only two ingredients—cream and cultures—and you can really taste how fresh and high-quality it is.

The bars are then topped off with a fluffy marshmallow meringue inspired by the sweet potato casseroles topped with mini marshmallows. For a show-stopping effect, I actually like to torch the meringue in front of my friends! 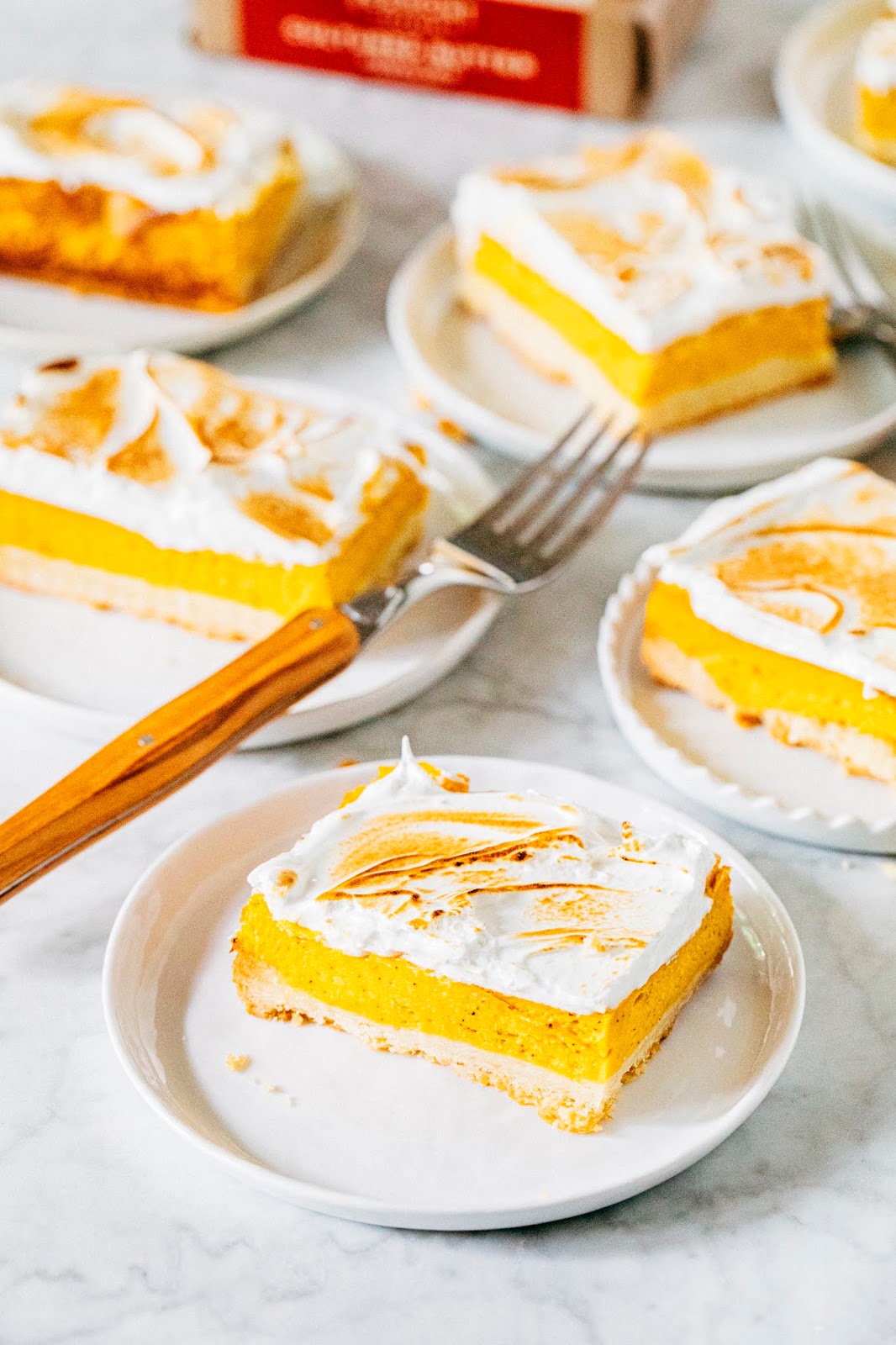 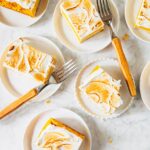 For the Roasted Sweet Potatoes

For the Brown Butter Shortbread Crust

For the Sweet Potato Filling