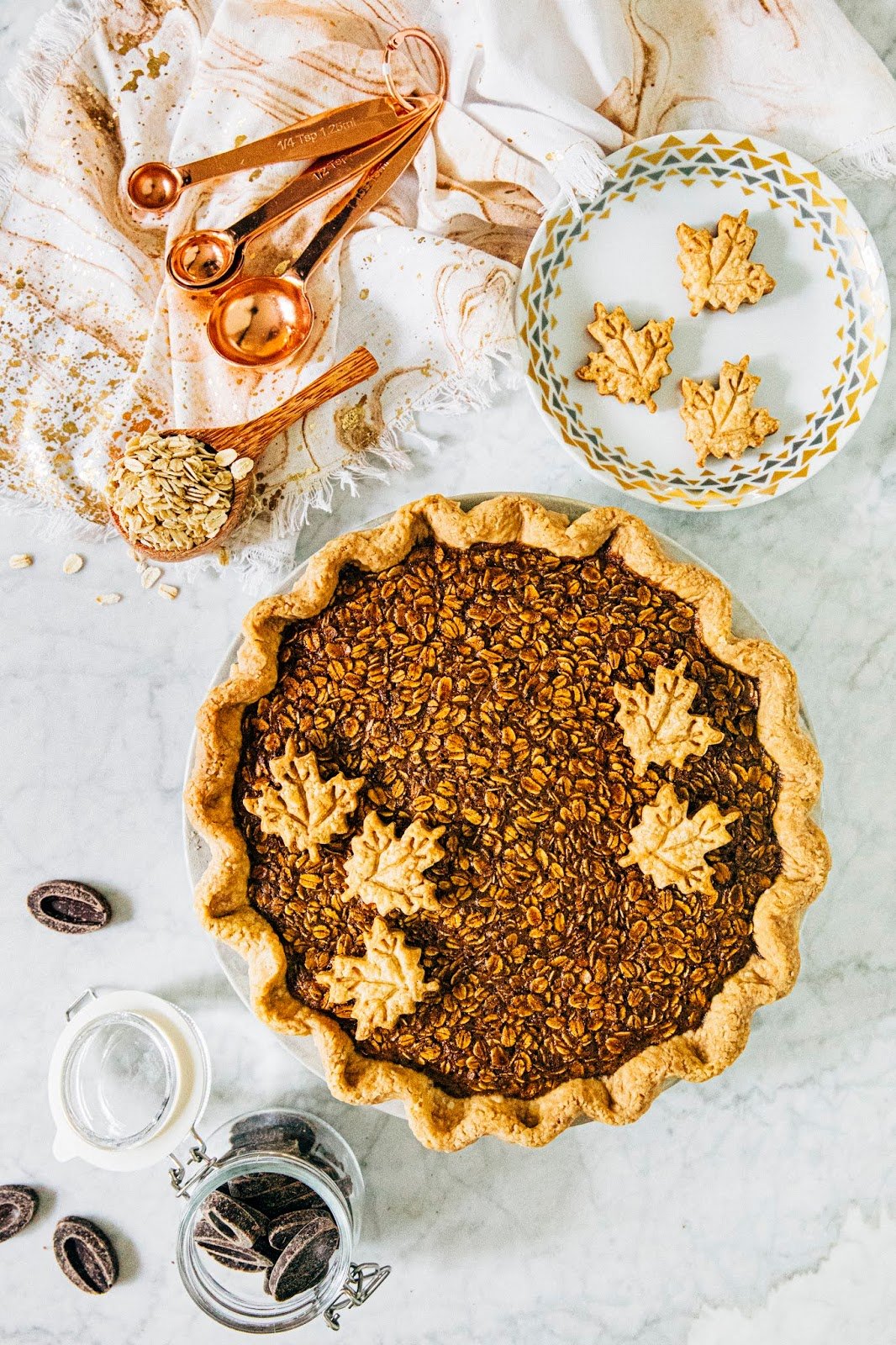 If you’re looking for a unique and different Thanksgiving pie recipe, this black bottom oatmeal pie recipe is for you! First popularized by famed Brooklyn pie shop, Four & Twenty Blackbirds, this pie is inspired by the flavors of an oatmeal chocolate chip cookie—jump to the recipe! For even more flavor, be sure to use […]

If you’re looking for a unique and different Thanksgiving pie recipe, this black bottom oatmeal pie recipe is for you! First popularized by famed Brooklyn pie shop, Four & Twenty Blackbirds, this pie is inspired by the flavors of an oatmeal chocolate chip cookie—jump to the recipe! For even more flavor, be sure to use organic all-purpose flour and old-fashioned rolled oats from my sponsor, Bob’s Red Mill. As always, all thoughts and opinions are my own, and thank you for supporting the brands that keep the lights on at Hummingbird High! 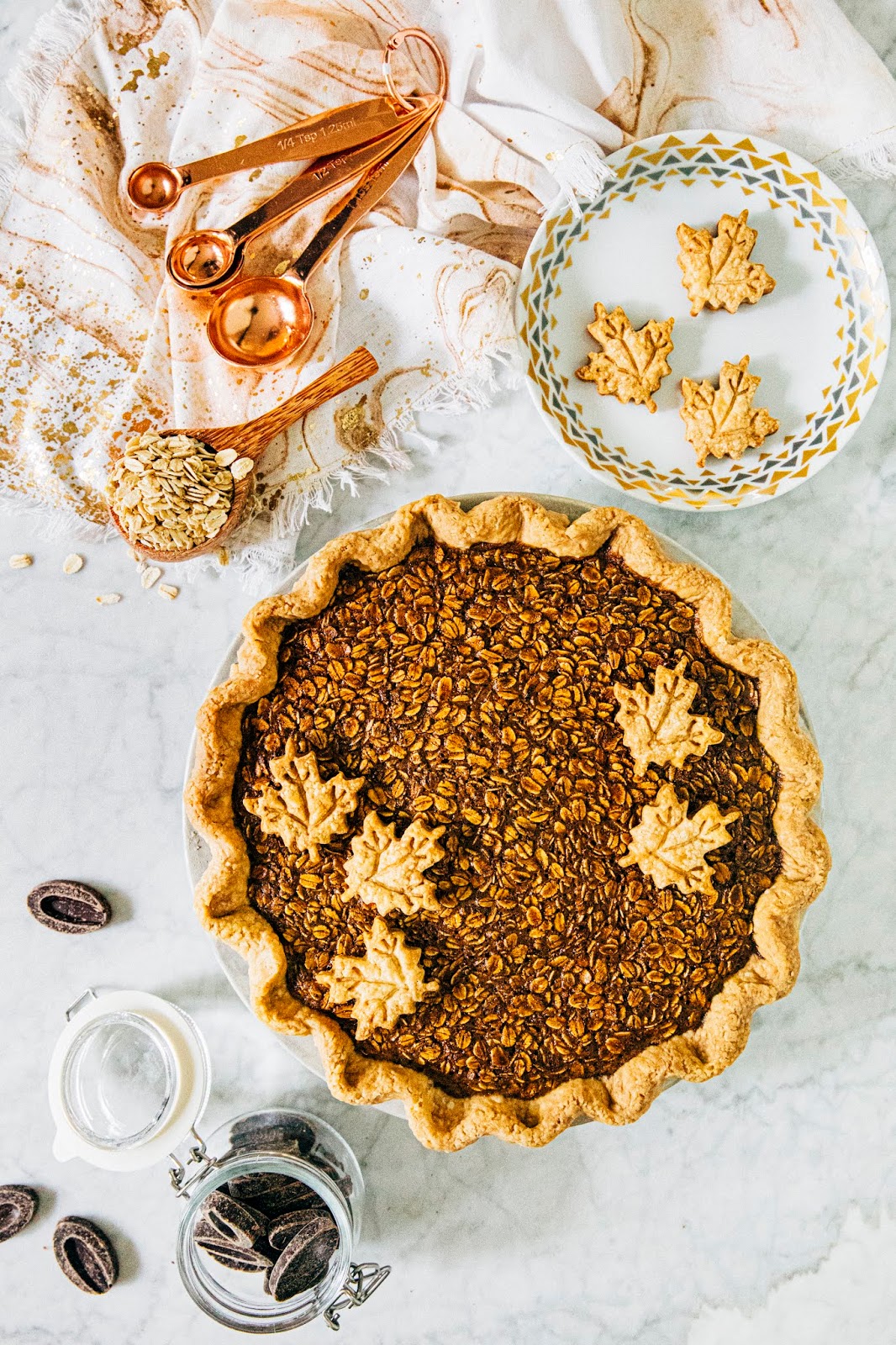 Every year, when Thanksgiving rolls around, I am faced with a dilemma. You see, I am not the world’s biggest fan of traditional Thanksgiving pies like pumpkin and sweet potato. There, I said it. Have I failed you as a food blogger? But I honestly find those types of pies too heavy and starchy, especially after a large meal of turkey and sides like stuffing and mashed potatoes. I could skip serving them completely, sure, but a Thanksgiving table feels incomplete without at least one pie.

So every Thanksgiving, I try and research “alternative” pies to make for the occasion. A few years ago, when we still had the tradition of making an Asian-style Thanksgiving (we served a roasted Chinese-style duck instead of Turkey), I made a matcha buttermilk pie instead. I’ve also experimented with substituting the pie crust for a tart shell instead, and purple sweet potatoes instead of traditional orange ones to lighten up the pie. They were all delicious (but definitely still on the heavy side, lol).

This year, I decided to bake a recipe off my baking bucket list: black bottom oatmeal pie. 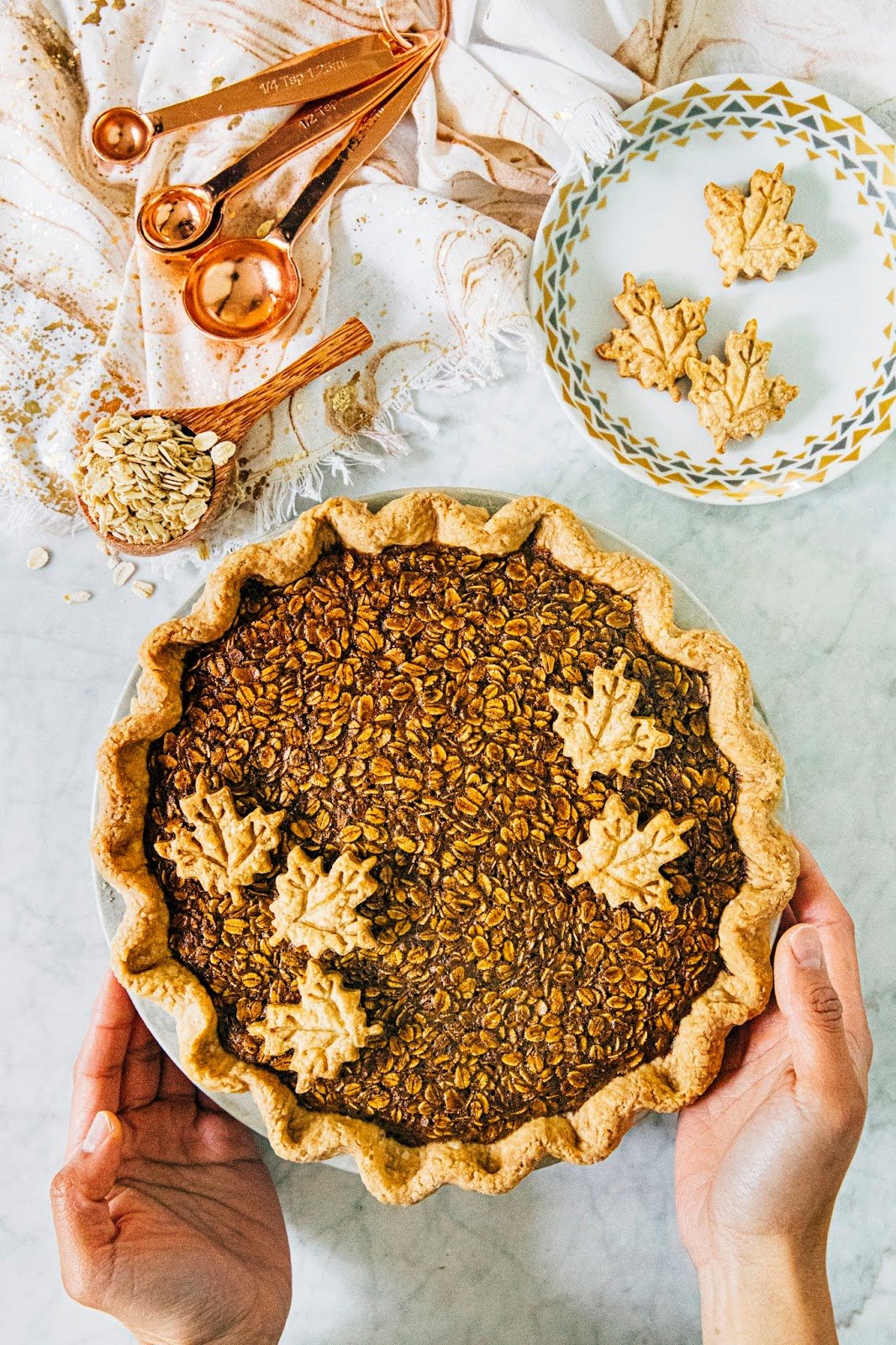 What is black bottom oatmeal pie?

This particular recipe comes from a New York City pie shop called Four & Twenty Blackbirds. According to the story in their cookbook, back in the day, thrifty folks who couldn’t afford the pecans for pecan pie would substitute oats instead. Four & Twenty Blackbirds took one of these old-fashioned recipes and improved it by adding a layer of chocolate ganache at the base of the pie crust (hence the “black bottom”). Not only does the ganache prevent the pie crust from getting soggy, it also makes the entire pie taste like an oatmeal chocolate chip cookie, too. It’s absolutely delicious.

While making the oatmeal filling is fairly straightforward, the process for making the crust is a little more complicated. You’ll need to blind bake the pie crust—check out my guide below on how to blind bake a pie crust (featuring some pie-making FAQs!), along with my baker’s notes on how to make the best black bottom oatmeal pie ever! 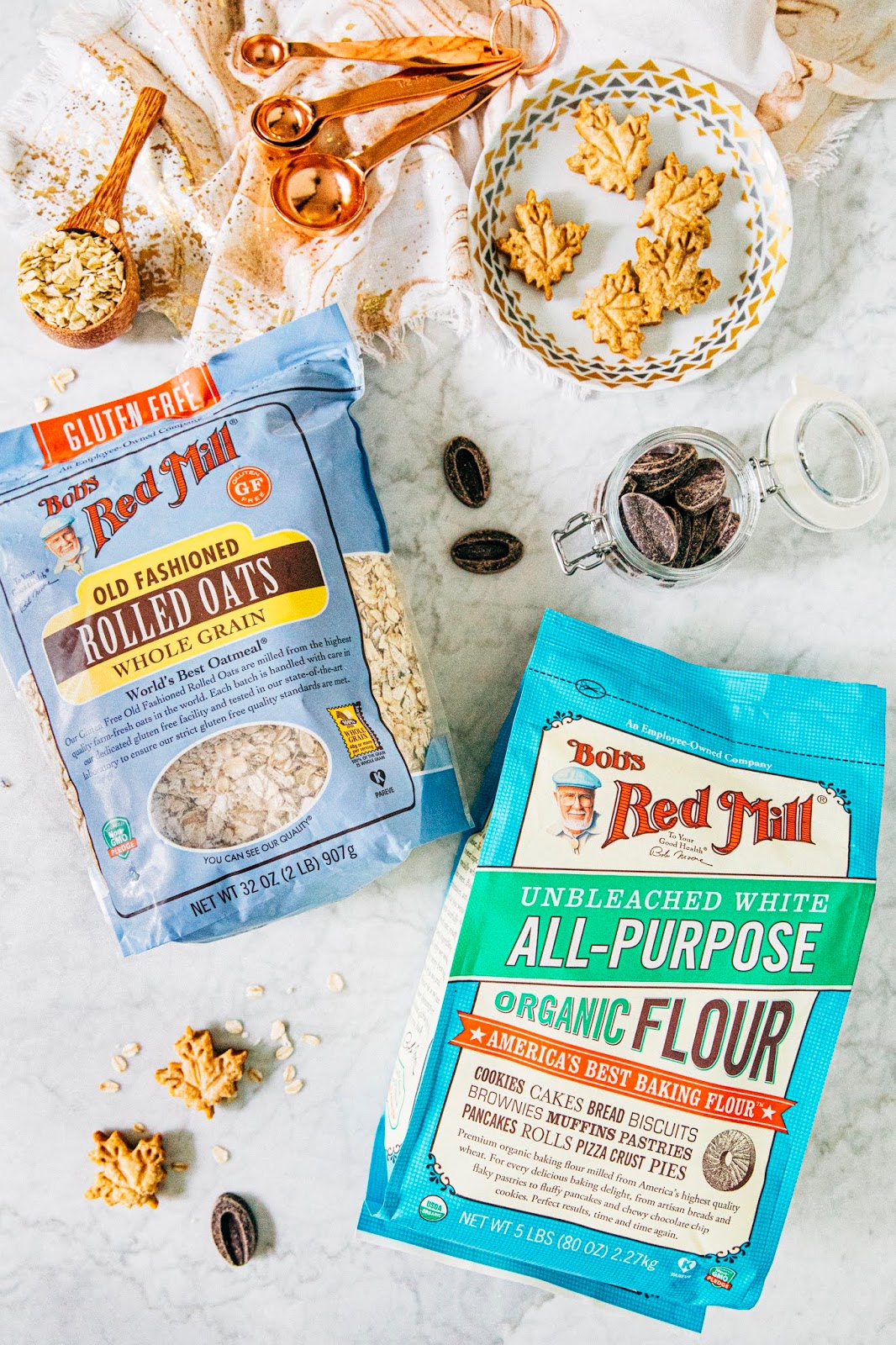 How to Blind Bake Pie Crust

What is blind baking a pie crust?

Blind baking, also known as par-baking or pre-baking, is when pie dough is formed into a crust and cooked without the filling for a short period of time. After the crust is blind baked, it is then baked a second time, but this time with the filling in place. This is because some fillings bake faster than the crust in the oven—if you have a filling that bakes up fast, you’ll either end up with a raw pie dough that needs more time in the oven OR a filling that’s overdone. Baking the crust without the filling first and then AGAIN with the filling ensures that you’ll have the perfect pie, no matter what.

When do you need to blind bake a pie crust?

Why do you use pie weights when you blind bake a pie crust?

A recipe for blind baking pie usually instructs you to line the unbaked crust with foil or parchment and then pour pie weights into the center. You then bake the pie with the weights.
The pie weights act as “filling” that will help hold the crust in shape; without it, the crust will either puff up or slide down the sides of the pan as it bakes. You can buy specialty pie weights in a cooking shop or online; I prefer the ceramic ball weights to the metal chains because I find that heavier weights help the crust hold its shape better. In a pinch, you can also use dried beans, rice, or even coins from a jar of spare change.

What temperature should you blind bake a pie crust?

Traditionally, most recipes instruct you to bake the pie crust at a high heat like 425°F to “set” the dough by encouraging the butter to melt quickly. If the butter melts quickly, more steam evaporates all at once, causing the flaky texture that’s desired in pie crust. However, I found that baking it at those temperatures causes the crust to shrink and lose its shape. Instead, I like to bake mine at a lower temperature for a longer period of time—you can read more about why in my cookbook, Weeknight Baking.

How long to blind bake a pie crust?

It depends on the temperature you bake the crust at (see previous question). If you choose to bake the pie at a higher temperature, you’ll usually need to blind bake for around 20 to 25 minutes. With my method, you’ll need to add an additional 10 to 15 minutes and bake for 35 minutes. There are also some recipes in which you’ll need to blind bake the pie FULLY because the filling itself doesn’t need to be baked—recipes for ice cream or pudding pies are an example. If you’re blind baking the pie fully, you’ll likely need to add more time to the approximations I just gave you. Again, I wouldn’t worry about this too much; most recipes will instruct you accordingly! 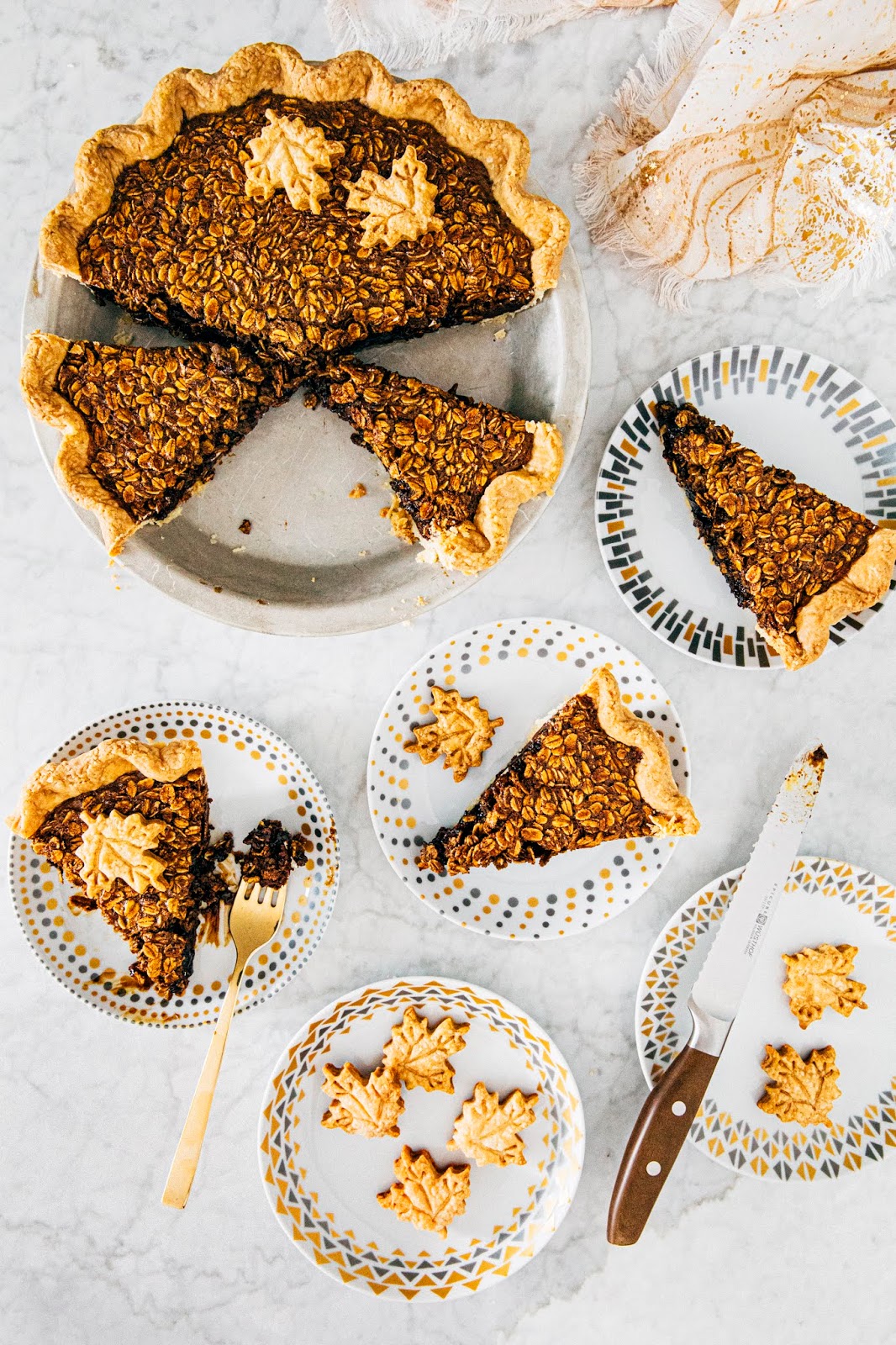 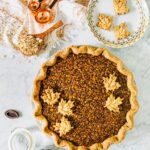 For the Black Bottom Oatmeal Filling

Day 1: Make the Pie Dough and Prep for Blind Baking