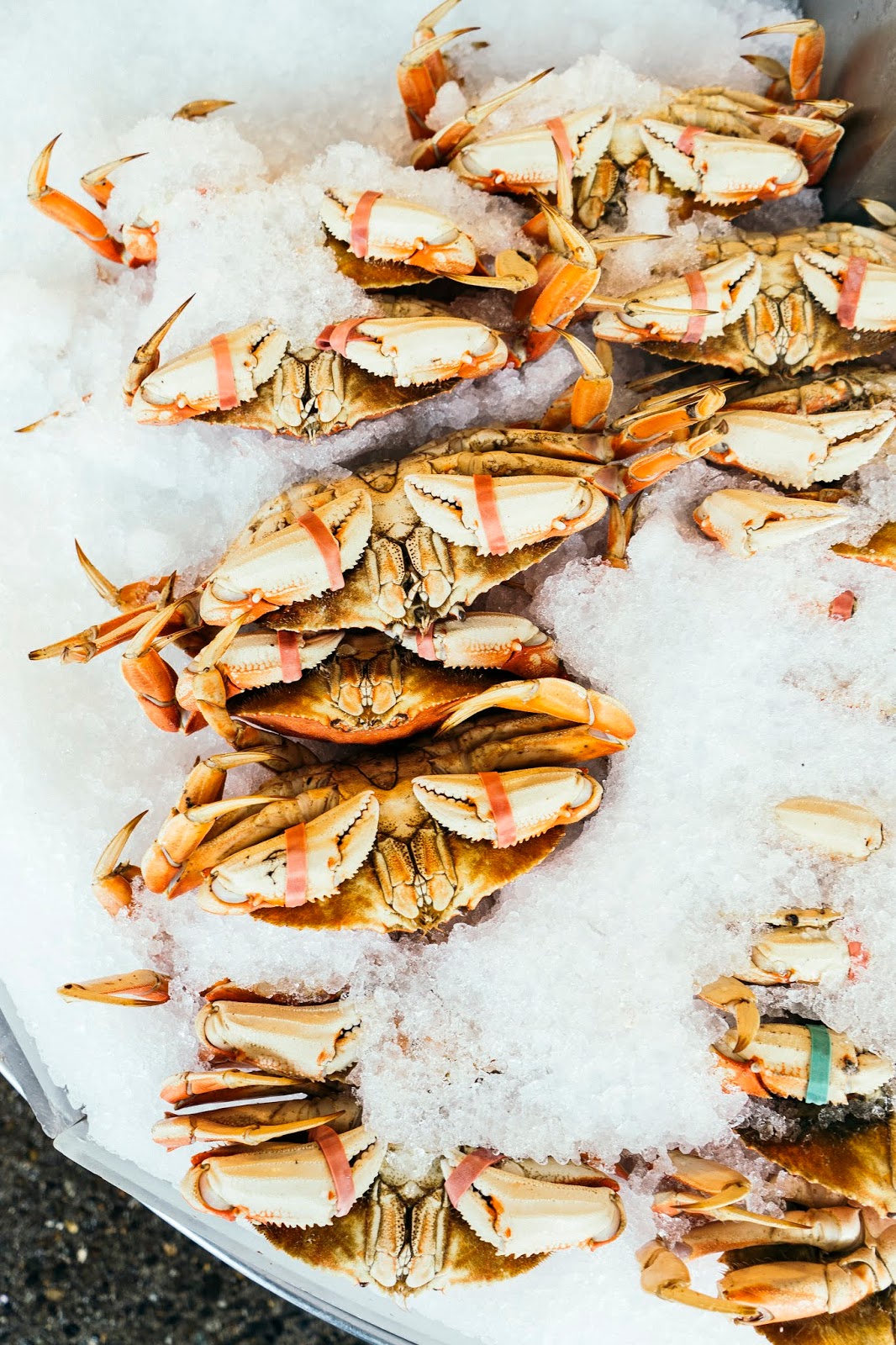 Erlend and I recently got back from a long weekend in Seattle! Despite the fact that Seattle is only a three hour drive from Portland, neither Erlend or myself had been to the city in a few years. In my early twenties, I held the unpopular opinion that Seattle was like Portland, except more expensive, […]

Erlend and I recently got back from a long weekend in Seattle! Despite the fact that Seattle is only a three hour drive from Portland, neither Erlend or myself had been to the city in a few years. In my early twenties, I held the unpopular opinion that Seattle was like Portland, except more expensive, more traffic-y, and, er, not as cool. Now that I’m a little older and more tempered, I appreciate Seattle for what it is — and while it is pricier and more crowded than Portland (though Portland honestly is catching up on both fronts), it’s a more cosmopolitan and diverse city with a lot of awesome things to offer.

Here’s what we ate and drank:

Since we were driving in from Portland, our first stop in the city was for lunch in the International District, one of Seattle’s southern neighborhoods. The International District is full of Asian restaurants offering cuisines like Vietnamese noodles, Hong Kong-style roasted meats, and more. There were tons of options to choose from, but we ended up at Dough Zone, which is known for dumplings — many Seattle outlets even claim that their xiao long bao (soup dumplings) are better than Din Tai Fung, which earned a Michelin star for their dumplings! 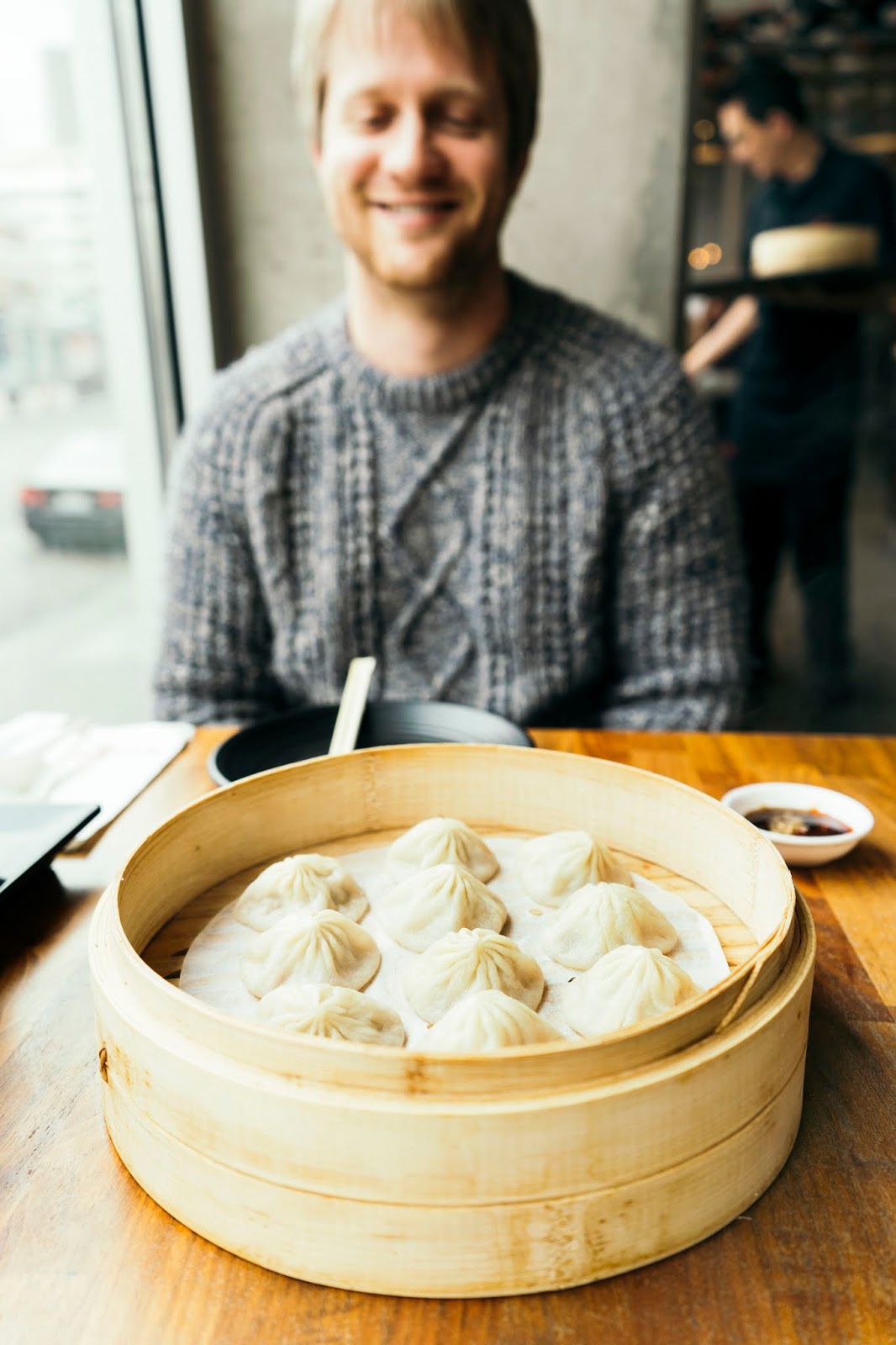 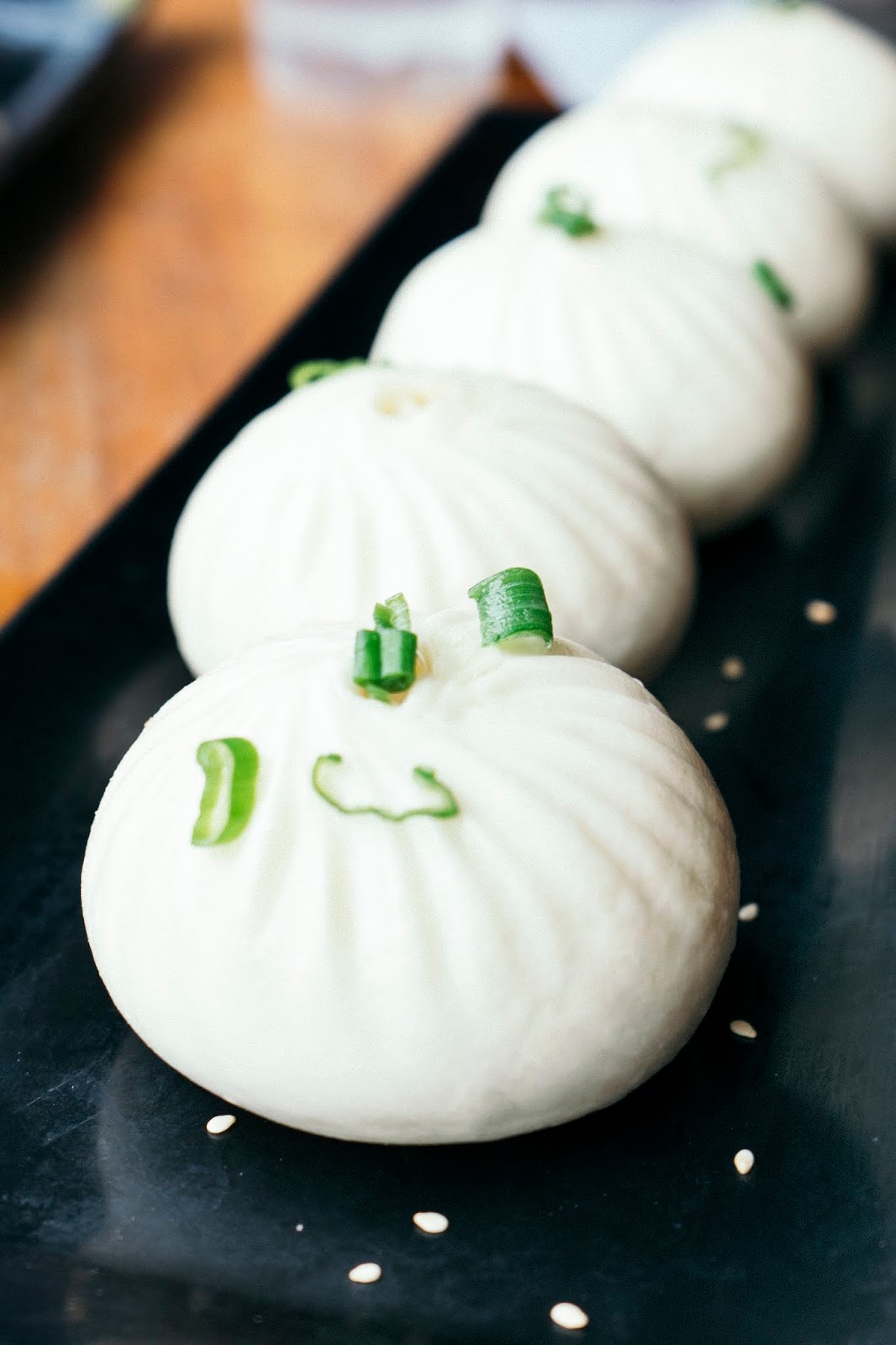 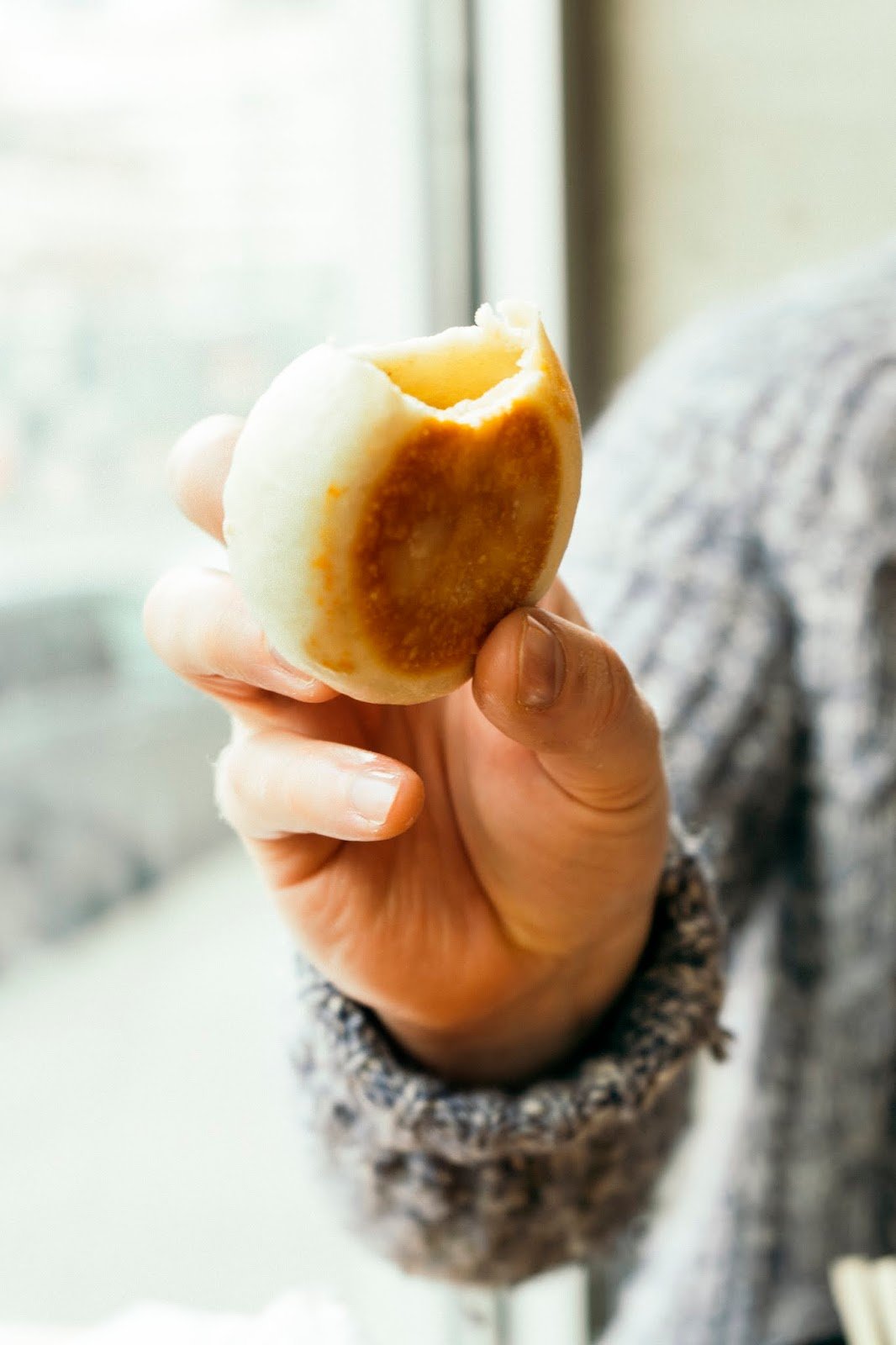 Dough Zone did NOT disappoint. It was one of our favorite meals there, and we ordered literally every kind of dumpling on their menu: pork soup dumplings, pan fried pork buns (Erlend is showing off their perfectly crisp bottom), pork and shrimp pot stickers, pork wontons in chili oil, and steamed beef dumplings. It sounds like a lot, but it was actually the perfect amount to get us ready for our big walk.

After Dough Zone, we walked around the International District and found ourselves exploring Daiso, a Japanese dollar store, and Uwajimaya, a Japanese supermarket complete with a bookstore, mini food court, and more. 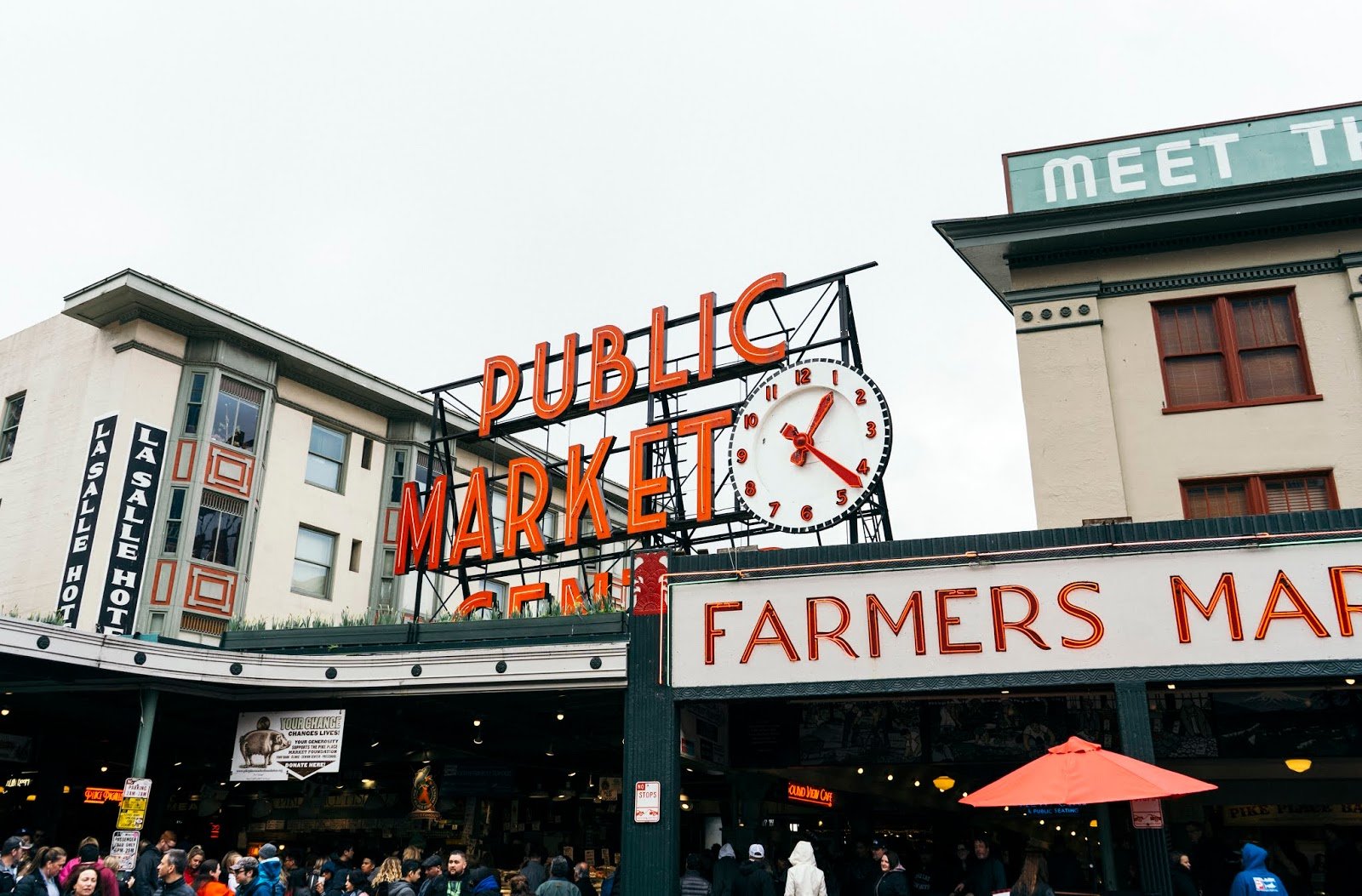 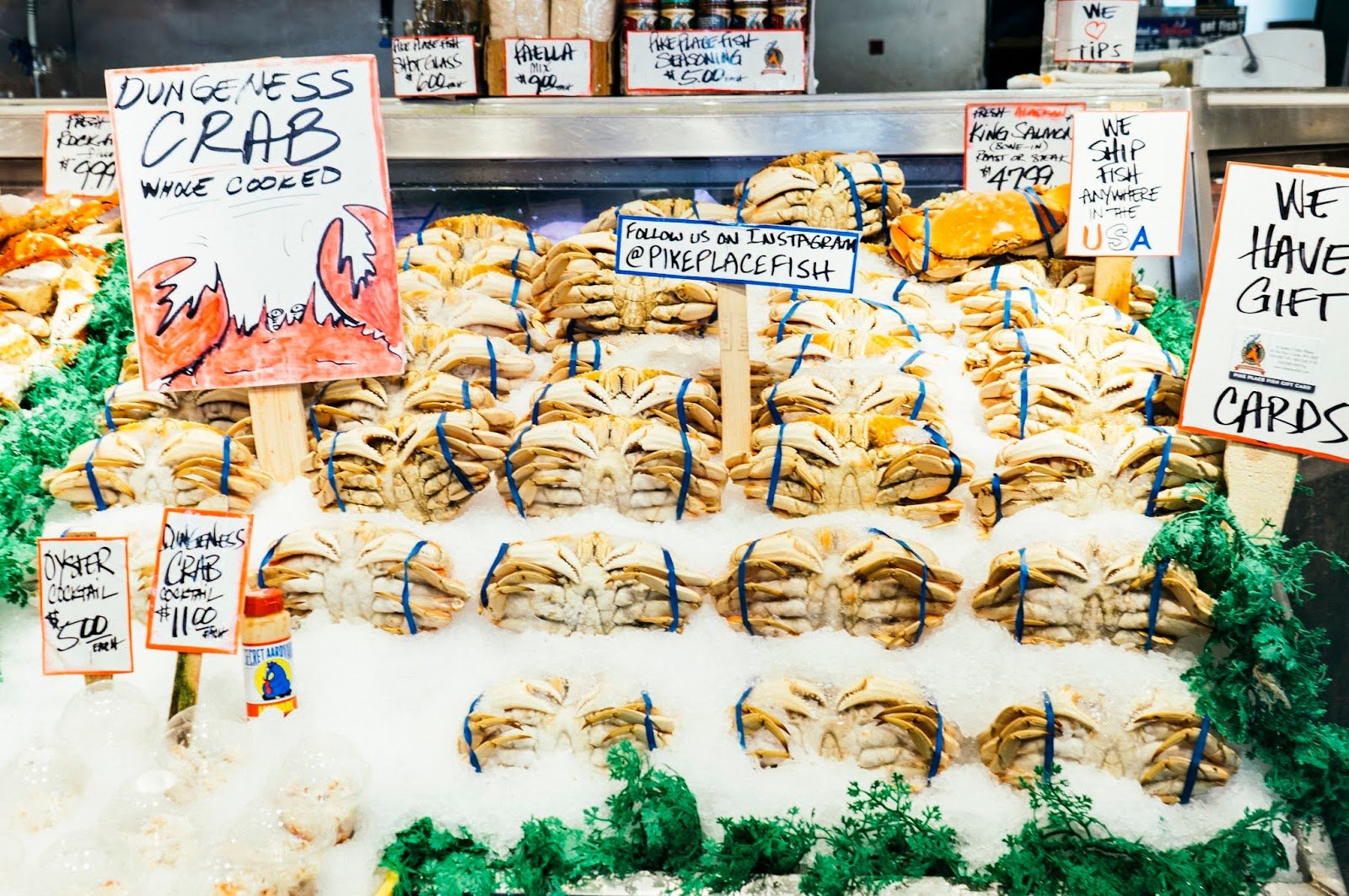 From there, it was a quick walk to Seattle’s Pioneer Square neighborhood, which is full of cute little indie shops and also home to The London Plane, an Instagram-famous cafe/flower shop/bakery that I visited the last time I was in Seattle and had lunch there with Molly and Aran. We eventually ended up in Seattle’s famous Pike Place Market, where we braved the crowds (and oh boy, on Saturday afternoon, it was crowded!) to admire the fish stalls and produce at the farmers market, as well as the grilled cheeses at Beecher’s Handmade Cheese, the pastries at Piroshky Piroshky, and the hot donuts at Daily Dozen Doughnut. 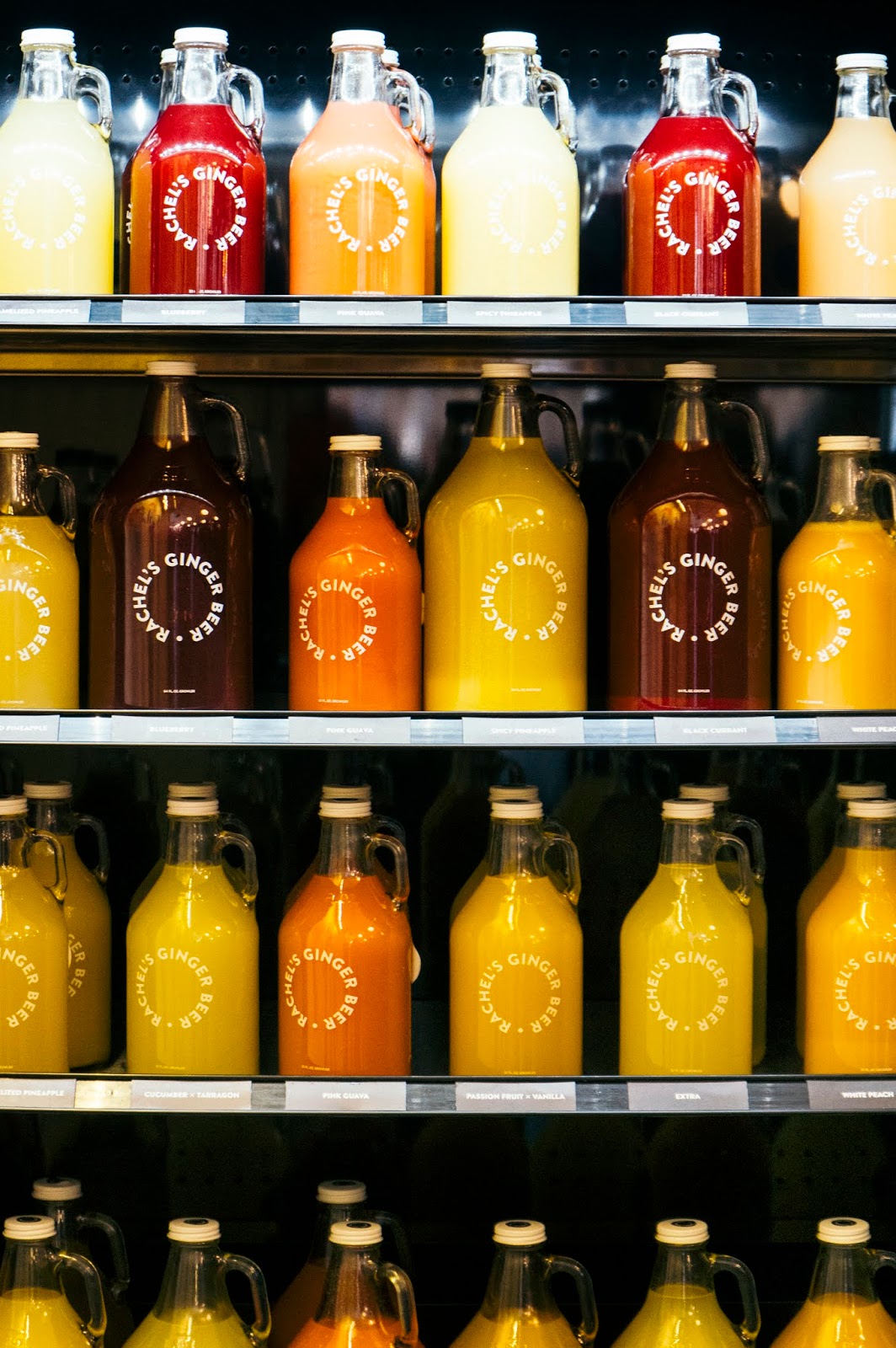 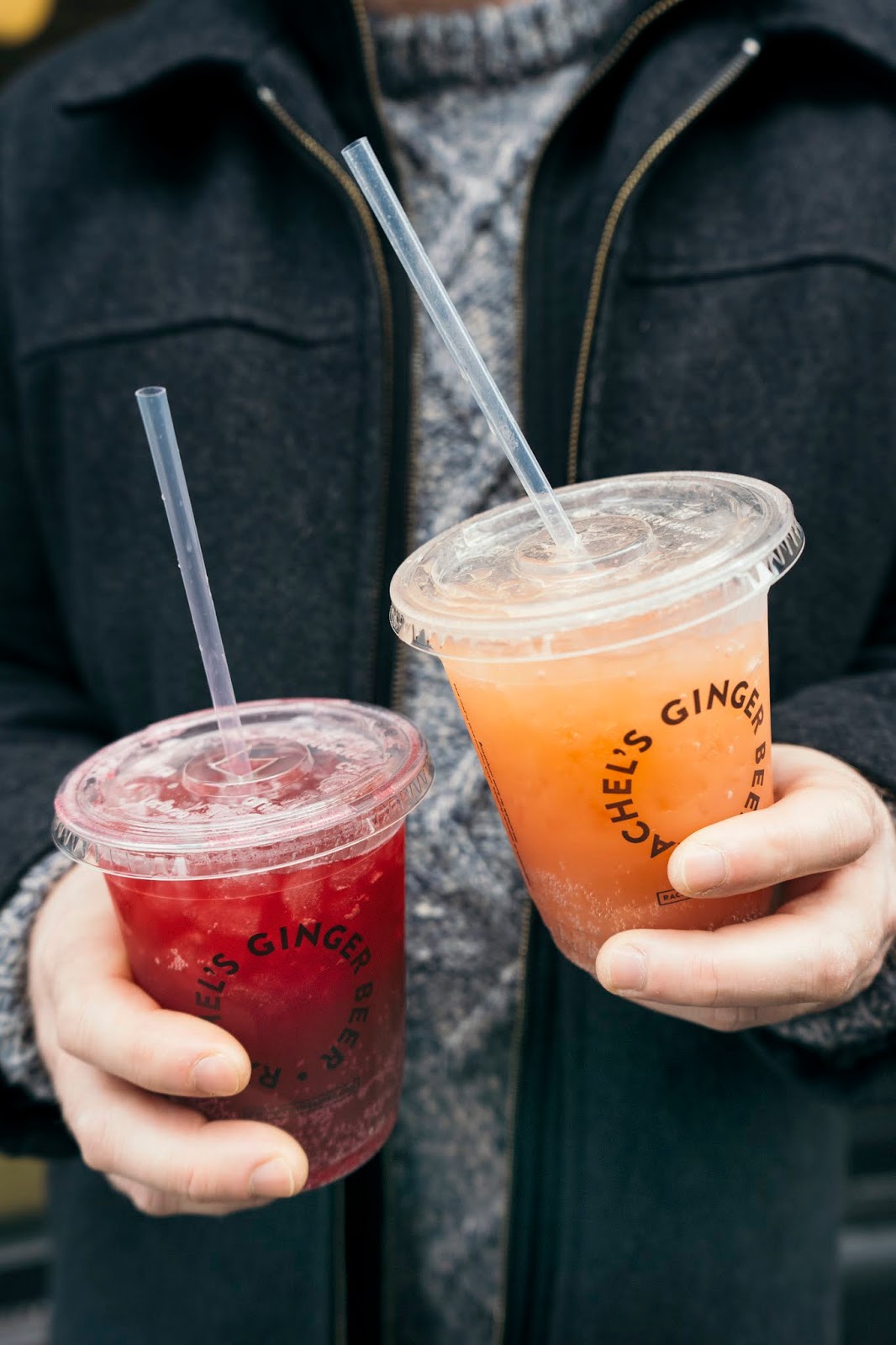 For our afternoon snack, we decided on two refreshing ginger beers from Rachel’s Ginger Beer, a Seattle institution that offers ginger beer in different flavors like vanilla passionfruit, pink guava, blackcurrant, and more. They have several locations throughout the city, that also offer fried chicken sandwiches and snacks from Ma’Ono. 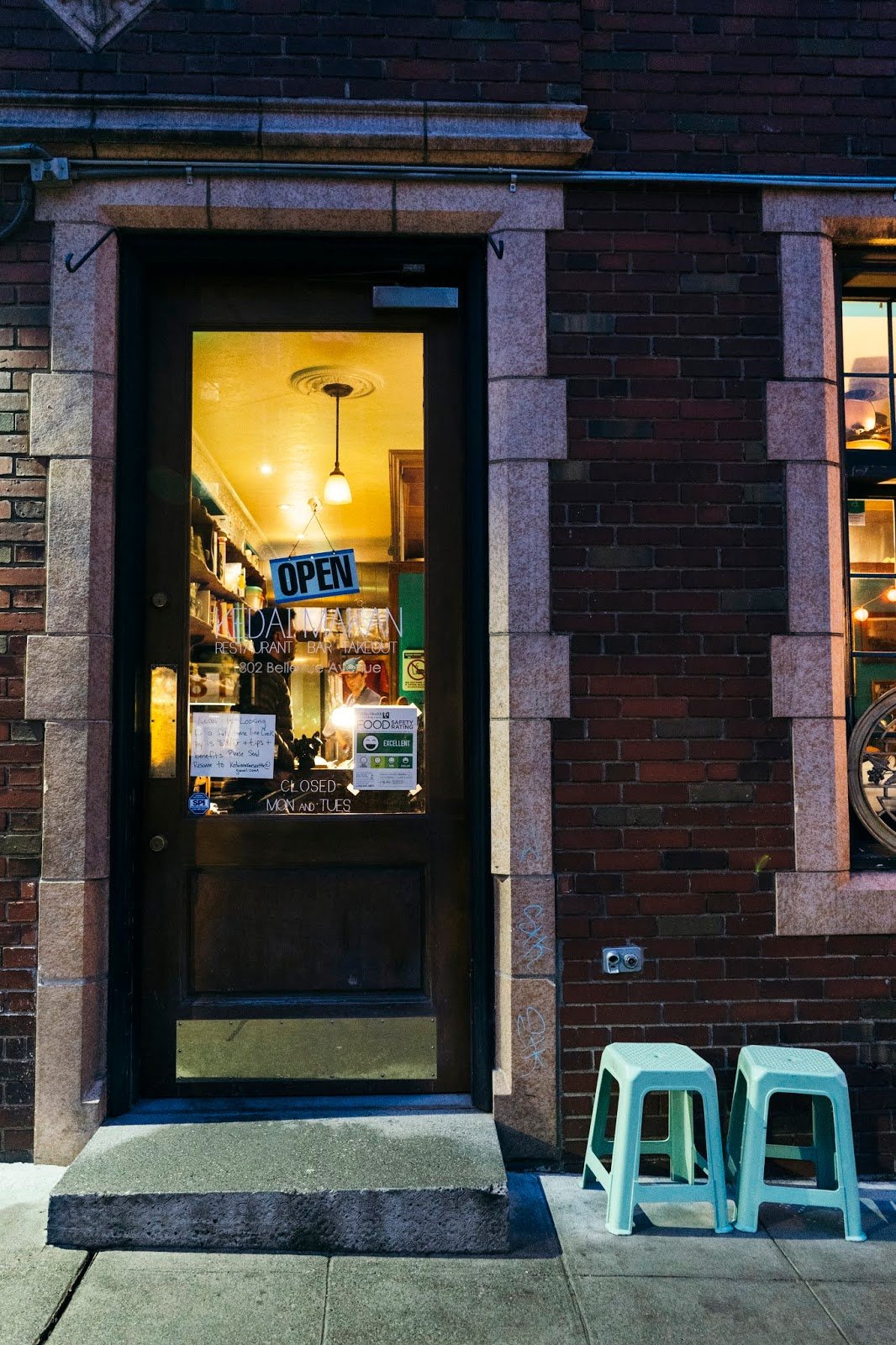 For dinner, we headed to Kedai Makan, a beloved Malaysian restaurant that started as a farmers market pop-up but graduated to its own brick-and-mortar spot in Seattle’s trendy Capitol Hill neighborhood. I recommend getting there early — it’s VERY popular amongst locals, and there was a line for a table at 4:45pm (the restaurant only opens at 5!). We managed to snag a table and ordered their famous roti jala (a soft, stringy crepe that you dip into a small bowl of lamb curry), nasi goreng kadai (Malaysian fried rice with Indonesian soy sauce, lots of crispy shallots, and a runny fried egg), and nasi biryani ayam (tapioca-battered fried chicken that you dip into a runny curry). 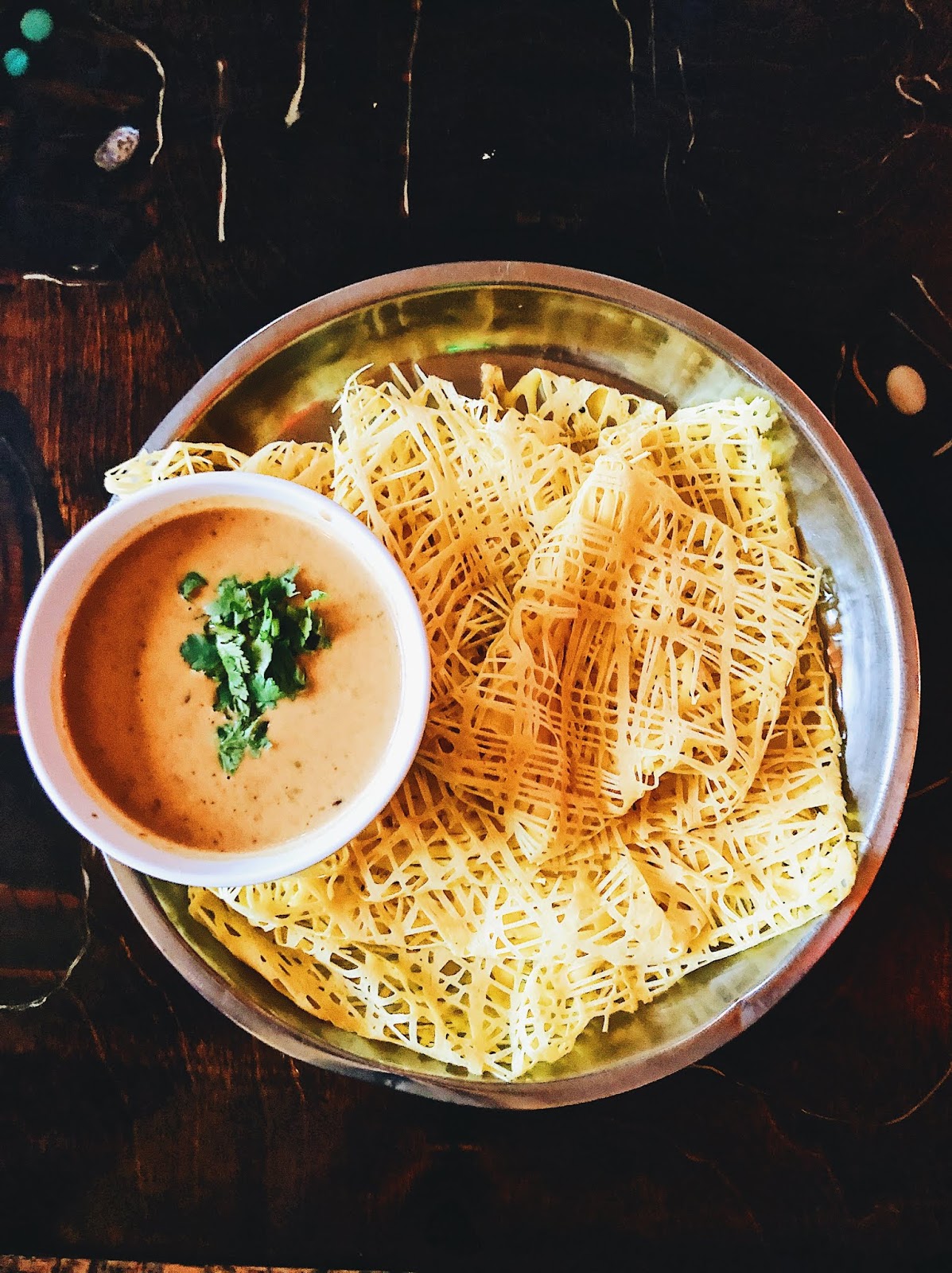 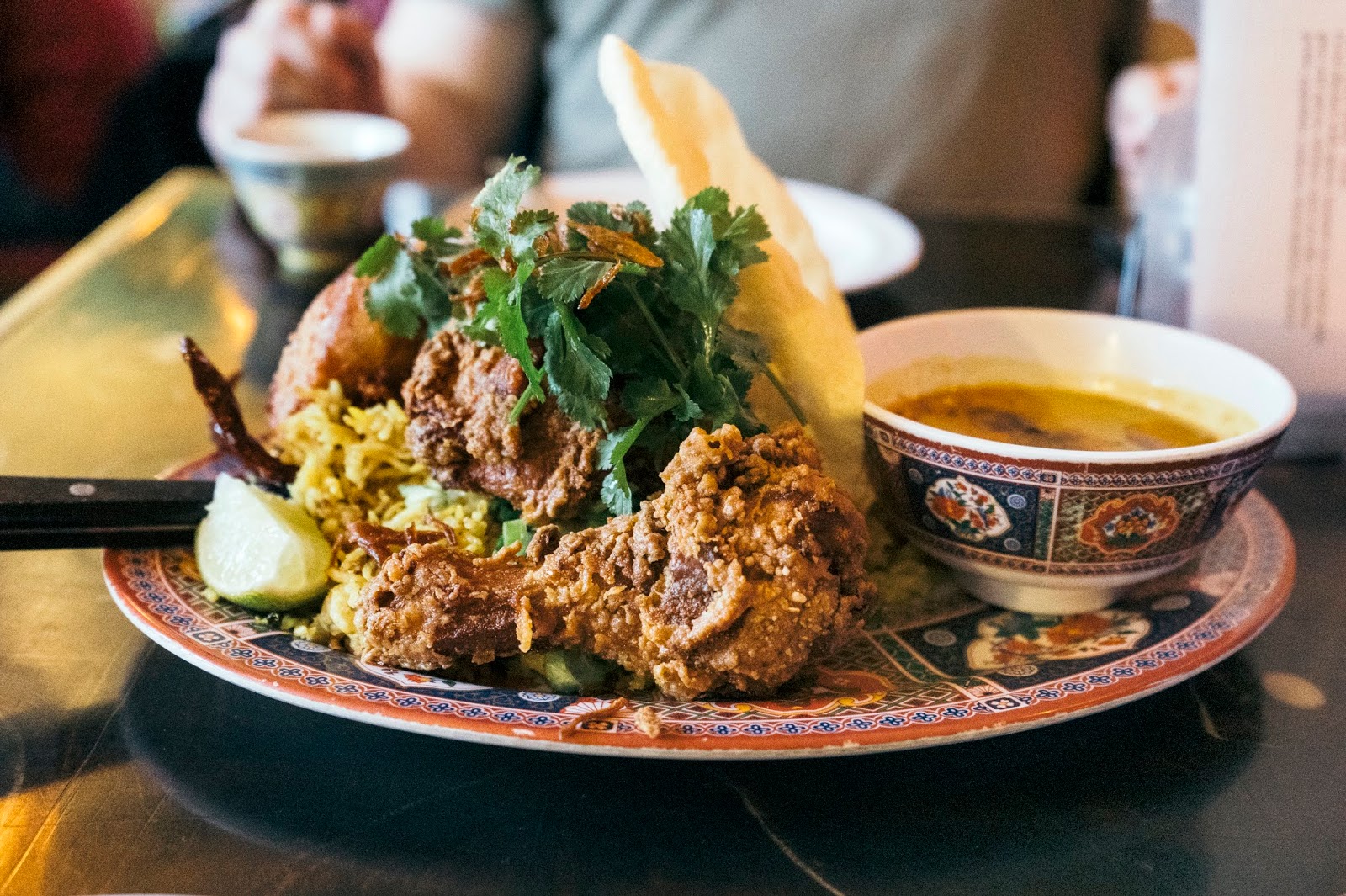 After dinner, we explored Capitol Hill’s Pike and Pine Streets, which are filled with cute little stores, bars, and restaurants. We stumbled upon Kurt’s Farm Shop in Chophouse Row, which is a tiny shop that makes their own cheese and ice cream from their herd of cows in nearby Vashon Island. After sampling their flavors (all were delicious!), Erlend got a scoop of smoky tomato ice cream while I settled on chocolate orange and a scoop of their famous Flora’s Cheese, which actually has chunks of cheese in it. And finally, because I am crazy, we circled back to Dino’s Tomato Pie for a late night snack: a slice of New Jersey-style Sicilian square pizza. Fun Fact: Dino’s is owned by Brandon Petit, the ex-husband of famed food blogger Molly Wizenburg of Orangette. I’d had dinner at Delancey, their original pizza restaurant, many years ago with Ashley, Molly, and Kristan and loved it. Dino’s was even better, complete with a fun, late night vibe — definitely worth saving room in your stomach for!

We started the day early and headed back to Capitol Hill to grab donuts at General Porpoise Doughnuts. I’d been wanting to try these donuts ever since Chef Renee Erickson brought some down for Feast Portland, and I was not disappointed. 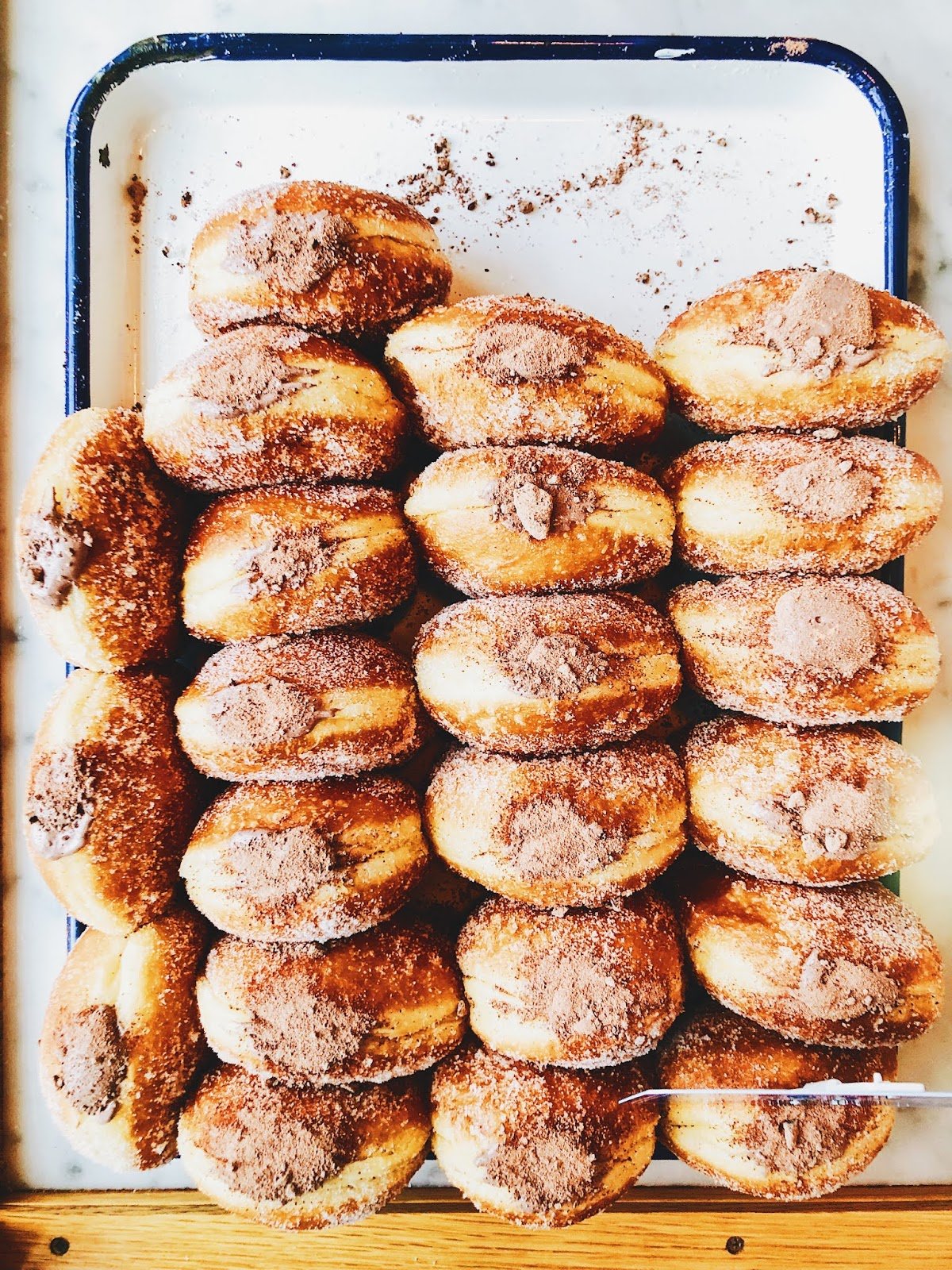 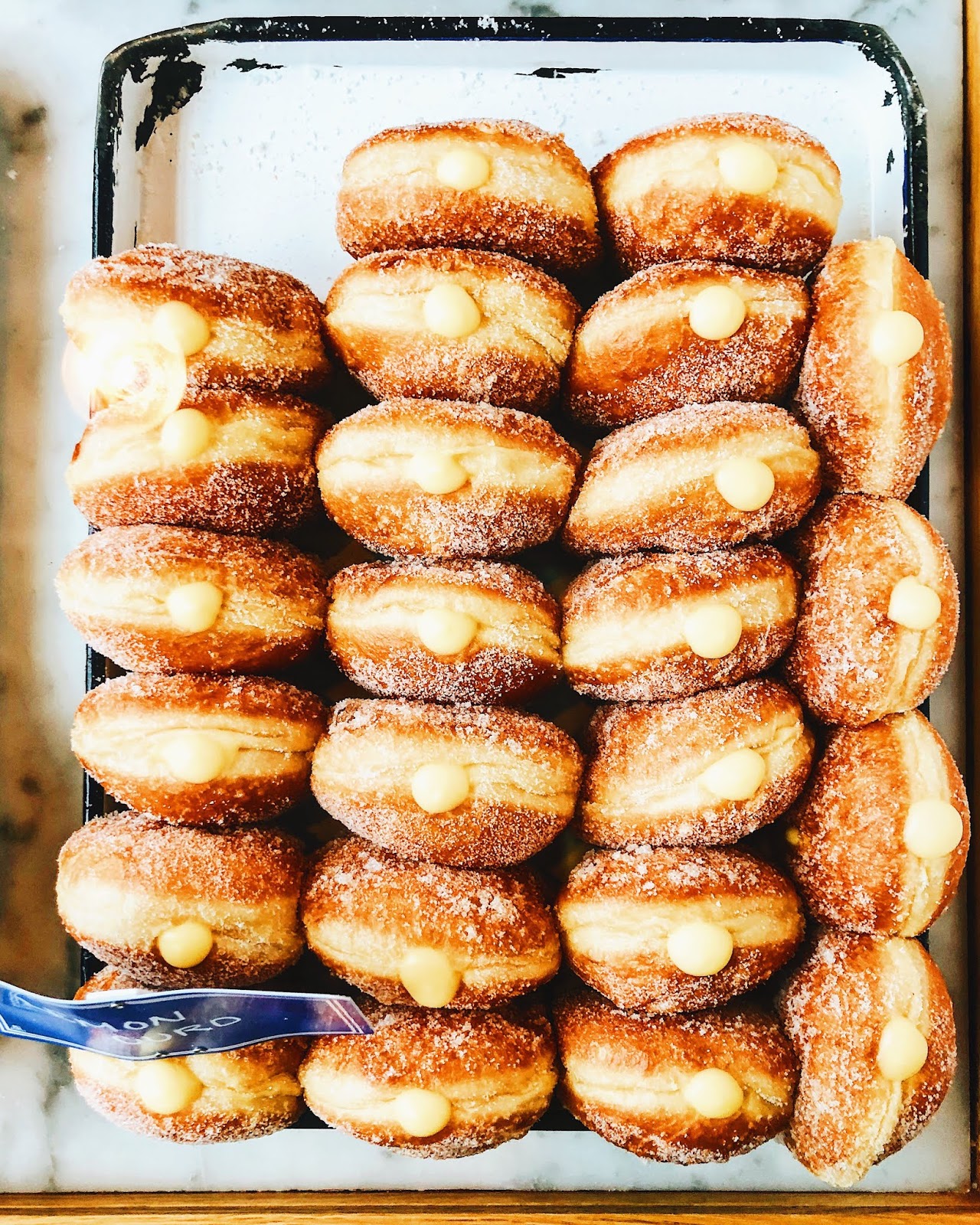 They only serve filled donuts (similar to Bread Ahead Bakery in London), and we tried four out of the five: Vanilla Custard, Honey Asian Pear Jam, Rose Pistachio Cream, and Lemon Curd. All were delicious, but my favorite was vanilla custard and Asian pear. To work off the sugar, we strolled over to Starbucks Reserve Roastery and Tasting Room, which is basically Starbucks on HIGH: everything is made out of slick wood and copper, specialty beans are roasted on-site (word on the street is that they have a bag of beans that costs around $800), and there’s a high-end Italian bakery and patisserie called Princi onsite. Unfortunately, I didn’t try any of these pastries since we were saving room for our brunch at Stateside. 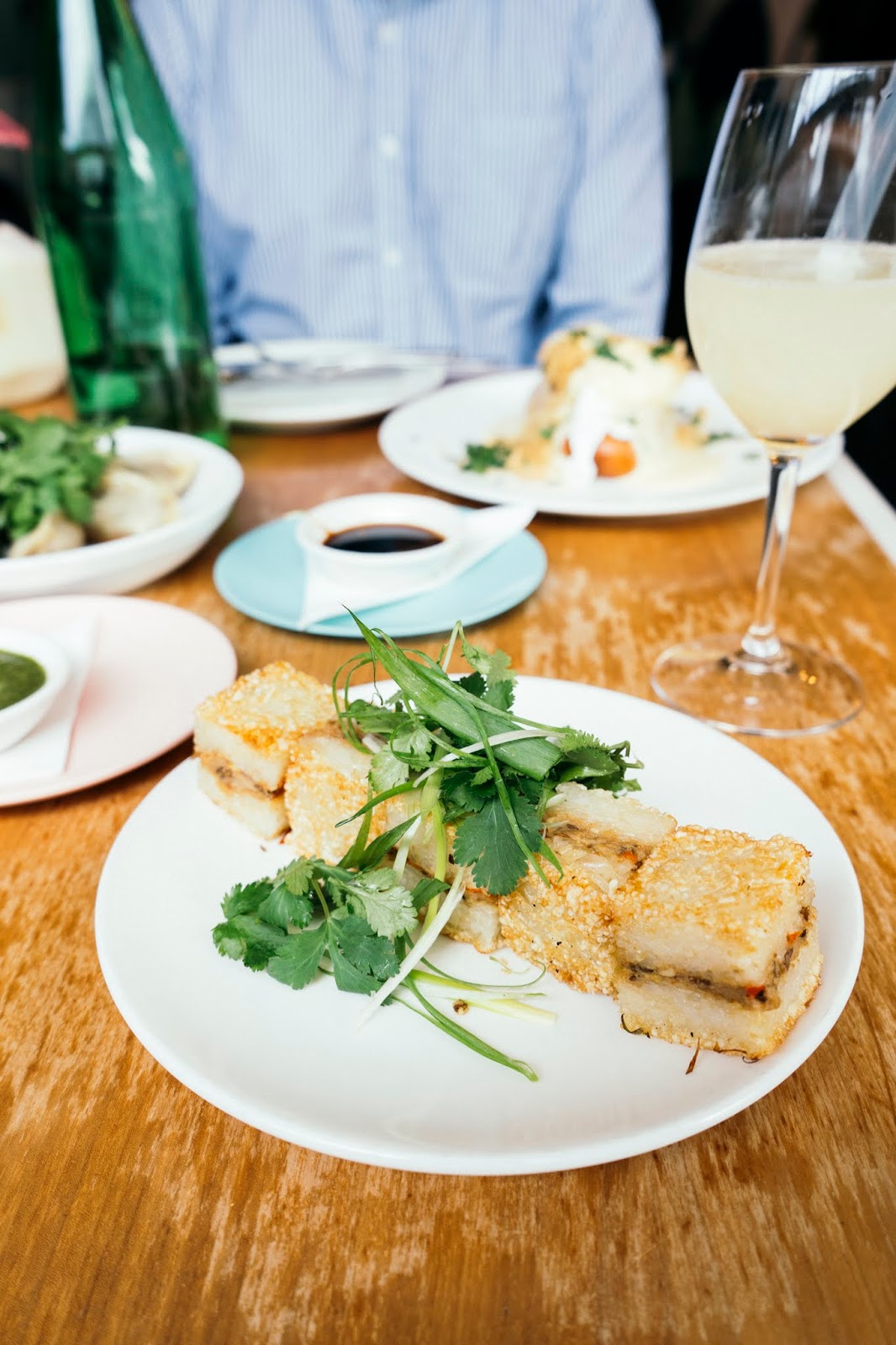 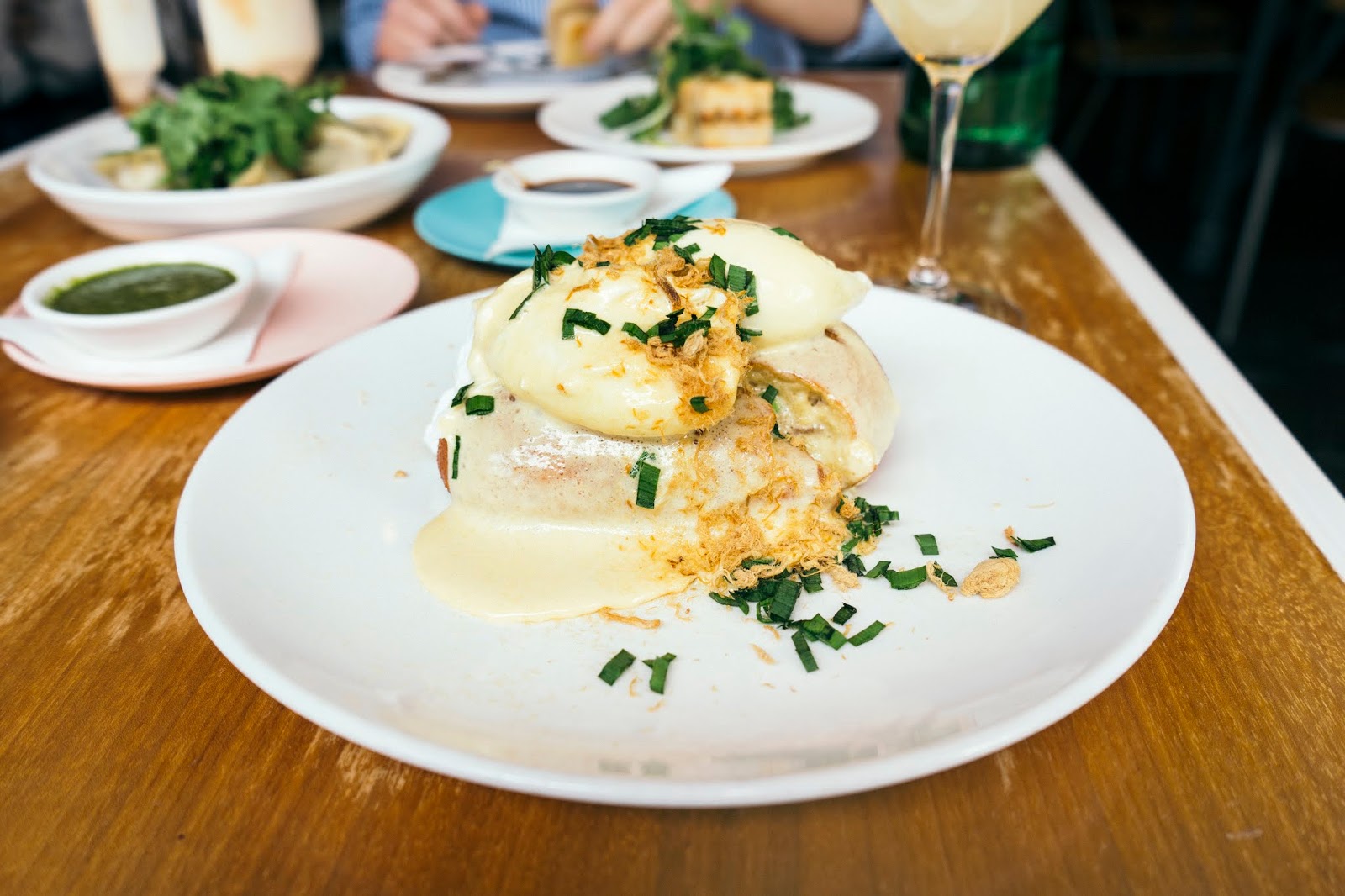 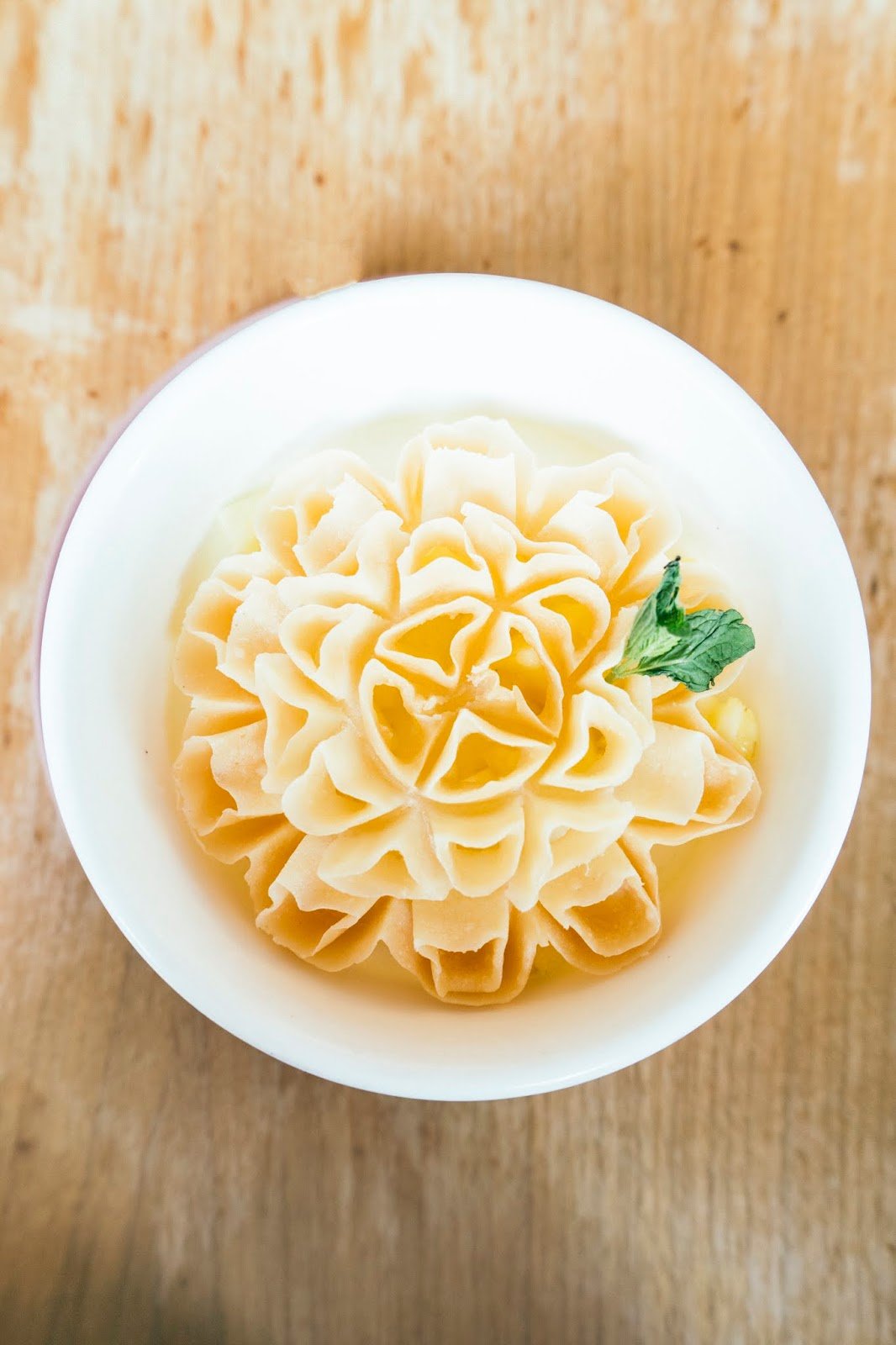 After brunch, we drove over to Ballard, a hipster neighborhood known for their locks and Scandinavian population. It happened to be the day of the Ballard Farmers Market, so we walked around admiring everybody’s adorable dogs and sampling meads, fruits, and even fish jerky from the various stalls. I also dragged us to Hood Famous Bakeshop, which is a Filipino American bakery known for their cheesecakes infused with Filipino flavors: 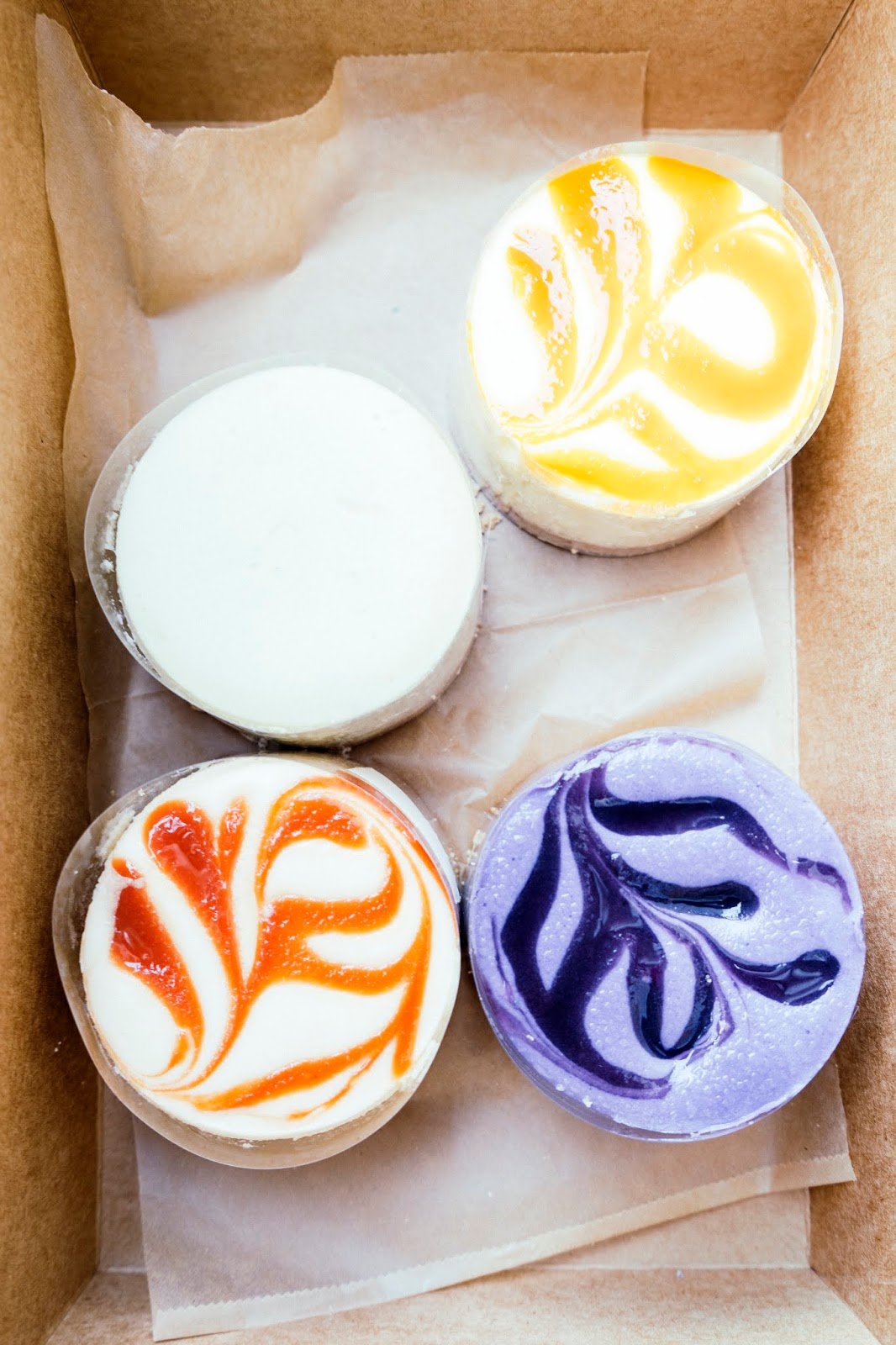 I picked up a mango calamansi, ube, white chocolate guava, and coconut pandan mini cheesecake. They are currently squirreled away in my freezer, awaiting consumption on special occasions. So excited to try them!

After our afternoon stroll, we headed over to the light and airy seafood bar The Walrus and the Carpenter to get our fix of cocktails and oysters. Similar to Kedai Makan, this spot is hopping and still incredibly popular, despite being a Seattle institution for many years now. Be sure to get there early (at around 4PM) to snag a table, or else prepare yourself for a long wait. We ordered a dozen oysters (their selection changes daily, but I recommend anything from Hama Hama Oyster Co), brussels sprouts, grilled leeks, and the fried oysters. It was perfect.

We started our day by driving over to Seattle’s Fremont neighborhood, which used to have a reputation as one of the “weirdest neighborhoods” in America due to its large artist and counterculture population. It’s gotten pretty gentrified over the years, but it’s still home to The Fremont Troll (a giant troll statue tucked under the Aurora Bridge) and a controversial statue of Vladimir Lenin. We picked up a coffee at Milstead Coffee Co, and then beelined over to Sea Wolf Bakers, which apparently makes croissants to rival Tartine Bakery in San Francisco. 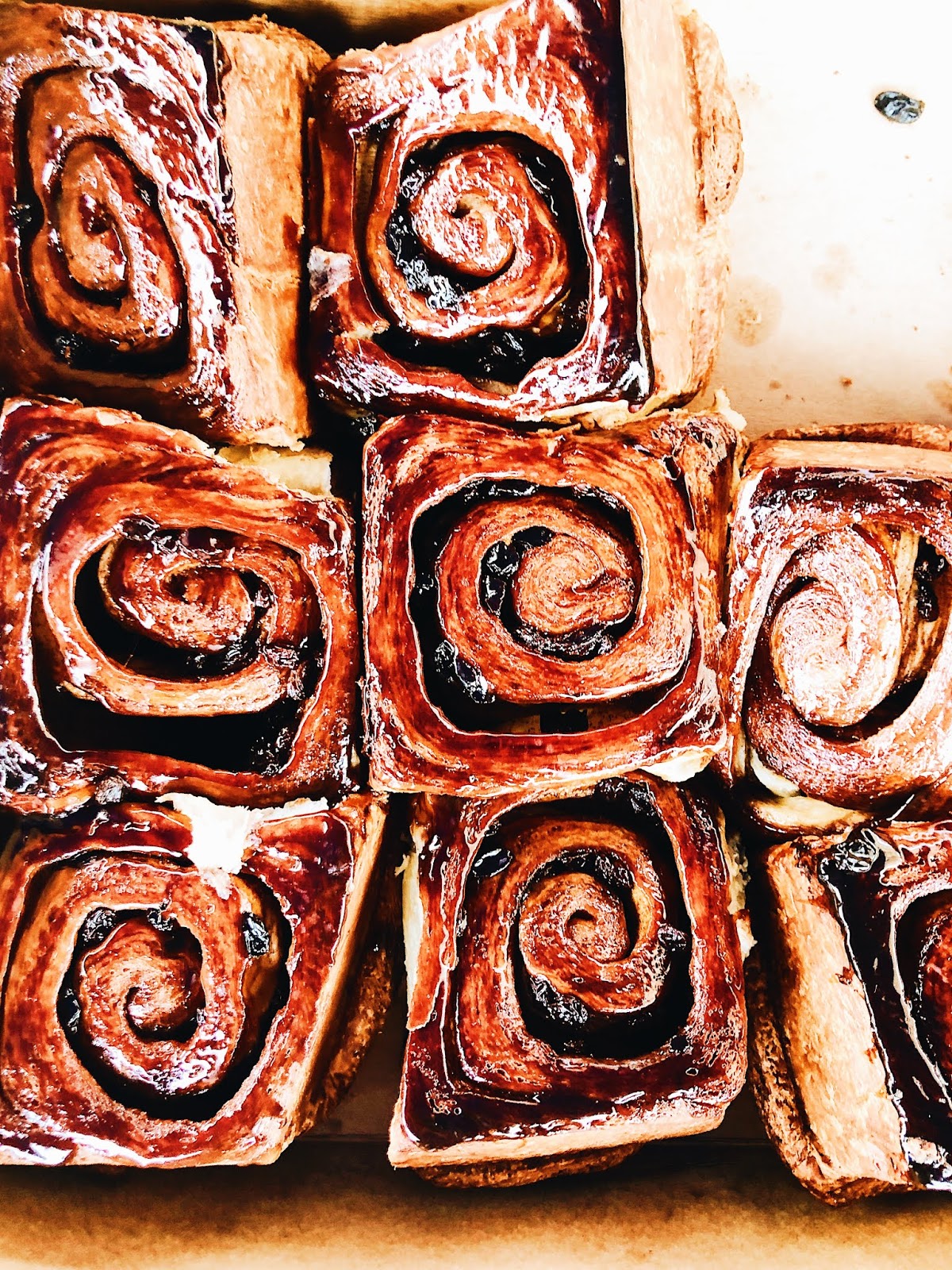 Once there, I immediately forgot about their croissants and opted to get one of their lacquered cinnamon raisin rolls. It was a bit on the pricey side (one cost $7, ahhhhh!), but totally worth it. Gonna try and recreate them for the blog soon!

After our morning in Fremont, we hopped back into the car to drive back to Portland. We did make a quick lunch stop before we left. We headed back to the International District to check out a famous hole-in-the-wall, Hương Bình Vietnamese Restaurant. The restaurant specializes in grilled meat skewers (I recommend the pork and meatballs!), which you can order over different sorts of noodles. Everything comes with piles of fresh herbs. It was wonderful and the perfect end to our 36 hours in Seattle.

Alright, so if you follow me on Instagram Stories, you’ll know that Erlend and I managed to snag a table at JuneBaby. If you’ve been living under a rock for the last few years and don’t know what JuneBaby is, here’s a quick refresher: Pete Wells of the New York Times wrote the restaurant a glowing review and awarded it three stars; Eater named Junebaby as one of the 38 most essential restaurants in the entire COUNTRY; and the James Beard foundation awarded Junebaby with two awards in the last year — “Best New Restaurant” and “Best Chef: Northwest” for its chef, Edouardo Jordan. But aside from all those accolades, most people will have heard of JuneBaby from their feature on the fried chicken episode of David Chang’s Netflix Show, Ugly Delicious. Their fried chicken is legendary and only served one evening a week — AND WE SNAGGED A TABLE FOR THAT VERY EVENING. 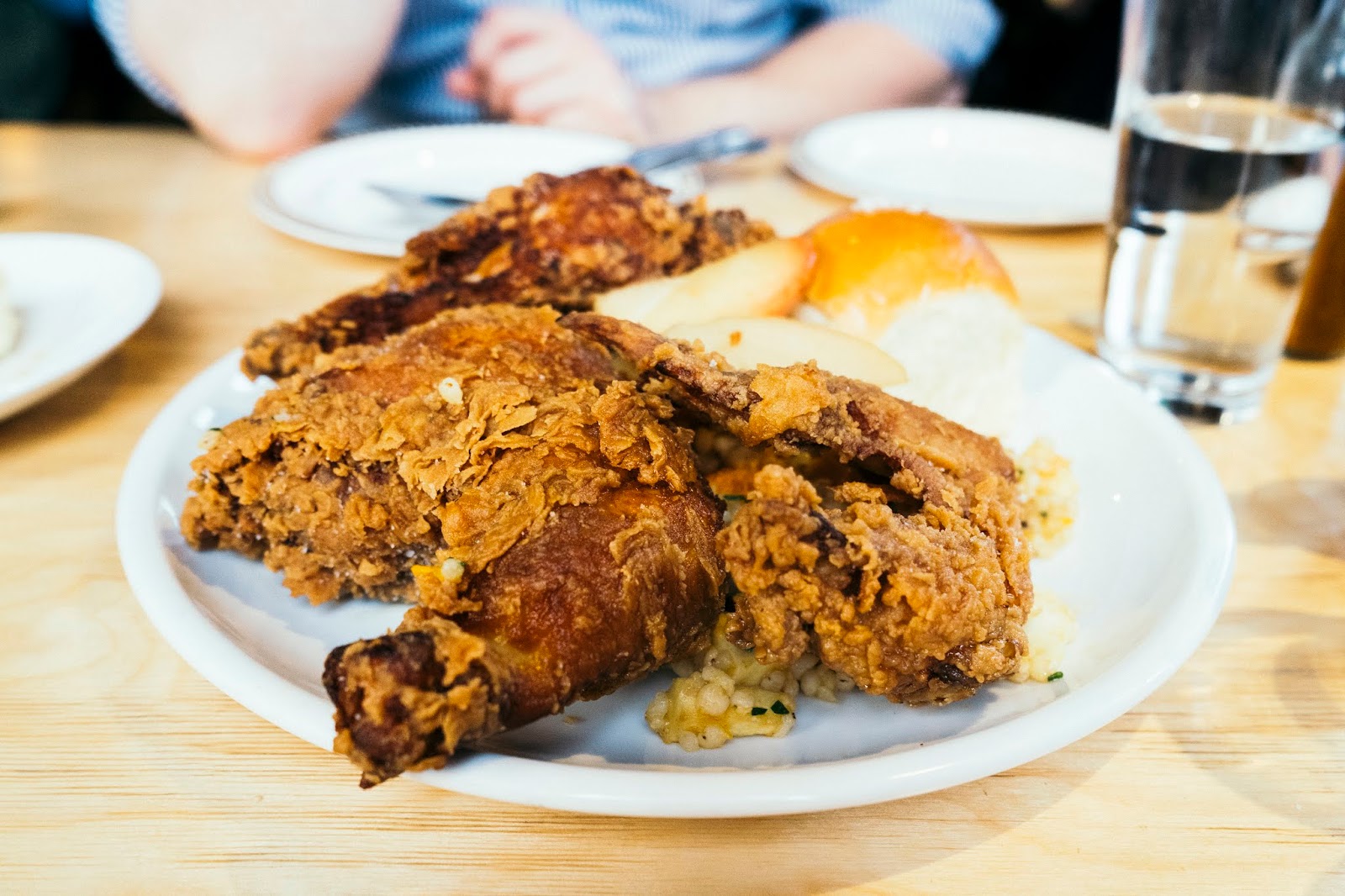 Our experience at JuneBaby was pretty epic. Ever since Ugly Delicious, JuneBaby has been selling out of their fried chicken by 7PM — impressive, given that the restaurant usually only starts taking orders for their fried chicken at 5PM. While doing research for our trip, I found a Seattle Times article that recommended arriving during JuneBaby’s “Moonshine Hour”, which runs from 3 to 5PM, and camping out at a table until they start serving the chicken. We arrived at 3:30PM, and the restaurant already had a few tables of people camping out. By 4:15PM, all the tables were pretty full. And at 4:30PM, I saw the hostess turning down folks at the door, telling them that the next seating for the fried chicken dinner wouldn’t be until 7PM or so, assuming they still had chicken left. INTENSE.

Was the fried chicken worth it? It was Very Good, but honestly, both Erlend and I were more impressed by everything else. In particular, I loved their crispy pig ears and smoked carrots with collard greens and tahini, which you can get any night of the week! Both were cooked perfectly and had such wonderful flavors: 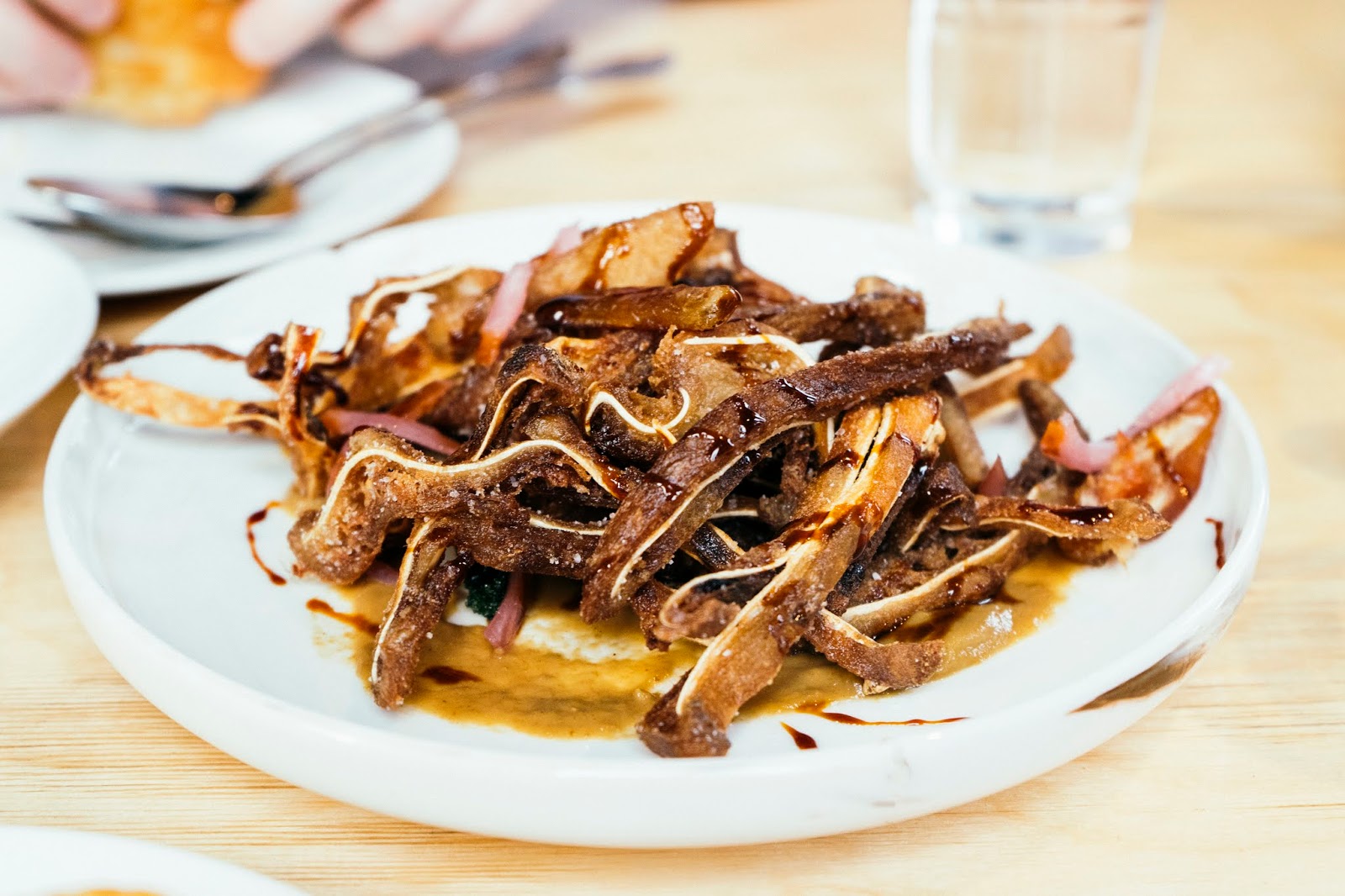 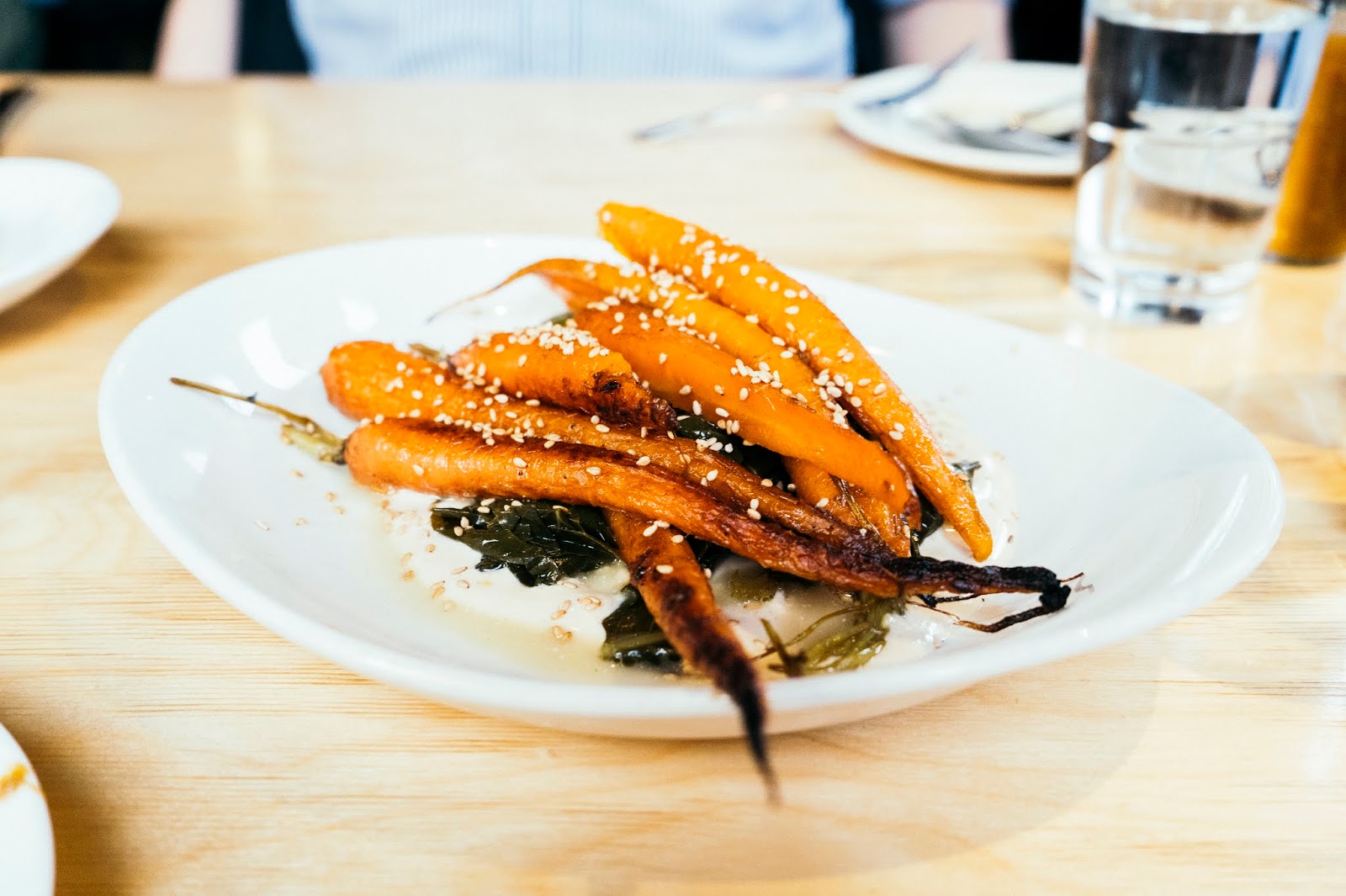 In addition to the fried chicken dinner, we also ordered some snacks and moonshine drinks from their limited Moonshine Hour menu: pimento cheese and homemade crackers, and Erlend was brave enough to order chitlins (if you want to know what that is, look it up — I’m scared to tell you). All in all, the whole thing was kind of a fun once-in-a-lifetime experience; we were literally at the restaurant for 3 1/2 hours (the length of our meals at Michelin-starred places like Eleven Madison Park, Momofuku Ko, and Casa de Cha de Boa Nova in Porto), the majority of which we spent waiting for fried chicken. And I’m not the most patient person in the world, so it’s rare that I’m willing to put in the time and effort to get into super hyped restaurants. But for JuneBaby? It was definitely worth it to do it once, just for those pig ears alone. 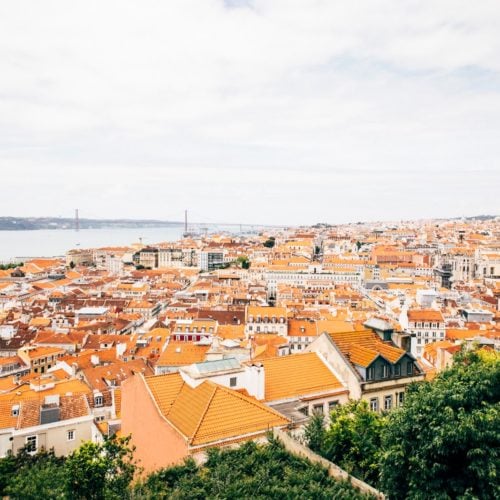