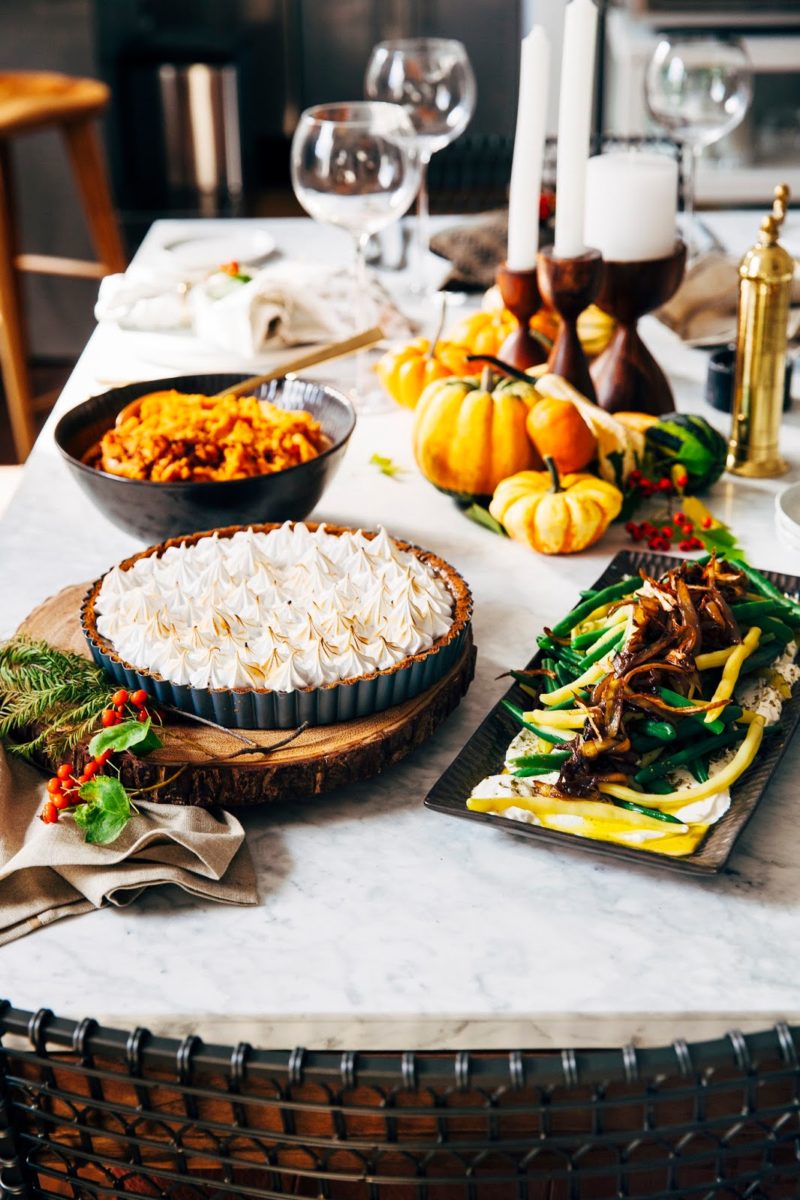 Hi friends! Happy (almost) Thanksgiving! Neither Erlend nor myself come from very traditional families, so we usually just spend Thanksgiving with each other and a small, quiet celebration. For the last few years, we’ve been roasting duck instead of turkey and doing Asian-style sides. Some people are weirded out by it, but it’s our jam. […] 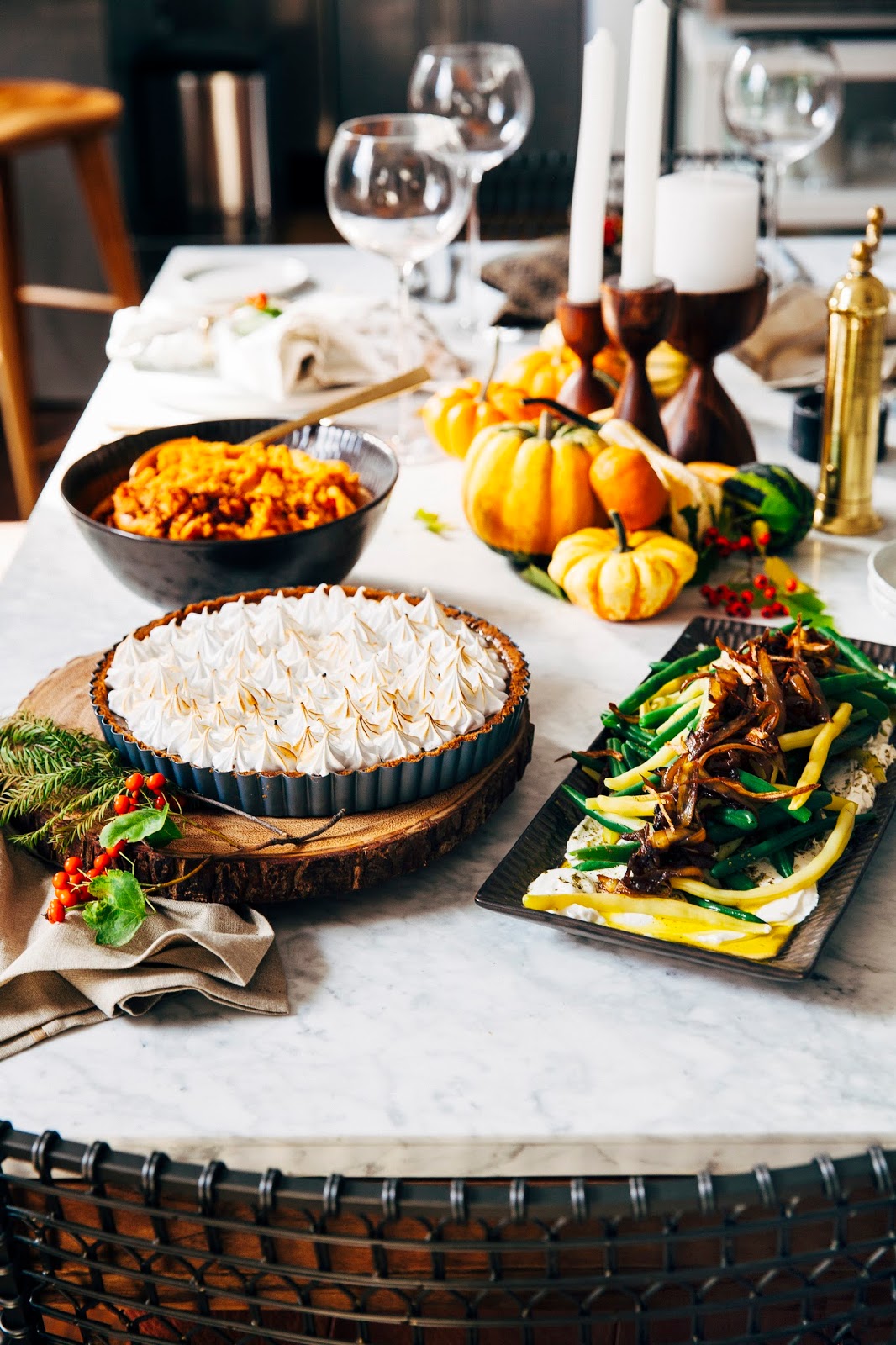 Neither Erlend nor myself come from very traditional families, so we usually just spend Thanksgiving with each other and a small, quiet celebration. For the last few years, we’ve been roasting duck instead of turkey and doing Asian-style sides. Some people are weirded out by it, but it’s our jam. Because here’s a little secret: I kinda, sorta, am not really that into turkey. Or stuffing. Or cranberry sauce. Or Thanksgiving foods in general.

I know, I know. I’m the worst. But I don’t know, the traditional Thanksgiving flavor combinations and ingredients just seem like they need some updating, ya know? Why have soggy brussels sprouts when you could have them momofuku style? Or a dry, overly large turkey when you can have a succulent, beer-roasted duck instead?

But alas, this year, we’re breaking our little not-so-traditional tradition and doing something much more normal: eating turkey with Erlend’s parents in the Upper West Side. And of course, I’ve been made in charge of the dessert. And instead of the cheesecakes, egg tarts, and matcha pies that I’ve often baked in place of all the traditional Thanksgiving desserts, I’m going somewhat old school with this pumpkin pie: 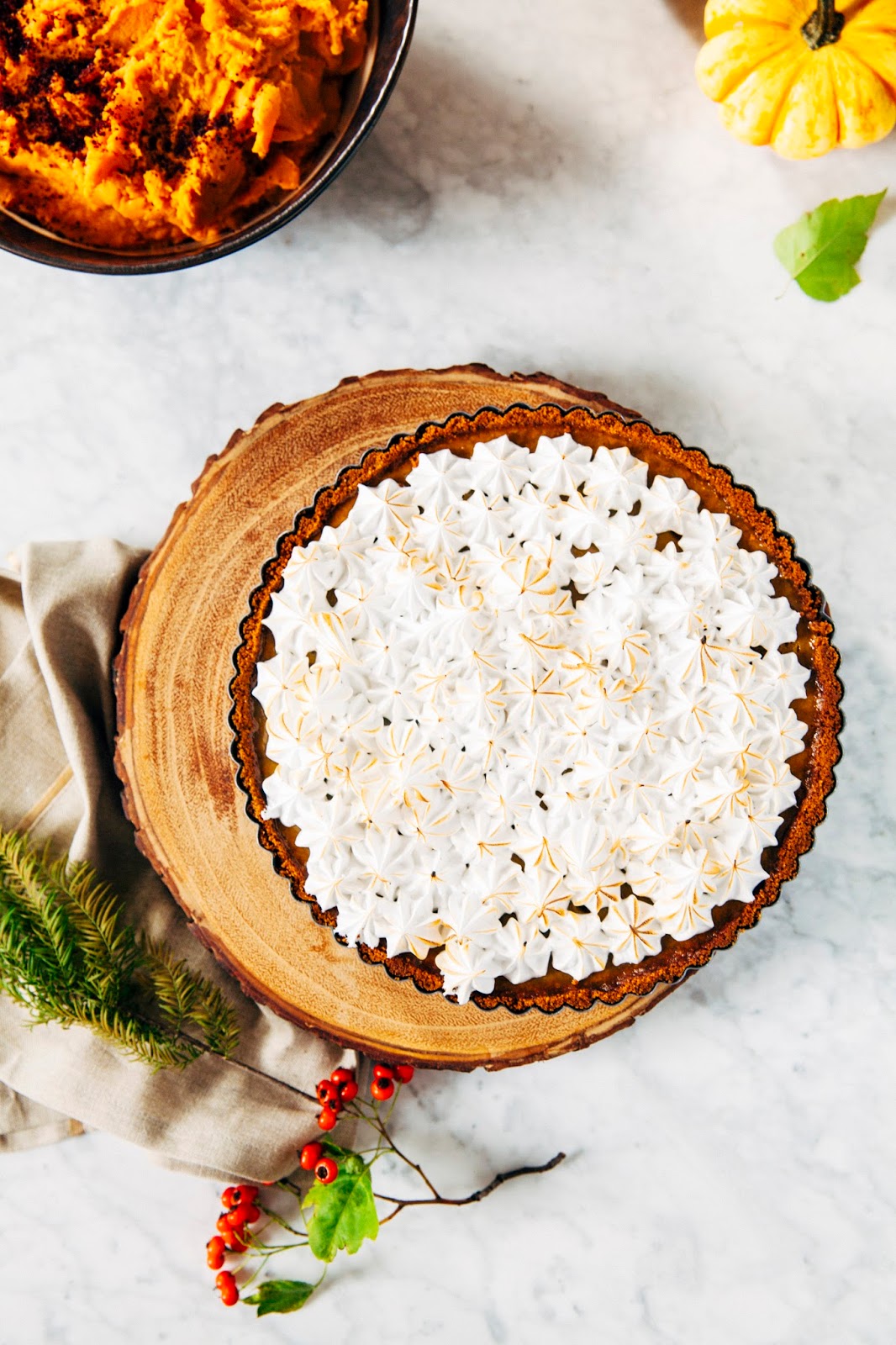 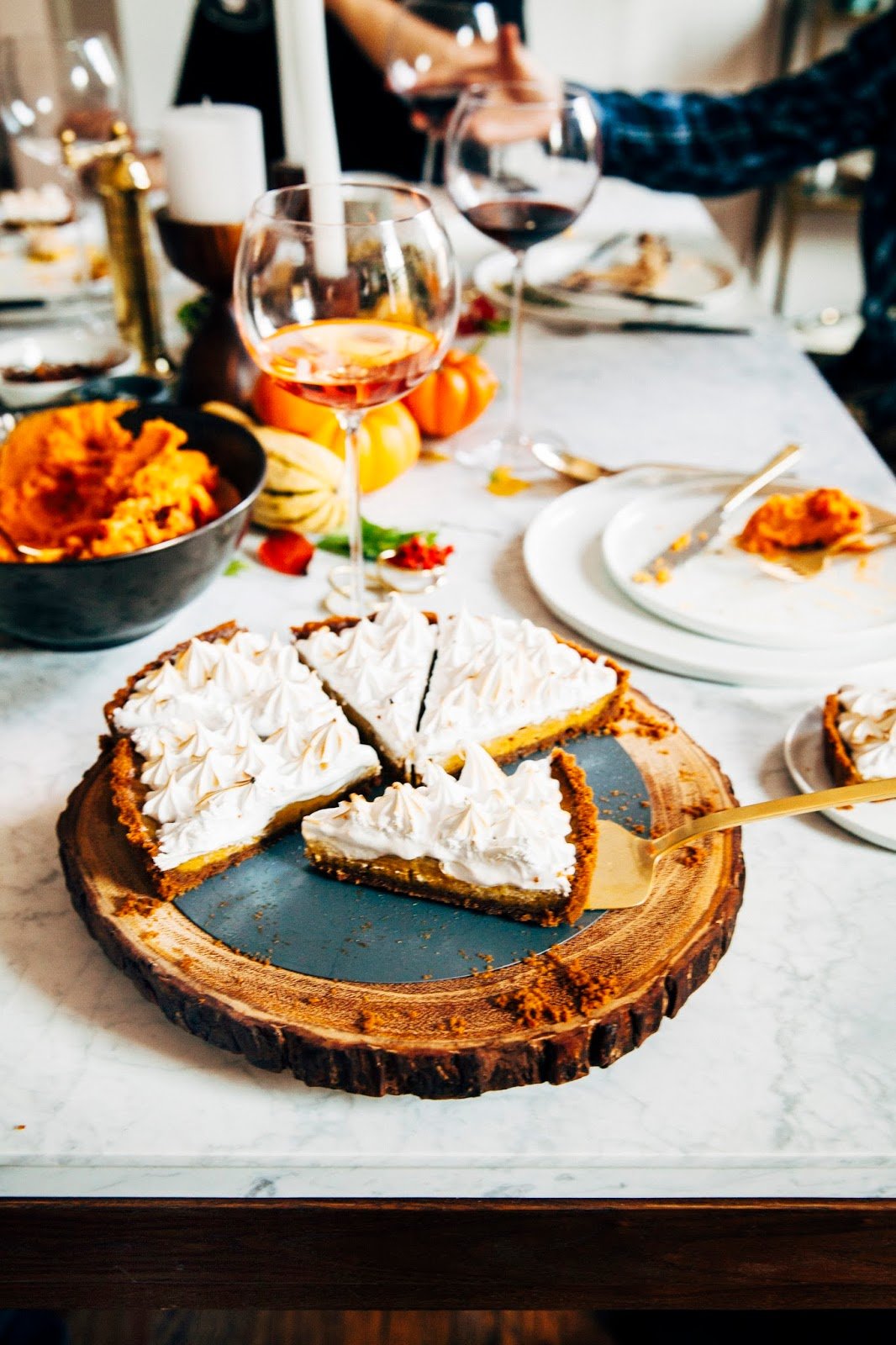 Okay, okay. With its speculoos crust and meringue topping, it’s not the most traditional pumpkin pie. And this’ll actually the second time in the last few months that I’ve made this pie. Because last month, I’d staged and styled a Friendsgiving photoshoot with some of my friends for Crate and Barrel (in the middle of October!). While I’m happy to spend time with Erlend and his incredibly sweet family, a part of me is a little disappointed that he and I are not doing the scrappy and somewhat rebellious dinner that we usually do. But luckily this (insanely) early Friendsgiving gave me the opportunity to get all that funkiness out of my system: 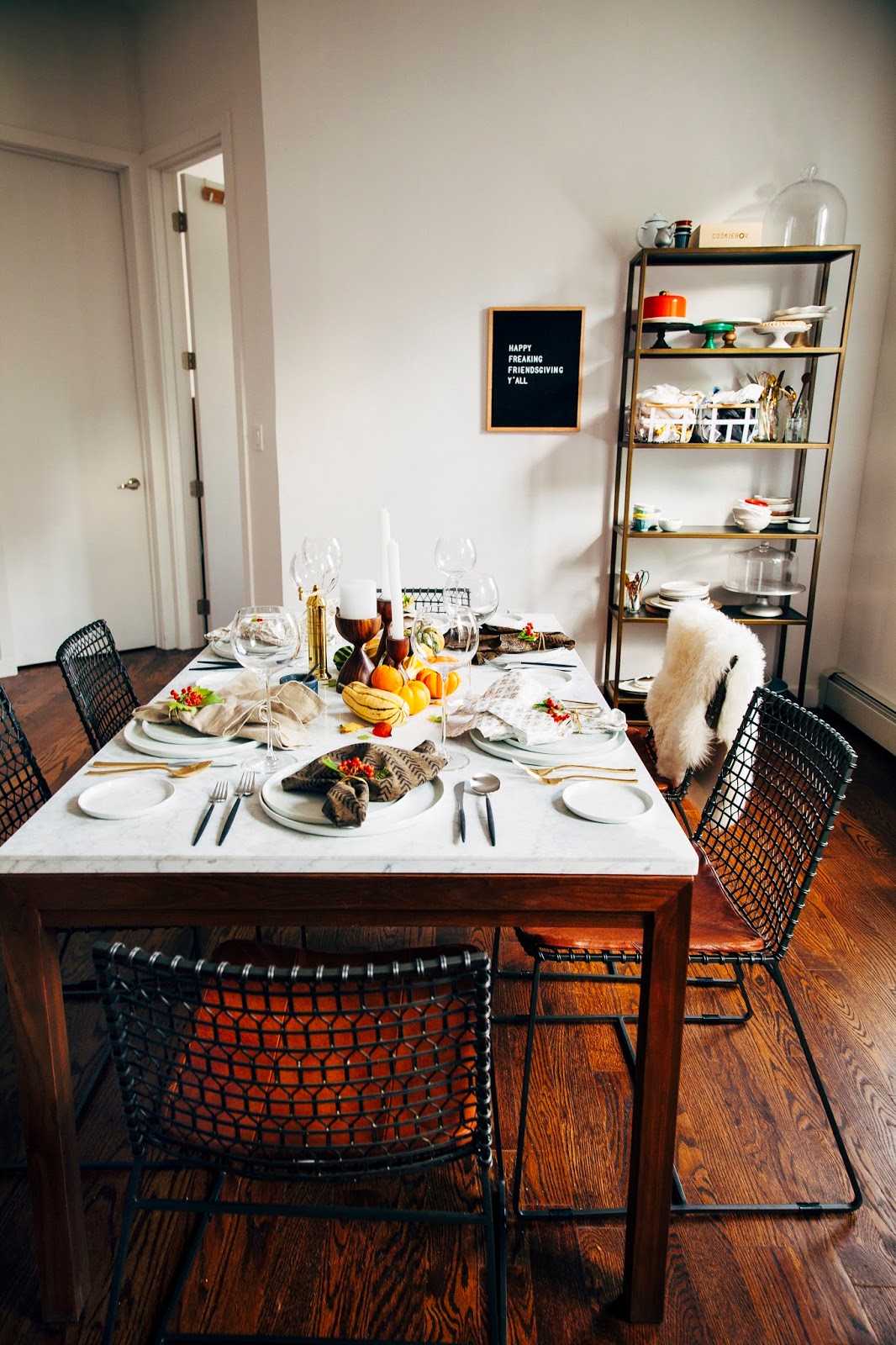 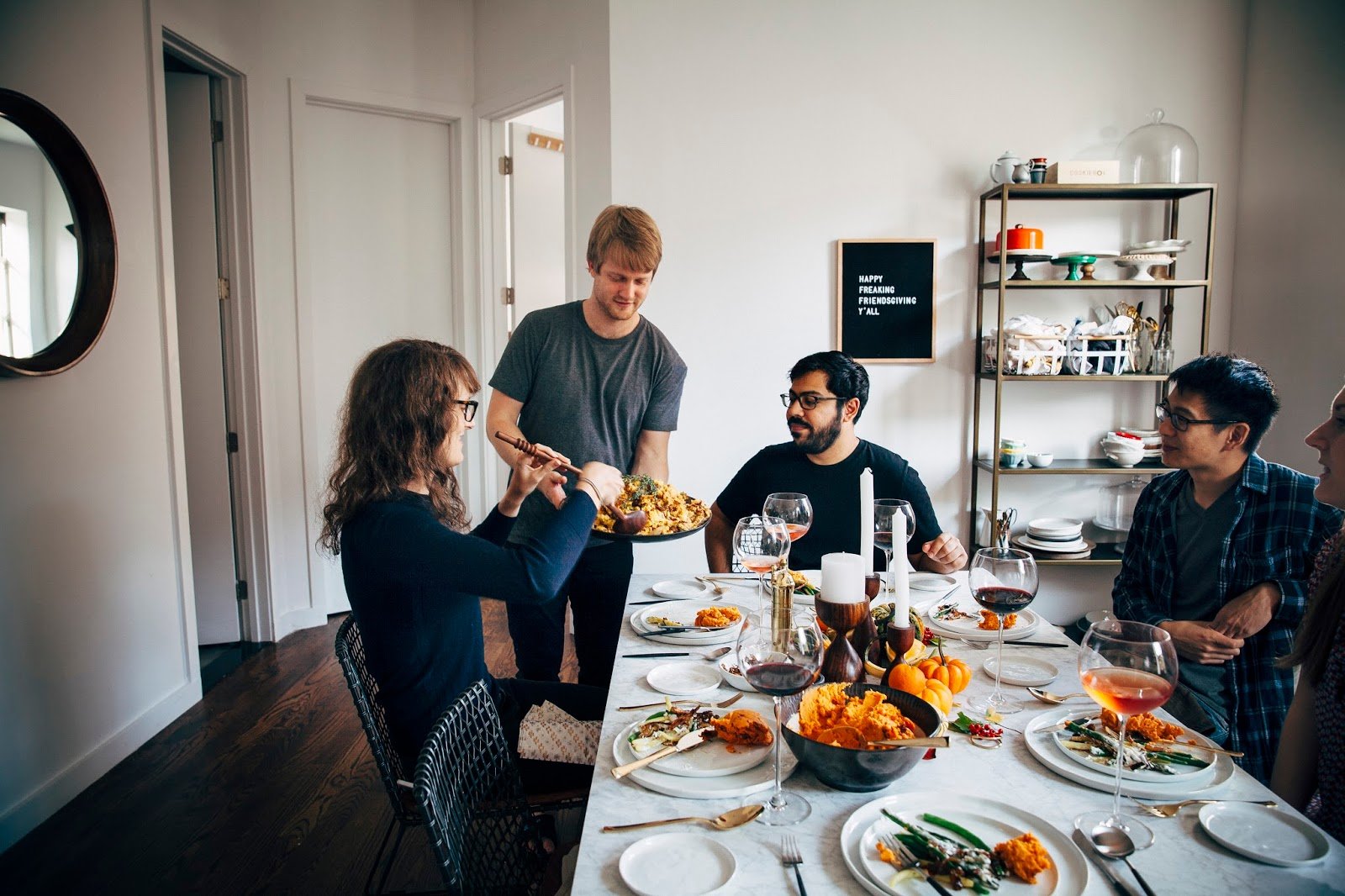 Anyway, be sure to check out Crate and Barrel’s blog to read more about my October Friendsgiving! I’ve got a cute little story about how each of the recipes were inspired by some of my oldest and newest friends, as well as a handful of tasty and vegetable focused sides like green beans with caramelized onions, labneh, and za’atar, cornbread stuffing with roasted corn, leeks, and bacon, and brown butter and orange zest mashed sweet potatoes. And of course, this pumpkin meringue pie, but you can also get the recipe down below. 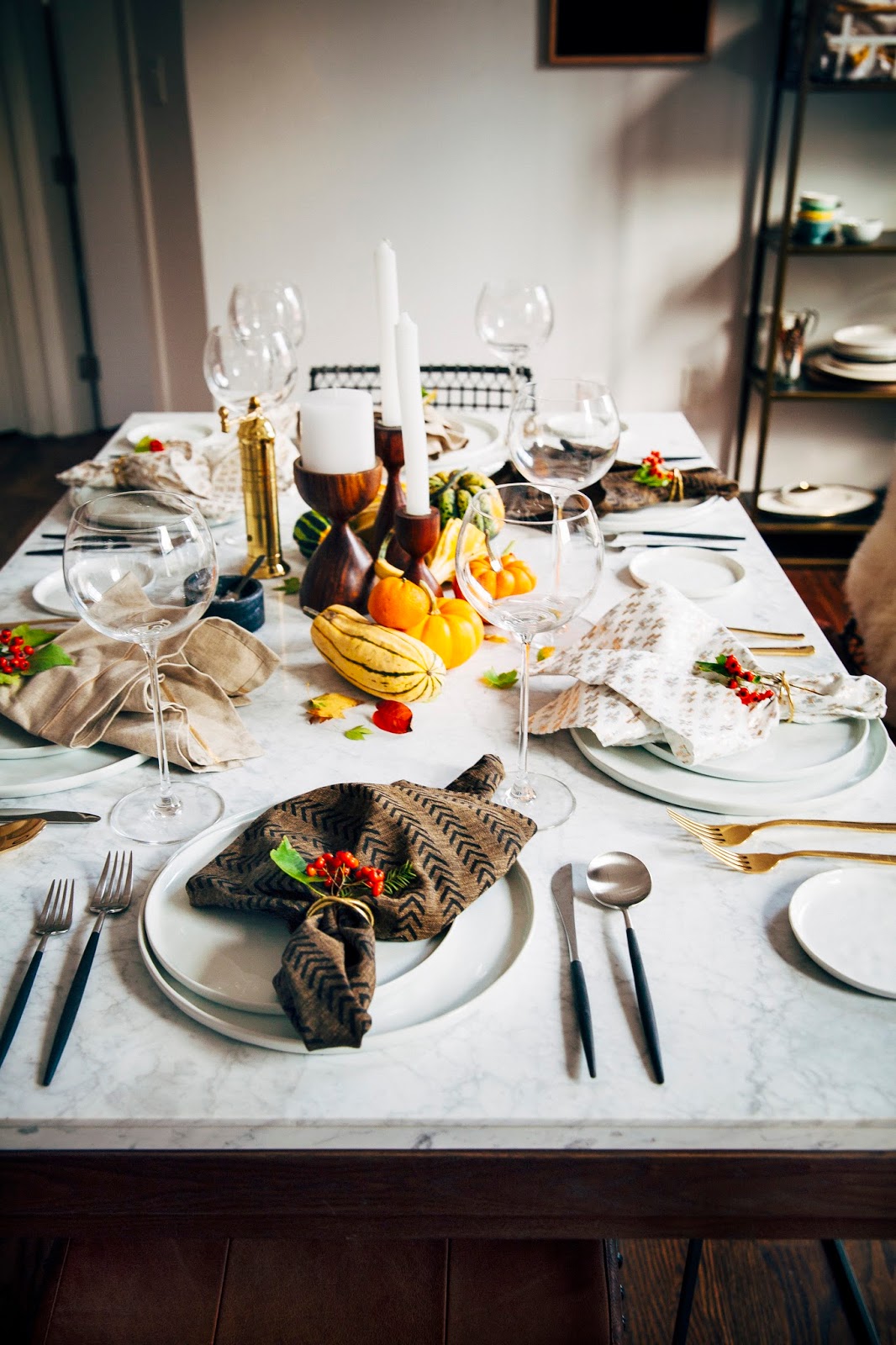 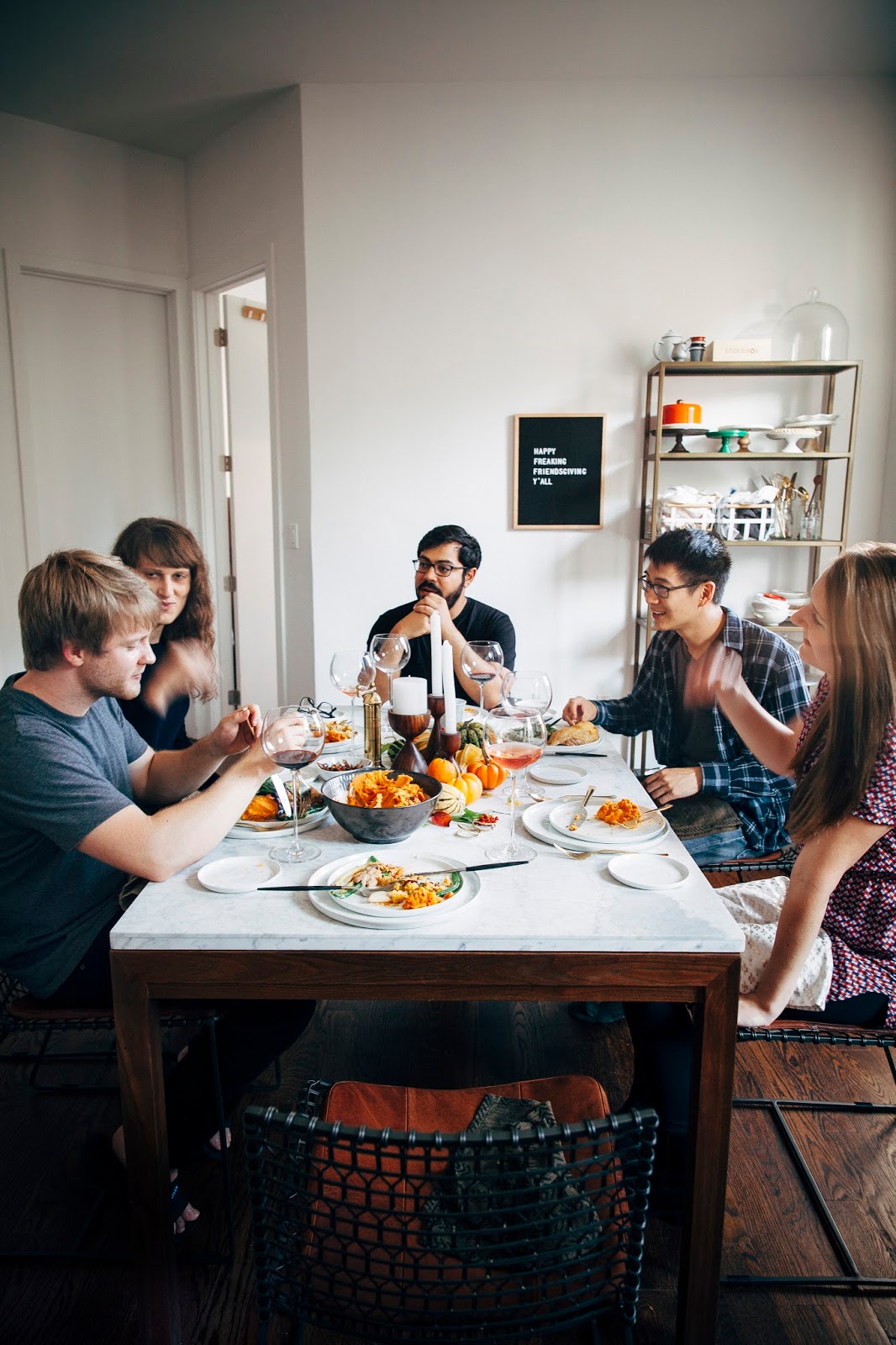 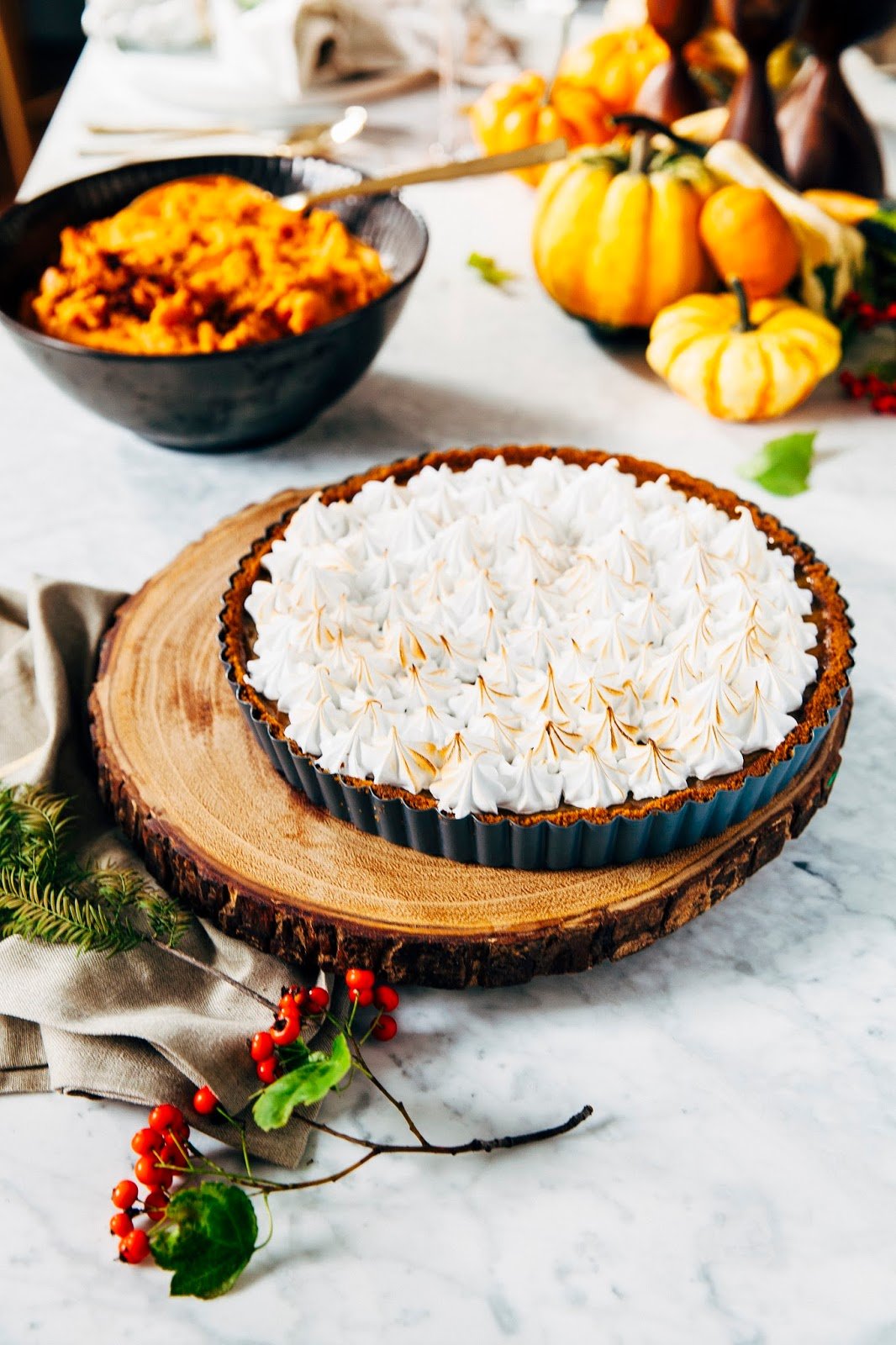 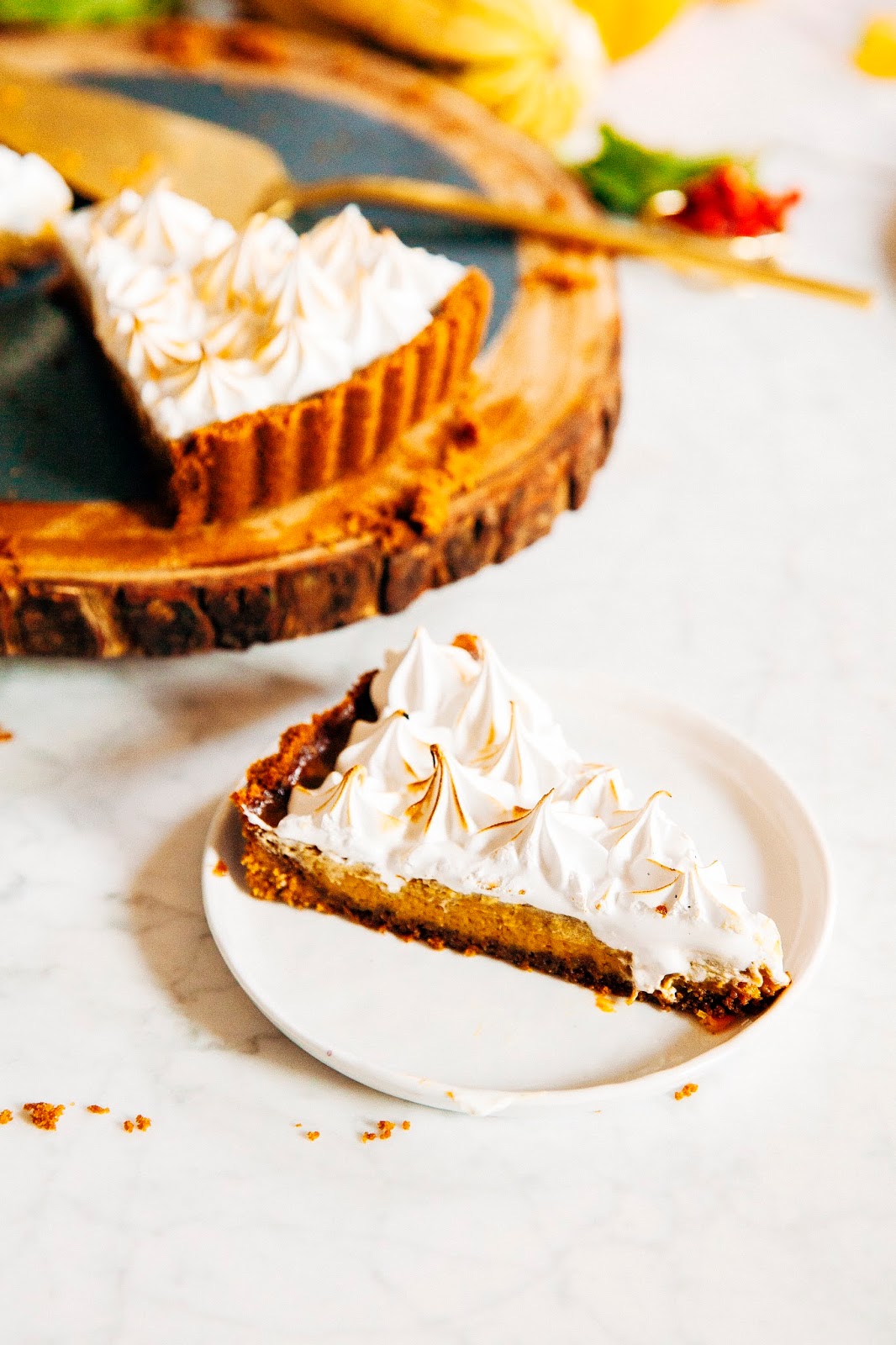 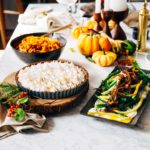 For the Speculoos Crust

For the Speculoos Crust