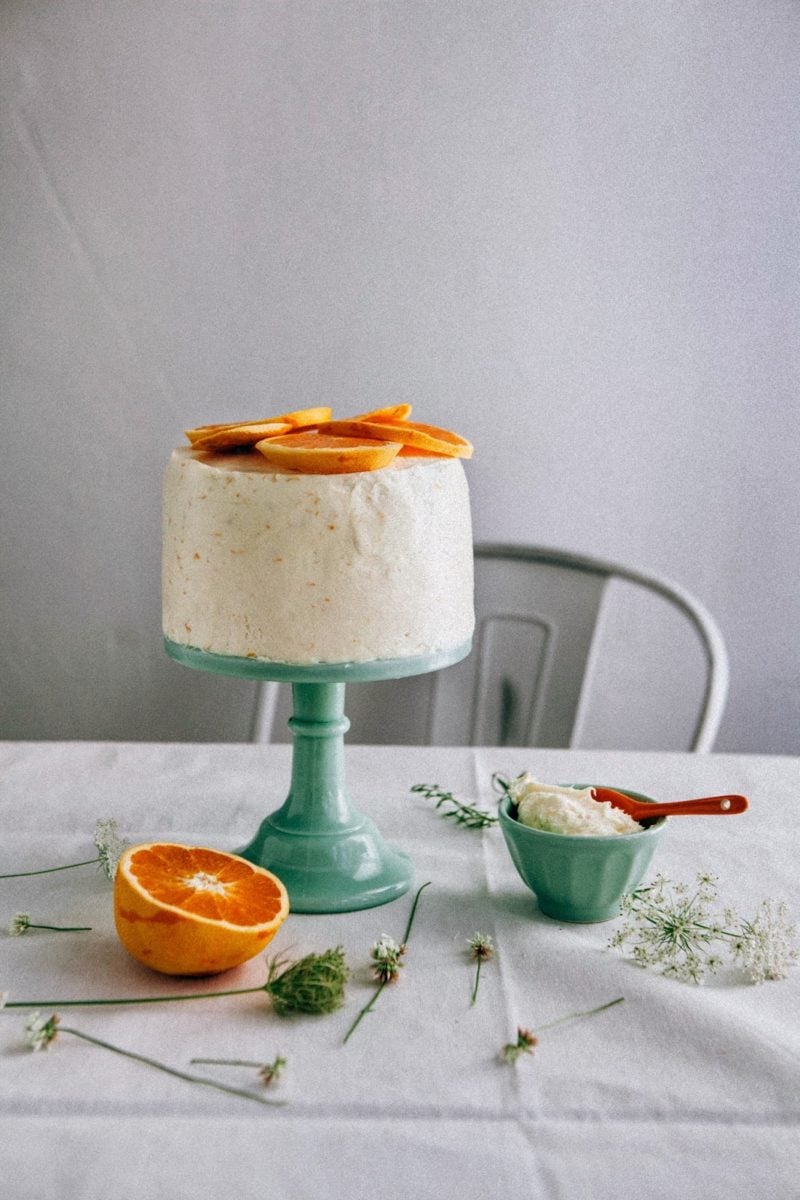 I have a confession. The truth is, this chocolate orange cake started out as a red velvet cake. You see, despite my love for red velvet cake, I’ve always been a little bit skeptical of its components. According to a Wikipedia article on its origins, the first red velvet cake recipes contained beet juice which […] 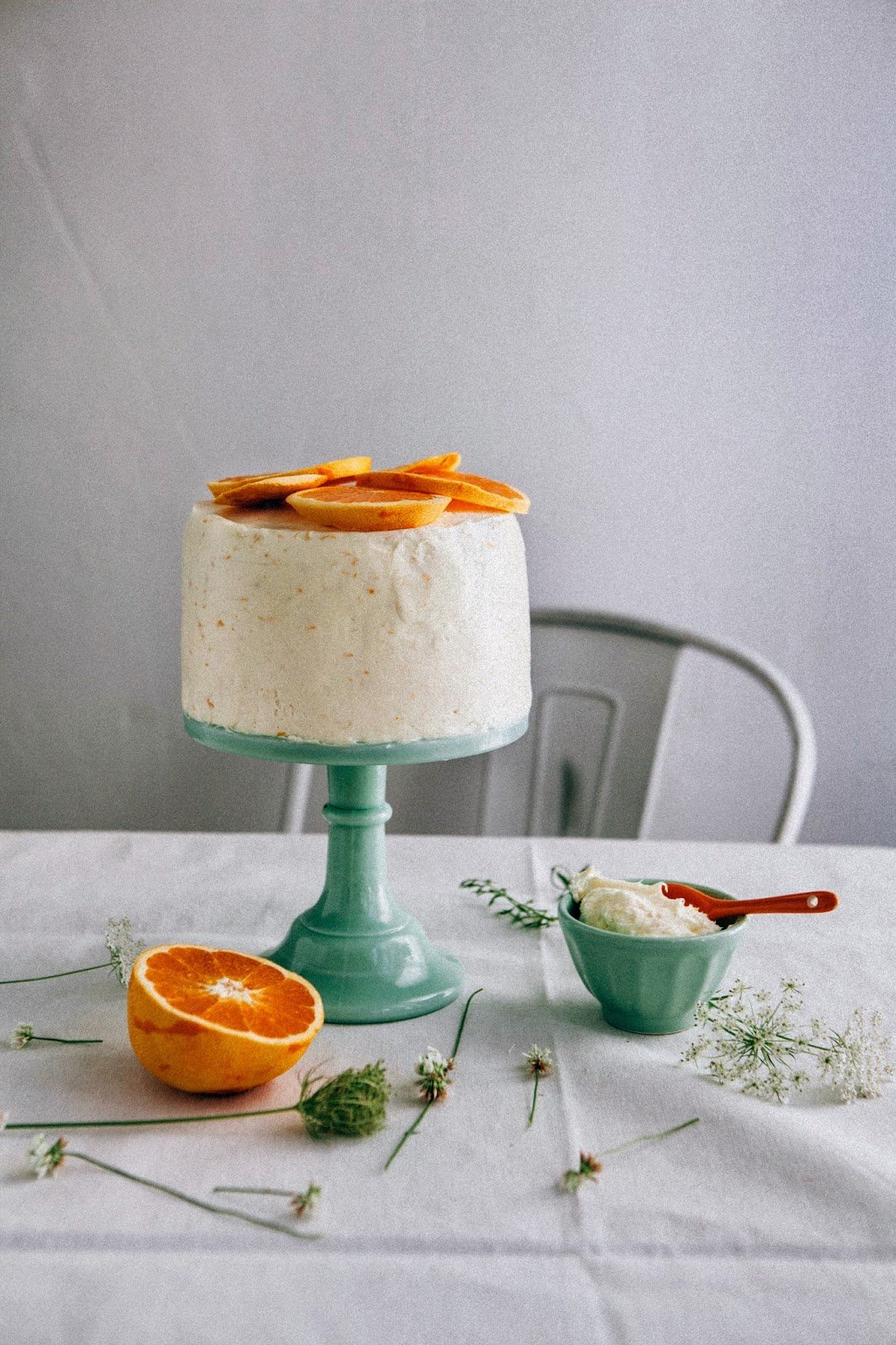 I have a confession.

The truth is, this chocolate orange cake started out as a red velvet cake. You see, despite my love for red velvet cake, I’ve always been a little bit skeptical of its components. According to a Wikipedia article on its origins, the first red velvet cake recipes contained beet juice which gave the cake its reddish tones. There are other varying origin stories (like the famous Waldorf Astoria version in which the lady is charged a fortune for asking for the recipe), but the beet one makes most sense to me. 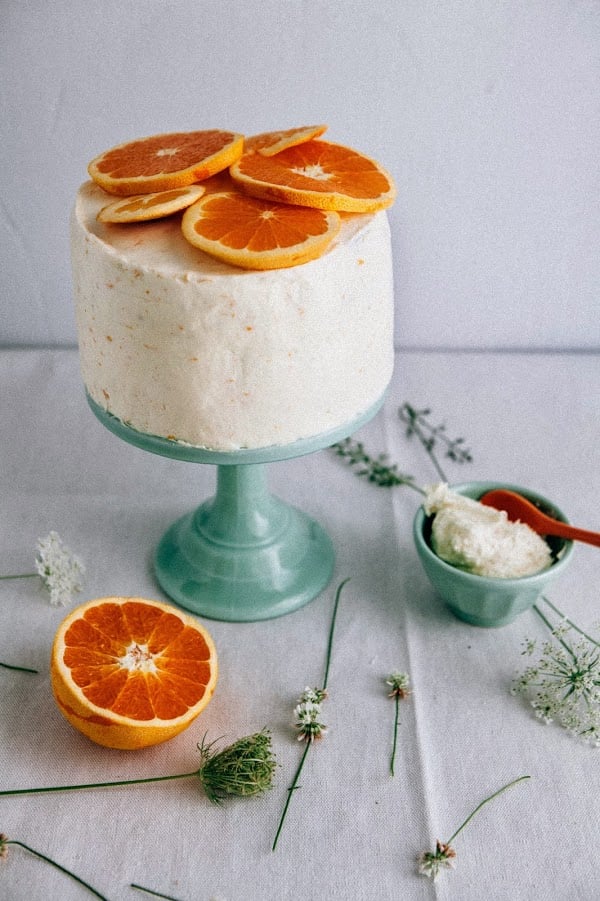 One thing I’ve often struggled with is how to describe red velvet to those who have never had it before. I’ve heard others try to describe it as “a cross between vanilla and chocolate cake”, but that doesn’t seem sufficient. But my own explanation of “red velvet’s unique flavor comes from the way it’s leavened, the reaction between the acidic vinegar and the alkaline cocoa powder and baking soda” tends to glaze over most people’s eyes. Sure, it’s scientific and all, but I’m not sure if the reaction actually causes the flavor. Because the best red velvet cake I ever had doesn’t really fit either of those descriptions.

I came upon the best red velvet cake I’ve ever had by chance. It wasn’t anywhere especially fancy or even renowned for dessert; instead, it was a small hole-in-the-wall barbecue joint near Columbia University in New York City. They’ve since gone out of business, which isn’t all that surprising because their barbecue was thoroughly mediocre at best. But I didn’t care much for their barbecue, nope — instead, I went for their red velvet cake. It was outsourced from a bakery in nearby Harlem (which I sadly, do not remember the name of), and it was the best red velvet cake I’ve ever eaten in my life. The color was a deep, dark maroon and the cake tasted predominantly of chocolate with a hint of orange. All of this was topped with an incredibly light and fluffy buttercream frosting with that same subtle, almost elusive essence of orange (which I was surprised to find I adored, especially considering that I firmly believe that red velvet should often be topped with cream cheese frosting). 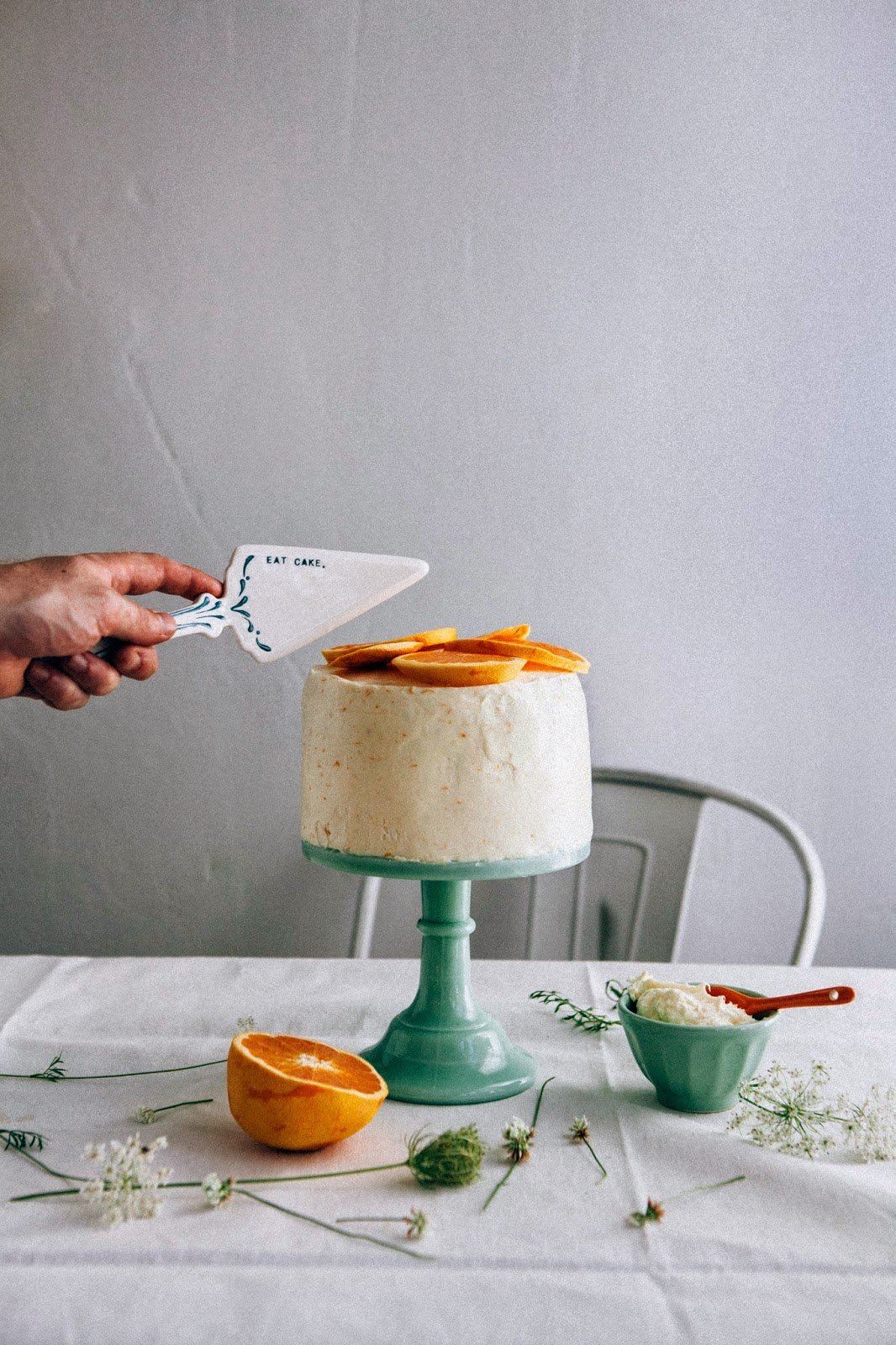 Throughout the last few years, I would try different red velvet recipes, throwing in some orange zest, extract or oil here and there in an effort to recreate that same cake. No recipe could ever quite capture that same flavor. It was only in a somewhat tipsy discussion with a baker friend with whom I was discussing the baked goods that we had failed to master (for me, those damn French macarons and this cake), that she suggested I ditch the red velvet base all together and try messing with a chocolate one instead. Because the best red velvet recipe she’d tried, for instance, contained an extra cup of hot coffee to add depth to its faint cocoa flavor. 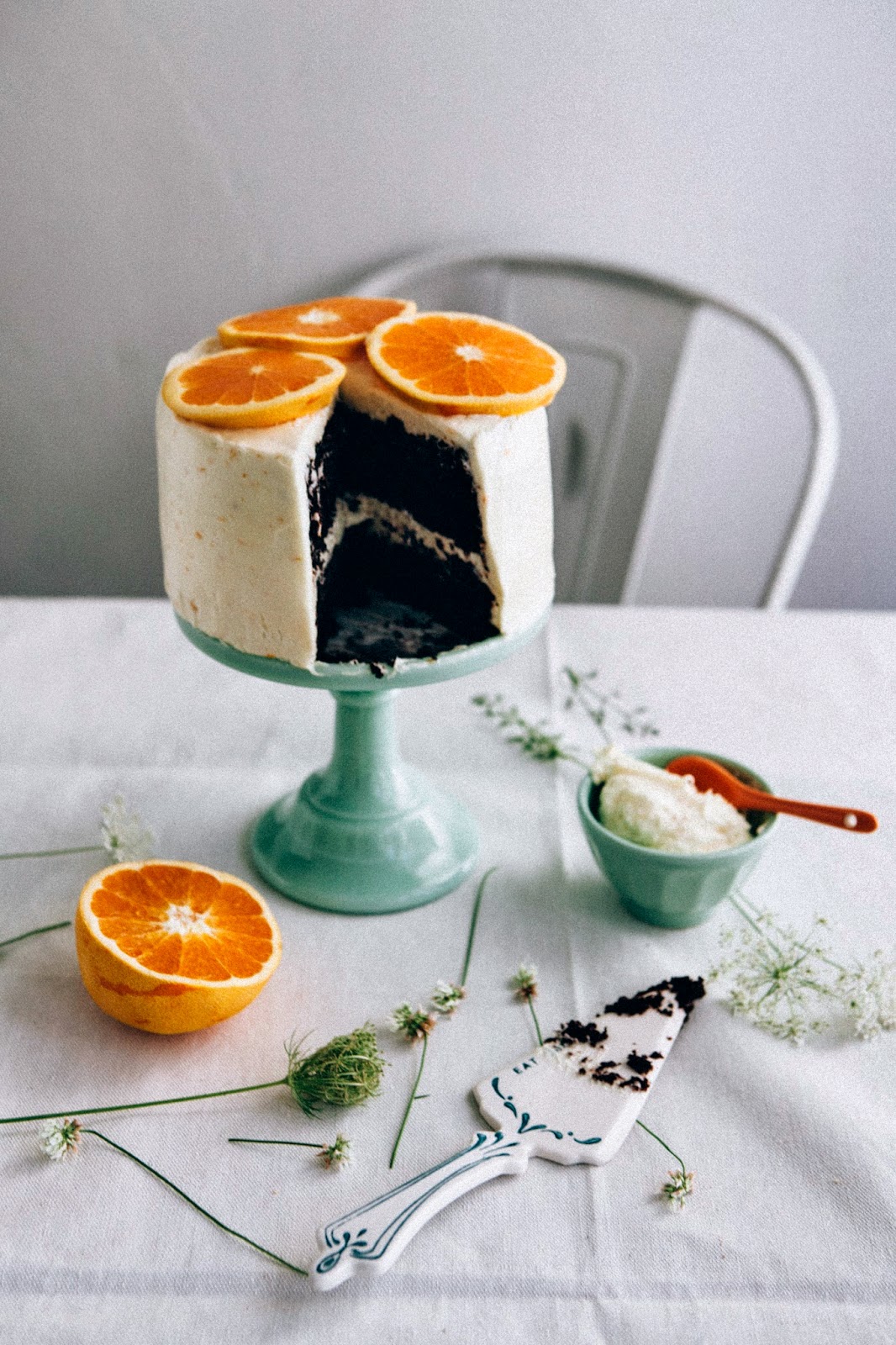 Well, as you probably figured out from the blog title’s post and the picture above, it didn’t really work. In my first attempt, I kept it simple and just added a couple tablespoons of food coloring and orange zest to the chocolate cake recipe. No surprises here — the amount of cocoa powder overpowered the food coloring, leaving me with a standard looking chocolate cake.

As for the flavor itself, the cake tasted like… well, chocolate cake, with a hint of orange. I was partially right about the vinegar and baking soda giving red velvet it’s unique flavor, which this cake was missing because it used baking powder instead. But the flavor of this cake wasn’t bad at all — in fact, it was tasty enough for me to forget my original intent, scarf down a slice or two and think about what could be improved for the next run. While the fresh orange zest imparted a lot of flavor, it definitely needed a touch more. I made a note to swap out the recipe’s vanilla extract with an orange liqueur like Grand Marnier. And as for frosting, it needed to be tangy, but salty to really make the chocolate and citrus flavors sing; cream cheese would be the best base for that. 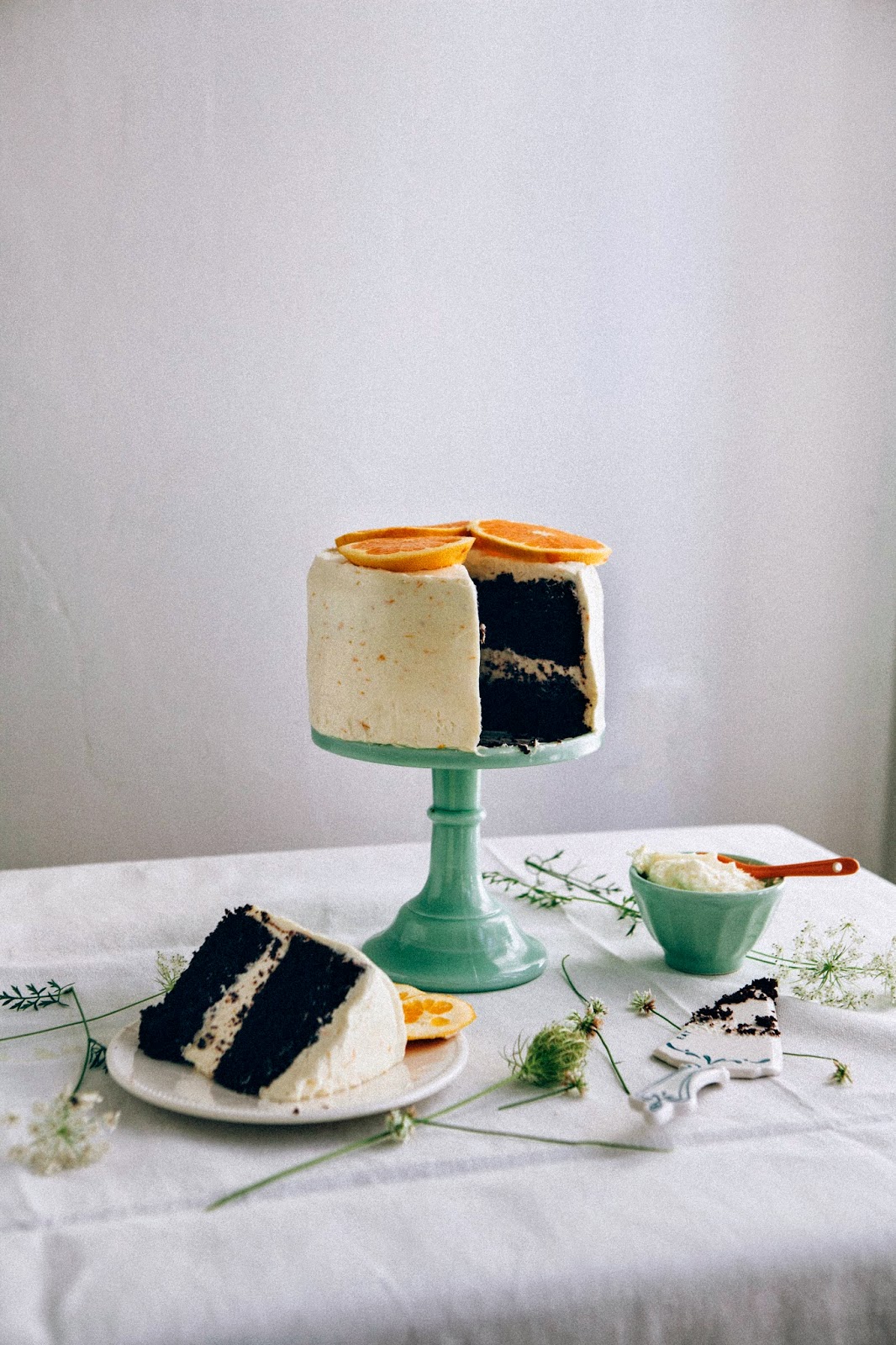 So behold, this cake — it’s definitely not the red velvet I initially set out to make, but it’s a cake that shouldn’t be swept aside anyway. Chocolate and orange is one of my favorite combinations, and when topped with this salted orange zest cream cheese frosting? It’s a recipe that deserves to be blogged about as it is its own star.

Until next time, red velvet. I’ll be back for you. But for now, this chocolate orange cake will do just fine. 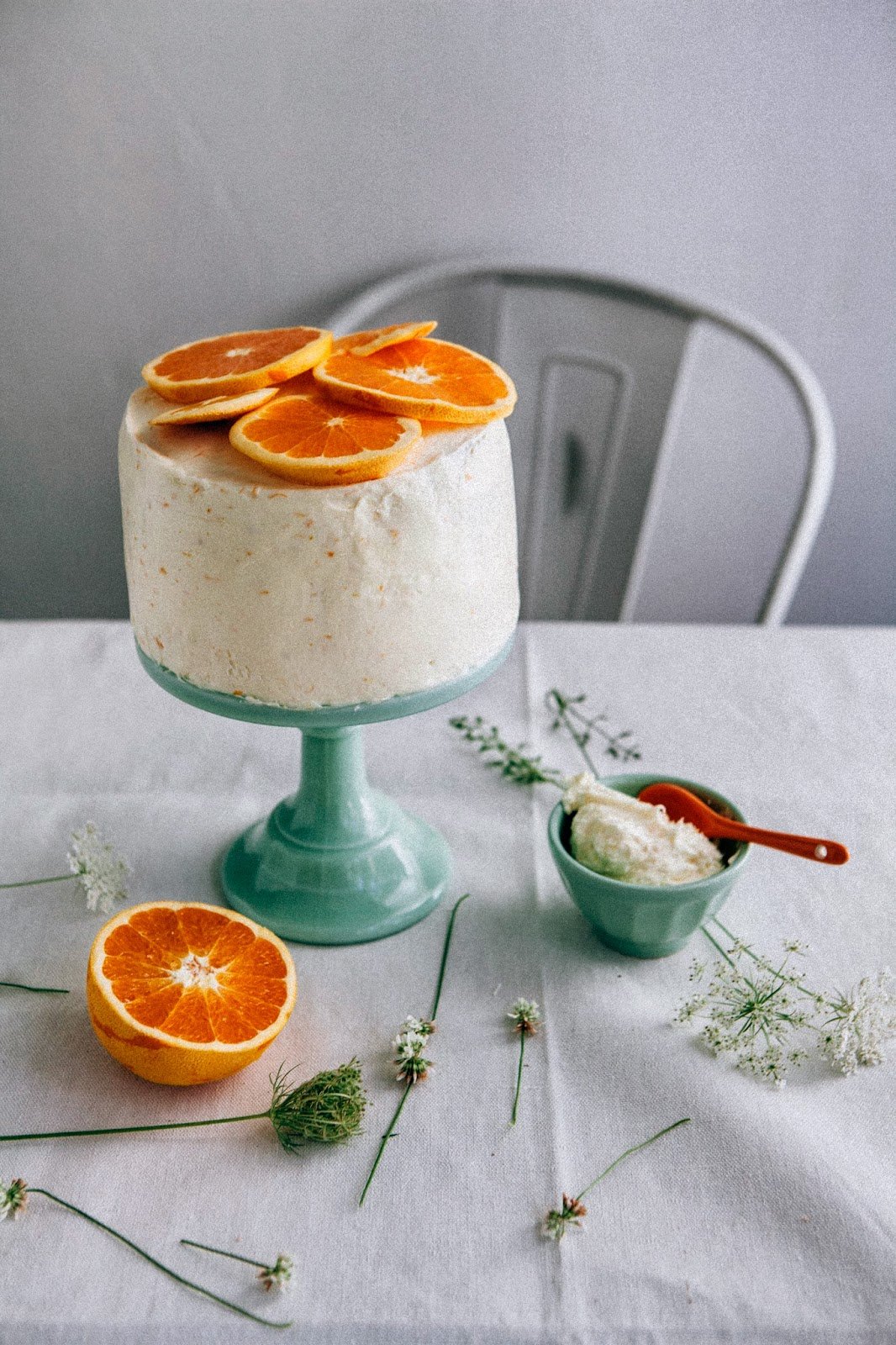 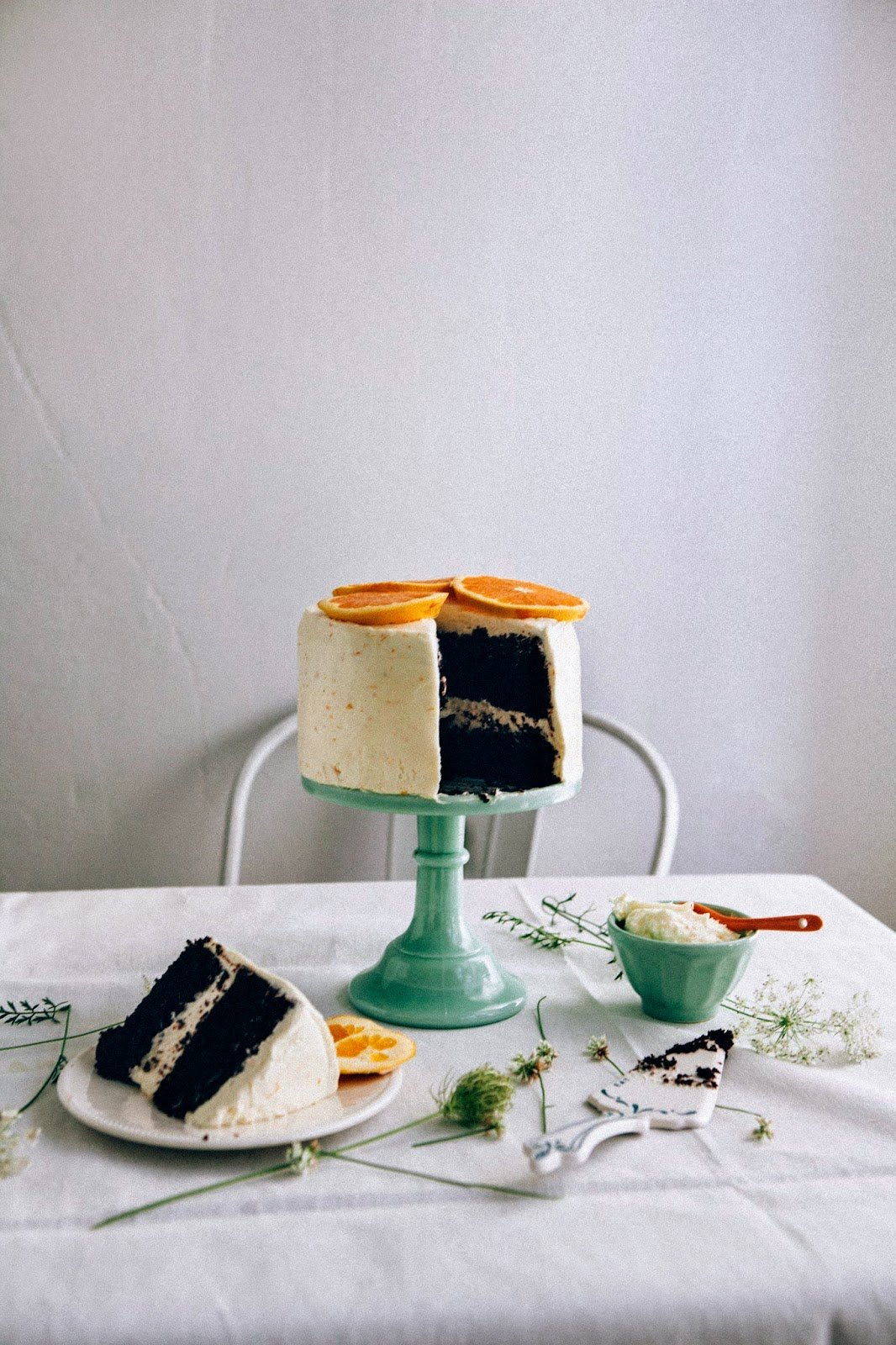 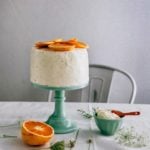 For the Chocolate Orange Cake

For the Salted Cream Cheese Frosting

For the Chocolate Orange Cake

For the Salted Cream Cheese Frosting

Cake is adapted from The Vanilla Bean Blog, frosting inspired by Lady and Pups