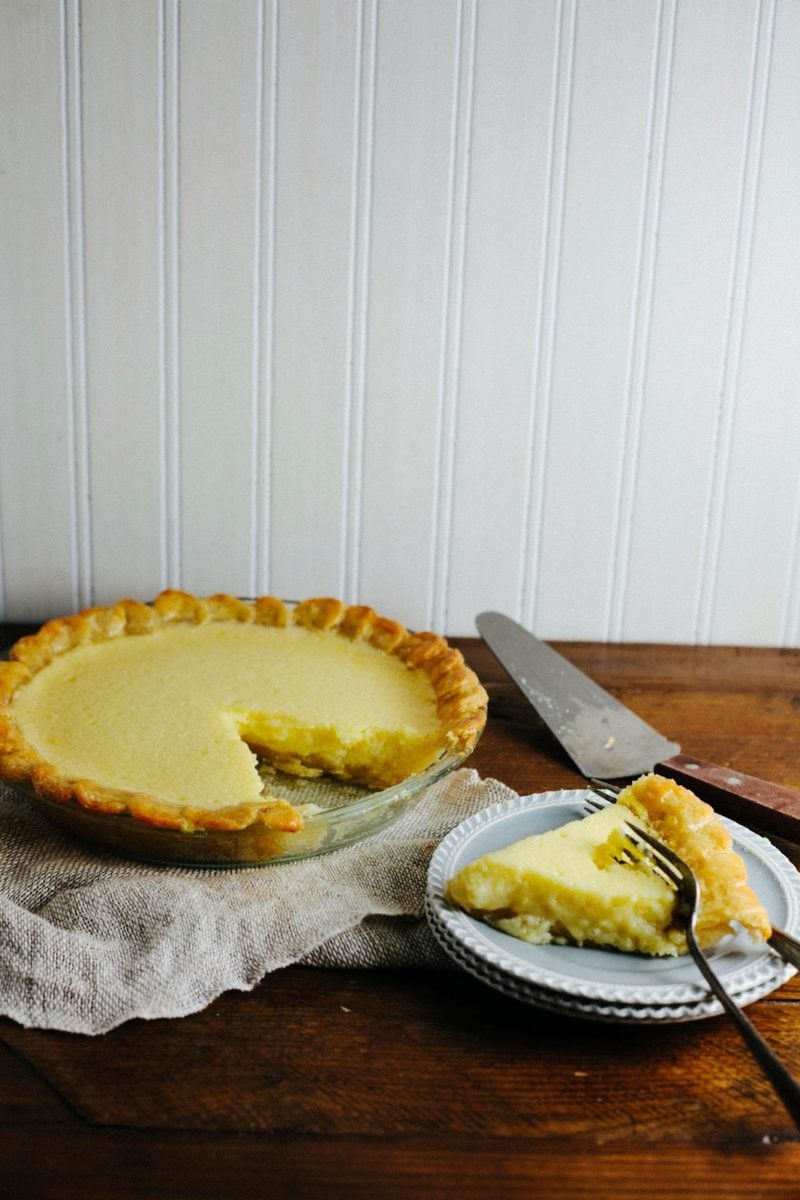 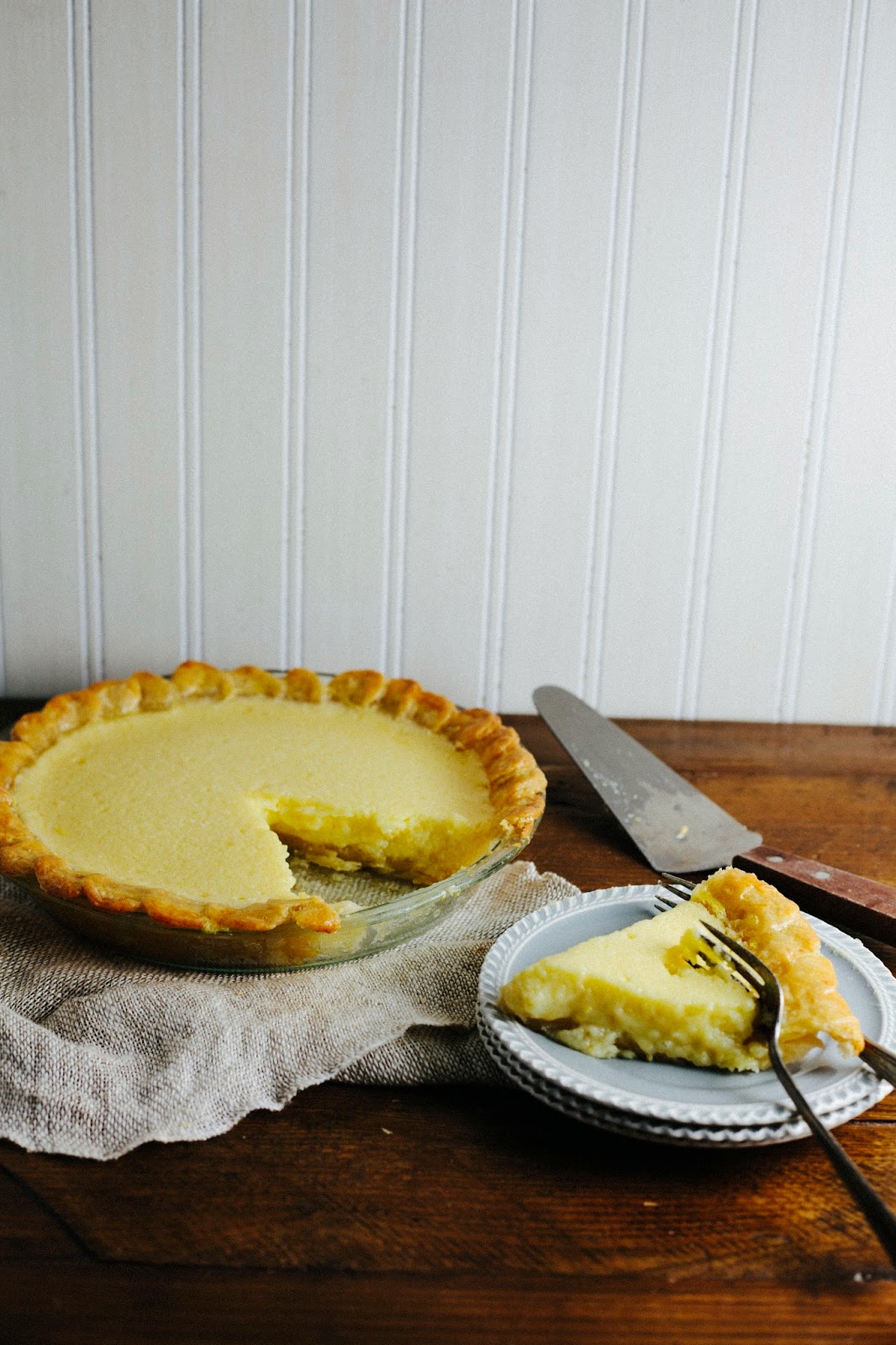 So naturally, I had placed the pie shop at the top of my list of things to visit while I was in New York for Christmas. In fact, I had talked up Four & Twenty Blackbirds so much that even my boyfriend’s parents were interested in tagging along and trying out some pie with us! This is a big deal — Erlend’s dad doesn’t have much of a sweet tooth, yet he was still won over by the idea of their pies. The four of us sat down and pored through Four & Twenty Blackbird’s winter pie menu, strategizing who was going to get what. We debated and fought over flavors like Salted Caramel Apple, Grapefruit Custard, and Lemon Chess for a good 15 minutes.

So off the four of us went, taking the subway from their apartment in Morningside Heights all the way to Four & Twenty Blackbirds’ location in Gowanus, Brooklyn. I’ll admit that I’m not the most familiar with Brooklyn — although I have good friends that have resided/currently reside there, they’ve all tended to cluster in hip neighborhoods like Williamsburg or Bushwick. I assumed that Gowanus would be the same since the only landmarks I knew to be in the area were this pie shop and a terrarium store. But more on that later.

After a 45 minute+ ride that involved many chaotic transfers, we were dumped out in the middle of a very derelict looking neighborhood consisting of wide avenues lined up with boarded-up shops. Ah, so this was Gowanus. No matter! We waved it off. It’s Brooklyn. Part of the charm, ya know? We passed a canal that was filled with murky water with a layer of colorful oily film and several empty beer cans floating up top. Only a few blocks now! We continued trekking past a gaggle of kids who were heckling at cars. Only a block away now! Ah! Here it is…

To our horror, Four & Twenty Blackbirds didn’t look any different from the sorry storefronts that we had just passed. It was empty and lifeless, with bars on the windows and a boarded up door. Did we miss something? Apparently we did — Erlend’s dad spotted a tiny sign explaining that Four & Twenty Blackbirds was taking a holiday break. A crucial fact they had neglected to announce on their website.

We subsequently spent the rest of the afternoon wandering around aimlessly, at a loss for something to do before our evening plans. The four of us were grumpy and disappointed that Four & Twenty Blackbirds had failed to deliver — what kind of business doesn’t announce its week-long closure on its website? I personally was heartbroken that I wouldn’t be able to try any of their pies for a long time, not unless I made it for myself…

Which is what I did here: 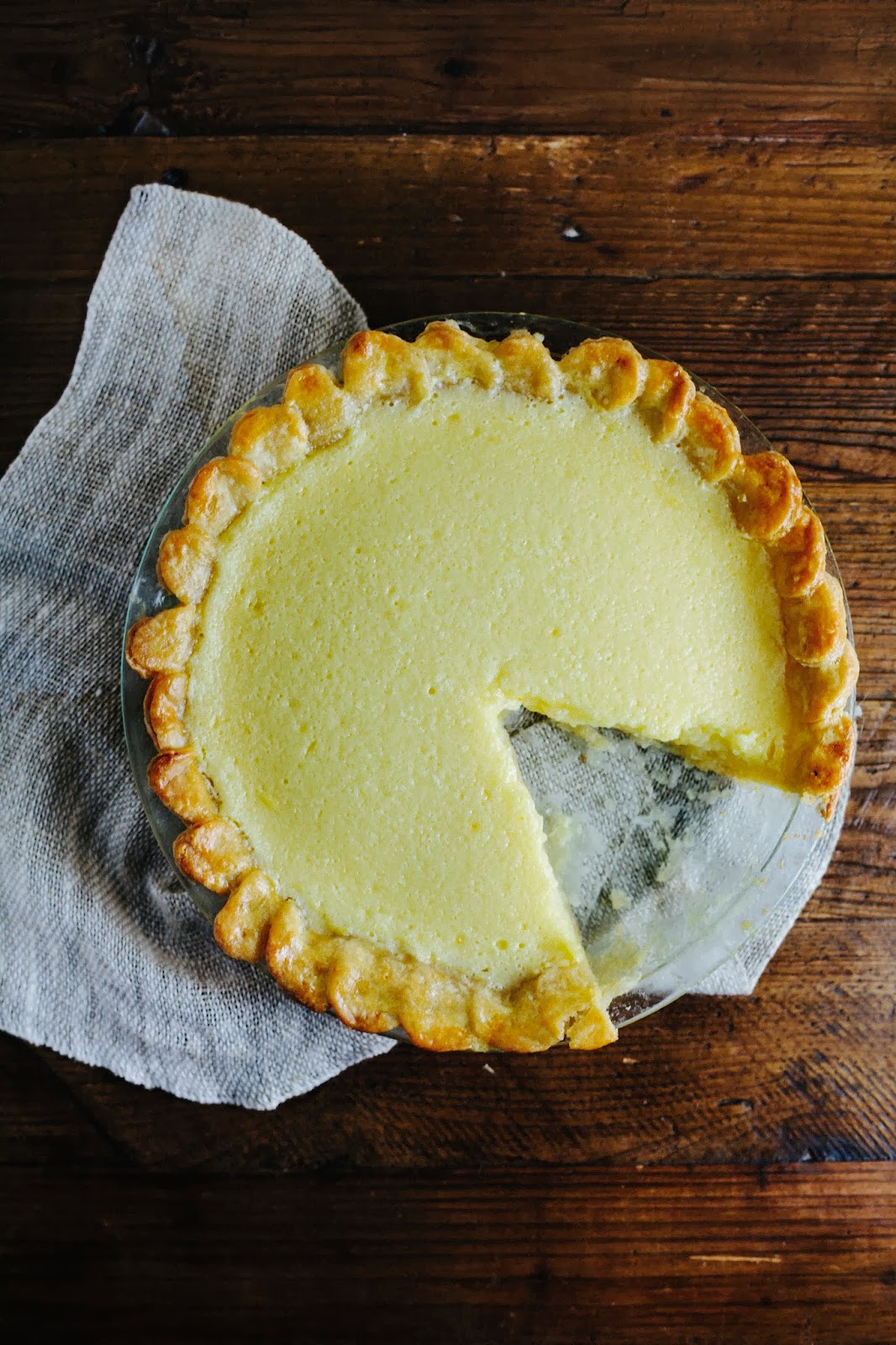 This pie is adapted from Four & Twenty Blackbirds’ recipe for Lemon Chess pie. What is chess pie? A pie filled with creamy custard. Sometimes flavored with fruit (like ours, in this case), but often times just plain old buttermilk or vanilla custard.

I’ve heard two different origin stories for the chess pie. According to Wikipedia, it was named for the pie chest that predated the modern refrigerator and was used for storing pies and other food. According to Christina Tosi, head pastry chef of Momofuku Milk Bar, chess pie is a spin off of the expression “just pie” — often used by the ladies of yesteryear to describe winter pies they would make that lacked fruit filling (“just pie”/”chess pie”… get it?) since nothing was in season. I’m sure the real story is somewhere between the two, but I like Christina’s a lot more so I’m sticking with hers.

For this pie, I substituted regular lemons with Meyer lemons, which I think gave the pie a slightly sweeter custard — truth be told, this tasted like a lemon bar in pie form! Its sweetness was offset by the apple cider vinegar in the pie crust recipe, which gives the pie crust a slightly tang along with a unique tender texture. As I’ve admitted several times on this blog, I’ve never been great with pie crust, so please forgive the uneven edges. I’m sure it would have been better at Four & Twenty Blackbirds… not that I’ll ever know.

Not bitter at all. 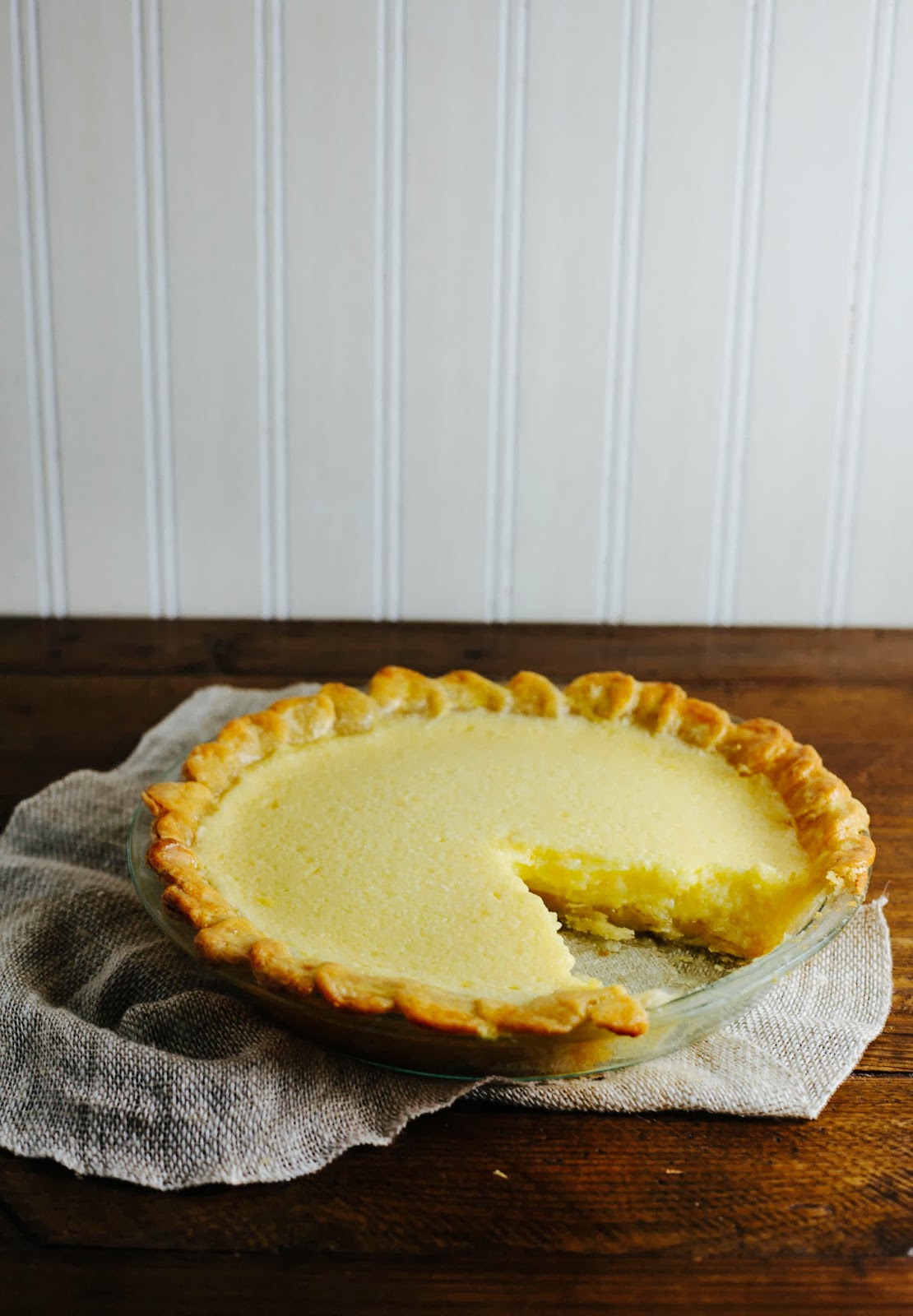 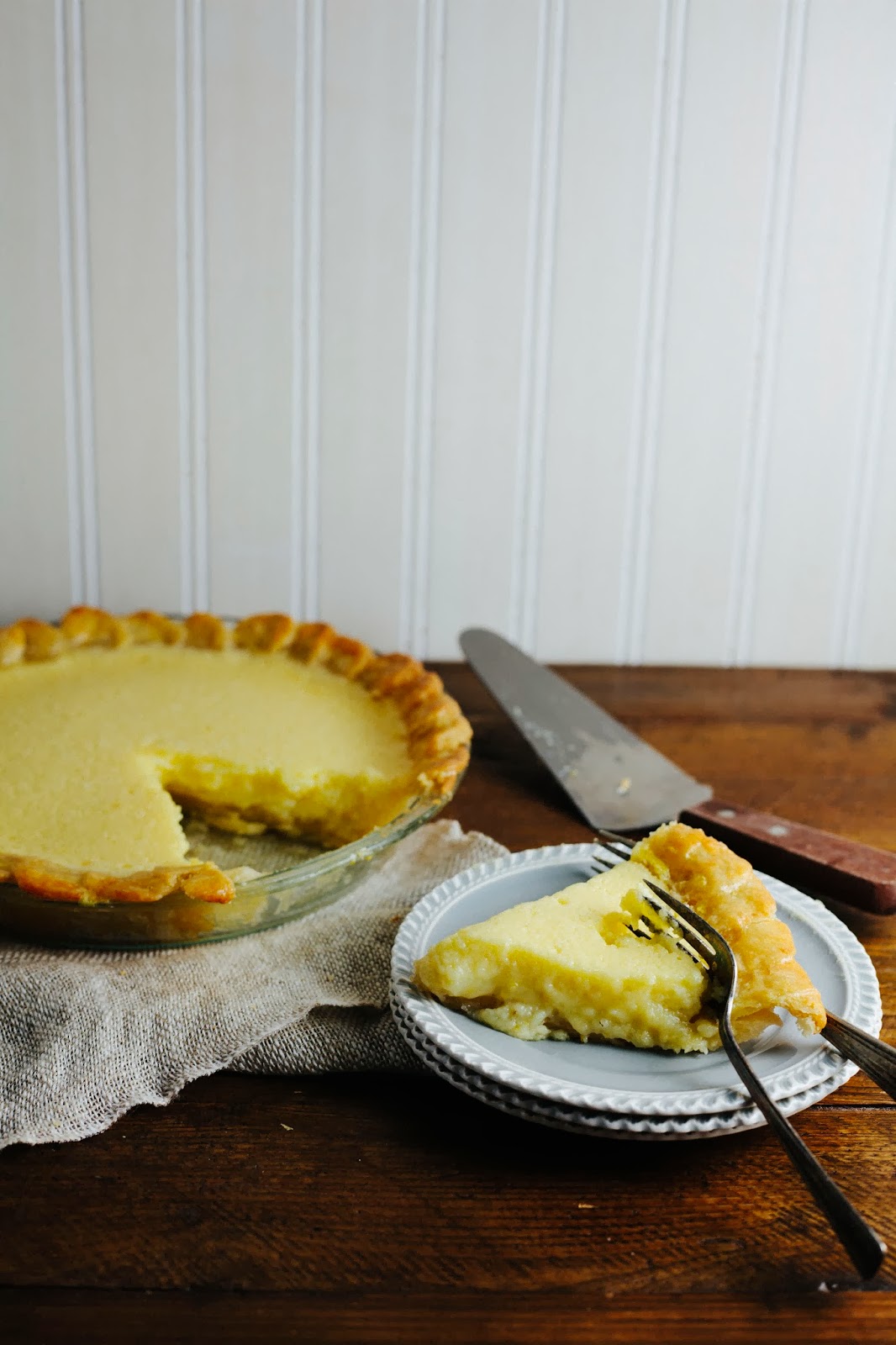 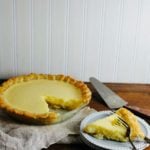 For the Meyer Lemon Custard Filling

To Blind Bake the Crust

For the Meyer Lemon Custard Filling