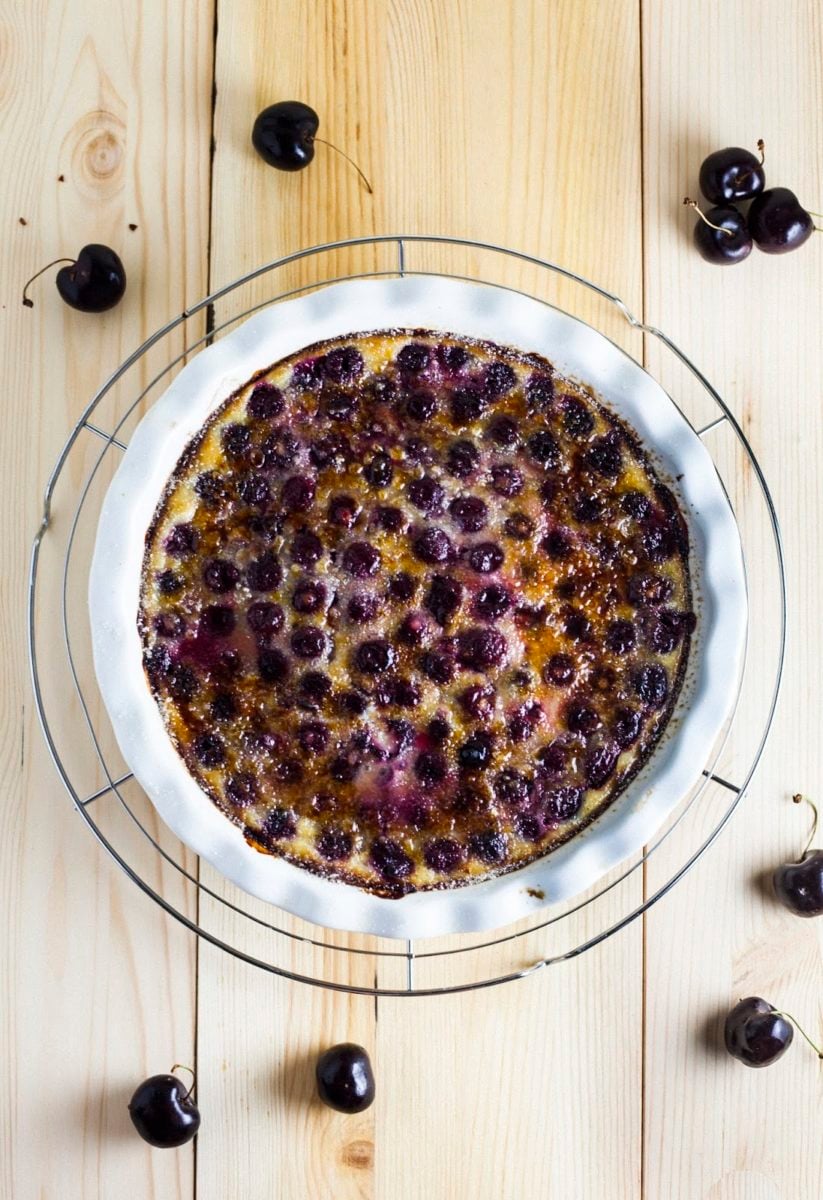 One day, Erlend came home with over 2 pounds of cherries from our neighborhood farmer’s market. “They were on sale — last of the season!” he had exclaimed when I looked at them skeptically. “Don’t worry, I’ll eat them all!” Sure enough, 2 days later and halfway through the bag, he pushed the rest […] 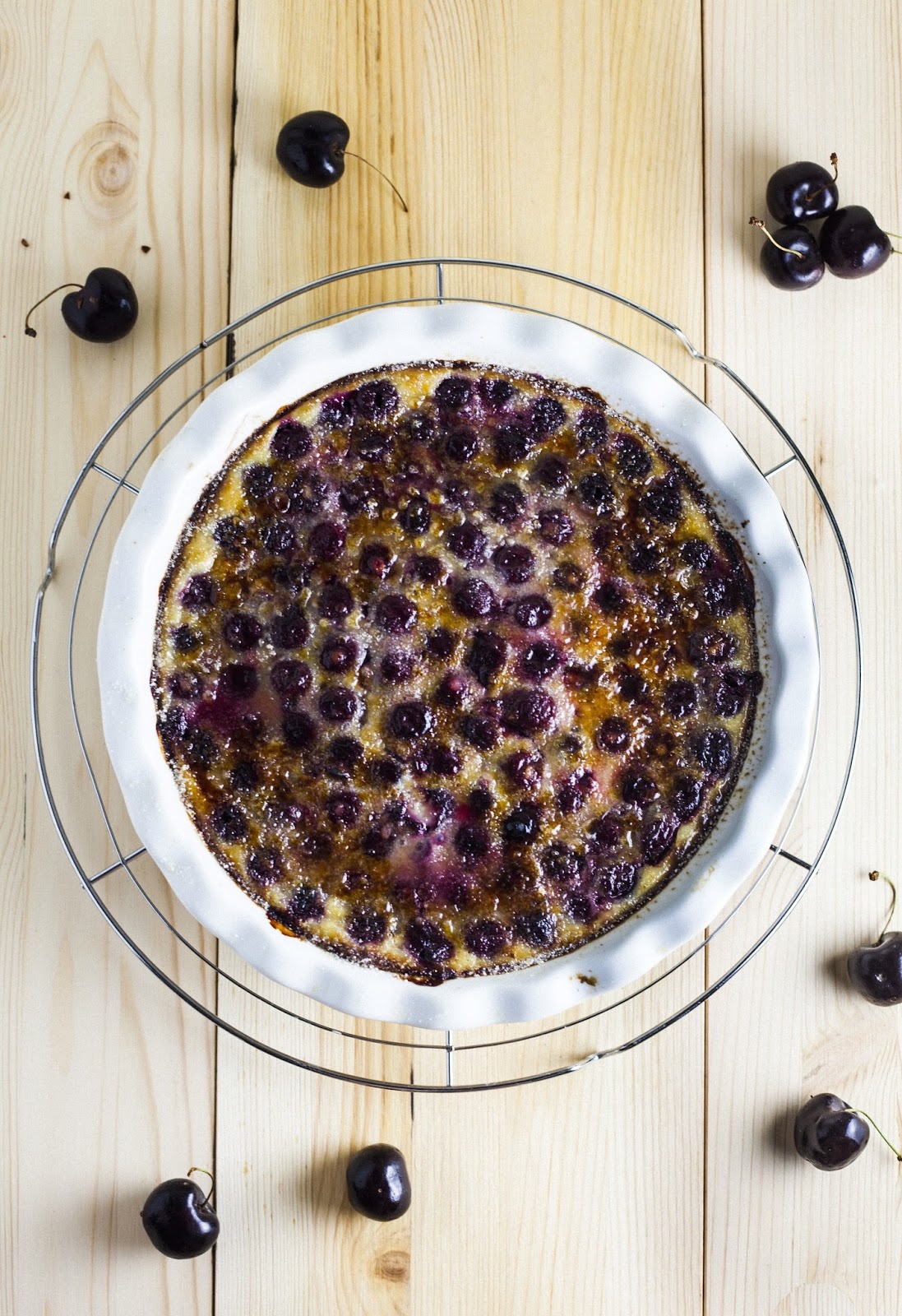 One day, Erlend came home with over 2 pounds of cherries from our neighborhood farmer’s market. “They were on sale — last of the season!” he had exclaimed when I looked at them skeptically. “Don’t worry, I’ll eat them all!” Sure enough, 2 days later and halfway through the bag, he pushed the rest of the cherries towards me. “I can’t stand them anymore. Use them for baking.”

Truth be told, I’ve never been the world’s biggest fan of cherries. I’ve hated maraschino cherries for as long as I can remember, and although I like the taste of regular cherries, I find them to be too much work — that is, too much pit and too little fruit, especially when it came to using them in baked goods. Only less than a week ago, my friend Noah and I had made a cherry pie, half of which we spent taking turns with a cherry pitter to stamp out the pits one by one.

Although I wasn’t thrilled about Erlend’s leftover cherries, I knew I couldn’t let the beautiful fruits go to waste: 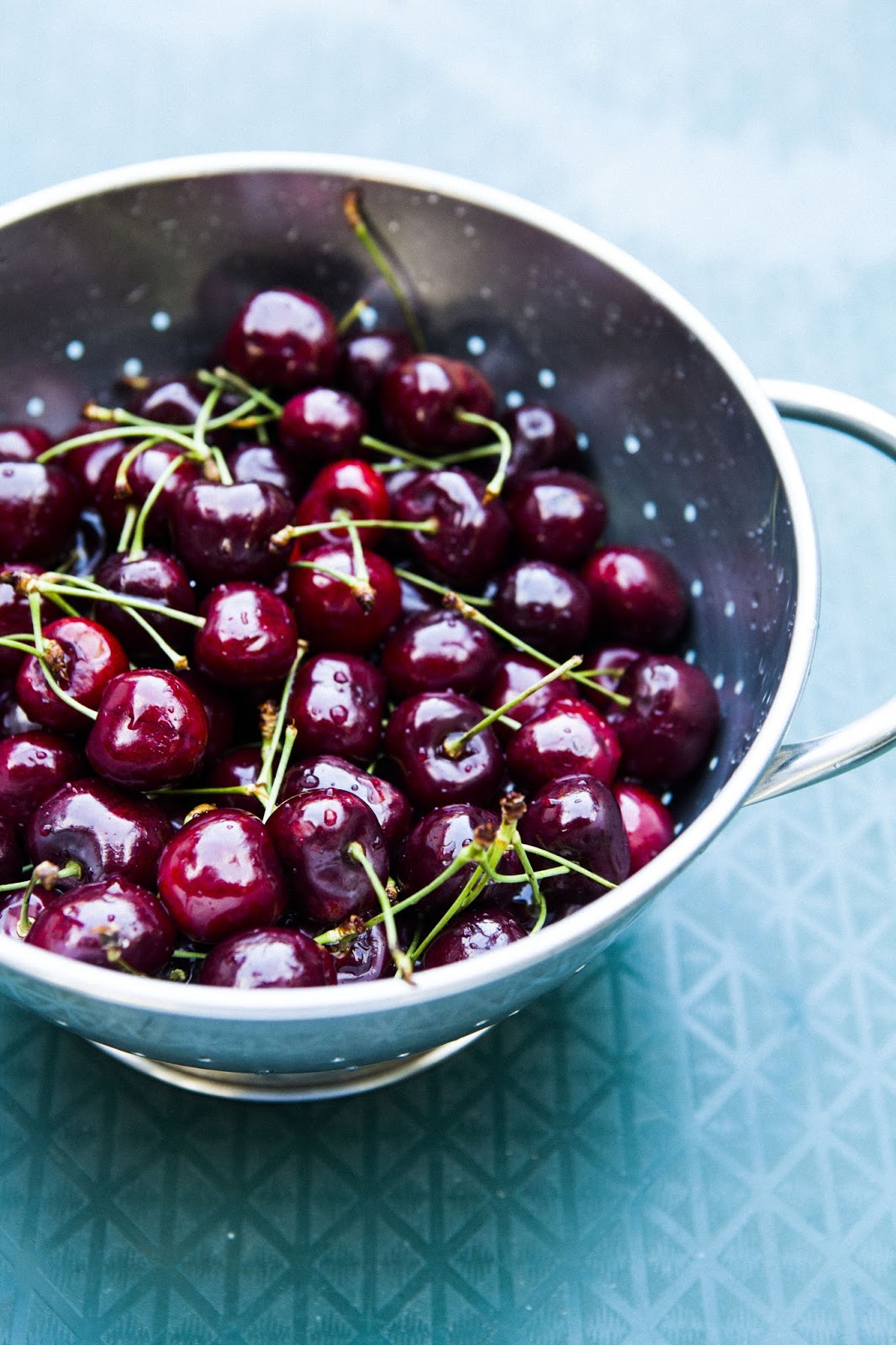 And when I started researching recipes that used cherries as their primary star, all search results sent me to clafoutis recipes.

Isn’t clafoutis a funny word? It’s one of those desserts that I’d always heard of, but had no idea what it actually was (or how to pronounce it — CLAH-foo-tee, apparently) until I started researching cherry recipes. It turns out that a clafoutis is a French baked custard, traditionally made with unpitted cherries. The cherries float to the top of the clafoutis’s light, liqudy batter, which then transforms into a flan-like custard during the baking process. Traditionally served warm from the oven, it made me realize what a shame it was that cherries weren’t ripe in the winter — it was wonderfully rustic and satisfying dessert, perfect for rainy days and cold nights.

Traditional clafoutis recipes use unpitted black cherries, with the theory being that the pits in the cherries give the custard a faintly almond flavor. I didn’t want my clafoutis’s custard texture to be ruined by cherry pits, so I went ahead and pitted the cherries anyway. I also used sour pie cherries, because these were the cherries that I had on hand. Despite not having a truly authentic clafoutis, the sour cherries were inadvertently a great choice as the fruit’s tart flavor and acidity was the perfect balance to the custard’s sweetness. And finally, the last liberty I took was using my chef’s torch to create a sugar brûlée layer on top of the clafoutis, resulting in a dessert that tasted like a giant, fresh baked crème brûlée — with cherries on top.

Mmm. This is definitely a dessert I’ll be making again next time cherry season rolls around. 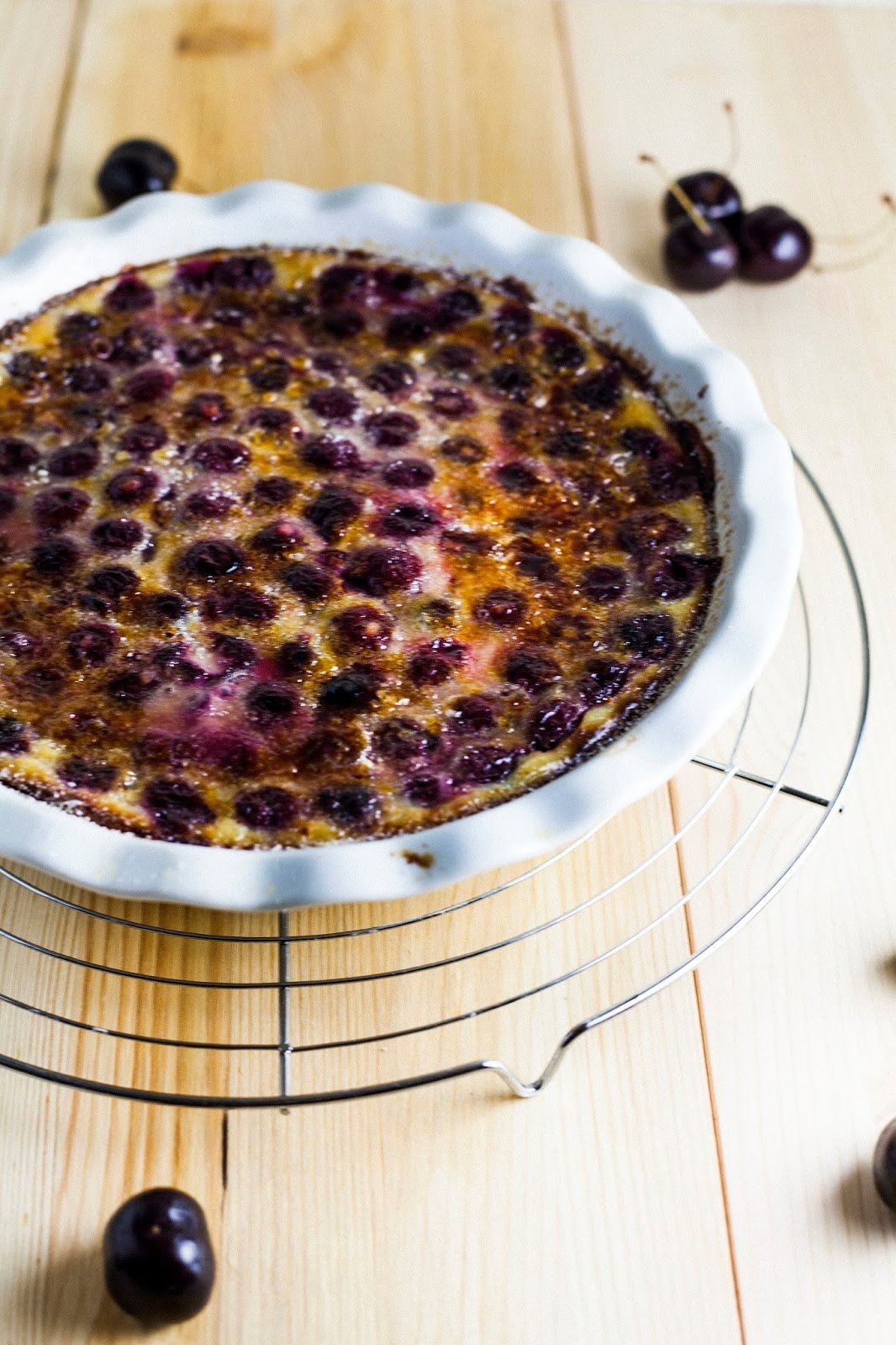 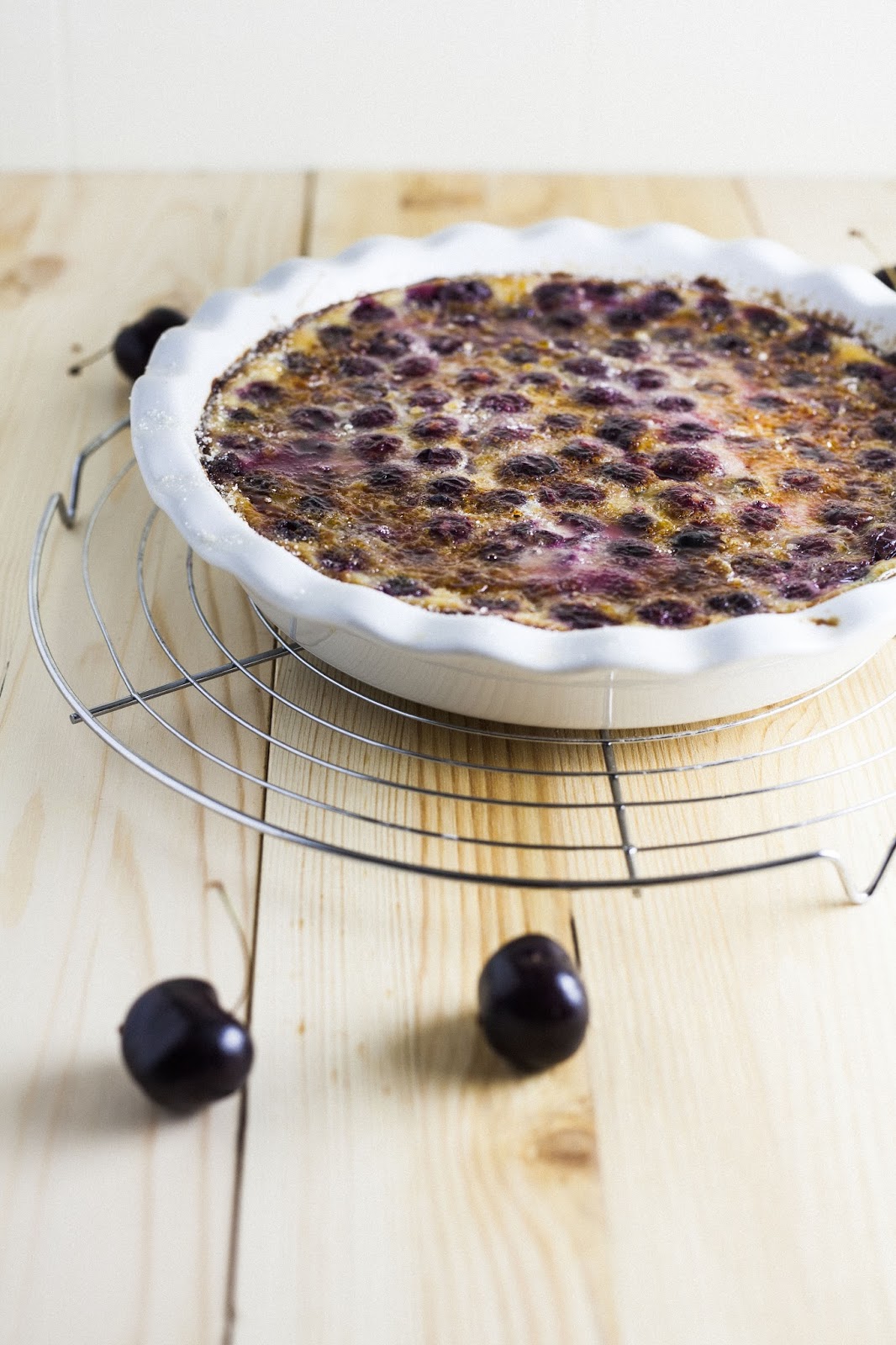 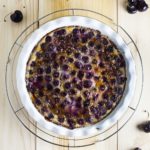