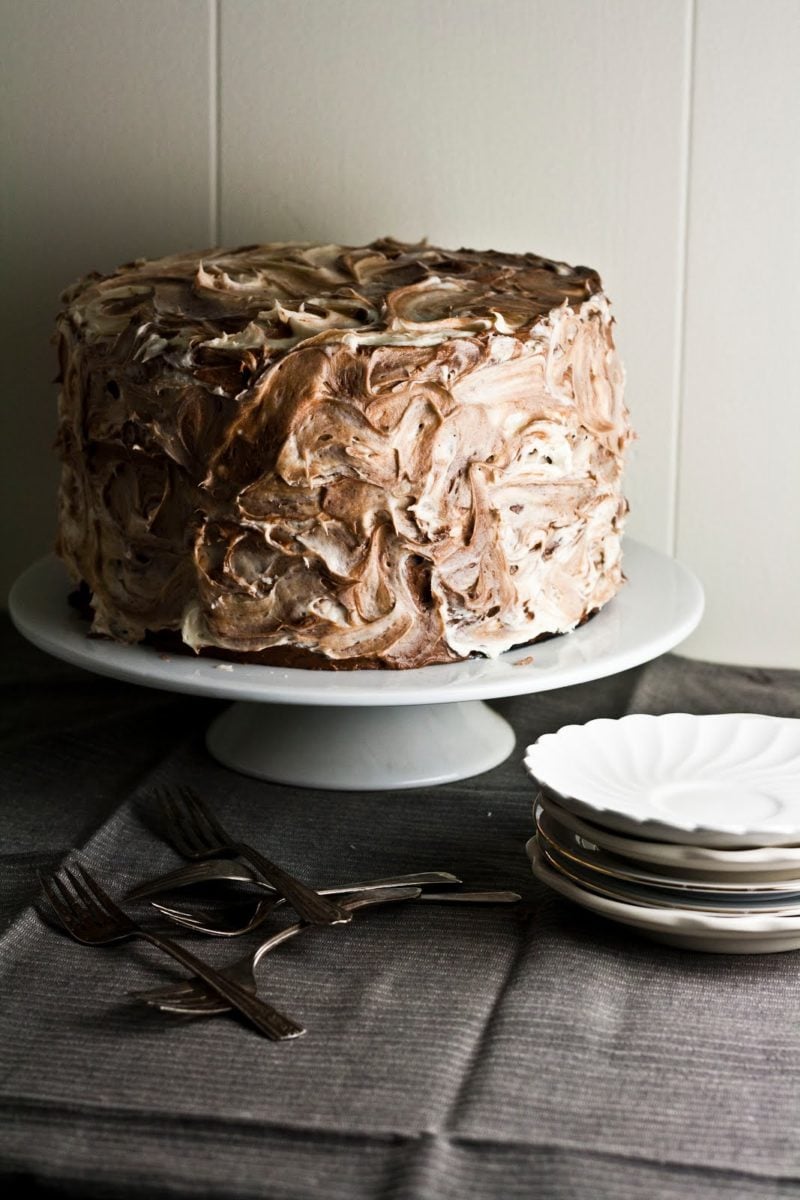 Yep, while everybody else is on a diet, I’m just sitting here baking three-layer cakes. This is my third layer-cake of the year, and it’s only been three weeks into the new year. Yerp.   There’s several reasons why I’m starting the year baking a crap-ton of cakes. The first is that as I […] 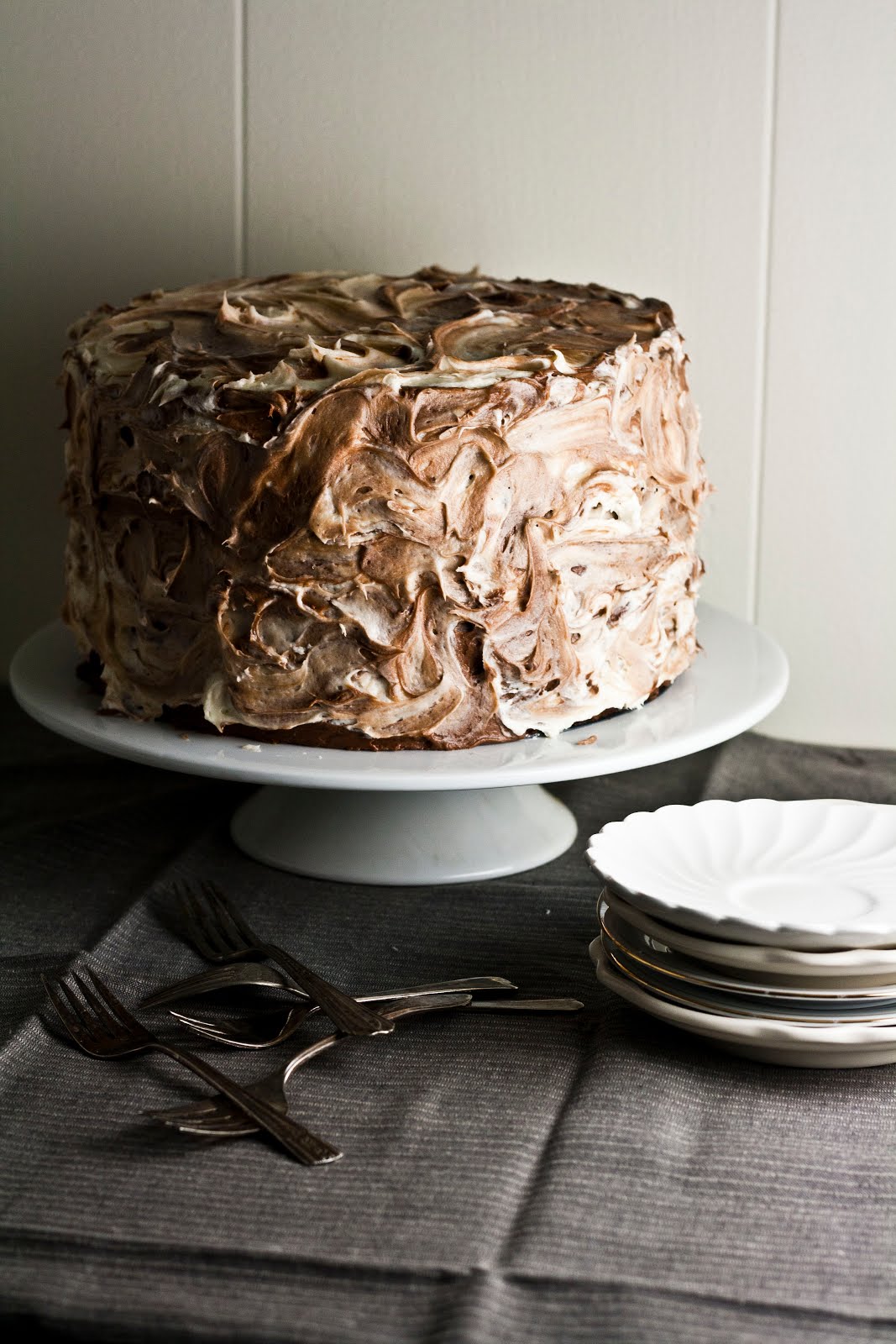 Yep, while everybody else is on a diet, I’m just sitting here baking three-layer cakes. This is my third layer-cake of the year, and it’s only been three weeks into the new year. Yerp.
There’s several reasons why I’m starting the year baking a crap-ton of cakes. The first is that as I was writing my 2012 lookback, I realized that a lot of my weaker photos were that of cakes. Take my post for Kentucky Bourbon Butter Cake, for instance, or my recipe for Chocolate Banana Pocky Cake. Both delicious recipes that were underserved by my mediocre photos.
It’s surprising that cakes, something so appealing and delicious-looking in real life translates so poorly in photos. But I struggle when I take pictures of cakes — I can never make them look as delicious or beautiful as they do in real life. Part of it is my camera. I only have a 50mm fixed lens, meaning I have to physically walk backwards and forwards if I want to zoom in or out on my object. And since most of the cakes I bake are so big (especially three-layer ones from the Brown Betty Bakery), I can’t capture the whole thing on camera without walking all the way across the room. Which then affects my photo’s lighting, since the light source I use for photos tends to be near the food I’m taking pictures of.
But enough of this boring food photography talk. The other reason why I decided to bake a bunch of cakes is because I’m always getting requests for to bake cakes for events, and I don’t really have a good cookbook or recipe stock that I can pull from. So I figured that I could start out the year and kill two birds with one stone — figure out a good book for cake recipes by baking through the first one that appealed to me the most, which was the Brown Betty Bakery Cookbook.
This is my third recipe from the Brown Betty Bakery Cookbook, and it’s a recipe for marble pound cake: 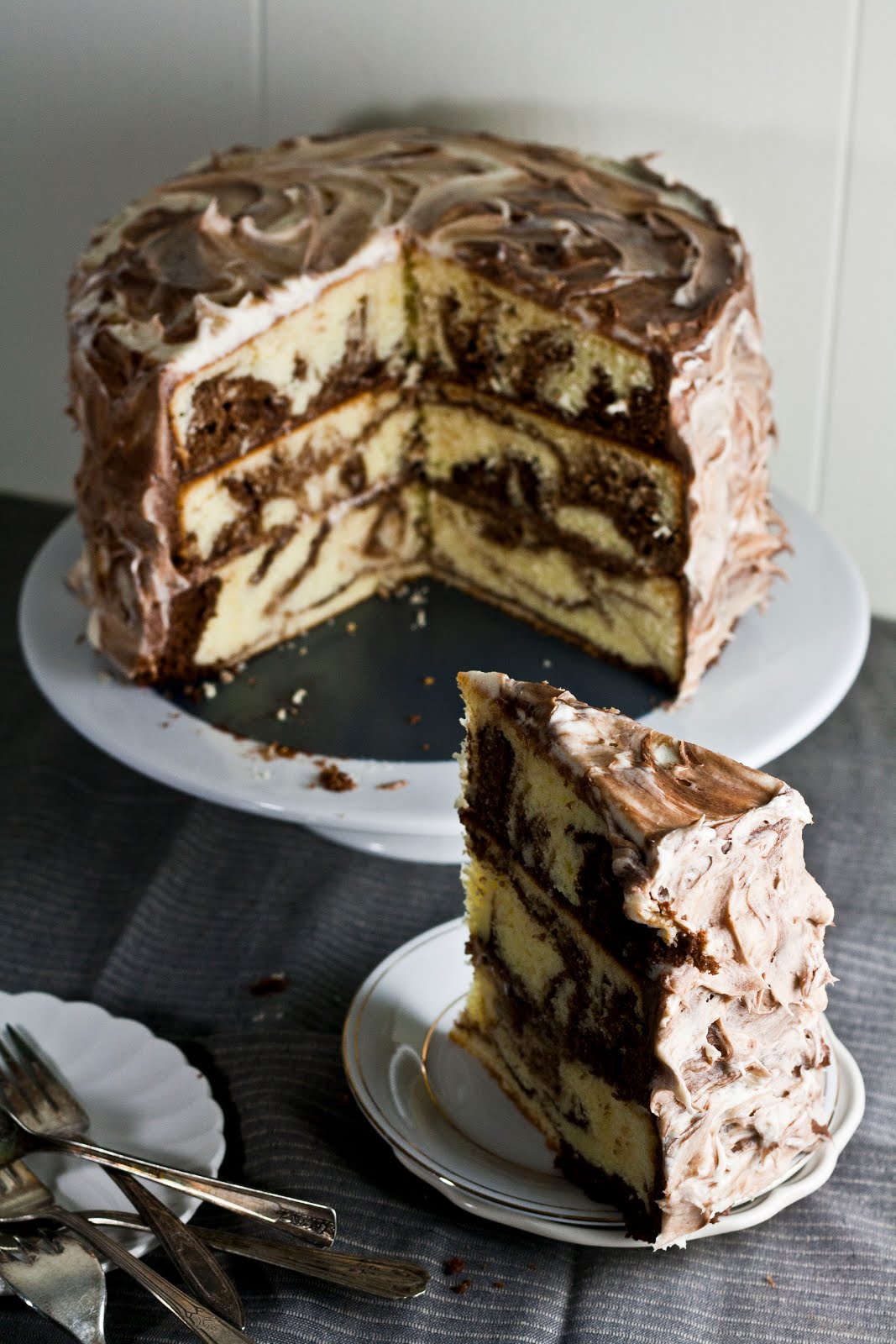 What’s marble pound cake? It’s a yellow pound cake swirled with chocolate pound cake, topped off with vanilla and chocolate buttercream frosting. Basically ideal for those who can’t decide between vanilla or chocolate, and want both.
This cake admittedly takes a bit of work, simply because it requires making two cake batters and then swirling them together. But the result is absolutely wonderful. The cake’s texture is dense (it is a pound cake after all), but incredibly soft and moist. The flavor is a delightful marriage between dark chocolate and vanilla- and rum- scented yellow cake. And don’t even get me started on this marble cake’s frosting: 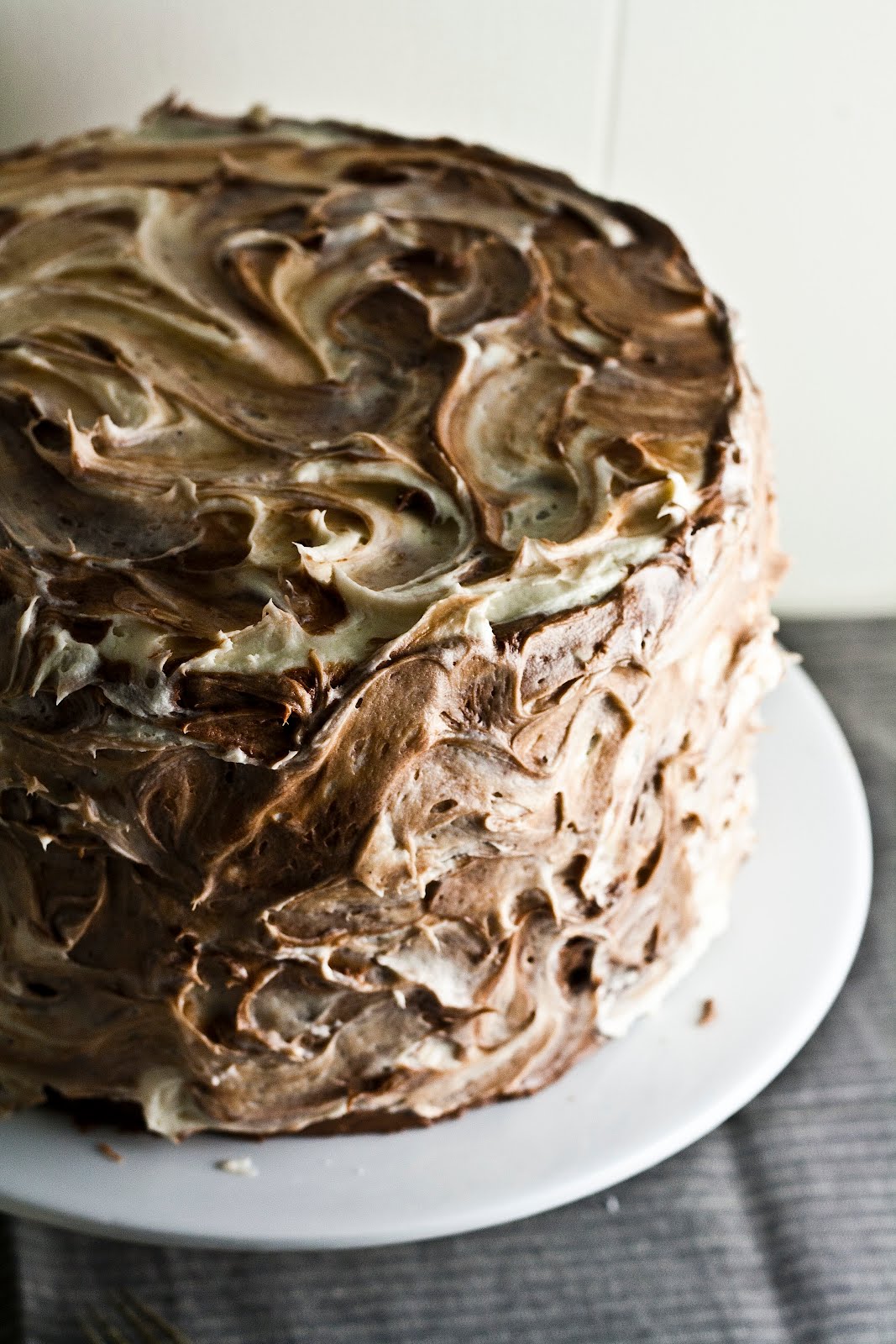 Beautiful, right?
The cake is topped off by alternating swirls of vanilla and chocolate buttercream, giving the cake the marbled and textured look that you see in the picture above. Mmm.
While I’m happy to declare this recipe as another winner from the Brown Betty Cookbook, so far, I have mixed feelings on the entire cookbook itself. The last three recipes on this blog — the chocolate buttercream cake, the strawberry cake, and this marble pound cake — are all from the Brown Betty Cookbook. All of them are fine, if not great. I mean,  the Brown Betty Bakery has some pretty mean frosting recipes — including the best chocolate frosting recipe I’ve ever tasted.
What I dislike about the cookbook is that each cake is such a production. Flipping through the cookbook, it seems like each recipe requires such large quantities of each ingredient: at least 8 eggs, 4 sticks of butter, and so on. This recipe alone called for 12 eggs! Eek.
I also can’t seem to figure out their “mother recipe”; that is, the standard formula and ingredient ratios behind their cake recipes. Why is that important? The Hummingbird Bakery Cookbook, the only other cookbook I’ve baked through, had recipes that were basically a variation of their vanilla or chocolate cupcake recipe. This was incredibly helpful in that it was able to teach me how I could change a recipe, and eventually come up with my own original ideas and flavor combinations. But it seems like the Brown Betty Cookbook is more variable and changes their recipes significantly each time for each cake. And while this definitely lends itself to interesting and delicious results each time, it’s not exactly conducive to teaching myself how to bake and derive my own original recipes for cakes. Oh well. Not exactly a loss, but time to move on to the next cookbook on my bookshelf. Miette, perhaps? Or Bouchon Bakery? Anybody have any recommendations for me? 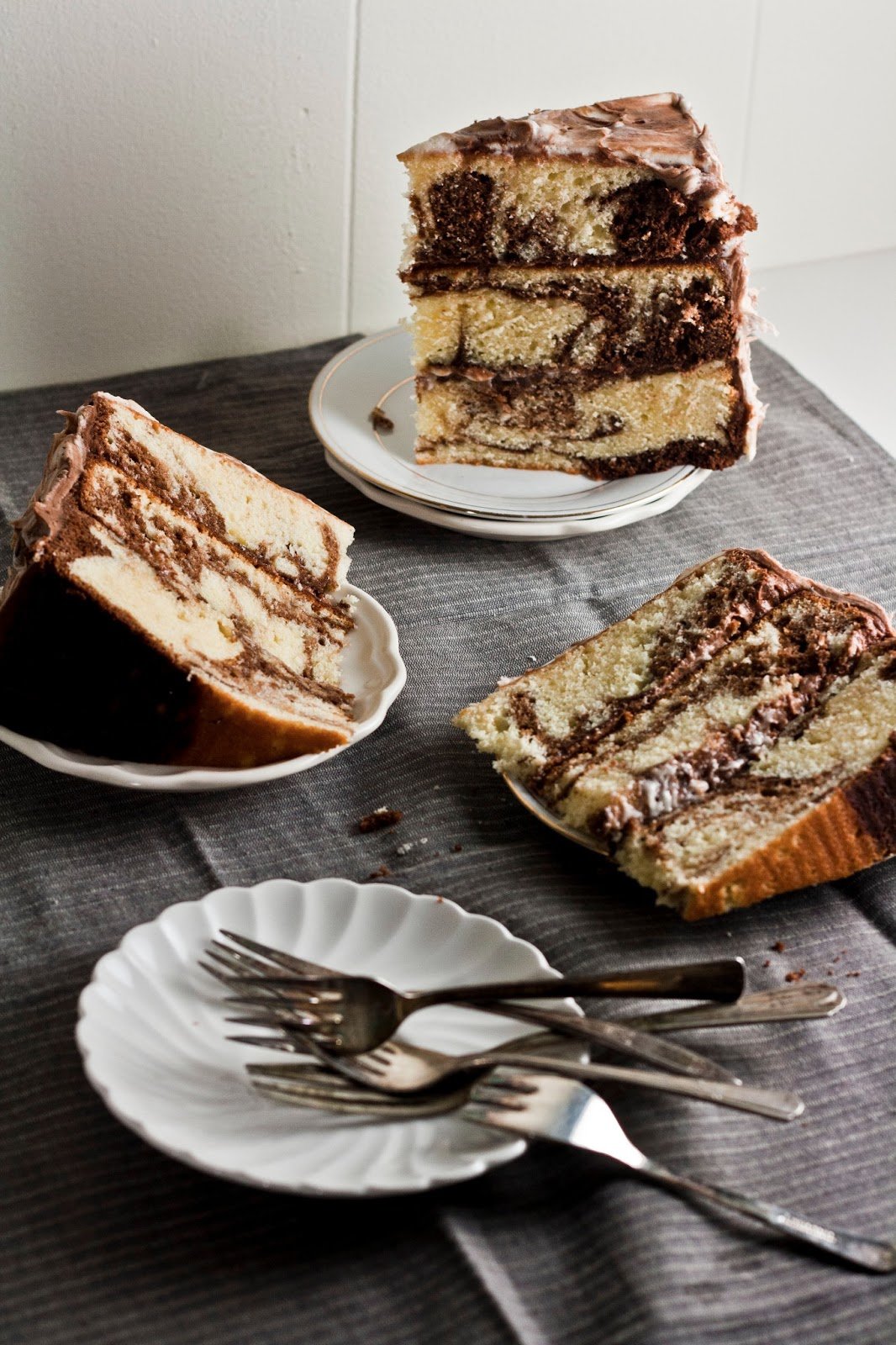 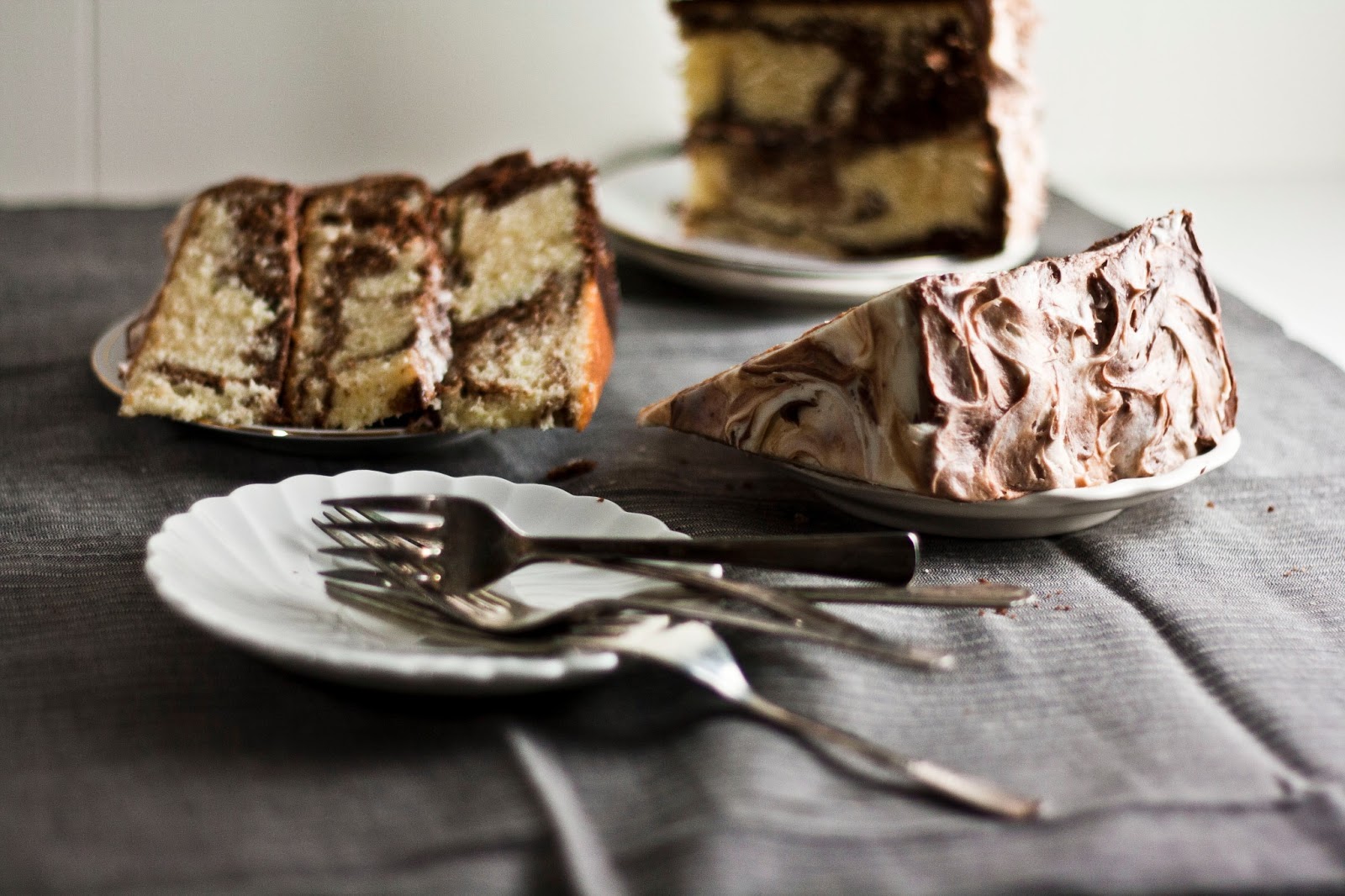 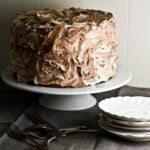 For the Vanilla Pound Cake

For the Chocolate Pound Cake

For the Vanilla Buttercream Frosting

For the Chocolate Buttercream Frosting

For the Vanilla Pound Cake

For the Chocolate Pound Cake

Putting the Cake Together

For the Vanilla Buttercream Frosting

For the Chocolate Buttercream Frosting