So, this is what Hummingbird Black Bottom Cupcakes are supposed to look like: 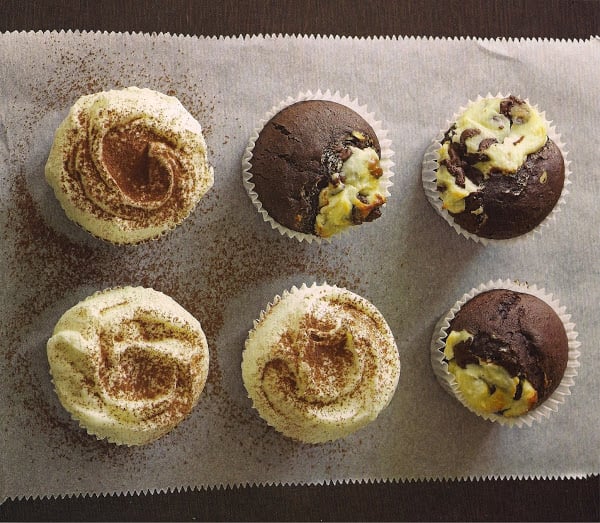 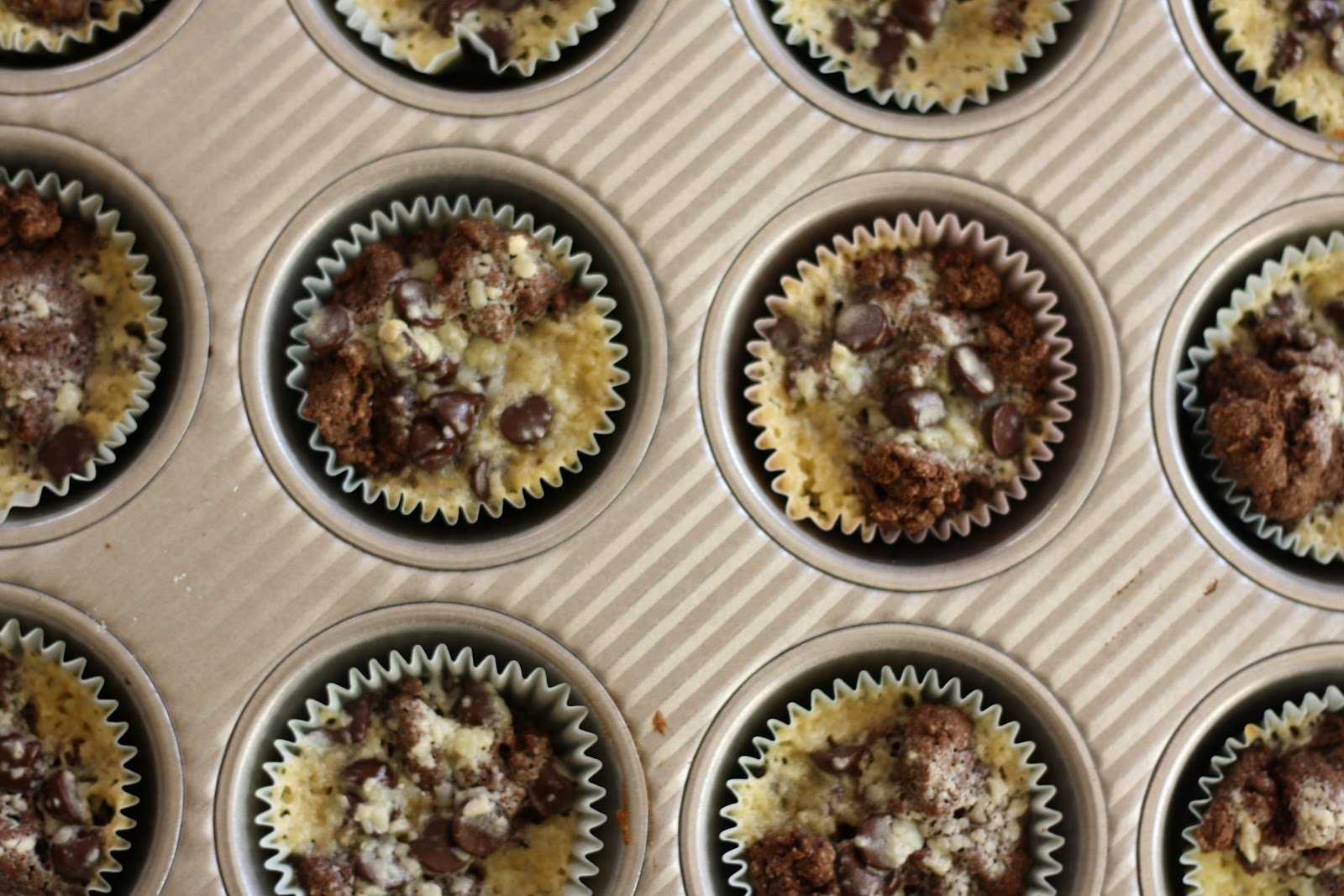 Ugh.
Guys, there were so many things that went wrong during this recipe that I don’t even know where to begin.

Admittedly, there were a few fatal flaws: the first one being, well… I got cocky. After my initial look at the recipe’s ingredients list, I noticed that the recipe used baking soda instead of baking powder. I figured that since Hummingbird Bakery Red Velvet cupcakes, the only other cupcake that used baking soda as a leavening agent, worked perfectly fine at high-altitude without any alterations, these Black Bottom cupcakes would follow suit.

But they didn’t! In fact, if you look at the uncooked batter below, I’m not even sure if the use of baking soda versus baking powder or possible high-altitude alterations is relevant to talk about at this point. Because right off the bat, you could see something was terribly amiss: 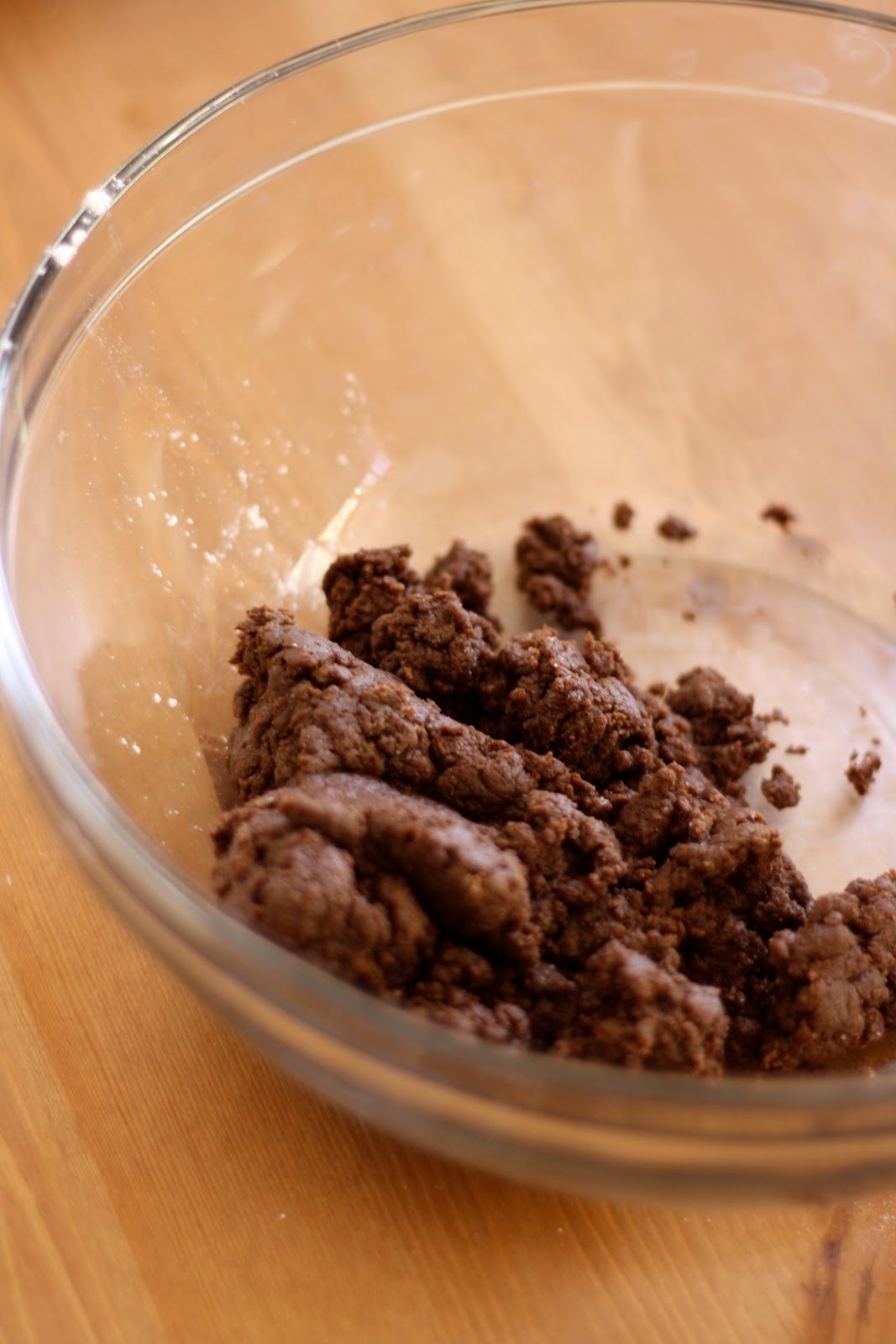 According to the Hummingbird Bakery’s official blog, the mixture for Black Bottoms is supposed to be thick and resemble uncooked brownie mix. In fact, I did a quick google image and found this image of what the batter is supposed to look like from another baking blog: 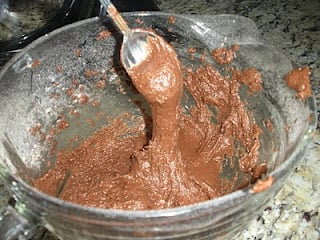 But as you can see above, my batter was CLUMPY.

It was almost as if there wasn’t enough liquid in the batter! The recipe instructed me to add 1/4 cup sunflower oil, 1 1/2 teaspoons vinegar, and a 1/2 cup of water to 1 1/2 cups flour, 1/2 cup plus 1 tablespoon sugar, 1/3 cup of cocoa powder, and 1/2 teaspoon baking soda. In sum, that would be the addition of approximately 3/4 cups worth of liquid to approximately 2 1/3 cups worth of solid ingredients.

I’ve been reading Michael Ruhlman’s Ratio, which details essential ratios that differentiate various doughs from one another. For instance, he argues that since most pastries and breads are made from the same ingredients; its only their ratio of ingredients that differentiates the final products from one another. For instance, a bread dough consists of five parts flour, three parts water, while a biscuit dough consists of three parts flour, one part fat, and two parts liquid. In detailing these ratios, he provides the framework for home cooks and bakers to start experimenting with recipes and their final outcomes.

Ruhlman doesn’t have a ratio for cupcakes, but he does have various ratios for different cakes: Angel Food cake, sponge cake, and pound cake. The Hummingbird Bakery describes their cupcakes as “sponges”, so I thought it would be best to start there. The ratio for sponge cakes is apparently:

1 part egg : 1 part sugar : 1 part flour : 1 part butter
Well, considering that the batter for Black Bottom cupcakes contains neither butter nor egg, I’m not sure it qualifies as a sponge. There goes that theory.

However, I’m not sure if it was a problem of ratios or if it was just… well… me. In my haste to cook up a batch of cupcakes before Sophie and Tim’s wedding, I kinda sped through the recipe and didn’t pay close attention to it — a big fatal flaw. Because in my haste, I neglected to read that the recipe instructed me to increase my mixer’s speed as I slowly added the liquid ingredients to the dry ingredients. And me? Well, I just kinda dumped it all in without increasing the mixer speed at all.

Talk about being a hypocrite and ignoring my own tips and tricks. I betrayed my number 1 cardinal rule: follow the recipe exactly as it is written!

I consulted my bible, How Baking Works, to see if the way things were mixed impacted the final results of the baked good (and therefore, the batter). Lo and behold, the first chapter titled “The Overview of the Baking Process” (so, mind you, the intro of the book) described 10 different mixing methods and what each produced. Subtle differences produced highly variable results. 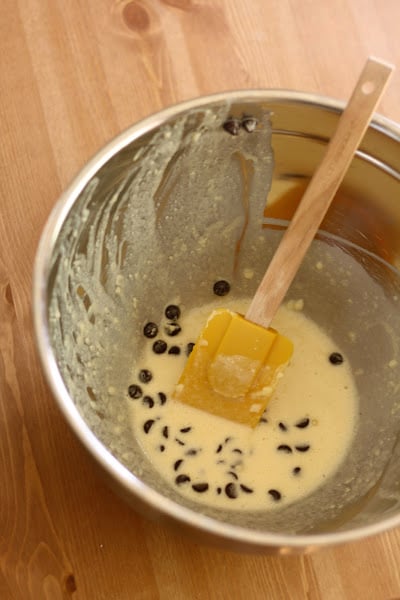 Again, straight away, you can see something amiss. The cheesecake filling was wayyyy too watery. The recipe tells me to beat cream cheese, sugar, 1 egg, vanilla, and salt together until the mixture is smooth and fluffy.

I never got the cheesecake mixture to be any of those things. In the end, the mixture had strange white clumps in it (for instance, you can even see clumps sticking to the sides of the bowl in the picture above) but despite these lumps, the mixture still had the consistency of water! Well — lumpy water at least. When I scooped up a tablespoon of the filling to place on top of the clumpy batter, it was like scooping up water to drizzle on rocks. In fact, you can see the results below: 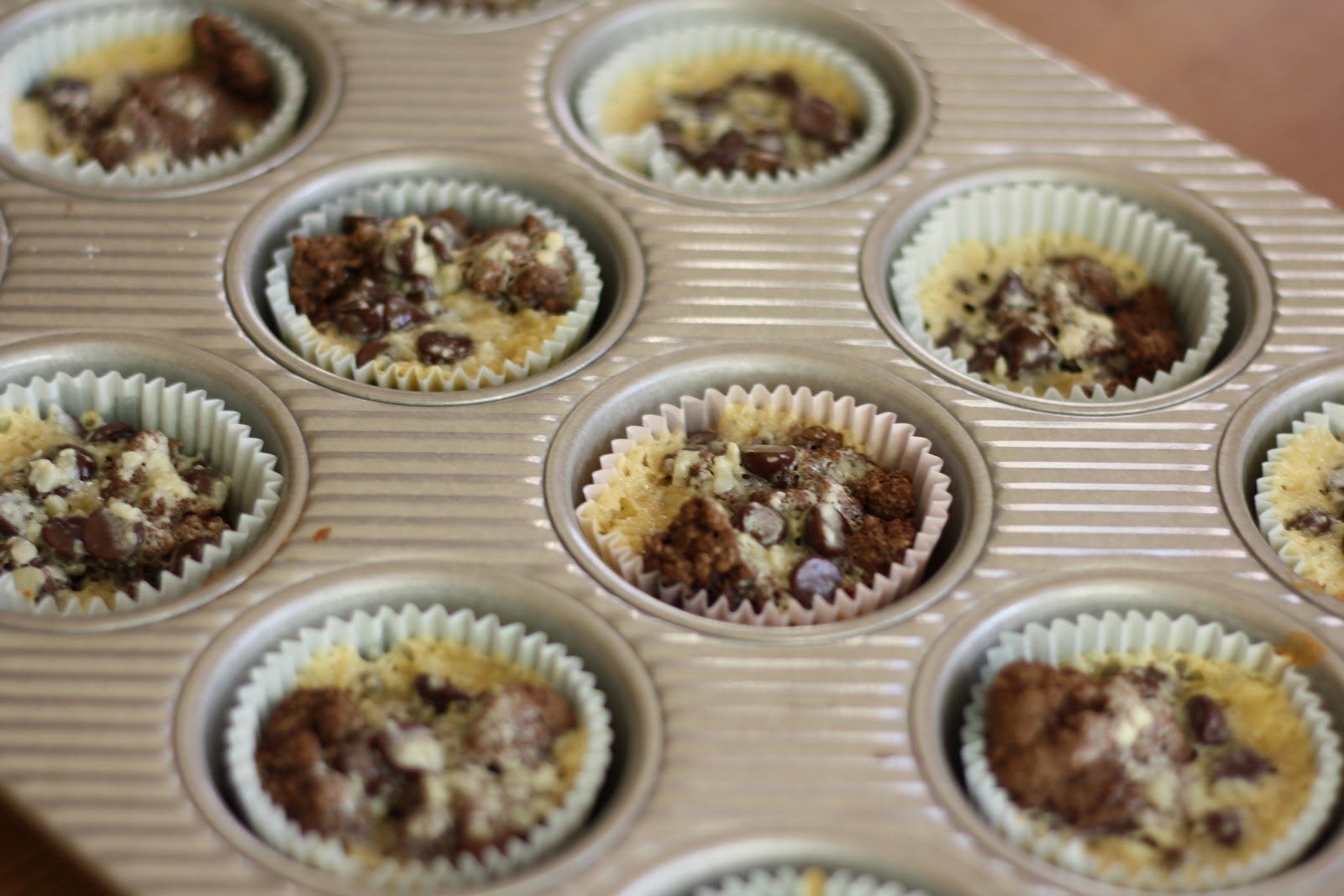 Yikes.
I then did a Google search for Hummingbird Bakery Black Bottom cupcakes to see how other home bakers’ creations had turned out. While most admittedly turned out better than mine, I noticed a pattern between the results: 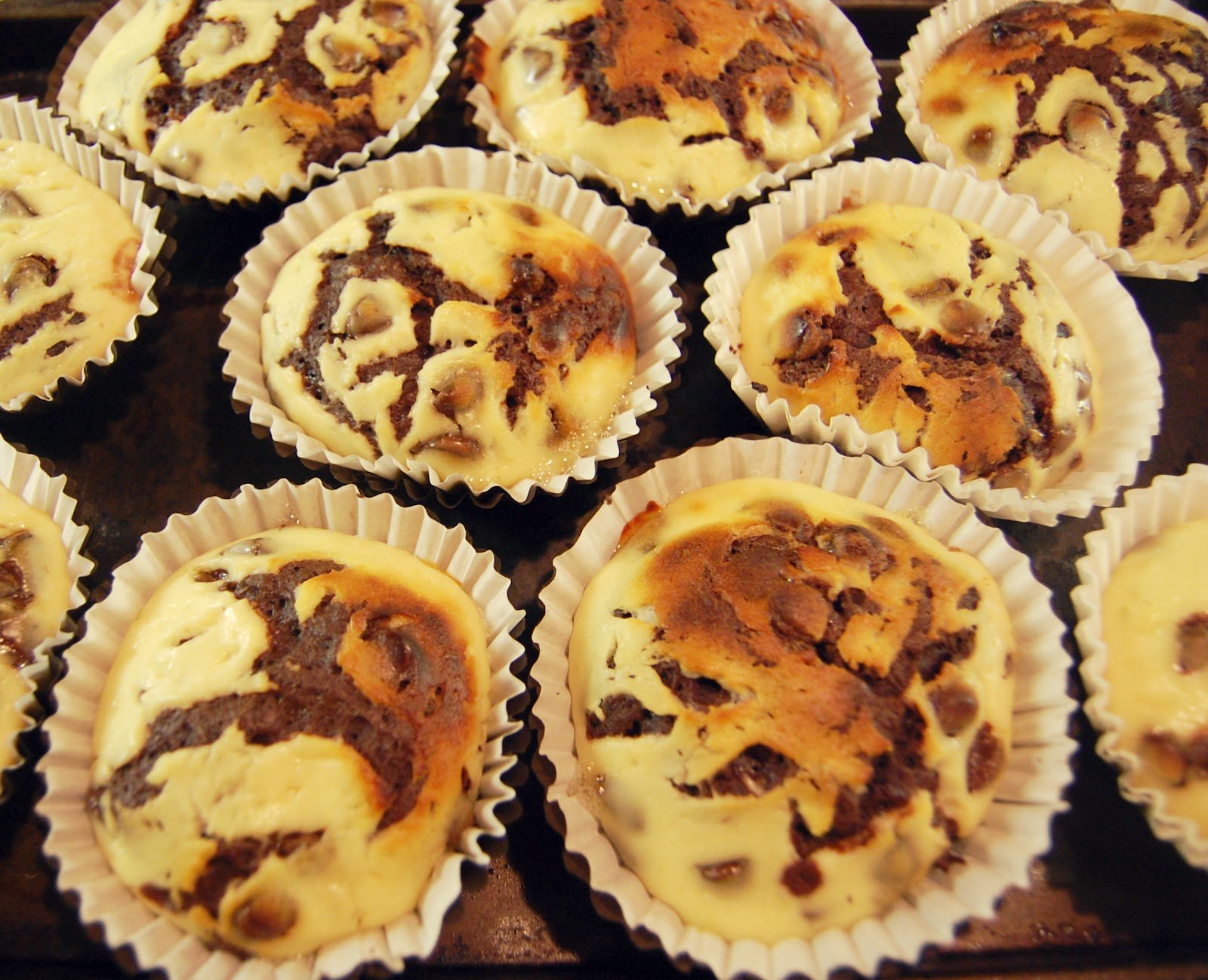 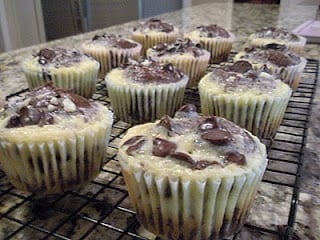 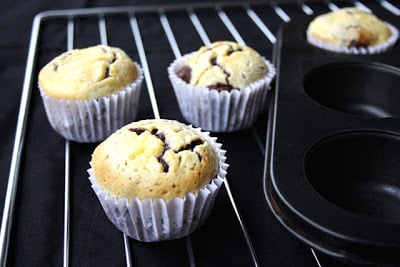 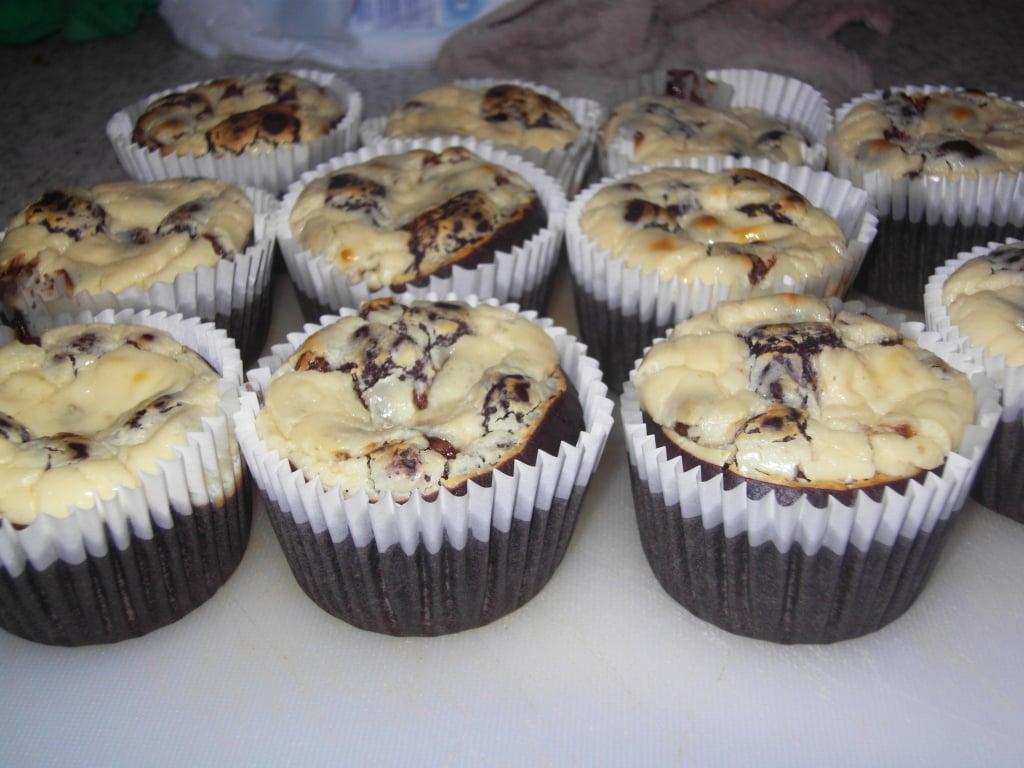 (from Amanda’s Budget Baking)
Most of the cakes didn’t look anything like the Hummingbird Bakery’s Black Bottom cupcakes! Almost all bakers mentioned that their cheesecake filling had turned out way too liquidy. More than one baker admitted to having made this recipe a bunch of times before finally achieving success. In fact, one baker was so unimpressed by the recipe, she wrote an entire rant against the cookbook.
Well.
It really is too bad that the picture they included in the cookbook looks significantly different from what the results actually produce. But no matter, I’ve got bigger fish to fry. If the cupcakes aren’t going to turn out as picturesque as they are in the cookbook, I at least want my batch to look more like Amanda’s from Amanda’s Budget Baking.
So first order of business: fix that chocolate batter.