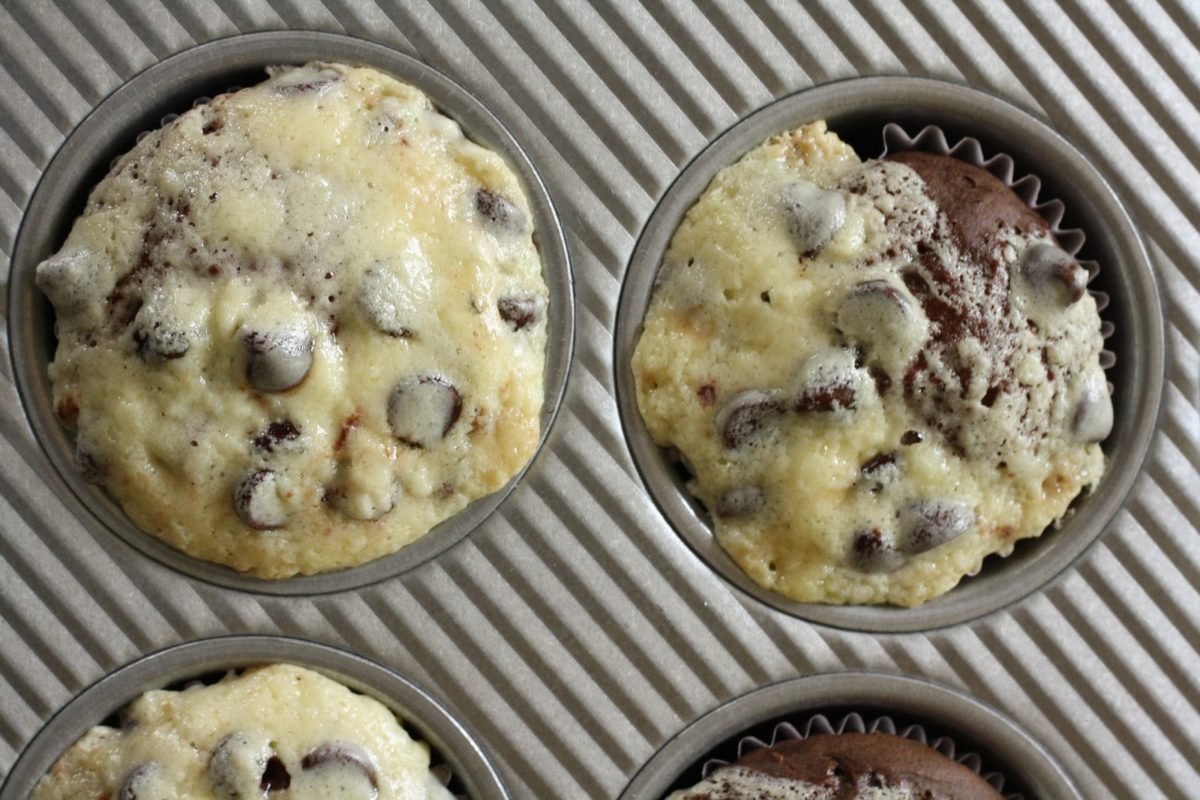 Better, right? Okay, so this time I made sure to follow the recipe’s instructions PRECISELY. In fact, it took me twice as long to cook this batch of Black Bottom cupcakes because I kept double-checking each step of the recipe along the way. So when I got to the part about adding the liquid ingredients […] 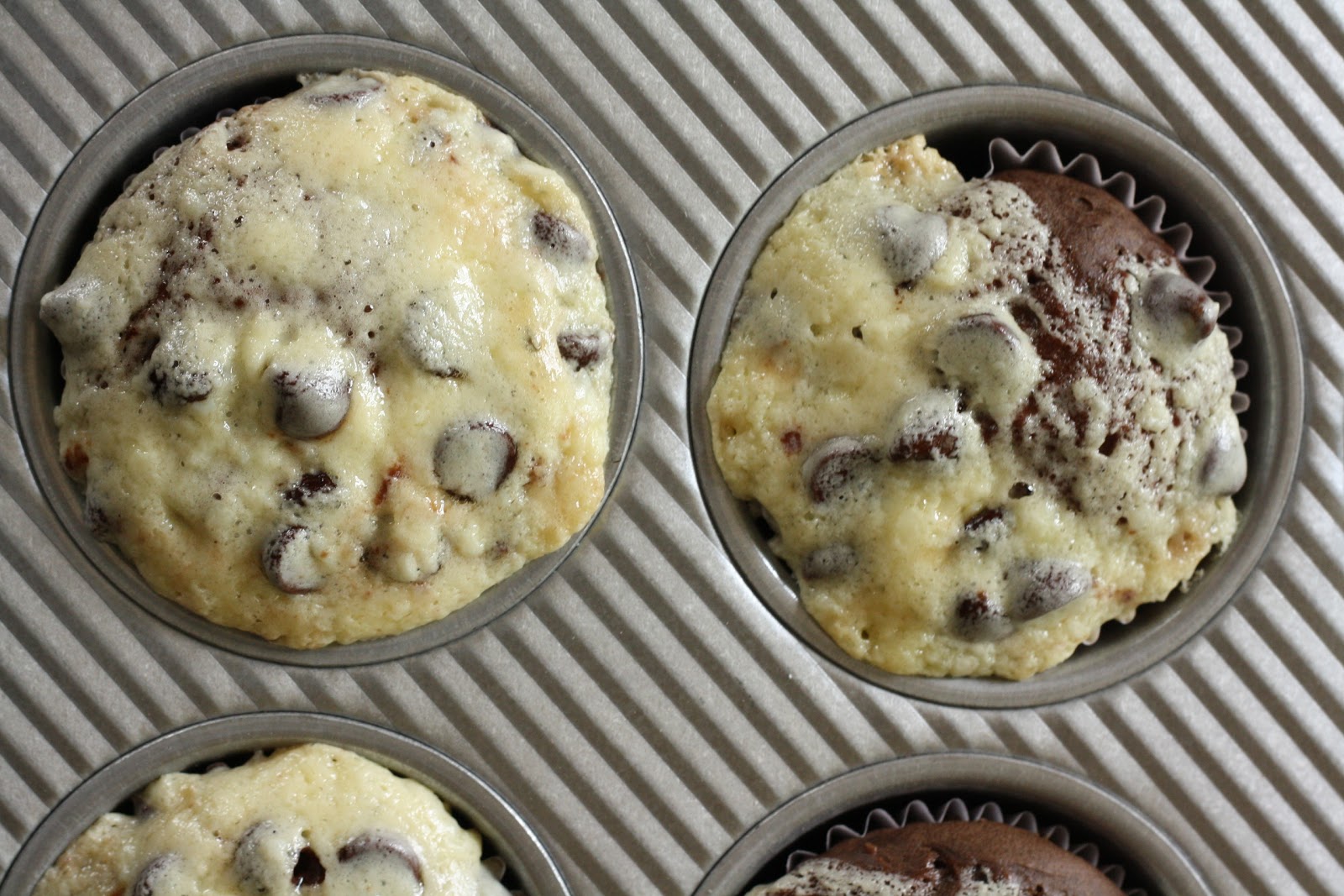 Better, right?
Okay, so this time I made sure to follow the recipe’s instructions PRECISELY. In fact, it took me twice as long to cook this batch of Black Bottom cupcakes because I kept double-checking each step of the recipe along the way. 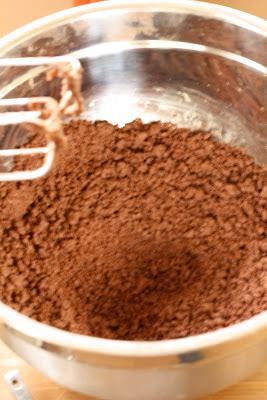 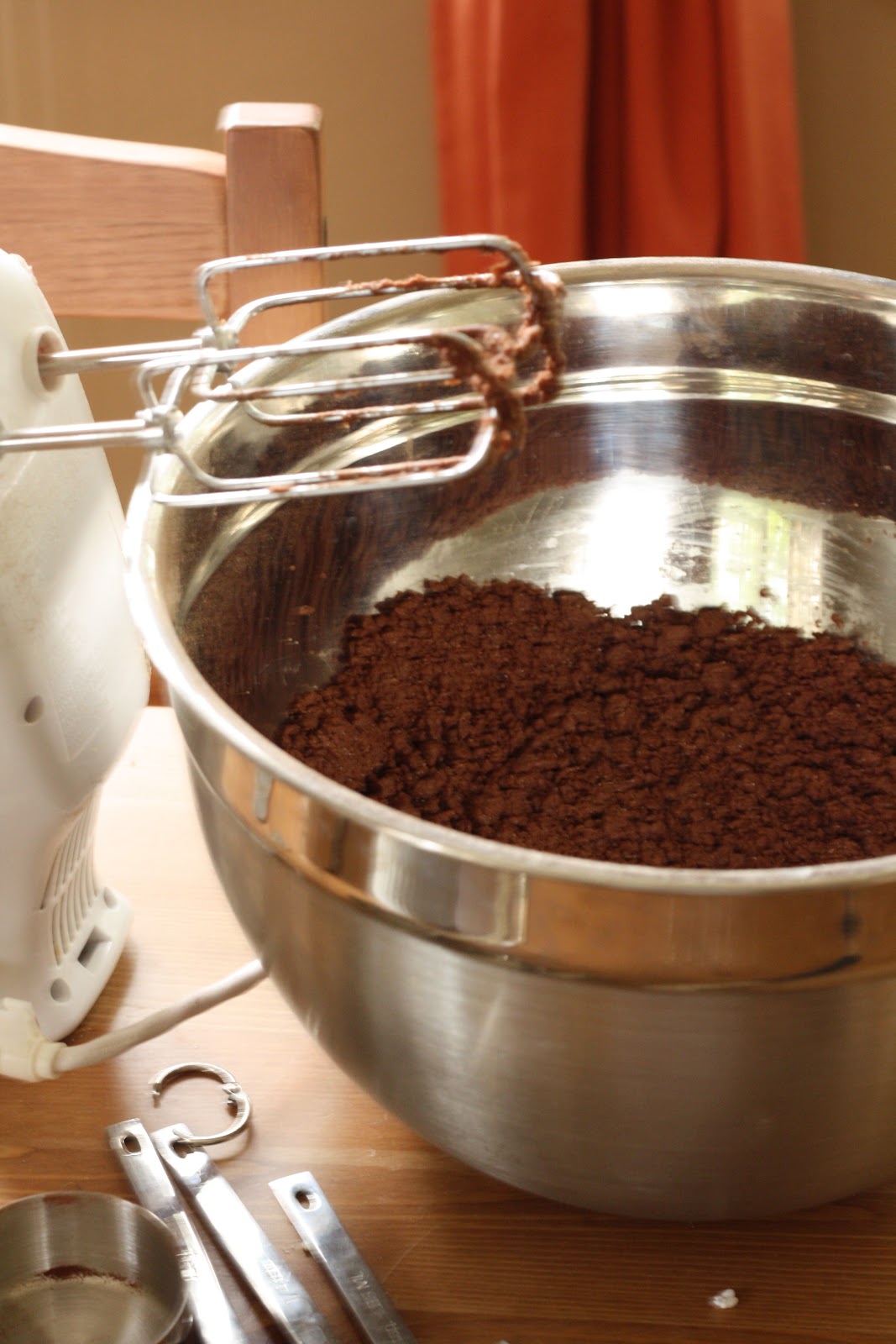 What gives?!
I was confused for a second, but then remembered something I had read in Michael Ruhlman’s Ratio: The Simple Codes Behind The Craft of Everyday Cooking. According to Ruhlman, a cup of flour can weigh anywhere between 4 and 6 ounces. That’s because the weight of flour can be affected by humidity — that is, the greater the humidity, the more moisture in your flour. Since Denver (and most high-altitude places in general) is a very dry place, I’m willing to bet that the old bag of flour I’ve been using to bake has dried out and has the least amount of moisture in it as possible.
With that theory under my belt, I decided to add in another 1/4 cup of water to the batter: 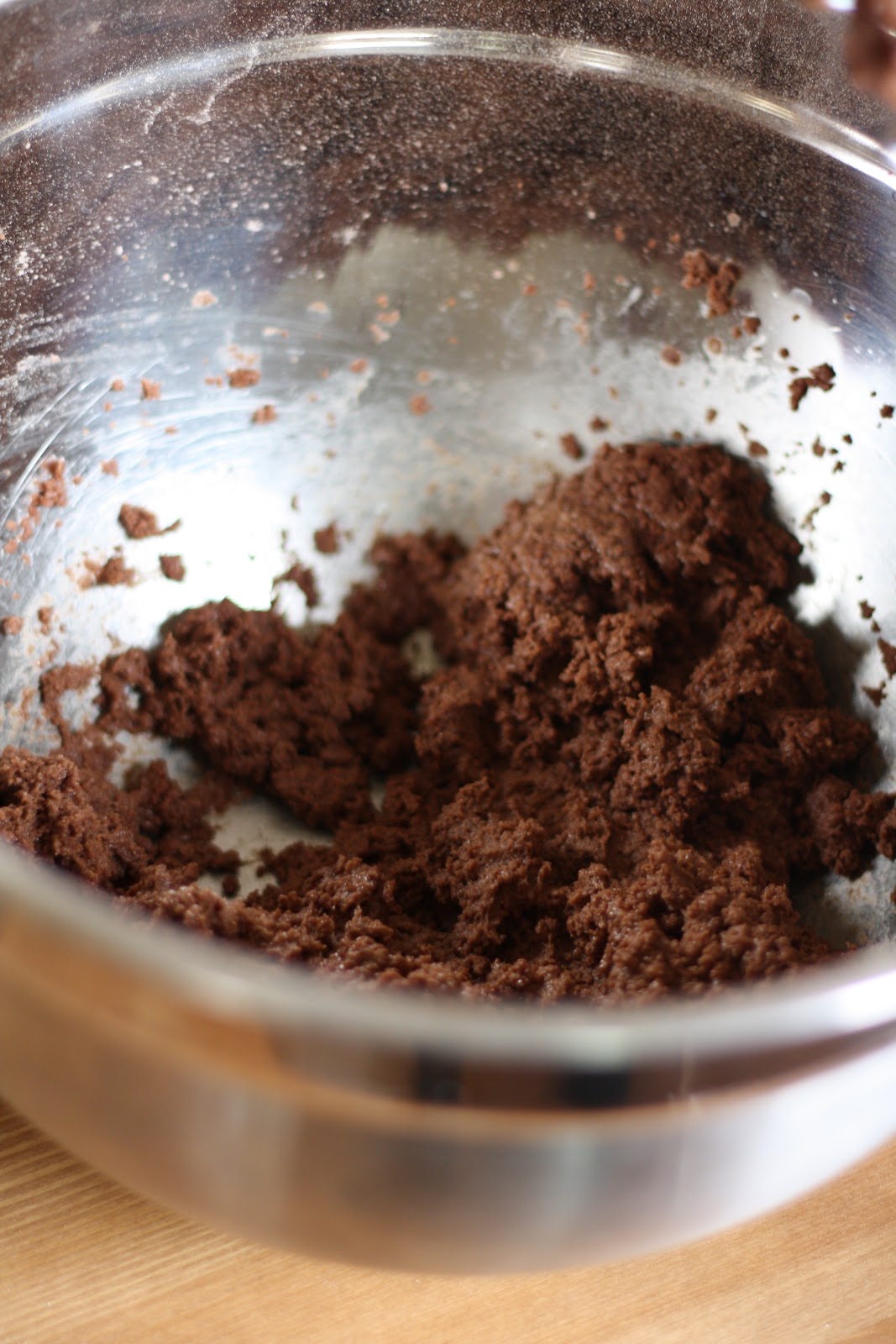 Hey, that’s not bad. The Hummingbird Bakery Blog describes Black Bottom cupcakes as having a thick batter that resembles uncooked brownie mix. The mixture above is definitely more along those lines. Still not liquidy enough though… so I added another 1/4 cup of water: 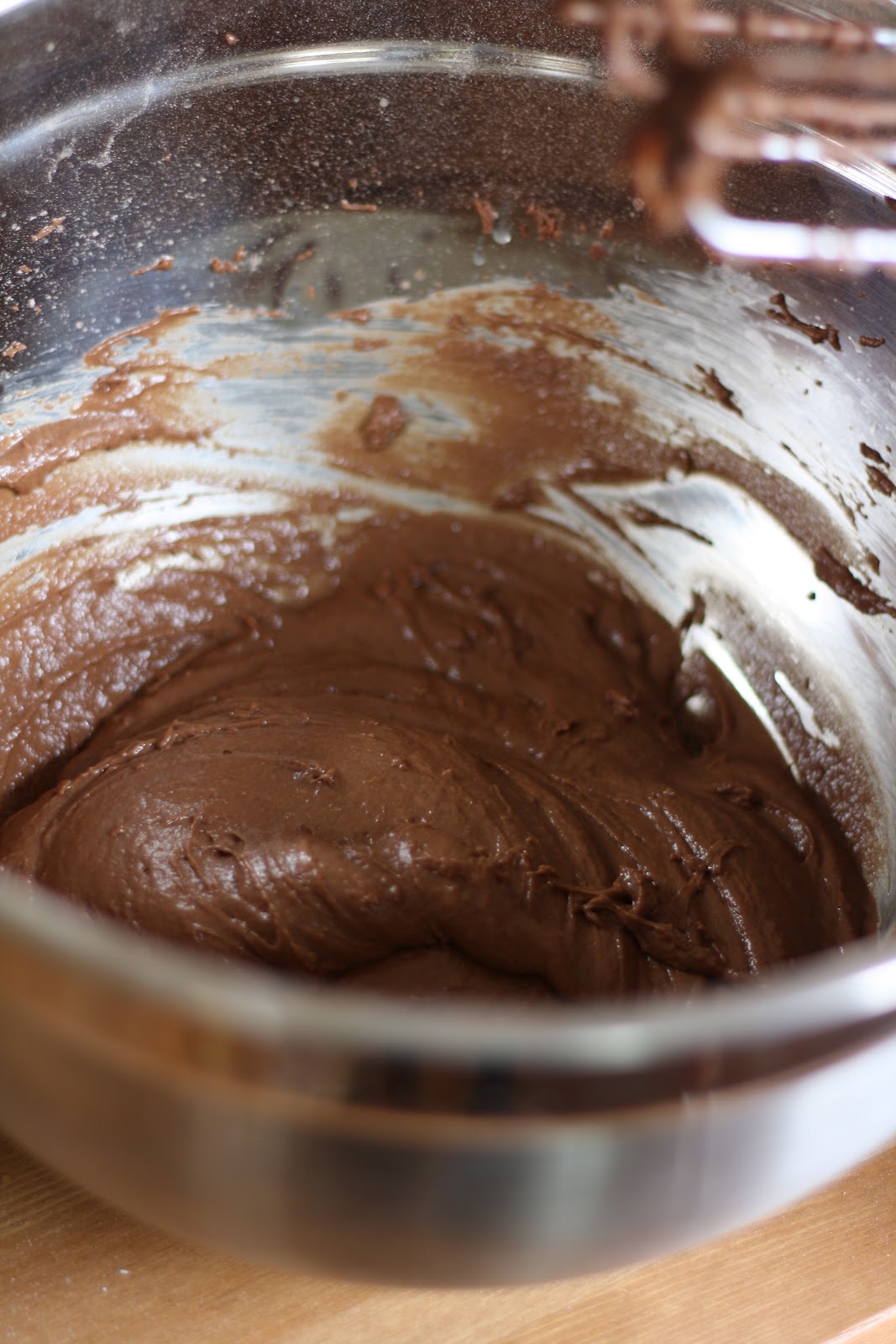 Boom! That’s more like it. I’m a little worried that 1/2 cup more water than what the original recipe calls for might be a little too much, but when I doled out the batter into the cupcake cases in the muffin tin, I noticed that I had enough batter for exactly 12 cupcakes. That’s a sign of something good, right?

Not bad. They actually look like uncooked cupcake batter now, as opposed to my first try where they resembled clumps of dirt. Those cakes looked like scoops of dirt/sand covered with some sticky yellow liquid that was actually the cream cheese batter.

Speaking of the cream cheese batter, that also turned out better this time around: 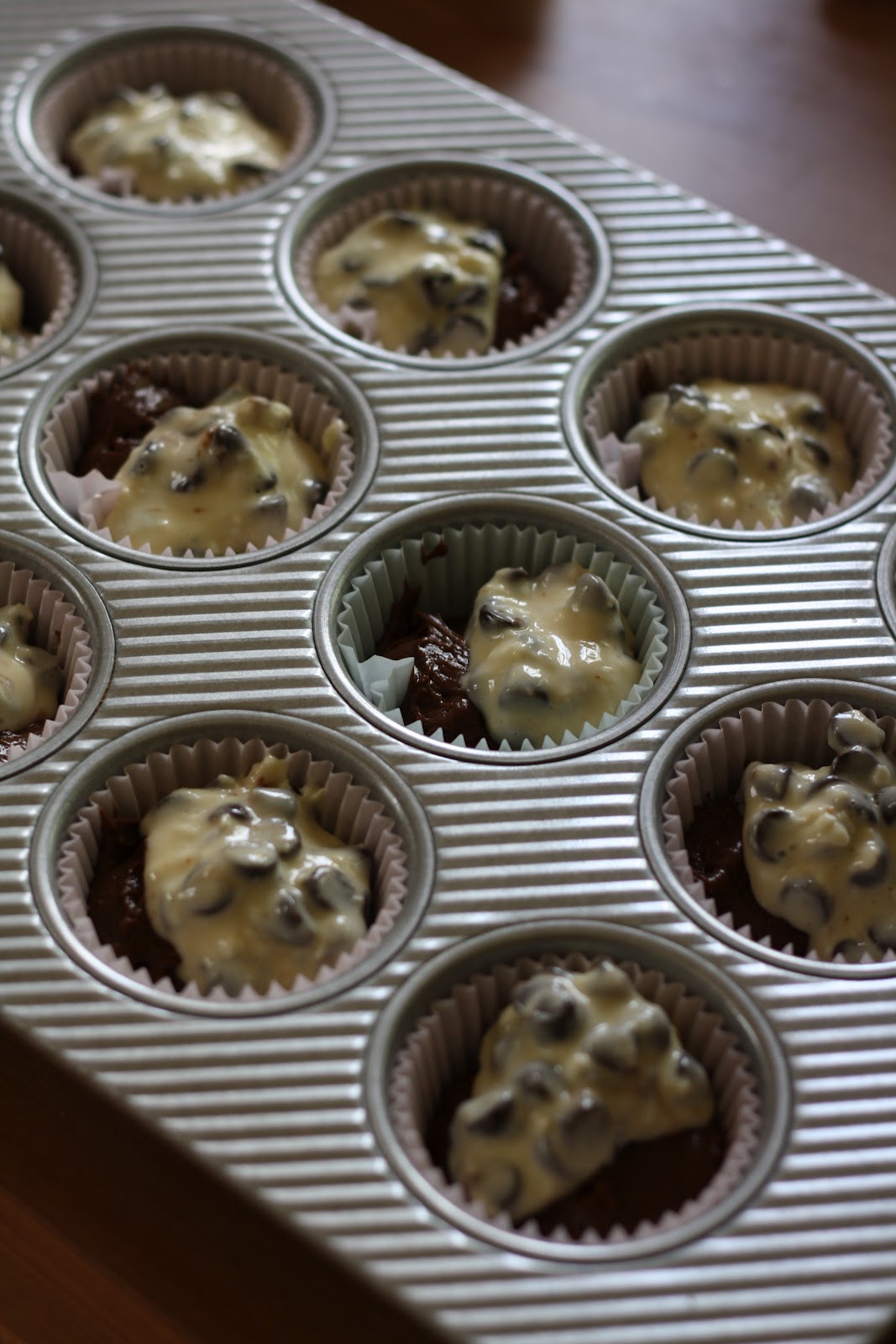 So how did the cupcakes turn out in general? 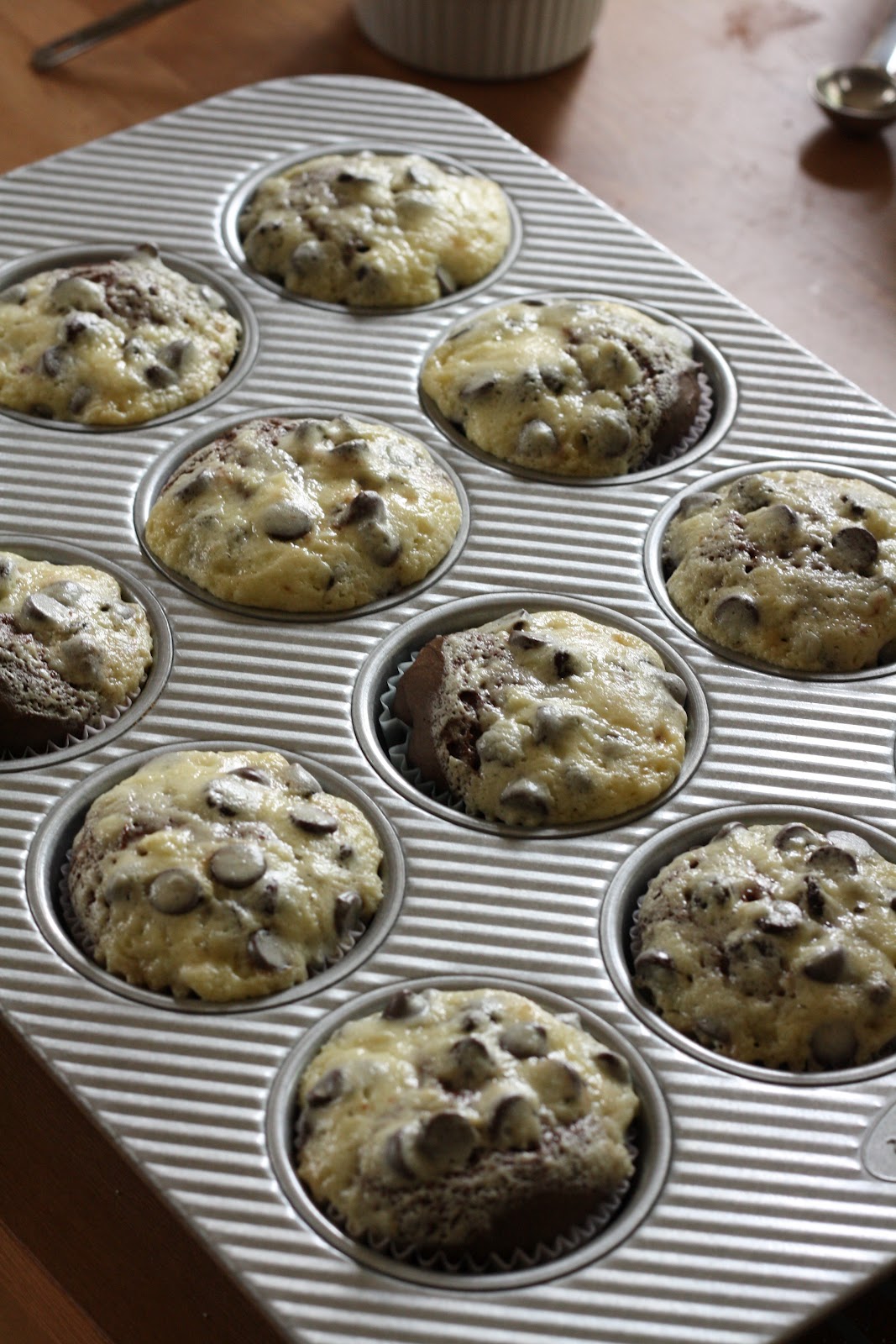 They definitely look more like other bloggers’ attempts at Hummingbird Bakery Black Bottom cupcakes, so there’s that. But a closer look reveals more flaws: 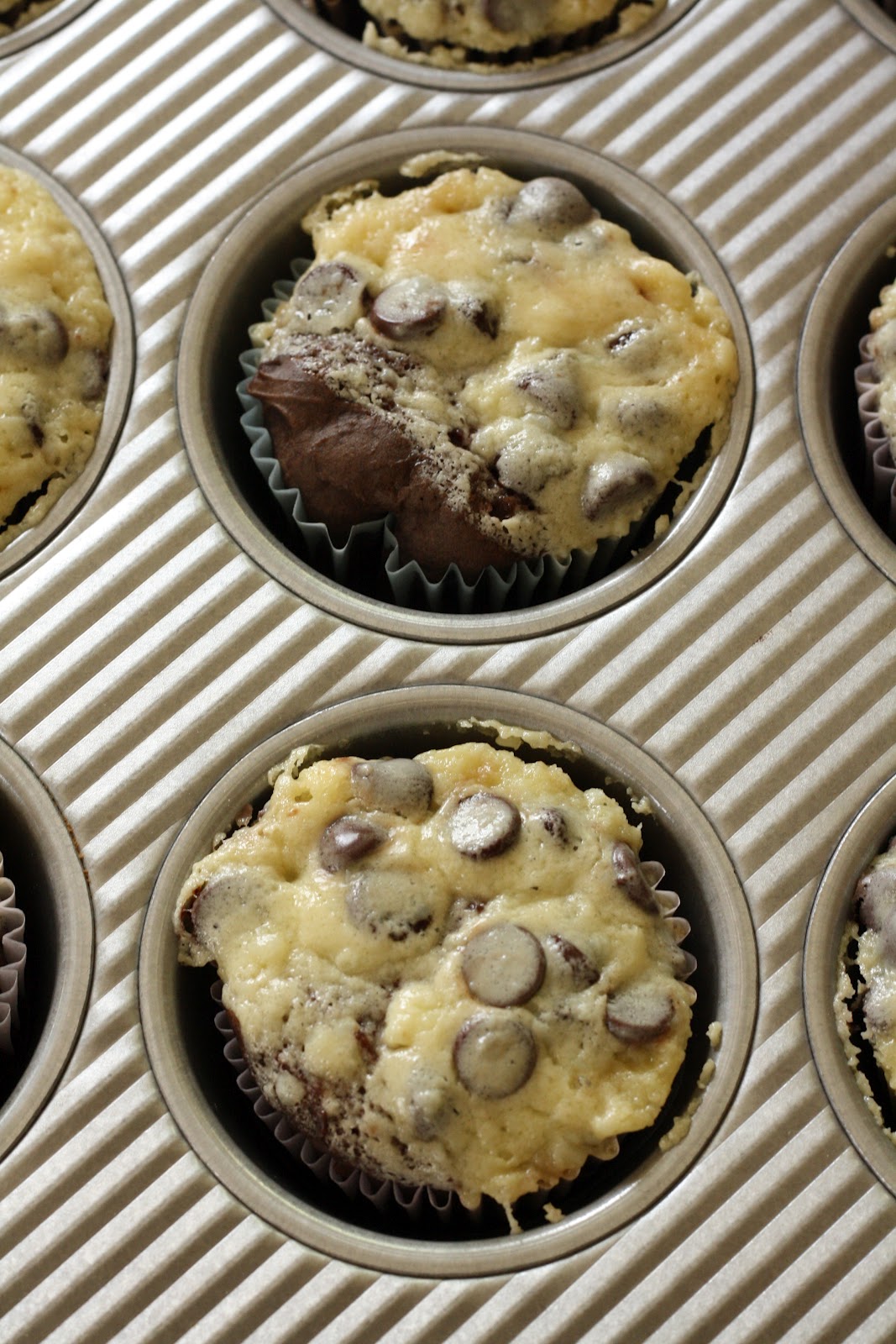 In fact, I’d actually say the entire thing was pretty undercooked since it was hard to get a good grip on the cupcake to begin with. That is, when I did manage to pick up the cupcake, not only did the yellow cheese cake batter come off into my fingers, but the chocolate cake base felt mushy and squishy, collapsing inwards from the pressure of my fingers. You can see what I mean in the pictures below: 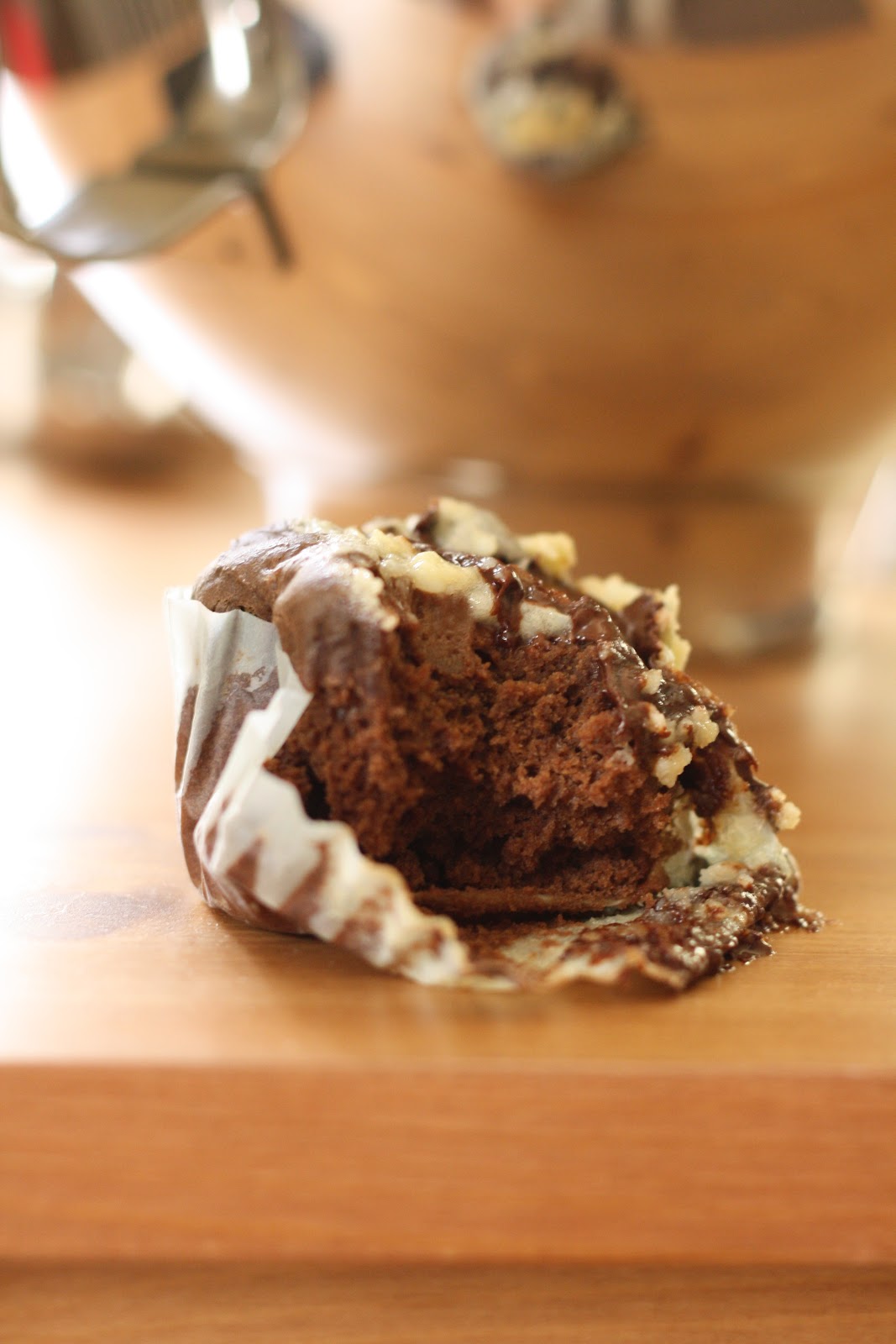 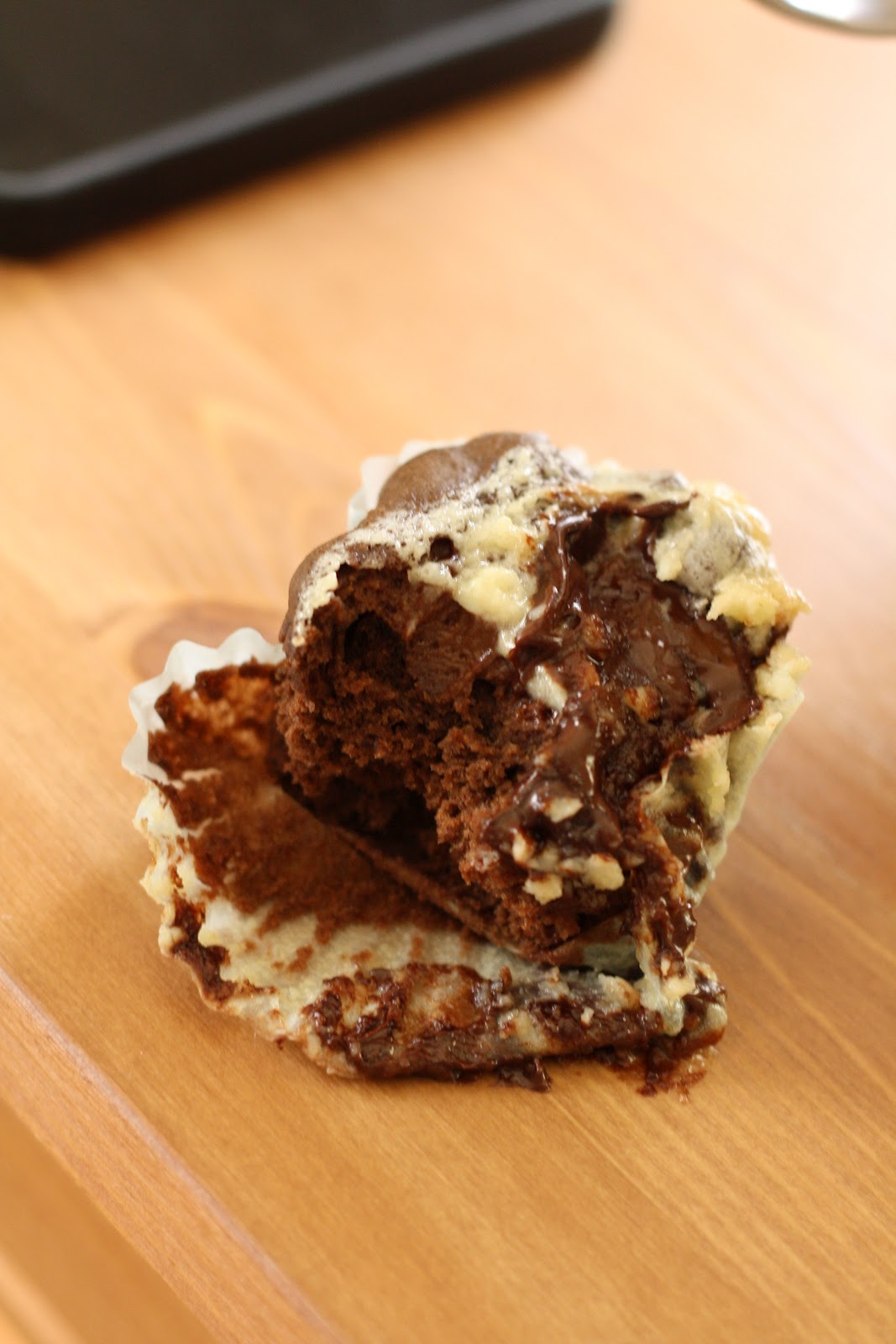 Well, that’s unsurprising since a common problem I’ve had in the past are sea-level recipes resulting in undercooked, liquidy goods. Remember that at higher altitudes, water boils at lower temperatures which means that it takes longer for foods to cook in water since the water isn’t as hot when it’s boiling. I’ve almost always had to increase the temperature of most Hummingbird Bakery recipes in order to get the baked goods to set quickly before overexpanding.
So my next move… increasing the oven temperature!
But wait!
How did the cupcake taste? 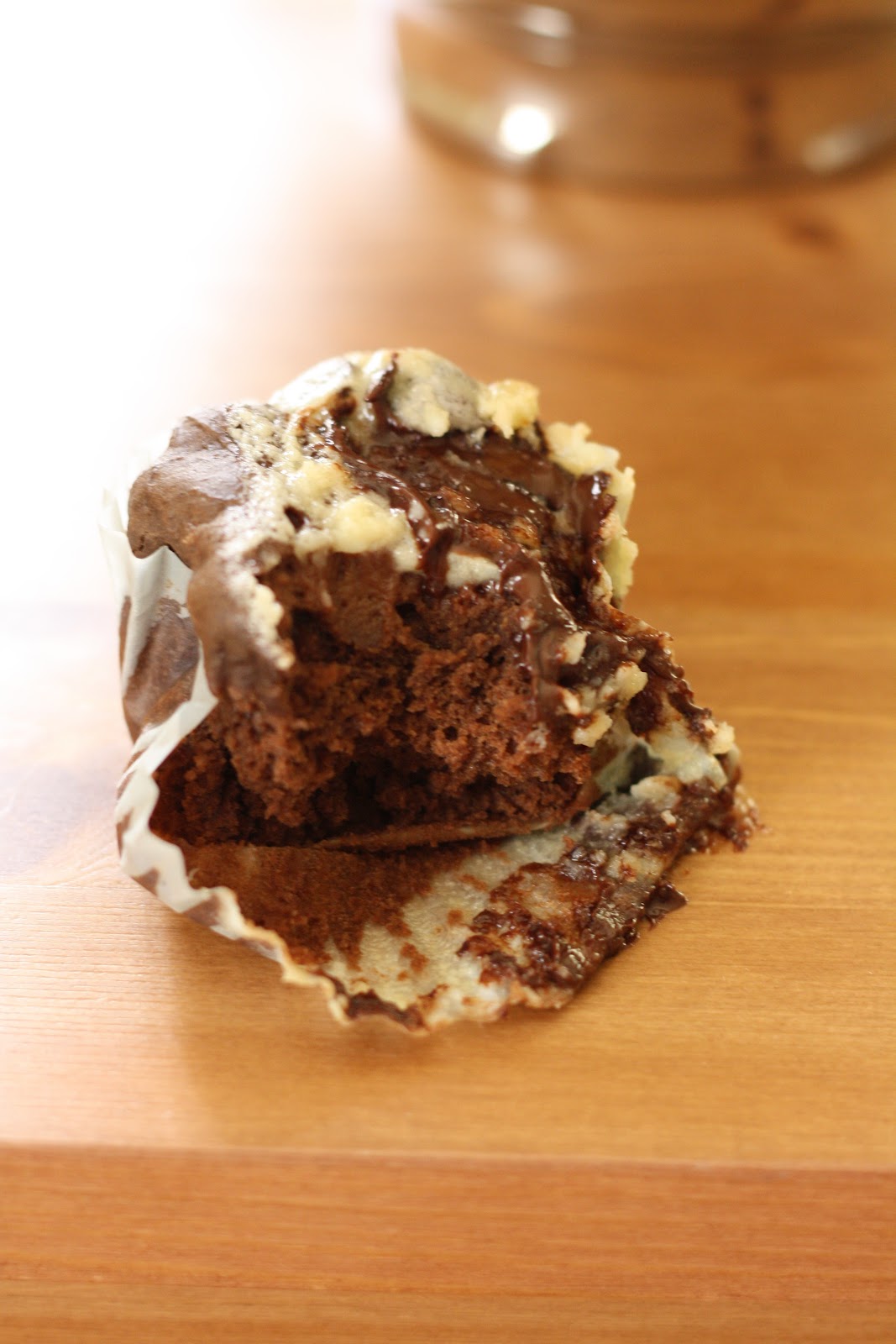 Not bad, actually. The cheesecake topping was a little bit too eggy and sticky — definitely a sign of being undercooked — but the chocolate cake base was shockingly good. It was still a little too mushy and soft, but the cake was definitely cooked (or only slightly undercooked).

The taste test has given me some good guidelines on how to proceed with the temperature adjustments. I plan on increasing the temperature just slightly — maybe experimenting with only a 10 – 15 degree (F) increase in temperature? Remember, it’s easy to burn chocolate, and the chocolate cake base really seemed fine at its current temperature.

In any case, stay tuned for the next post which will be all about temperature adjustments. Excited? Because I am.