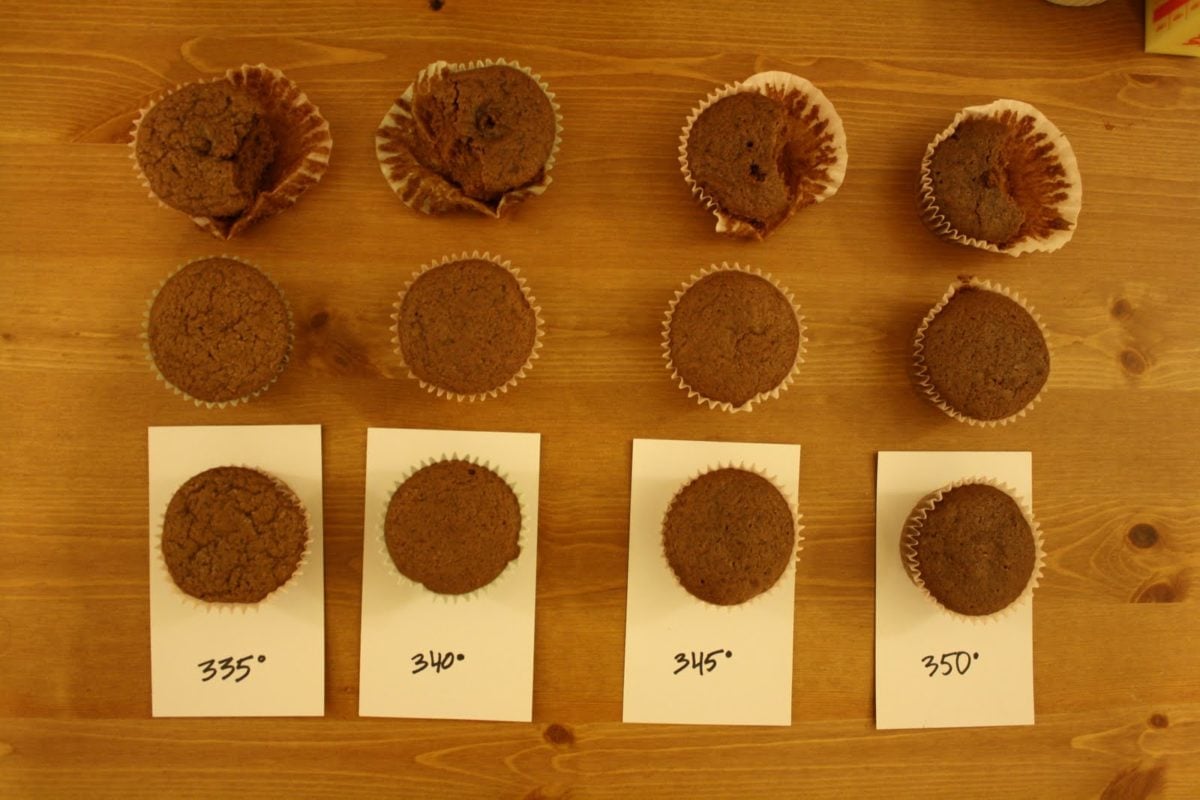 Between all the food photography craziness and the recent feature of my last post on foodgawker (!!!!!!!!) and TasteSpotting (!!!!), I nearly forgot to tell you — I cracked the recipe for Hummingbird Bakery chocolate cupcakes. My earlier theory — that the chocolate (from the cocoa powder in the batter) needed to be set in […] 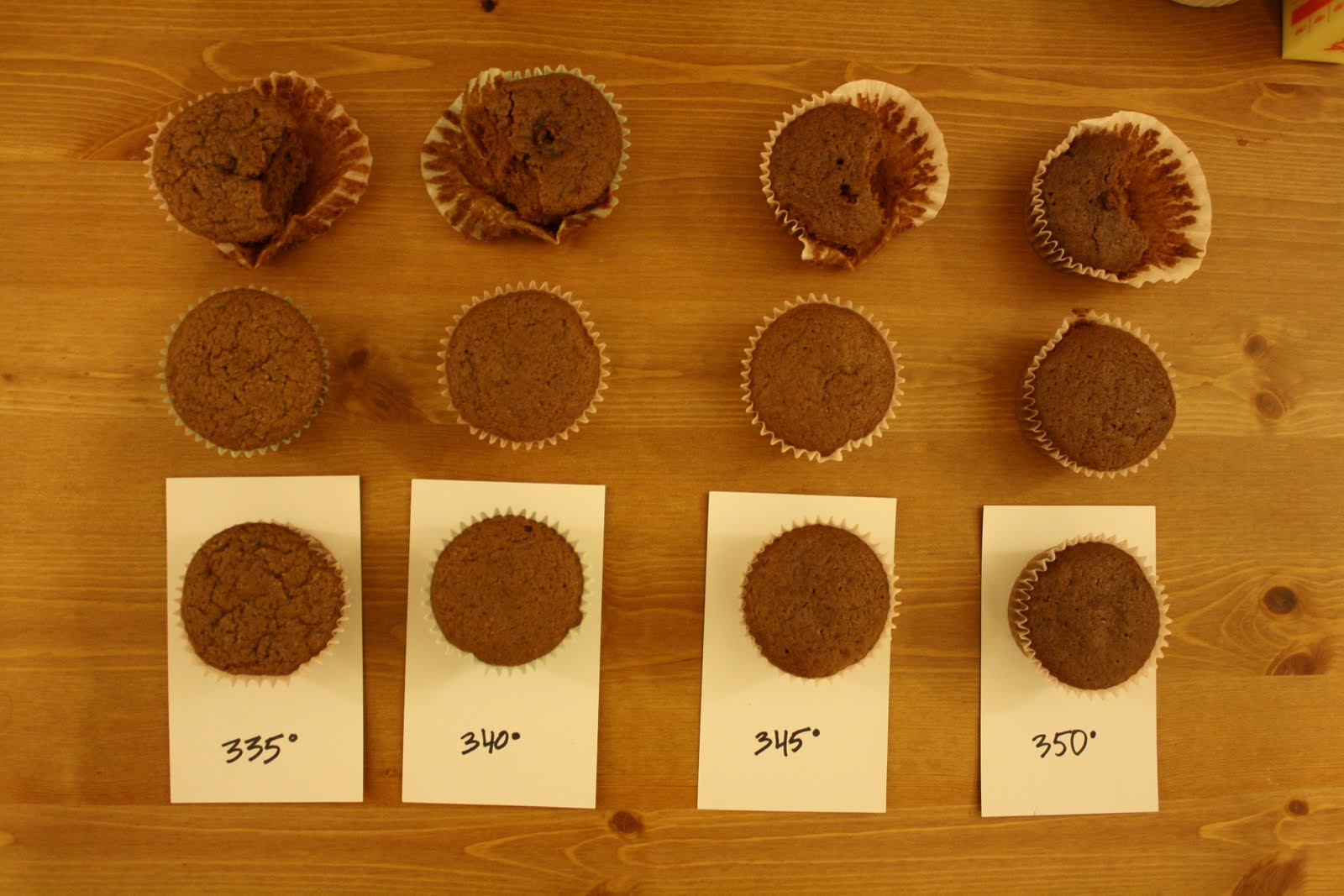 Between all the food photography craziness and the recent feature of my last post on foodgawker (!!!!!!!!) and TasteSpotting (!!!!), I nearly forgot to tell you — I cracked the recipe for Hummingbird Bakery chocolate cupcakes.

My earlier theory — that the chocolate (from the cocoa powder in the batter) needed to be set in order to prevent the cratering that was occurring during the cooling process — turned out to be right. Instead of leaving the chocolate cupcake to cool on its own devices, I cranked the temperature up from the recommended 325 (F) to allow the extra heat from the temperature increase to “set” the structure of the cupcake.

But it’s conventional wisdom that chocolate burns really easily. According to Paula Figoni of How Baking Works, chocolate must be melted carefully as they contain a mix of proteins and carbohydrates that are easily overheated. This is why chocolate must be melted using a double-boiler — even low, direct heat from a stove top is enough to turn the chocolate into a burned, thick, lumpy mess.

The vanilla cupcakes needed an increase of 50 (F) — from 325 (F) to 375 (F) — to bake properly at high-altitude. Because of chocolate’s highly-flammable (is that the right word? easily burnable?) properties, I hypothesized that they would need less of a temperature increase. So I started out conservatively with my temperature adjustment and increased the recipe’s temperature of 325 (F) by 10 degrees to 335 (F). This is what the cupcakes looked like when they cooled: 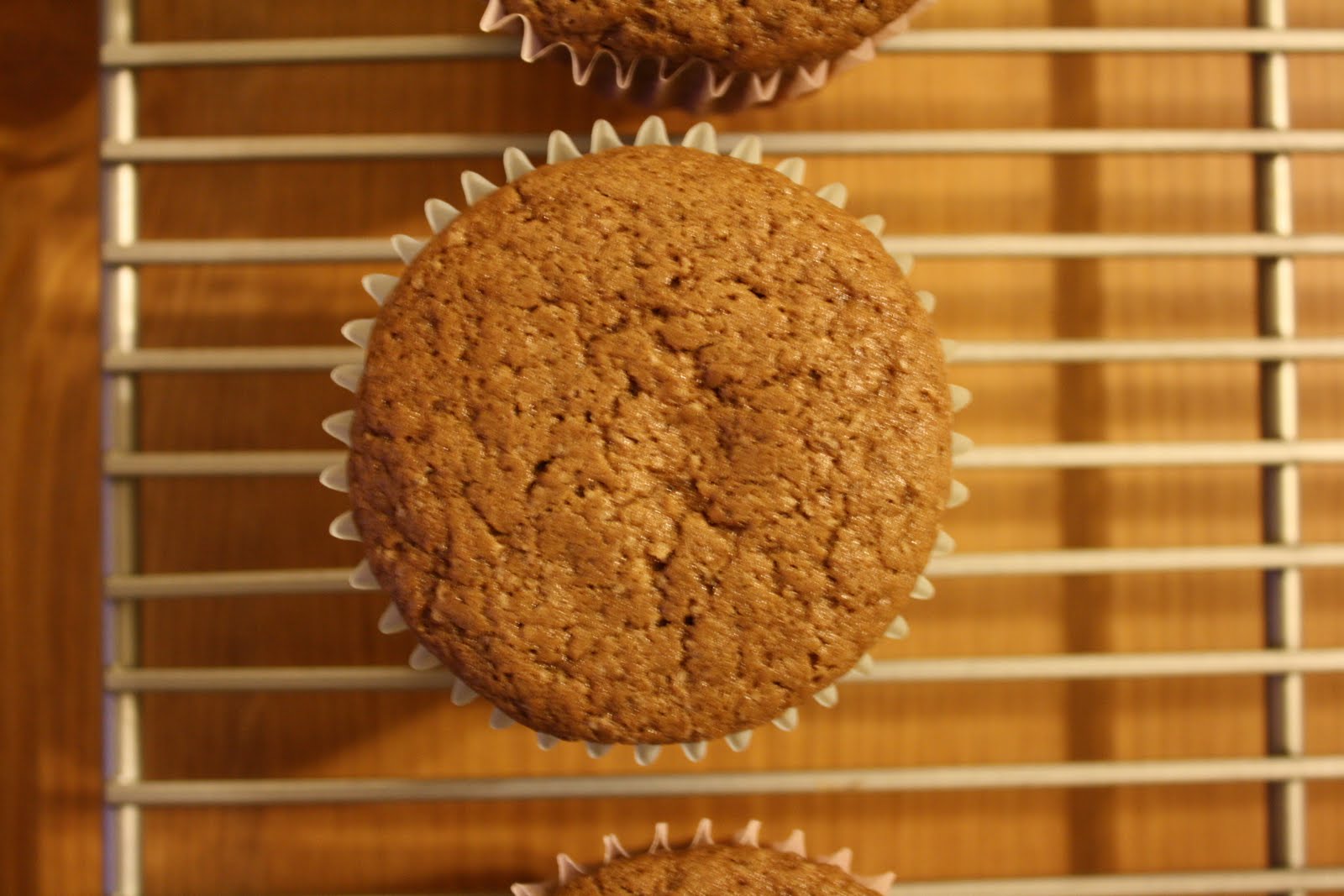 Hm. Not great right? You see that weird dent in the middle of the cake? That’s when I poked the top to see if it would “spring back” like the Hummingbird Bakery Cookbook described. Nope. Left a giant fingerprint. Not to mention that when I tested the cupcake at the recommended bake time of 20 minutes, the toothpick came out with a ton of cake batter:

Definitely still undercooked. Look at the bottom part of the toothpick! It looks almost liquidy.

Hard to tell from the aerial shot, but they pretty much looked the same as the cupcakes baked at the previous temperature of 335 (F). That is, slightly sunken and cratered in. If you look closely, you can even see the same fingerprint in the bottom cupcake — meaning that this batch failed the Hummingbird “spring back” test. However, the batch did perform marginally better at the 20-minute toothpick test. Instead of coming out with liquid batter, the toothpick came out with a chunk of moist cake: 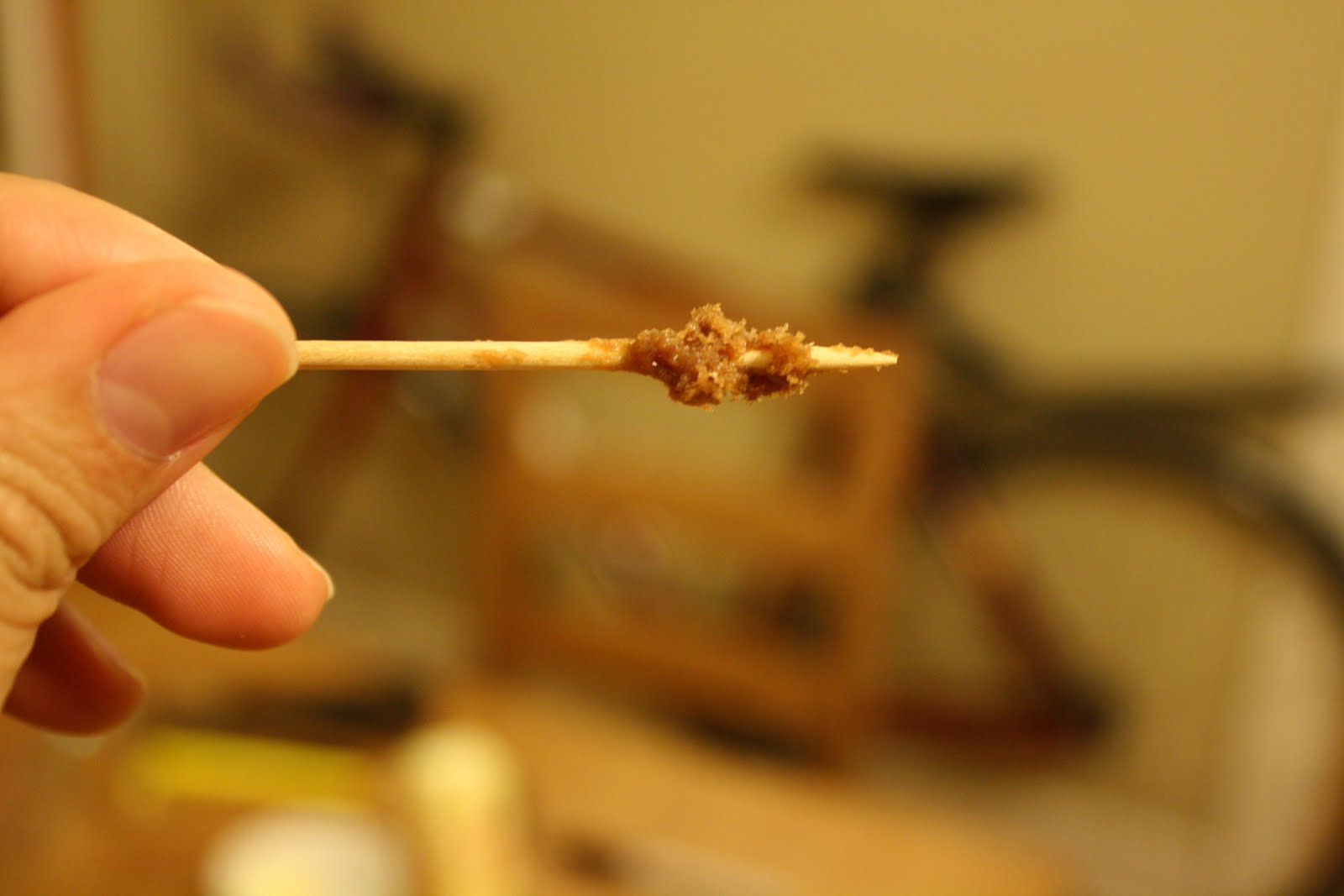 Sigh.
I rolled up my sleeves and cranked the oven from 340 (F) to 345 (F). This is what the cupcakes looked like when they cooled: 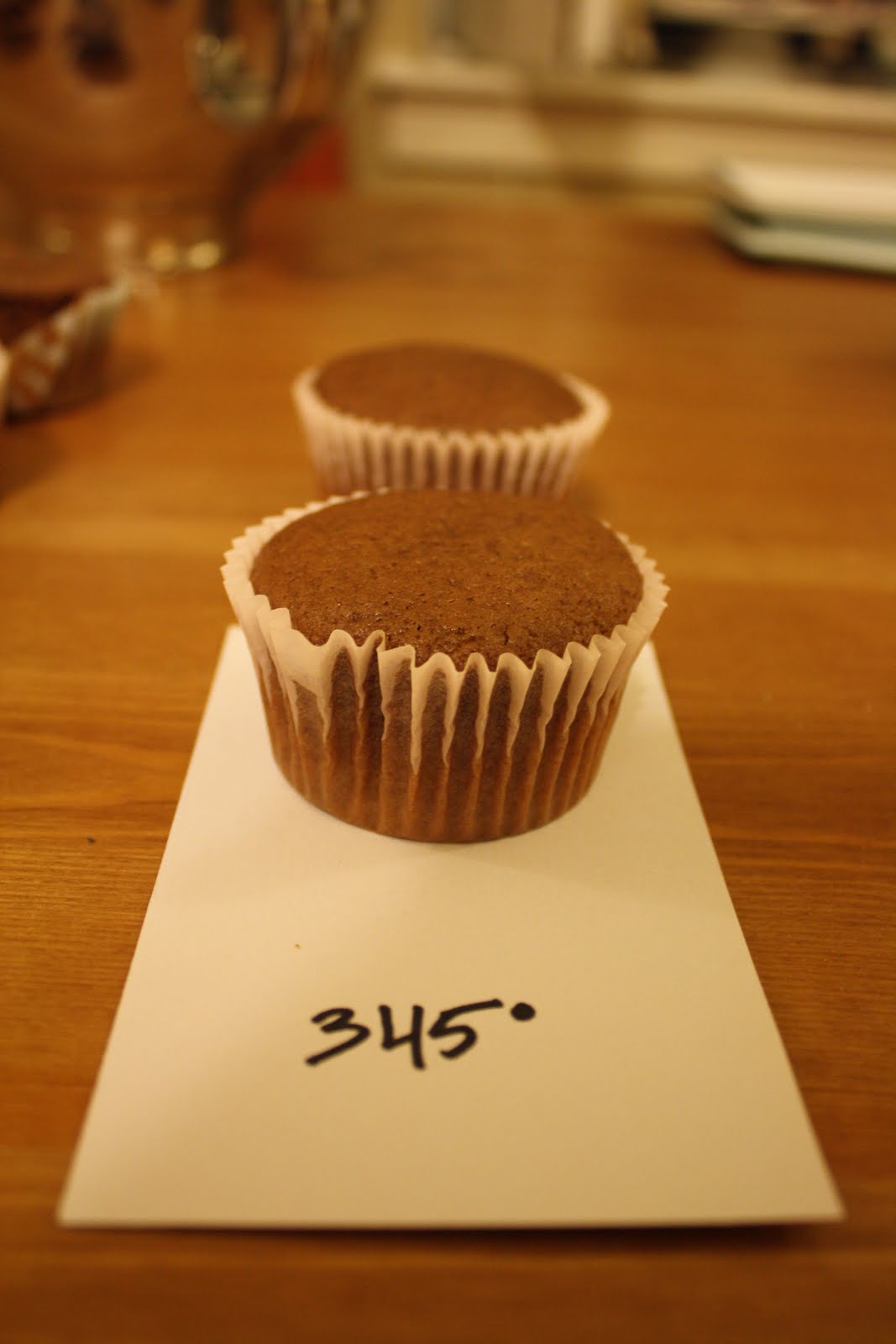 Wa-hey! Some more improvement here. Instead of the vaguely cratered, ever-so-slightly sunken-in cupcake tops, I had FLAT tops. The cupcakes still had a little bit of batter stick to the toothpick at the 20-minute test, but they definitely passed the Hummingbird tops-that-bounce-back test!

So how did these taste?

Hm. Not perfect. A little too soft and moist. Hummingbird Bakery cupcakes have a substantial fluffy, non-sticky crumb, but these were missing it.

I decided to try cranking up the temperature one last time — by this point, I was nearly out of batter. These are the final batch of cupcakes baked at 350 (F): 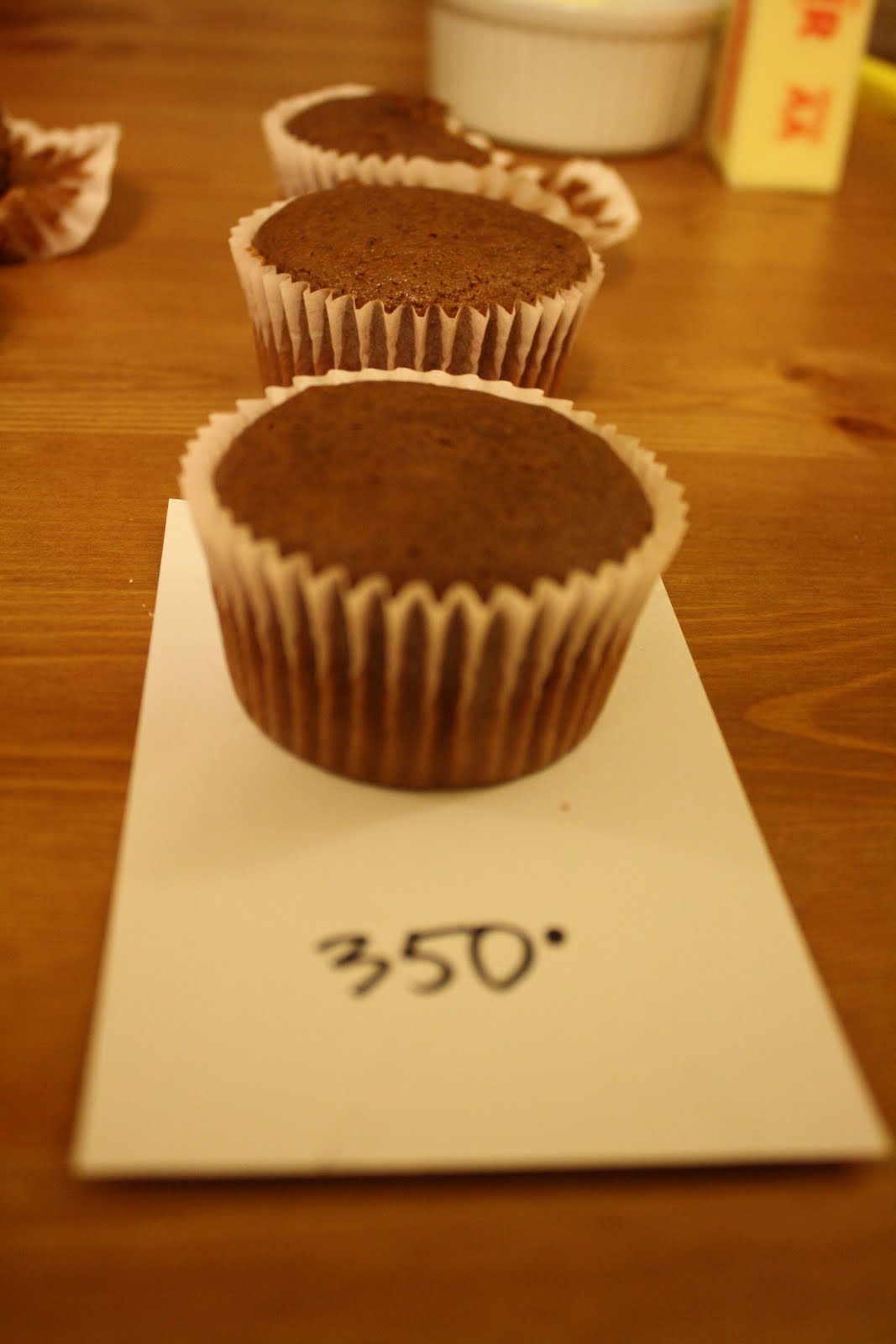 Why hello. Perfectly domed cupcake tops that spring back when touched! Exactly what the Hummingbird Bakery Cookbook described. But what about the taste? For the vanilla cupcakes, I ended up using an additional tablespoon of milk because my temperature adjustment dried them out. However, I adjusted the vanilla cupcakes by a full 50 (F) degrees; these chocolate cupcakes only received an adjustment of 25 (F) degrees.
I took an apprehensive bite and was pleasantly surprised to find that the cupcakes were perfectly moist. If anything, they were even a little too soft — softer than the Hummingbird Bakery chocolate cupcakes. BUT they did have an expected substantial crunch to them; that is, they had the signature Hummingbird Bakery crumb. Here is an inside look of the cupcake crumb: 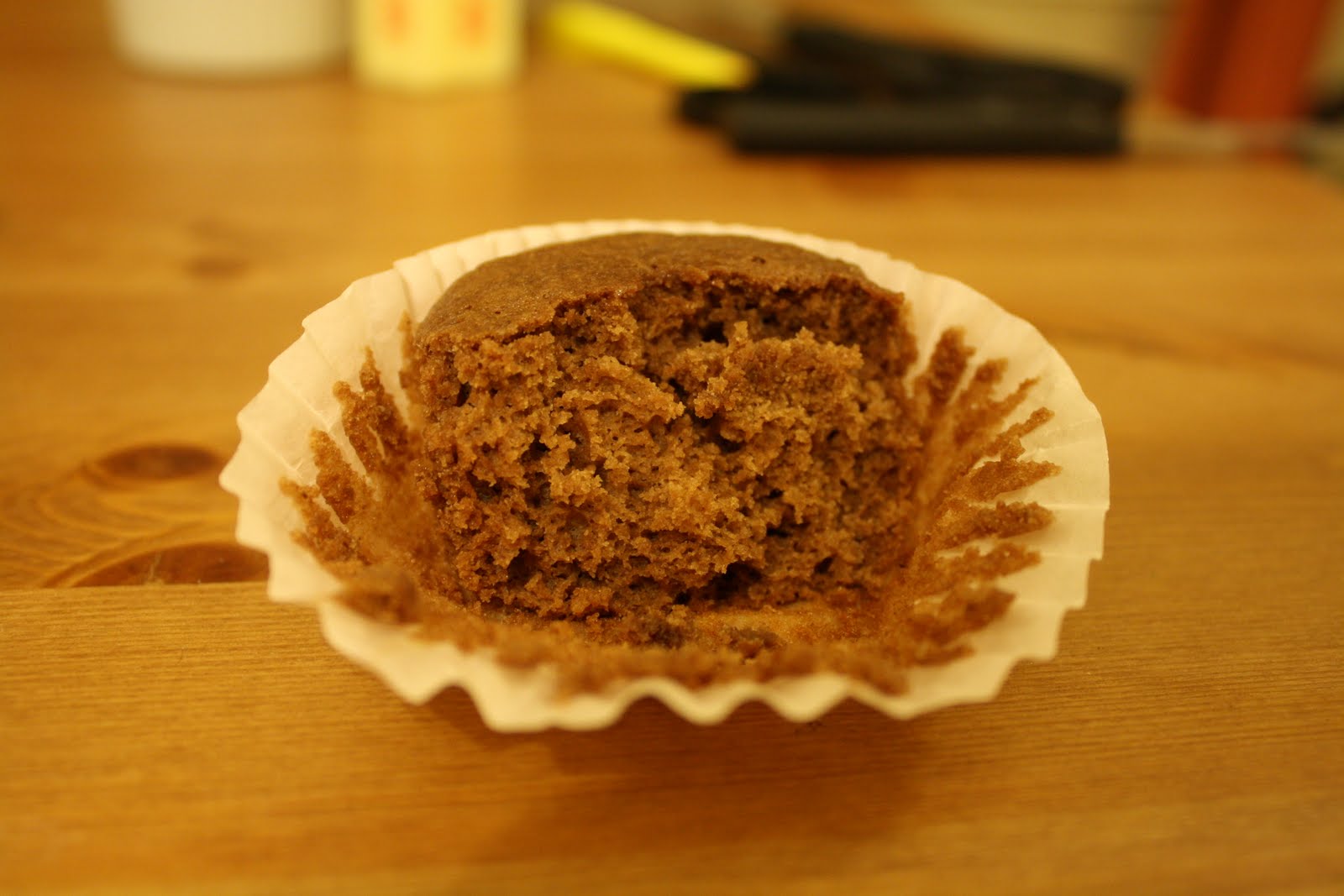 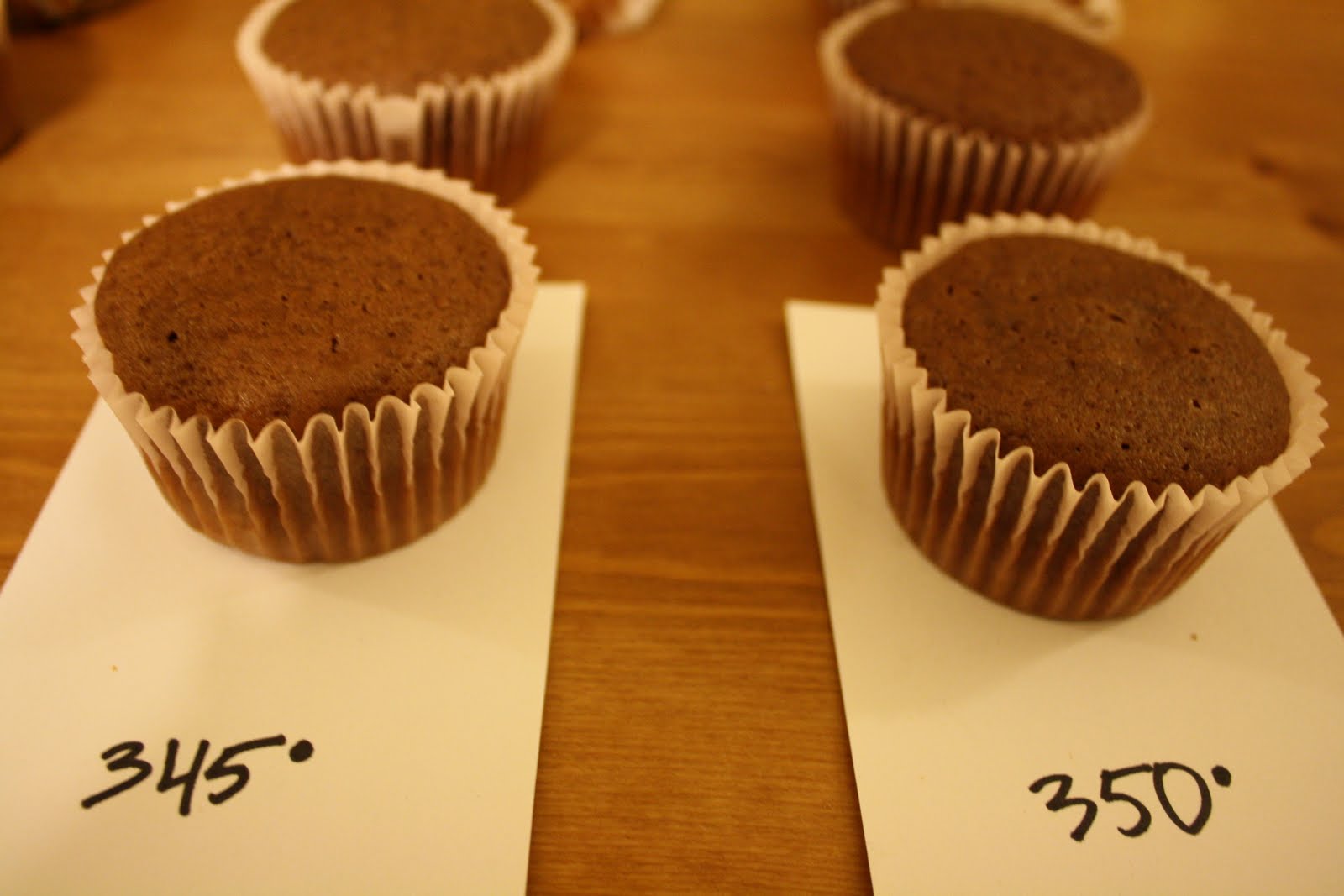 I’ll take the deeper brown as a sign of chocolate cupcakes cooked to perfection. I remember that the vanilla cupcakes, when cooked at previous temperatures, were pale and had a bit of an undercooked look about them. I didn’t realize that chocolate also had an undercooked color!
Well. Cool.

Score, ladies and gentlemen. Score. I will publish the fully-adapted, high-altitude friendly recipe in these next few posts.