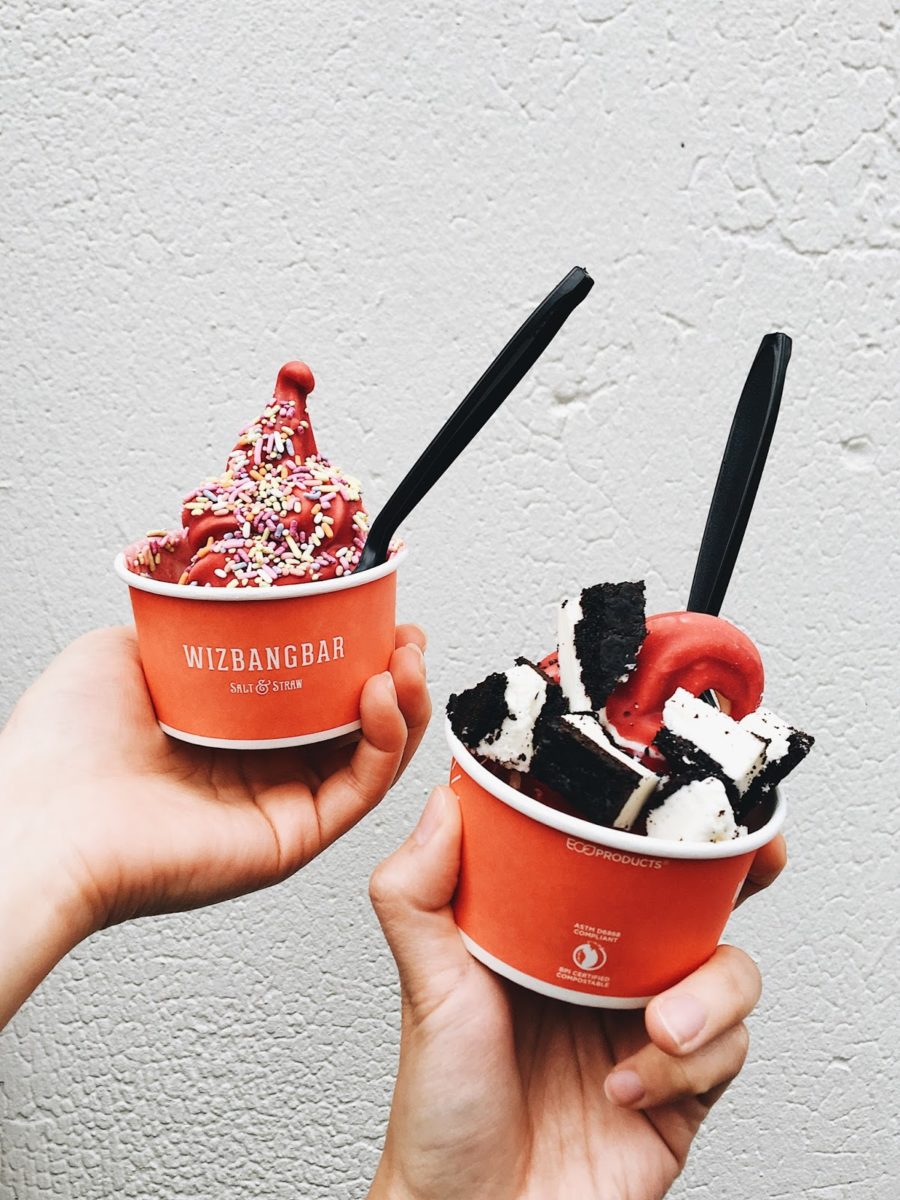 above: softserve sundaes from wiz bang bar Since we moved away from Portland two years ago, I make it a habit to visit as often as I can. One of the patterns that’s emerged is that I tend to visit around February. It’s not the best time to visit Portland, by any means! In fact, […] 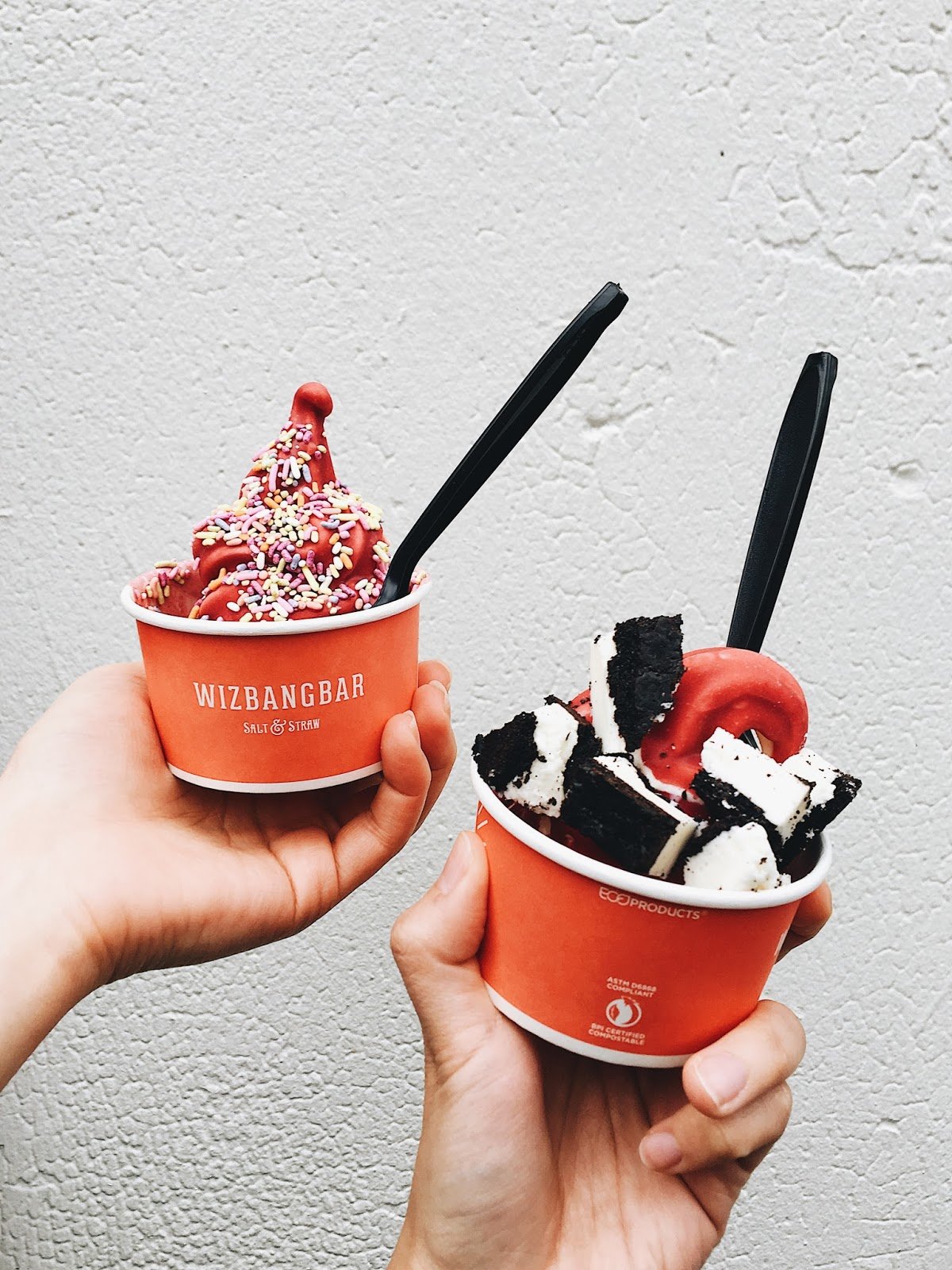 Since we moved away from Portland two years ago, I make it a habit to visit as often as I can. One of the patterns that’s emerged is that I tend to visit around February. It’s not the best time to visit Portland, by any means! In fact, it’s possibly the worst: it’s cold, wet, and everybody’s fat and grumpy from not having seen the sun since September. But I love it anyway — the soggy socks, the rain jackets, and the short days. Because all that is balanced out by the cozy restaurants, the lush greenery, and the nights spent catching up with friends. It all feels like home.

—
What I Ate and Drank
(PS — Pardon the iPhone photos. I was too lazy to lug my monster of a DSLR around!) 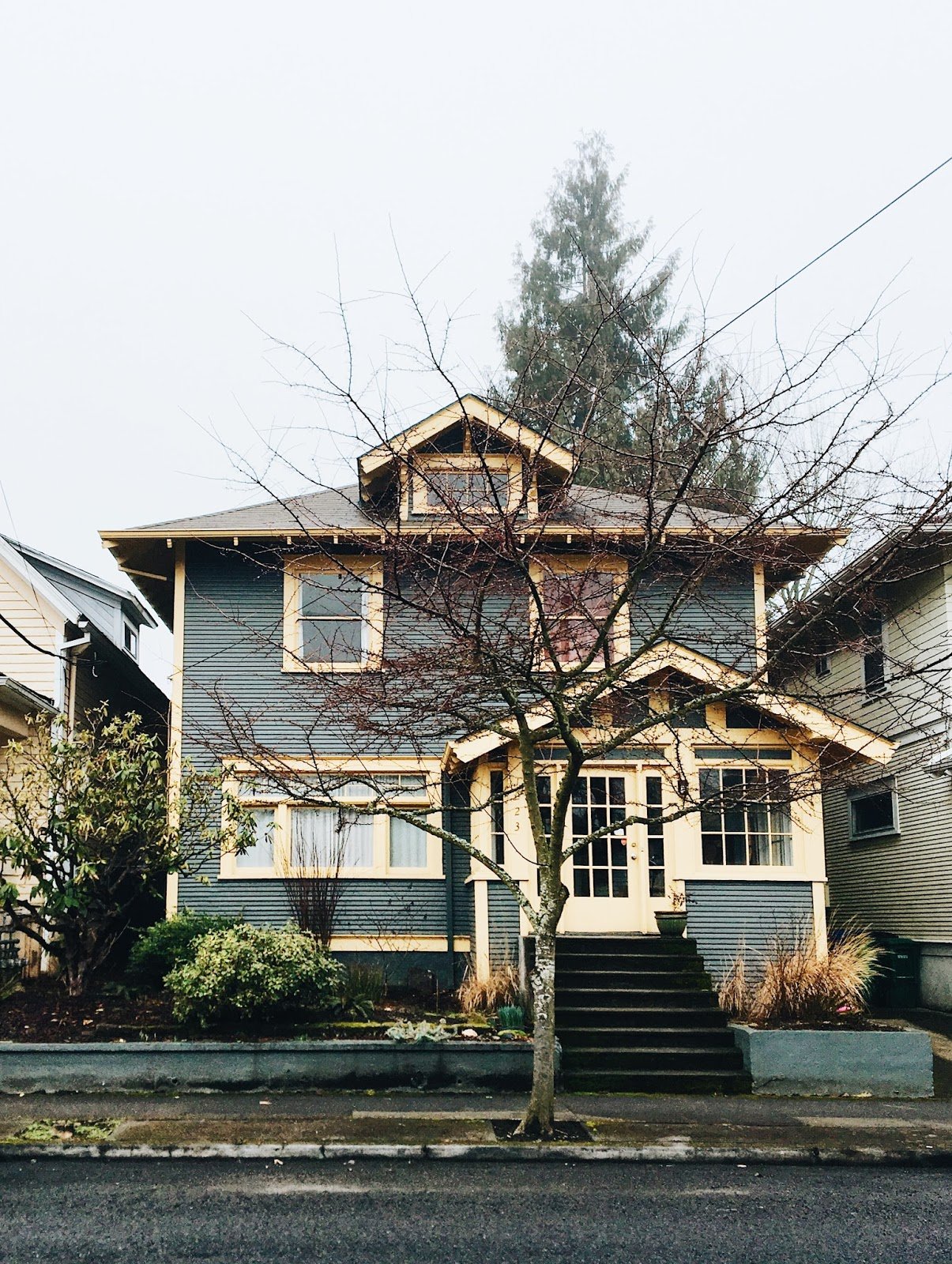 Apizza Scholls
Hawthorne
apizza amore
I know, I know — I can’t believe I ate pizza in Portland, especially given that I have it once a week in the pizza capital of the world. I just wanted to compare how Portland’s best would stack up against my beloved New York favorites. I was pleasantly surprised to find that it held its own! Go Portland.

Burgerville
Multiple Locations
tillamook cheeseburger, fries, chocolate hazelnut shake
Burgerville is the Pacific Northwest’s high-end fast food chain. They use ingredients only sourced from the Pacific Northwest, and have seasonal specials like fried asparagus spears with garlic aioli and chocolate hazelnut shakes made with real Oregon hazelnuts. I always go out of nostalgia and it’s tasty enough, but it actually can’t compete with Shake Shack.

Belmont Station
Southeast Stark
The beer selection here is incredible, and I love how you can get different portions that range from 4 ounces to a full pint. Good alcohol is still really cheap in Portland!

Bless Your Heart Burgers
Downtown Portland at Pine Street Market
A newcomer introducing Martin’s Potato Rolls to Portland! The burgers are not great though; skip this place and go to Little Big Burger instead.

Coquine
Mount Tabor
fritters, hand-made butter, dungeness crab salad, roasted chicken, smoked almond chocolate chip cookie, cardamom and coffee marshmallow
This restaurant opened up after we moved away and is jokingly referred to by local food media as Portland’s grown-up, Michelin-caliber restaurant. It was named one of America’s Best New Restaurants by Bon Appetit in 2016 and has a handful of James Beard nods. It’s good but I think I’m just numb to fine dining because I almost thought it was a little… boring? Controversial, I know. Soweeeeee. 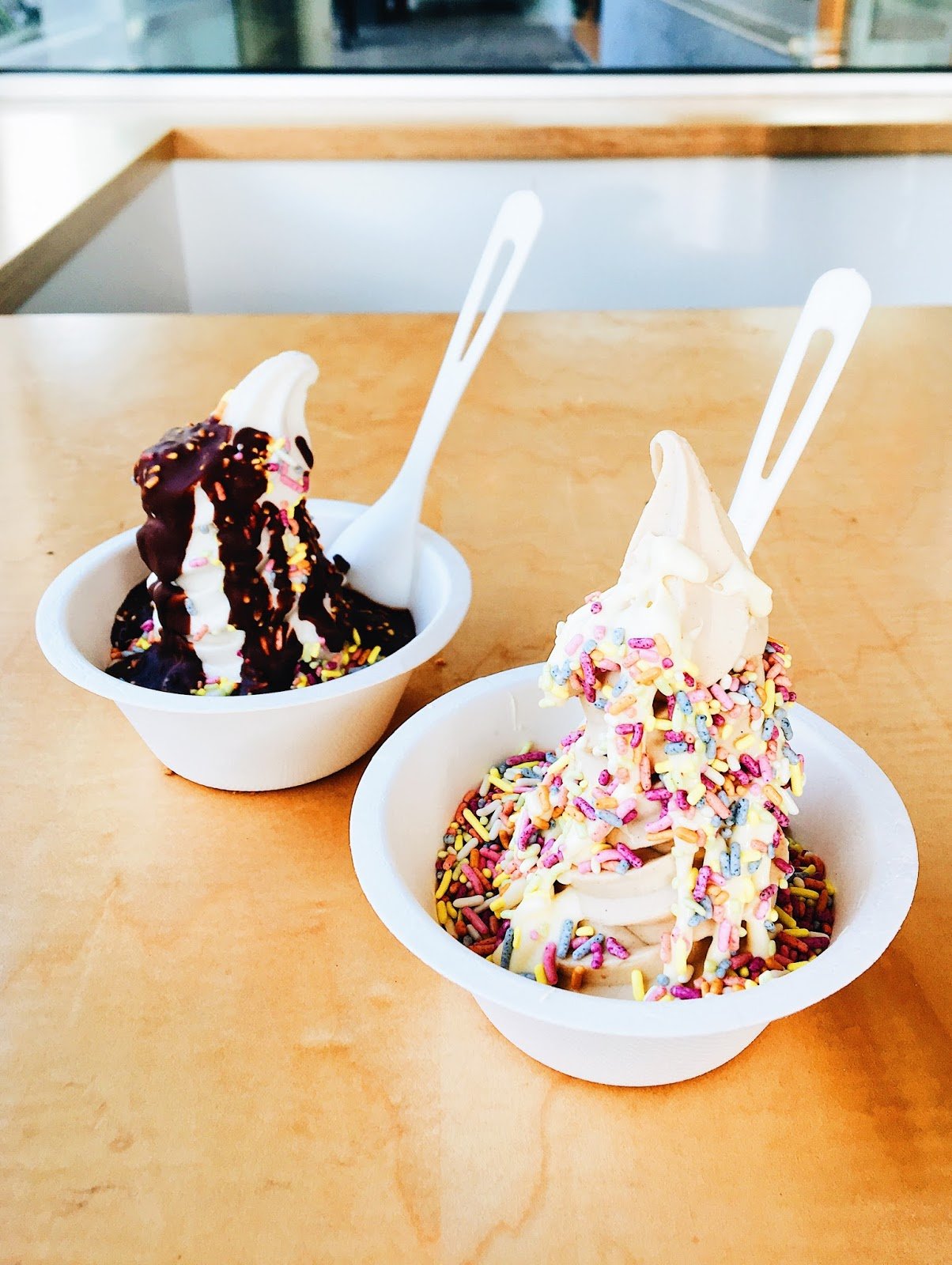 above: froyo from eb & bean

Eb & Bean
Division-Clinton
marionberry pomegranate som frozen yogurt with dark chocolate magic shell and sprinkles, vanilla custard with nutella magic shell and sprinkles
Eb & Bean was around when I lived in Portland, but they opened up a new location a few blocks from my house and I am beyond excited! Current Plan: go here everyday when we move back, get really fat. 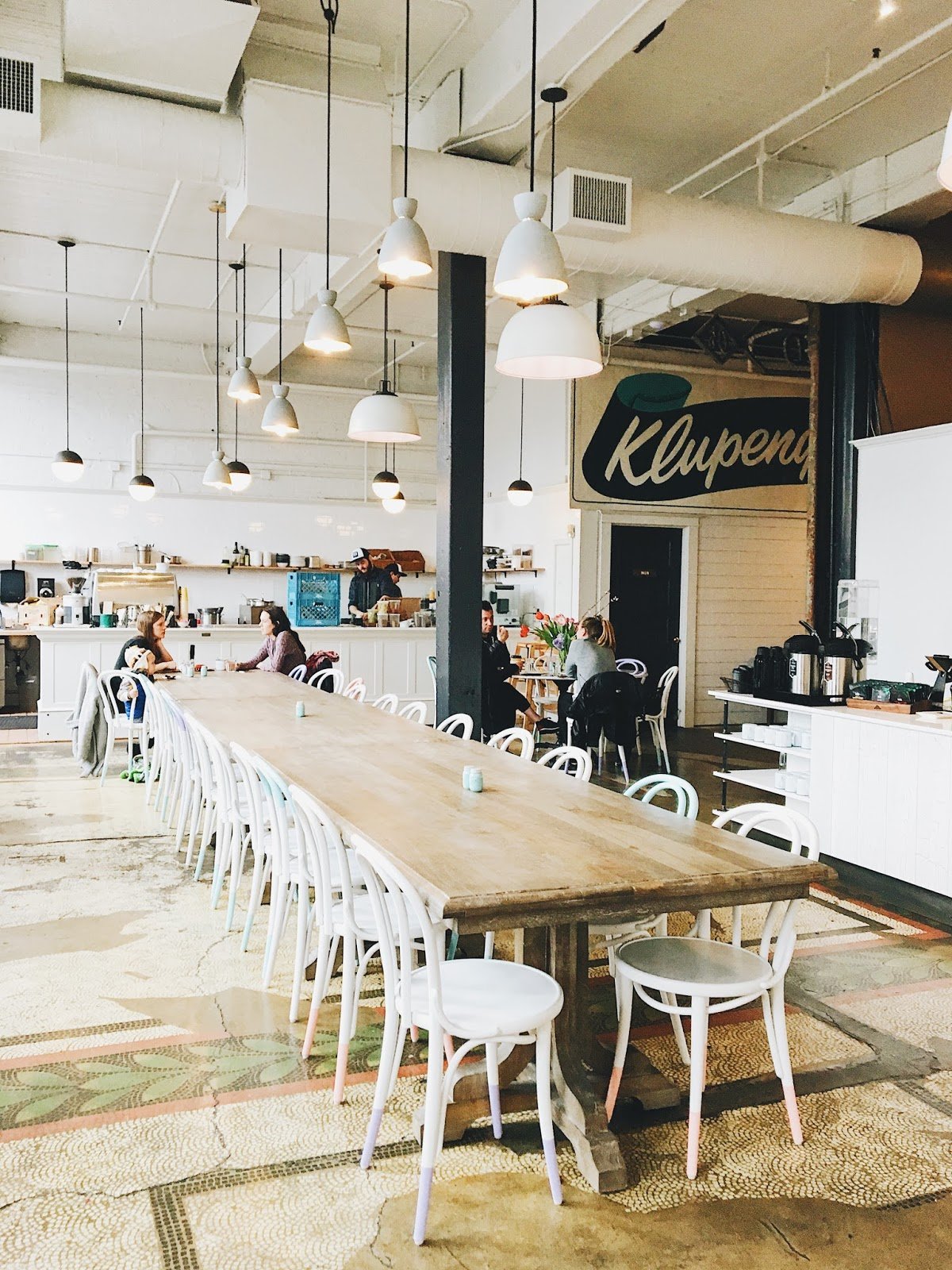 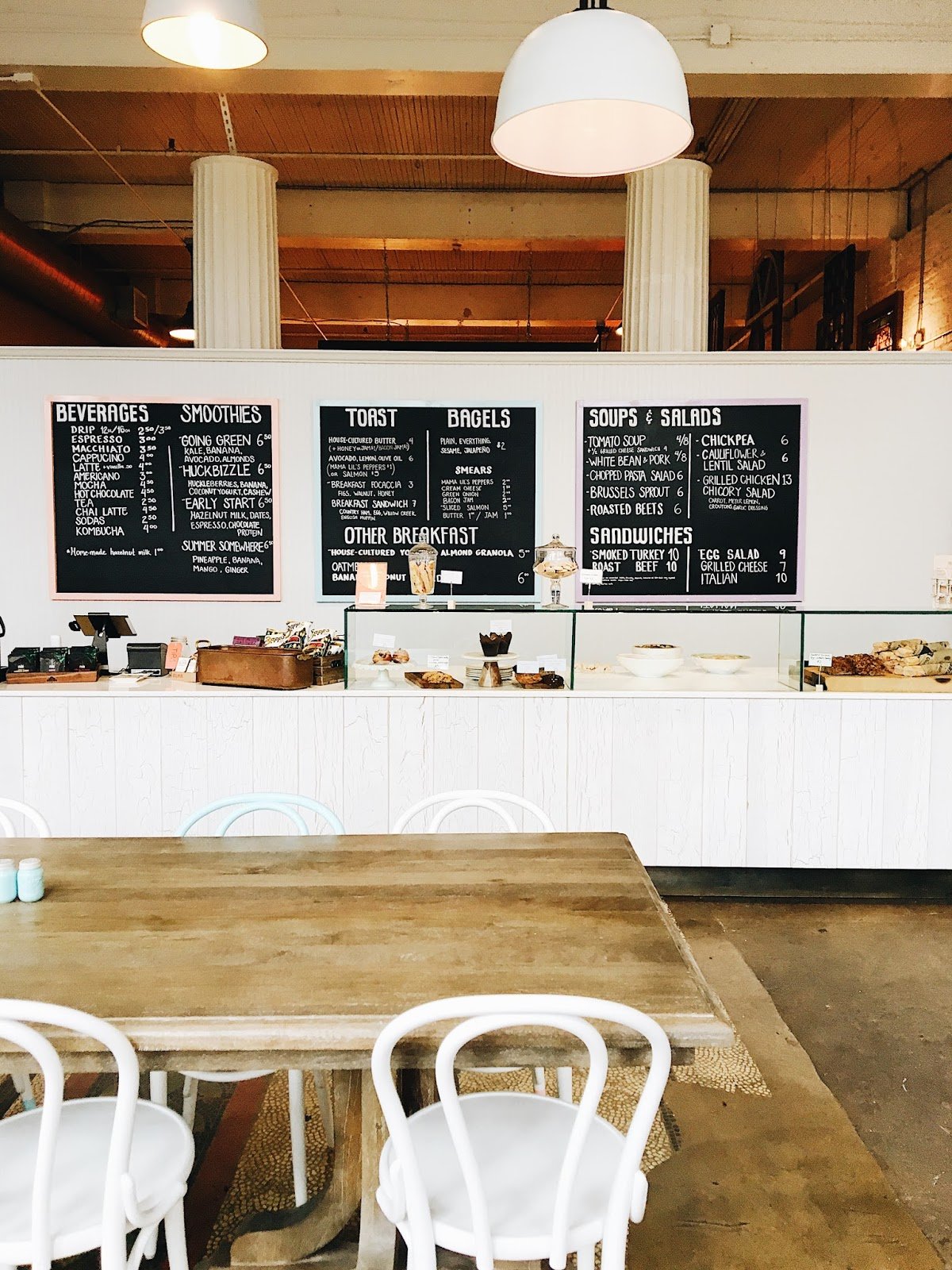 Figlia
Southeast Industrial District
avocado toast, latte
This cafe is fairly new and is located within one of my favorite stores in the city, Rejuvenation (and also a sponsor of Hummingbird High!). It’s so freaking adorable; I considered going back multiple times, despite having only a limited amount of time to spend in Portland.

Garden Bar
The Pearl
a custom salad that they screwed up
These folks are gunning to be the sweetgreen/Chop’t of Portland. It’s fine. We all know I’m betrothed to sweetgreen, so I can’t say anything nice about this place.

Henry Higgens Boiled Bagels
Foster
onion bagel with scallion cream cheese
Not bad for a West Coast bagel, but a little on the small side. And it’s still no New York bagel.

Killer Burger
Hollywood
killer burger
This divey burger bar used to be one of my favorite places in Portland (not alone on this one — it was one of Carrie Brownstein’s regular spots too!). I think Shake Shack has corrupted me forever and ever though. I didn’t enjoy it as much as I used to, and I am actually very sad about it. 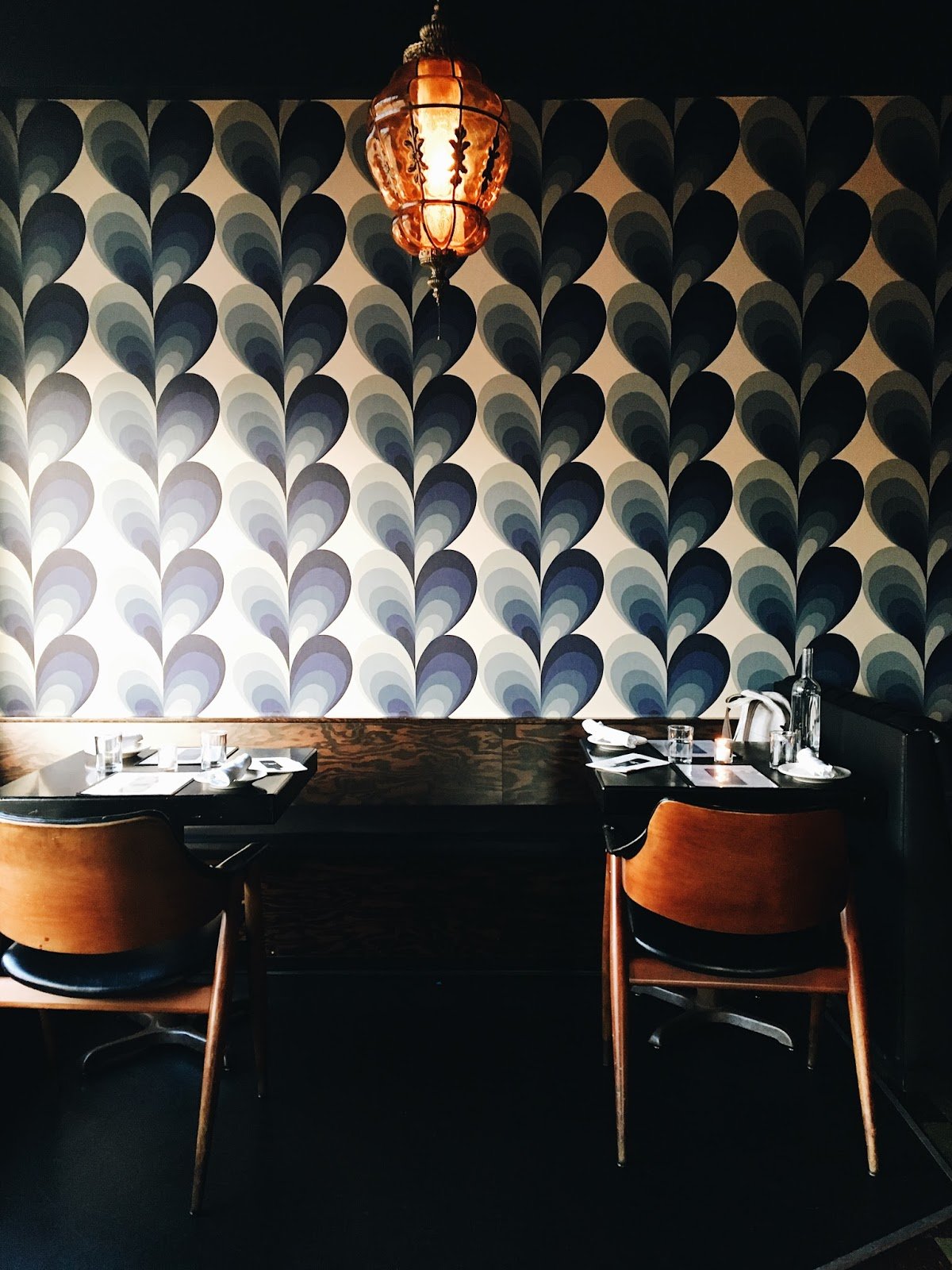 Little Big Burger
Multiple Locations
cheeseburger, truffle fries
This is probably now my favorite burger in Portland. Their sriracha ketchup is SO addicting. 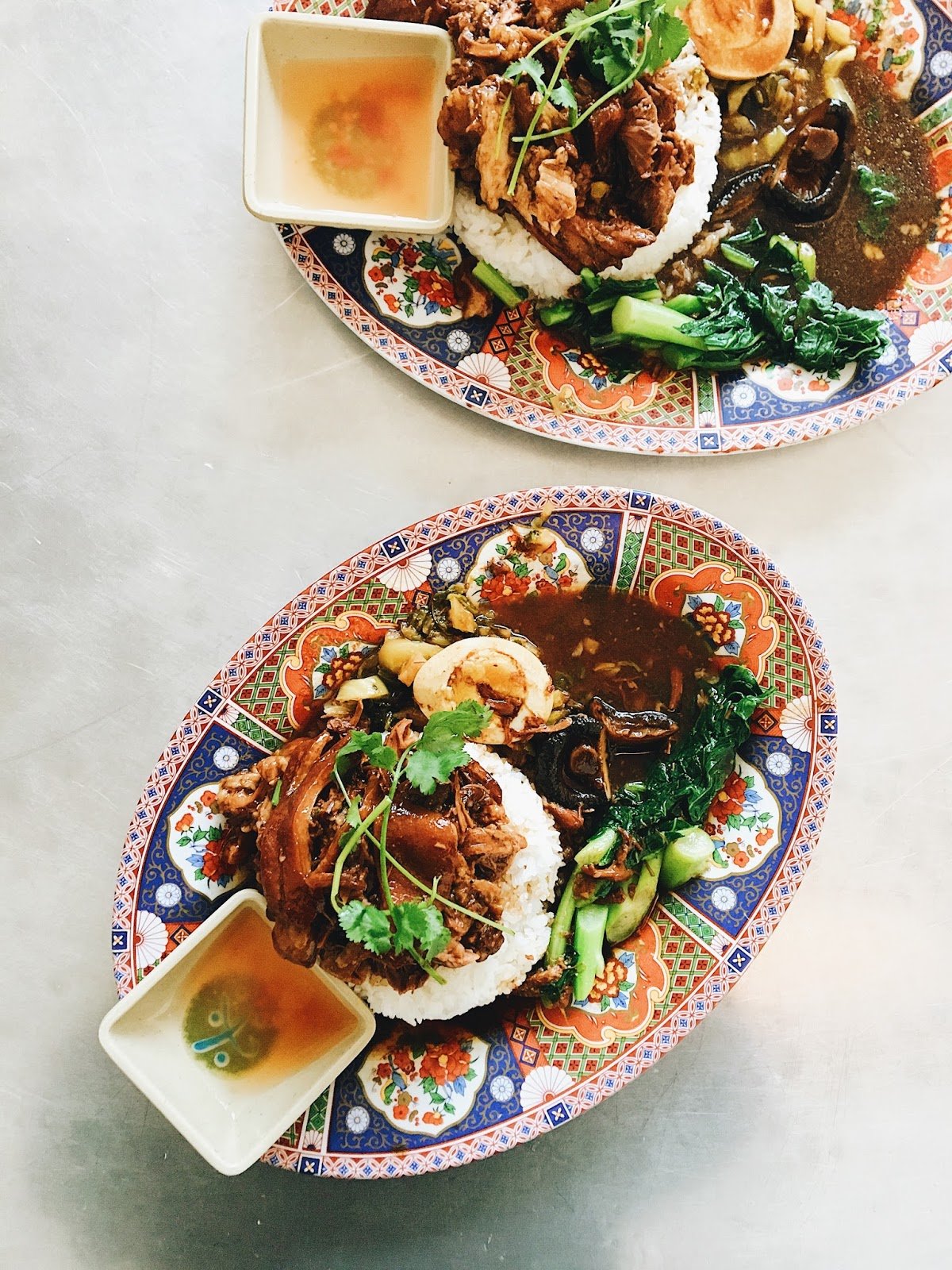 Nuvrei
The Pearl
rose croissant, chocolate almond croissant, lemon sable, double chocolate cookie
This is my favorite bakery in Portland, if not one of my favorite bakeries ever in the whole wide world. I’m not exaggerating. Their laminated dough is unparalleled with any that I’ve had, even when compared to renowned places in New York City. Services can be snotty and a little slow, but in general, I daydream about their pastries.

Poke Mon
Hawthorne
garlic salmon poke
I like this place, but I am no Alana Kysar so I don’t know if my opinions on poke are legitimate. 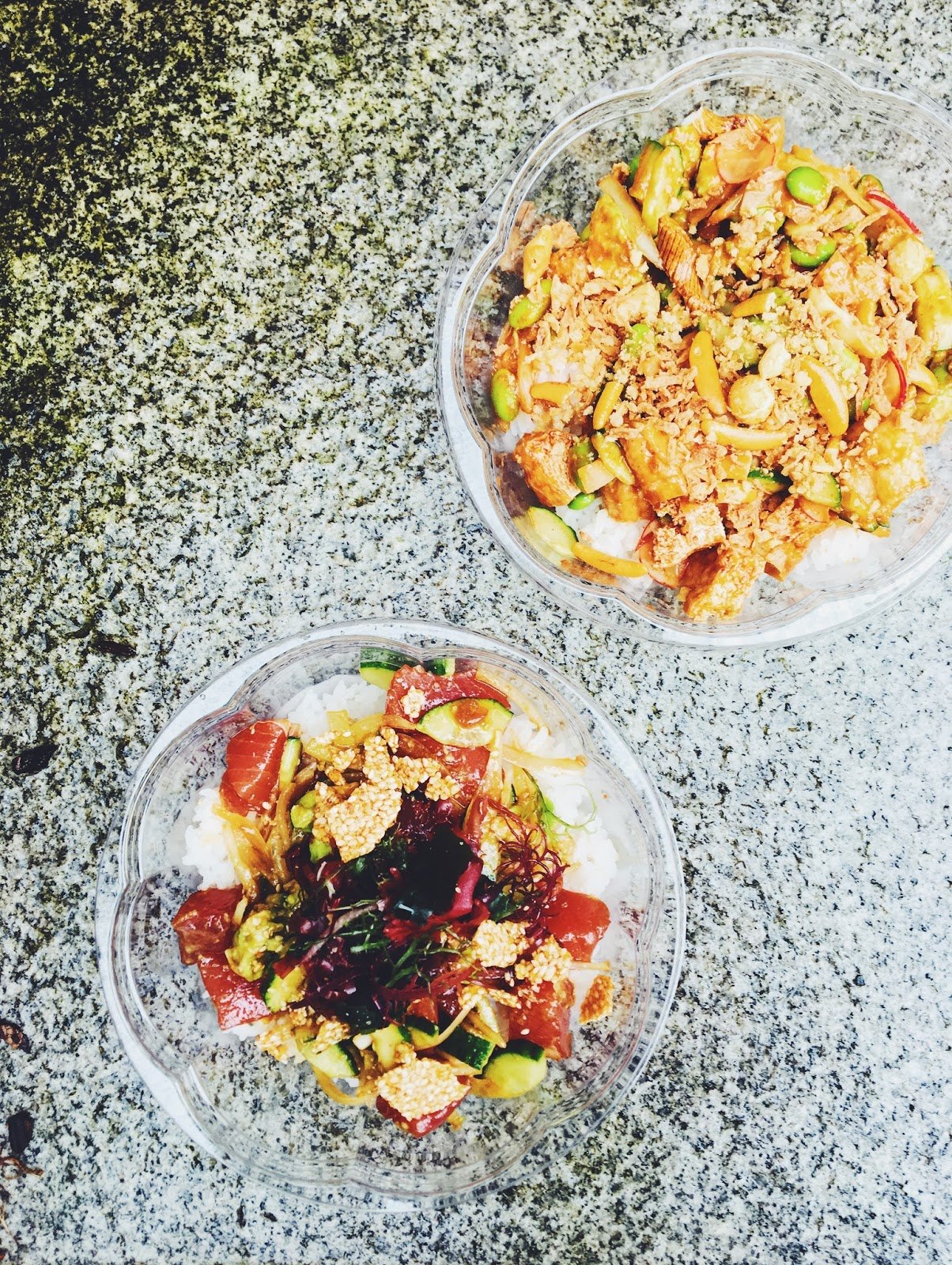 Quickfish Poke Bar
Central Southwest
island bowl
Quickfish is the poke bar of Bamboo Sushi, the country’s first certified sustainable sushi restaurant (how Portland, I know). Again, I’m no Alana Kysar, so I don’t know if the addition of sesame brittle to poke is blasphemous or what. But I dug it.

Roman Candle Baking Company
Division-Clinton
steamed duck egg on an everything bun, hashbrown
One of my favorite breakfasts in the entire city!

Saint Cupcake
Multiple Locations
big top cupcake, chocolate with buttercream frosting cupcake
This is the baker that made me fall in love with cream cheese frosting. Their vanilla and chocolate cake bases are classically delicious and are the very model of what cupcakes should be.

Superbite
Central Southwest
salmon crudo bite, dungeness crab bite, grilled shiitake bite, ocean scallops
This was a fun little place! From the famed couple behind Ox, it’s a really interesting and original concept that focuses on, well, literally superbites of food packed with a ton of flavor and ingredients. 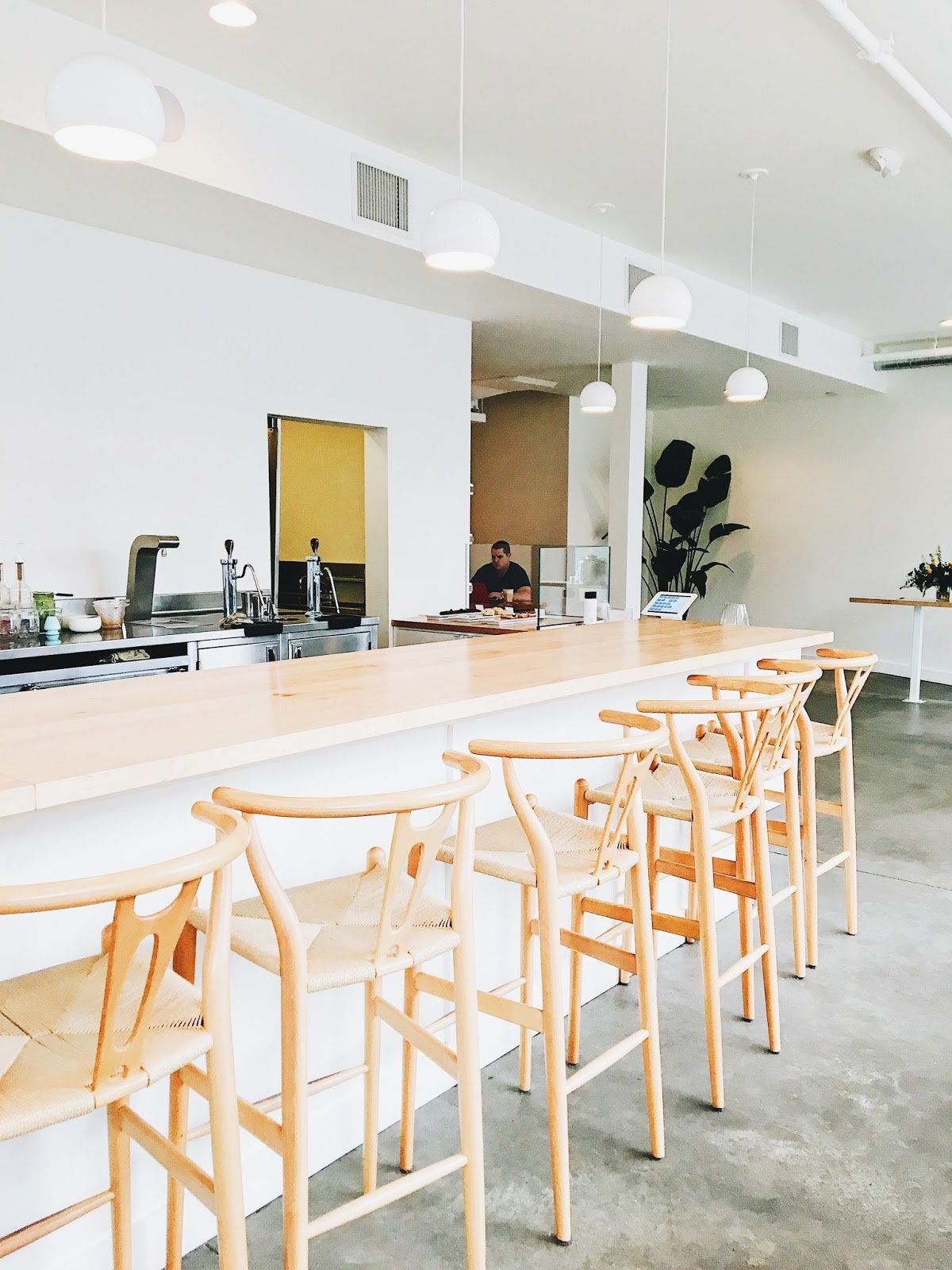 above: tea bar on southeast division, looking so fresh and so clean

Tea Bar
Multiple Locations
One of my favorites in the city; their tea lattes are perfect.

Trifecta Tavern
Southeast Industrial District
ham and hot rolls, bread and butter, roasted brussels sprouts, crispy pork shank, fried chicken in dashi
Their bar program here is out of control! The menu is pretty large, but sit at the bar and let the bartender guide you. He’ll do no wrong. Also, get the bread and butter. Everything’s good, especially if you’re into smoky, wood-fired flavors.

Urdaneta
Alberta
Another fun, newish place! Tapas — all extremely buttery and flavorful — in a cosy, warm environment. I unfortunately don’t remember all that we ordered, but I do know that it was delicious. 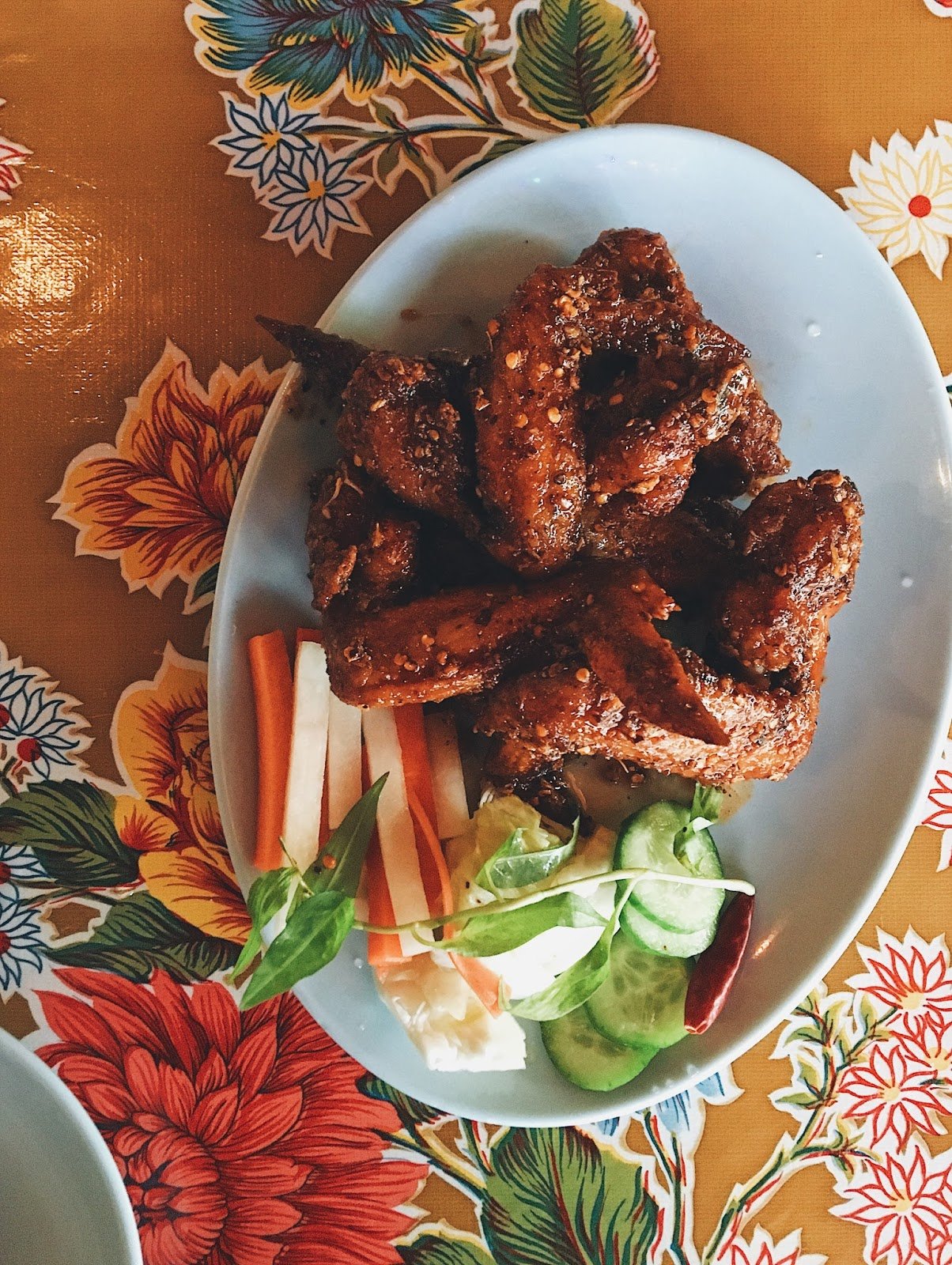 Wiz Bang Bar
Downtown Portland at Pine Street Market
malted vanilla with black raspberry shell and homemade oreos
Honestly this is the best. Their magic shell situation is out of control.