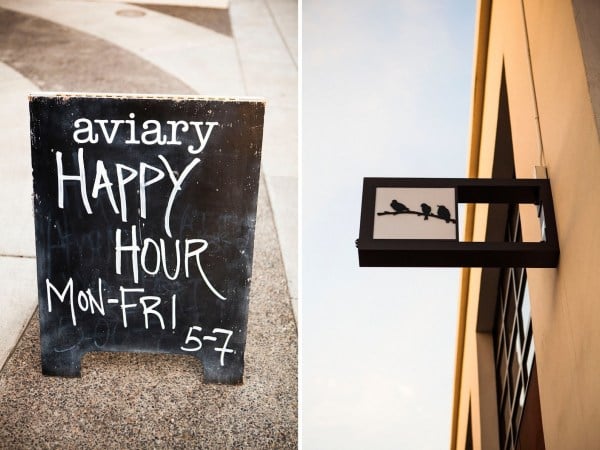 A few nights ago, I had the pleasure of attending a Portland Food Bloggers’ Happy Hour at Aviary, one of my favorite restaurants in town. In addition to spending the evening with local food bloggers and some of my favorite people from Little Green Pickle (the awesome PR firm that hosted the event), we were […] 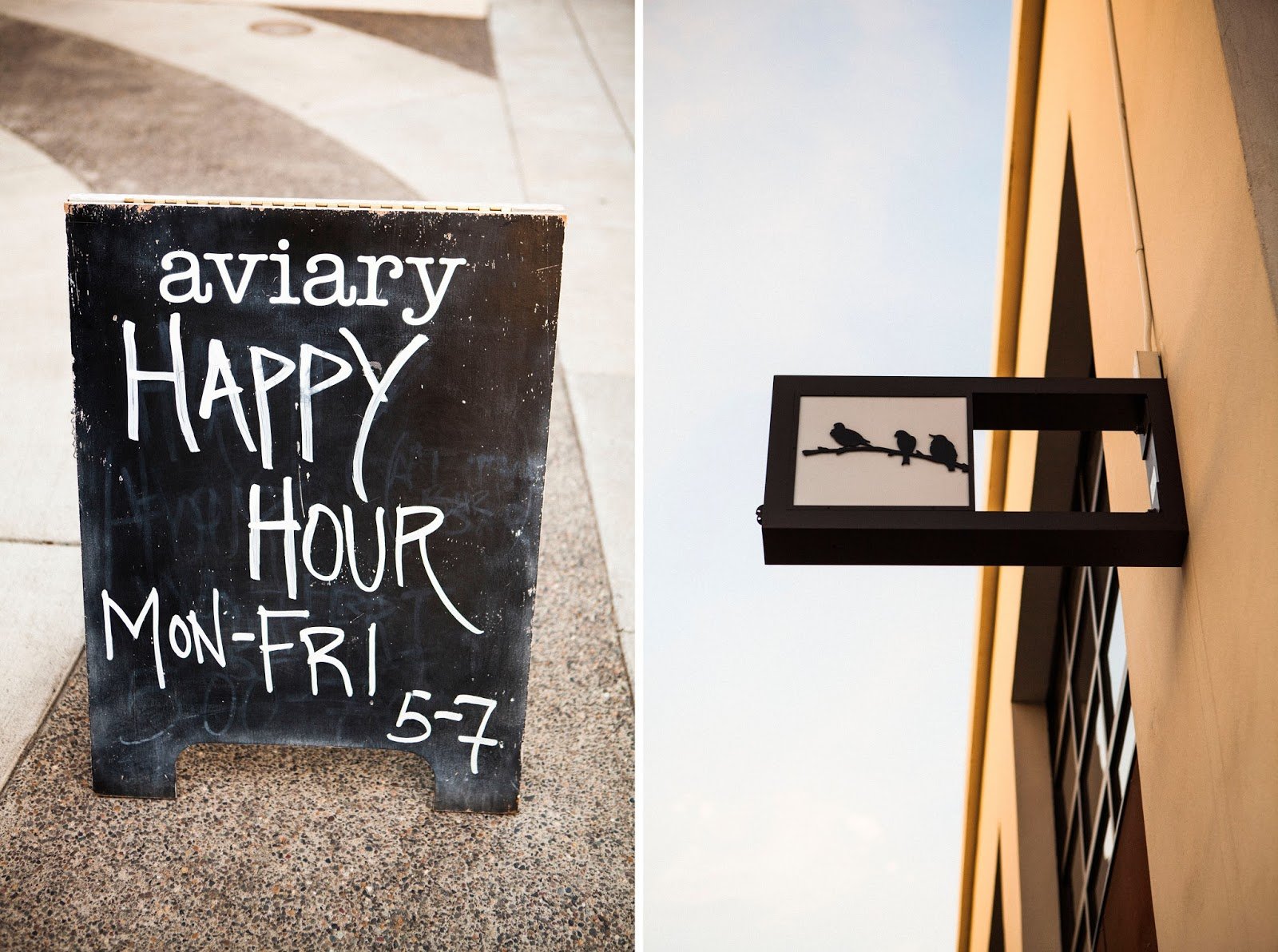 A few nights ago, I had the pleasure of attending a Portland Food Bloggers’ Happy Hour at Aviary, one of my favorite restaurants in town. In addition to spending the evening with local food bloggers and some of my favorite people from Little Green Pickle (the awesome PR firm that hosted the event), we were lucky enough to get a quick cocktail making demo from Aviary’s famed barman, Ross Hunsinger: 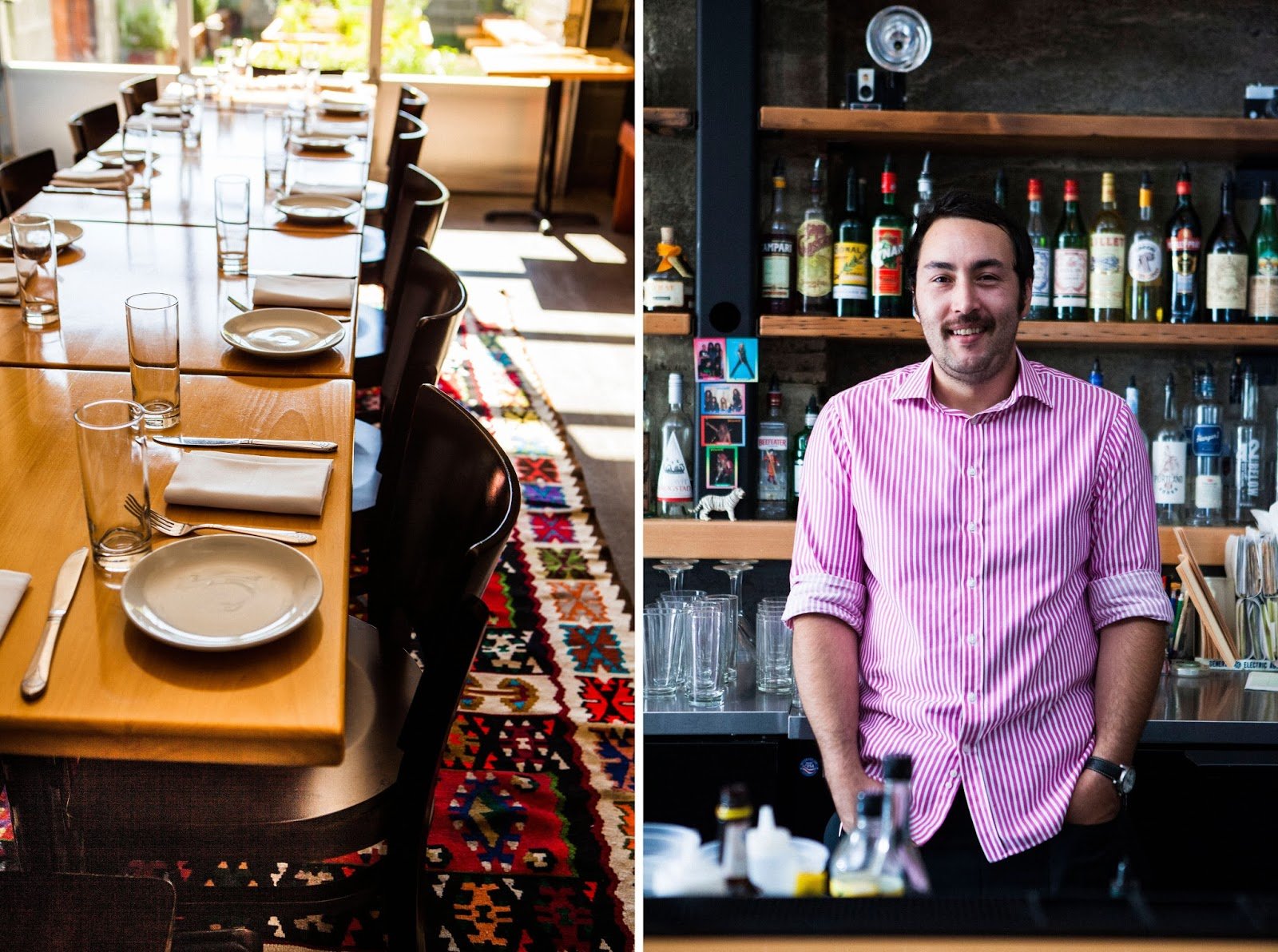 Ross makes some of my favorite cocktails in town, creating a bar menu that “mixes classic and modern flavors with seasonal infusions from the kitchen”. I’ll just let the pictures do the talking: 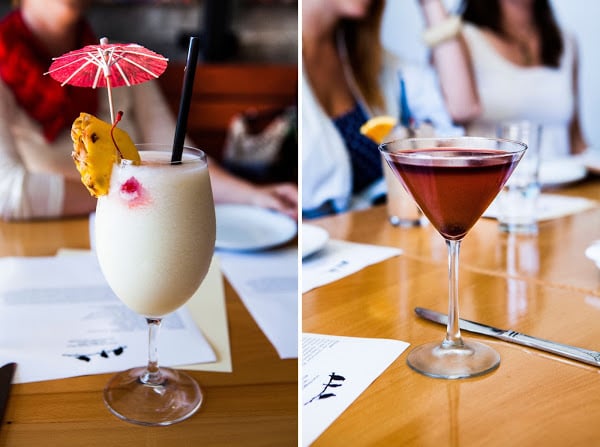 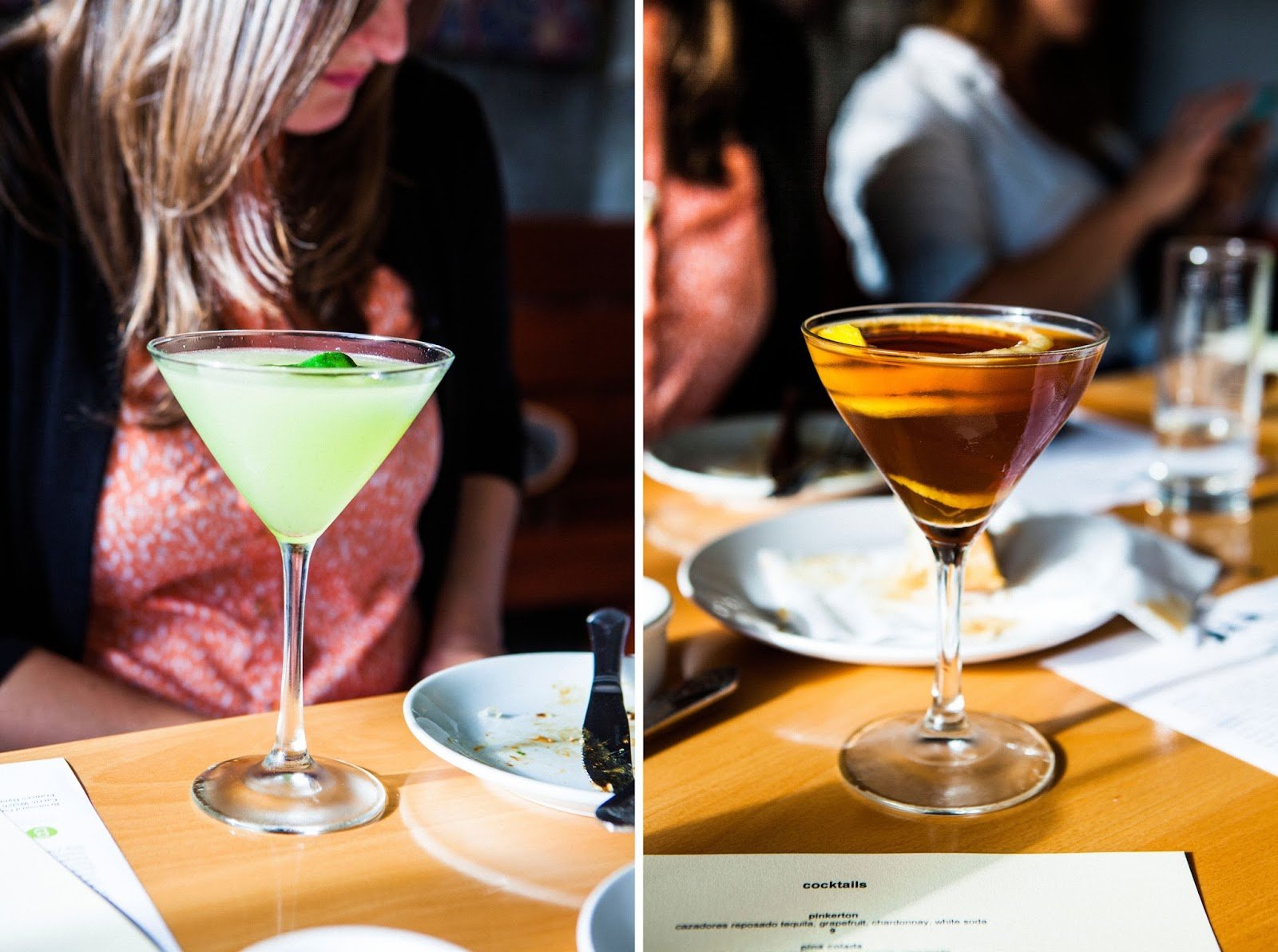 Clockwise from the top left:

A pina colada (my first drink) with 10 cane rum, coconut, and pineapple.

The “One Night in Bangkok” (Oh, how that song was stuck in my head for several days afterwards. What an old school reference, I know.) with vodka, kafir leaves, lemongrass and lime. This was one of my favorite drinks since it was super refreshing during the fairly warm evening.

And I’m notttt really sure what the last drink is — I don’t think it was on their menu. I think Ross might have made it especially for Frances (one of the LGPers) and had used some of his yet-to-be-launched hemp bitters.

And here were the other half of the table’s drinks: 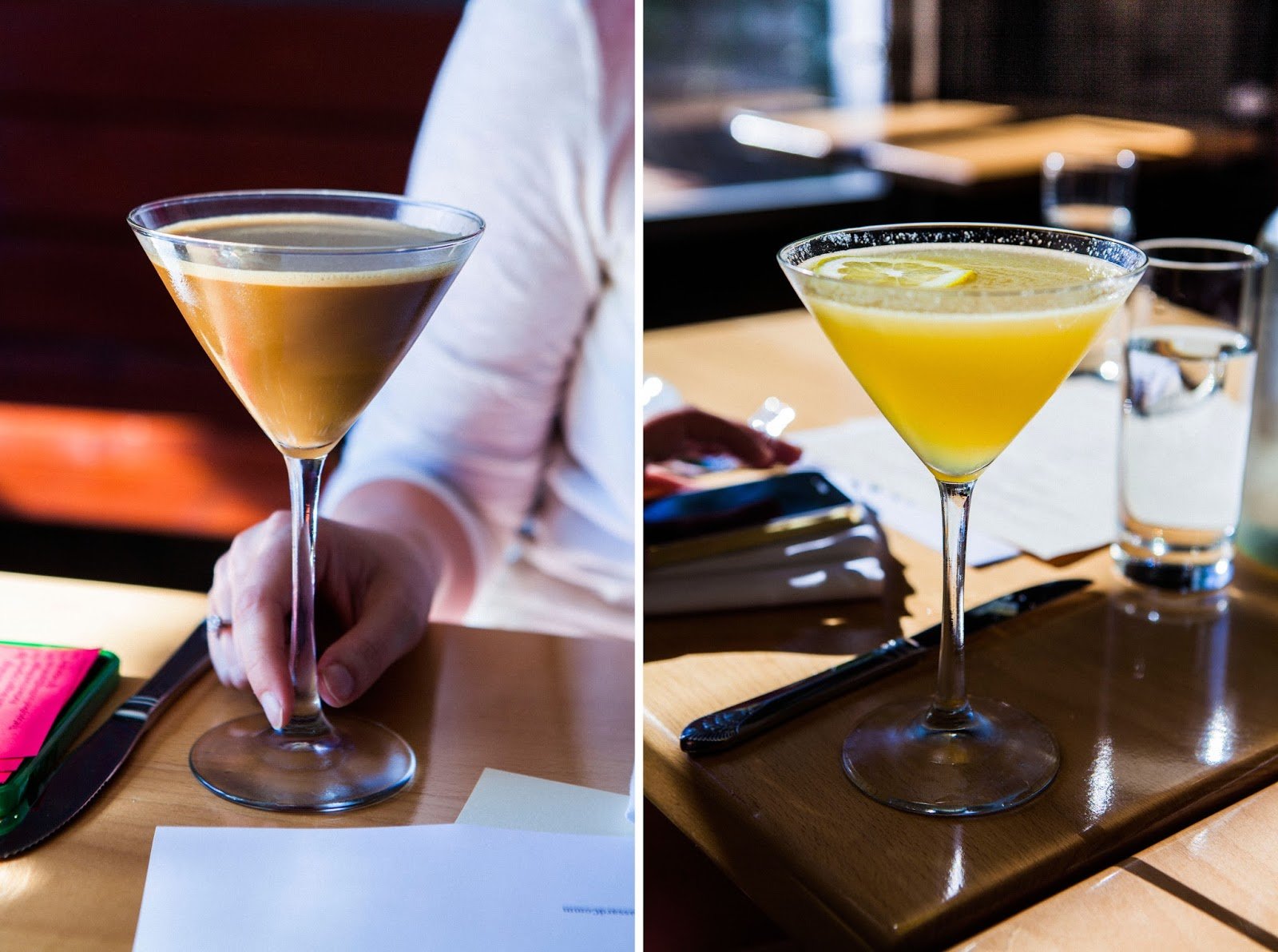 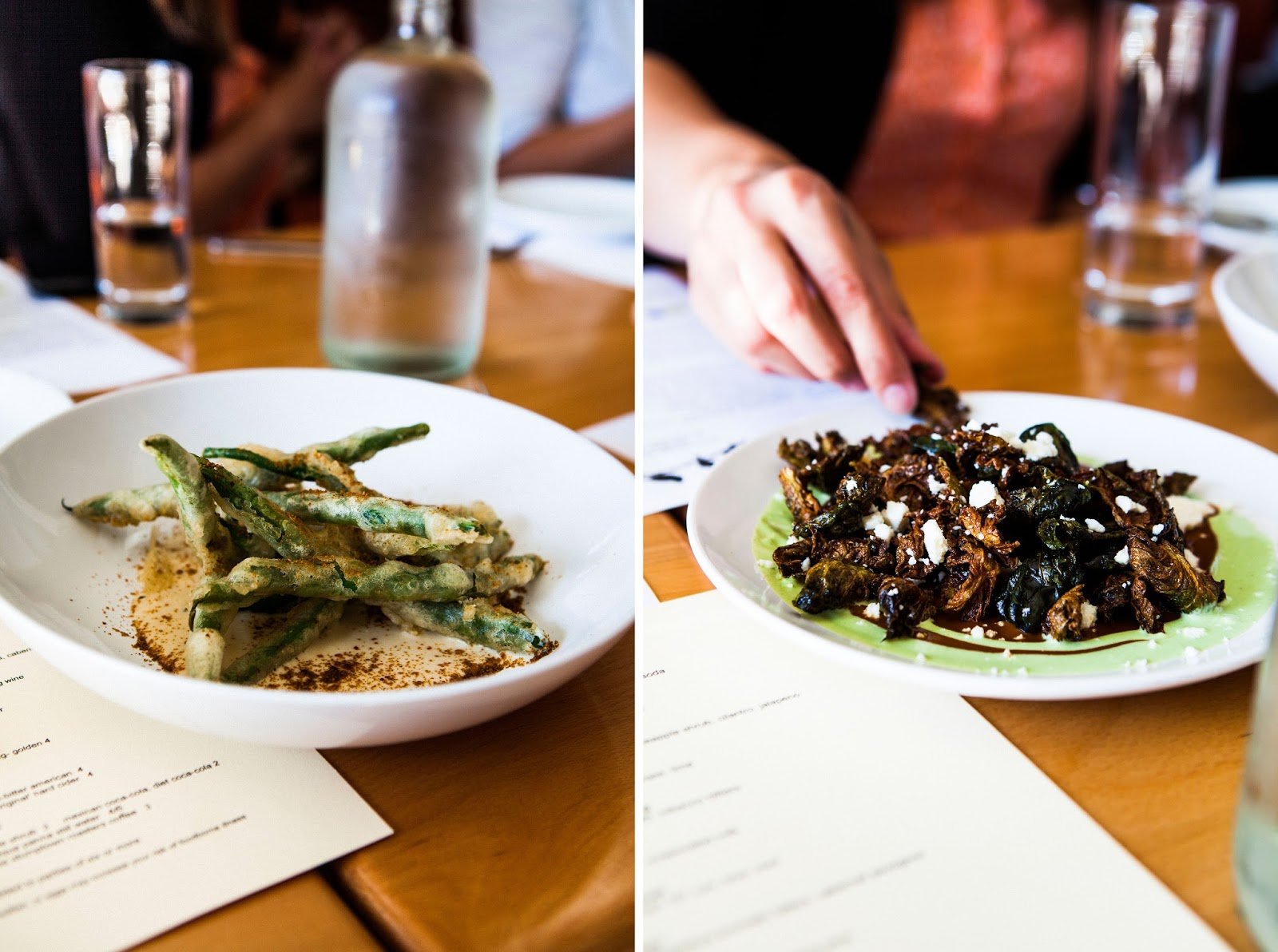 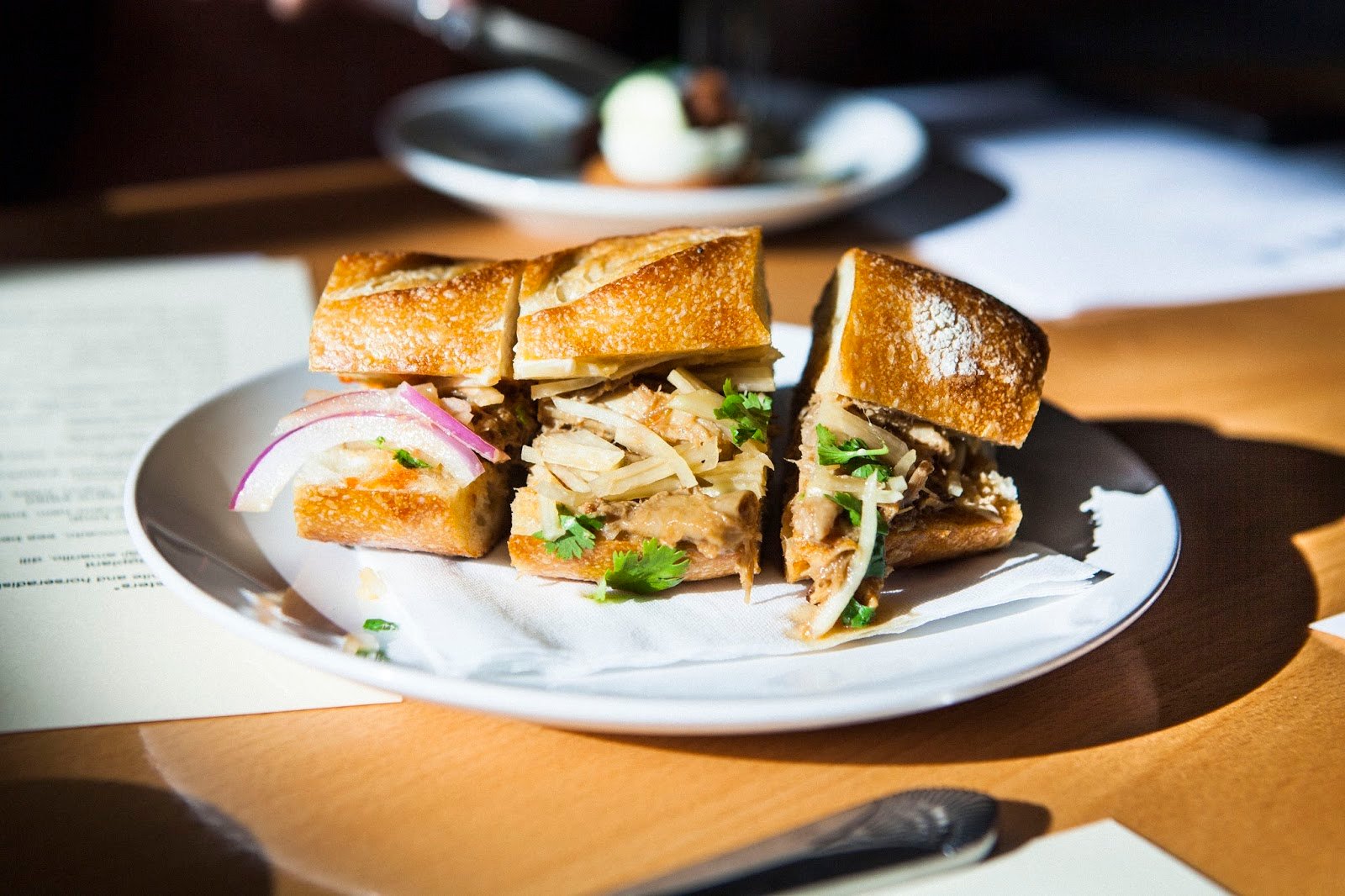 The drinks, from the top left:

The “High and Low” with bourbon, cold brew coffee, and milk — according to Ross, this drink will keep you awake for the next 16 hours. Consider yourself warned. Small price to pay for a delicious drink, in my opinion.

The “Opera Sidecar” with pear bandy, tuaca, and house sour.

The eats, clockwise from the left:

Tempura green beans, brussel sprout nachos, and some incredibly pulled pork sliders that tasted a hell of a lot like bahn mi — and I mean that in a very good way. The menu at Aviary apparently applies French techniques to traditional Asian flavors/dishes, creating an incredible fusion between the two cuisines. I could definitely taste that from those dishes I listed above.

We also had oysters, trotters, japanese eggplant, and bread that I didn’t manage to take pictures of since I was too busy stuffing my face. Almost all the dishes that we sampled are available on Aviary’s Happy Hour menu, with the most expensive dish being a mere six dollars! Quite the deal in this town, especially considering the high quality of ingredients.

After our meal, Ross gave us a quick demonstration of how to make the Brix Layer, Aviary’s most popular cocktail drink: 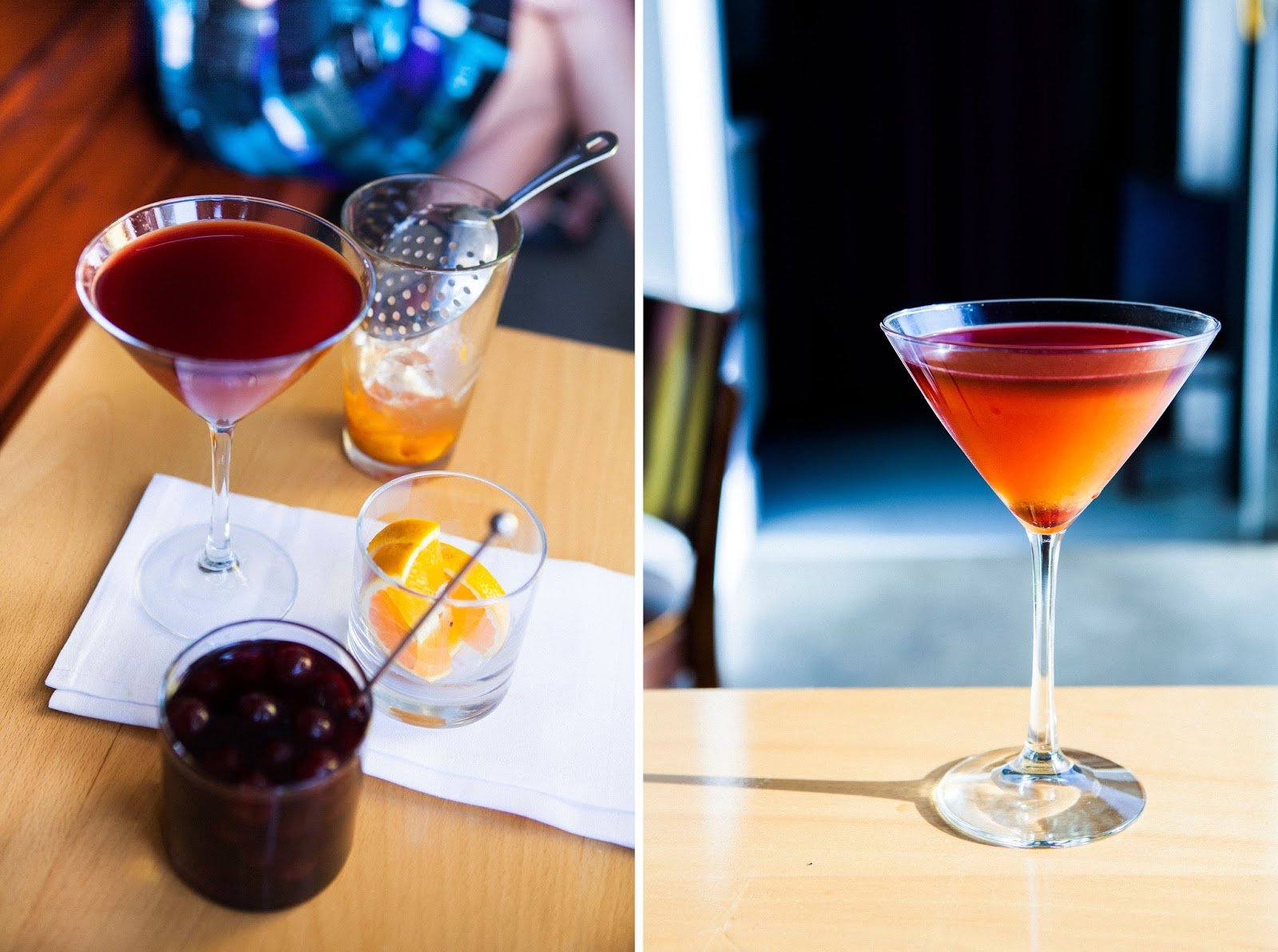 Again, the Brix Layer is made from Buffalo Trace bourbon, housemade sour, cherry, orange, bitters, and cabernet. Apparently Aviary goes through a crazy ton of Buffalo Trace bourbon each month because the drink is so popular. And of course it is — look at those beautiful layers! I believe the bottom-red layer is a cherry, while the top-red layer is a splash of cabernet. Don’t quote me on that though, because I was on my second pina colada at that point and things were starting to get fuzzy 😉

Afterwards, Marisa from Margaritas in the Rain and I chatted with Ross for a little bit at the bar. Well, more like Marisa and Ross caught up (They’re old-time good friends — he even once made a drink in her honor. Was it called the “Rainy Margarita”? Marisa, correct me if I’m wrong because I was definitely drunk at that point) as I took pictures of him making drinks:

Like my gif up top? It’s my first time making one of those, so I feel quite proud of myself. Okay, yes, yes, admittedly it wasn’t too taxing and I just used one of those free gif-making sites, but still. Be proud of me!

My gif-making skills aside, Ross is a super chill and easygoing dude. Fun facts about him? The vintage cameras that line the top shelf of the bar are his and were mostly found at thrift stores and Goodwill — apparently he’s a photographer himself and even has a dark room in his house! He once had the idea of leaving the cameras around the bar and having patrons take pictures that he would then develop… until he realized that the risk of somebody breaking/walking out with one his cameras was too great. He’ll also be launching his own artisanal soda line, Atlas Sodaworks (soon to be available at Salt & Straw, the hottest ice cream parlor in town).

Oh yeah, in case you haven’t figured it out yet, he makes a pretty mean drink: 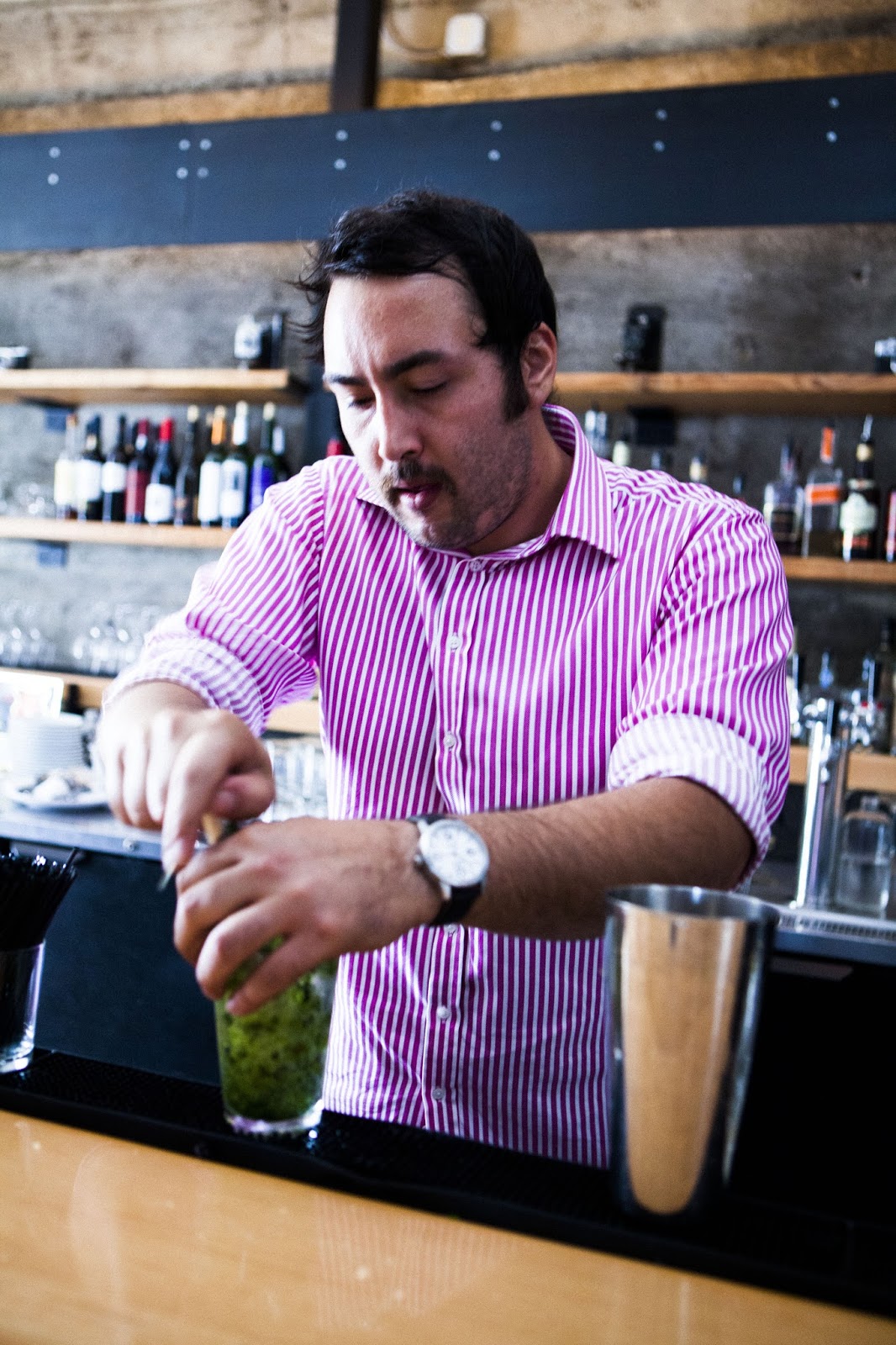 There he is, hard at work… 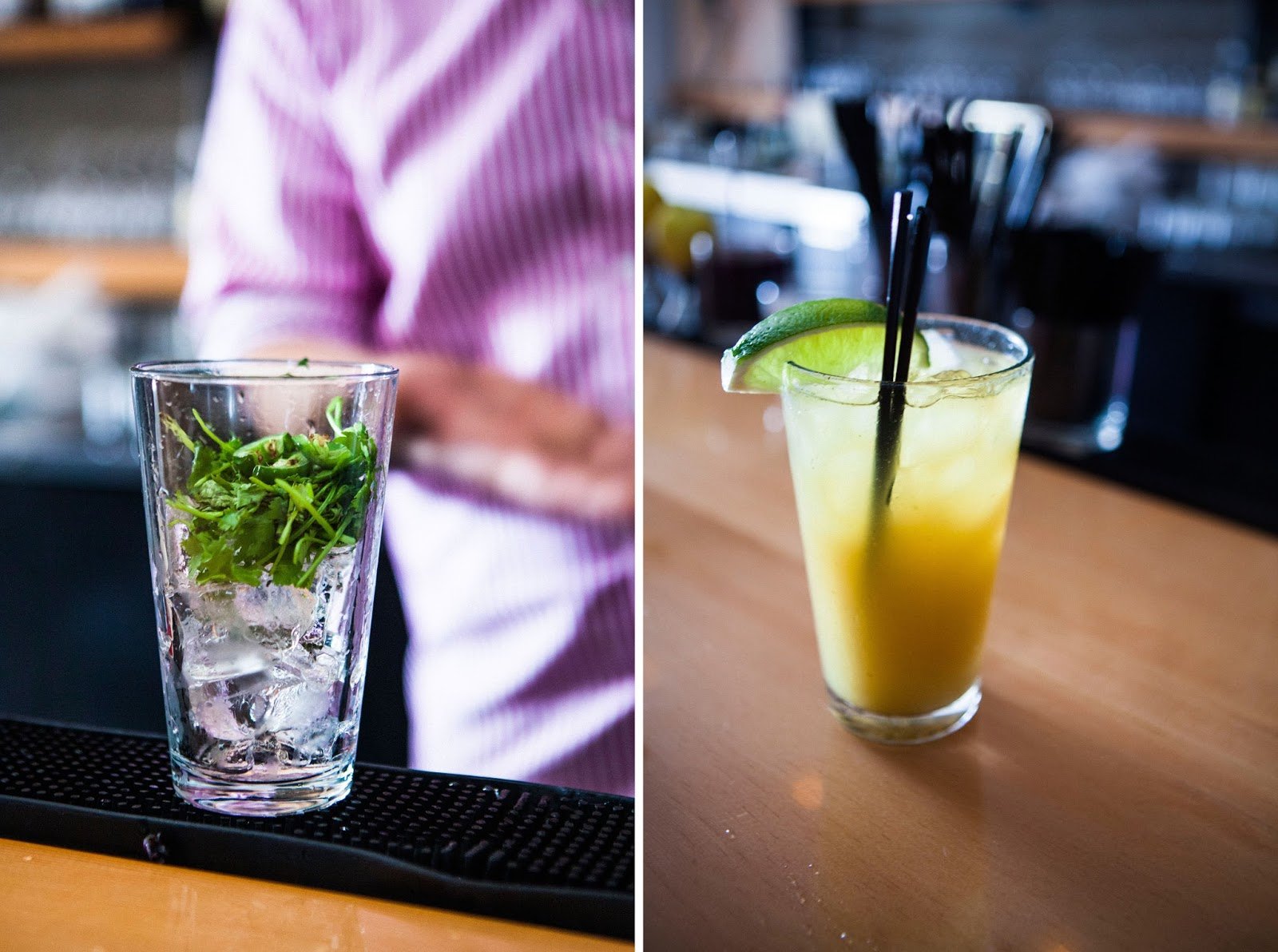 And BAM! A cool, refreshing alcoholic beverage perfect for the warm summer’s day. I think this might be the “Milkplus Velocet”, with cantaloupe, sake, rum, lime, and mint. Tasted like a complex, fruity margarita. Mmm, mmm, mmm.