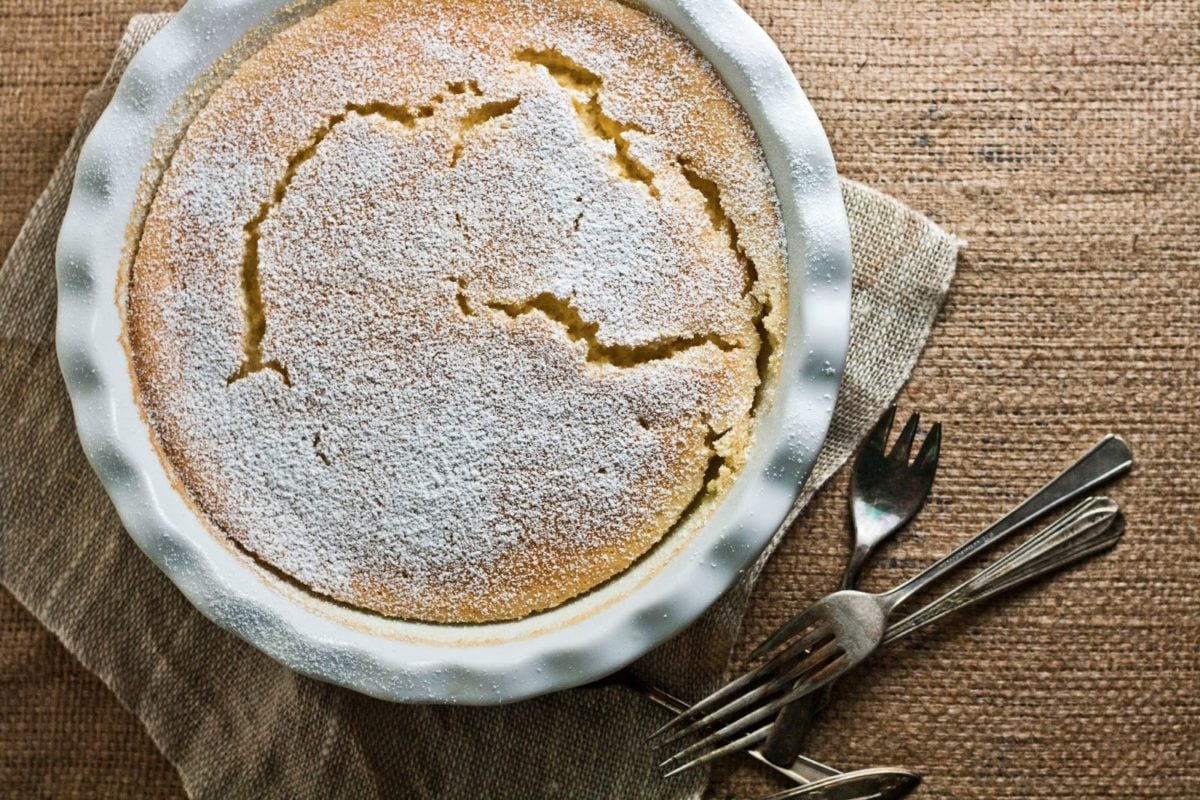 A few weeks ago, I panicked when I saw that meyer lemons were on sale at my local fancypants grocery store. Produce on sale usually means that the season is coming to a close. Shame on me since I still hadn’t posted any recipes that took advantage of meyer lemon season! The meyer lemons in front […] 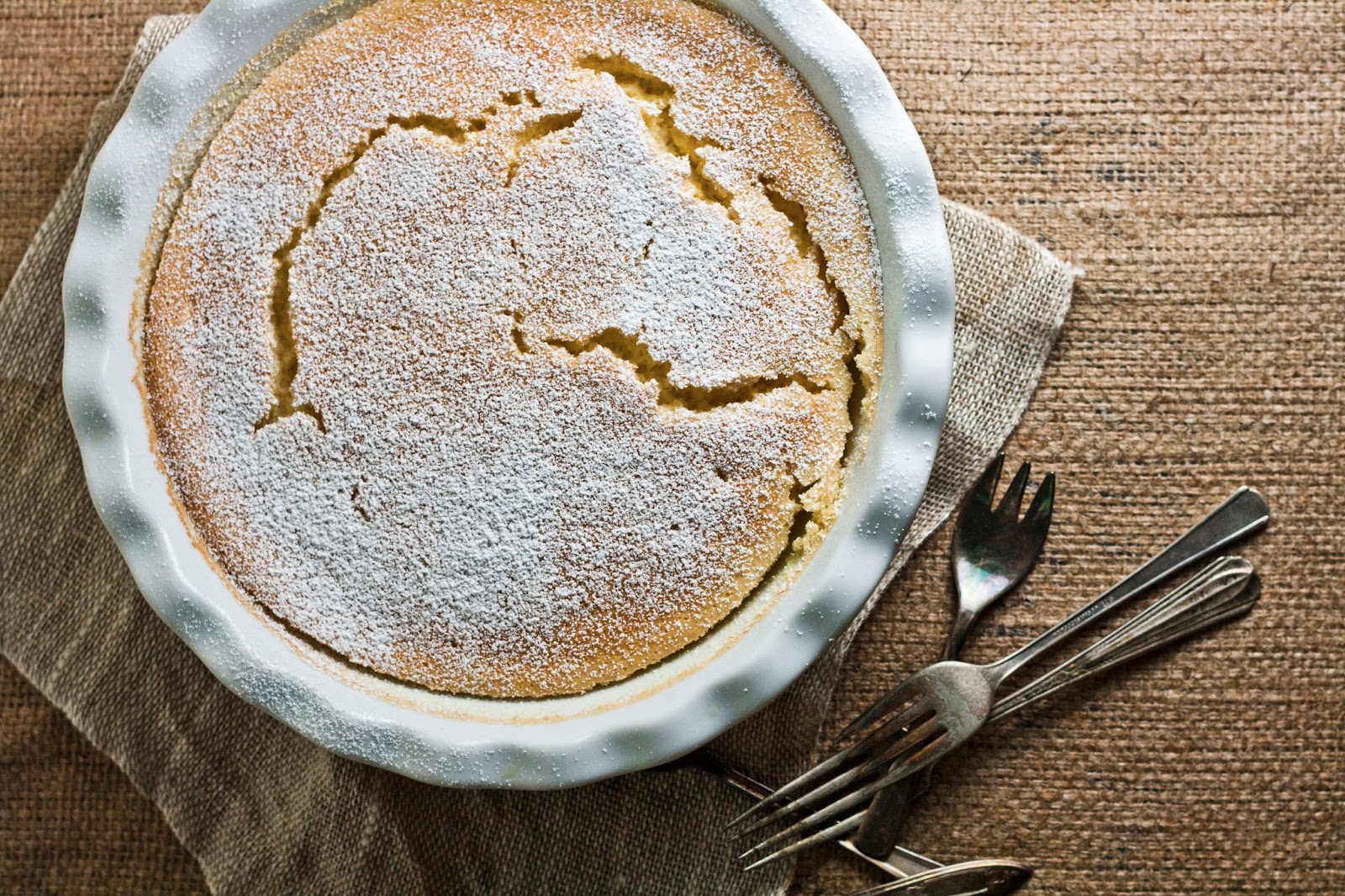 A few weeks ago, I panicked when I saw that meyer lemons were on sale at my local fancypants grocery store. Produce on sale usually means that the season is coming to a close. Shame on me since I still hadn’t posted any recipes that took advantage of meyer lemon season!

The meyer lemons in front of me, however, looked like the last of the crop — too soft and squishy, and maybe even on the verge of molding. No wonder they were on sale! But oh well. I’d been wanting to try preserving meyer lemons for some time now. Might as well get the lemons while the going was still… well, going. I sighed, rolled up my sleeves, and helped myself to a generous bunch with the intention of preserving them later.

Unfortunately, after waiting a day to start my project, I opened up the brown bag containing the lemons and found that almost all of them had gone moldy. So much for that project. I couldn’t hide my disappointment — not only had I failed as a food blogger and failed to bake anything using meyer lemons, I felt like I had missed my last chance for some fresh, seasonal produce. Because we were entering March. Shudder.

March is my least favorite month of the year. Although it’s been a bit of a mild year, March has historically been the time of year in Oregon where the rain is at its worst: unrelentless and seemingly never-ending. It’s also an odd time in terms of what’s in season — with winter stores drying up and spring yet to begin, it seems like there’s nothing exciting or fresh to be found in local stores. Indeed, if you check out this list of what’s in season during March in Oregon, you’ll find… well, nothing.

So imagine my surprise when I walked into that same local fancypants grocery store and found a fresh batch of meyer lemons. So much for missing the season! These meyer lemons were the opposite of the sad batch that I’d bought earlier: bright, firm-skinned, and not a blemish in sight. Even though I knew these were probably the last of the good batch and not as awesome as they would have been at the peak of the season, I couldn’t resist. Besides, I’d had my eye on this recipe for lemon pudding cake for some time now and let me tell you — it did not disappoint: 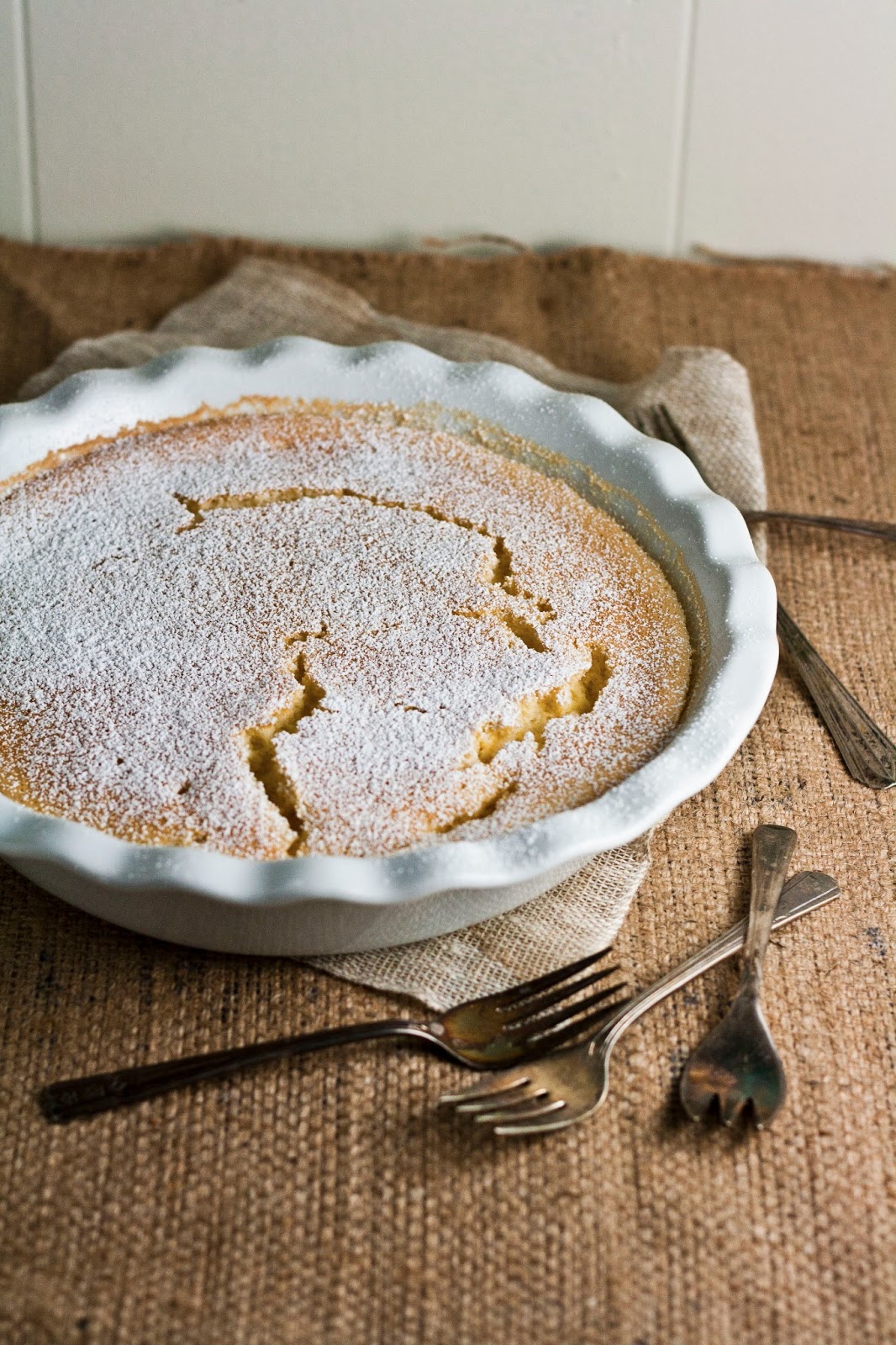 What’s a pudding cake, I hear you ask? Well, this is a bit of an odd analogy, but think of a foamy, warm bubble bath. Imagine it now, awaiting for you after a hard day of work — the layers of light and fluffy foam up top sitting on top of fragrant, warm water.

Now imagine that as a cake. Specifically, a lemon pudding cake. Because that’s what pudding cake is. A layer of ever-so-light and sweet sponge cake sitting — no, floating — on top of a layer of tart lemon pudding: 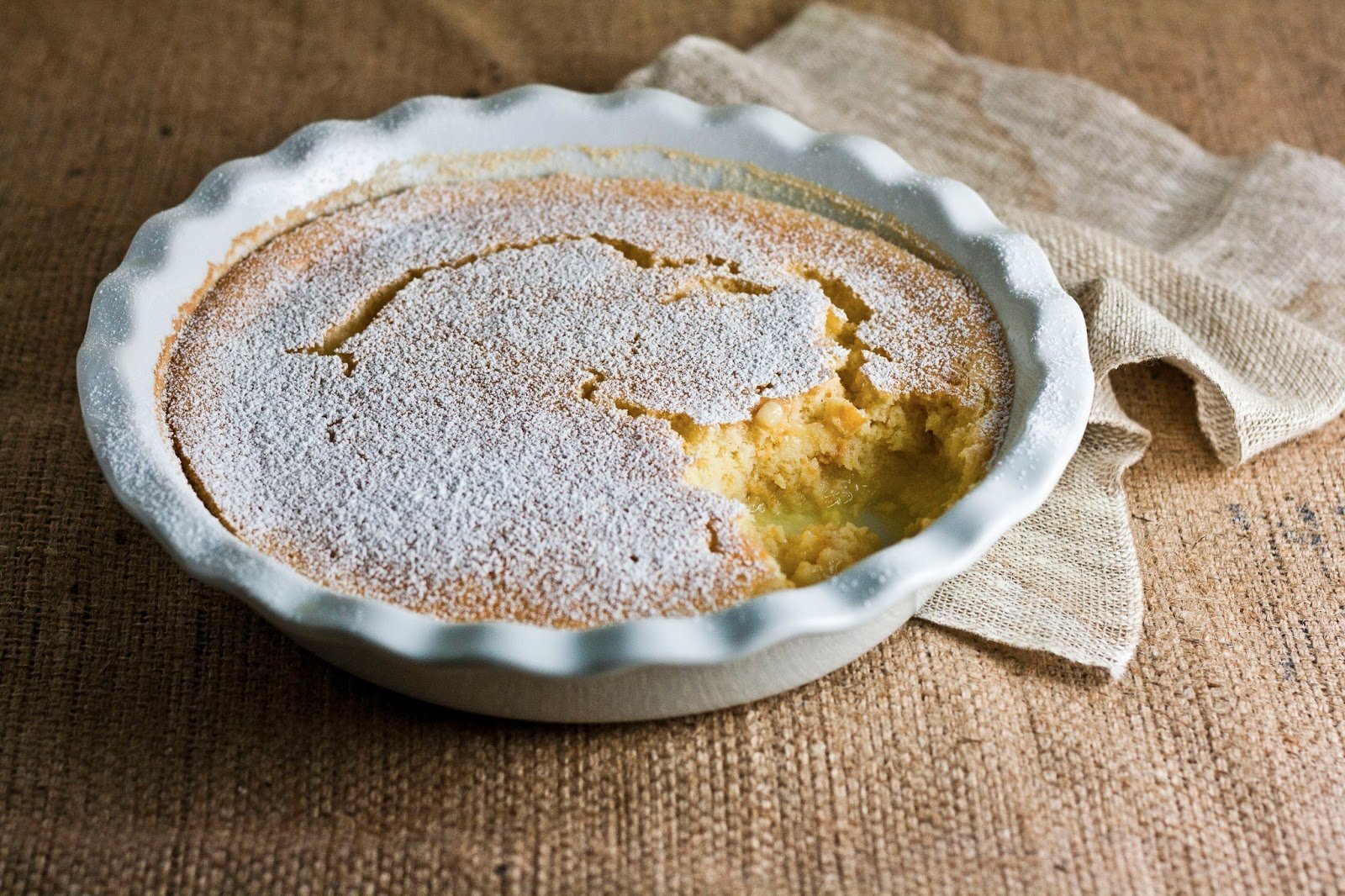 During the baking process, the batter separates to create the two layers to a glorious effect. To wit, after my boyfriend had a bite of the cake, he exclaimed: “Whoa! How’d you do this? Did you make a custard and then bake a cake to put on top of it?”

Ha! As if I would bake something that would require that much effort. See, the trick here is about the recipe’s ratios. The recipe consists of primarily liquids (think: lemon juice, milk, whipped egg whites) and just a touch of flour, which then separate during the baking process to create the two distinct layers. The lighter ingredients (flour, bolstered by whipped egg whites) rise up in the heat to bake like a souffle, while the heavier ingredients (primarily lemon juice and milk) develop into a lemon pudding. Pretty snazzy food science, right?

Because the lemon pudding cake’s batter is primarily liquid, it’s important to bake this in a bain-marie (or, a water bath). A bain-marie allows the cake to cook at a more even temperature throughout the baking process. You can read up about it some more in Miette’s recipe for cheesecake. Don’t worry about the cracks on the cake — they’re unavoidable and lend the cake a beautiful, rustic look to complement its delicious taste. 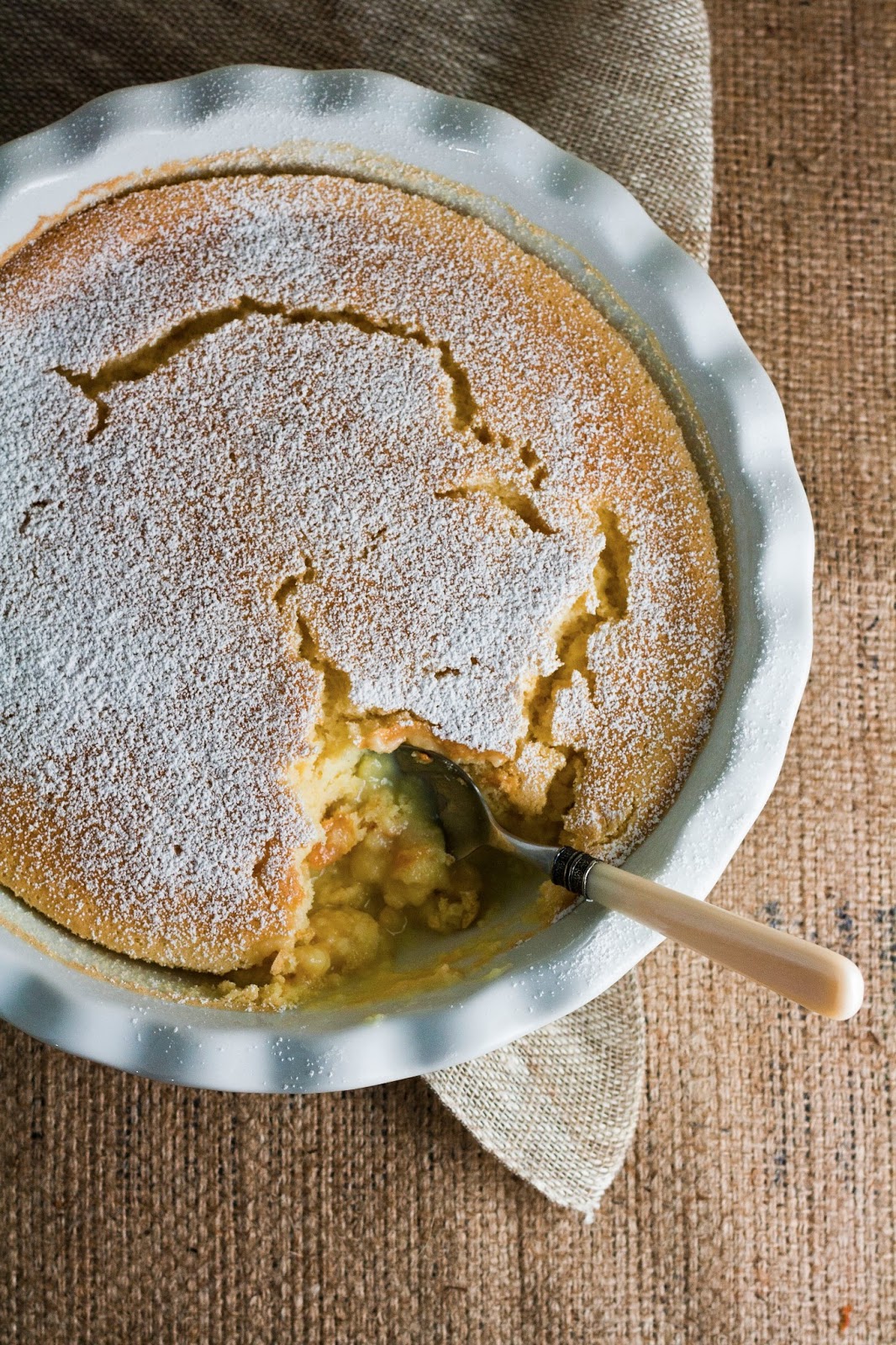 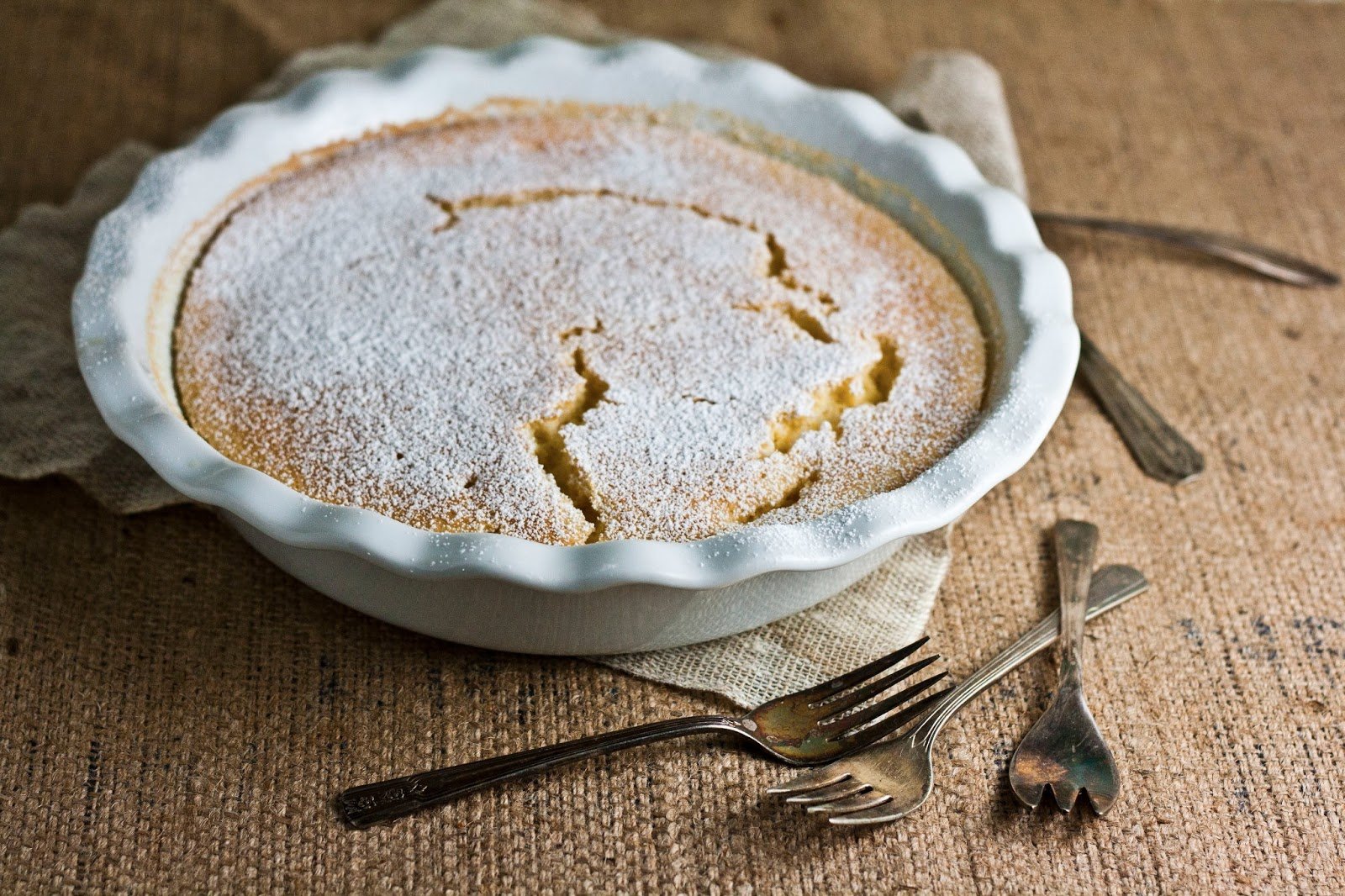 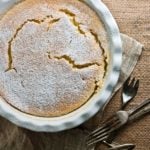 Adapted from Pastry Affair, one of my favorite blogs