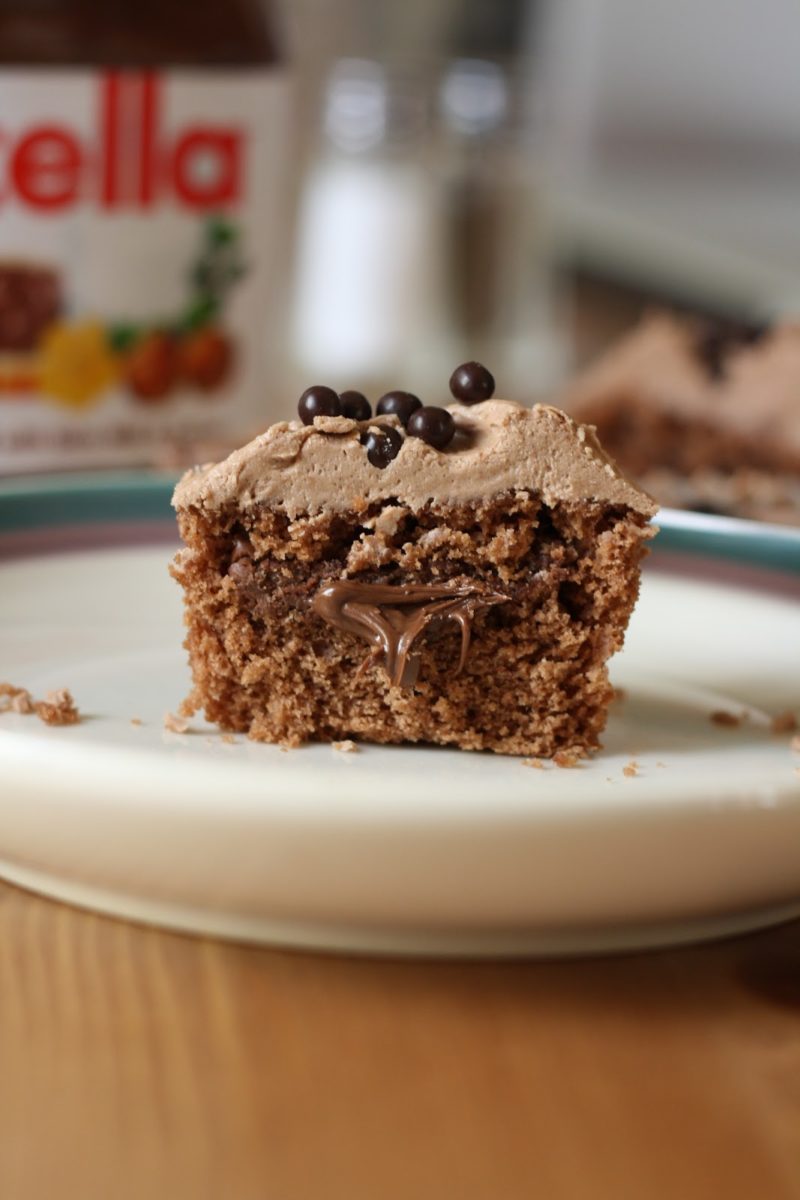 How to Infuse Your Cupcakes with Nutella (or any other cream!)

Ever since I published the recipe for the Hummingbird Bakery’s Chocolate Hazelnut cupcakes a few days ago, I’ve been receiving a lot of questions about one of the steps in the recipe. Specifically, the final step of the recipe instructs you to hollow out a small section of the center of cupcake and fill the […]

Ever since I published the recipe for the Hummingbird Bakery’s Chocolate Hazelnut cupcakes a few days ago, I’ve been receiving a lot of questions about one of the steps in the recipe. Specifically, the final step of the recipe instructs you to hollow out a small section of the center of cupcake and fill the resulting hole with a dollop of Nutella. Doing so results in a cupcake with a delicious surprise in the center: 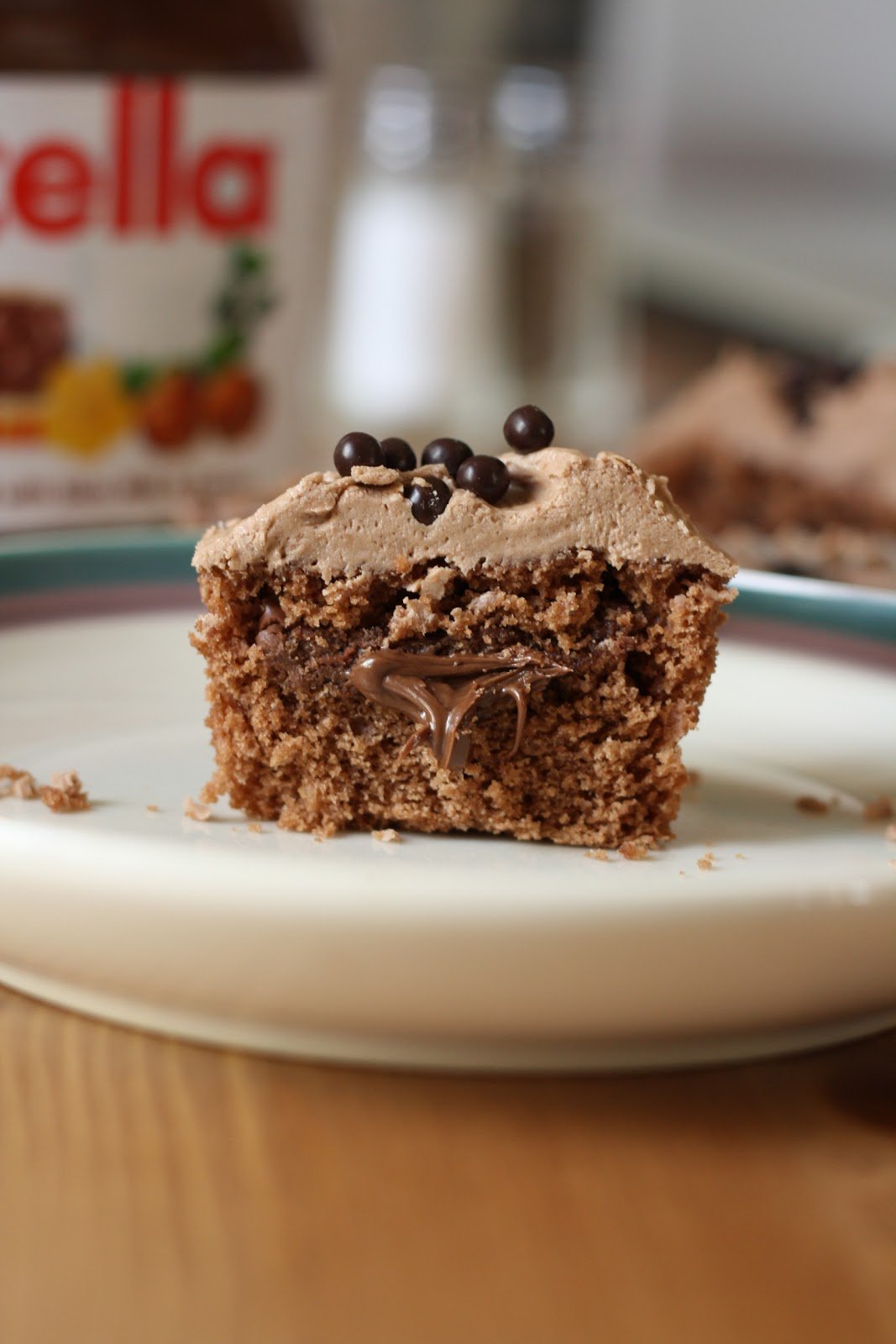 Several readers have asked me what I did to hollow out the center of the cupcake. Ah, yes. I really wish the Hummingbird Bakery Cookbook provided more specific instructions, because I grappled with this myself. I eventually ended up using two very different and not-so-professional methods: 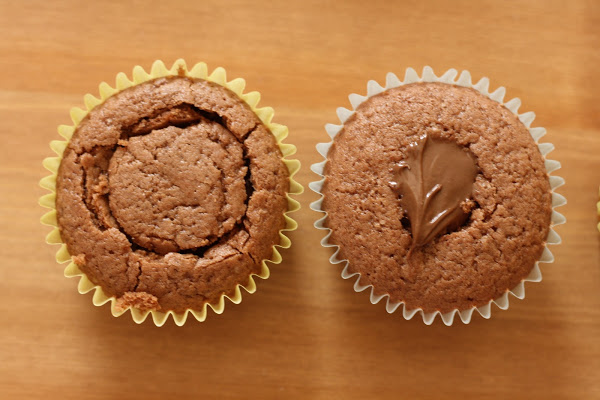 I call them the Cupcake Plunger Method and the Spatula Nub Method.
Hahaha, the names make it sound so much more epic than it actually is!
Let’s start with the Cupcake Plunger.
Believe it or not, this is an actual device. You know how stores like Sur La Table have a multitude of kitschy, single-use kitchen items like pineapple corers and onion goggles? The Cupcake Plunger is one such item: 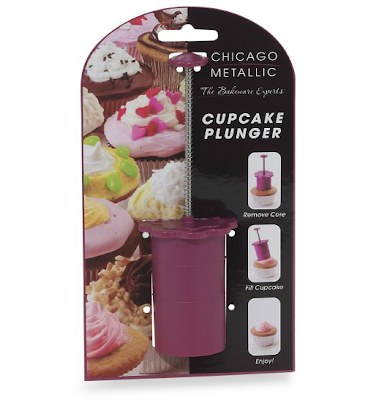 Costing an overpriced $3.99 at your local Bed Bath and Beyond, the Cupcake Plunger is a cheaply constructed tool whose sole purpose exists to help you de-core your cupcake. Use the device to “plunge” a hole into the cake: 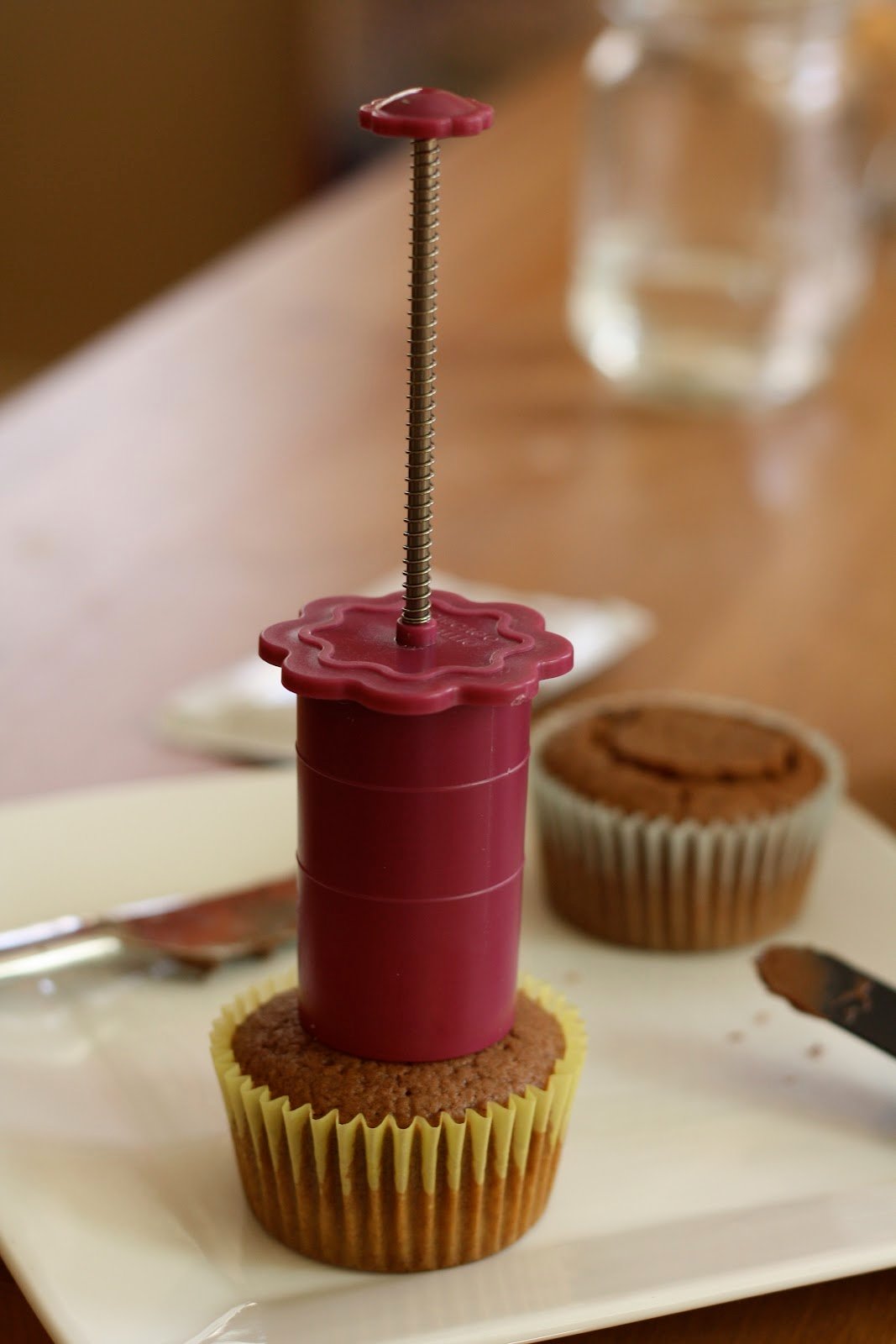 The plunger will then also pull out the “core” of the cupcake, leaving behind a perfect crater: 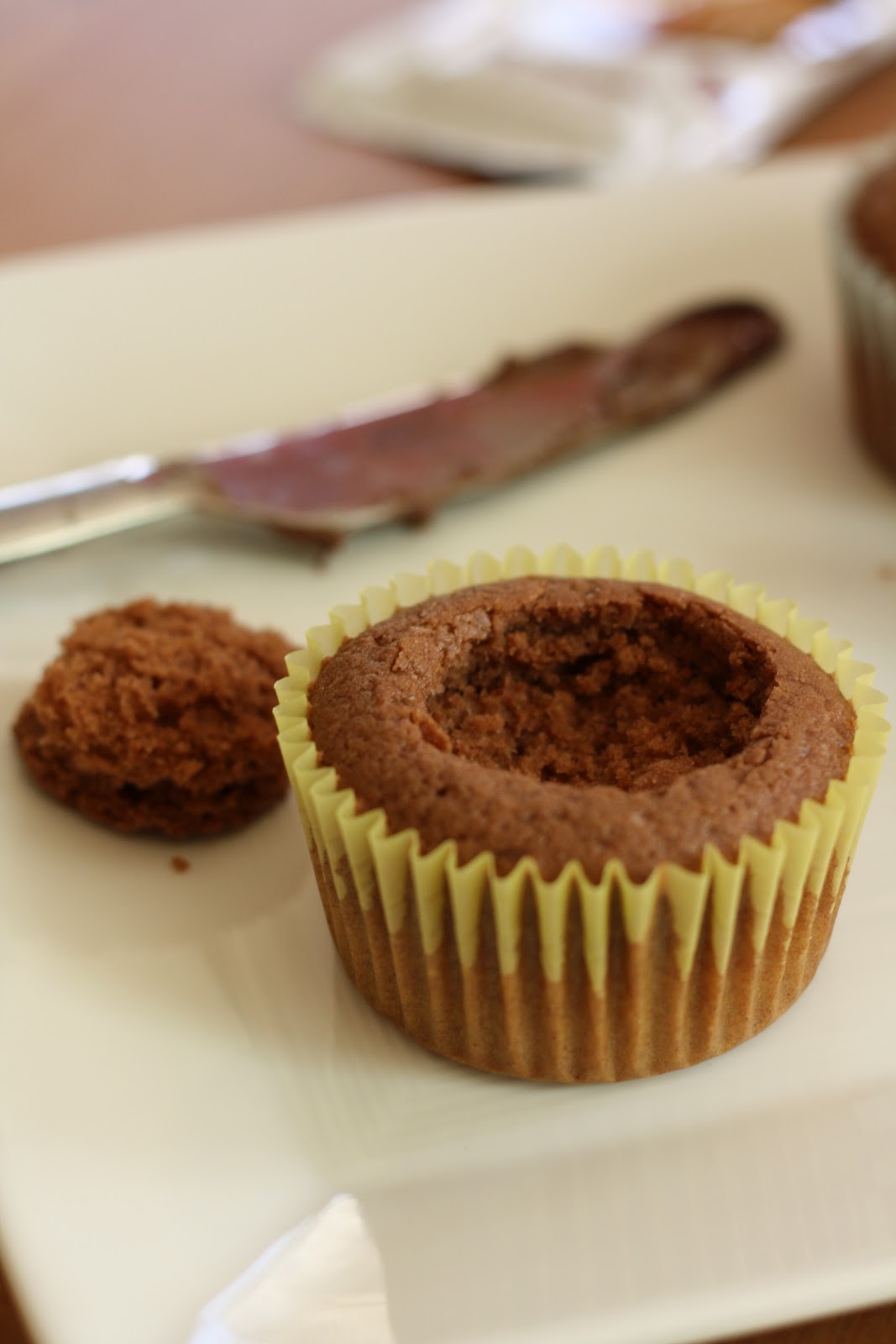 Which you can then fill with the filling of your dreams (or, less obliquely, for our recipe’s purposes, Nutella): 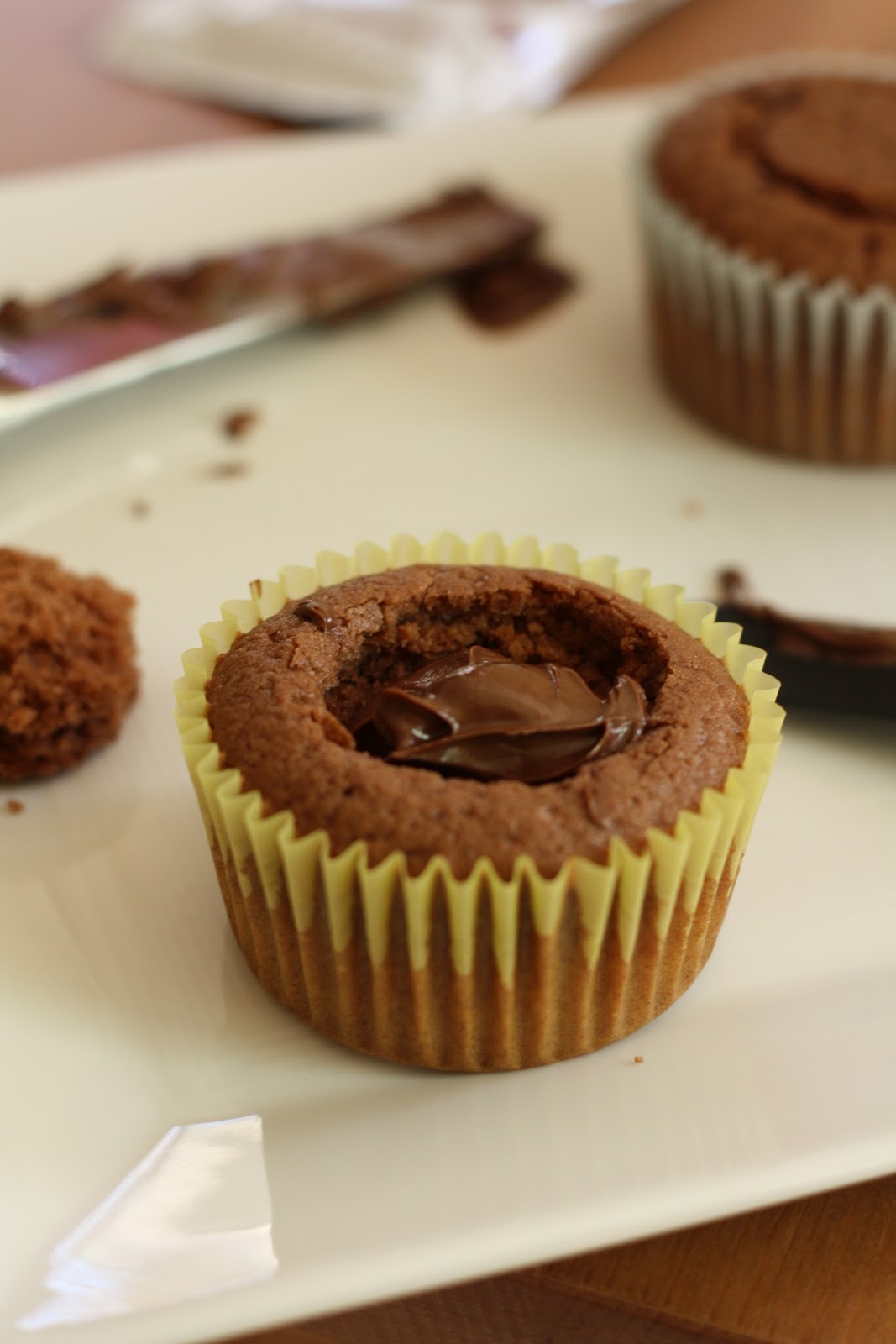 Which you can then reseal with the piece of the cupcake that you initially pulled out: 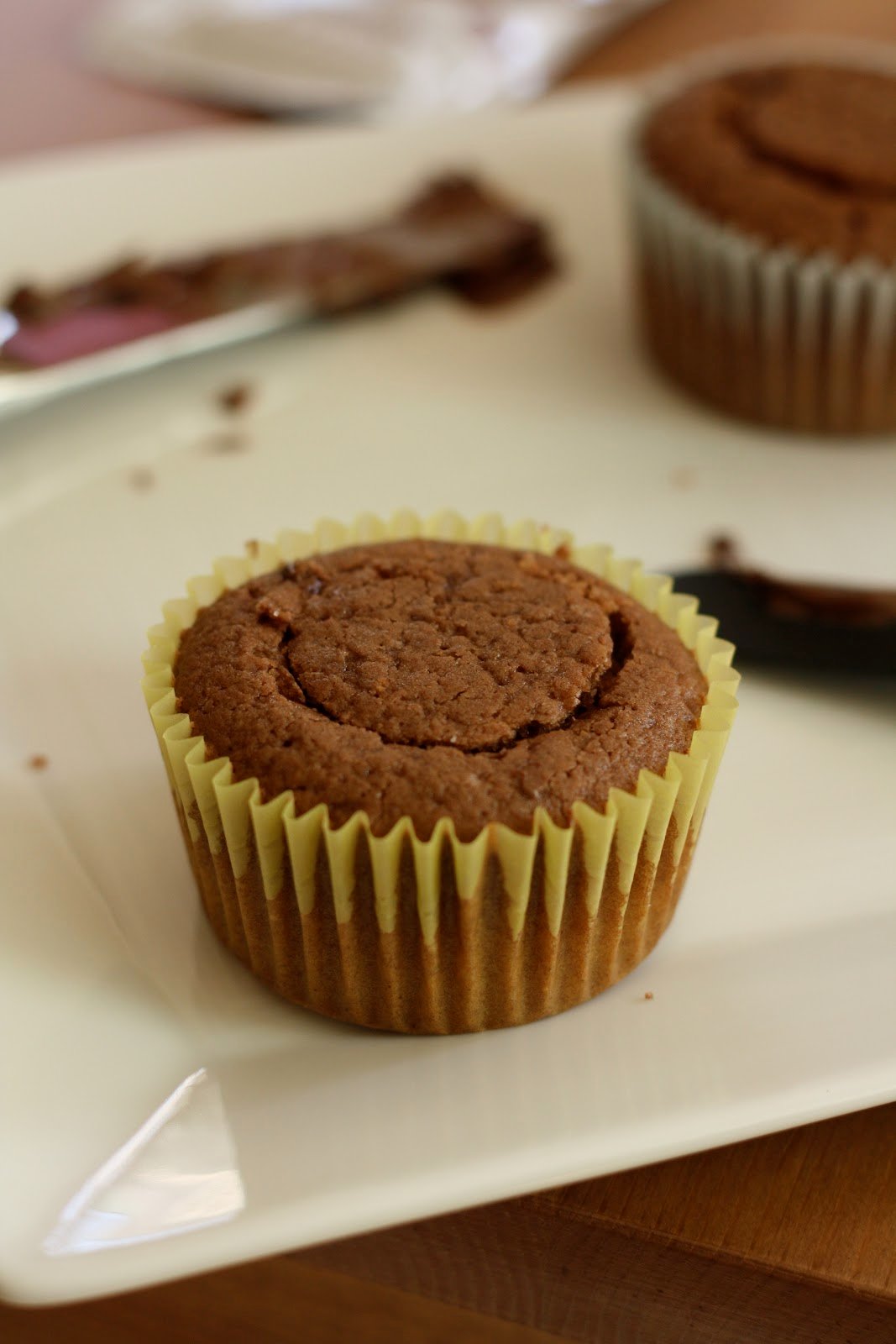 Leaving you with the perfectly stuffed cupcake of your dreams!
…
Yep. I can’t believe I spent $3.99 on this. For shame, for shame.
For those of you smart enough to save your money, you probably want to go with my second method of cupcake filling. I’ve given it the epic name of the Spatula Nub, but don’t be discouraged! Unlike the Cupcake Plunger, you don’t need to go to Sur La Table or Bed Bath and Beyond to purchase some cheaply made, single-use tool. Simply take the handle of your regular icing spatula (I use Kuhn Rikon’s icing spatulas from Sur La Table, but the back of any sturdy kitchen knife will do) and use it to poke a hole (really, more a nub) in the center of your cupcake: 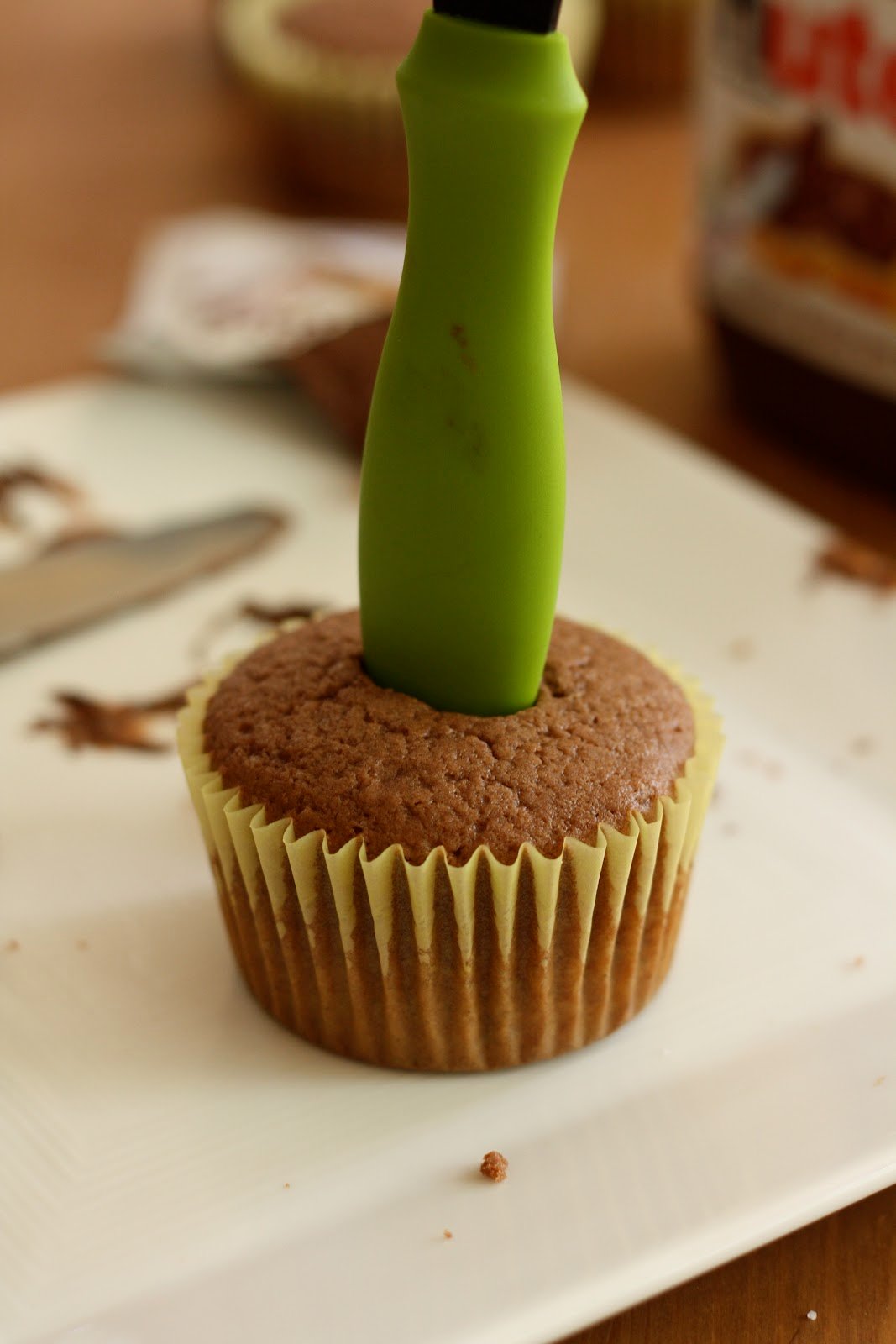 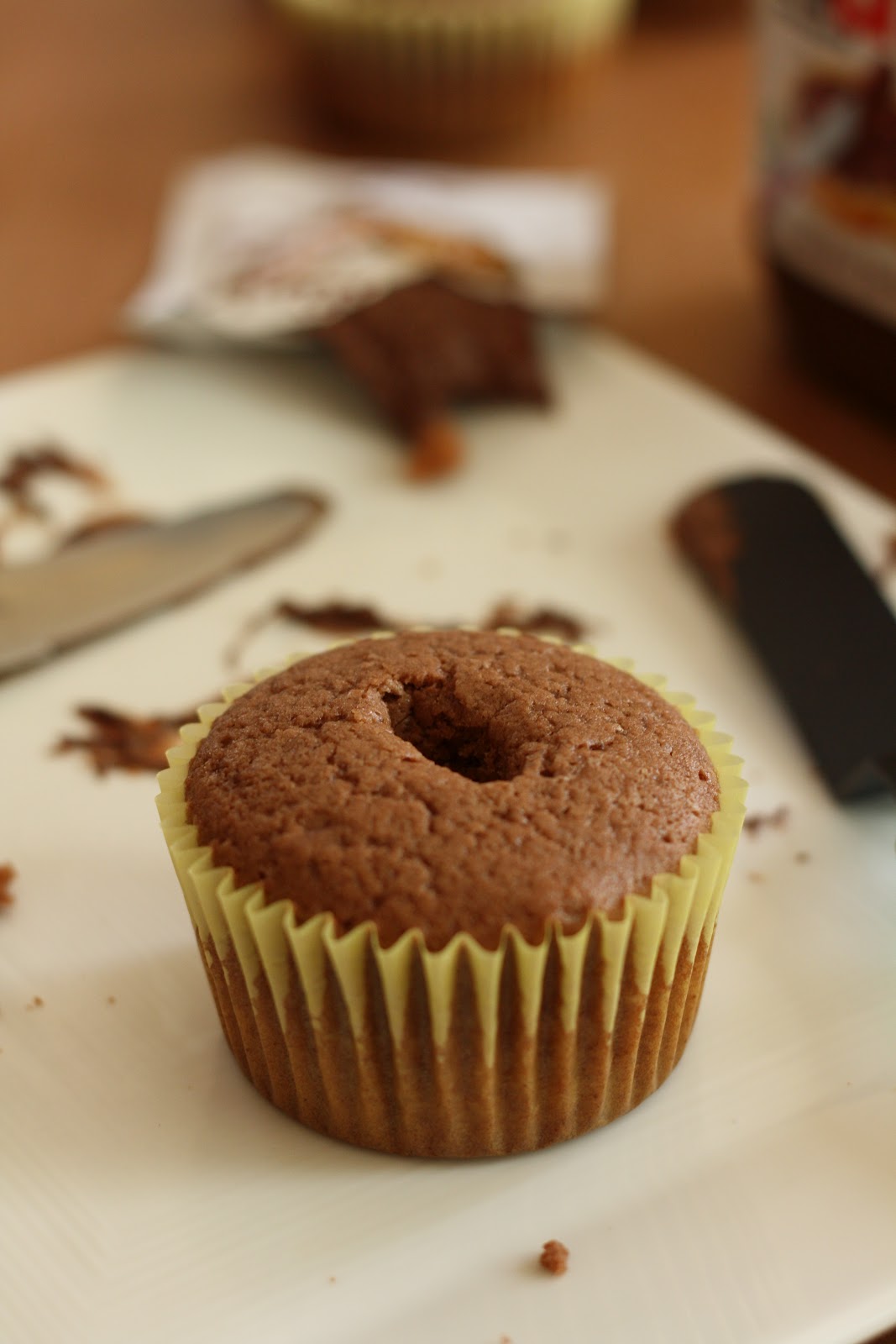 Ta-da!
The advantage to this method is that, hey, you don’t have to go spend some money for an overpriced, terrible, single-use tool that you’ll probably never use again. Although I will admit that the Cupcake Plunger does allow for tastier cupcakes because you’re able to get more Nutella into that crater versus the nub that the spatula creates. Oh well. Trade-offs?

The Spatula Nub Method, on the other hand, leaves your cupcake top pretty smooth. But since the Nutella is kinda just sitting there not being covered by any cake, I was worried that it would mix with the frosting and leave weird Nutella streaks as I tried to frost the cupcake.

But thankfully, neither of these scenarios occurred: I was able to frost both cupcakes without any problem: 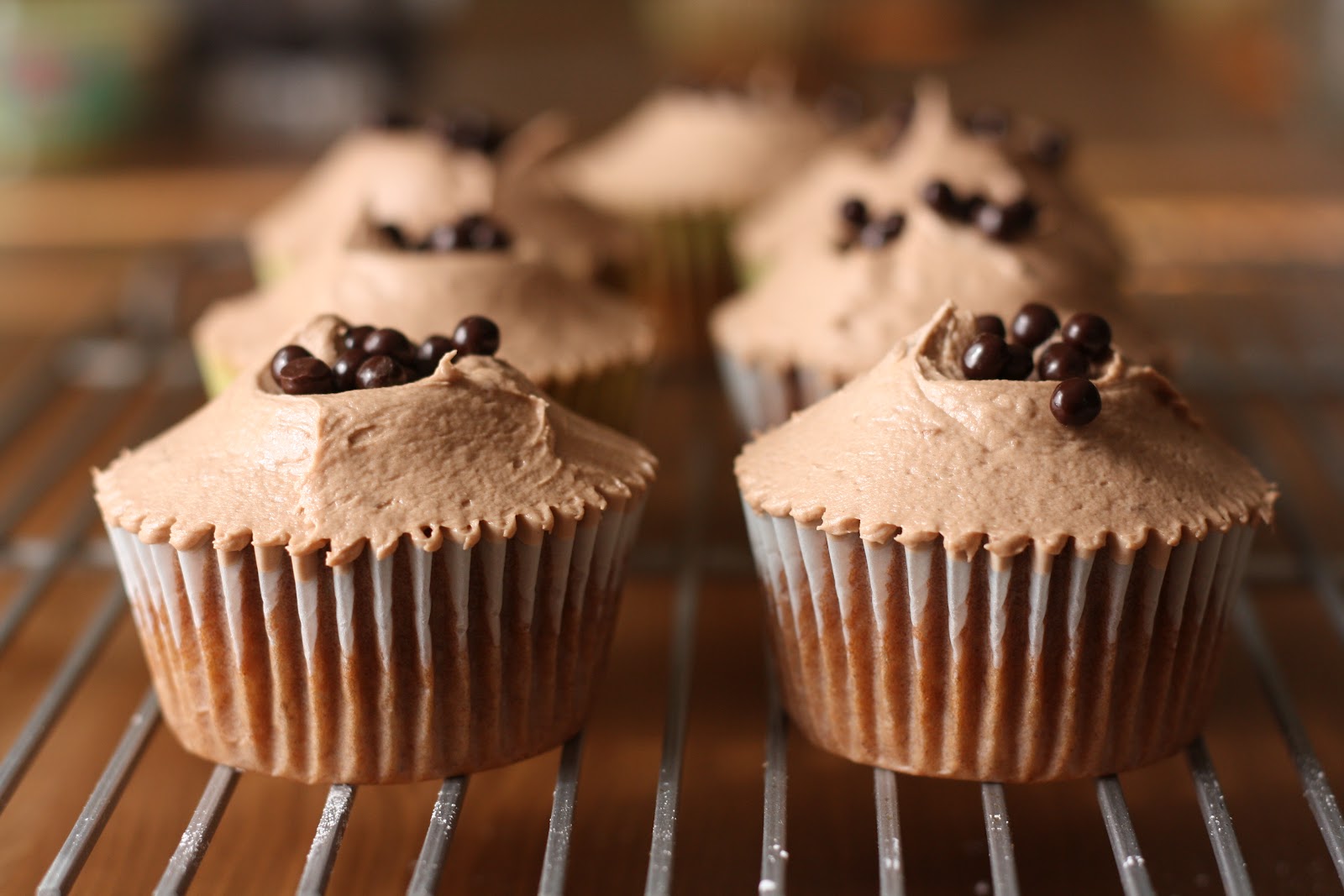 Anyway, if there’s anybody out there who has a better method for putting filling inside cupcakes, do share! I’d love to hear all about it. 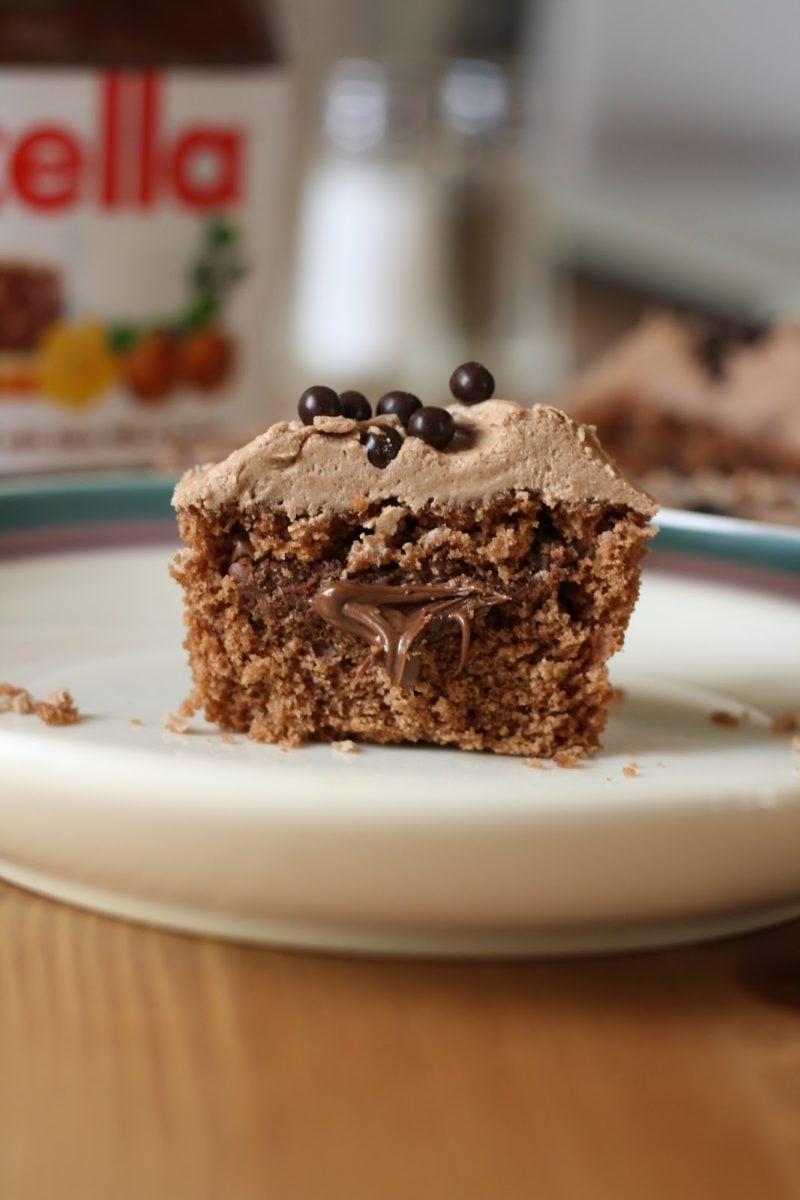 TAKE THE #HUMMINGBIRDHIGH READER SURVEY! If you’