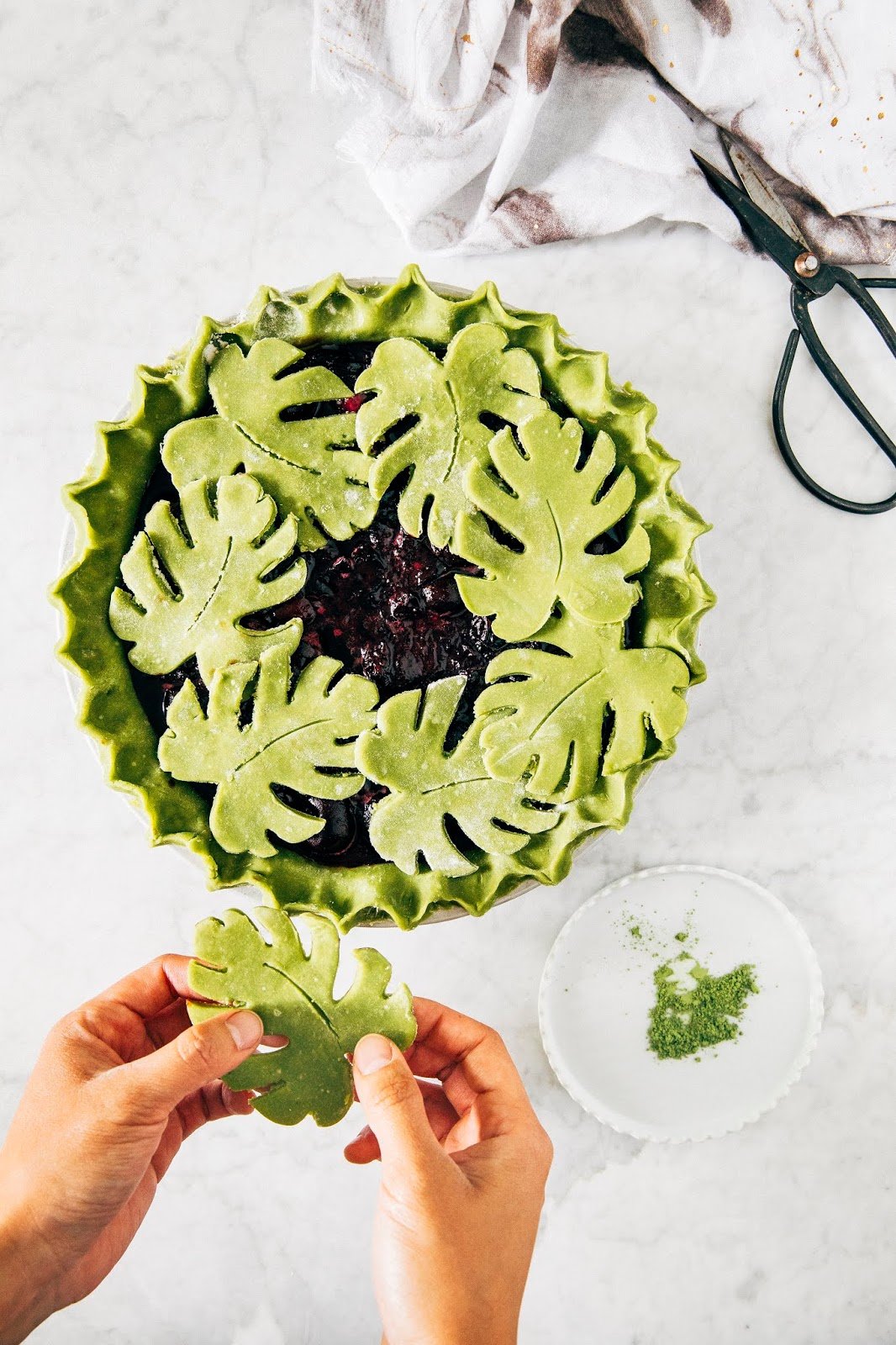 I’ve never had much of a green thumb. I’ve been a successful plant parent a grand total of two times in my life: the first was when I was 24 and kept a random bamboo plant in the corner of my kitchen far away from natural light, occasionally watering the poor thing when I remembered […]

I’ve never had much of a green thumb. I’ve been a successful plant parent a grand total of two times in my life: the first was when I was 24 and kept a random bamboo plant in the corner of my kitchen far away from natural light, occasionally watering the poor thing when I remembered to (so, maybe like, once a month?). For some reason, it thrived — I gave it to my friend when I moved away to Denver, where she promptly killed it by overwatering it. C’est la vie.

The second time was three years ago, also the second time I lived in San Francisco. Erlend’s mom gifted me a potted orchid right before I left for Europe for two weeks. It promptly shed its flowers, but I kept watering its dead-looking bulb under Erlend’s long-distance guidance. Nothing happened for a full freaking year; despite my constant watering, it looked as dead as it ever was… right until the week I moved to New York, of course. Literally days before my big move, the moldy looking bulb burst into life, sprouting thirty or so beautiful orchids all at once. I gave it to that same friend I gave my bamboo plant to; she promptly killed it. Again. 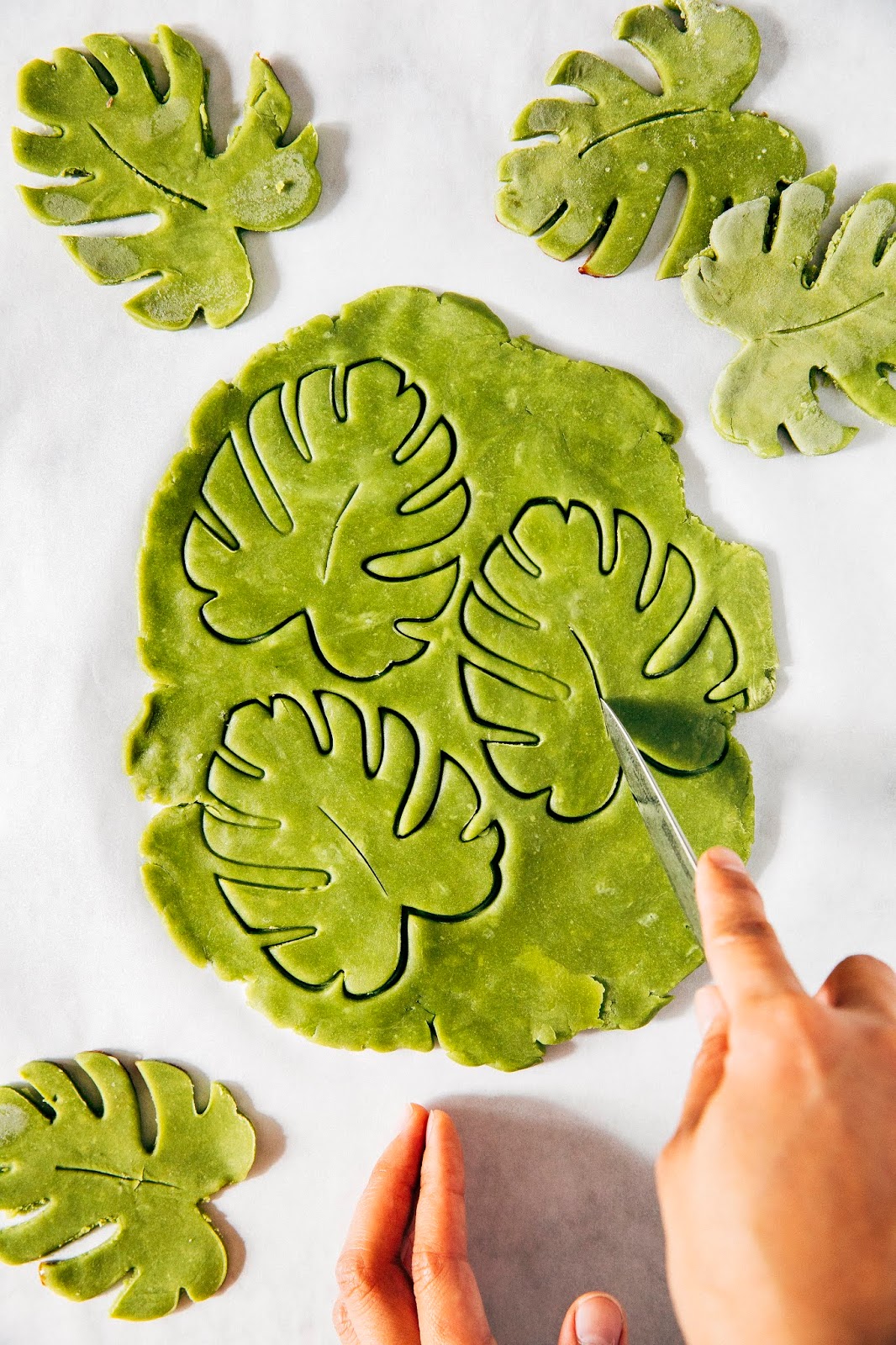 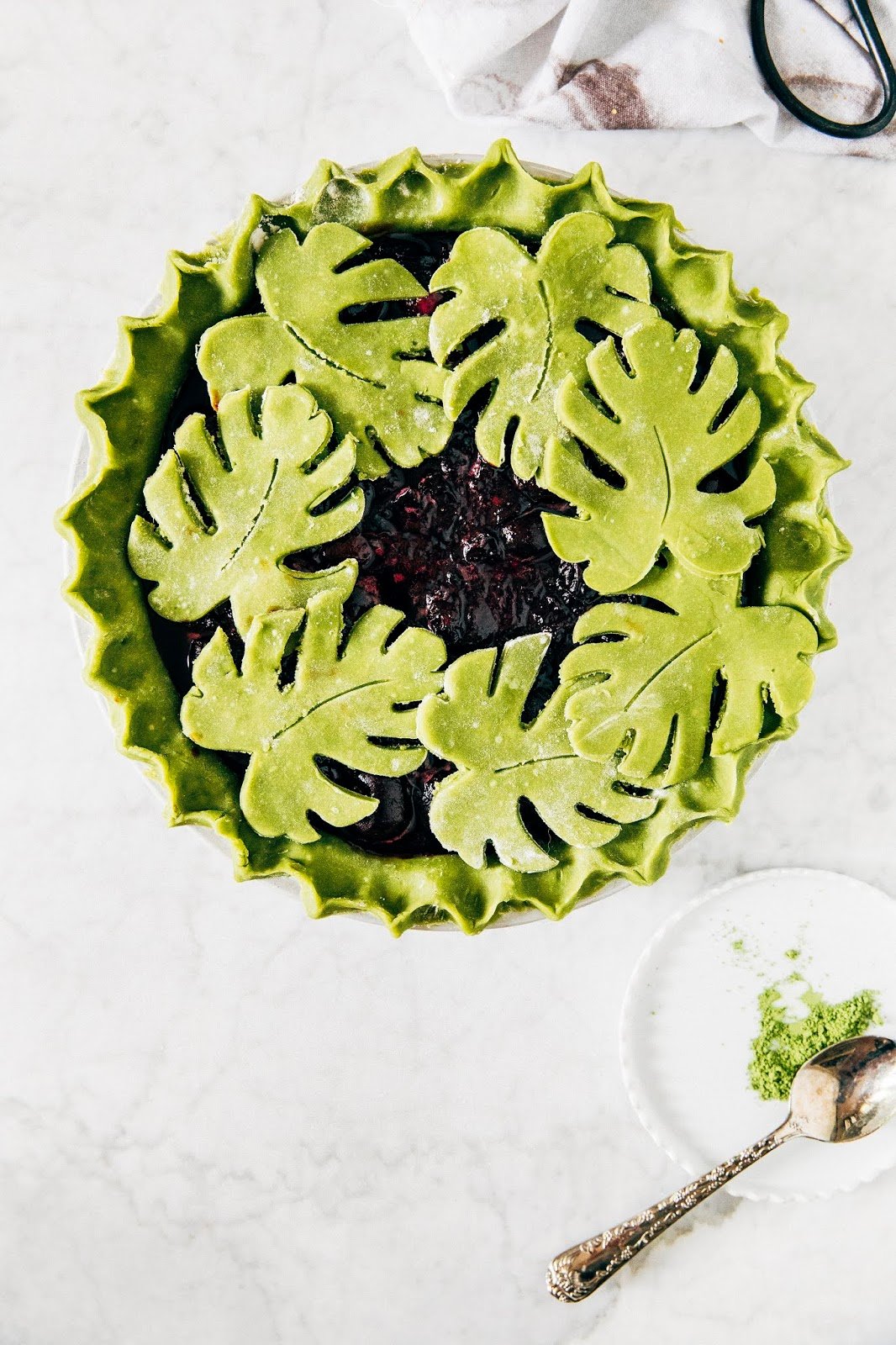 These days, my plant parenting duties are limited. After years of struggling to take care of and killing the trendy plant du jour (let’s see… my plant casualties include a window garden box full of herbs, many small succulents, a fiddle leaf fig, an airplant or two, a potted string of pearls, cacti of different varieties, and probably more I’m forgetting), I’ve given up officially. My interaction with plants is now limited to the following: occasionally stopping on my bike rides across town to take photos of pretty flowering trees; purchasing overpriced blooms at New Seasons and the Portland Farmers Market for use on cakes; and using cookie cutters to recreate my favorite flowers and leaves on pies.

Monstera leaves are the hip plant du jour and I see them everywhere in trendy hotel lobbies, restaurants, and of course, Instagram. So when I saw these monstera cookie cutters on Amazon, I knew I had to have them. I initially thought about making a matcha sugar cookie situation with the cutters, but being summer and all, thought that pie was probably more relevant and seasonal. 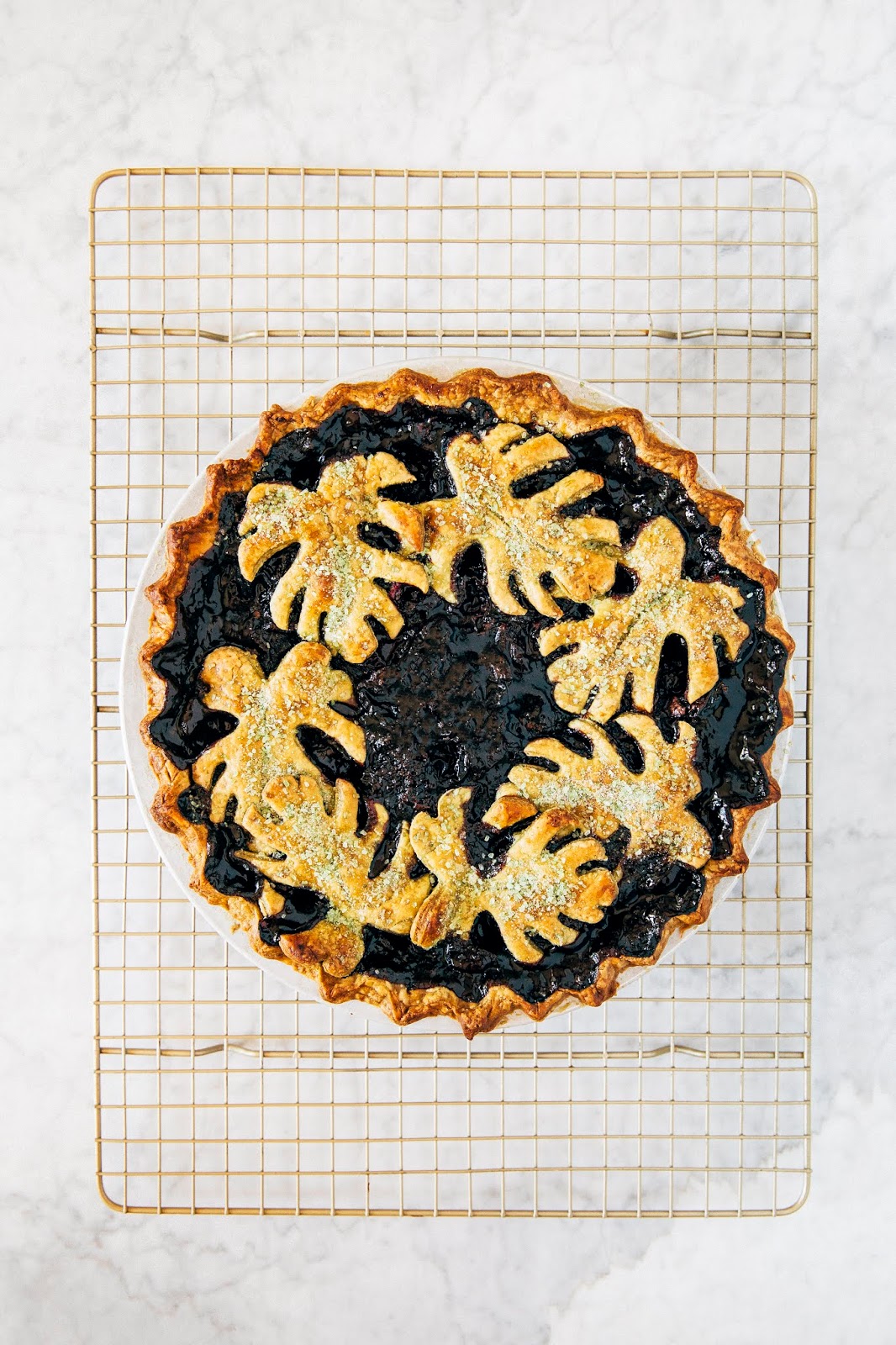 The problem with making dyed pie dough (either with a vibrant green powder like matcha, or with other vegetables like beets or freeze-dried fruit with blueberries) is that once cooked, the color tends to get usurped by the Maillard reaction and any coloring fades away to the generic golden yellow of pies. I tried to combat this in many ways (by sprinkling the top of the pie with matcha and/or dyed green sugar and finding that the matcha burned to an unattractive brown and that the sugar wasn’t strong enough to fight the pie’s golden color), none of which worked. I also thought that cooking the pie filling before baking would reduce the pie’s overall bake time, allowing me to pull the pie out earlier when it was still green (yeah, no, all that ended up resulting in was a pie with an undercooked bottom crust and middle). And after everybody’s enthusiasm for this pie’s vibrant green color on Instagram, I was actually ashamed to post the final product, a generic golden pie, on this blog and considered scrapping it completely.

But then I took a bite.

The pie crust, despite its golden color, was perfect. Crispy, flaky layers, with just the slightest hint of matcha to compliment a deep, cherry vanilla flavor. The best part is that cooking the filling beforehand yielded the perfect pie consistency, the kind that didn’t run or turn the pie crust soggy after slicing.

So maybe the baked pie doesn’t stay as attractive and appealing as it is raw. But it sure as heck is tasty, and maybe that matters more? You tell me. 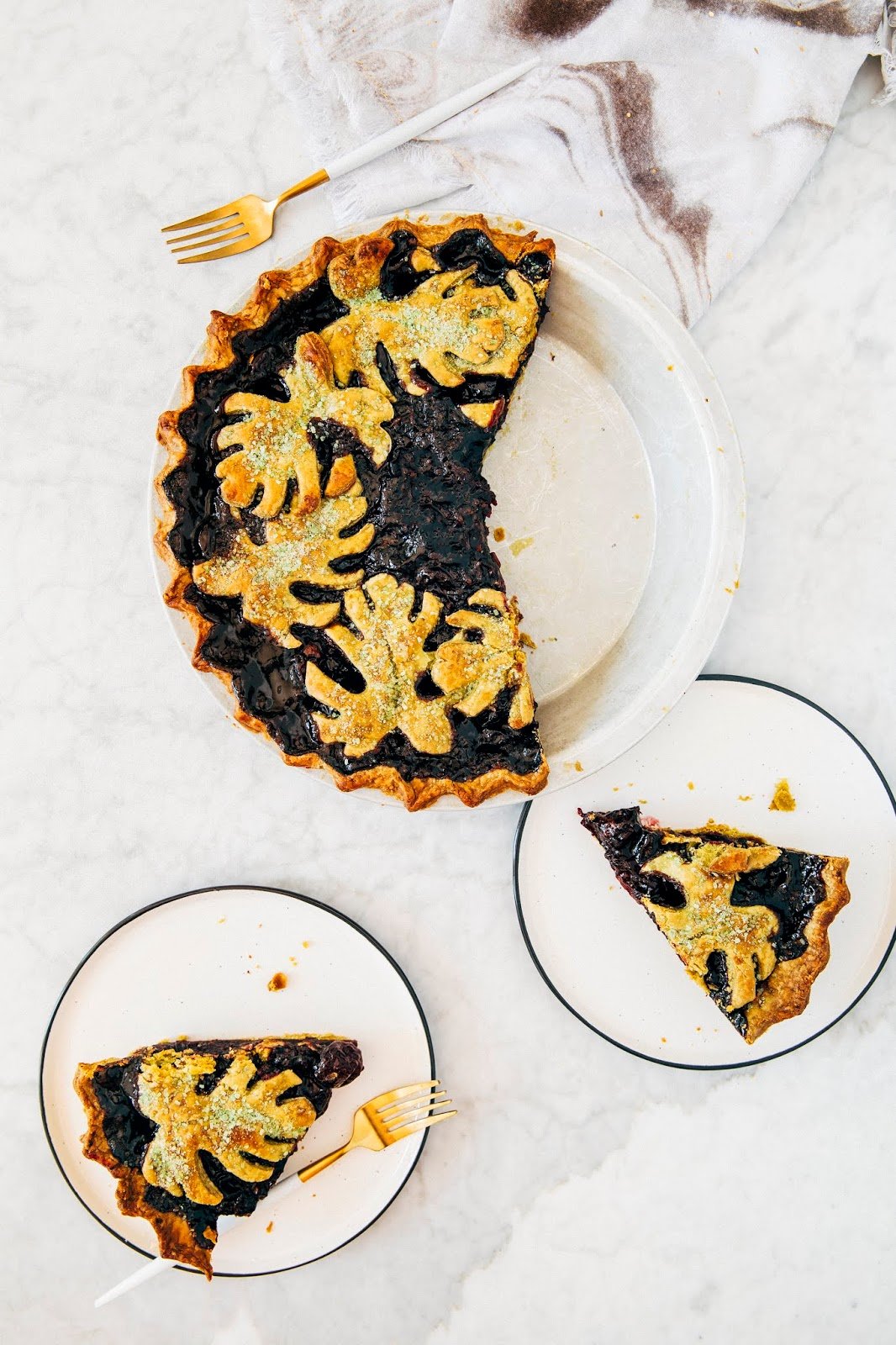 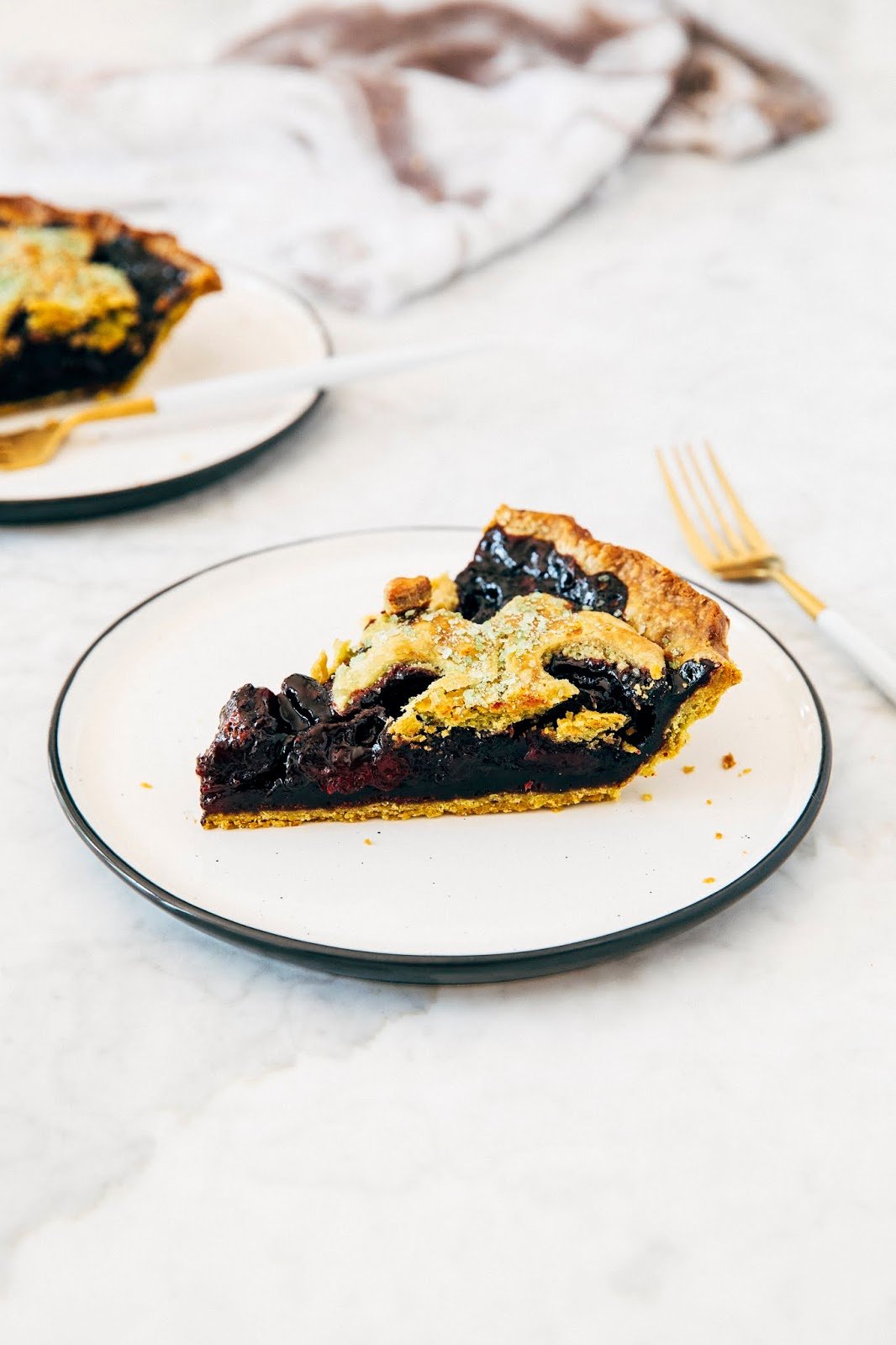 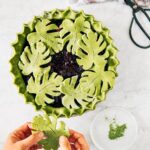 For the Matcha Pie Crust

For the Cherry Filling

For the Matcha Pie Crust

For the Cherry Filling