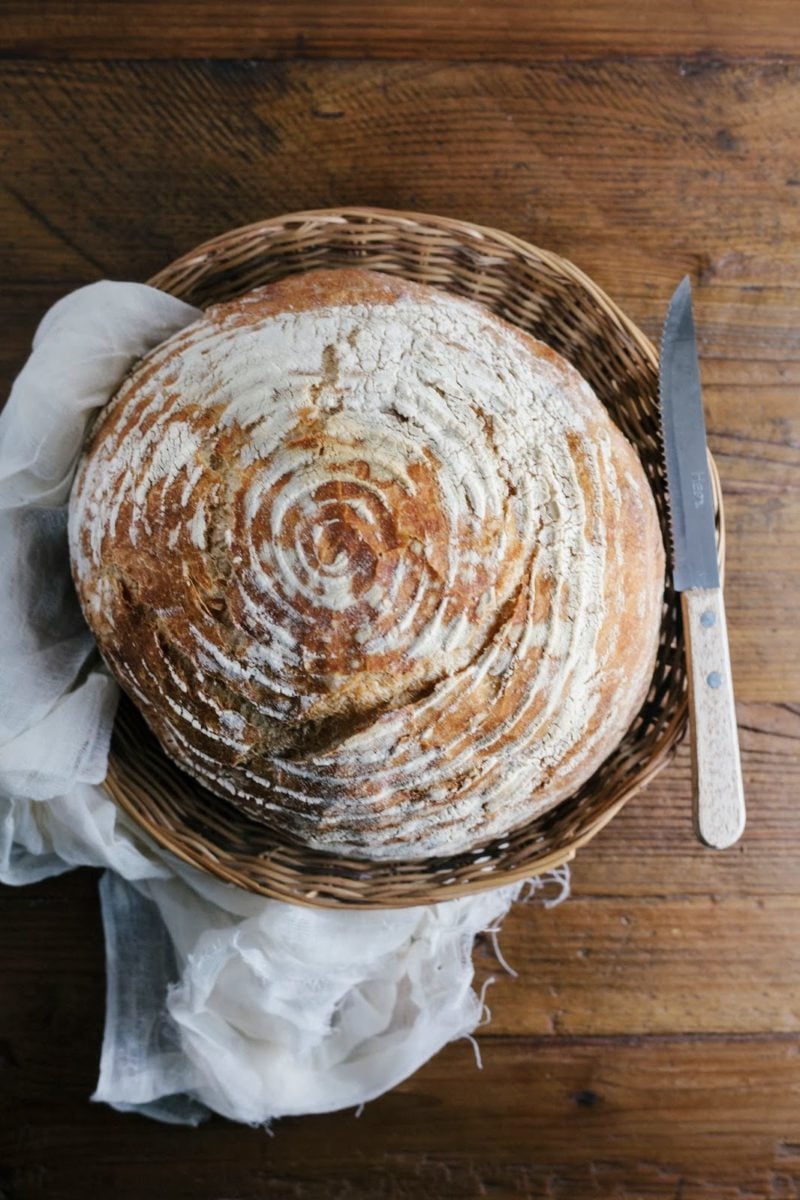 The following guest post is by my roommate, Kevin. As we all know, I’m a terrible bread maker. Well, not terrible exactly, but it’s definitely not my forte — whereas I can churn out beautiful cakes just like that, my bread often looks flat and misshapen while tasting dense and doughy. I’ve always made it […] 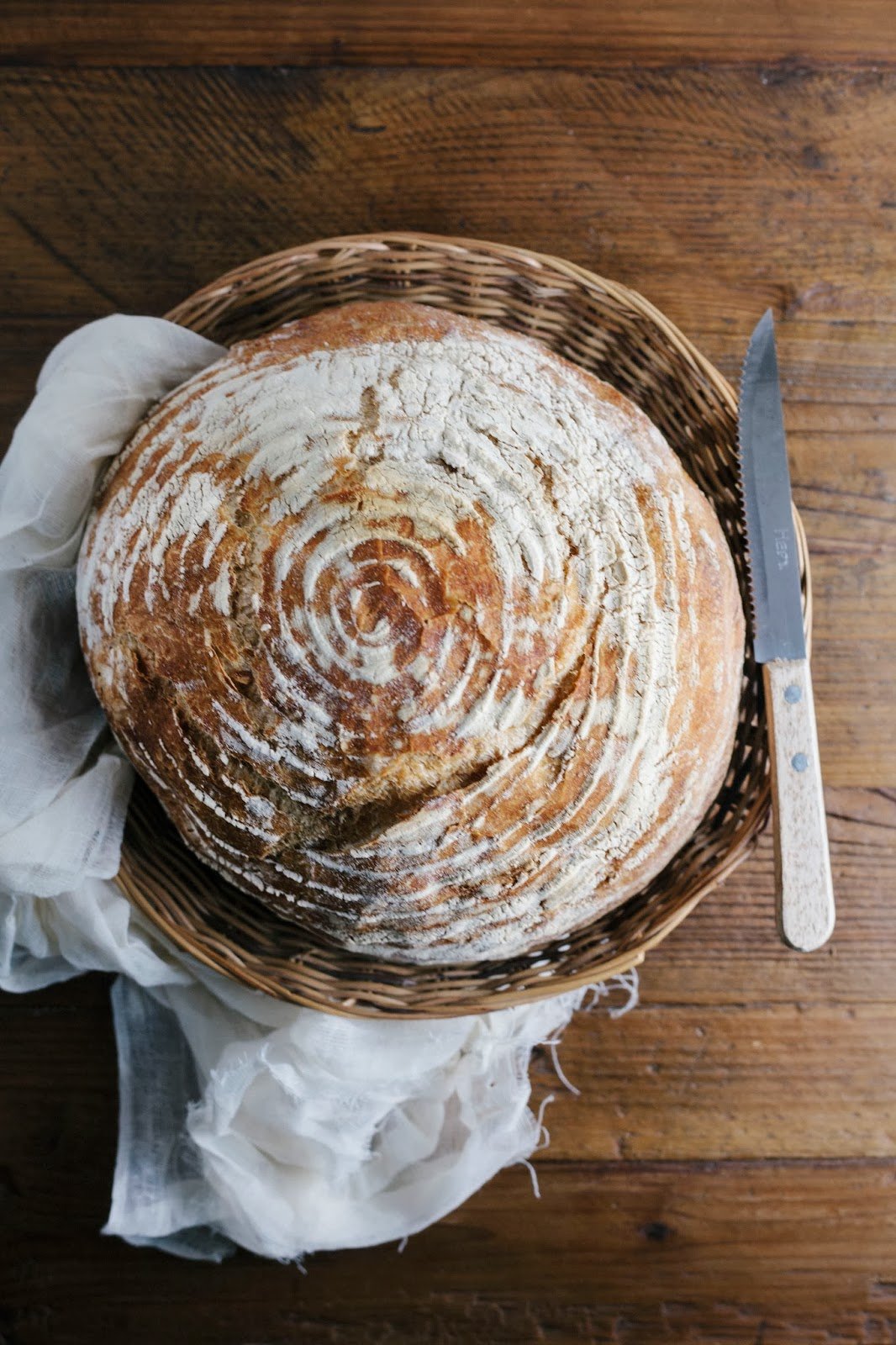 The following guest post is by my roommate, Kevin.

As we all know, I’m a terrible bread maker. Well, not terrible exactly, but it’s definitely not my forte — whereas I can churn out beautiful cakes just like that, my bread often looks flat and misshapen while tasting dense and doughy. I’ve always made it a resolution to get better (Anybody remember Bread Month on this blog? Nope? Me either. What about the three times I declared that I would get better at baking bread?), but life always keeps getting in the way.

Kevin, on the other hand, knows and understands things about dough that I don’t. He effortlessly churns out beautiful, well risen breads with golden crusts on a weekly basis. Almost every loaf he makes has a perfect open crumb, with a gorgeous crackly crust. His bread is absolutely delicious, especially when fresh from the oven and served with some butter and salt.

A few weeks ago, I asked him if he could teach me and my readers the way of bread. And here are his secrets: 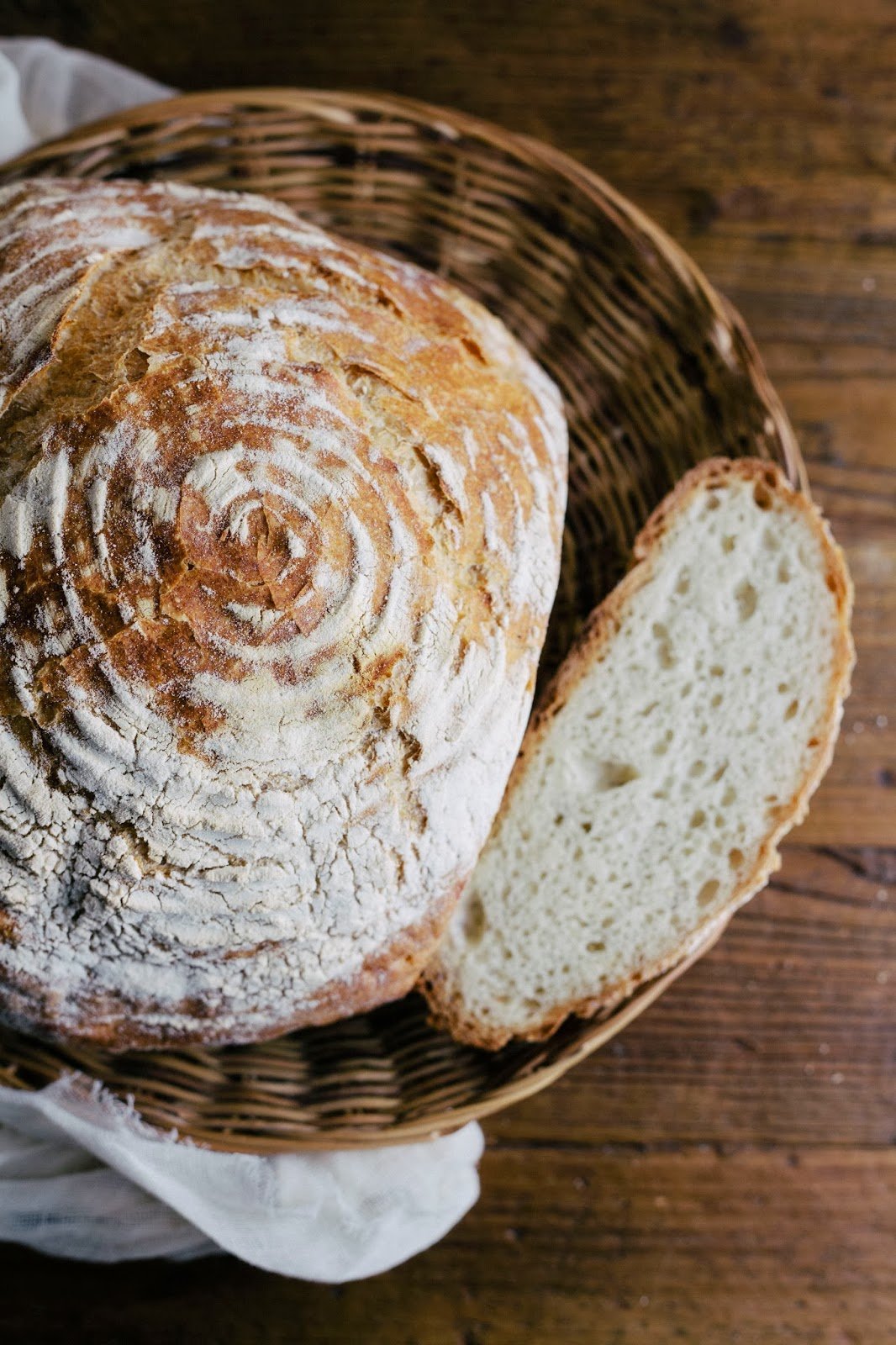 Making bread is pretty easy. Of course, there’s always more to work on, but the basics are remarkably accessible and the product looks good and tastes better even from the beginning. Honestly, I still feel a little guilty when somebody compliments a loaf that I baked. I don’t wake up at four in the morning or knead the dough until my wrists get sore. I don’t have a sourdough start in the back of the fridge that I regularly feed or hum little songs to. I just put four ingredients in a big tupperware, mix it all around a bit with a wooden spoon, wait, shape it, bake it and eat it. It took me a long time to realize that these first steps of the long climb to bread mastery are a totally guilt-free, acceptable, and (mostly) non-sacrilegious way to make a good bread that’s better than what you’ll find at the supermarket.

Unfortunately, the simplicity of this foundation can be hard to spot under the shadow of the edifice it supports. Cracking open a book of bread recipes, it’s easy for the uninitiated to get overwhelmed by the vocabulary: proofing, hydration ratios, barms, bigas, sponges, and starts. Sure, there are plenty of great resources to read about these things. In fact, you’d probably never run out of them — and that’s the problem: rather than just diving in and baking, it’s easy to get the feeling that you’ve got a lot of homework to do.

But if you’re like me, you can just skip all that, start in the middle with some sort of multi-grain pâte fermentée, and fail. And not fail spectacularly so much as… well, just imagine the sound of a spoiled sourdough start flopping into the compost bin and you’ll have a pretty good onomatopoeia for the feeling of bread-making gone wrong! And to think that I’d been feeding the damn thing for a week and a half.

It’s not easy for a beginning baker tackling a complex recipe to find the cause of a problem, so start simple. Once you have a working baseline, it’s a lot easier to tinker with things. If you’re making adjustments to a recipe that you know already works, it will be a lot easier to diagnose any issues you have with the final product. To do this, you’ll need a baseline recipe. The first recipe that I found that worked for me was the adaptation of Jim Lahey’s no-knead bread recipe featured in the Dining and Wine section of the New York Times (side note from Michelle — I tried this recipe too, but my bead was never as good as Kevin’s!). As far as the home-baker is concerned, this recipe has two big advantages going for it. First, rather than requiring kneading the to accelerate the development of gluten in the dough, Lahey’s recipe simply includes a longer resting period — allowing the gluten to develop at its own rate. This is a bit of a trade-off: a longer overall bake time, but a much shorter hands-on time. Second, rather than requiring a bread-machine or a professional high-temperature oven, this recipe suggests using a heavy covered pot to get a similar effect at a much lower temperature. The pot traps steam, so you don’t have to worry about the steam dish suggested by some recipes. Additionally, if you use a heavy Dutch oven or clay pot, it will act like a breadstone and contribute thermal mass, giving you a crispier crust.

However, if you work all day, scheduling the long rise can be a bit of a hassle. This recipe from The New Artisan Bread in 5 Minutes A Day is another great one that I’ve found, and I highly recommend it. I’ve kept a couple things I like about Lahey’s recipe — mostly using a Dutch oven — but worked in a lot of the time-saving techniques from Jeff Hertzberg and Zoë François’ book. It turns out that you can cut down the suggested 12-18 hour rise time significantly and get a similar effect. Furthermore, by making a high-hydration dough in a resealable container, you can save your dough away in the refrigerator for surprisingly long periods of time (as long as two weeks!) and still get good results.

And before I get to the recipe, a warning: the most grievous error a beginner can make is to mistake aspirations for imperfections. There’s nothing wrong with chasing the dome-topped loaf with a custard crumb and crispy crust, but if yours turns out a little flat or the crumb isn’t as open as you hoped, you’d be wrong to think that you failed. Archaeologists think people have been making breads from natural grains since well before the agricultural revolution of the Neolithic — something like 30,000 years. And you just made yours! It’s fun to set goals for yourself, but the idea that there could be a right and wrong way to bake bread is absurd. So here’s the real test: cut off a slice. Slather it with butter or jam, if you like, and take a bite. Is it good? Then you’ve got nothing to worry about. Bake on! 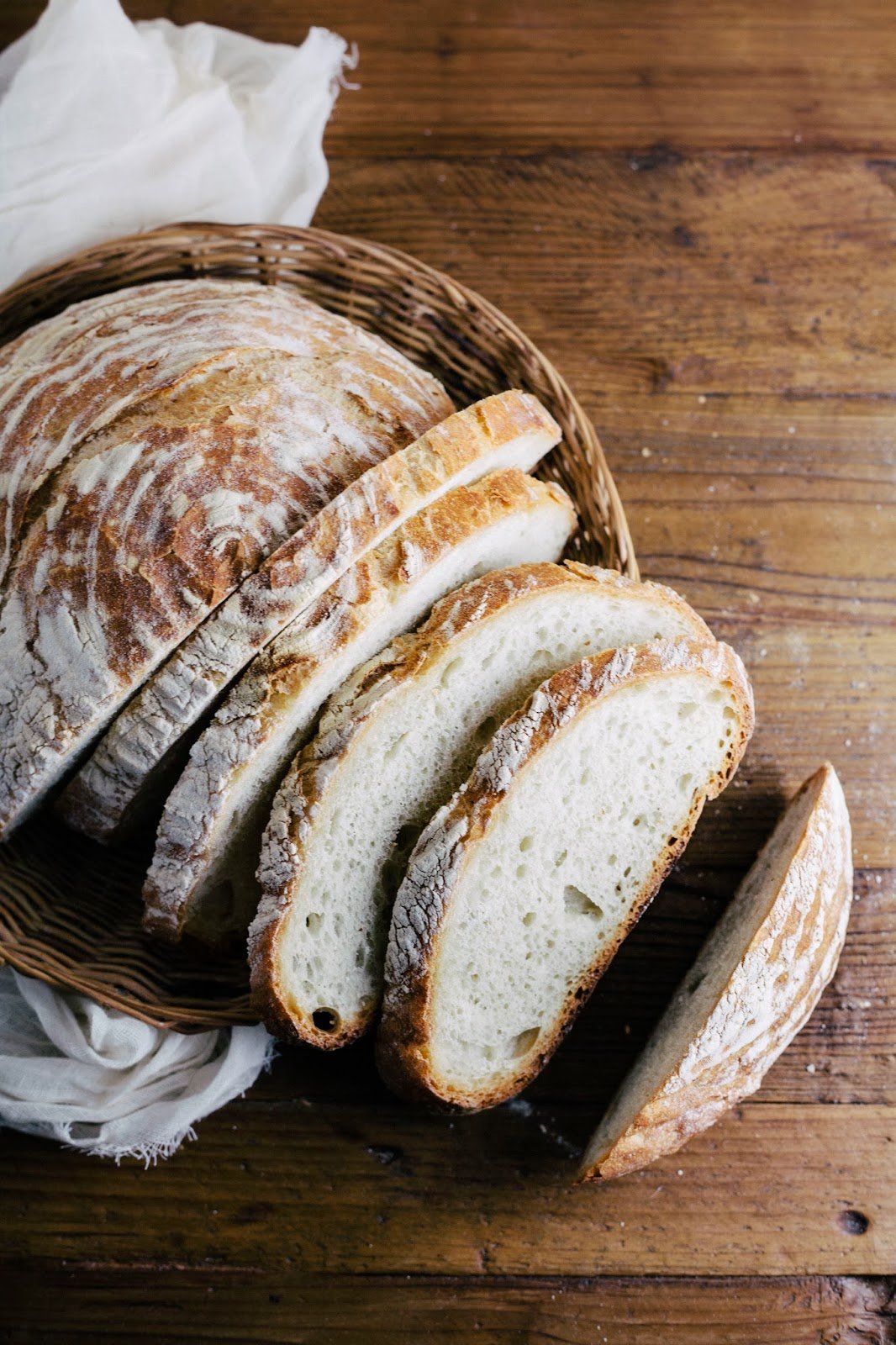 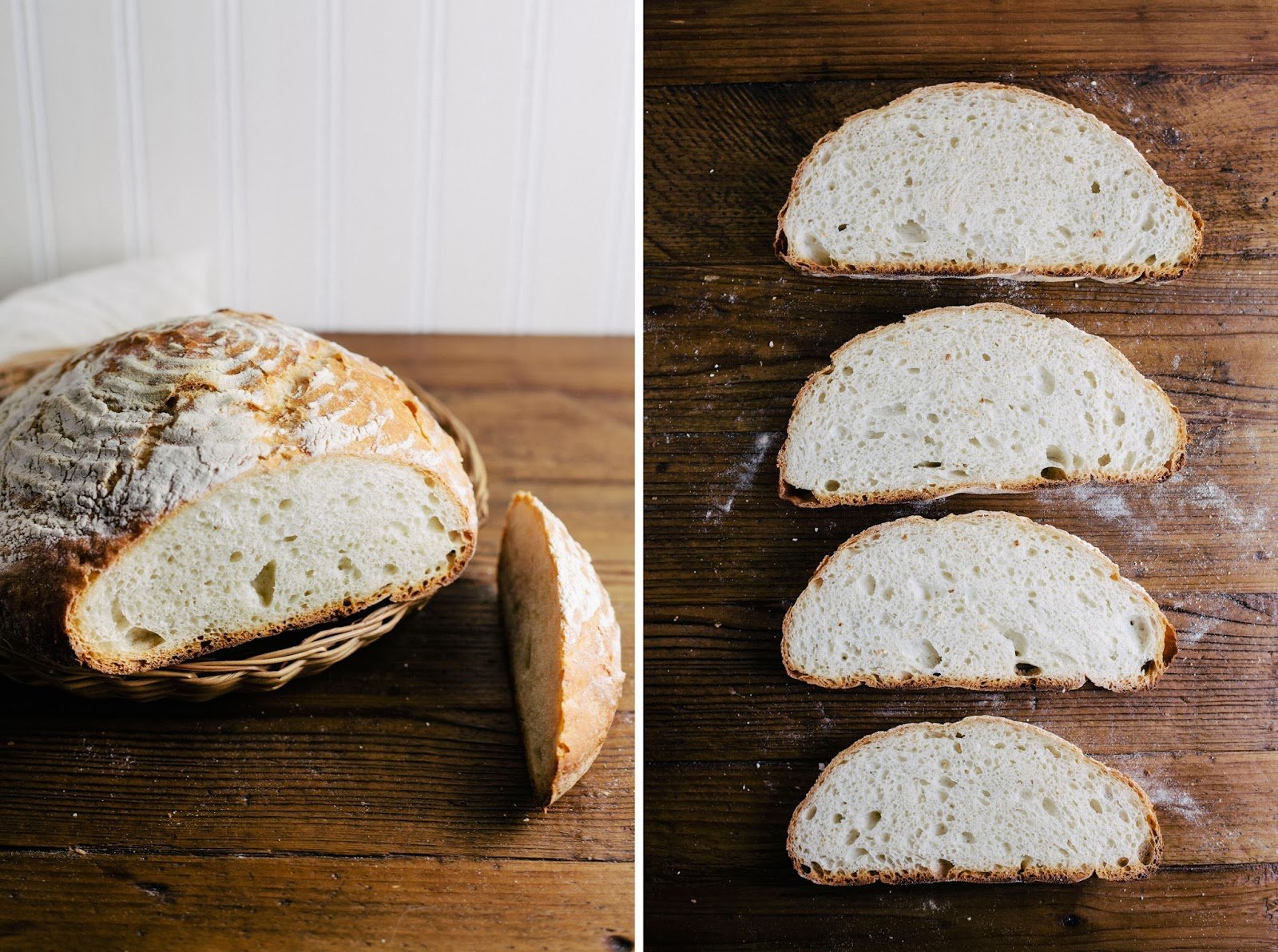 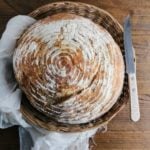 Adapted from The New Artisan Bread in 5 Minutes A Day