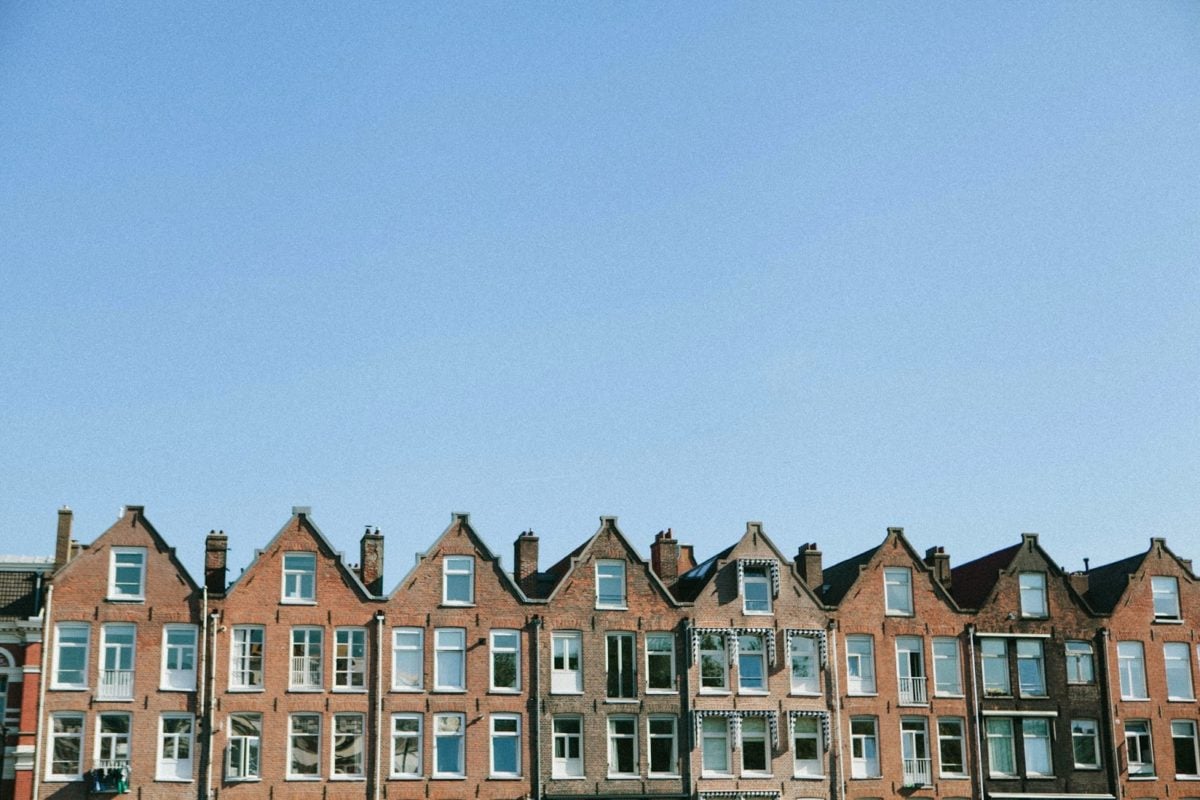 Eurotrip 2013, Part I: The Netherlands

I spent the last week and a half visiting friends and family both in the Netherlands and England. Truthfully, I didn’t do too many touristy things, having been to both countries several times before. There was a lot of catching up with each others lives and aimless wandering around the city. Although my vacation was […] 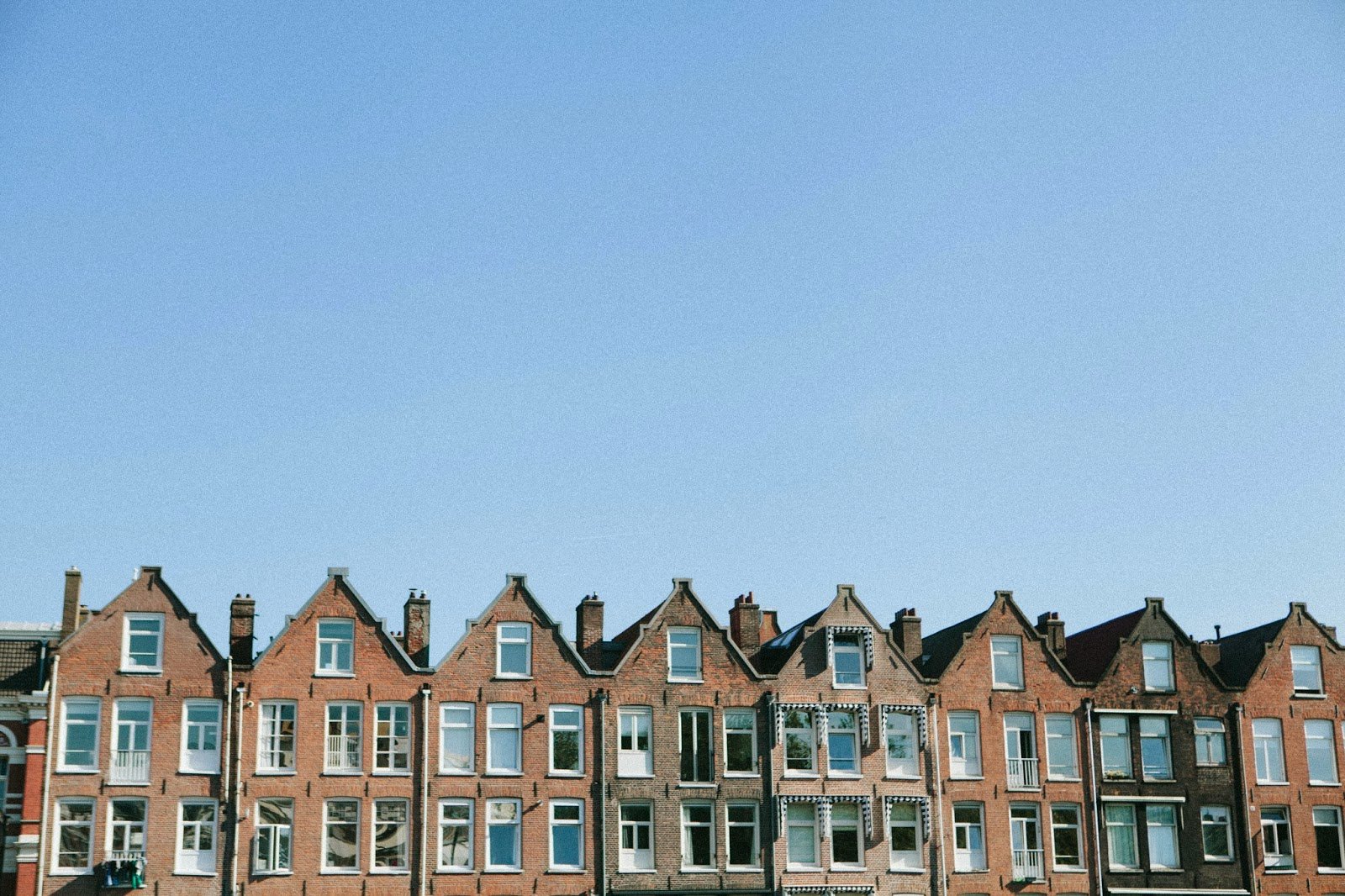 I spent the last week and a half visiting friends and family both in the Netherlands and England. Truthfully, I didn’t do too many touristy things, having been to both countries several times before. There was a lot of catching up with each others lives and aimless wandering around the city. Although my vacation was uneventful by definition, the easygoing change of pace was definitely a welcome break to my usual, frenetic everyday life.

I ended up visiting four cities — the Hague and Amsterdam in the Netherlands, as well as Brighton and London in England. Photos and some food recommendations down below: 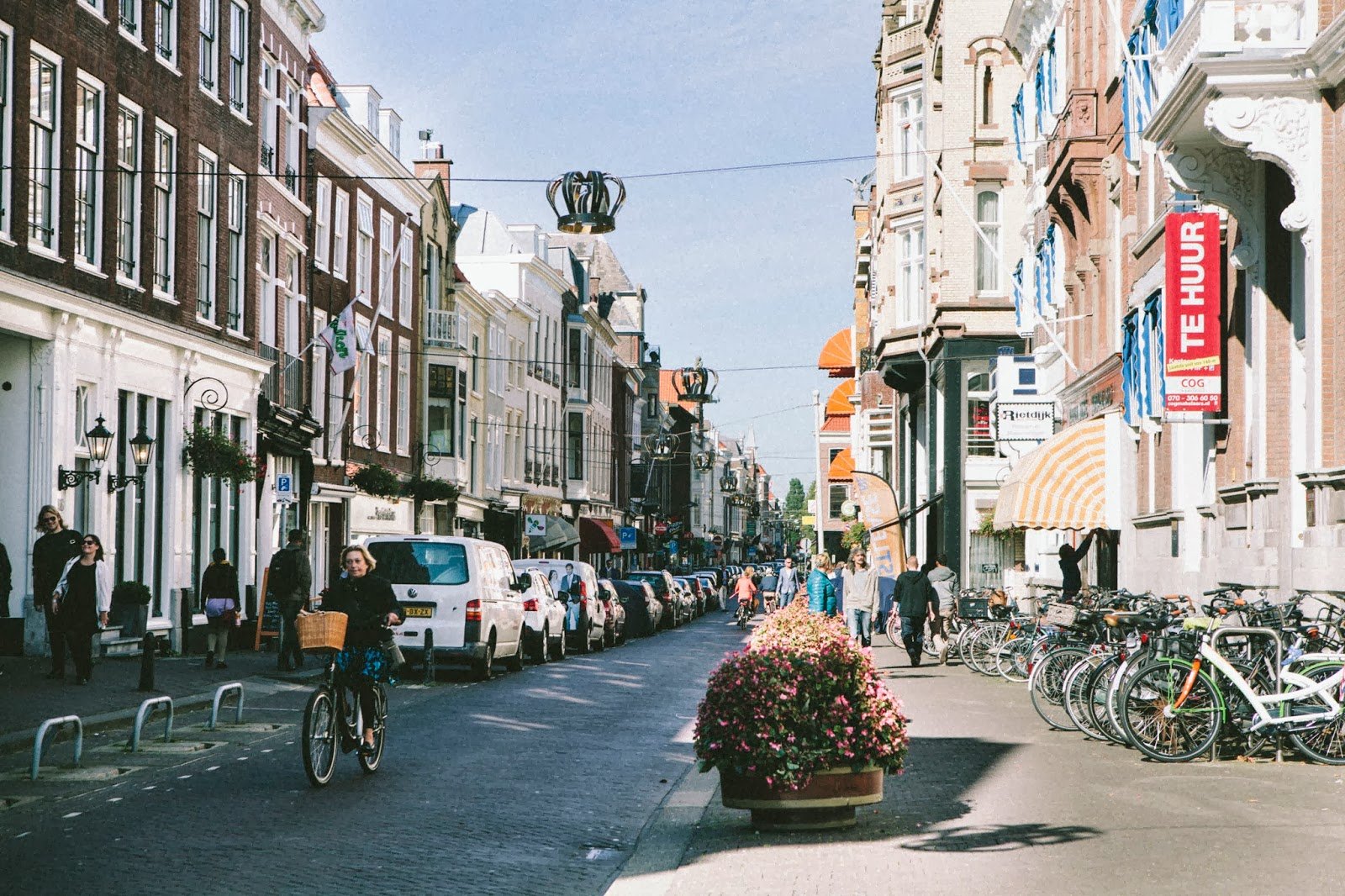 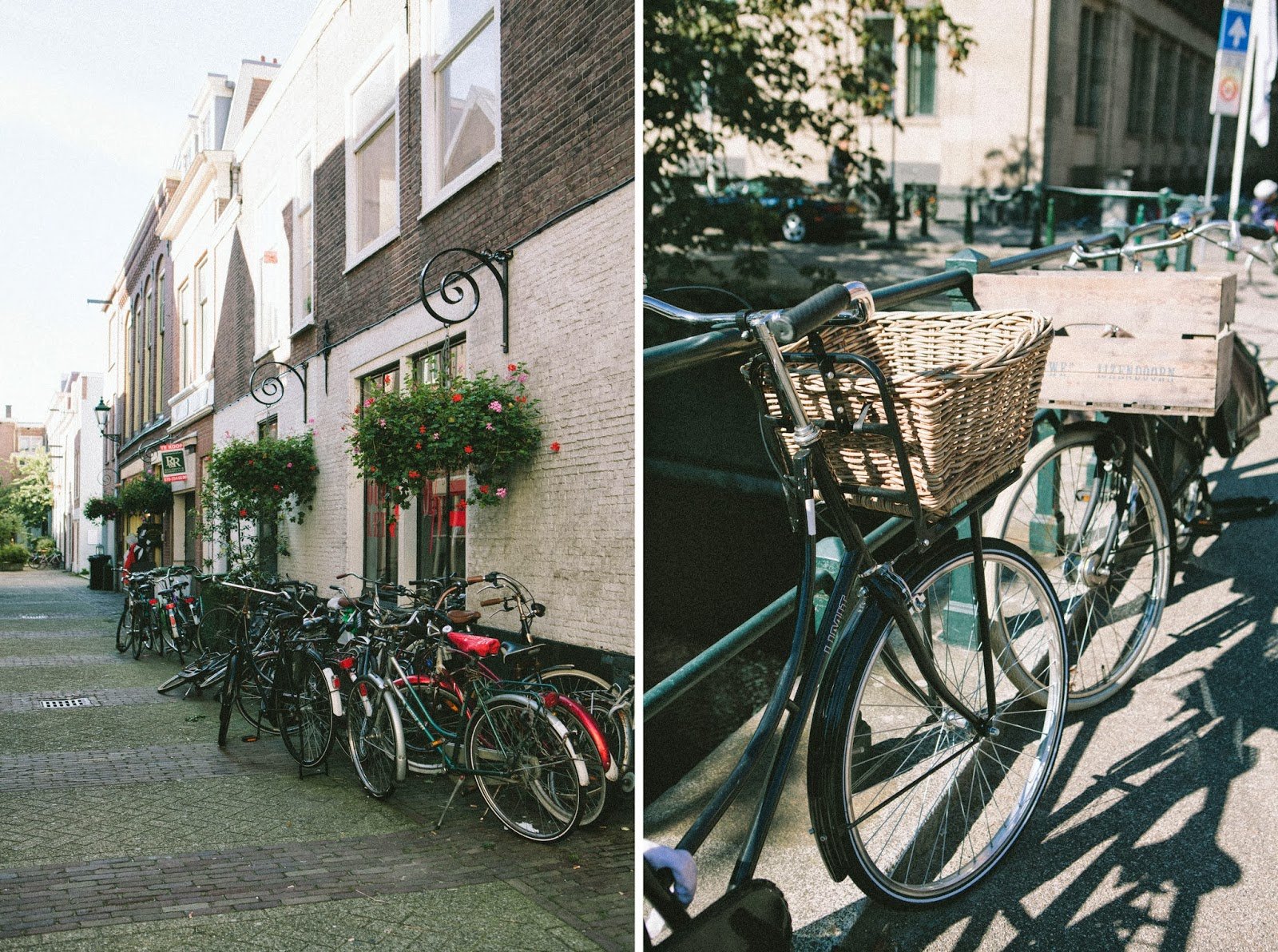 The Hague is admittedly a little bit of a sleepy town; there’s not much to do there in terms of touristy things, but I have a soft spot in my heart for the city because it’s where I spent some of my childhood years. Despite its sleepyness, I maintain that it’s a beautiful and idyllic little town filled with lots of trees, brick lane avenues and vintage bicycles.

My parents and I took some time to go to a pancake house for lunch one day. Pancakes are a big thing in the Netherlands. Unlike in the US, they are a lunch time food and often come with savory toppings like bacon, ham and cheese. You can tell from the pictures below that Dutch pancakes are traditionally thinner and flatter than American pancakes — I liken them to a heartier crepe: 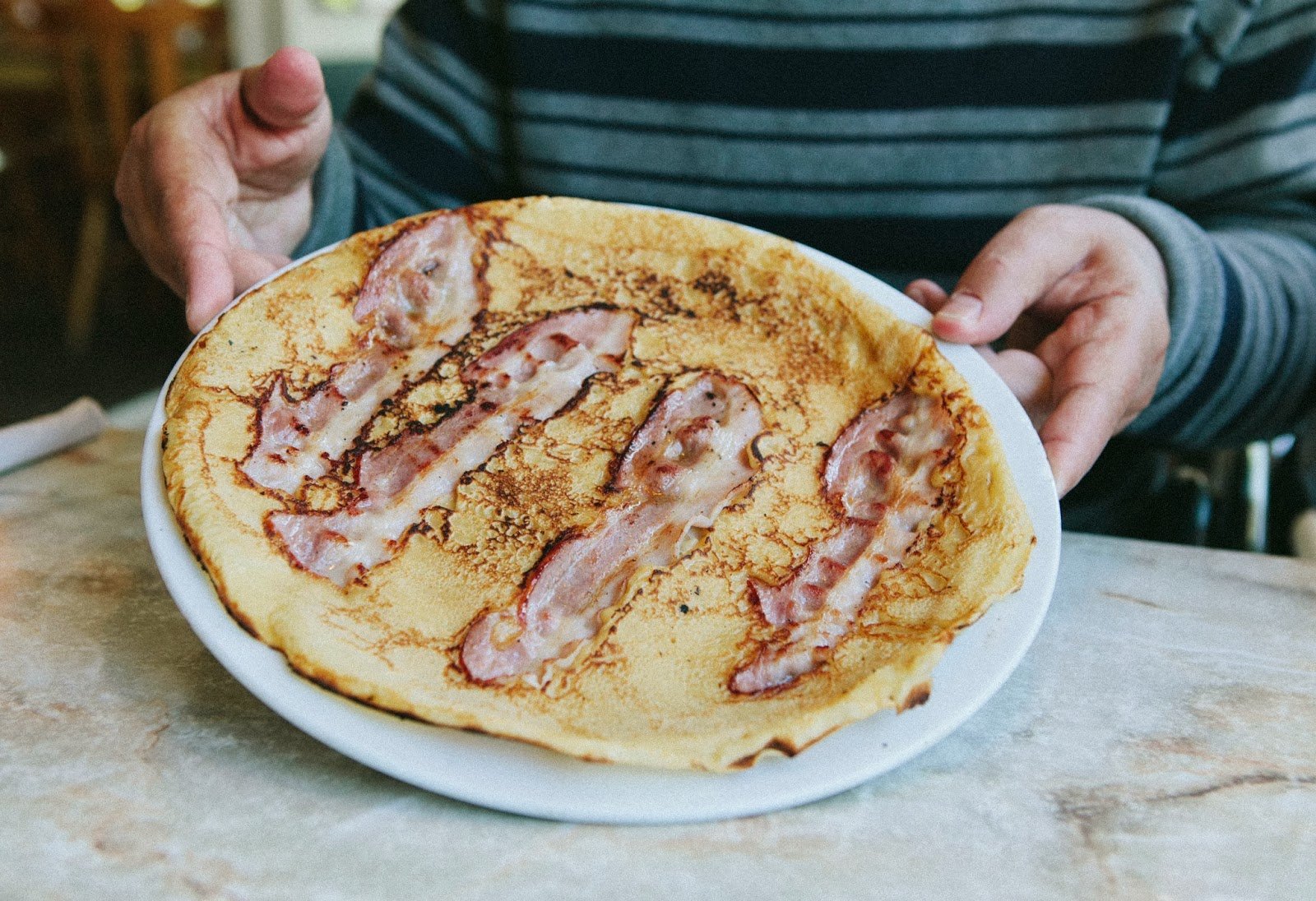 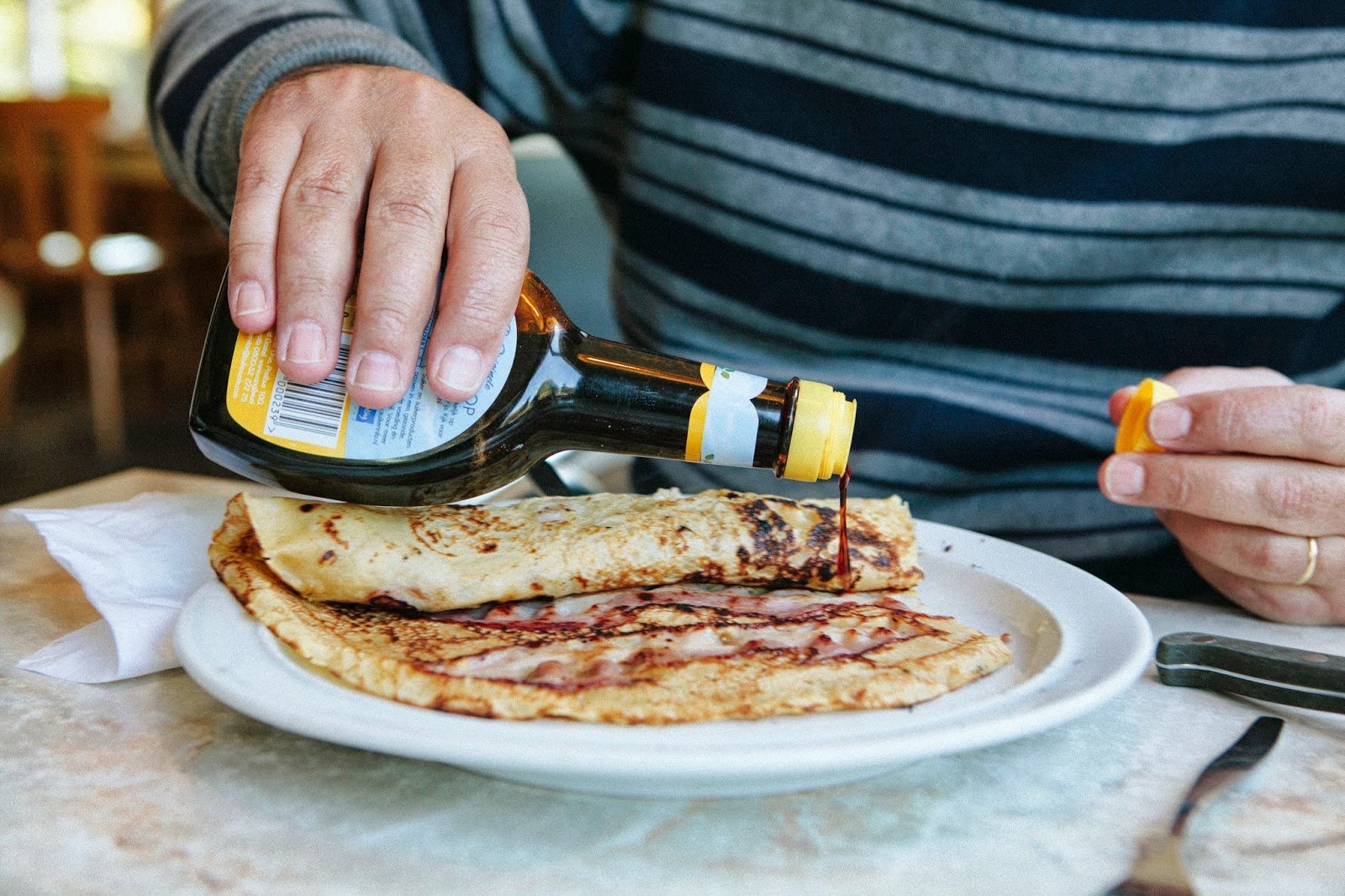 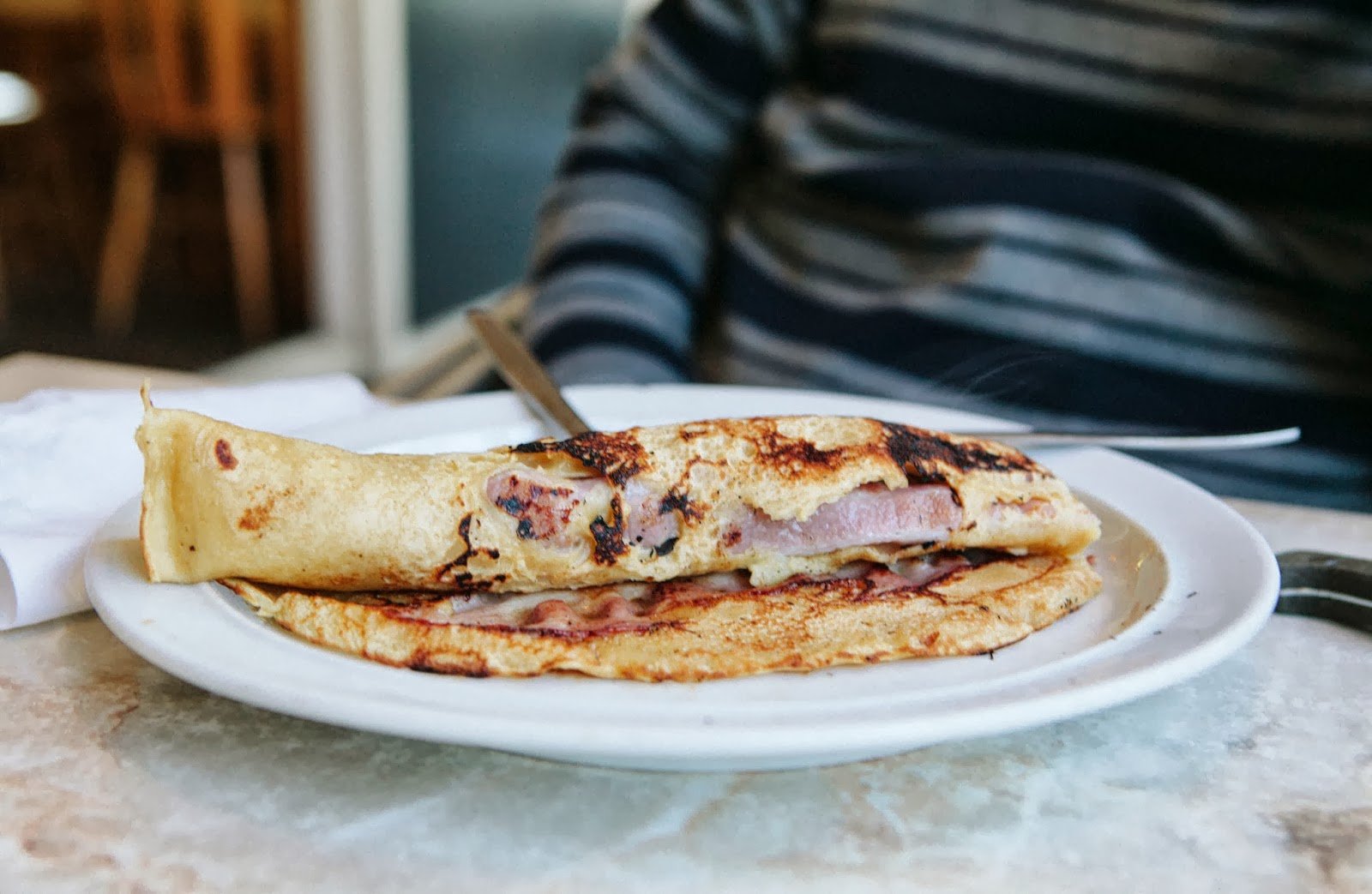 That’s my dad up top, demonstrating how to eat a Dutch pancake properly. Despite the fact that he chose a savory topping (bacon), he still layers on a generous portion of syrup (Dutch syrup is thicker than American syrup, and contains a healthy amount of molasses) before proceeding to roll it up as a log and eating it with his hands.
Instead of pancakes, however, I opted for poffertjes: 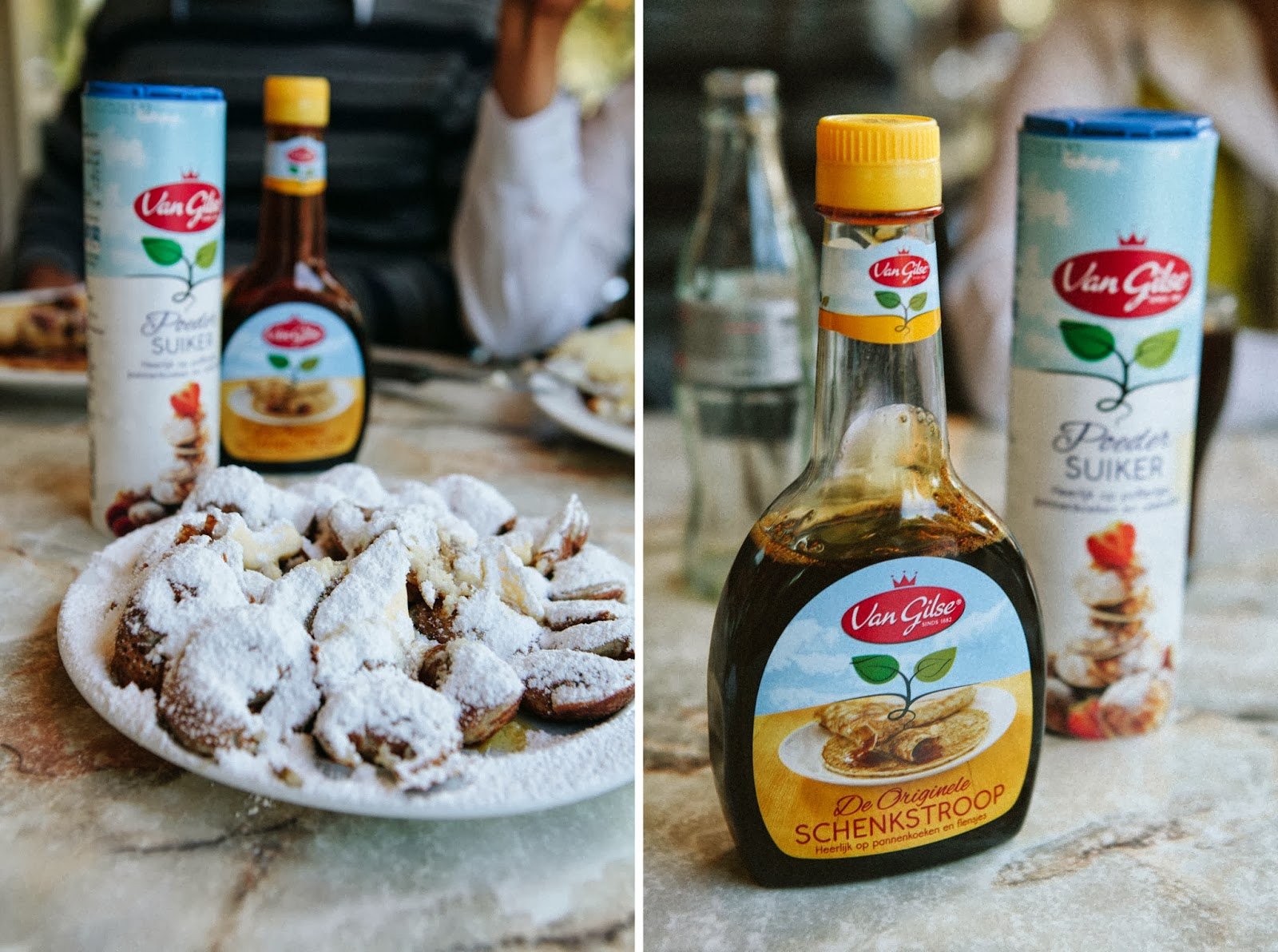 What are poffertjes? Think of them as miniature pancakes, similar to American silver dollar pancakes. However, instead of traditional pancake batter, poffertjes are traditionally made with buckwheat and raised with yeast, and fried in a special cast iron pan with individual round cavities for each poffertje. As you can tell from the picture above, poffertjes are served with a generous portion of powdered sugar, butter, and of course, molasses syrup.
And finally, here is a picture of my parents being cuties: 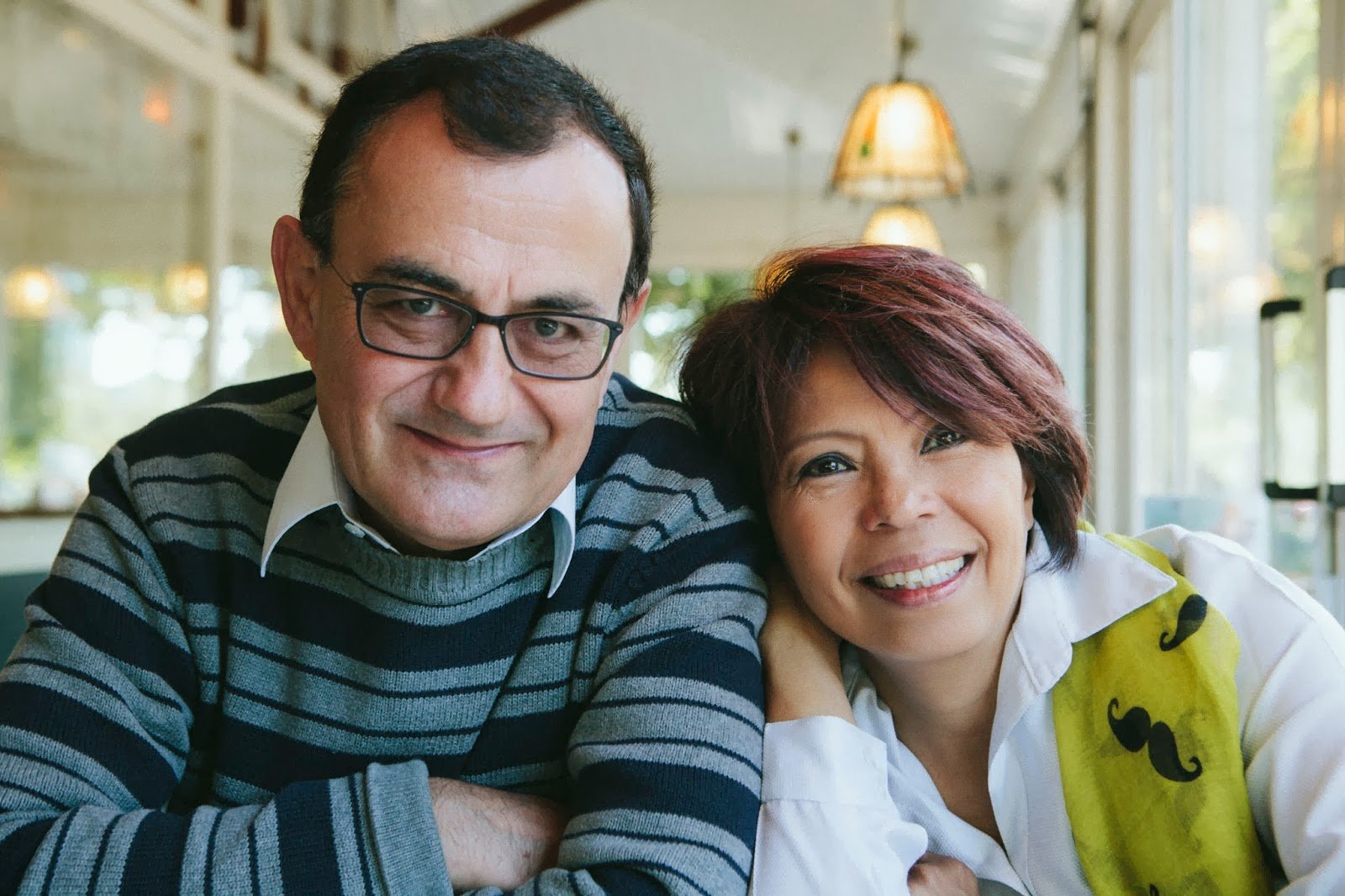 Please note that my mom is rocking a neon green mustache scarf. That’s all I have to say about that.
Recommendations: 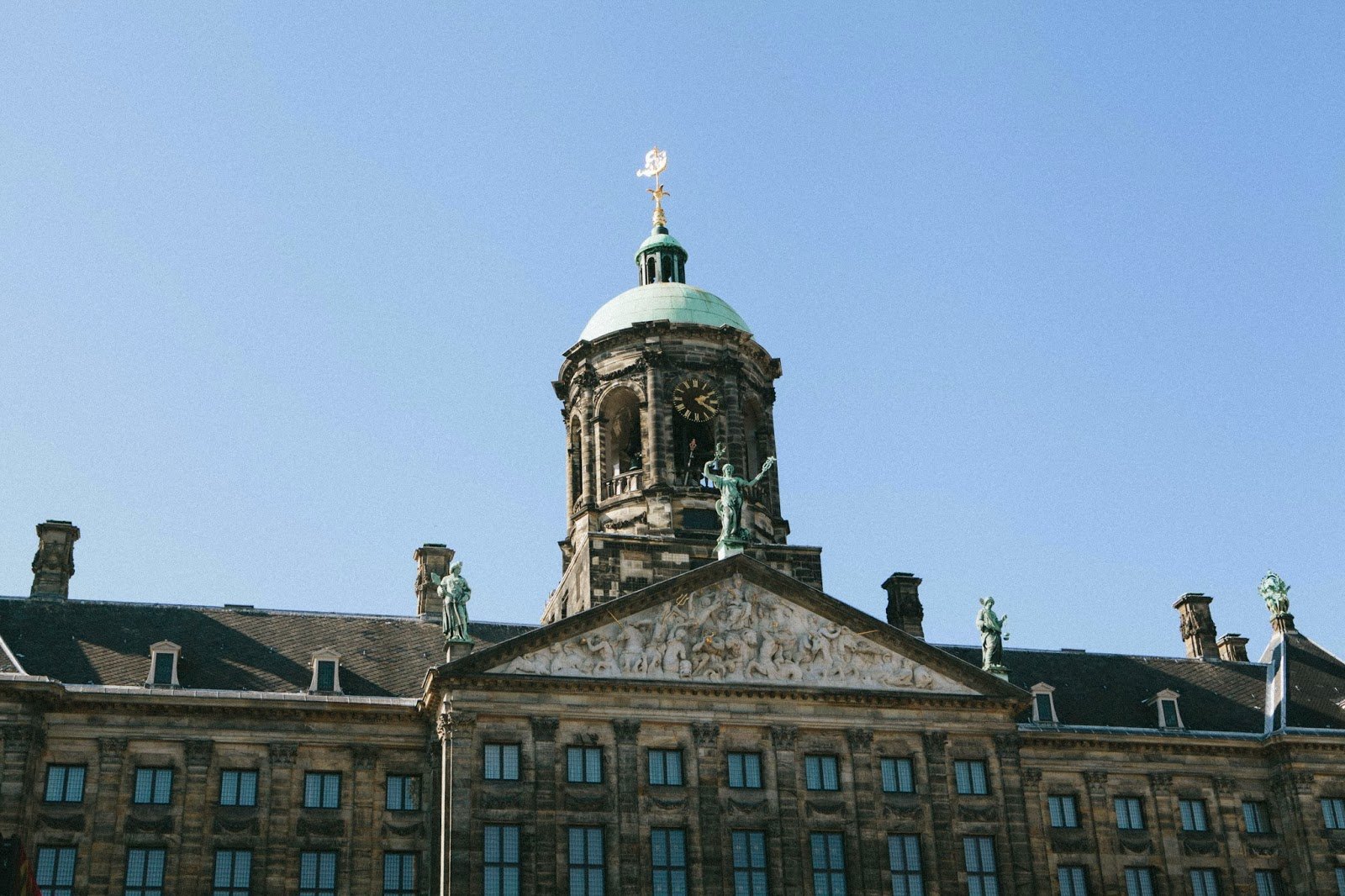 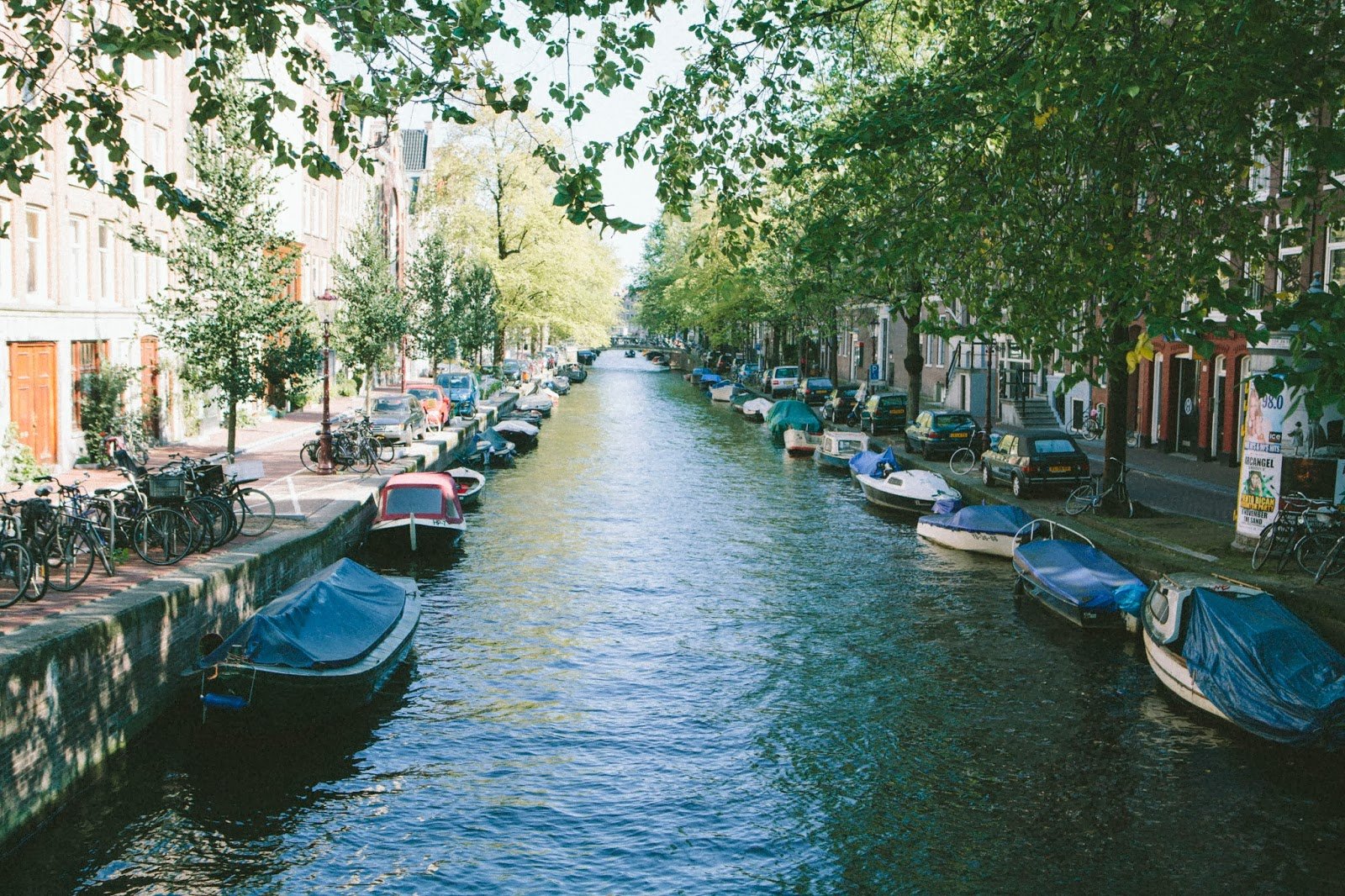 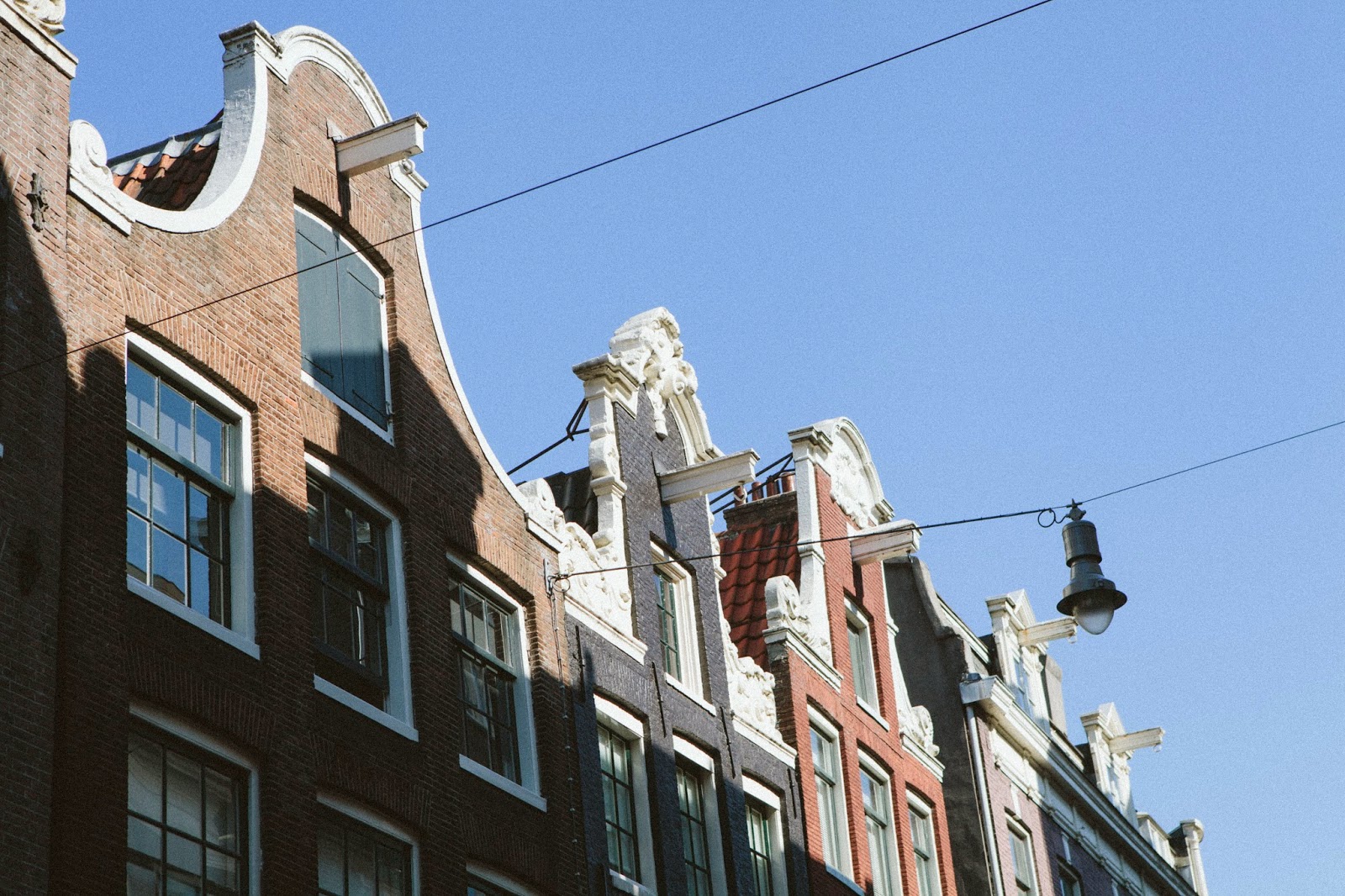 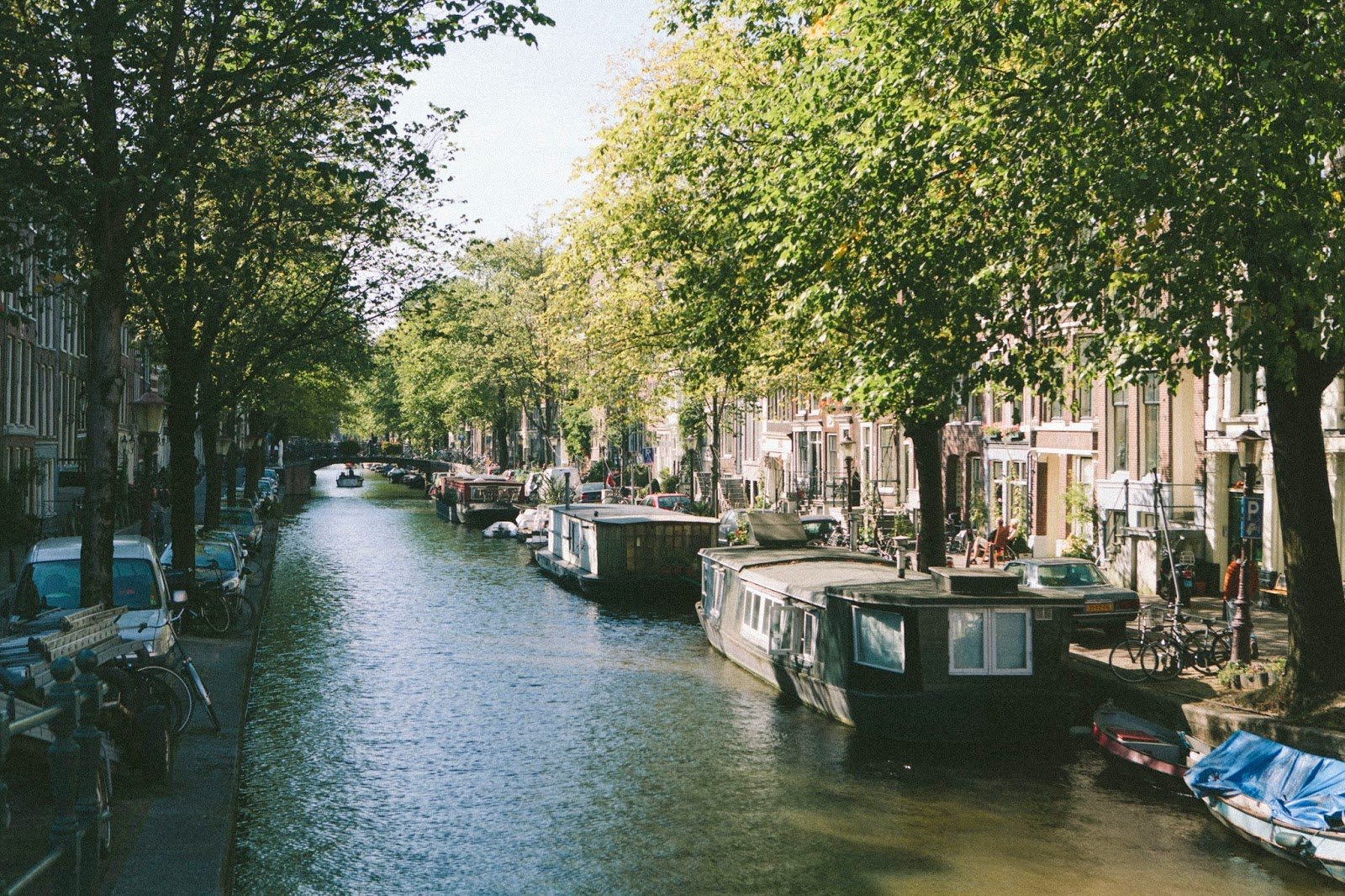 Amsterdam is definitely one of my favorite cities in Europe. It’s a big city with a small town feel, mostly due to its tree-lined cobble streets and canal avenues. There’s a lot to do and see in the city, but unfortunately I was only there for a day and spent it just wandering around. I definitely had my fair share of snacks, though: 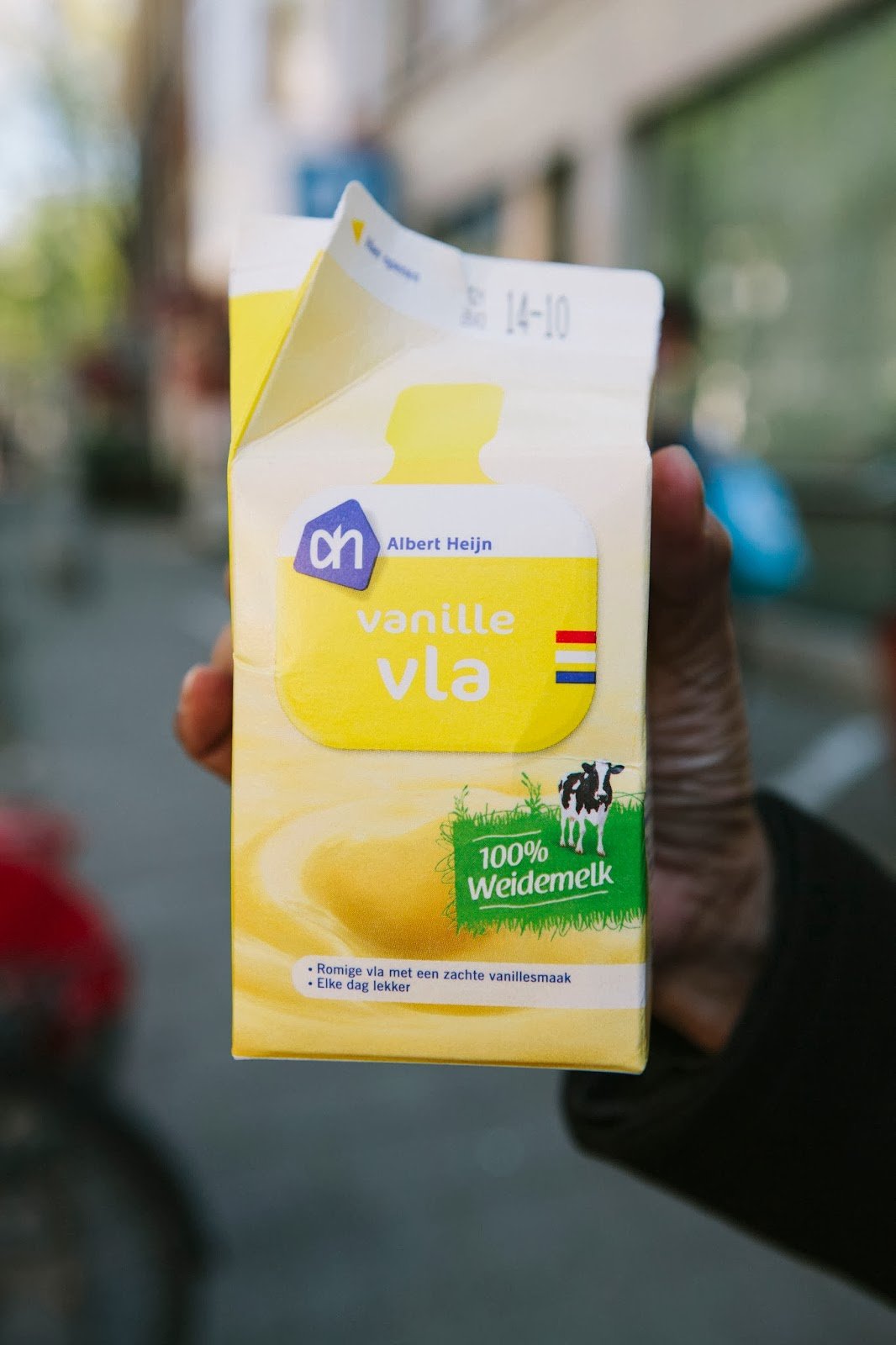 That, my friends, is a carton of vanilla vla. Yes, there’s actually a food called vla. What is it? Simply, it’s a custard… well, sort of. It’s the Dutch version of custard — thinner, with the texture and viscosity of yogurt, and slightly less sweet than typical custard (but sweeter than yogurt). Back in the day, it used to be served with breakfast! Often, vla is sold in pints and comes in different flavors (vanilla, chocolate, and strawberry), but I’m partial to vanilla. My family watched me in horror as I drank the stuff straight from the box as we walked around Amsterdam. Oh, to be a dessert blogger.
After downing my pint of vla, I felt a hankering for something savory. We made a quick pit stop for some Dutch fries and mayonnaise: 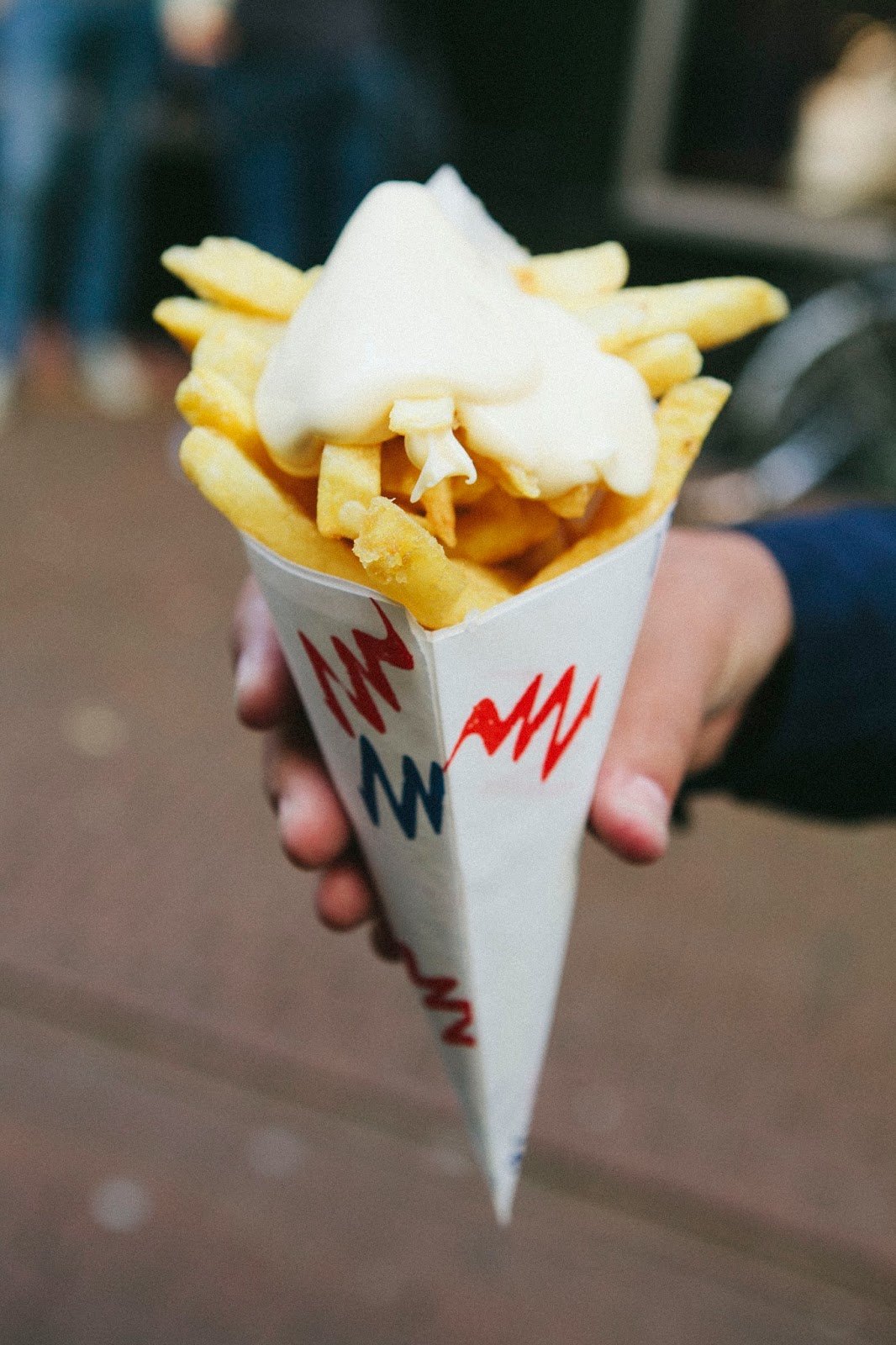 Fries with mayonnaise (frites met fritessaus) is a traditional Dutch snack. Dutch fries are thicker and larger than American fries and often less salty, and is topped off by a generous serving of fritessaus. Fritessaus is a Dutch mayonnaise that is specifically made for fries and tends to be thicker and more lemony than American mayonnaise — I liken it to a very subtle lemon aioli. I can’t get enough of that stuff.
The frites stand that we went to was tucked away in an alley, and, if my shoddy Dutch isn’t mistaken (though it probably is), had the phrase “Sauce Master” in its name: 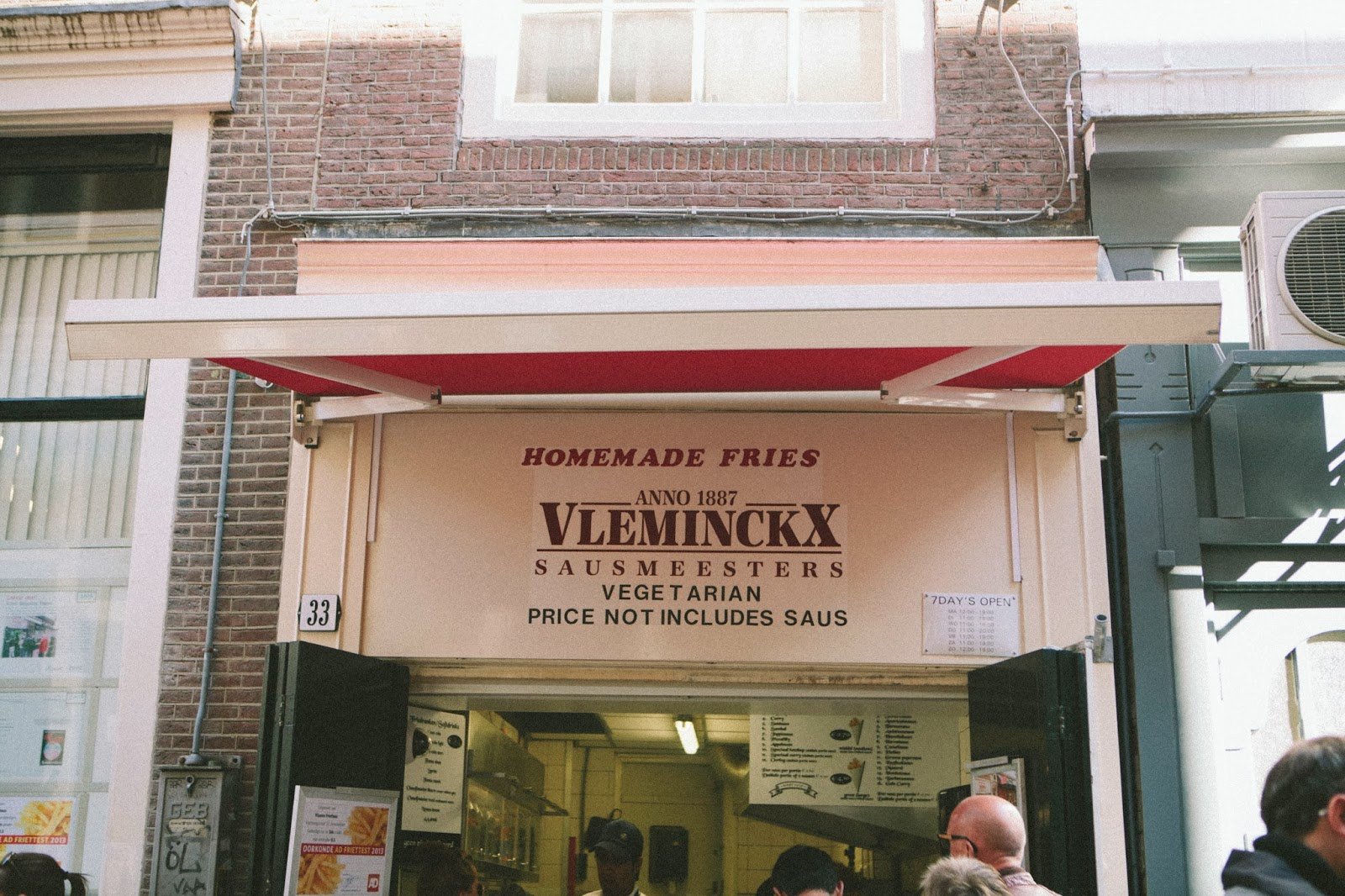 Please note that the price of a cone of fries does not include saus. ;-D
After our chippy stop, my mom decided that she wanted something sweet to eat again. Lo and behold, just as she had announced that, we had just strolled by a rather inviting patisserie filled with beautiful desserts and my personal favorite pastry of all time, macarons: 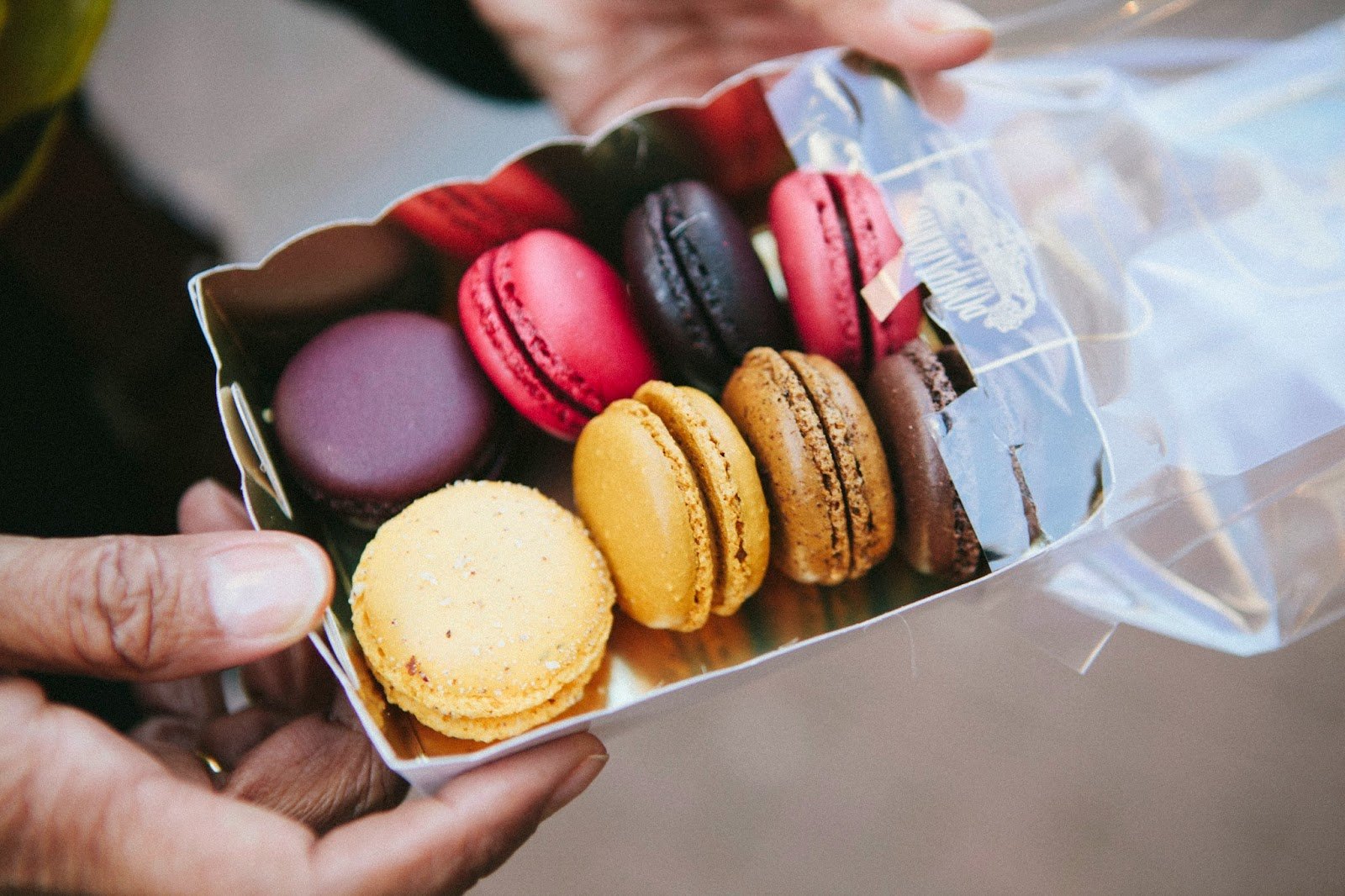 Adorable, right? Satisfied with our snacks, my family and I continued our aimless wandering of the city: 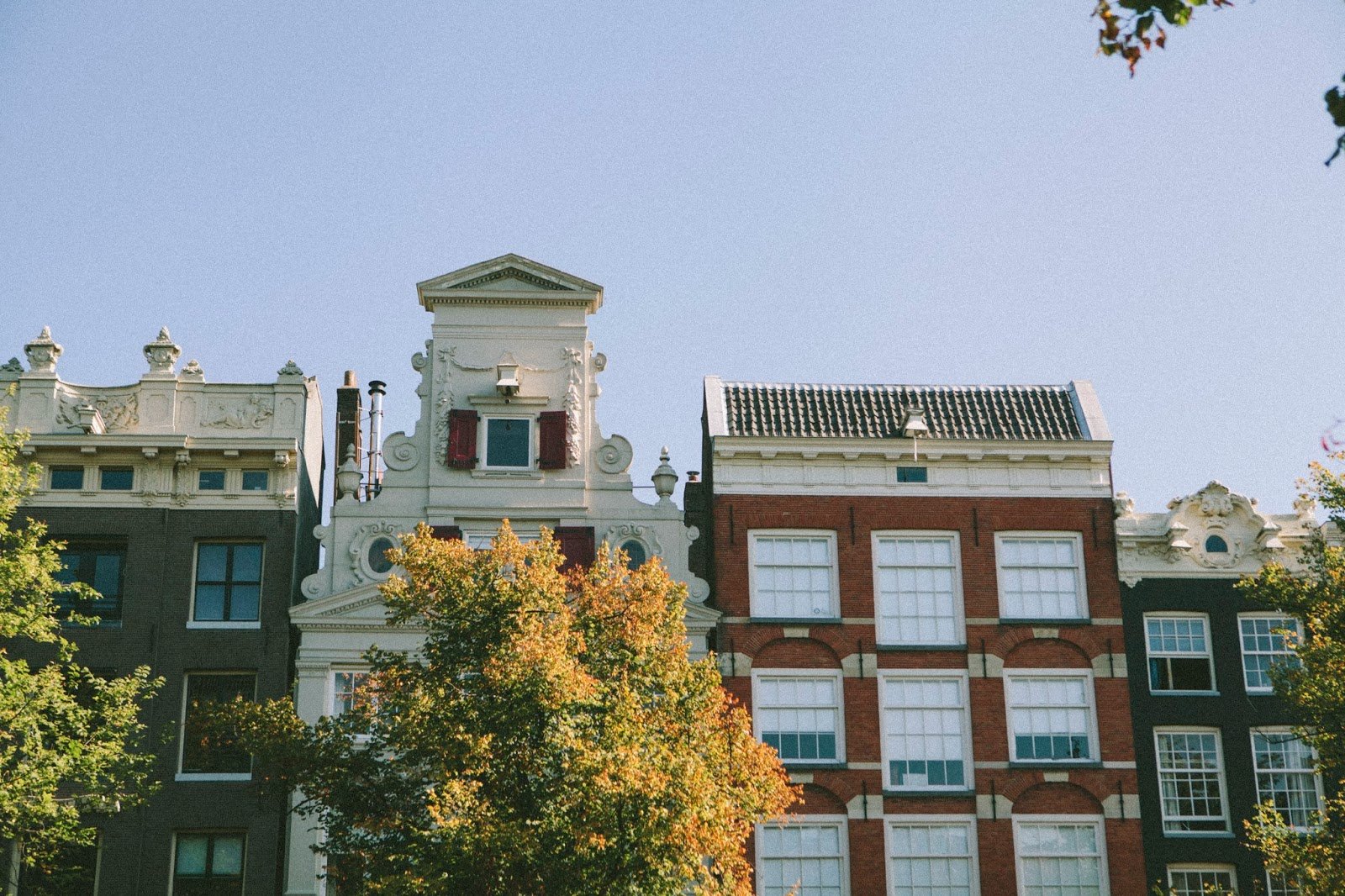 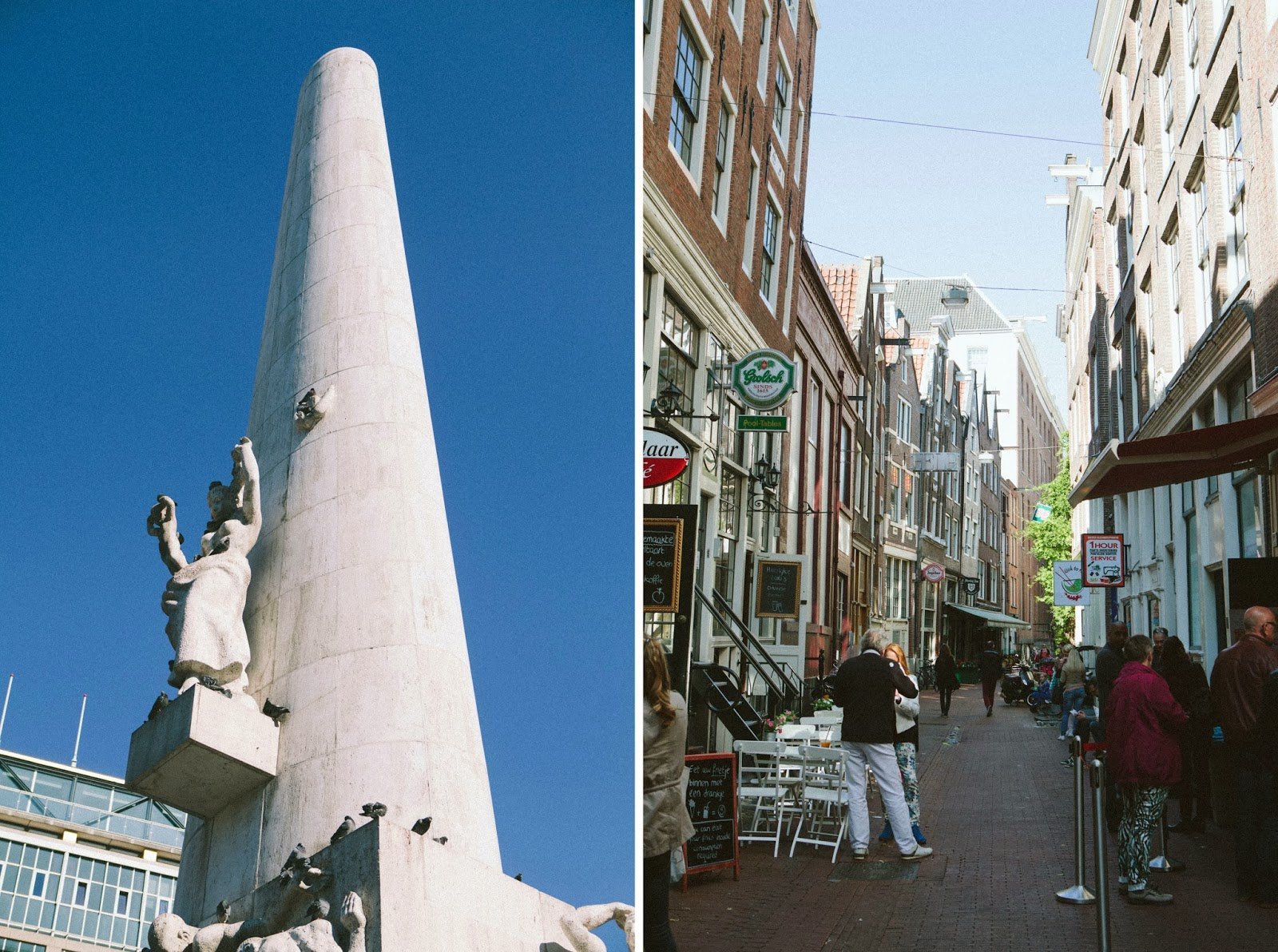 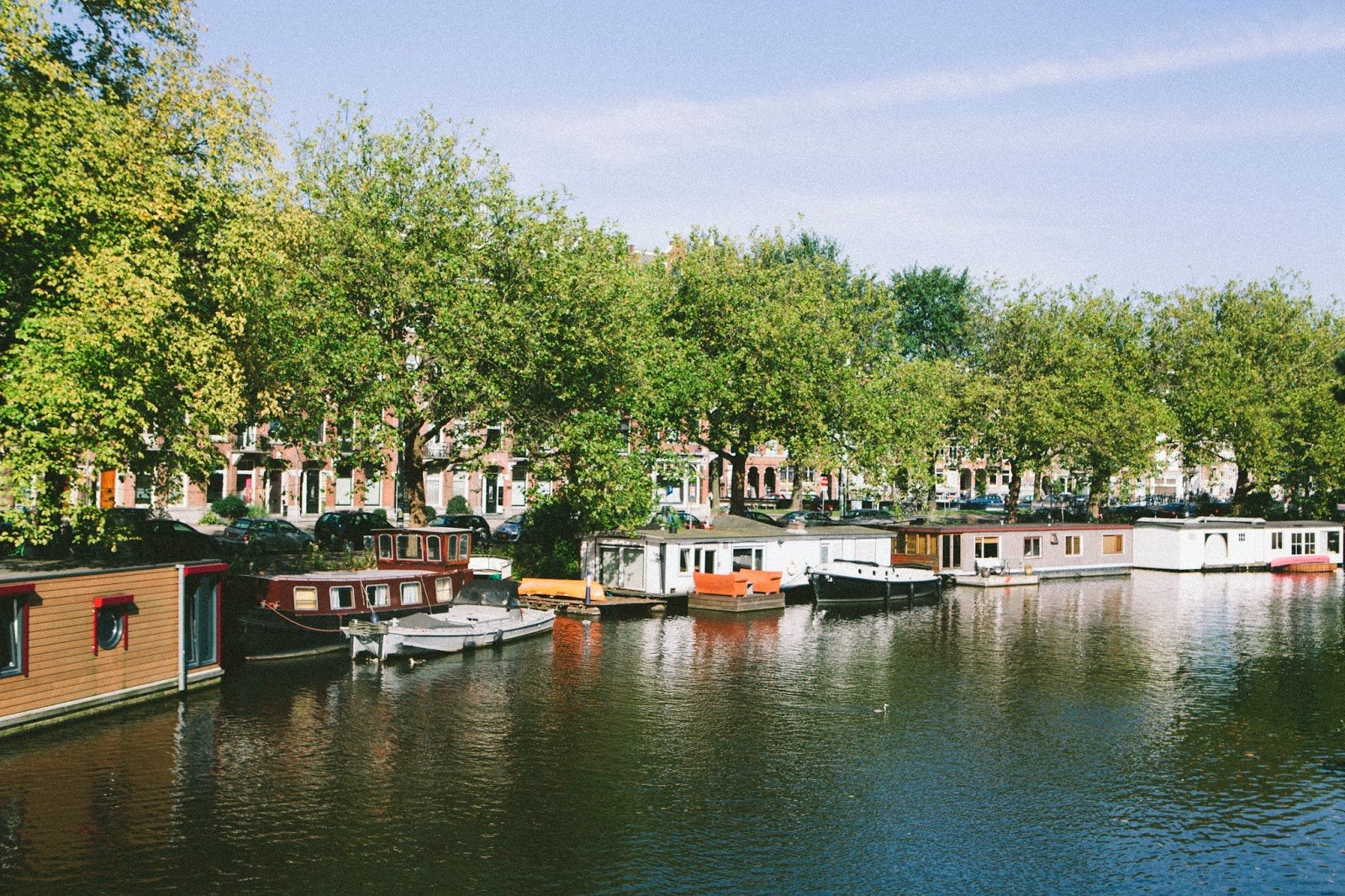 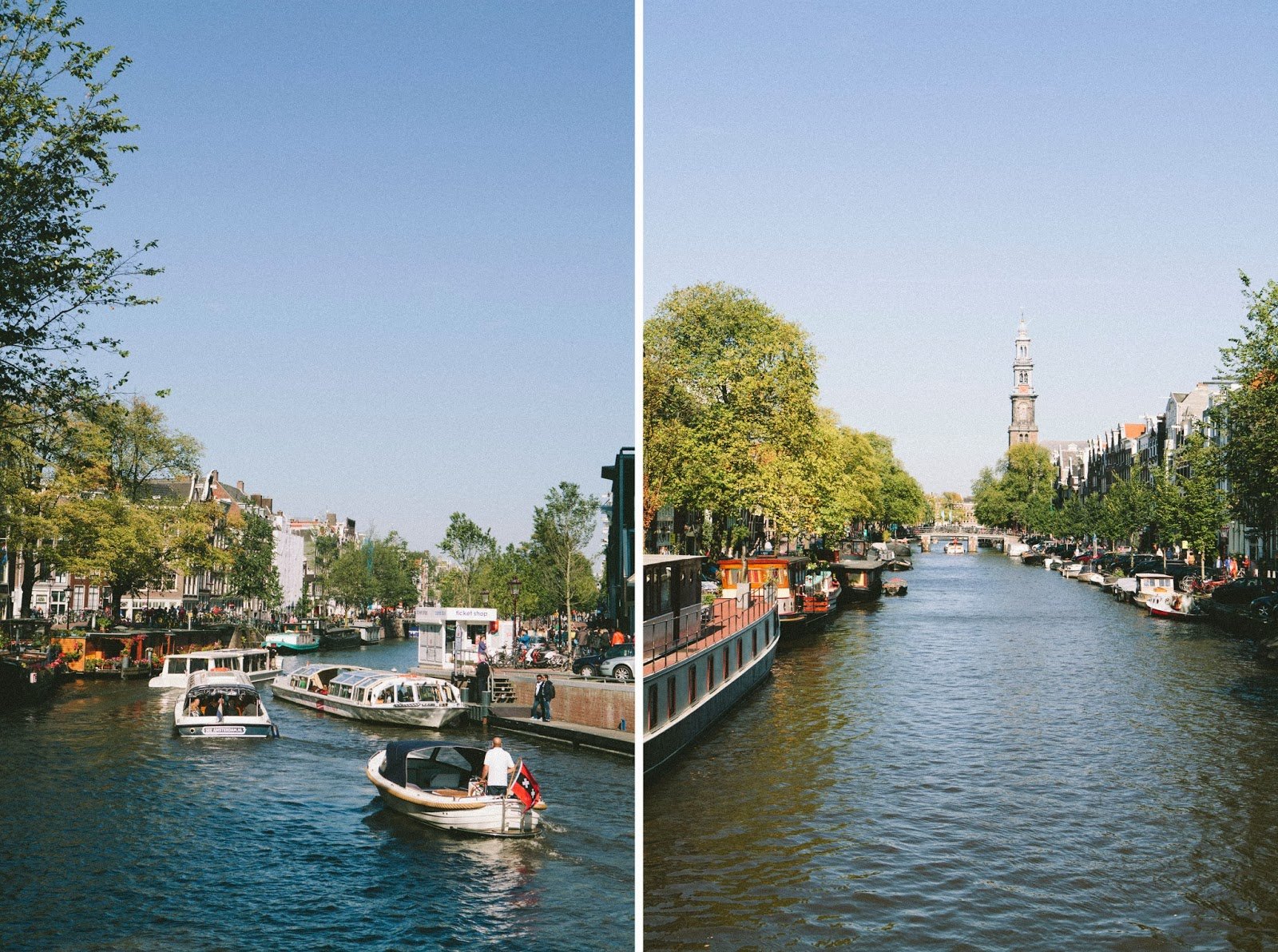 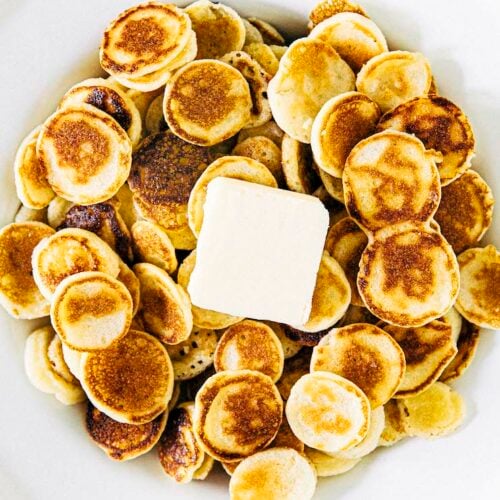