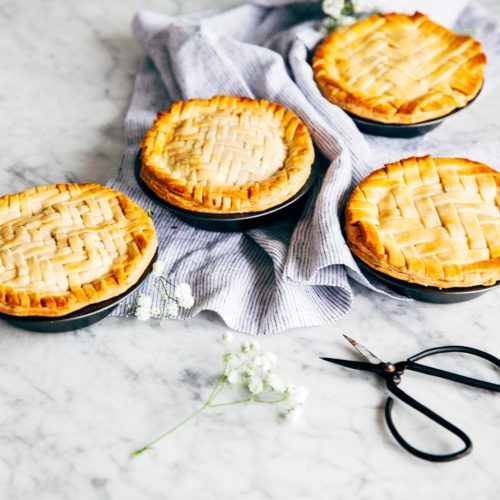 A few weeks ago, I headed to my friend Erin’s apartment to weave these beautiful, herringbone mini pies. She’d posted a beautiful, regular-scale version of a herringbone lattice pie the week before and I hadn’t been able to stop staring at the photo. I kept trying to reverse engineer the pattern in my head. I […] 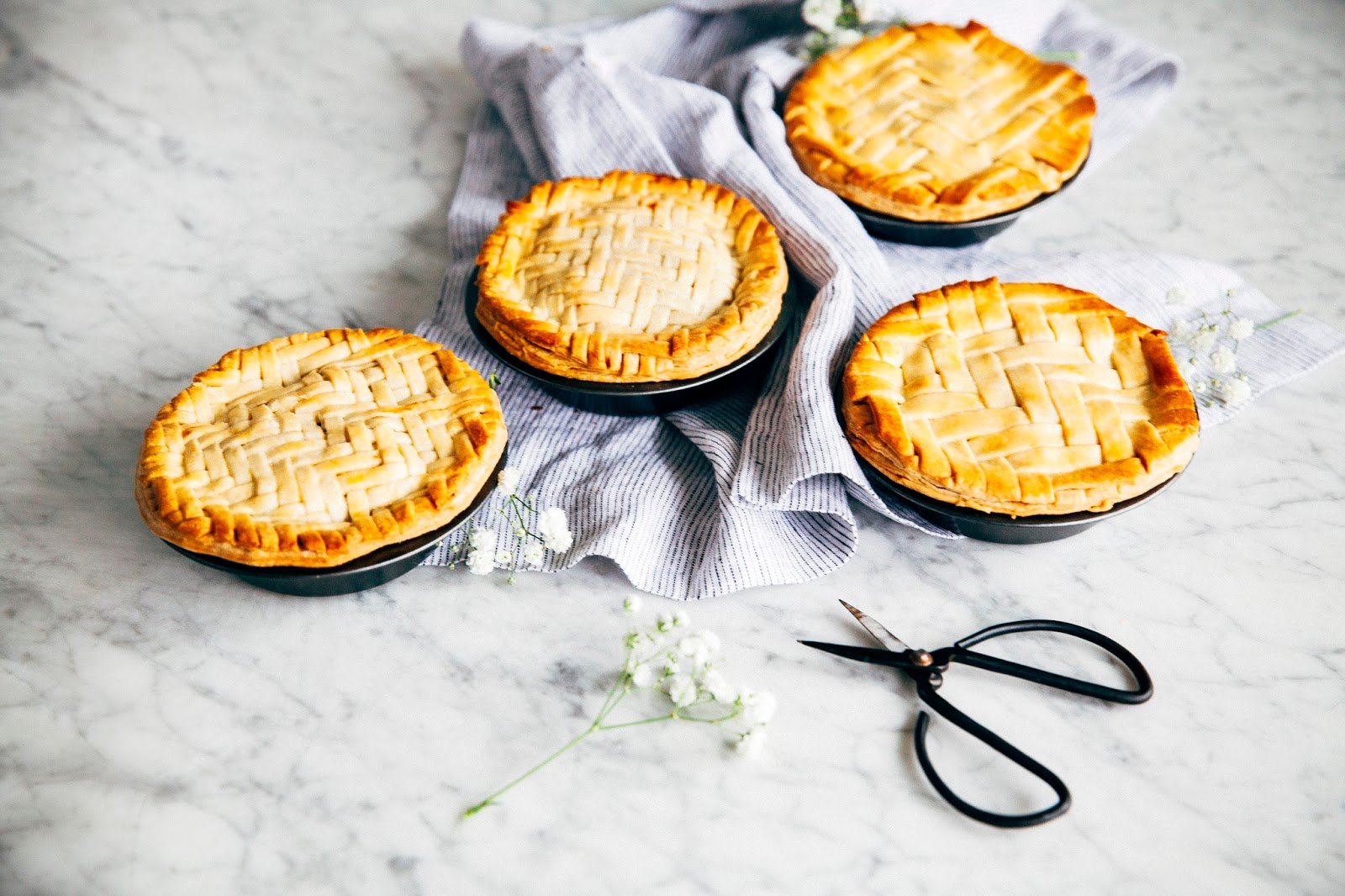 A few weeks ago, I headed to my friend Erin’s apartment to weave these beautiful, herringbone mini pies. She’d posted a beautiful, regular-scale version of a herringbone lattice pie the week before and I hadn’t been able to stop staring at the photo. I kept trying to reverse engineer the pattern in my head. I thought I’d figured out everything there was to do with pies, you see. I’d spent the last year baking a pie a month, a project that had exposed me to a variety of pie making styles and lattice crusts. But it turns out that I’d missed this one. Finally, I texted her, inviting myself over: “Teach me your ways!” 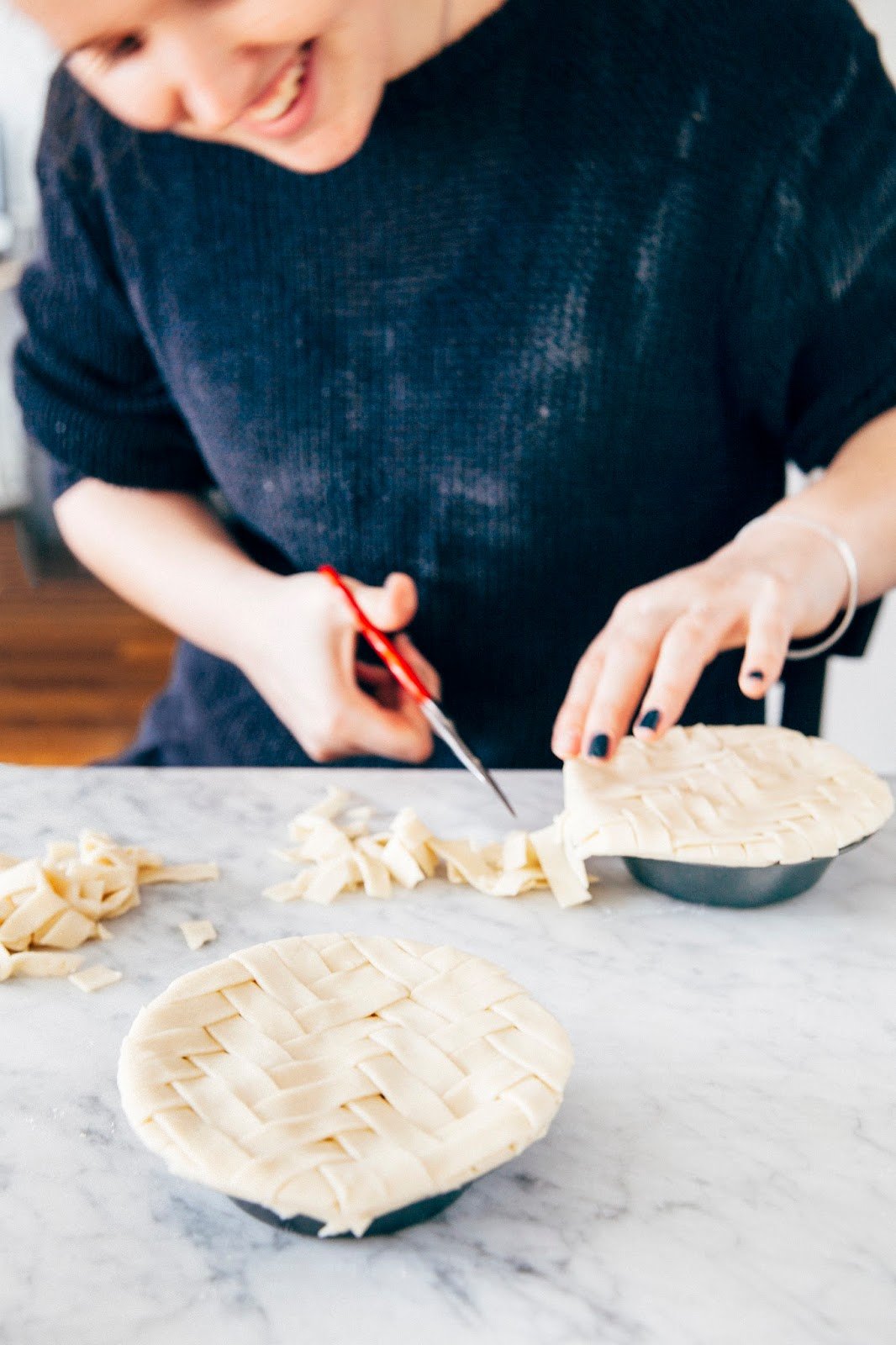 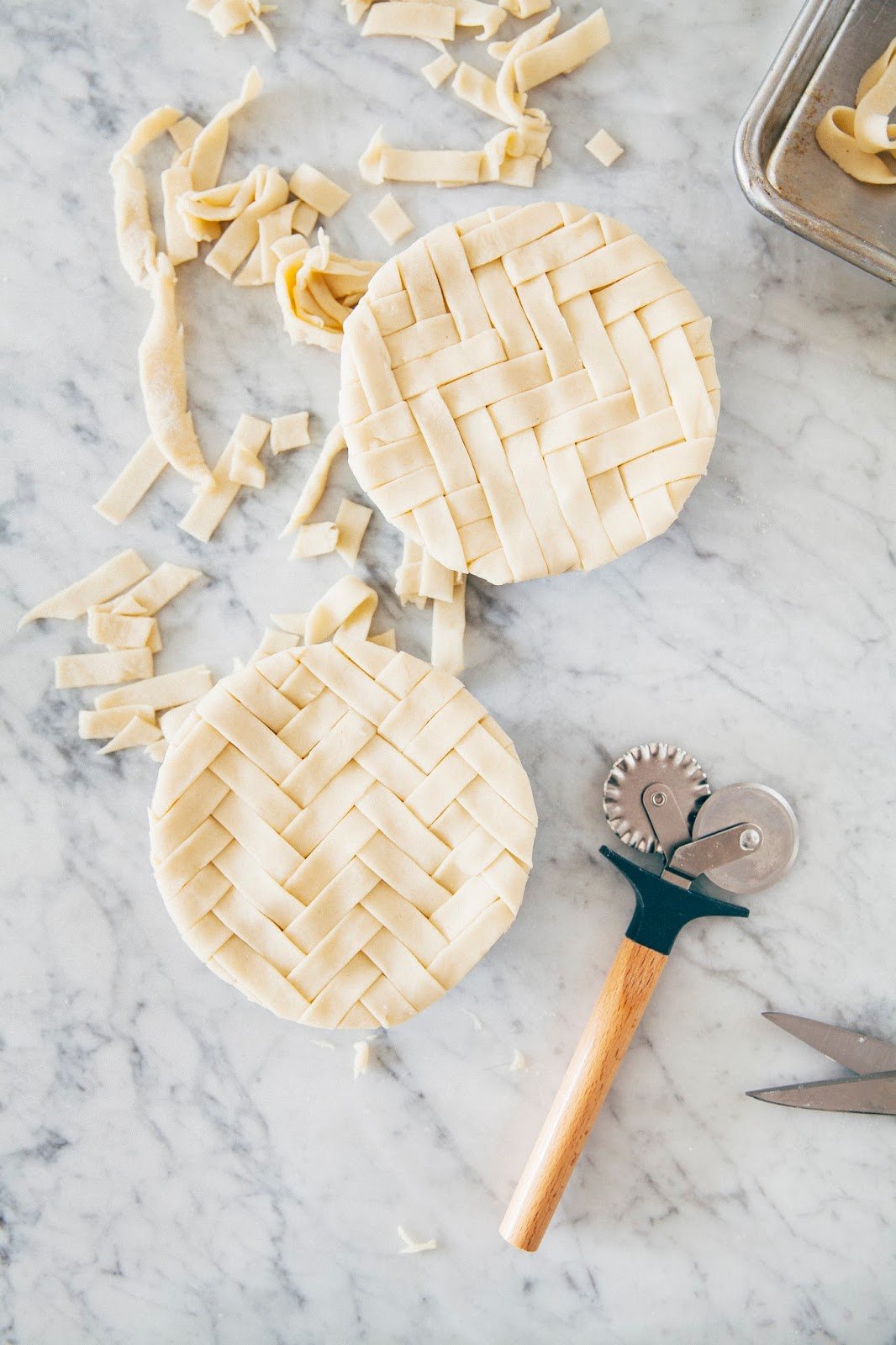 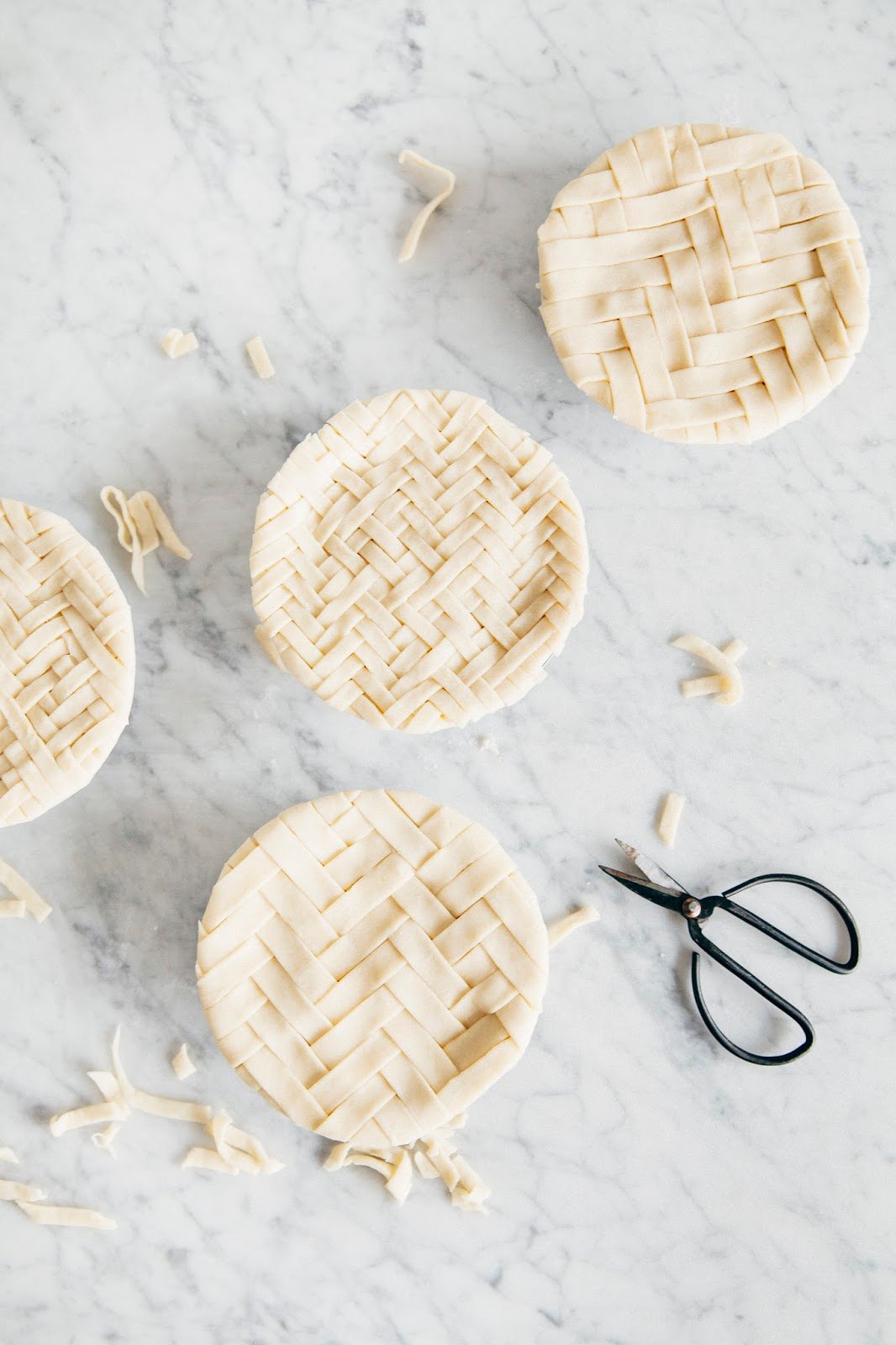 It was a gloomy Saturday, and I arrived at Erin’s bright, plant-filled apartment in East Williamsburg armed with a sweetgreen salad and a bag of apples and pears from the Union Square Farmers Market. I sat, unhelpfully alternating bites between my salad and the delicious honey lavender cake she’d made the day before, as she prepped the fruit and patiently answered my questions about her apartment, the lattice we were about to make, and their upcoming trip back home to New Zealand.

Later, we both sat at her marble topped kitchen cart, ready to weave. I’d rolled out the dough and fitted them to the mini pie tins; Erin had processed the pie dough through a fettuccine machine to shape them into thin, even strips for our lattice. She pulled up Stella Parks’ herringbone lattice tutorial on Serious Eats and began reading it out loud; each of us folded and braided the pie dough to match Stella’s instructions. Rich, her husband, put on a soundtrack of the Pandora Bon Iver radio station and flitted around us every so often, taking photos of us in action. Braiding the pie wasn’t difficult, but it was absorbing, quiet work — each pie took about 20 minutes to weave. 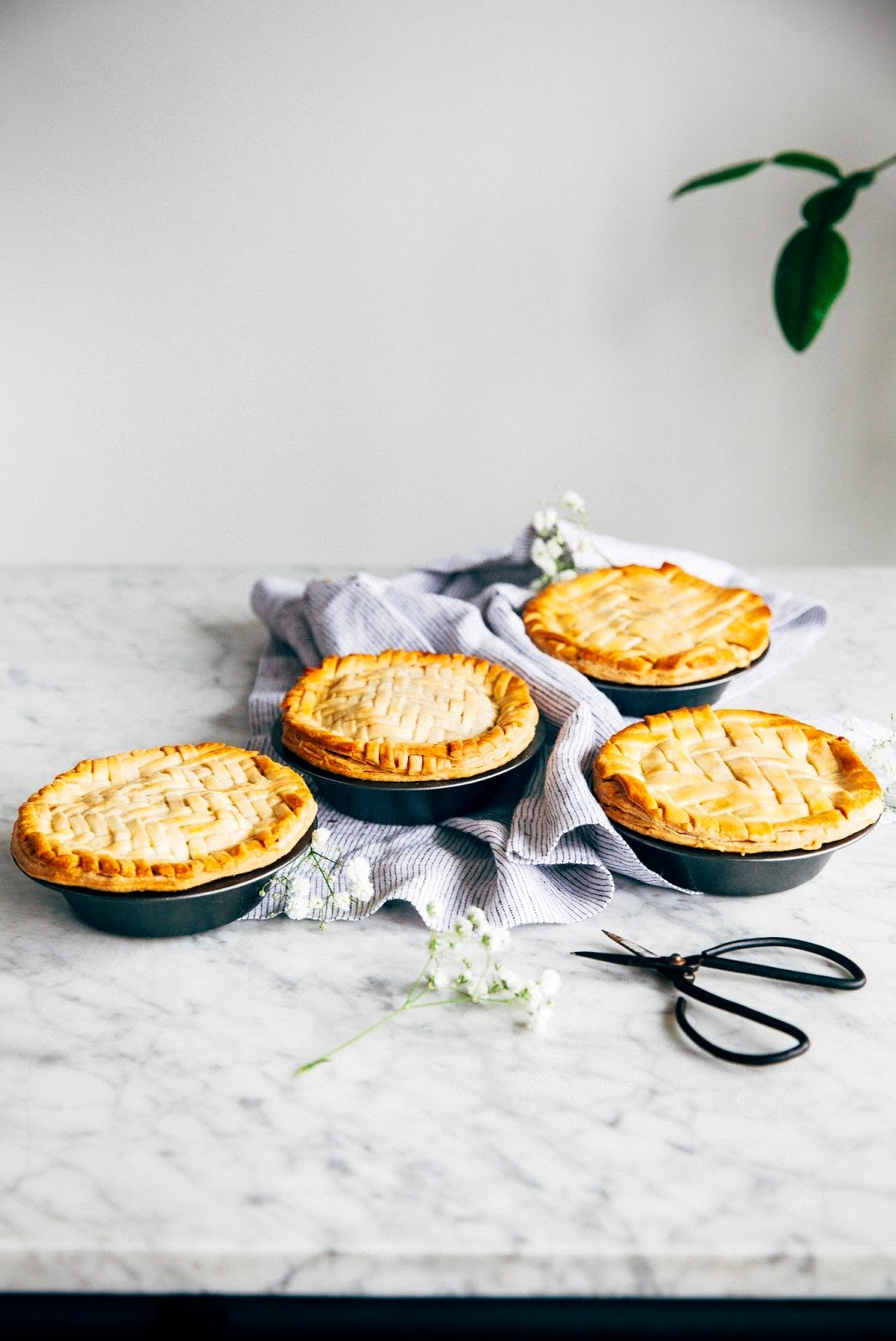 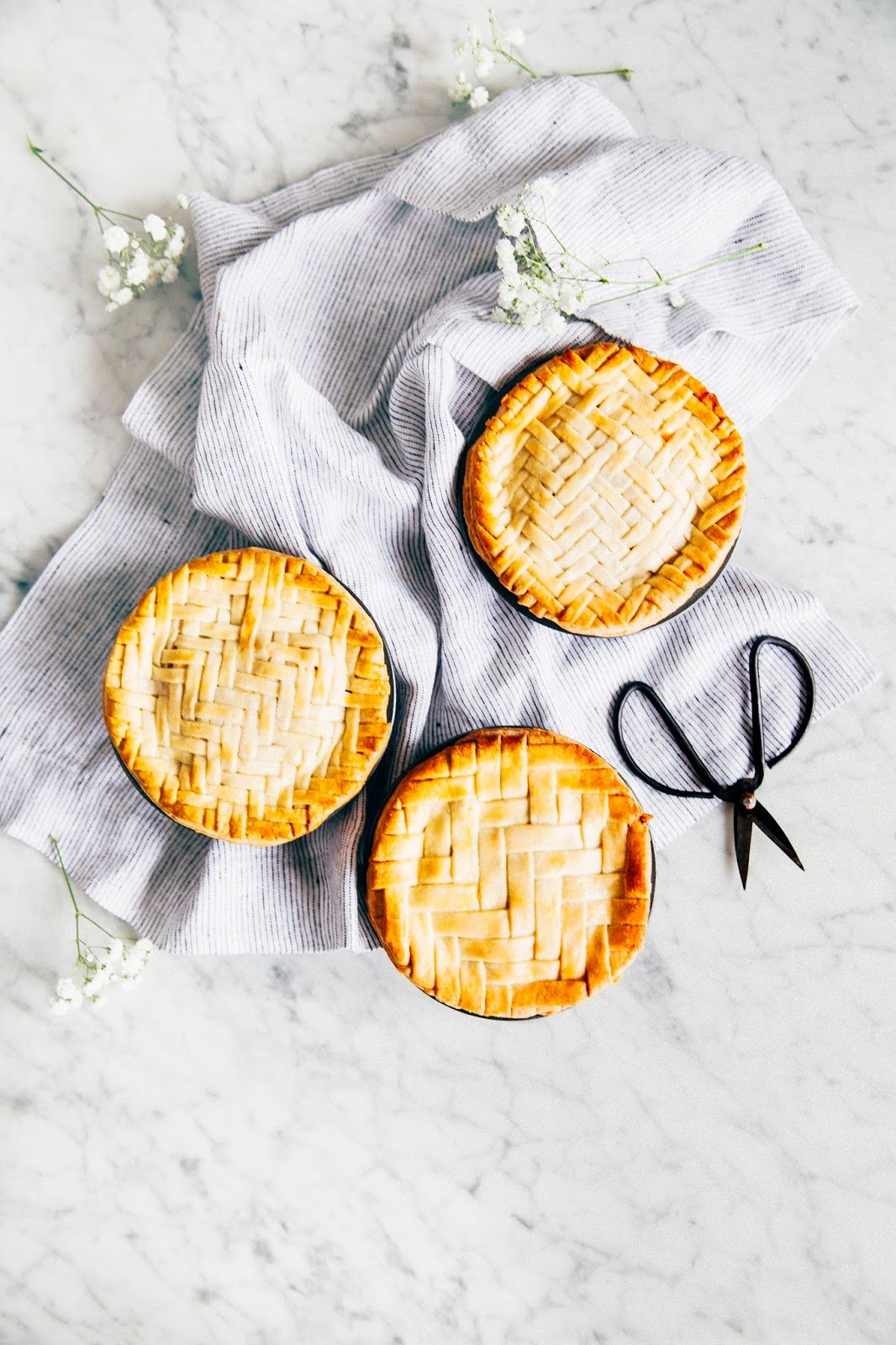 If you’re wondering why I went through a seemingly ordinary and maybe even banal day in such great detail, it’s because of this: it was wonderful.

A lot of the work that I do is solitary. Which is strange, because technically, I’m actually always talking to people. I spend the day writing emails, text messages, and leaving comments on social media. With G-chat and iMessage, I can have an entire novel’s worth of conversations with friends, coworkers, and acquaintances in an hour, during which we’ll jump back and forth between work, gossip, and something completely random, before ending up right where we started. But still. Despite (and possibly because of) all this digital conversation, I go embarrassingly long stretches at a time without having said a single word out loud to another person. 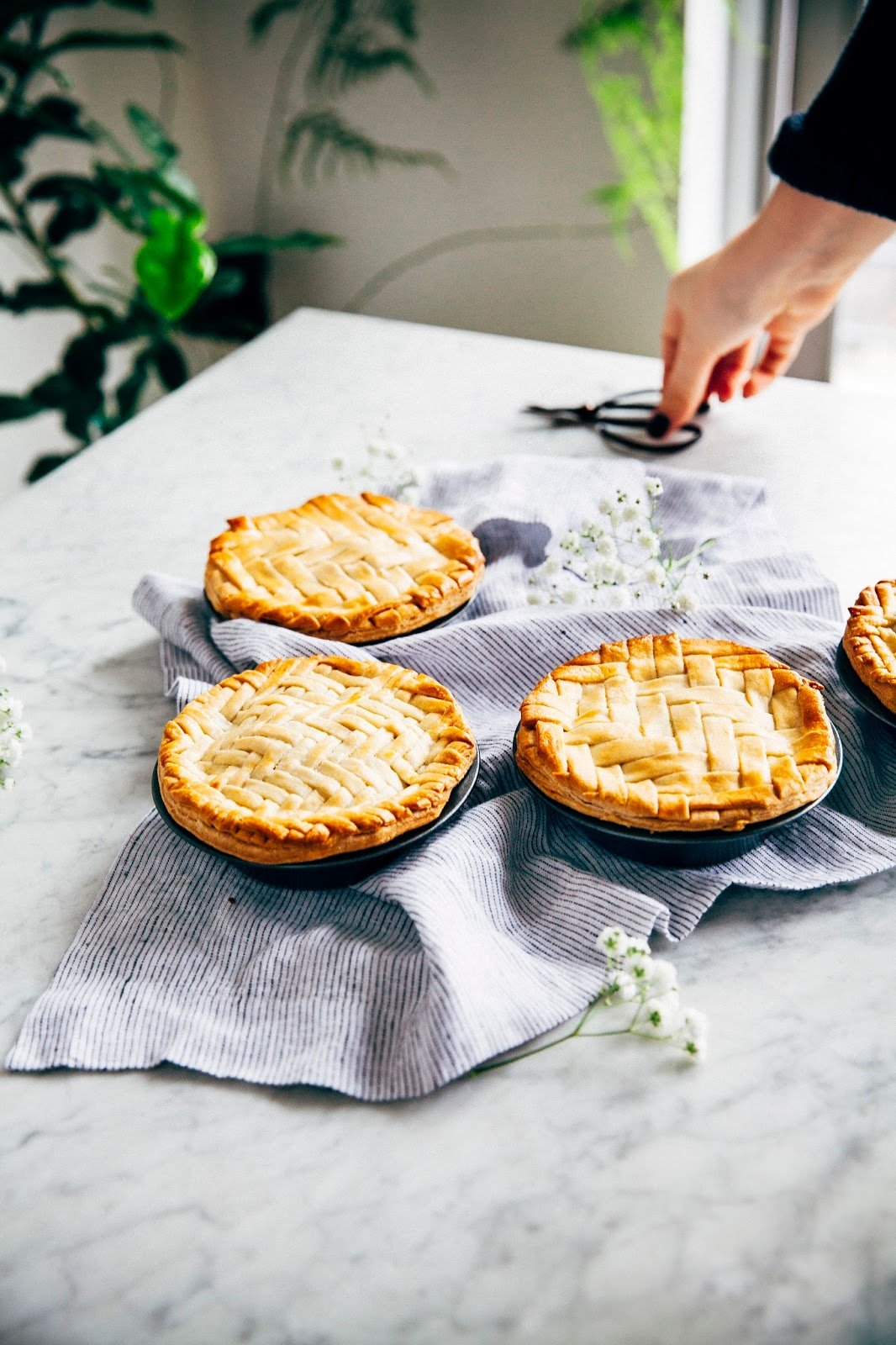 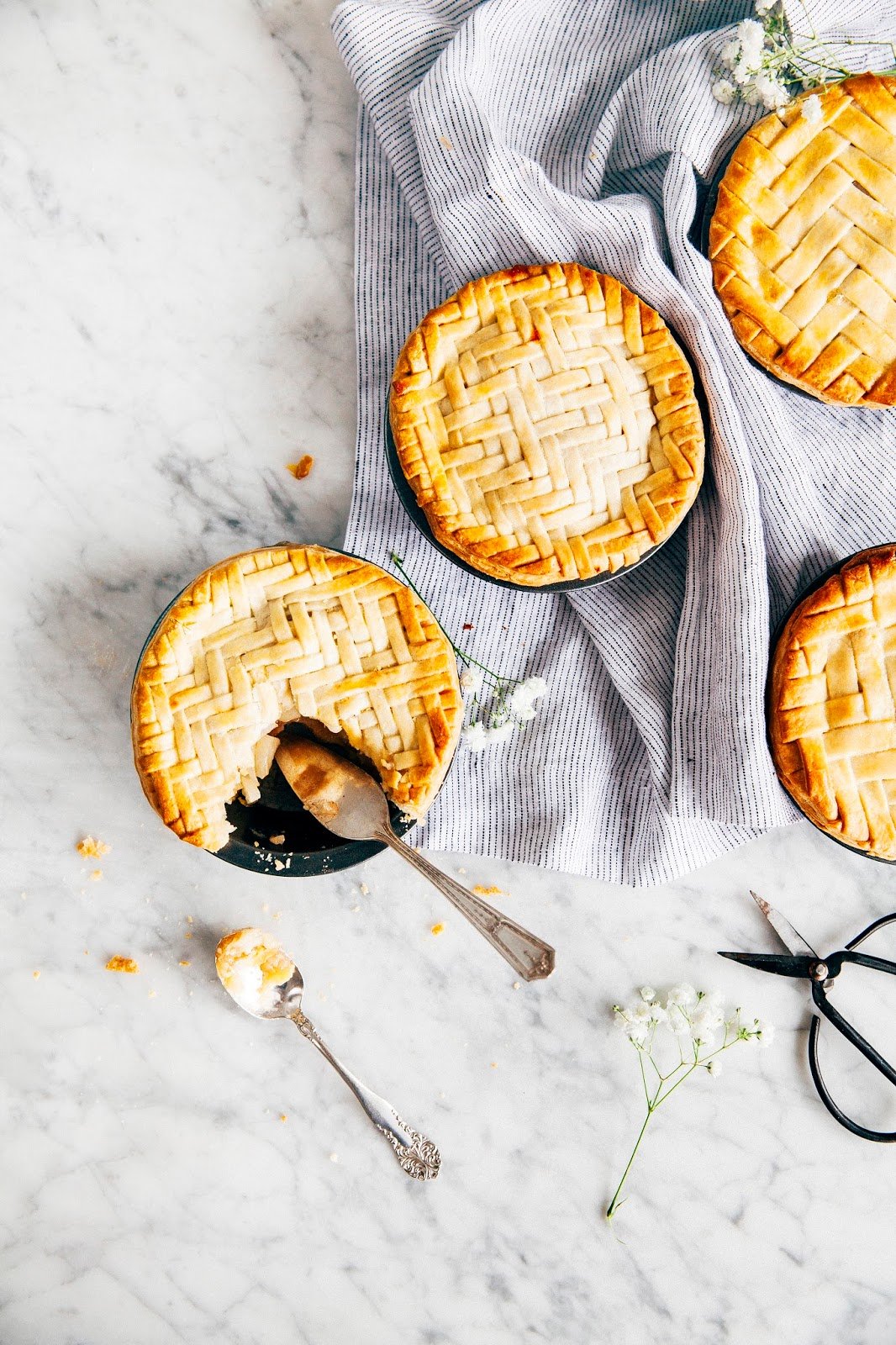 But there’s often a fine line between artistic, romantic solitude and, well, plain old isolation. When I spend so much time in my head, it can start to feel like I’m just there alone by myself, doing the things that I do. But that’s not true. Behind every blog is a living, breathing, and very real person with whom I share an entire universe with. We’re driven by the same passion and interests, and are overwhelmed and struggling with the same challenges. It’s amazingly wonderful how therapeutic it can be to actually get together and share our craft, trade tips and techniques, and collaborate in real life. That day, I went home from Erin’s place and felt like some of the world had been lifted from my shoulders.

The pie dough is made from the now ubiquitous Four & Twenty Blackbirds all-butter pie crust. We made up the recipe for the filling on the spot, and followed the crazy talented Stella Parks’ herringbone pie crust tutorial word for word. You can check it out (complete with a video!) on Serious Eats. You can also see more of these pies and hear Erin’s side of the story on her pretty blog, Cloudy Kitchen. Enjoy! 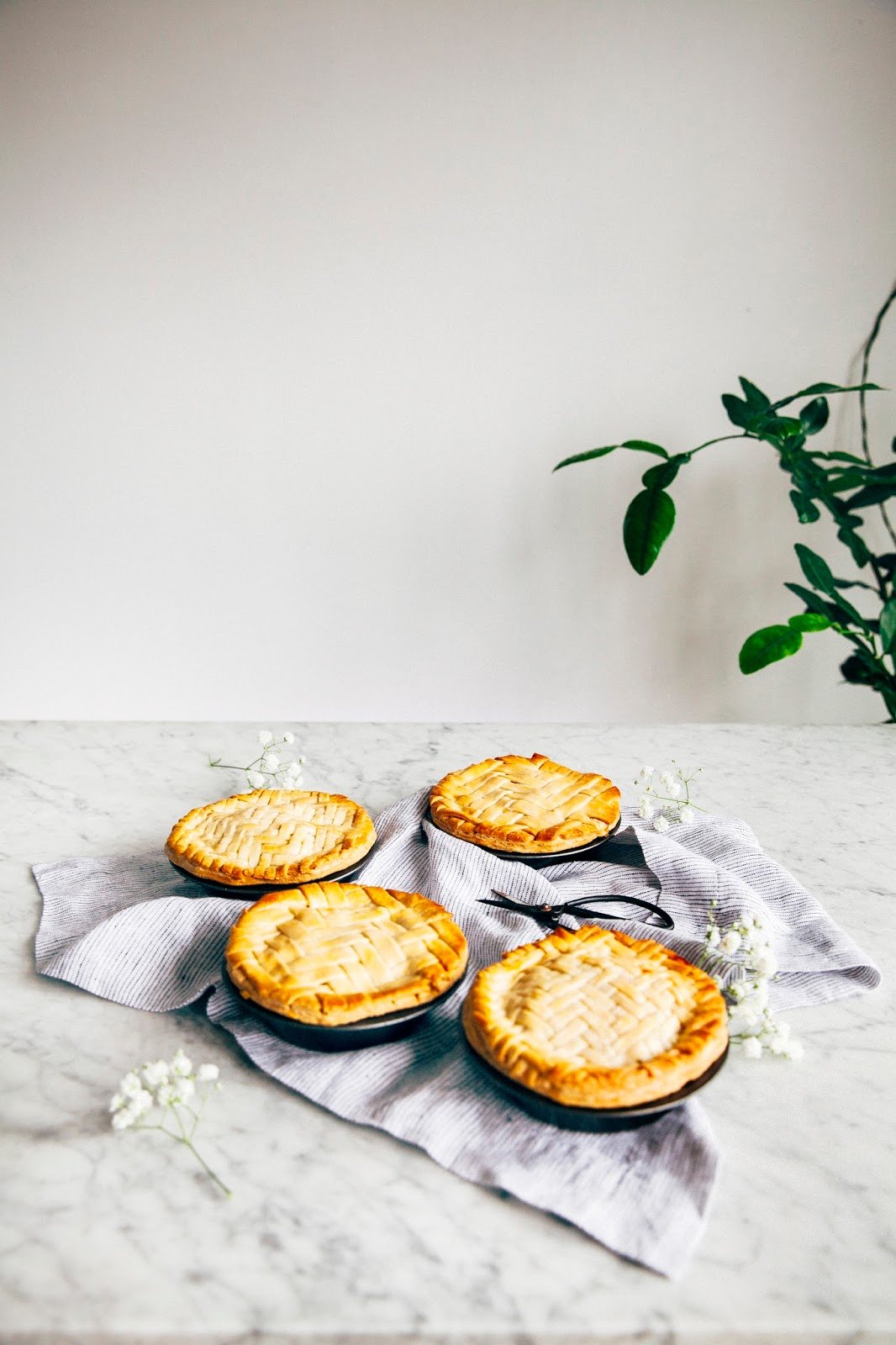 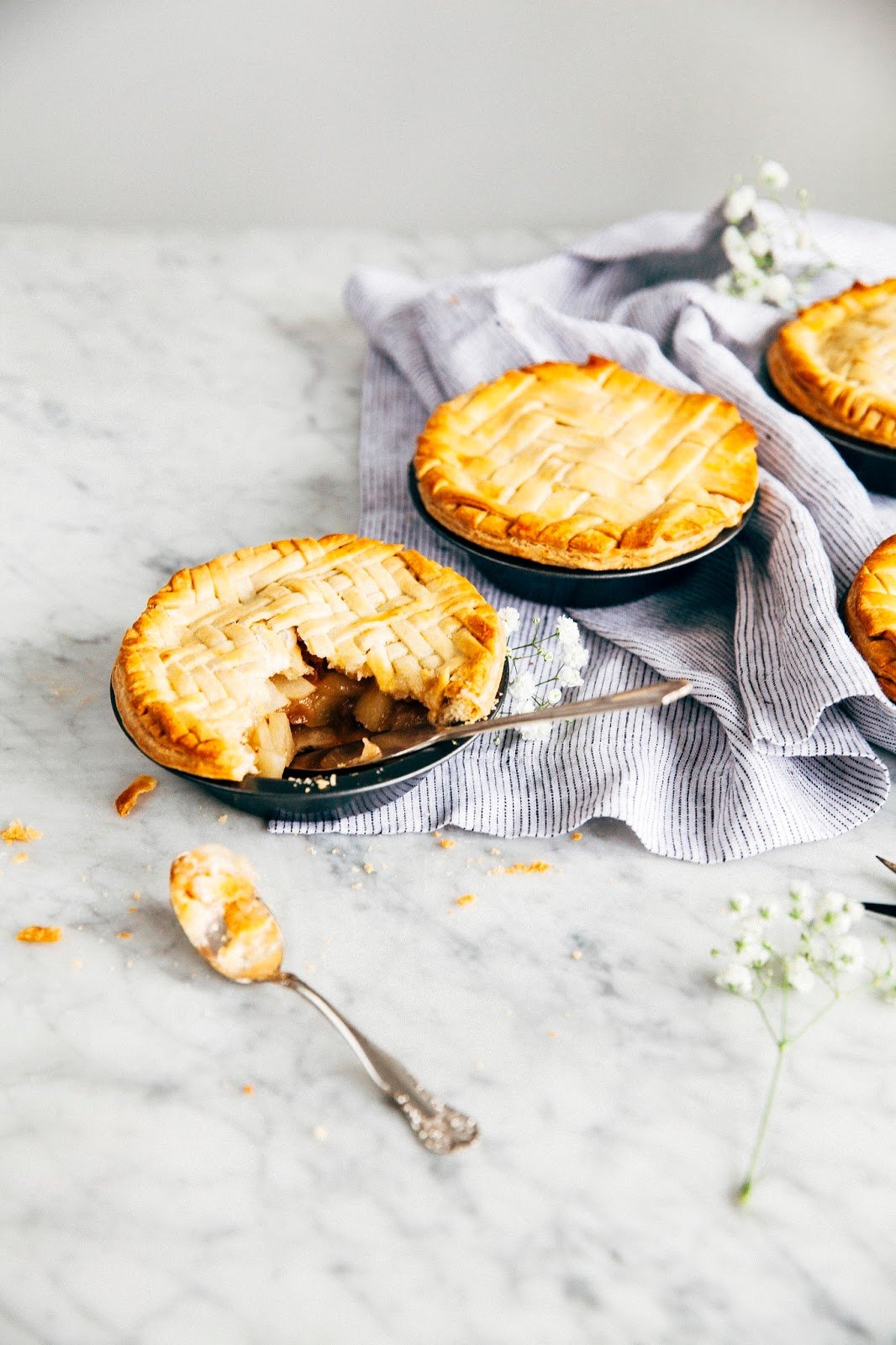 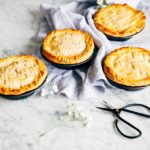 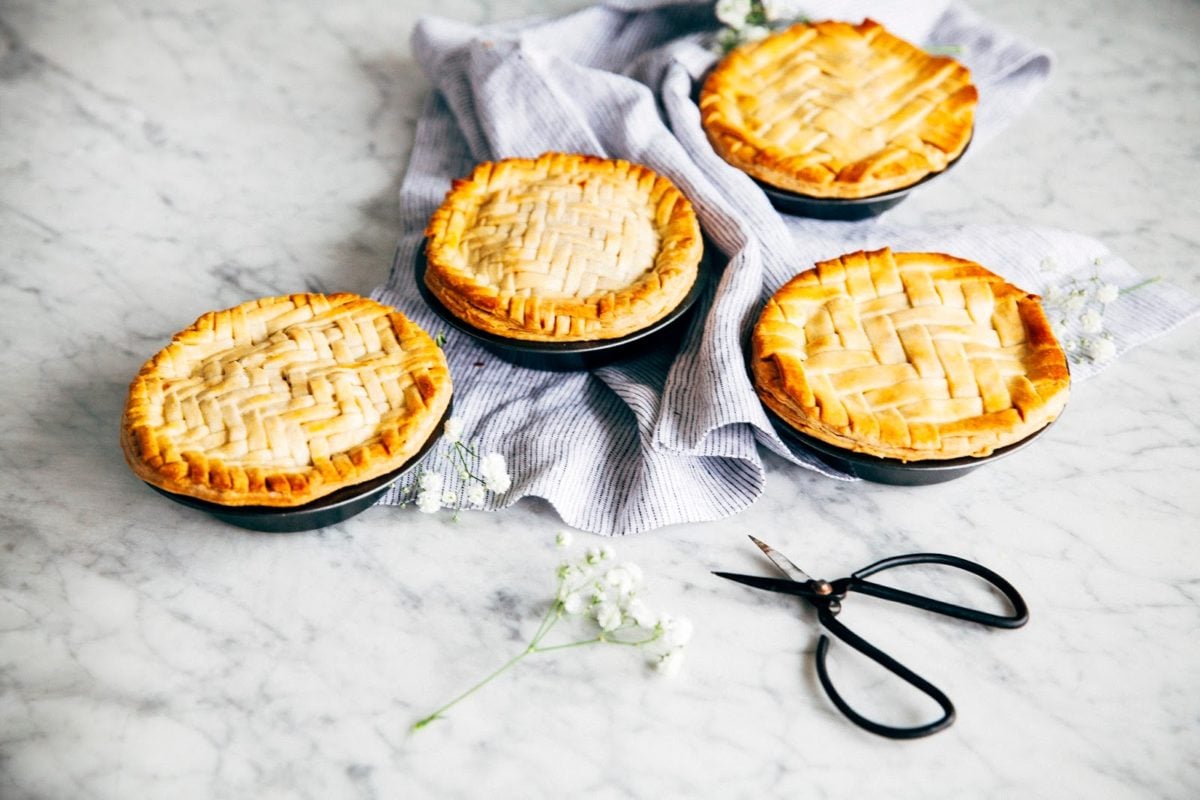