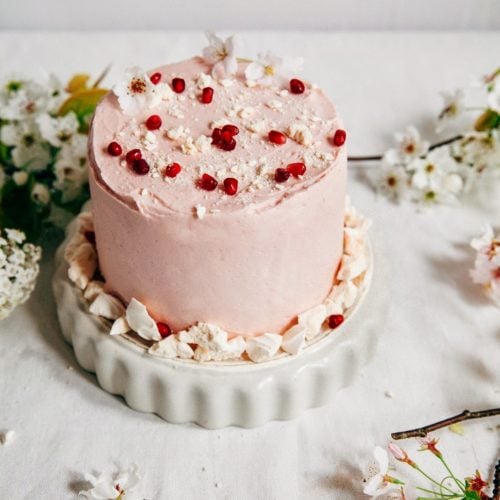 In the last few weeks, I saw several incidents and articles that led me to think about why I blog. First there was the whole Food52 Piglet controversy between two popular bloggers, Mimi Thorrison and Adam Roberts. From that hot mess came several wonderful nuanced and articulate articles from Eater, Lottie + Doof, and Design Sponge […] 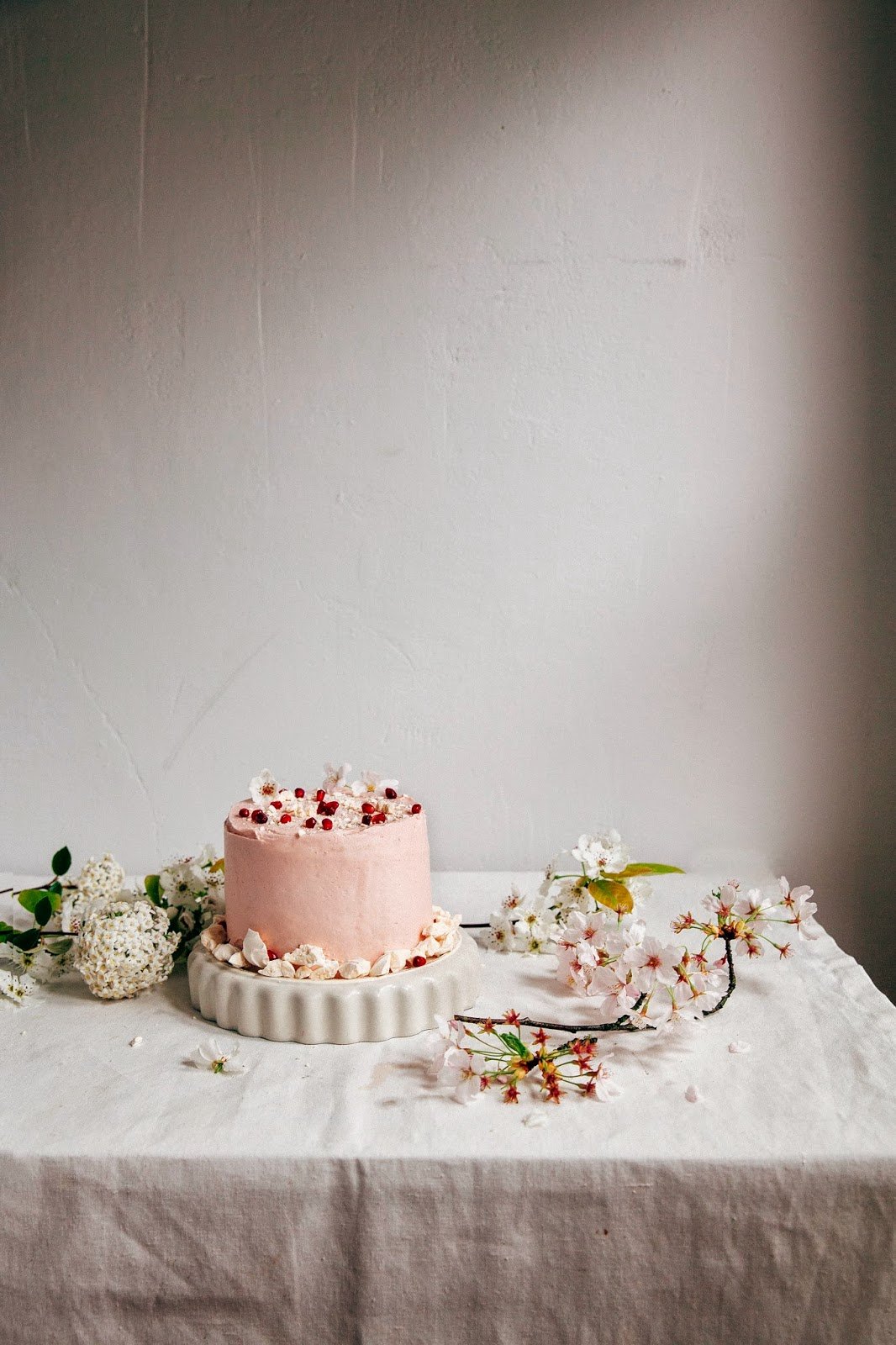 In the last few weeks, I saw several incidents and articles that led me to think about why I blog. First there was the whole Food52 Piglet controversy between two popular bloggers, Mimi Thorrison and Adam Roberts. From that hot mess came several wonderful nuanced and articulate articles from Eater, Lottie + Doof, and Design Sponge that offered differing perspectives on the incident, and each said a lot about the world of blogging and food media.

This post kind of came from me thinking about and digesting all of that. And let me be up front: It’s long and a tad controversial. For a while, I even struggled whether to publish it in the first place. But below are some thoughts about my blog, blogging in general, and the direction I worry it’s headed in the long run (and if you want to skip my rambling and head straight to the recipe, I promise I won’t be offended at all!): 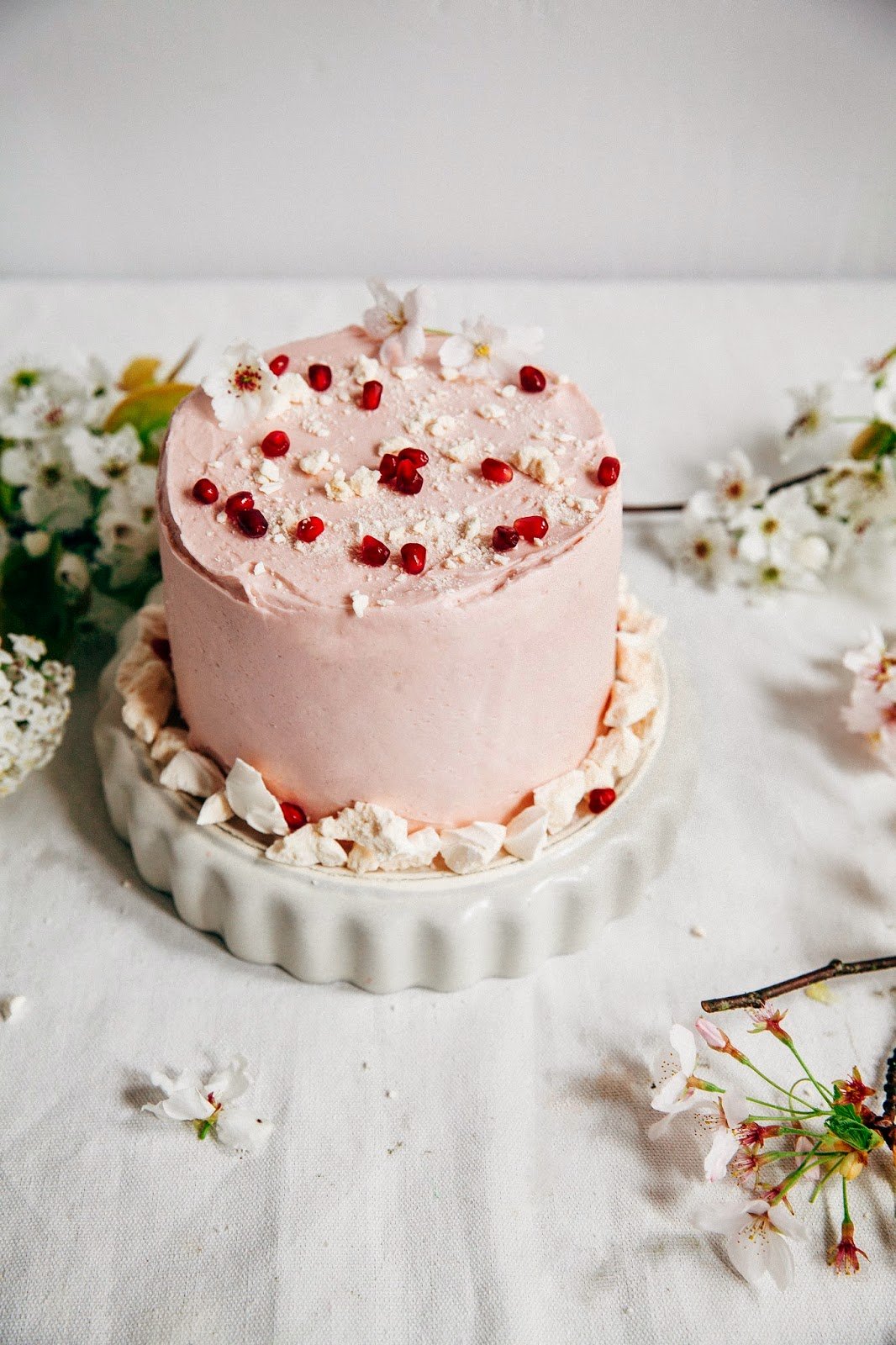 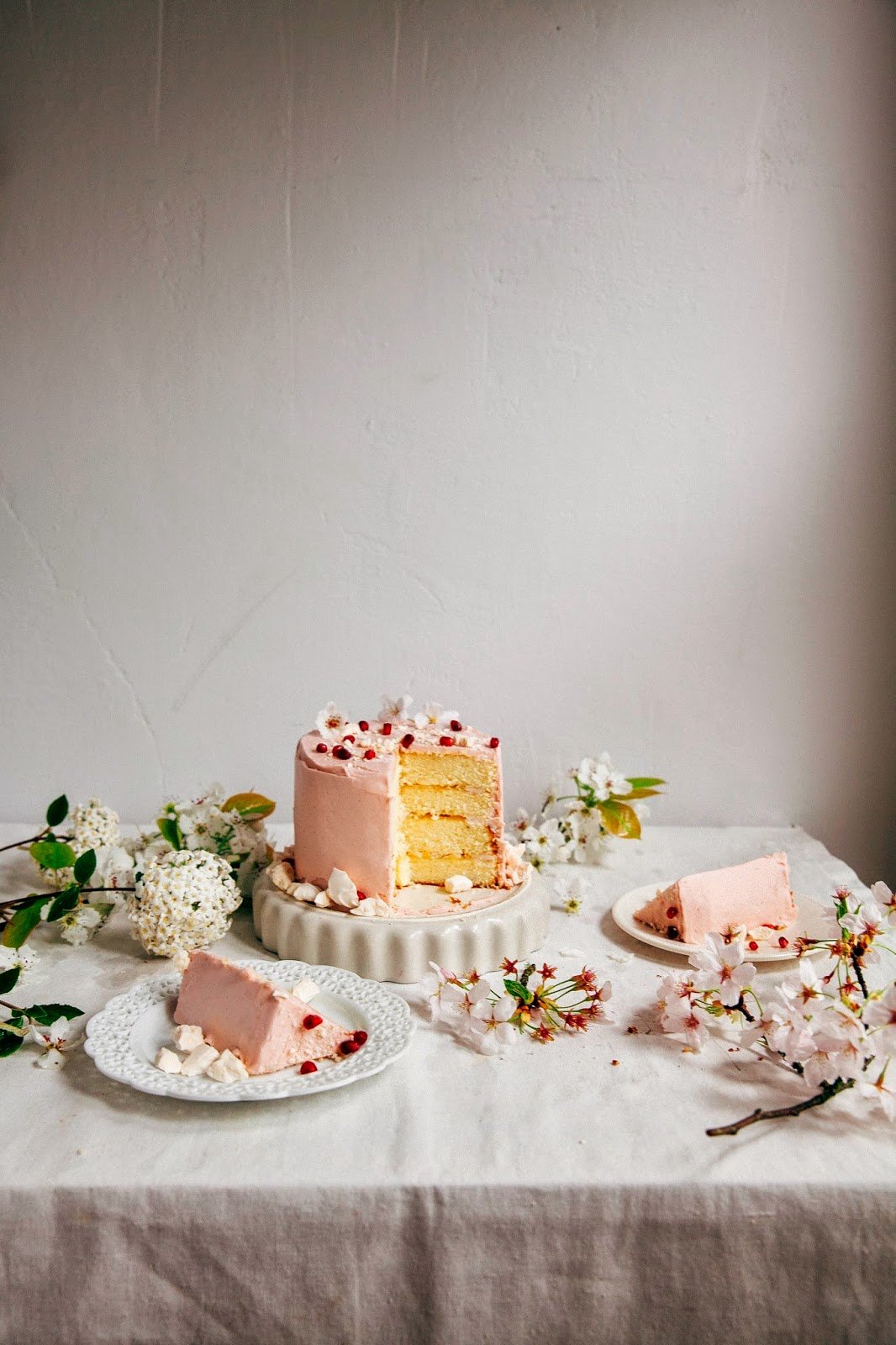 So, first some background: I started this blog back in 2011 as a way to keep up with friends and family, as well as distract myself from a job I hated. Back in 2011, even though it wasn’t all that long ago, Blog Land was an entirely different landscape. Pinterest was just getting started and only accepting new users via email. People still used Instagram in the way they use their personal Facebook profiles today; that is, folks only followed people they knew in real life as Instagram’s content was primarily blurry photos with overwrought filters.

Back in the day, the only way to get your food blog noticed immediately was submitting to content aggregation sites like Foodgawker and Tastespotting. Unlike Pinterest and Instagram, there was actually some sort of quality control — you submitted your picture, and you waited with baited breath to see if your recipe would be published on the site. In the beginning, especially when I was just starting to figure out my DSLR camera, I got a lot of rejections. Rejections often came back with blunt feedback: bad composition, harsh lighting, white balance issues, etc. That feedback, while harsh, was really helpful in helping me figure out how to take good photos! I still remember the butterflies in my stomach when Foodgawker finally accepted and published one of my pictures, a not-that-great, slightly overexposed and underfocused picture of this hazelnut crepe cake (whose pictures are… well…eek!). But still. If I had to point to one thing that put my blog on the map and bring in, you know, readers who weren’t my immediate friends and family, I’d probably have to credit Foodgawker and that picture, which eventually got republished by The Huffington Post.

And this is where my memory starts to get hazy. Because it was around here, sometime between my multiple, frustrated attempts to get published on these sites, that I got bit by The Bug. You know, the feeling of awe that people you don’t know are reading your work and interested in what you are saying; the feeling that your blog could be something MORE… a fully fledged cookbook, a full time job with a steady paycheck, and a stream of sponsorship opportunities with cool companies. You name it, the sky was the limit. Blogging was a new, uncharted world full of financial opportunity and internet fame that I — or anyone, really — could easily tap into. That was The Bug.

I’m not going to lie. I definitely got suckered into all that, especially after Saveur Magazine shortlisted me as one of the Best Baking & Desserts Blogs and the press mentions, sponsorships, and free SWAG came rolling in. I did sponsored posts for the money and wrote nice things about products I was just “meh” on but felt guilty because I’d gotten it for free. These days, I’m extremely picky about the people, companies, and products that I work with. Because after a while of saying “yes” to everything, I started to realize that it just wasn’t my jam. The extra money was nice, sure, but every sponsored post took me further away from why I was blogging in the first place: learning how to cook new baked goods and play with different ingredients. And of course, there was less talking about my life and the things I ate with friends who were far away — instead, I was talking about products and events I attended in a weird overly-smiley, way-too-shilly way. It wasn’t sincere or authentic.

And then there was a whole other gross thing I caught myself doing: pandering. What does that mean, exactly? One of my blogger friends, Kathryn, wrote a thoughtful, articulate post about baking for the sake of blogging that’s worth checking out. As for myself, as recently as a few weeks ago, I noticed that my Instagram follower count would decline as I posted lots of photos of my trip to Singapore and the Philippines. I realized that the majority of my followers only followed me for my dessert pics, and my dessert pics alone. Why else would a picture of a pie recipe of mine have twice as many likes as a picture of some cool architecture in Singapore or dropdead gorgeous ocean views in the Philippines? My initial reaction to the fluctuation was, Oh, shoot! Gotta keep my Instagram followers high; I’ll scale back on my trip pictures and just keep posting pictures of sweets. And I actually freaking restrained myself, holding back photos of mountains and oceans in order not to annoy anybody!

But later, as I was standing watching my old boss dance around in the best Darth Vader costume I have ever seen (complete with a glowing light saber), I realized that there was no way I could NOT take a photo of this for my Instagram feed. There were a handful of old friends and coworkers who I know would just DIE with laughter seeing the photo. It seemed ridiculous to text them all individually, especially since they all followed me on Instagram. Why was I censoring myself, restraining myself from posting and sharing pictures of experiences that I was enjoying? Because a bunch of anonymous followers who I didn’t know personally were unfollowing me?!! Like… really???

I guess what I’m trying to say is, that in the last three and a half years of blogging, I’ve found myself too easily caught up in the “fame and fortune” side of things. And whenever I am in that funk, I always get really depressed and down on my blog — beating myself up for not making more money, not having as many followers, not being re-nominated for that award, etc. And I hate that. Because it’s not why I started blogging in the first place, and perhaps more importantly, it’s not why I continue to blog, and certainly not what I love about it at ALL. But it’s incredibly easy to forget, and I have to take a step back and remind myself of that every so often.

My big concern, however, is that blogging appears to be moving in the opposite direction, especially with the turn of Instagram and Pinterest as legitimate growth tools. It’s a lot easier to share the pretty pictures of your recipes on either medium, and watch the likes, hearts, and ultimately, pageviews to your blog roll in as algorithms serve it to people around the world. It’s much easier to amass a big following fast, as long as you have a decent eye for what’s hot right now and use the right hashtags. The Bug is easier to catch more than ever, as folks become famous practically overnight with one Pin or regram.

Ultimately, there’s nothing wrong with blogging to become rich and famous, the chance to break into a new industry, whatever. Blogging deserves to be recognized as a perfectly legitimate career (we all certainly work hard enough on our blogs for that to continue being unrecognized), and it’s well on its way to becoming one. But I just hope that we also don’t lose sincere, authentic, and heartfelt content in the process. Because if everybody’s trying to get big all the time, everybody’s cooking and presenting recipes that they know are popular, taking and styling photos that are on-trend and everybody else will like… right? Which is… fine. But also, not really.

Because it’s like what Tim was saying in his post: we need less pandering, especially the kind that I’ve been guilty of in the past. That is, a little less blogging for the sake of blogging, press mentions, likes, hearts, and much less of that self-censorship that prevents us from posting the content that we actually want to. We need bloggers who are unafraid to bring new criticisms, ideas, and perspectives to the table. And certainly, we need more bloggers who are unafraid to lose followers while doing so.

So post that picture that has nothing to do with food, or publish that recipe that you know is a little bit off-the-rails.

I promise that I won’t unfollow you. 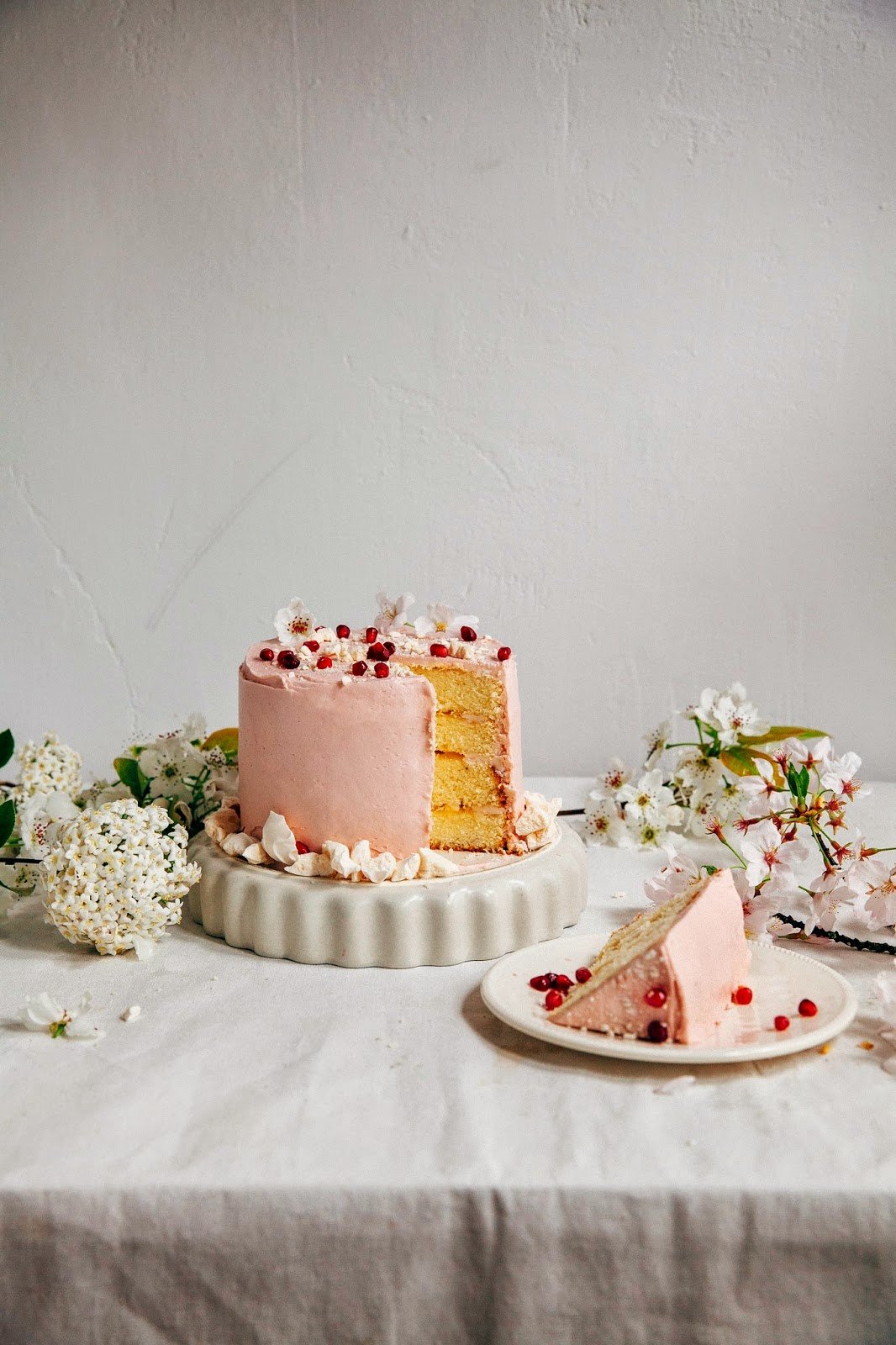 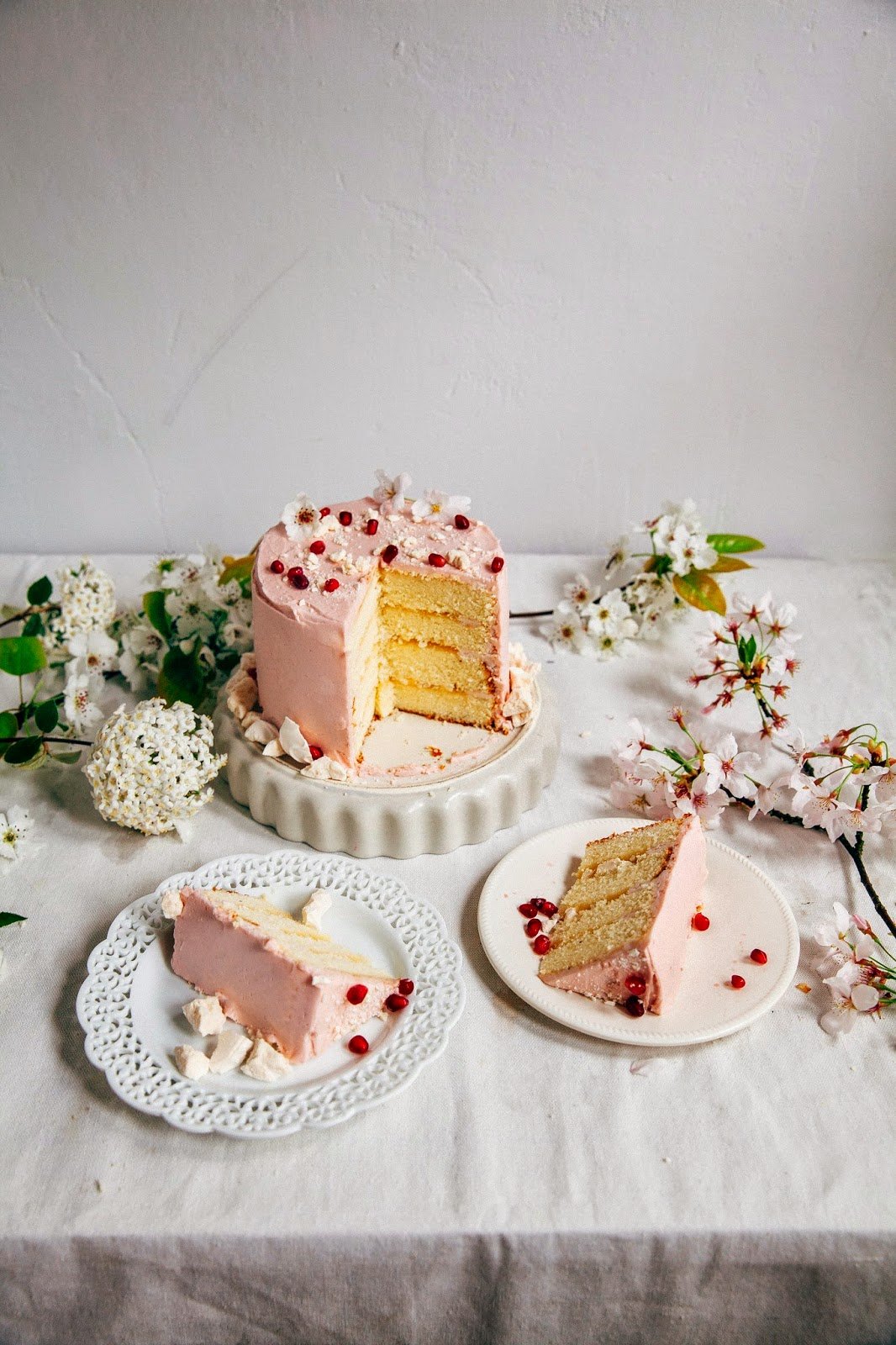 On that note, after emotionally sorting all my feels, I just wanted to bake something that was pretty, tasty, and time consuming enough to be therapeutic… like this pomegranate citrus meringue cake. Why pomegranate? I’ve been drooling over the pink buttercream cakes on Pinterest lately, but since I’m a hater of artificial food coloring, decided to try and find an ingredient that would provide natural color instead. Pomegranate won the fight (though beet, hibiscus, and red wine (!!!) came close), giving the buttercream a wonderful pale pink tint. From there, lemon curd and crunchy meringue crumbles seemed to pair naturally with the subtle fruit flavor. Enjoy! 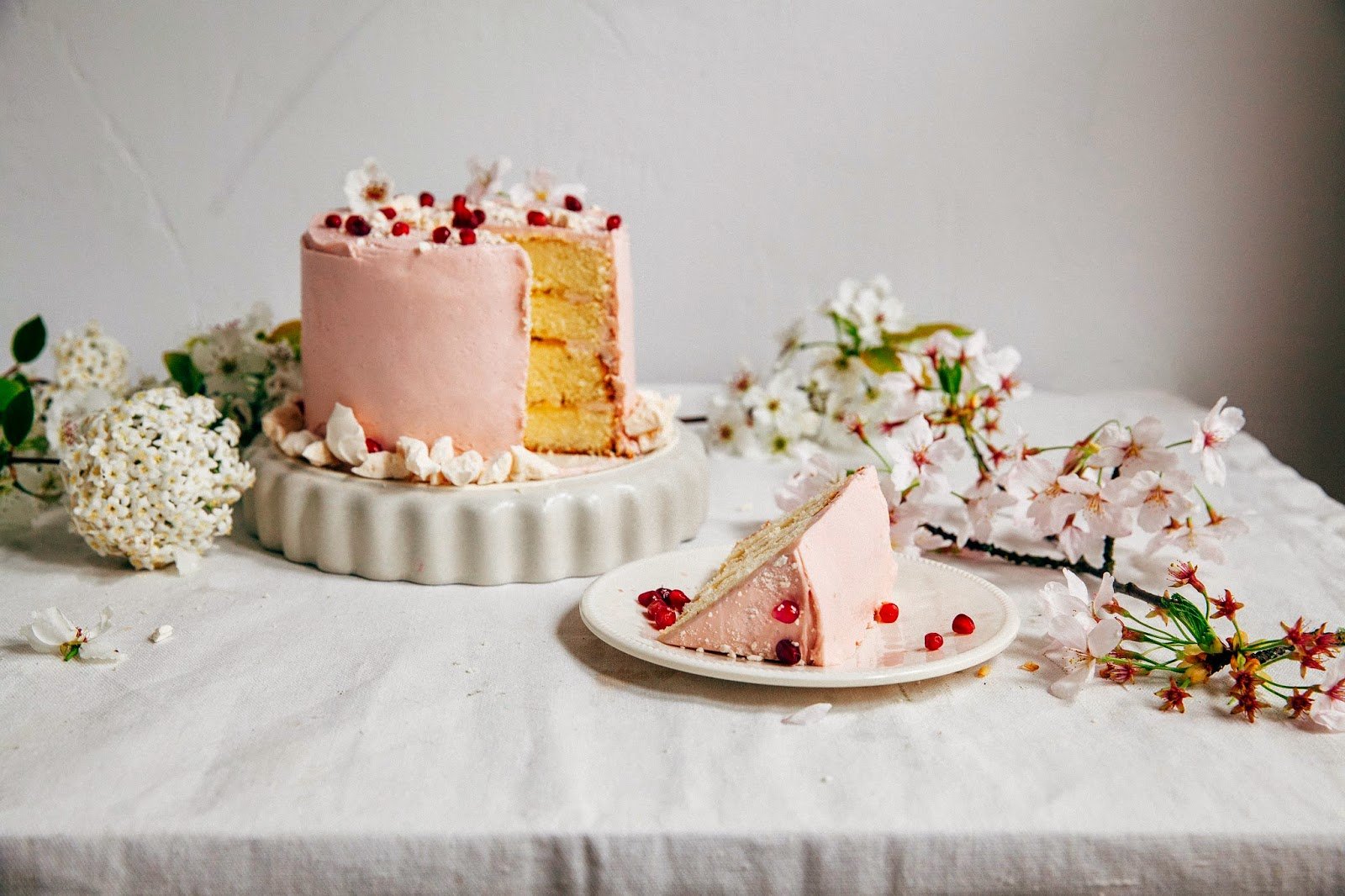 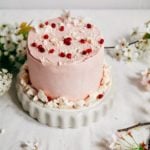 (makes around 1 cup, enough for one cake)

(makes enough to frost one cake)

For the Pomegranate Buttercream Frosting

Inspired by Decorated and Call Me Cupcake 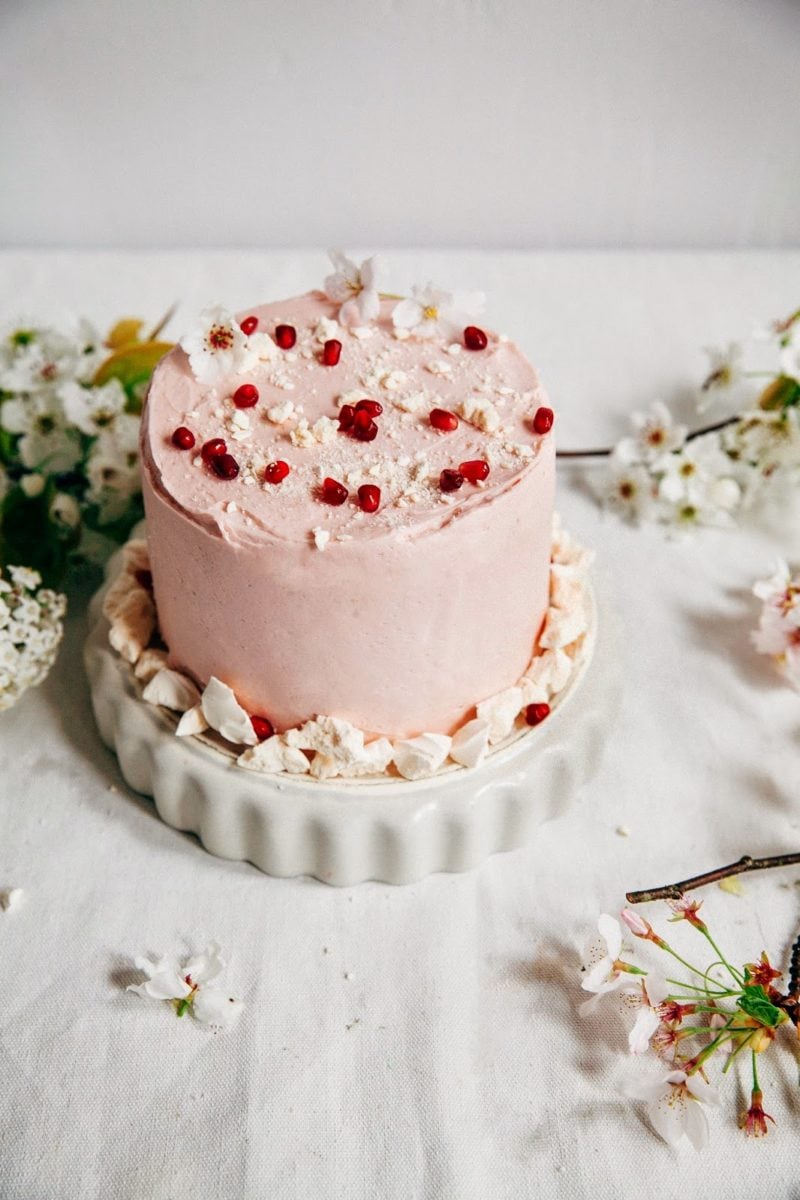