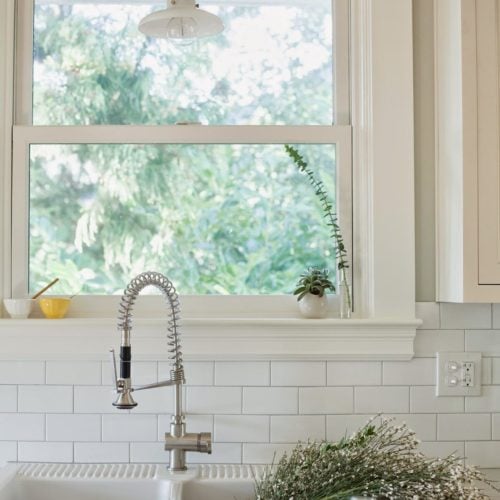 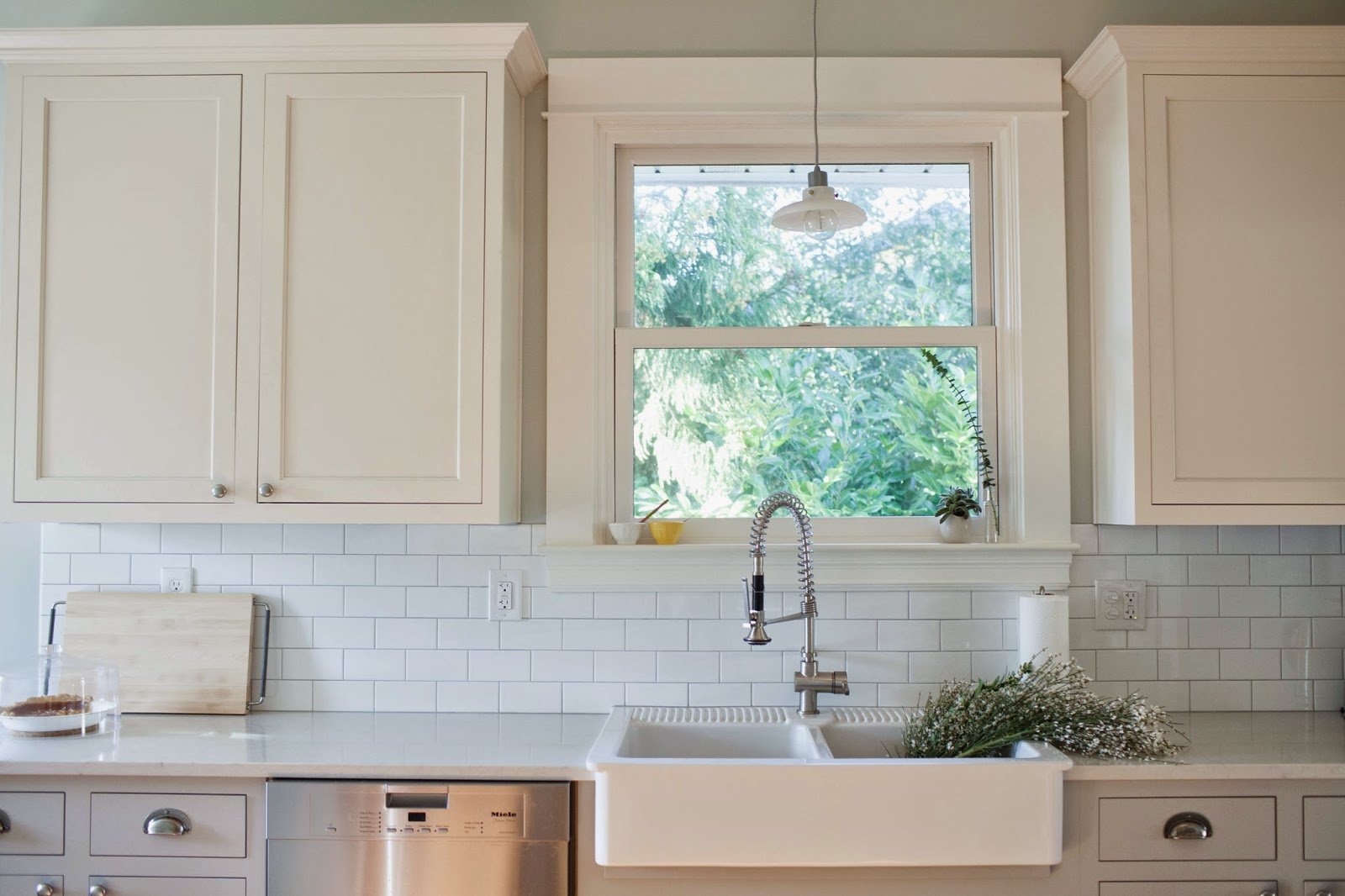 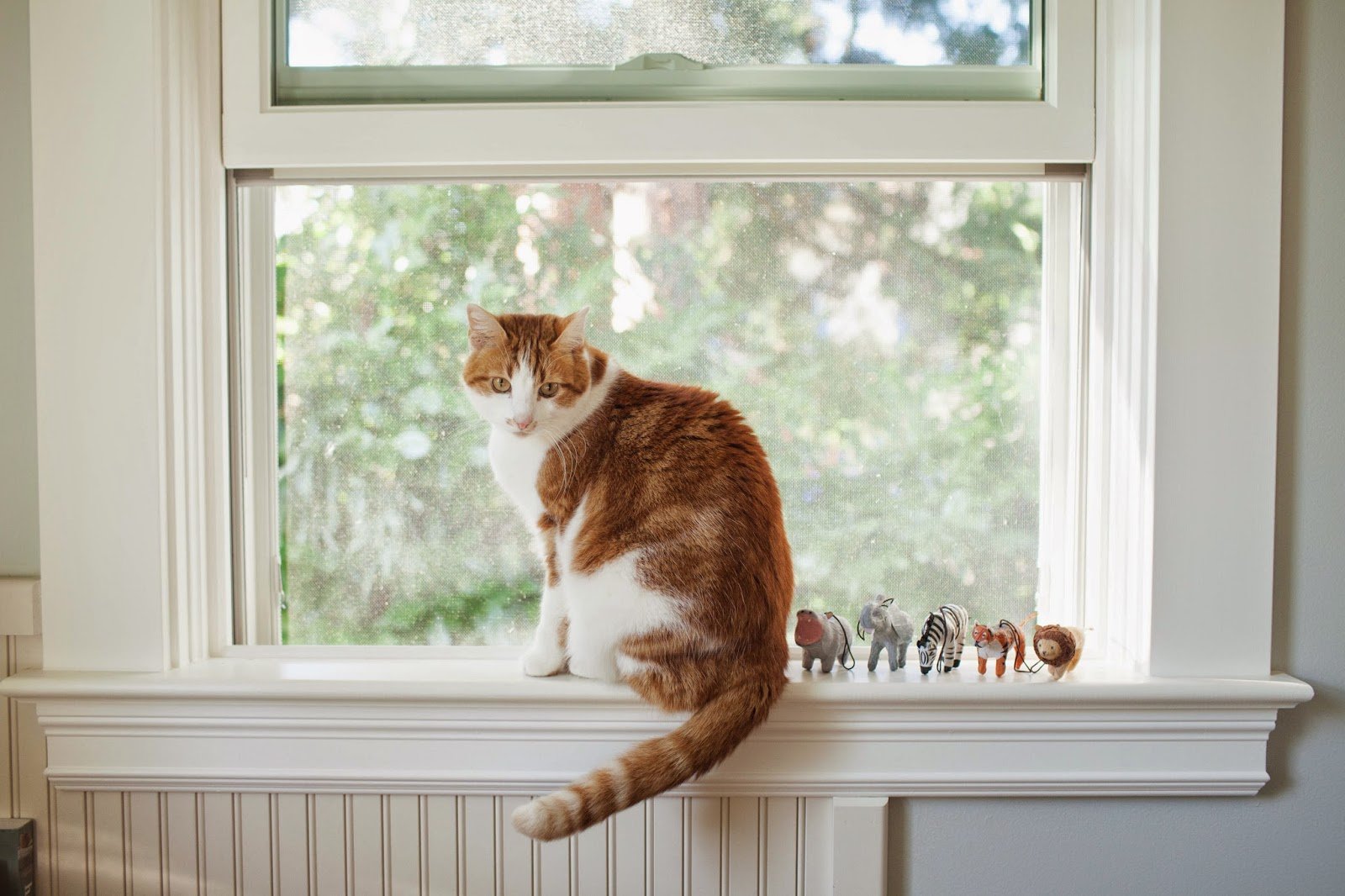 After half a year, I’m finally revealing my kitchen! A big thanks to my incredibly talented photographer friend Celeste for taking these beautiful photos of my kitchen. For the last few months, I’ve been sharing bits and pieces on Instagram. But now it’s finally time for the official tour! Here we gooooo:

BEFORE/AFTER: THE SINK AREA
So remember this hot mess? Complete with a sink leaking into the wall of the house, 18-inch depth countertops, a window that I couldn’t open since it was painted shut and no dishwasher resulting in a setup of two space-consuming dish racks perpetually full of drying pots and pans? 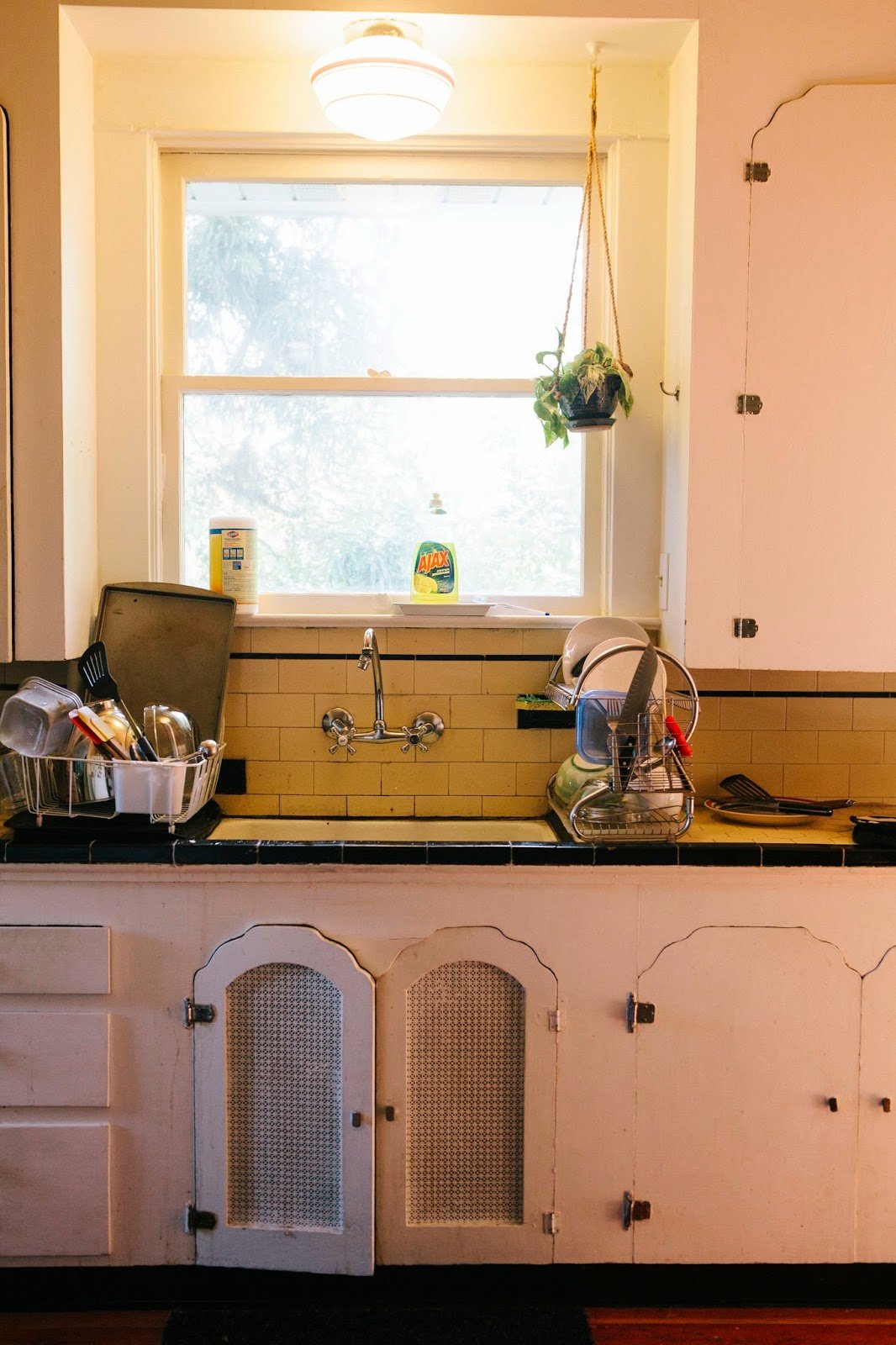 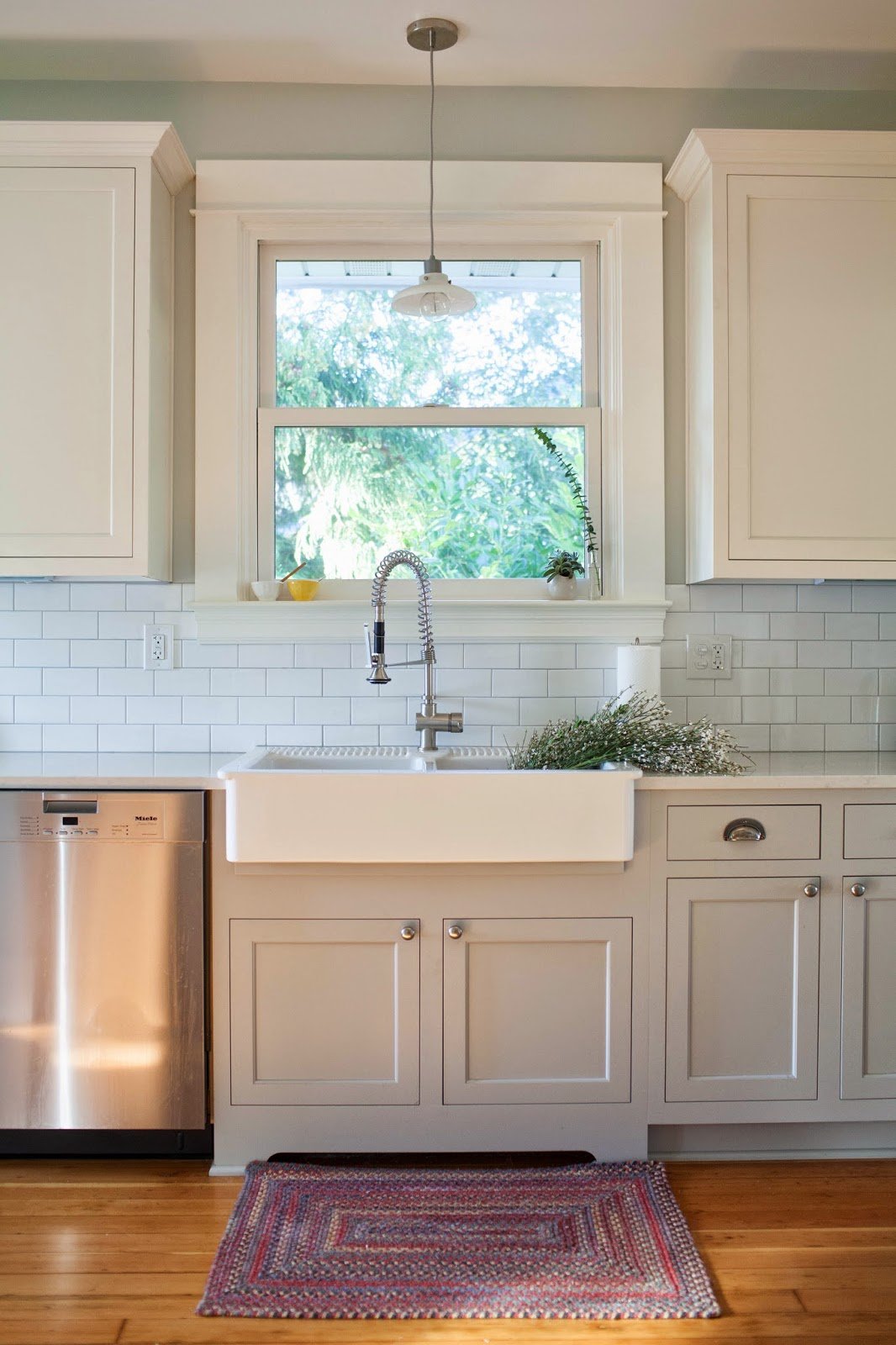 Although I did lose some of the old house charm (in particular, I’m sorry to see the black tile border and the ventilated cabinets under the sink go), the sink area is much more timeless and functional with the white subway tile and neutral rectangular cabinetry.

Can we just take a second to acknowledge the dishwasher next to the sink? Prior to the remodel, I hadn’t had a dishwasher in years. And let me tell you something, guys — Erlend and I get in to so many less fights now that we have a dishwasher. It’s crazy how many of our fights were related to washing and leaving dirty dishes in the sink.

In the end, despite some initial reservations, I went with the double bowl farmer’s sink from Ikea that some of my blogger friends had warned against. It was just too cheap, huge and pretty not to buy. Although I sometimes panic when I wash off things with particularly colorful ingredients like turmeric or beets, staining hasn’t been a problem yet — everything can be cleaned off with citrusy soap, salt and elbow grease. Also that faucet deserves some praise: it reaches all corners of the huge sink, and its spraying capacity is out of this world. Washing sheet pans and giant woks has never been easier. 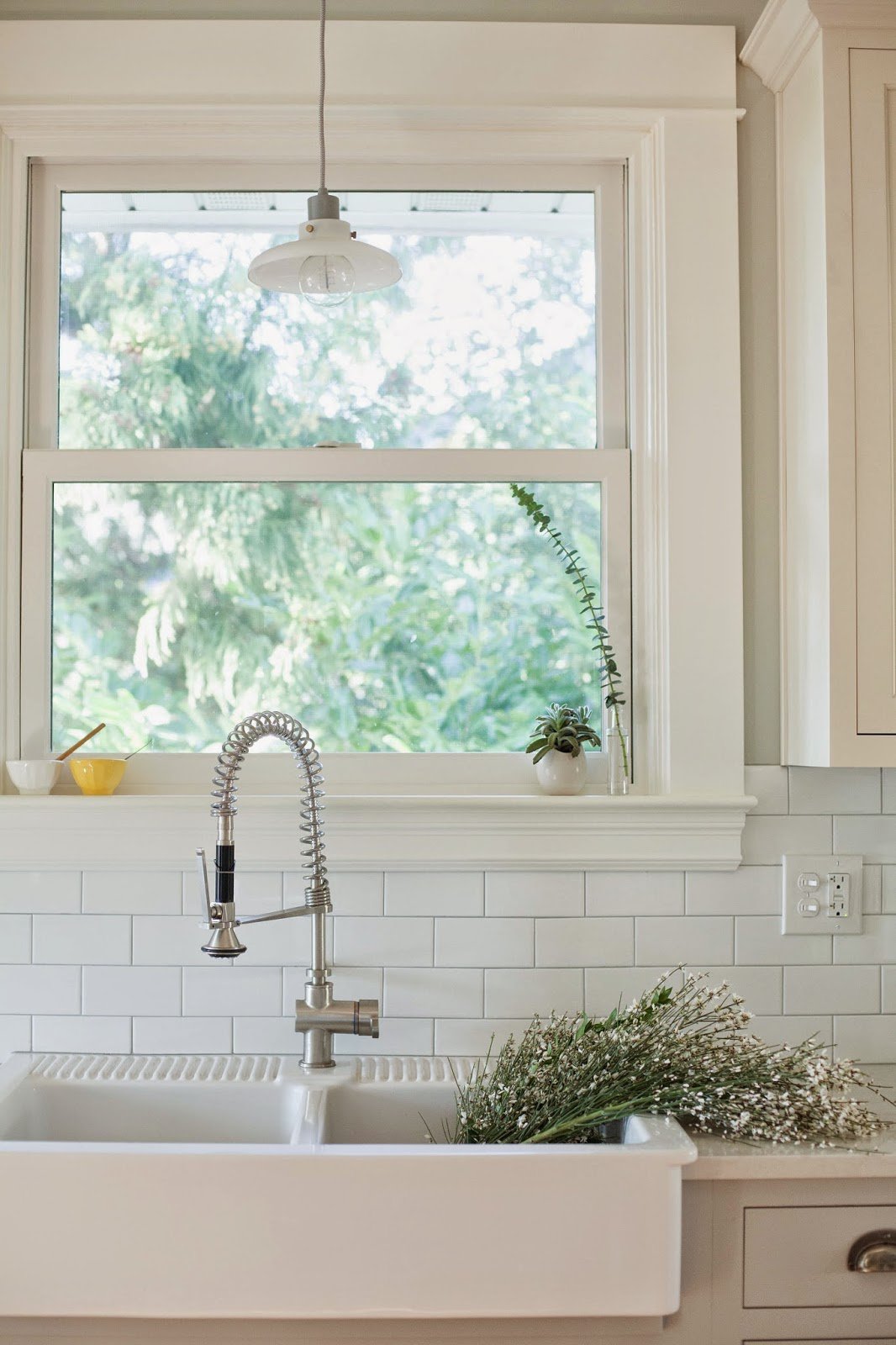 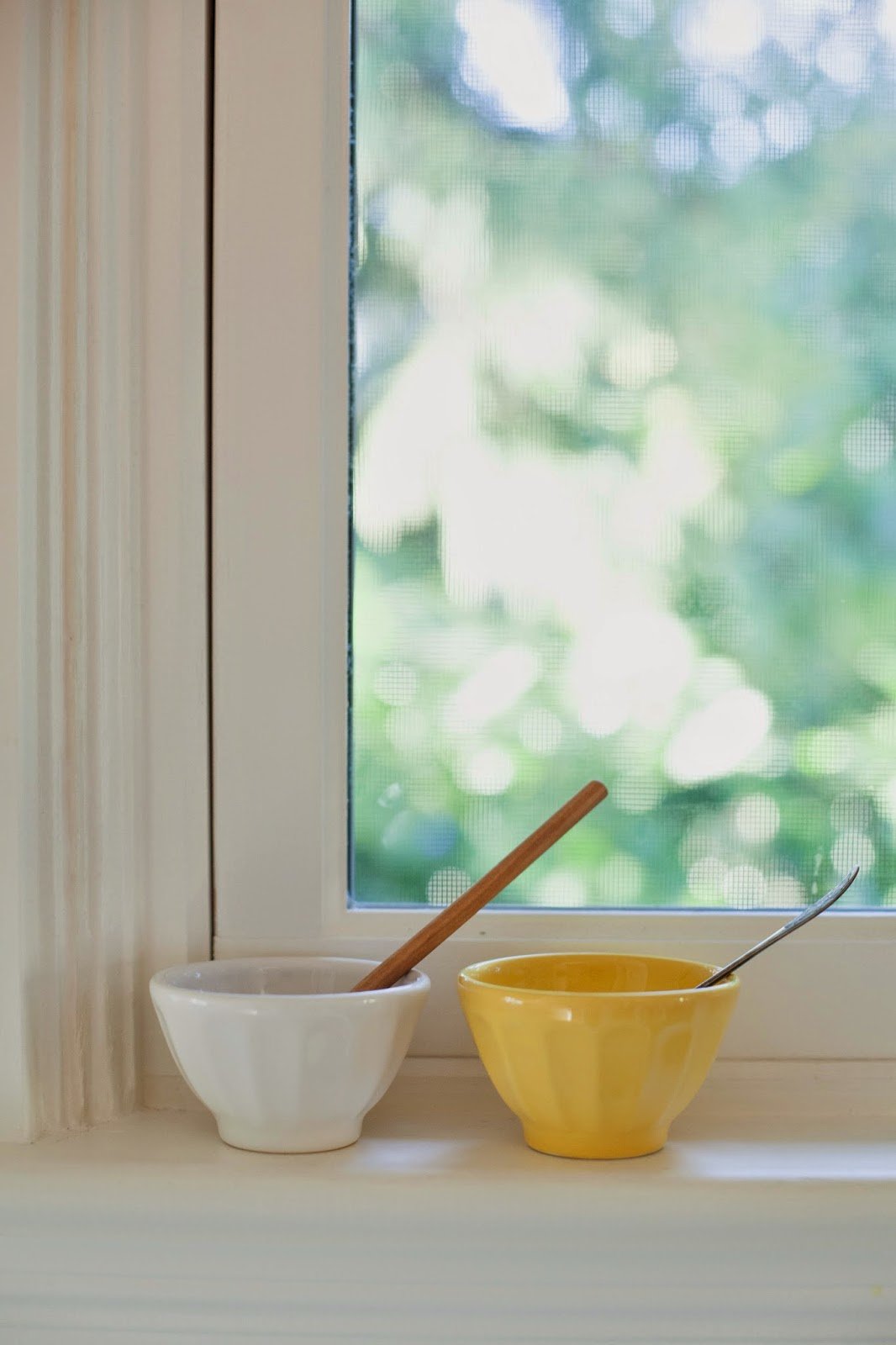 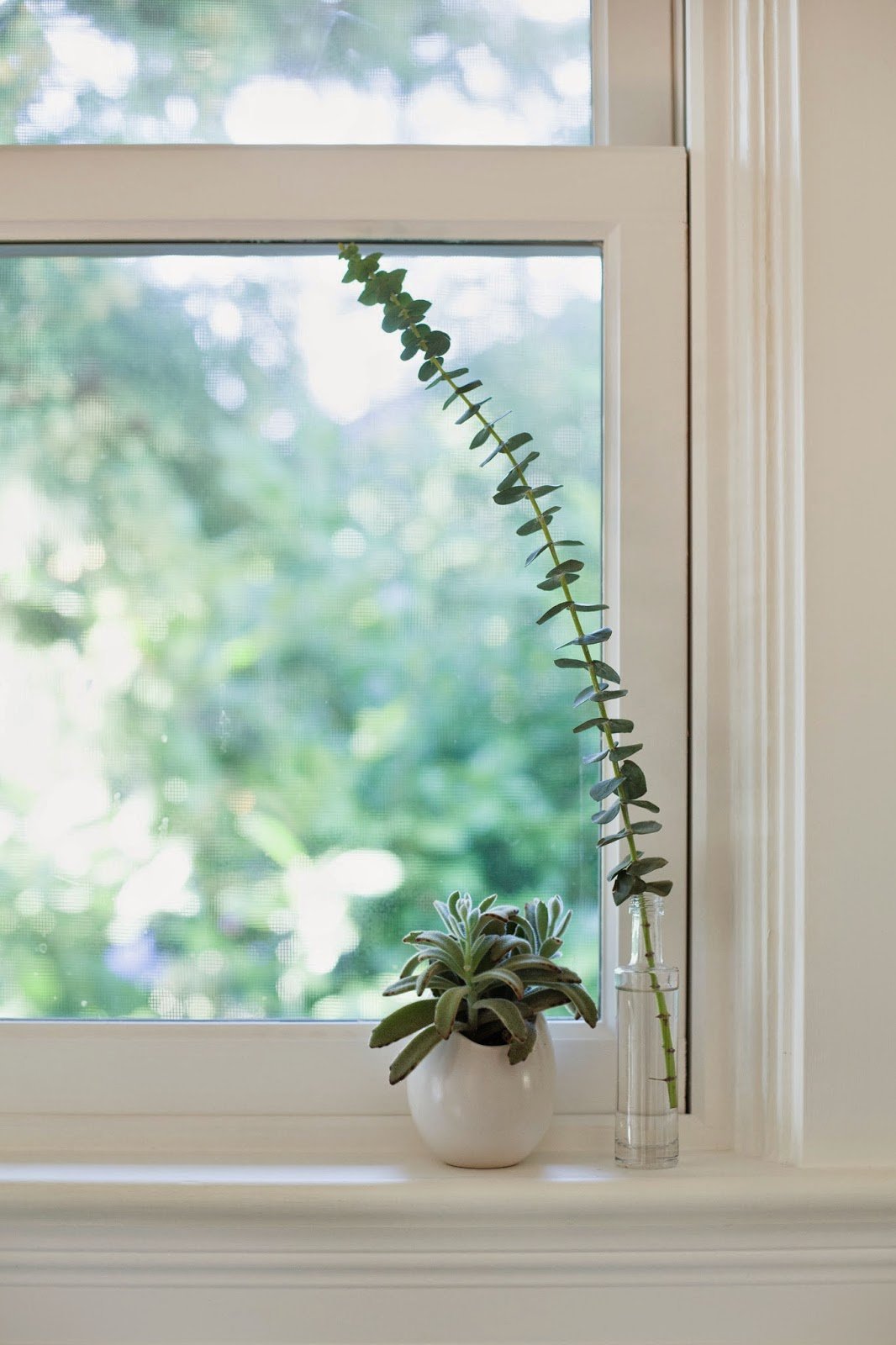 My neighbors used to grow bamboo in their garden, turning their house into some sort of mini bamboo farm in the 70s and 80s. My own house benefits from this funky bit of Southeast Portland history — even though a new set of owners lives there now, they left a lot of the old bamboo farm’s greenery and a huge, verdant, blooming wall made of bamboo and other trees divides my house from my neighbor’s house. This is what the window looks out onto; the view is nothing but green, green and more green. Also since the window faces west, it lets in a lot of great light in the late afternoon. Considering I live in the heart of the city, this is really the best view I could ask for. 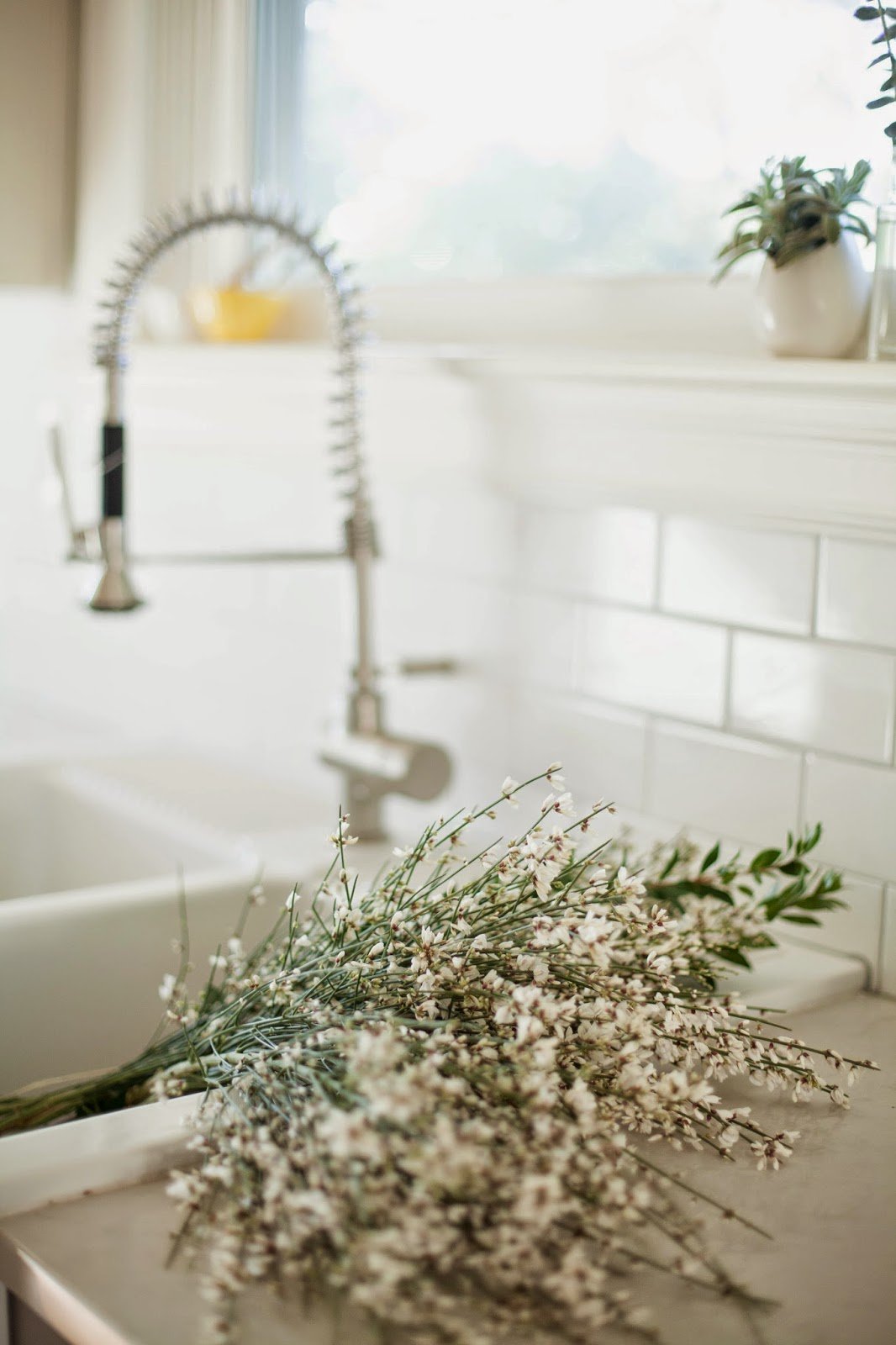 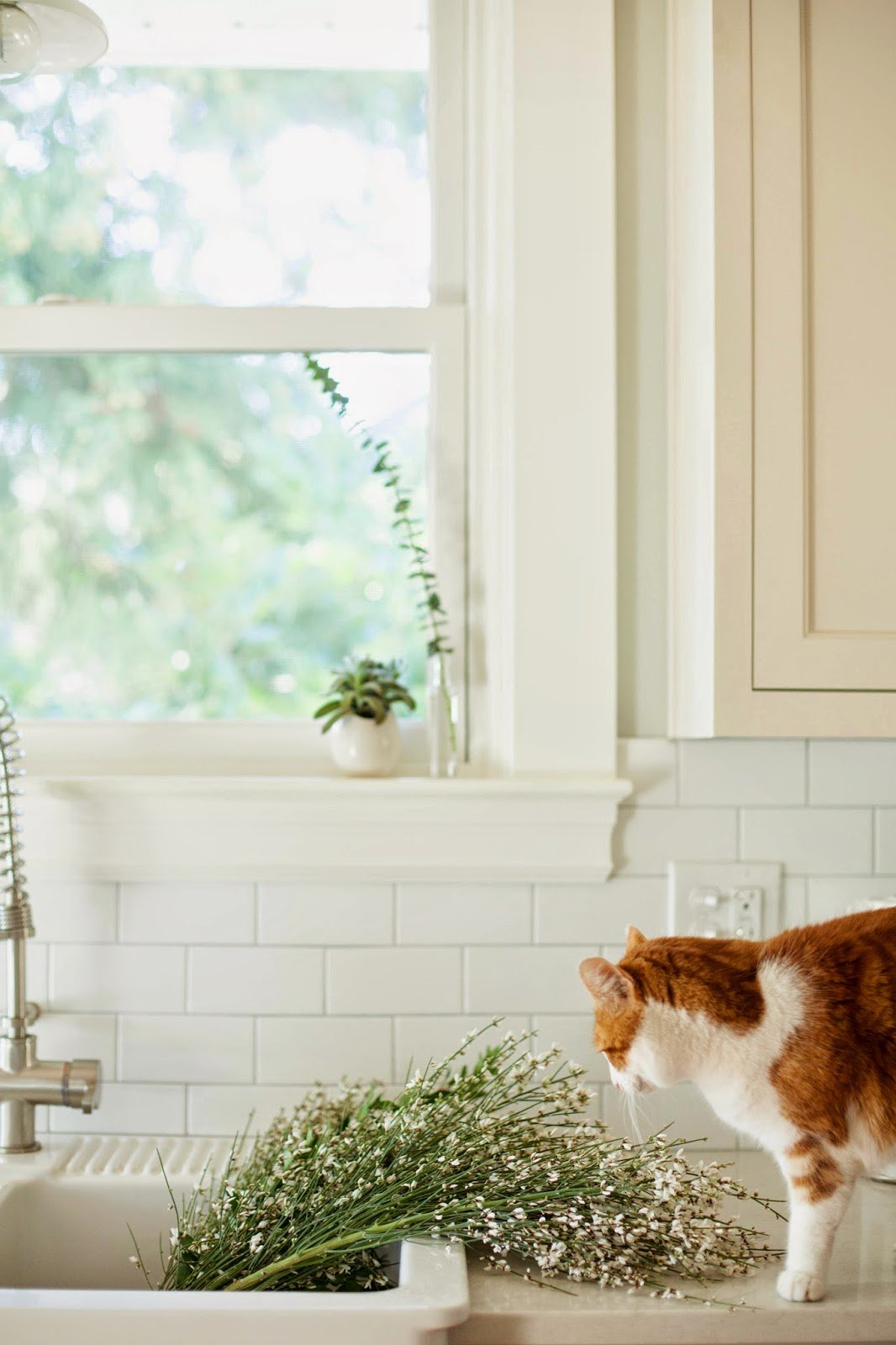 BEFORE/AFTER: THE RANGE AREA
This is where I used to cook. A dimly lit side of the kitchen with no hood, excessive and oddly sized storage that wasn’t actually all that useful leading to tons of clutter: 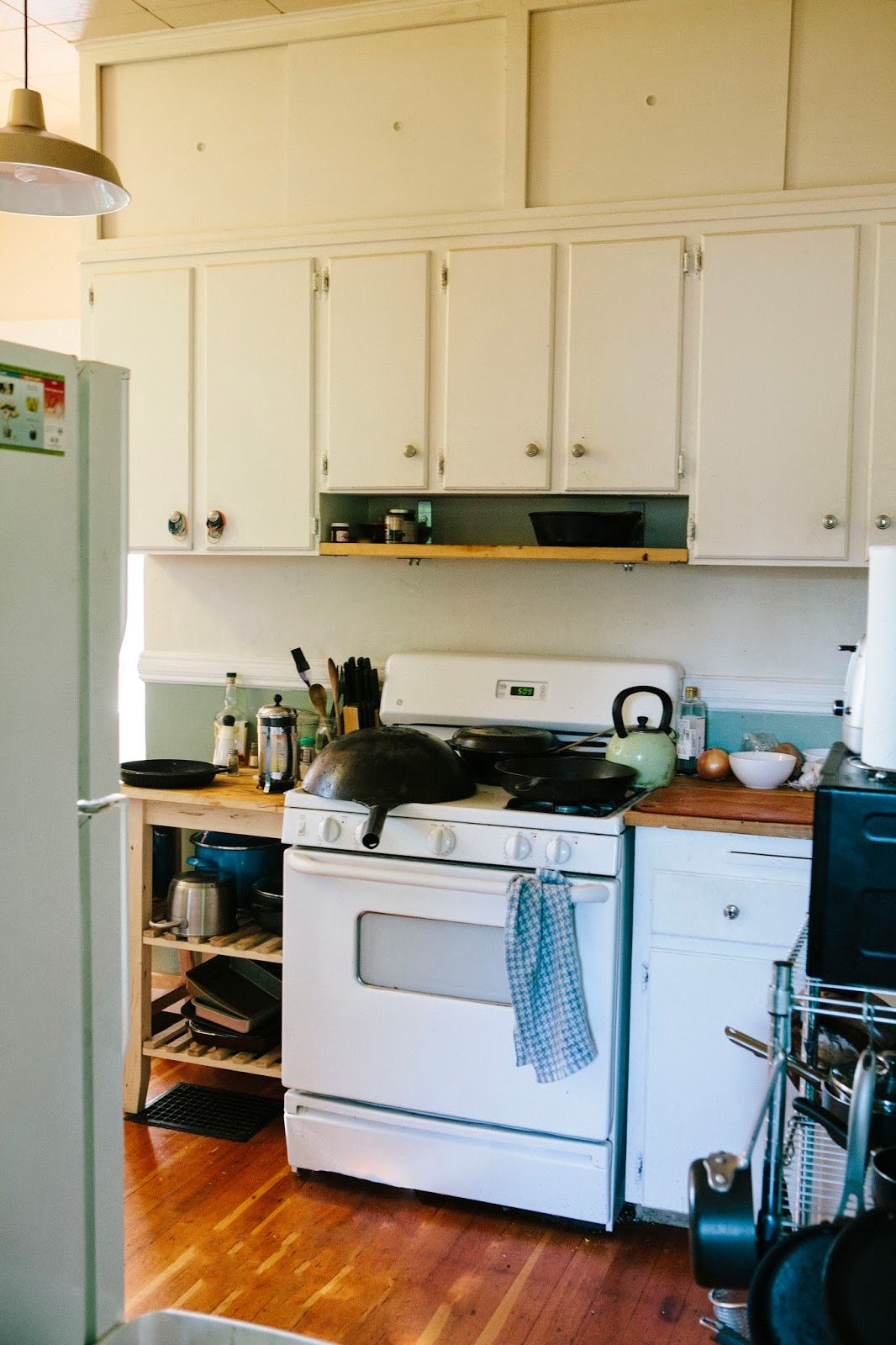 And this is where I cook now: 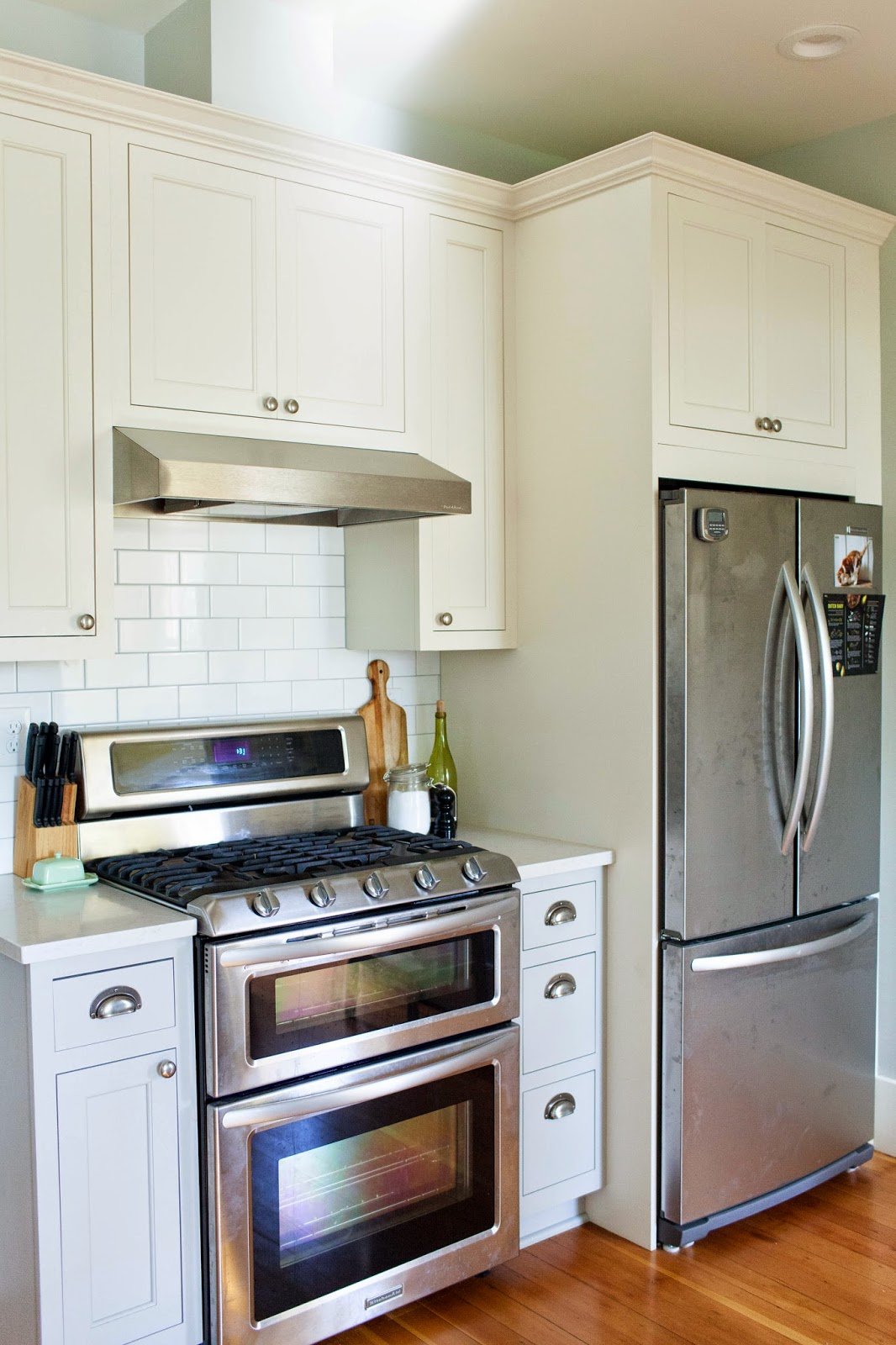 Functional storage, perfect with long and tall cabinets perfect for sheet pans, baking trays and bottles containing cooking oils and vinegars. Not to mention multiple drawers perfect for storing cooking utensils. All within an arm’s reach from the range and oven, minus any of the ugly clutter from before.
And you guys — I have a double oven. I know what a crazy luxury it is, but again, it’s prevented so many fights between me and Erlend. No more accusing each other of hogging the oven! The ability to cook dinner AND dessert at the same time! What a freakin’ dream.
Seen above:
—
BEFORE/AFTER: THE “FRIDGE” AREA
Remember how I used to have a friggin’ HUGE-ass fridge in the middle of my kitchen?! 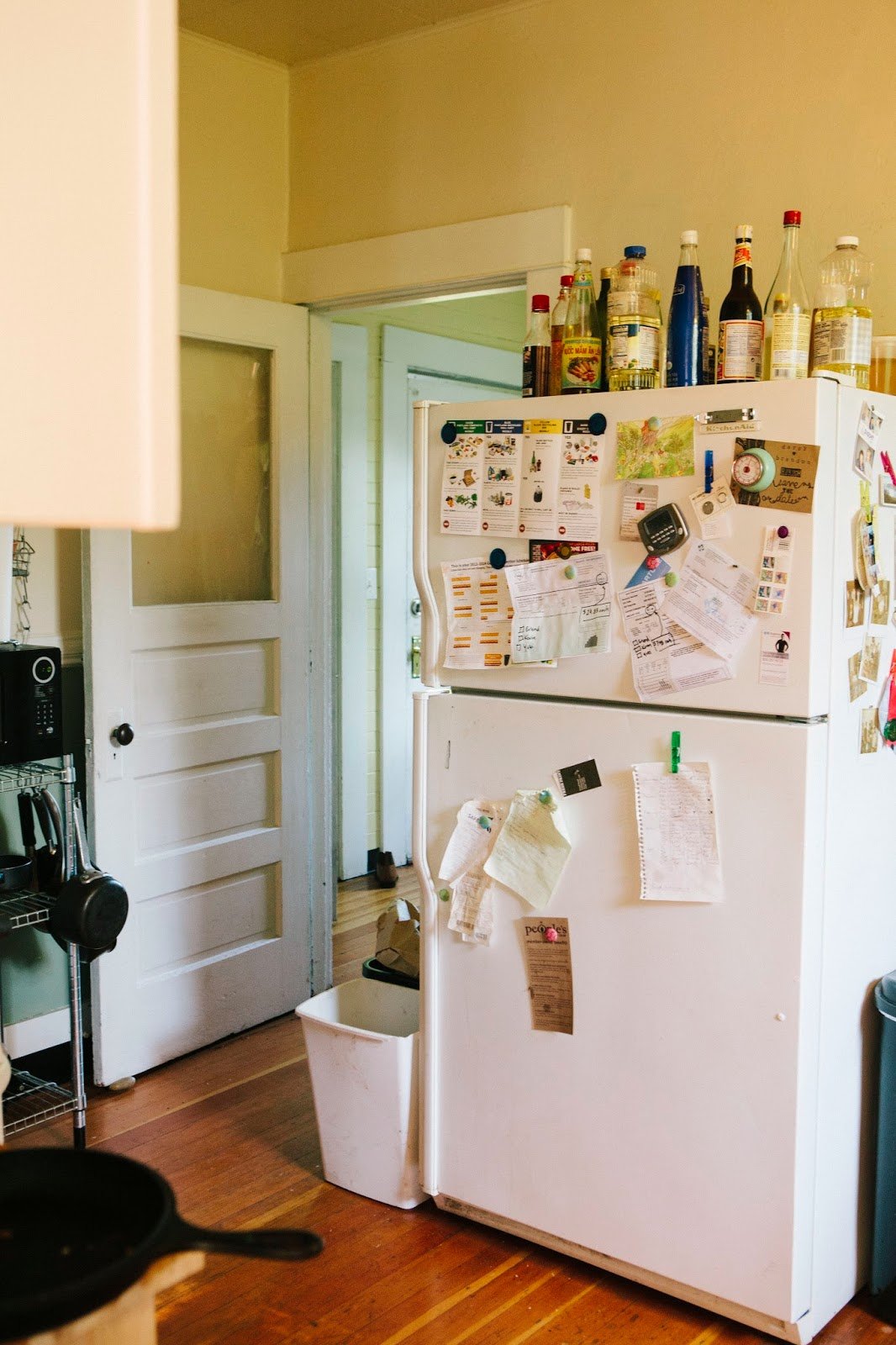 Well, I turned the area into something glorious. Something I hardly believe I have myself. Something that causes me to pinch myself everyday to make sure that it’s real.

I turned it into a baking station: 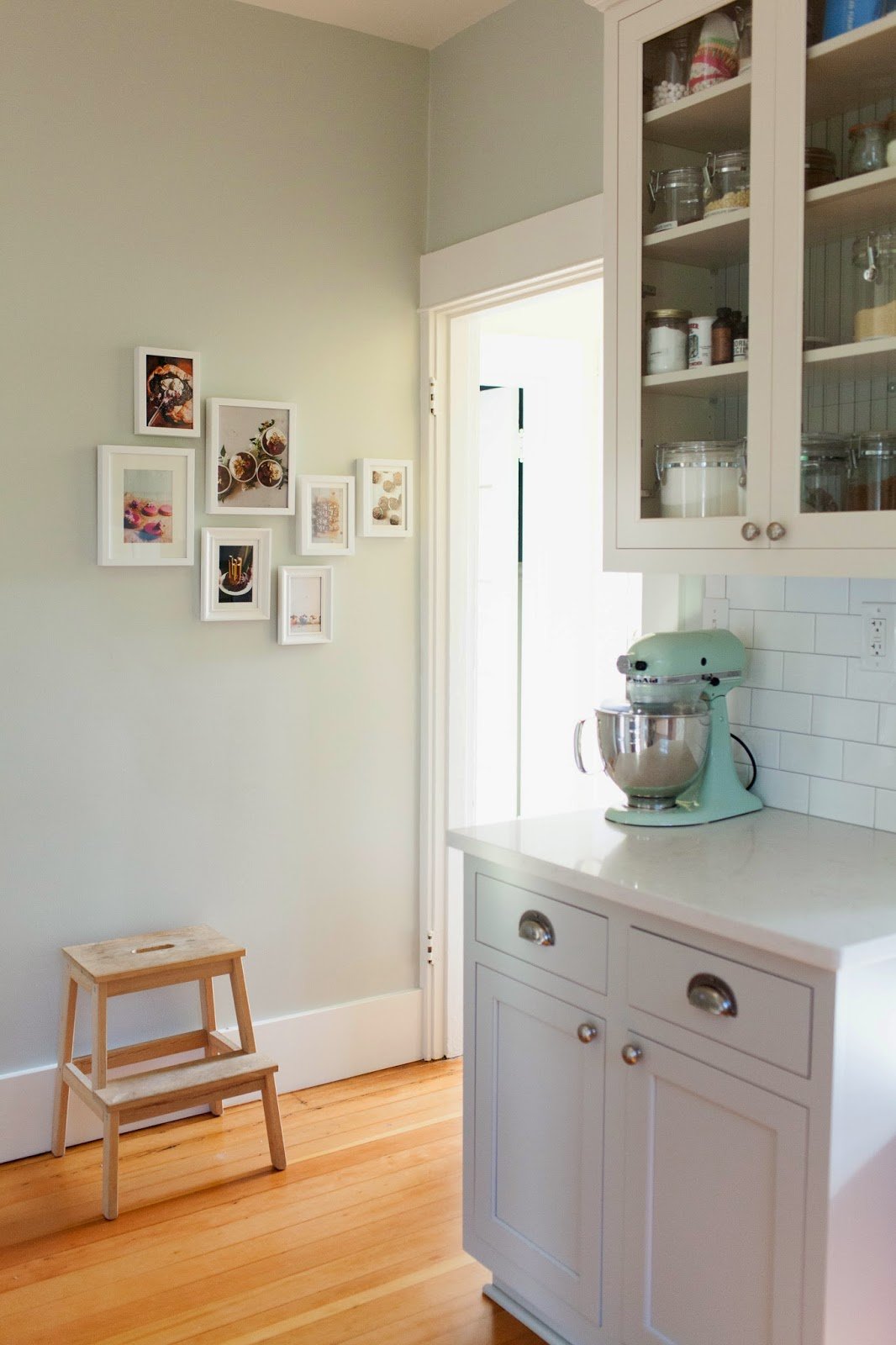 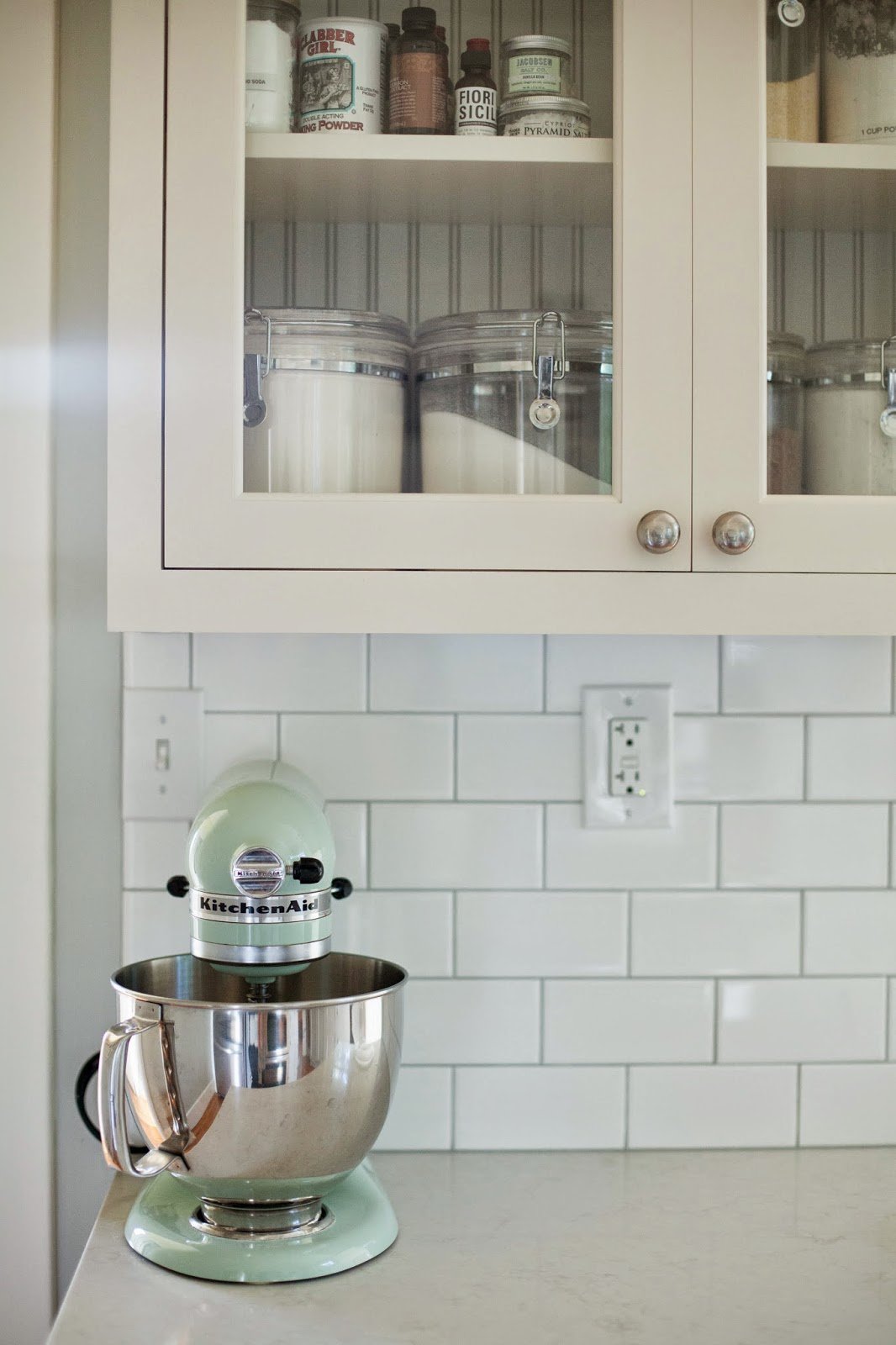 Seriously.
A BAKING STATION.
This counter area is specifically designated for my KitchenAid stand mixer. This is the counter where I roll out all my doughs, pastries and pie crusts, where I measure out all my cake and cookie ingredients. The drawers and cupboards below are filled to the brim with measuring utensils, spatulas, cake pans and pie plates. And right above the counter is a glass cabinet full of nothing but baking ingredients: 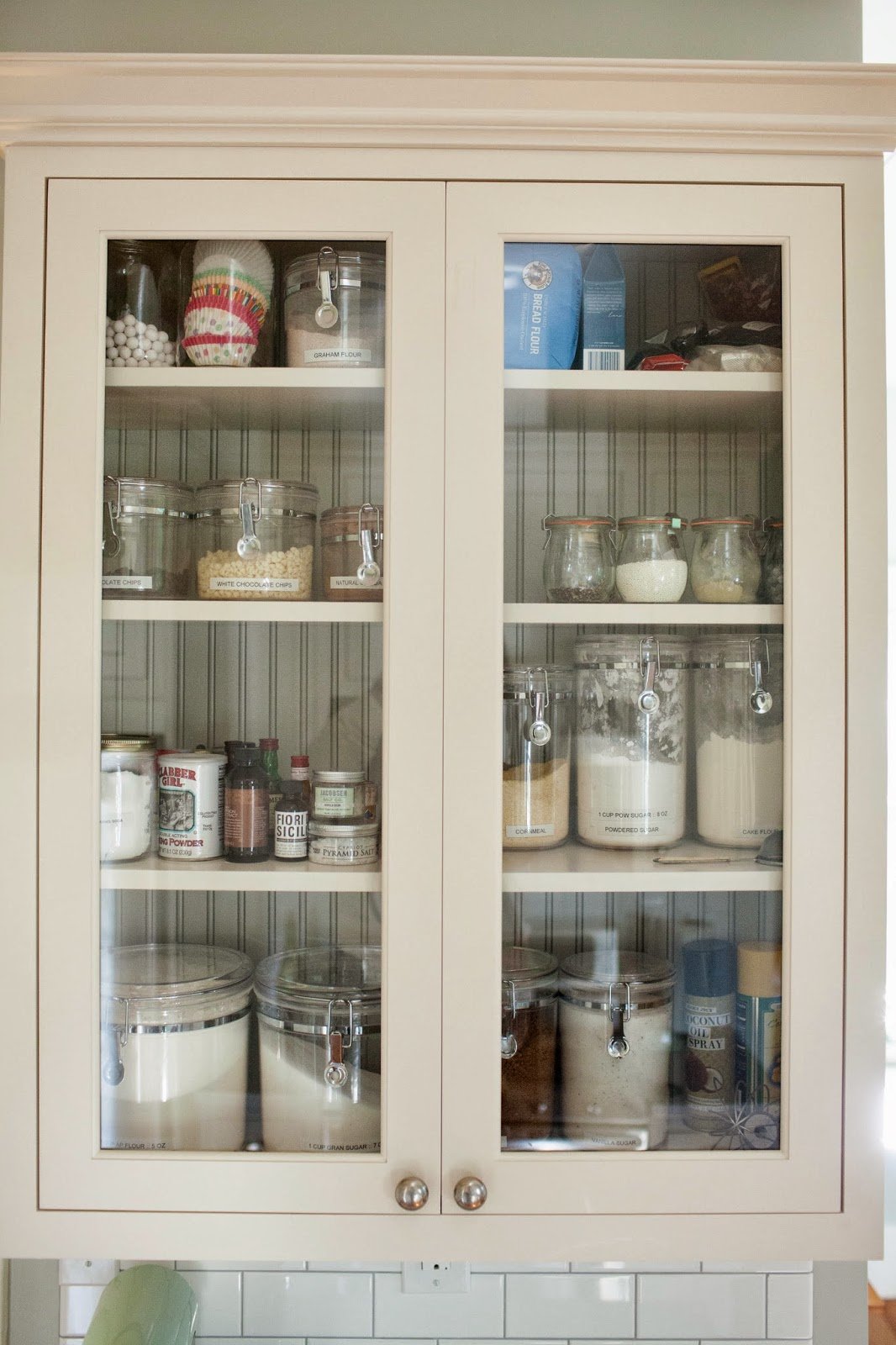 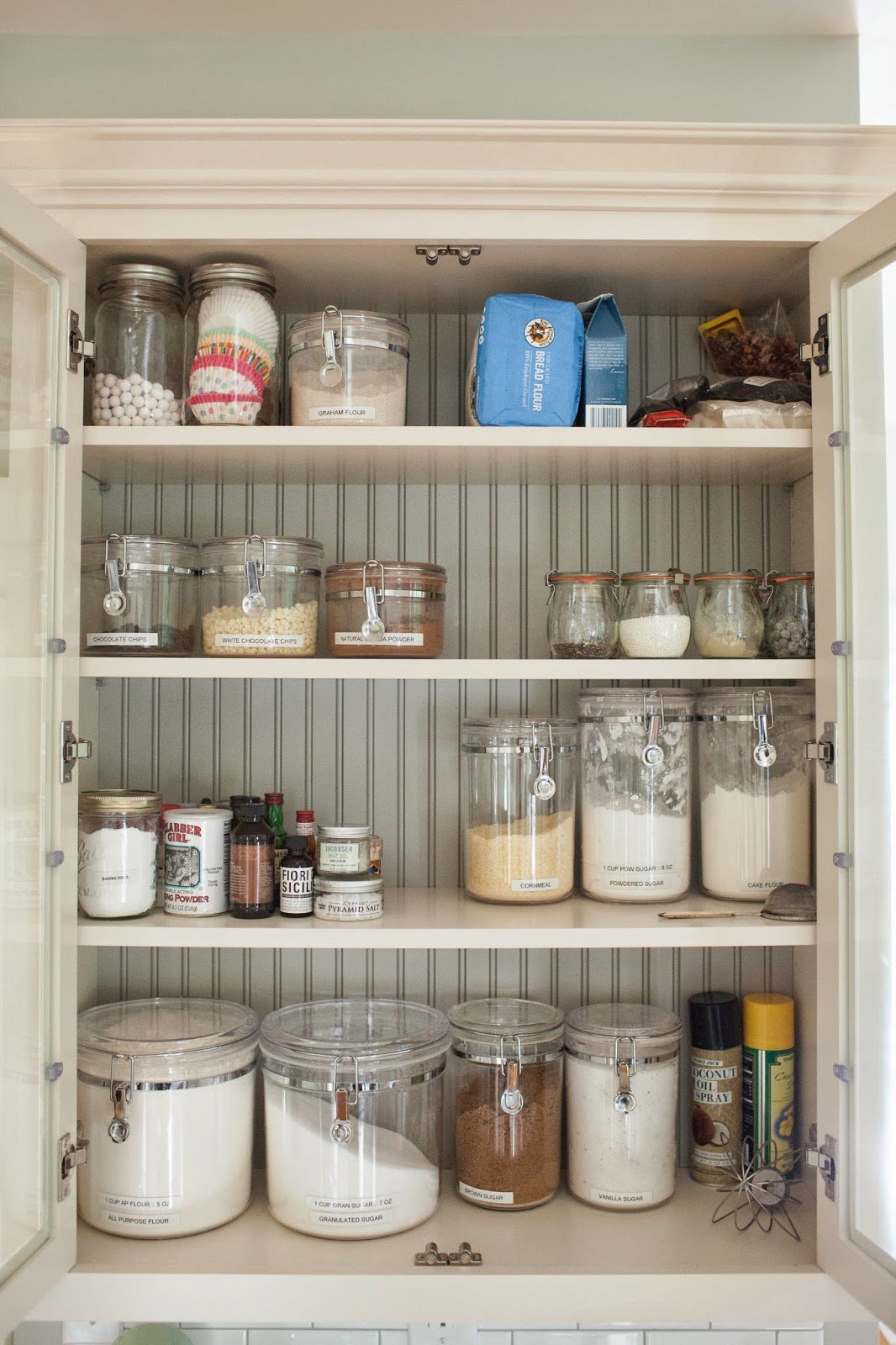 Now if you look closely, you can see how nerdy I really am — not only have I used a freakin’ professional label maker to label all my jars, I’ve also included the weight and volume measurements per ingredient. For instance, my giant jar of flour has two stickers: a label declaring it as all-purpose flour and a sticker reminding me that “1 CUP = 5 OUNCES”. 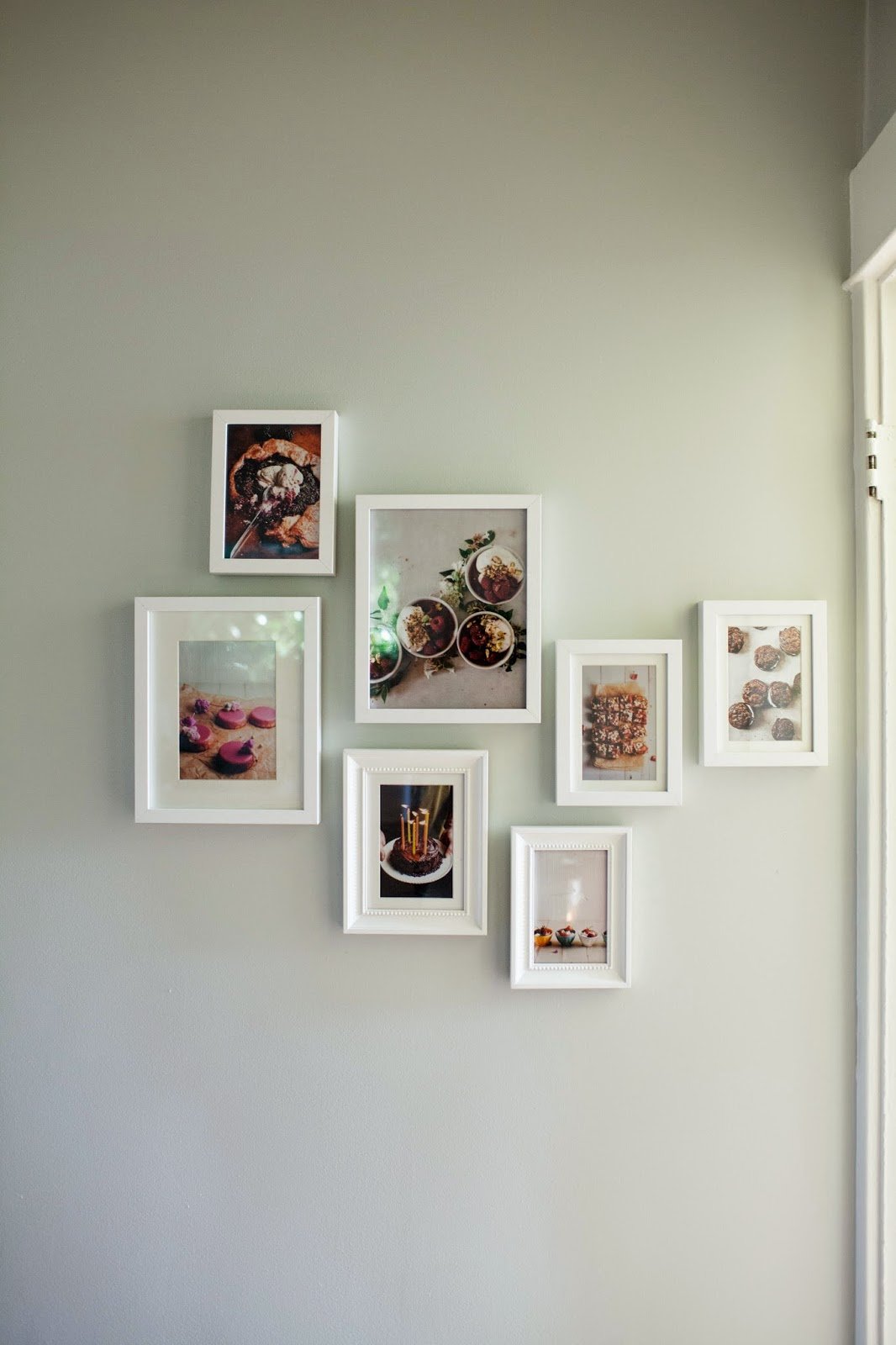 On the wall adjacent to the baking station, I’ve created a gallery of prints of some of my favorite pictures from recipes on the blog. Featured are the following: a rustic blackberry lime galette; salted chocolate, raspberry and pistachio pots de creme; rhubarb and white chocolate blondies; brownies and cream sandwich cookies; mini lemon sour cream pound cakes with beet glaze; yellow birthday cake and mini strawberry Eton messes.
Seen above:
—
BEFORE/AFTER: THE NOOK
Now, this is probably my favorite part of the remodel. Although the old kitchen also had a nook, it was oddly sealed off from the rest of the kitchen because of a decorative arch. Unfortunately, the arch blocked off all the wonderful light from the two windows inside the nook: 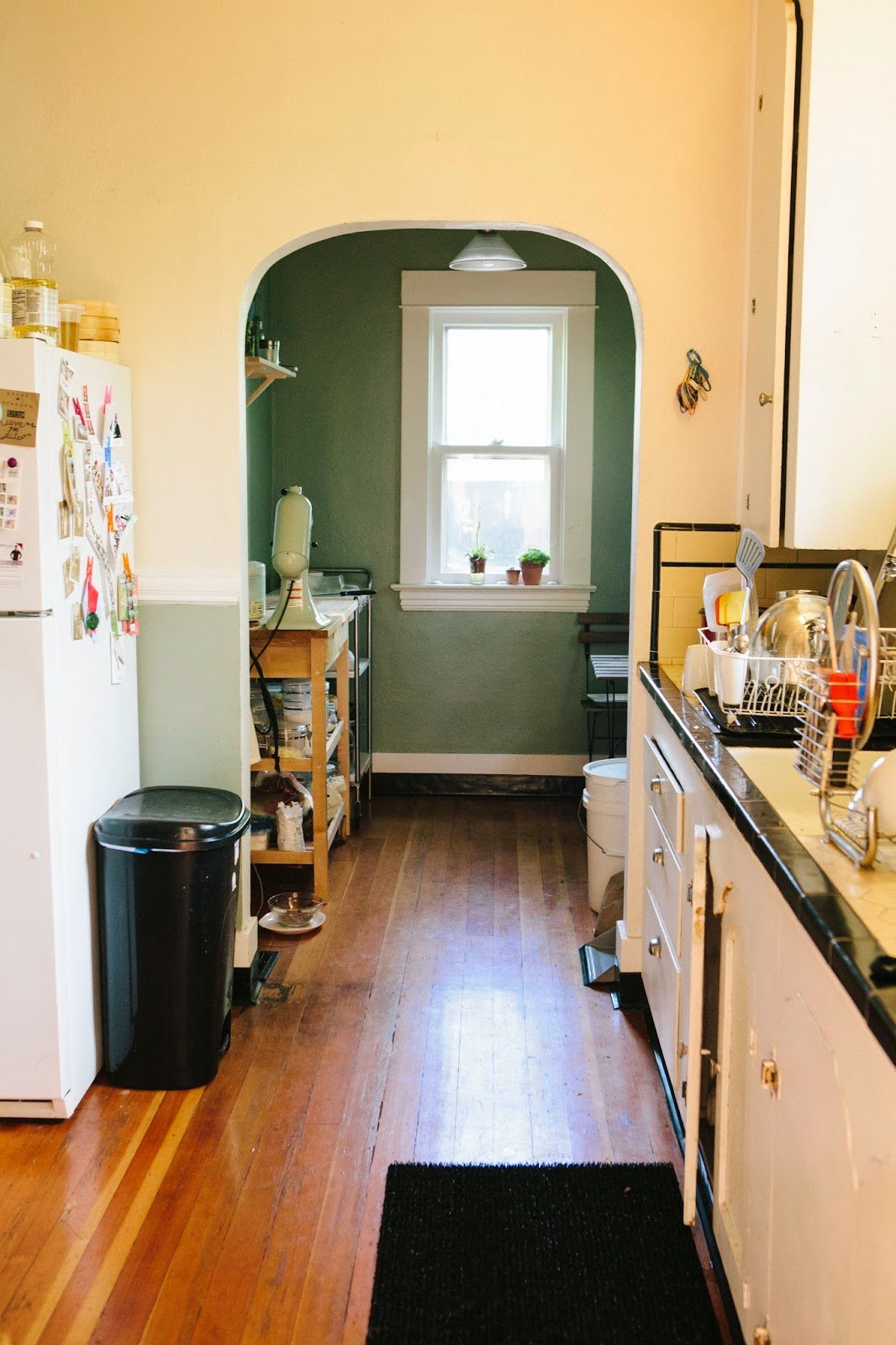 During the remodel, I made it a financial priority to knock down this arch and expand one of the windows to try and bring in as much natural light into the kitchen as possible.

This is the result: 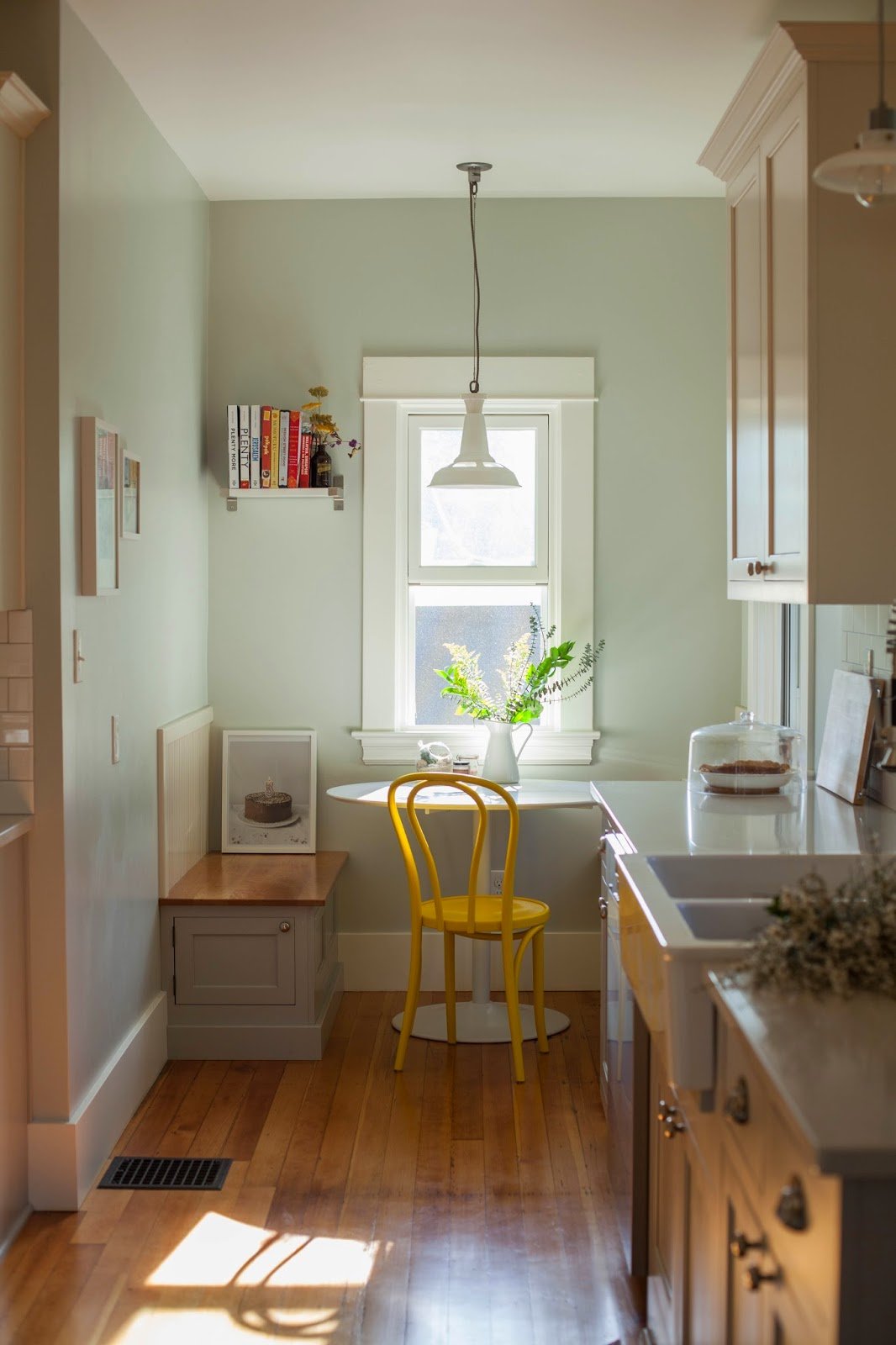 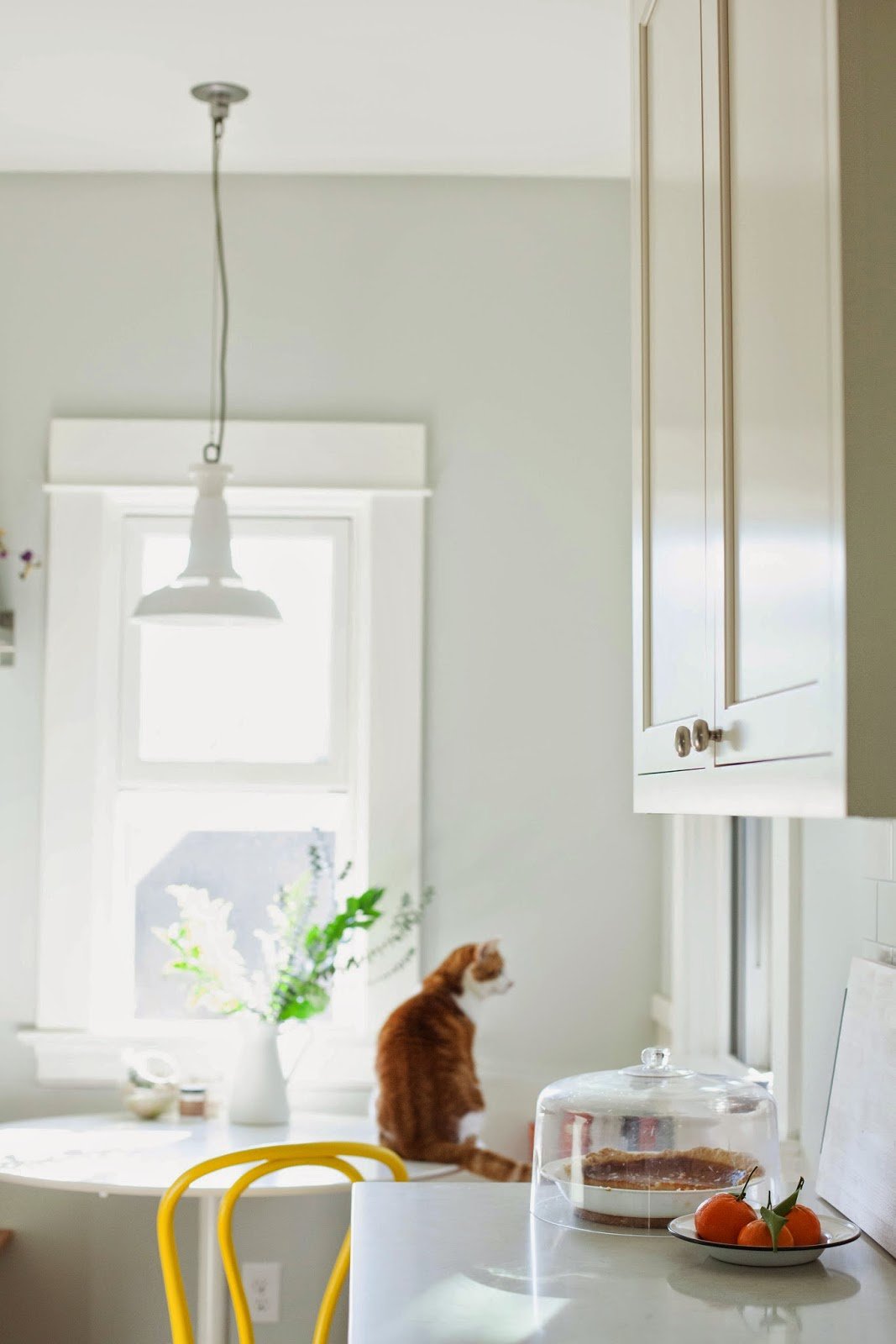 With the arch gone, I was able to expand the counters along the sink, giving me more counter and cabinet space than before. It made a world of a difference, really opening up the kitchen and streaming in more natural light than before.

Remember that a goal I had for my remodel was to be able to turn the kitchen into a place where we would actually enjoy lingering. I think this nook does that — the windows let in lots of lovely light, which makes it the perfect place to enjoy breakfast and lunch. Even at dinnertime, one of us is usually hanging out in the nook while the other person is cooking or cleaning in the kitchen. 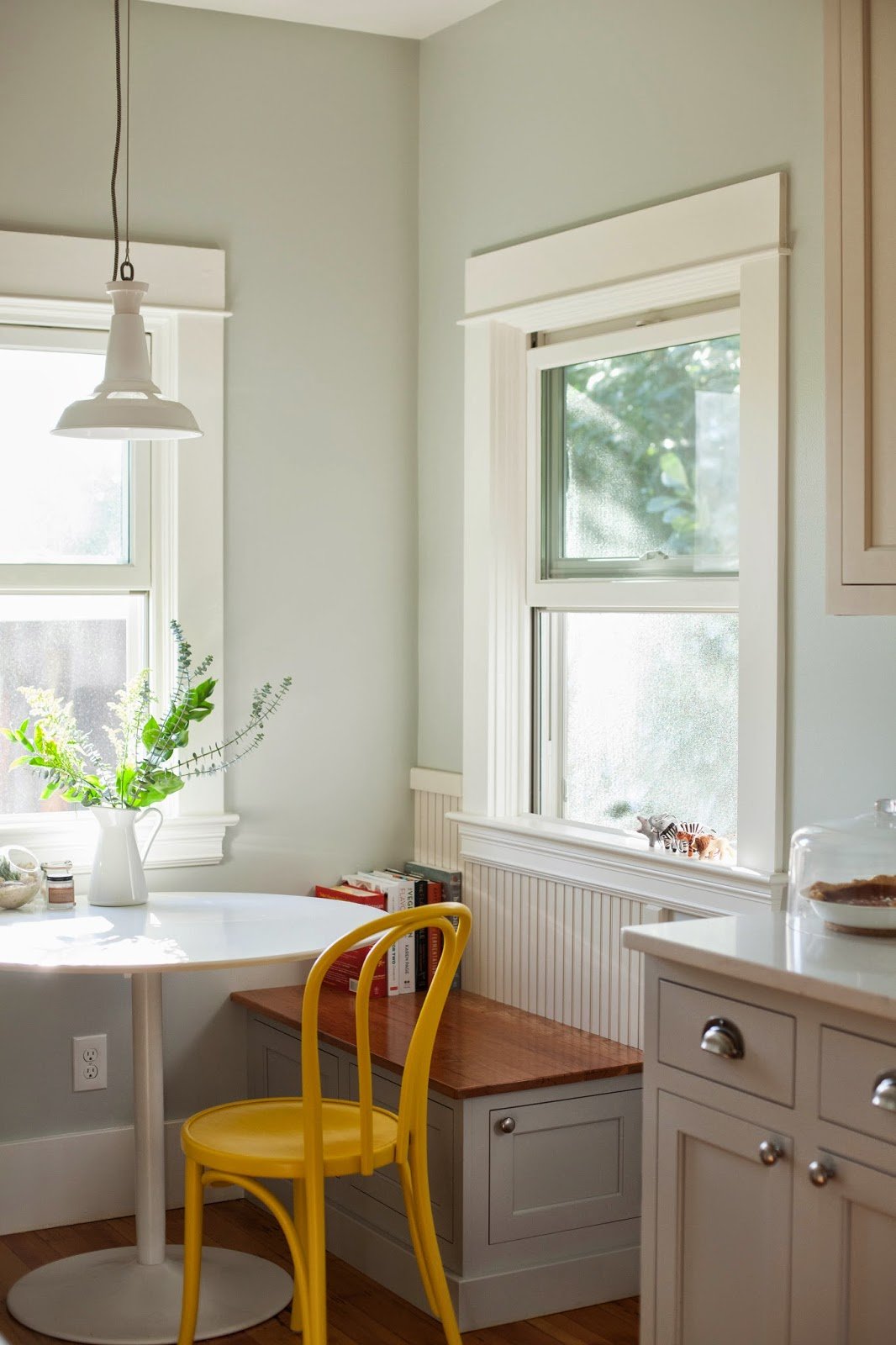 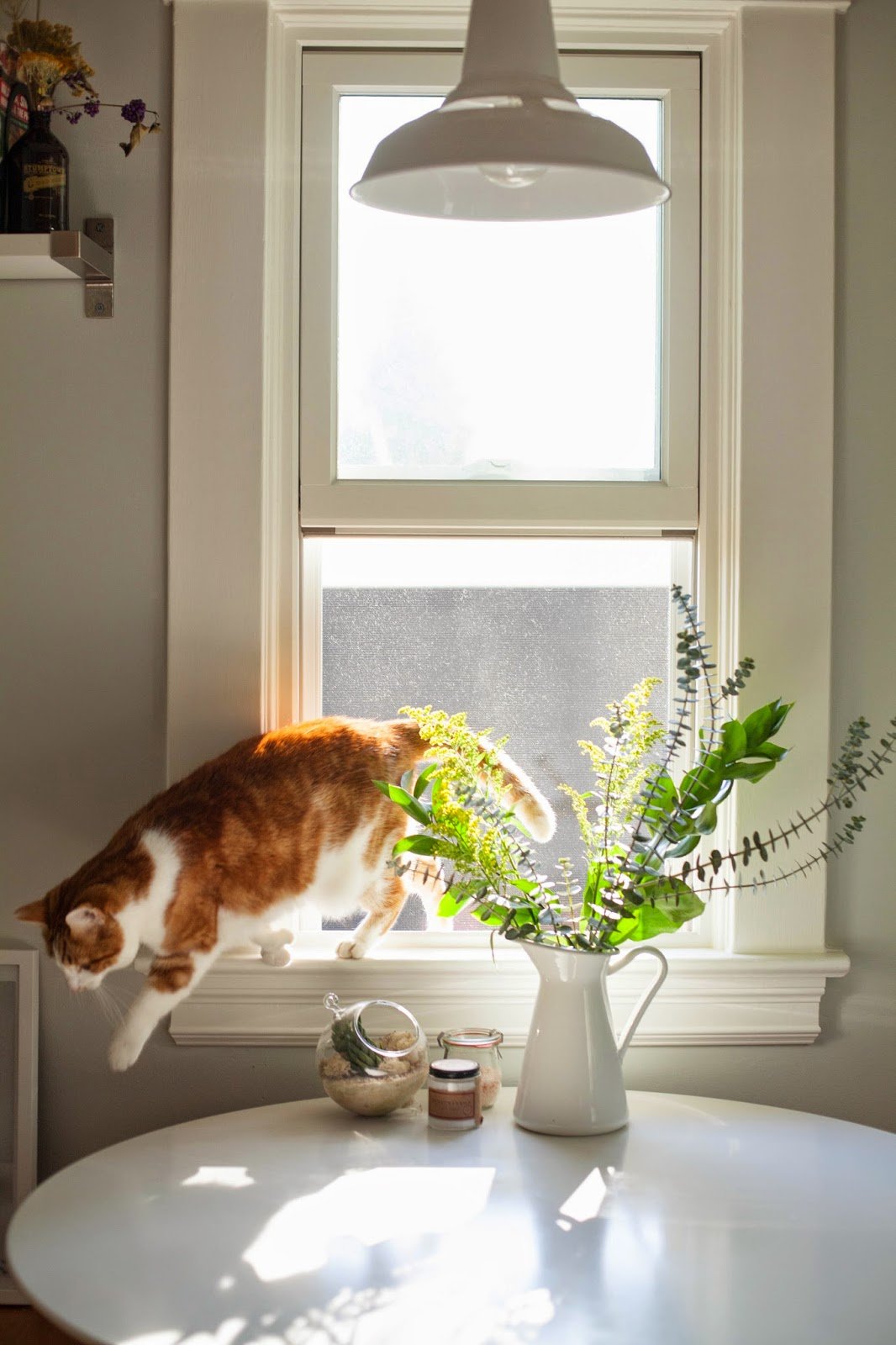 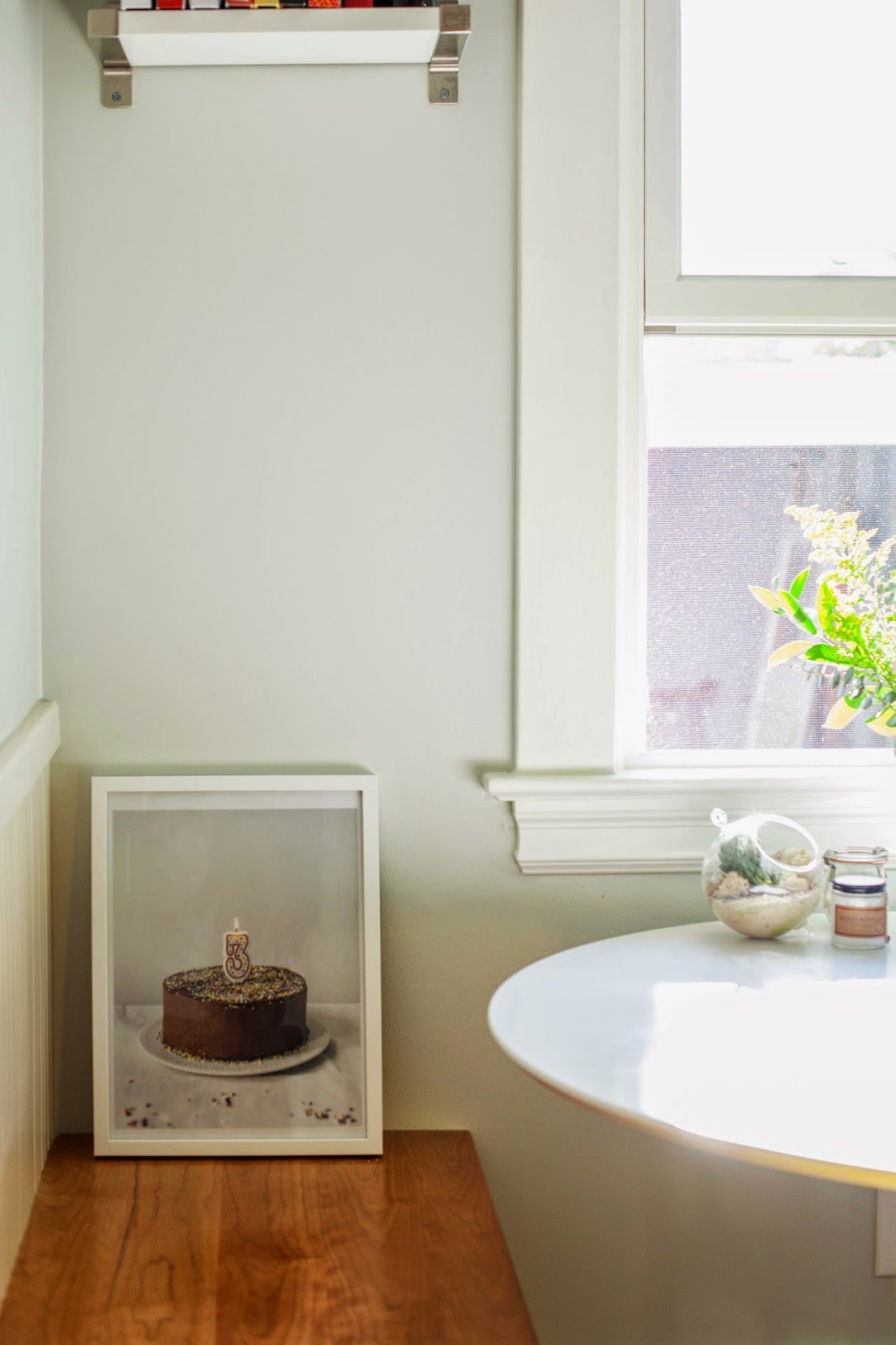 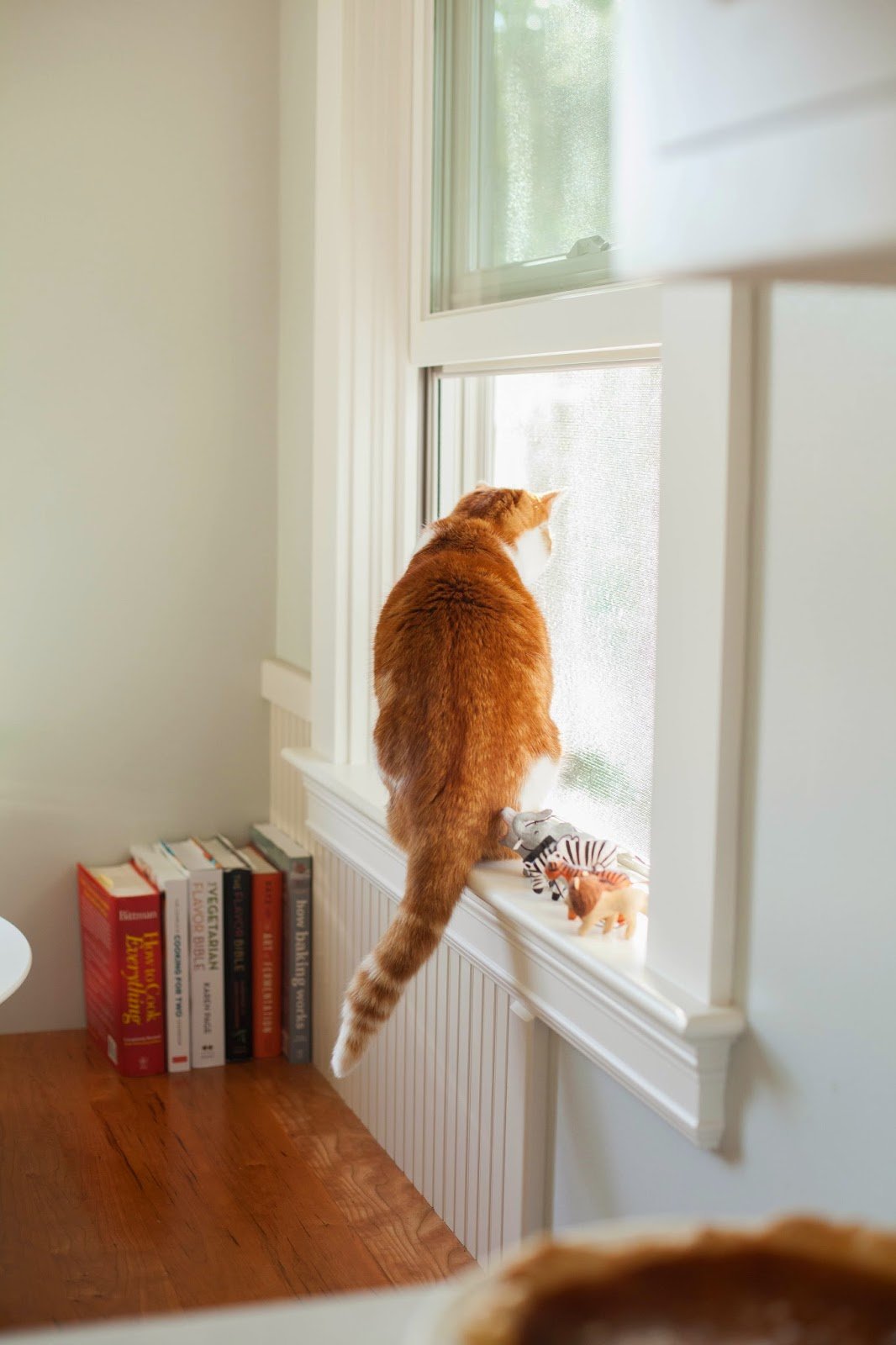 And there you have it!

Before I head out, however, I wanted to take some time to reflect. Back in January, Food52 ran an Instagram contest asking folks to share their tidy kitchens. Mine was one of the kitchens regrammed. While most of the comments were overwhelmingly positive, I noticed a handful on my picture and others regrammed that accused Food52 of only picking high-end kitchens that only rich people could afford. Some Instagrammers even left comments that the kitchens looked unlived in, and that many were purely for form and show.

Here’s the truth: yes, the remodel was crazy expensive — I’m embarrassed to say that it cost more than half of my annual salary, even despite consciously choosing several lower-end options (stock cabinetry and lots of Ikea, for instance). And here’s how I was able to afford it. It’s not sexy, but here’s my formula:

Lots of saving, sacrifice and help.

What does that mean? Saving high-paying bonuses from stressful, soul-sucking jobs that were so awful that I cried of relief and exhaustion every time I left the office. Living with too many immature and careless roommates who I absolutely hated and treated me disrespectfully for way too long. Guiltily borrowing a little bit of cash from my incredibly generous parents. But these are the sort of things that you don’t see on the blog, and it’s far too easy to sit back and judge. And even despite it all, I still know how incredibly lucky and privileged I am in the first place to have had all those opportunities, even the ones that left me feeling miserable and racked with guilt.

As for the claims that my kitchen looked unlived in and unused, I actually laughed out loud. Of course my kitchen doesn’t look like the picture you saw on Instagram!!! Hell, my kitchen doesn’t even really look like the pictures you see above! In reality, there’s a large unphotogenic drying rack by the sink, the double oven range is always splattered with grease and, on the counter, there’s a massive clear jar of fermenting rice that looks remarkably like vomit that Erlend’s studiously trying to coax into wine. There’s almost definitely a stack of dirty dishes in the sink and weird sticky puddles on every surface of the kitchen. But who wants to see that?

People come to Blog Land because we like the glimpses into other people’s lives; it allows us to quit our jobs and vicariously live in beautifully restored barnhouses in provincial France, wear designer clothing that we can’t afford and eat exotic food from far-reaching corners of the world without gaining a single pound. Bloggers are more than happy to provide that escape, but it’s important to remember that these are exaggerated moments and that what you’re seeing is everything at its best/shiniest/happiest/most Pinterest-worthy. It’s a rotten game to start comparing yourself to such unrealistic standards, and it’s one that is ultimately impossible to win. Because outside the frame of every shiny, sparkling picture, all of us have dirty dishes, shabby furniture and ugly rooms too. 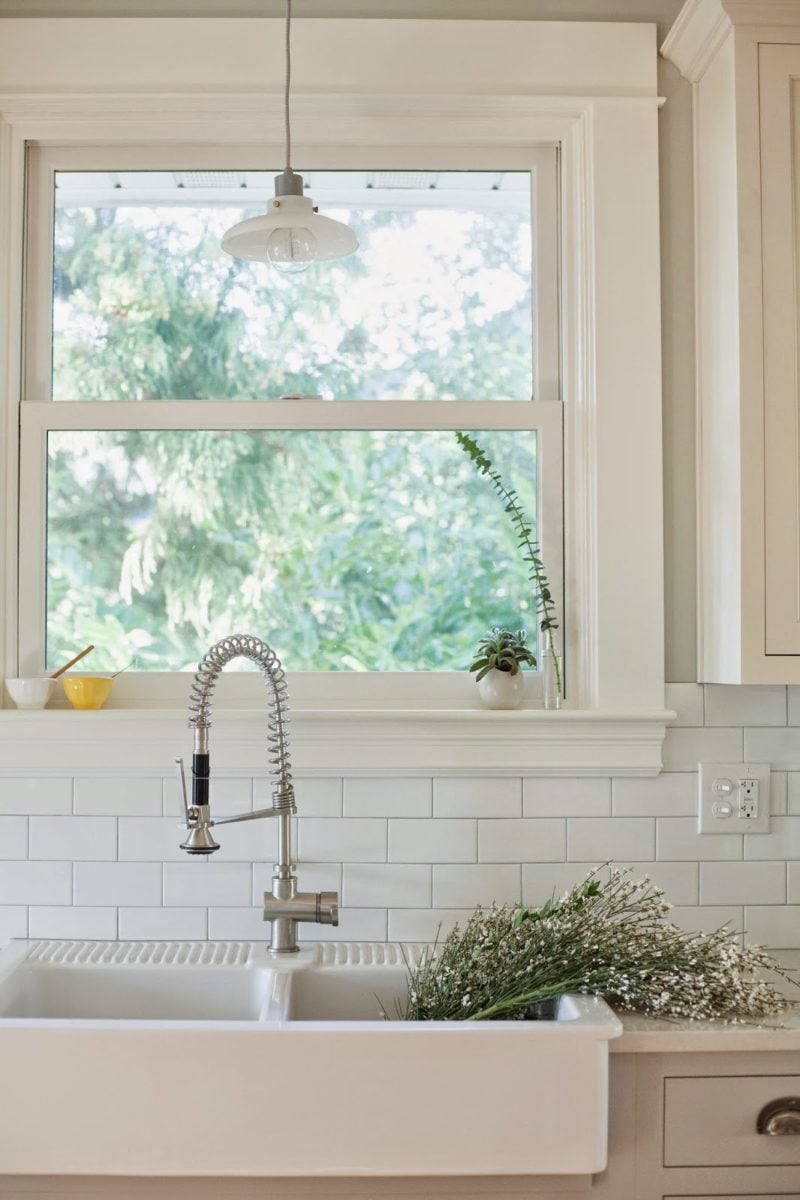 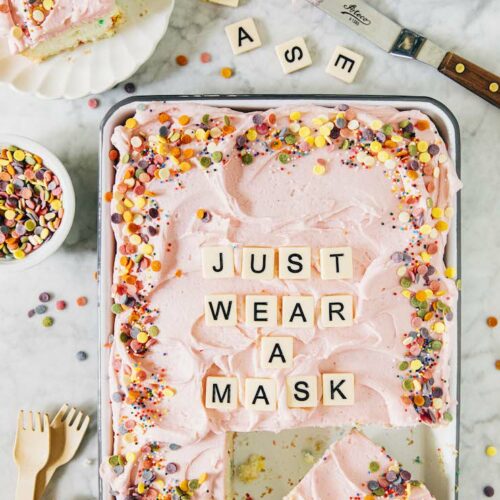 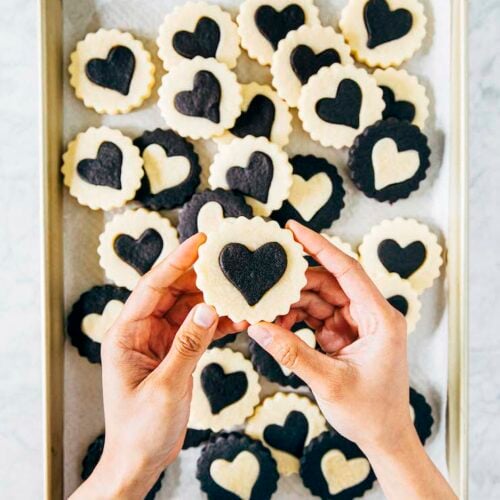 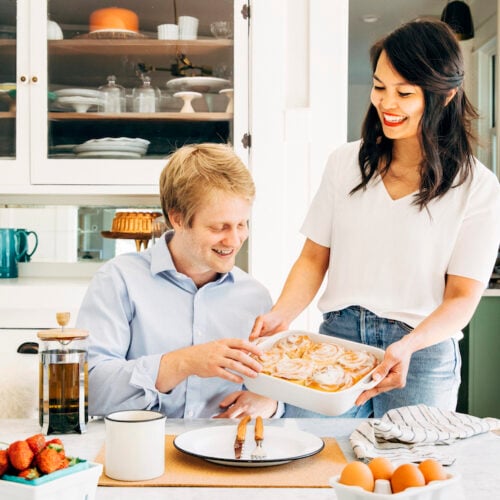