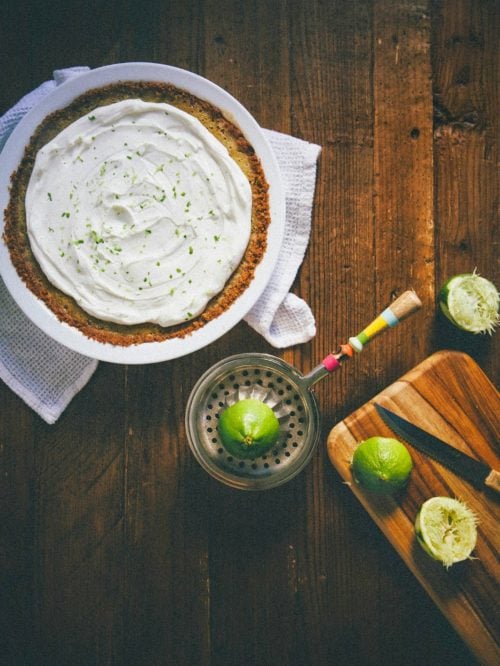 A few weeks ago, I instagrammed a picture of this pie with some exciting news: my boyfriend Erlend had just been accepted to one of his first choices for graduate school! I’m not sure what this acceptance means yet (that is, will we be moving to New York?), but I will say that I’m incredibly […] 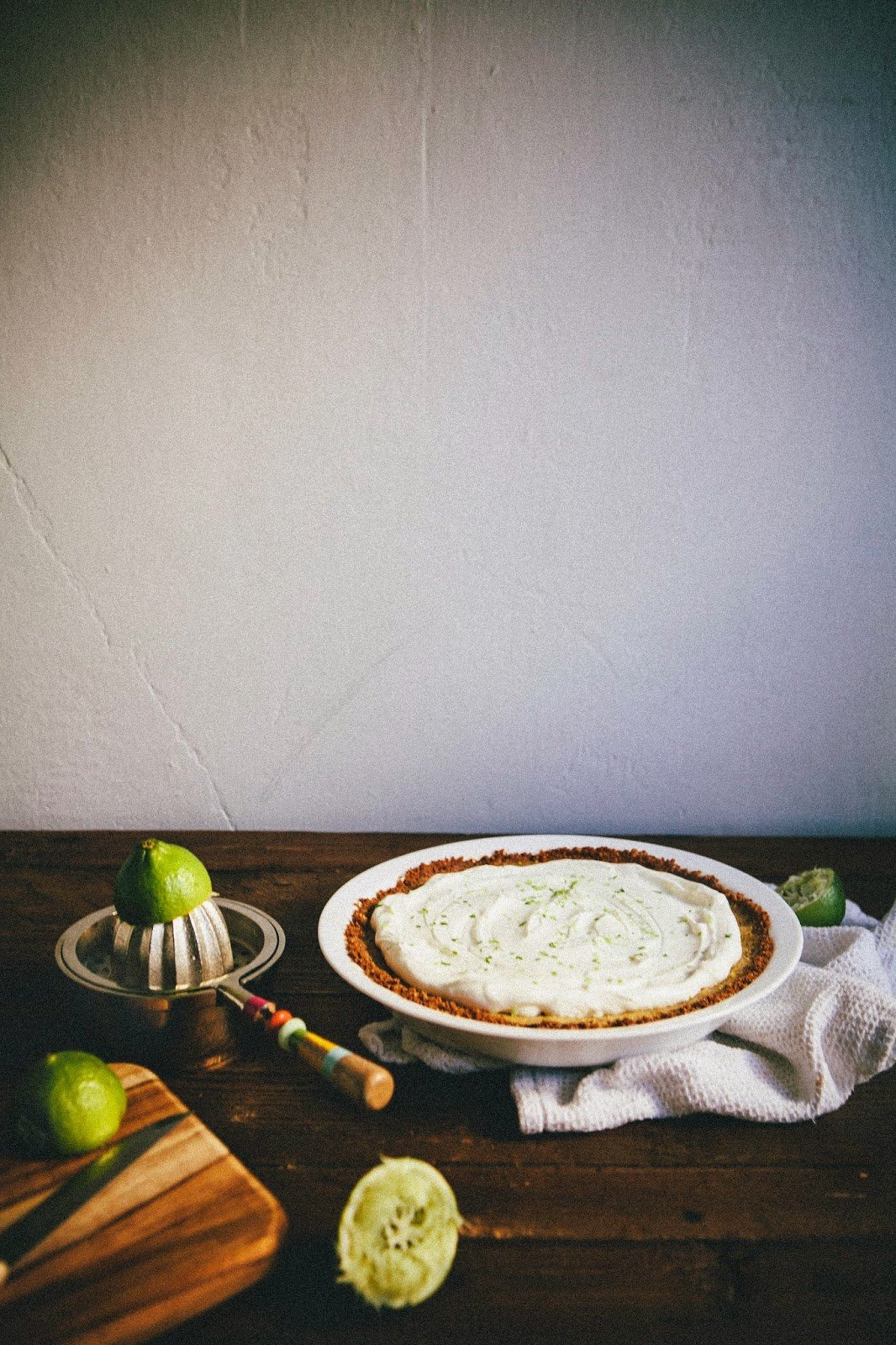 A few weeks ago, I instagrammed a picture of this pie with some exciting news: my boyfriend Erlend had just been accepted to one of his first choices for graduate school!

I’m not sure what this acceptance means yet (that is, will we be moving to New York?), but I will say that I’m incredibly proud of him. Since we graduated, Erlend’s been struggling to find a job and career track that he’s enthusiastic and passionate about. Over the last year or so, I’ve seen him become more and more excited about his chosen field of study, talking my ear off with crazy facts about the human body learned from books, classes and his internship at the hospital. I now know far too much about how the different muscles in different parts of your body work, believe me.

To celebrate, we went out to dinner at Kachka, Portland’s hip restaurant du jour, stuffing ourselves full of incredibly cheesy khachapuri and bowls of beef, pork, veal and onion dumplings. And even though Erlend’s never had the world’s biggest sweet tooth, I whipped him up this maple lime custard pie because it is my strong opinion that no celebration is complete without a decadent dessert: 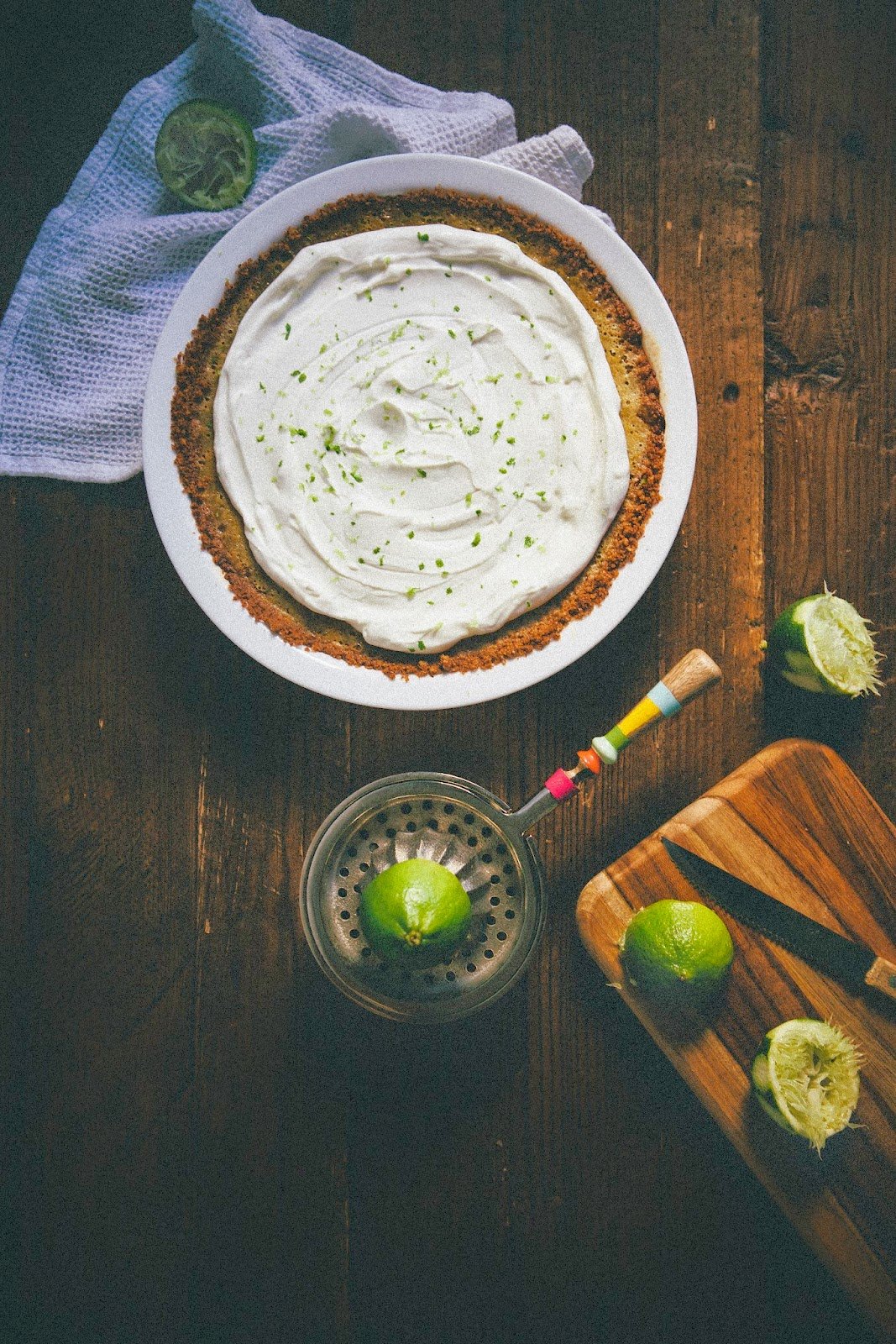 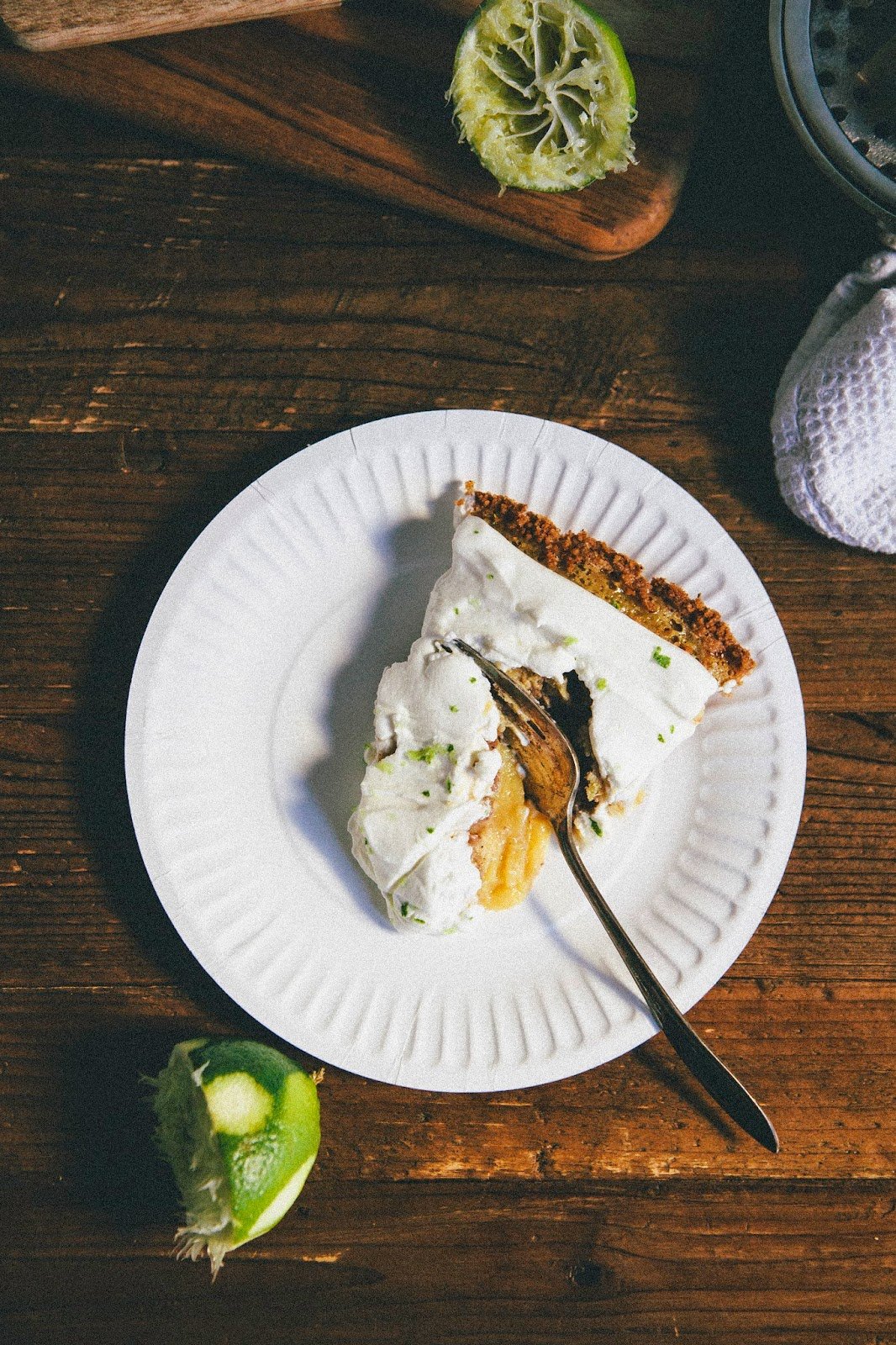 Maple syrup is one of the few sweets that Erlend can actually out-eat me at (although he argues that he can out-eat me when it comes to chocolate… but yeah, no). I remember feeling a mixture of surprise, disgust and ultimately, admiration the first time I watched him pour almost an entire half of a bottle over a stack of crepes on our first brunch together. And of course, having spent most of his childhood summers and winters in Vermont, Erlend is a bit of a maple syrup snob — it’s Grade B or bust. Lucky for me, his parents had just sent us a parcel containing a massive jug of Vermont maple syrup from their last winter trip there. This pie would not have been possible without it! 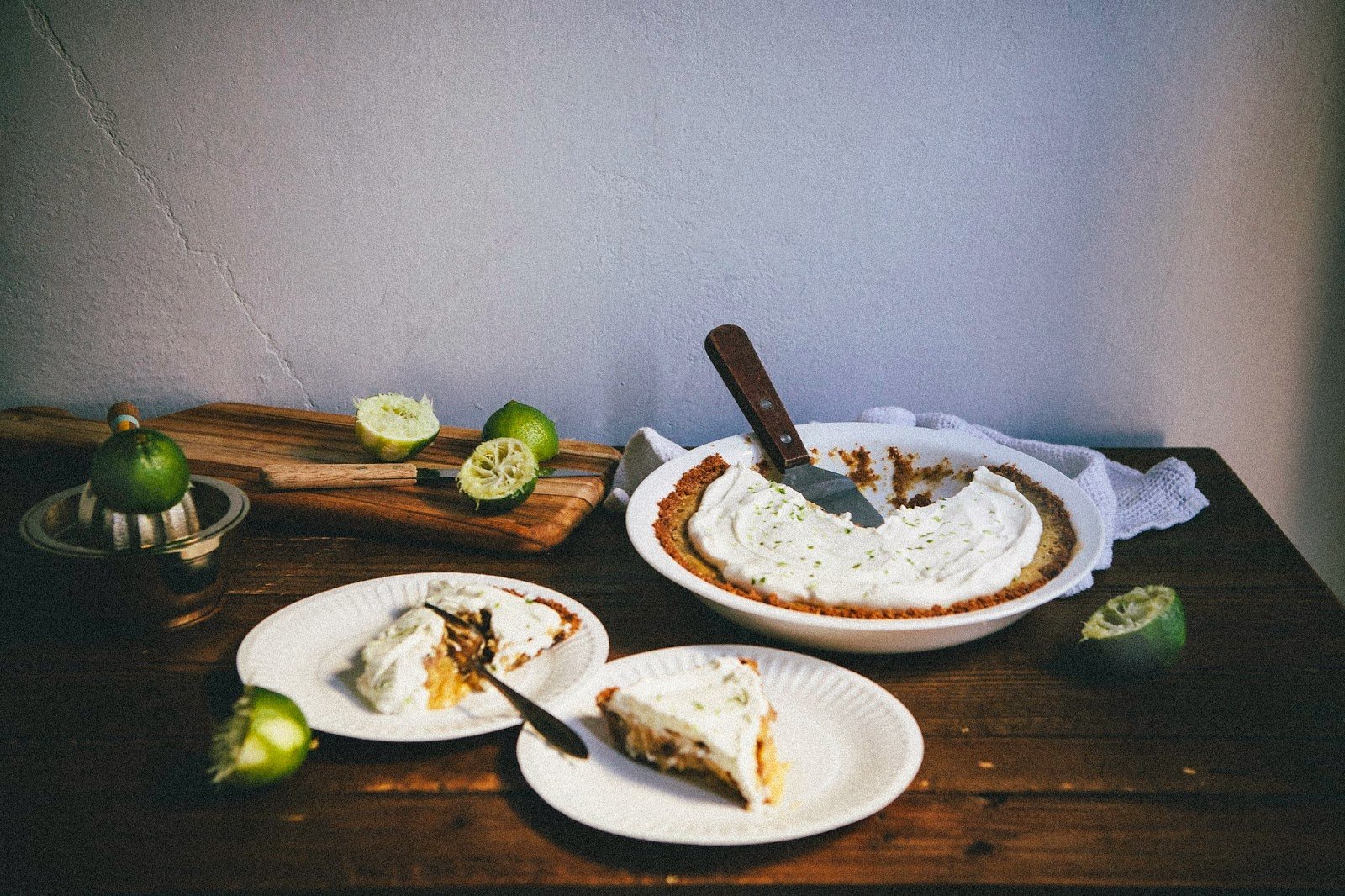 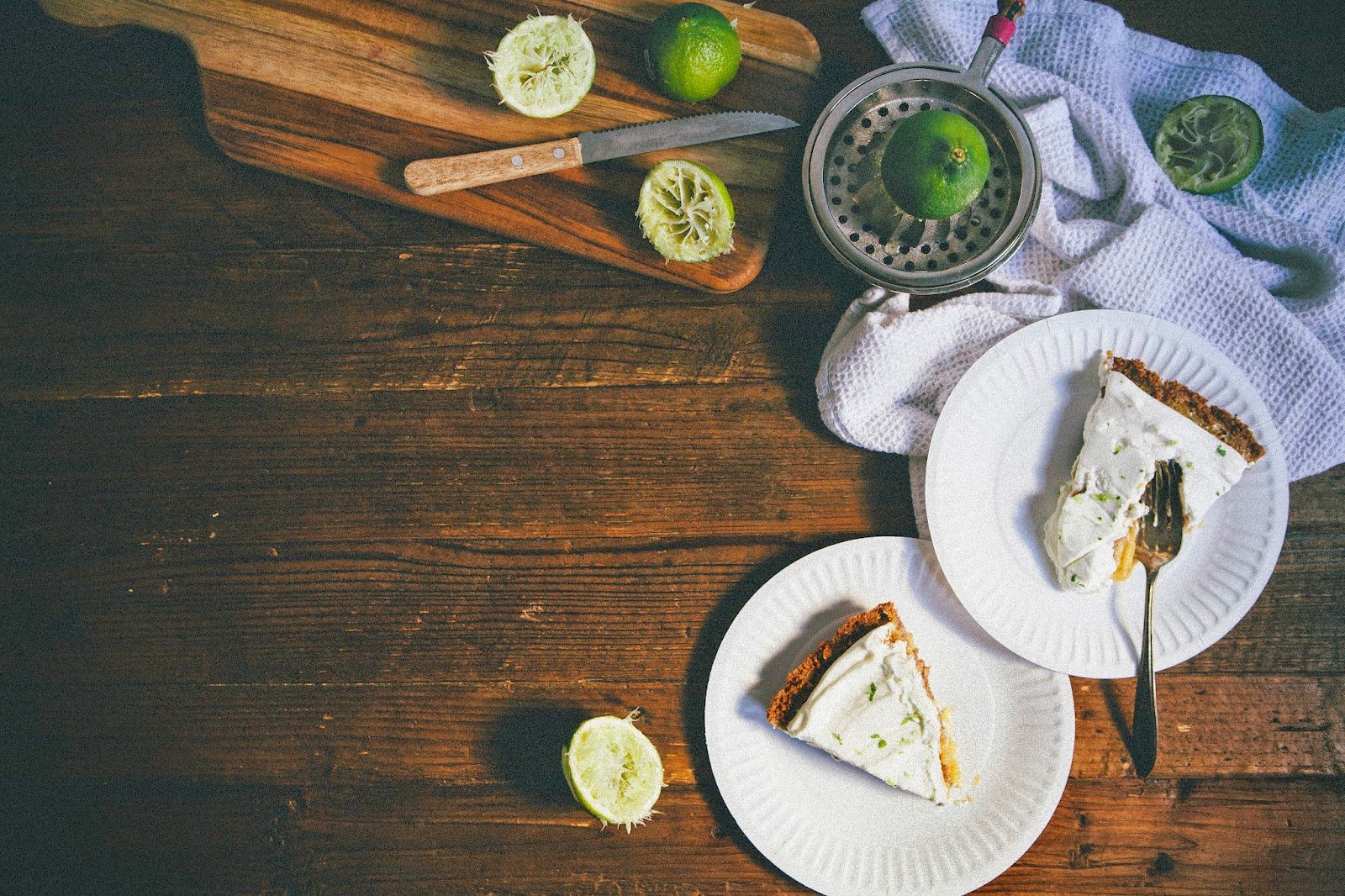 As for the actual recipe itself, the pie comes from the Four & Twenty Blackbirds Pie Book, a cookbook full of recipes from the famed Brooklyn pie shop. According to the cookbook, the maple and lime combination was actually inspired by a salad dressing (of all things!). I must admit that, although Erlend was incredibly enthusiastic about the flavor, I was skeptical at first. Maple and lime? Really? It seemed a little too out there for me, and this was coming from somebody who’s previously used beets, rosemary and saffron in various cakes.

Upon first bite, however, I was convinced. A maple custard on its own would have been far too sweet — the lime gave the custard a citrusy, tangy bite that balanced out the cloying sweetness and intensity of the Vermont maple syrup. 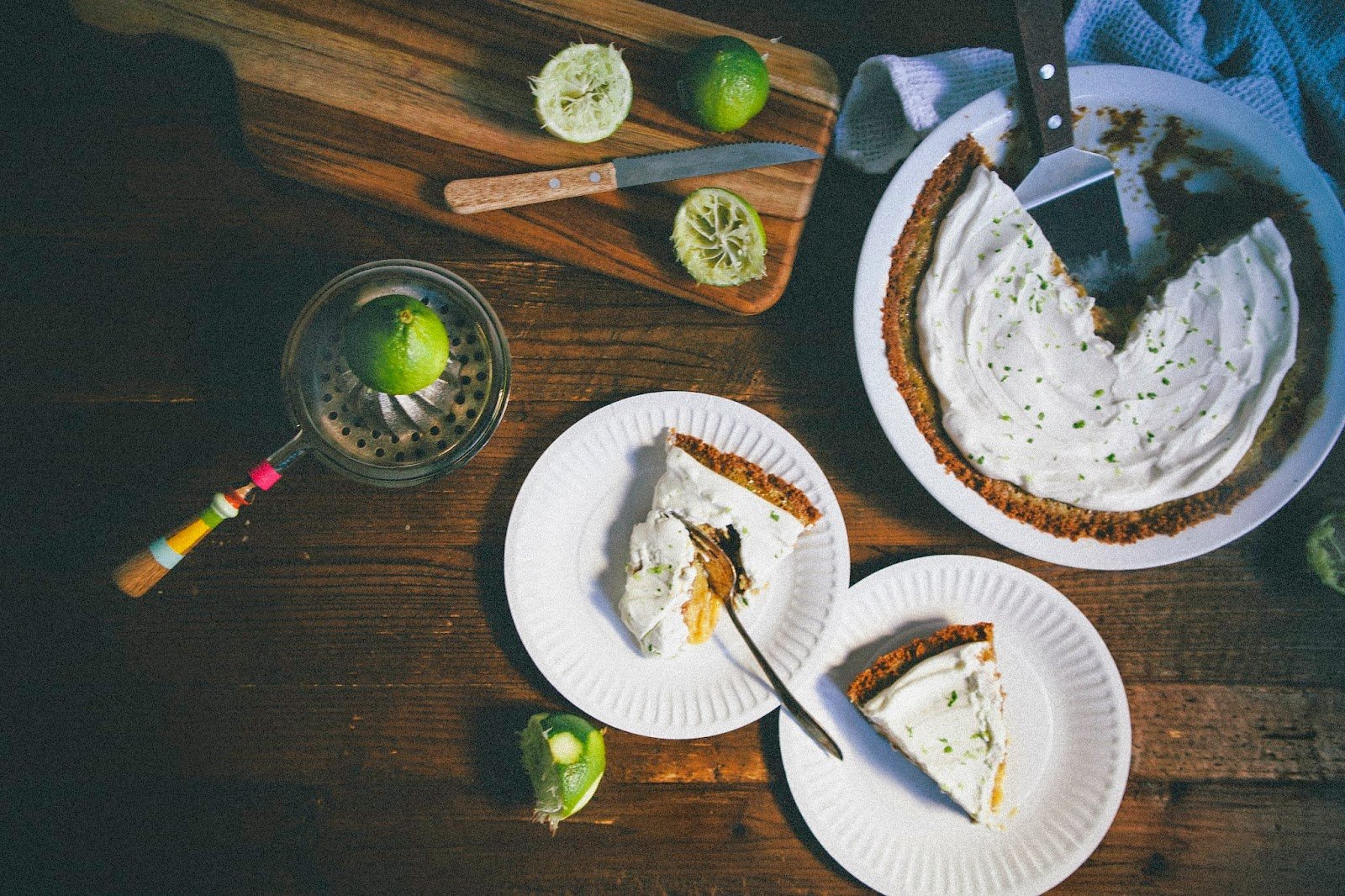 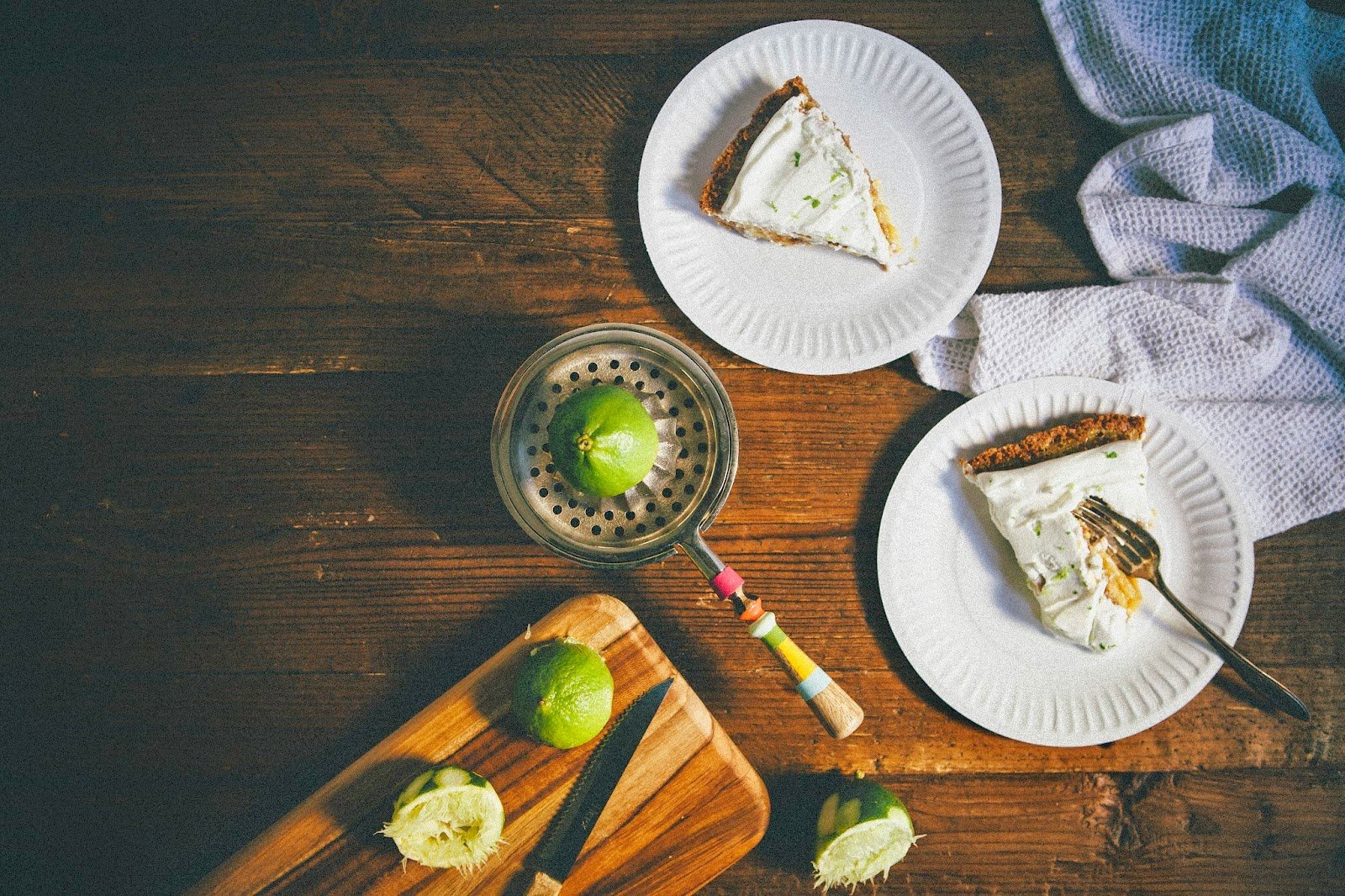 And with regards to the rest of the pie, I basically made no alterations to the cookbook’s recipe. The pecan biscotti pie crust is the bakery’s take on a traditional graham cracker crust, just with crushed ladyfingers and spruced up with some pecans. The only change I made was adding an extra layer of crème fraîche whipped cream on top of the custard, which I did only because Erlend has a fondness for especially tart desserts. 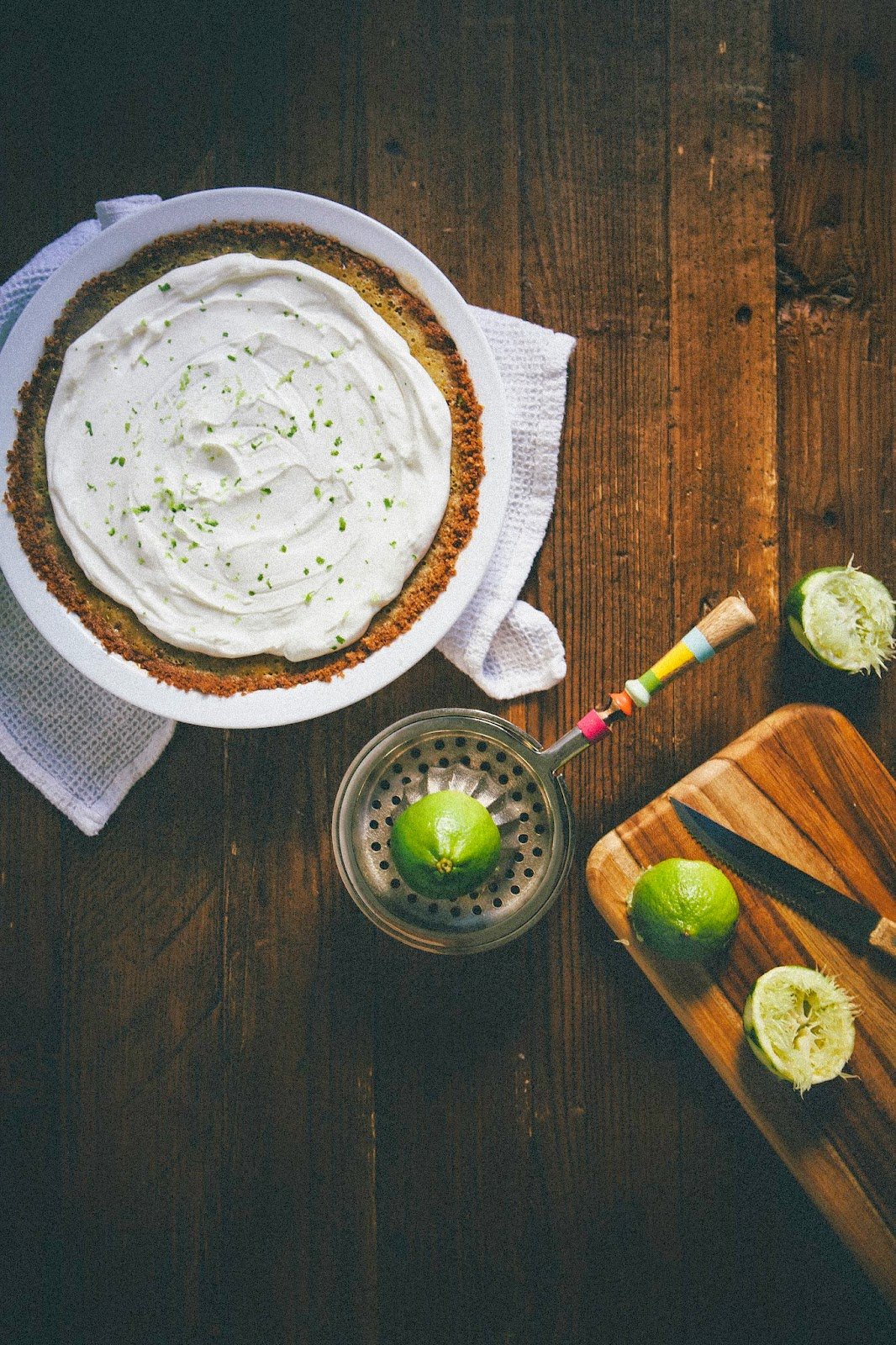 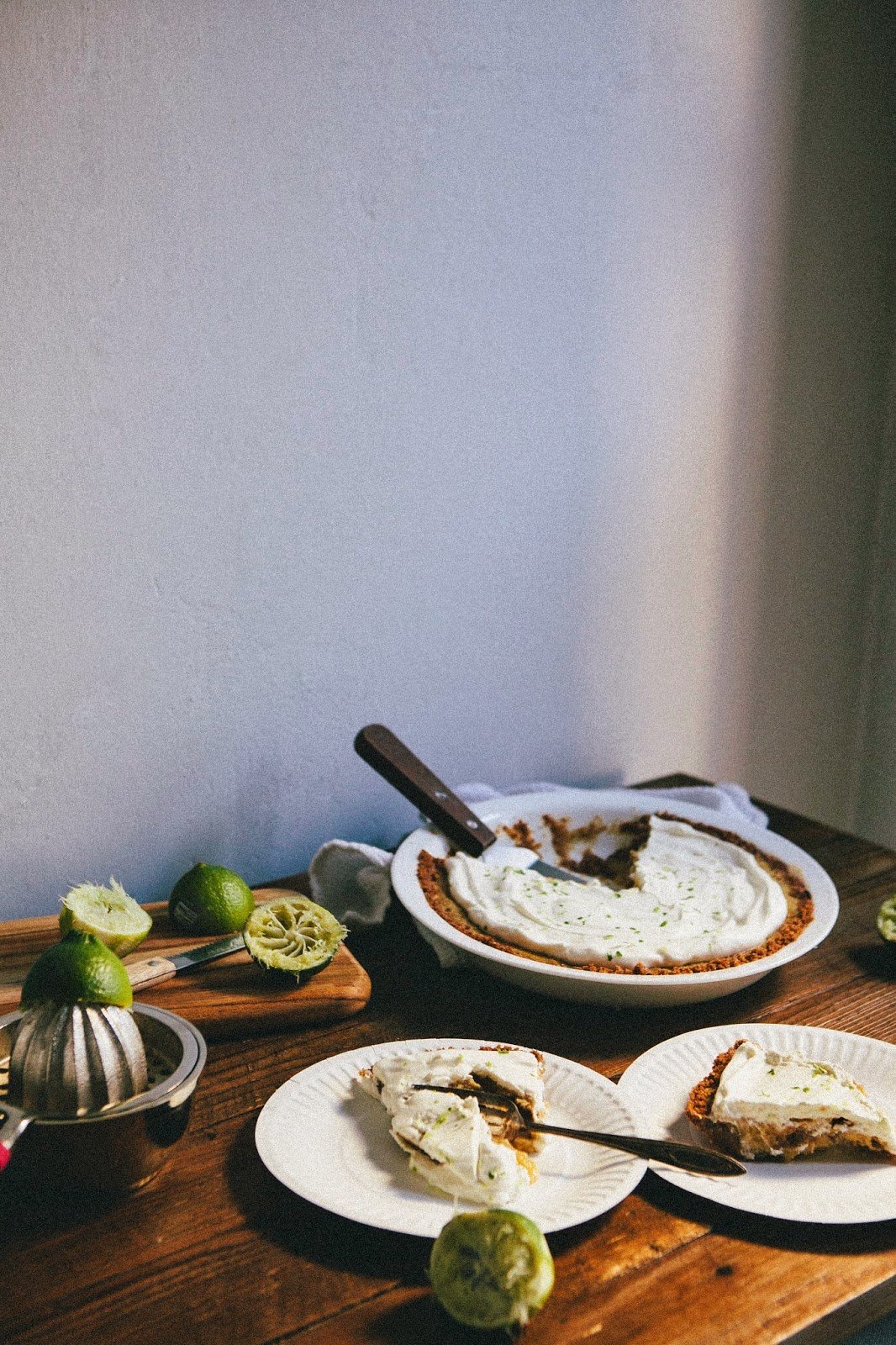 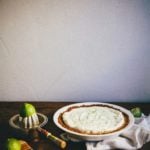 For the Maple Lime Custard Filling 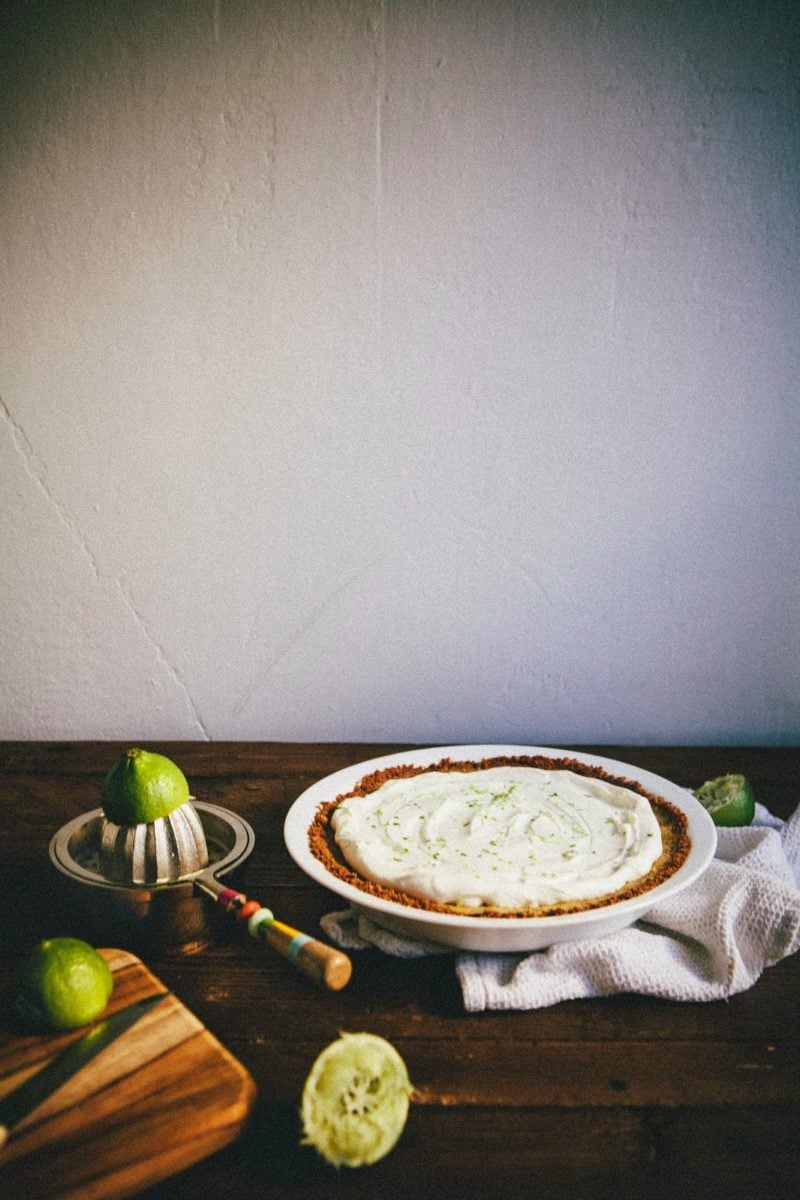