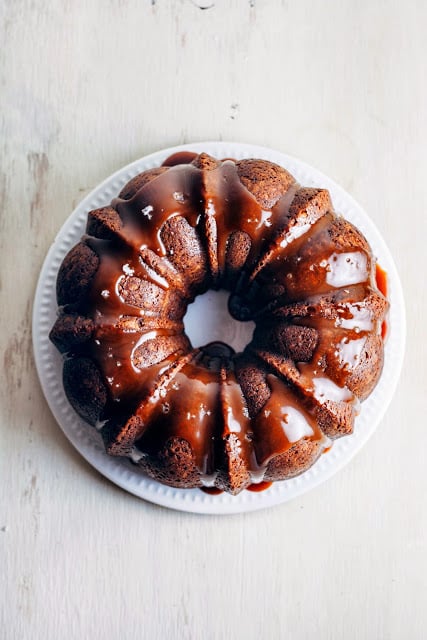 Recently, I purchased a Kindle and decided to reread all of my favorite books from my teenage years. But the truth is, I didn’t read great literature when I was a teenager. I read a lot of the books that had big, flashy displays in the young adult section of my local Barnes & Noble, […]

Recently, I purchased a Kindle and decided to reread all of my favorite books from my teenage years. But the truth is, I didn’t read great literature when I was a teenager. I read a lot of the books that had big, flashy displays in the young adult section of my local Barnes & Noble, series like the Princess Diaries and Gossip Girl. I was curious to see how these books would hold up as an adult (though I certainly wasn’t expecting anything groundbreaking).

I started with the Sisterhood of the Traveling pants series. My best friend in high school and I devoured these books. The series begins with four high school girls, each with their own distinct personality and subsequent crazy adventures, and follows them through four summers as they mature and grow. As we read and reread the books together, we saw a little bit of ourselves in each of the characters. My friend Katherine resonated with the character Lena and her inability to go after what she wants. I was fascinated by Bridget‘s impulsiveness and Carmen‘s hot-headedness, two traits I didn’t have myself but often wished I did to make my teenage suburban life more interesting.

Reading the books, I had a feeling that I couldn’t quite place. The characters and plot lines were as familiar to me as some of my childhood memories, despite the fact that ten years have passed since when I picked up the first book in 2003. It was like going back to a childhood place where nothing’s really changed. Well, except for one thing — me. As I read the books, I realized that although everything was still the same, I was looking at them through a lens made from my own growth and subsequent experiences. And what a difference that made! For instance, in my teenage years, I had absolutely adored Lena’s story when I was young, living vicariously through her allegedly beautiful appearance and her dramatic misadventures with a handsome Greek boy. But now I grew impatient with her one-dimensional personality and her lack of agency and self-confidence. In the past, I had flipped through Tibby‘s story impatiently. But now, as I read the books, I realized how much her character’s experiences must have resonated with Katherine, whose father had died from lung cancer when we were younger.

My new perspectives towards the books’ various characters and plot lines made me realize how much time had actually past since their inception, and how much I had changed and grown too. It’s a funny thing, growing up. You don’t really notice that you’re doing it until you stop and look back towards the past. For a long time, I thought the only way to do this was to visit the place you once called home, but it’s only now I realize that there are other ways to do this too — through books, music, and even recipes. 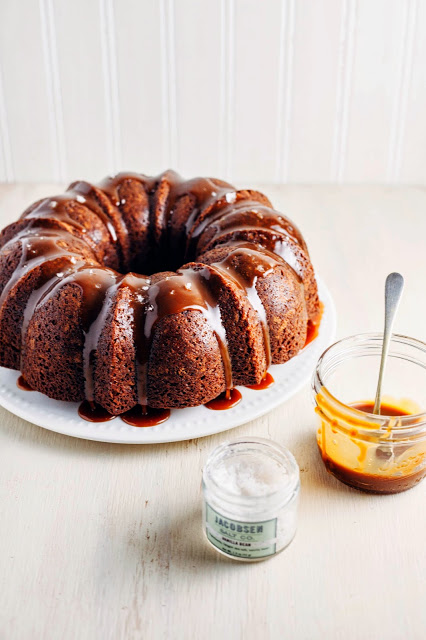 Banana cake has been a part of my life for as long as I can remember. In high school, I always loved the banana bread that my mom made. One of my favorite memories from back then is the times I would come back home from a long soccer or track practice and be delighted to find that she’d made banana bread earlier that day. I’d grab multiple slices before my mom could scold me for ruining my appetite for dinner and head upstairs to curl up in bed (still in my soccer outfit, mud and all) with a book from the Sisterhood of the Traveling Pants series to read and eat at my own leisure.

I’ve tried many banana bread recipes, as well as other variations like these chocolate frosted banana cupcakes or this banana chocolate Pocky cake. However, this banana bundt cake, the latest iteration, has been my favorite variation: 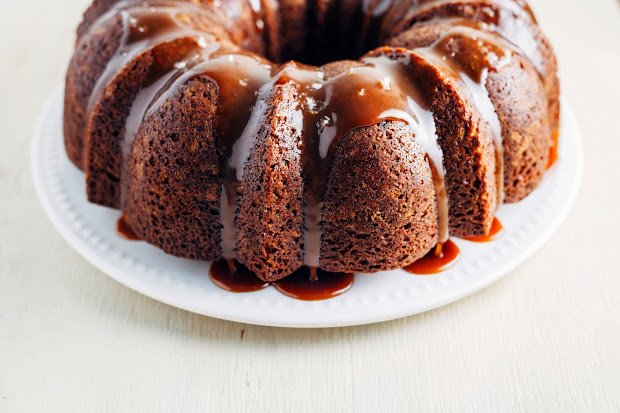 I’ve found the other banana cake recipes I’ve tried to produce a cake that’s, well, too much like cake. I know that sounds silly, but I really wanted to preserve the dense, heavy, moist texture that I adored so much in banana bread. However, translating banana bread recipes to cake recipes often didn’t work — I ended up with cake rounds that were too flat and brick-like, unappealing in both texture and appearance.

This recipe, however, manages to knock the ball out of the park. Placing the batter in a bundt pan allowed the banana bread batter to rise and bake properly like a cake. A healthy portion of sour cream in the batter also helped the cake retain the density and moisture that I admired so much in banana bread. And when topped with homemade dulce de leche caramel and flaky Jacobsen vanilla sea salt? Absolutely perfect: 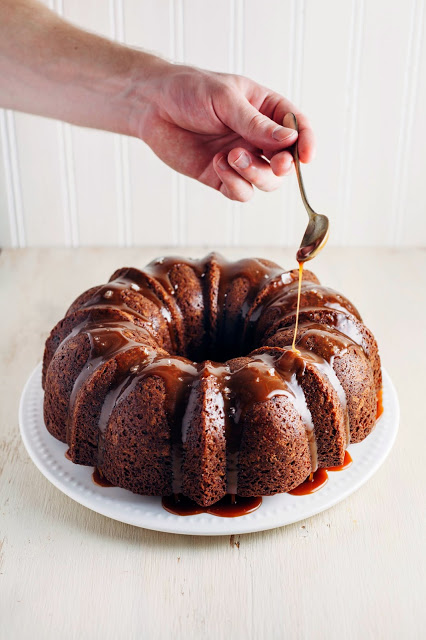 Despite the new additions of sour cream, dulce de leche, and sea salt, there’s still something very familiar about this banana bundt cake. I can’t quite describe it, but I know that it’s similar to the one that I had when rereading the Sisterhood of the Traveling Pants series. Eating it took me back to the past, to all those times I devoured it in packed lunch boxes and after soccer games. But eating it also reminded me of the present, with its new, trendy flavors. Again, I felt the merging of my past and present selves. And maybe that’s reading too much into a cake recipe, but there we have it. 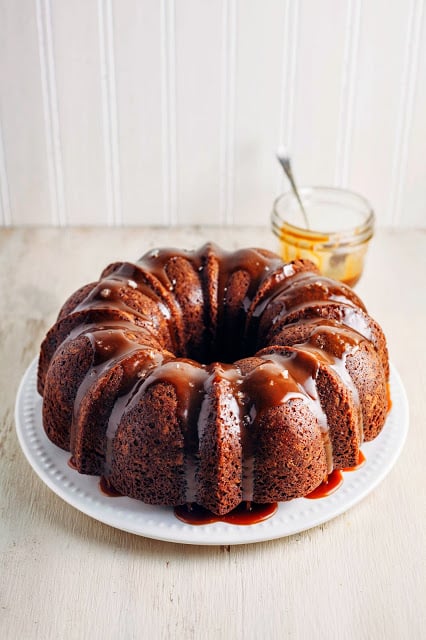 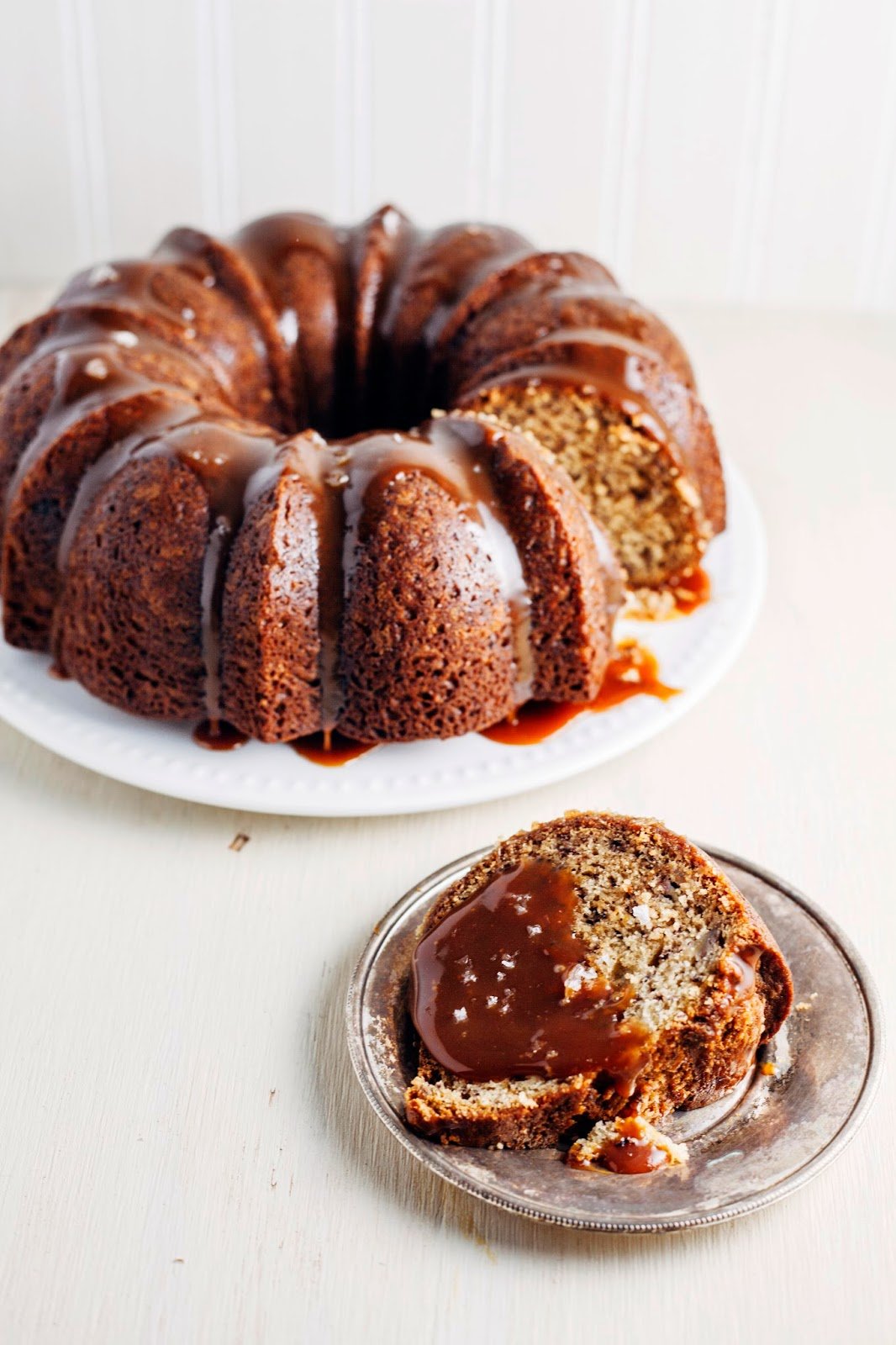 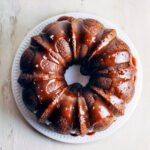 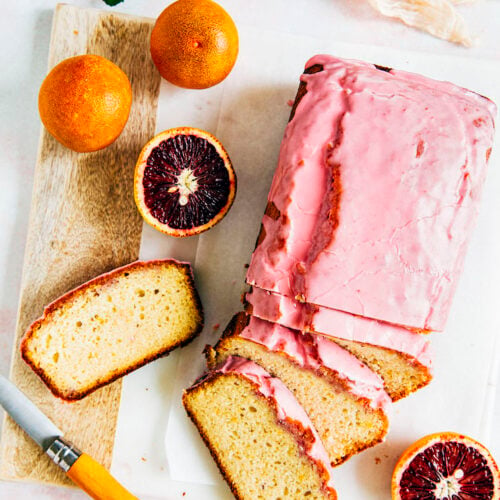 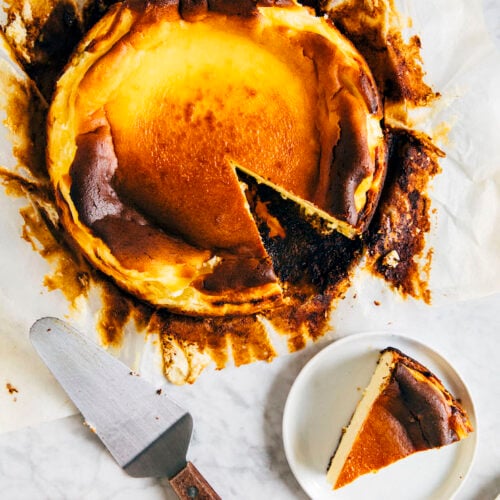