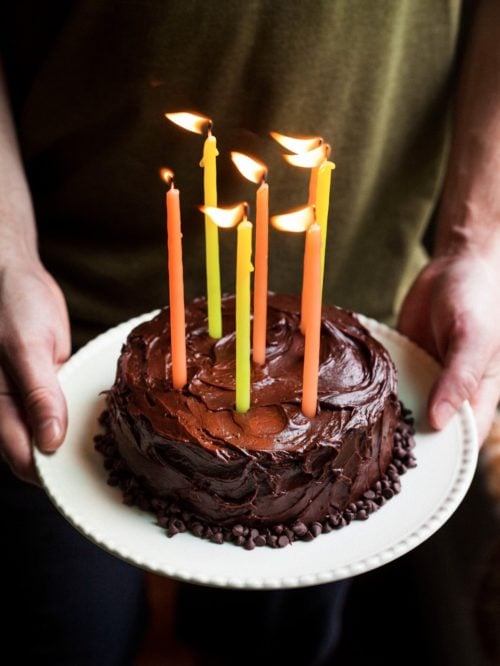 Time for my annual lookback, where I review your favorite recipes and my favorite recipes. Ready for it? Here goes: Readers’ Favorite Recipes of 2013: That is, these babies are my blog’s most viewed recipes in 2013. YOUR favorites. And it looks like you lot are big chocolate and cake lovers, because all three recipes […]

Readers’ Favorite Recipes of 2013:
That is, these babies are my blog’s most viewed recipes in 2013. YOUR favorites. And it looks like you lot are big chocolate and cake lovers, because all three recipes are for chocolate cake: 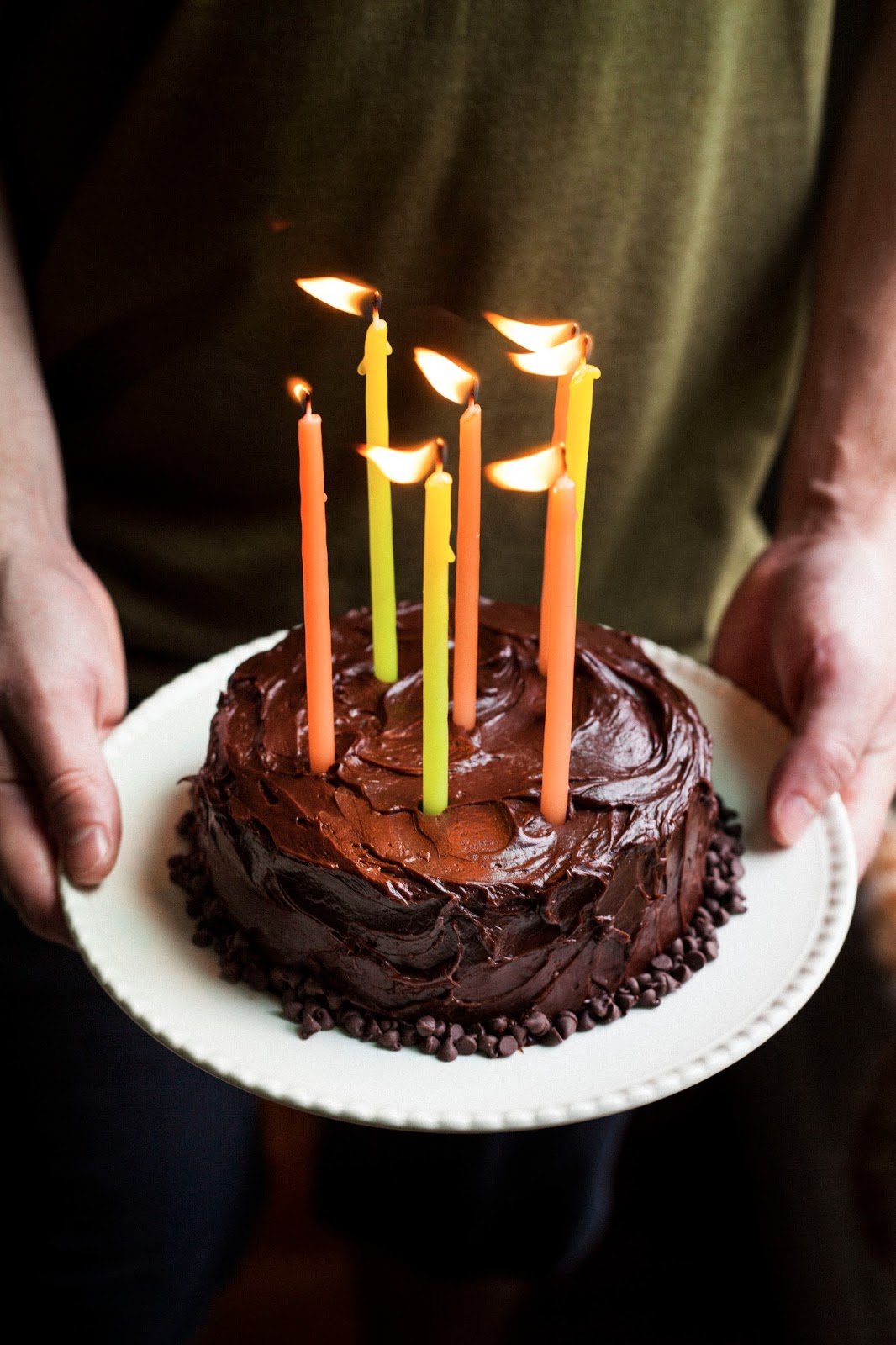 I am so glad that this recipe was one of y’all’s favorite recipes of the year — it’s one of my personal favorites too! This beautiful cake is adapted from Miette, a cookbook from one of San Francisco’s most popular bakeries. A golden yellow butter cake topped off with a rich, dark chocolate ganache frosting, Erlend and I finished this cake off between the two of us in just one day. It’s THAT good. Special thanks to Emily from Cupcakes & Cashmere for giving this cake some link love too! 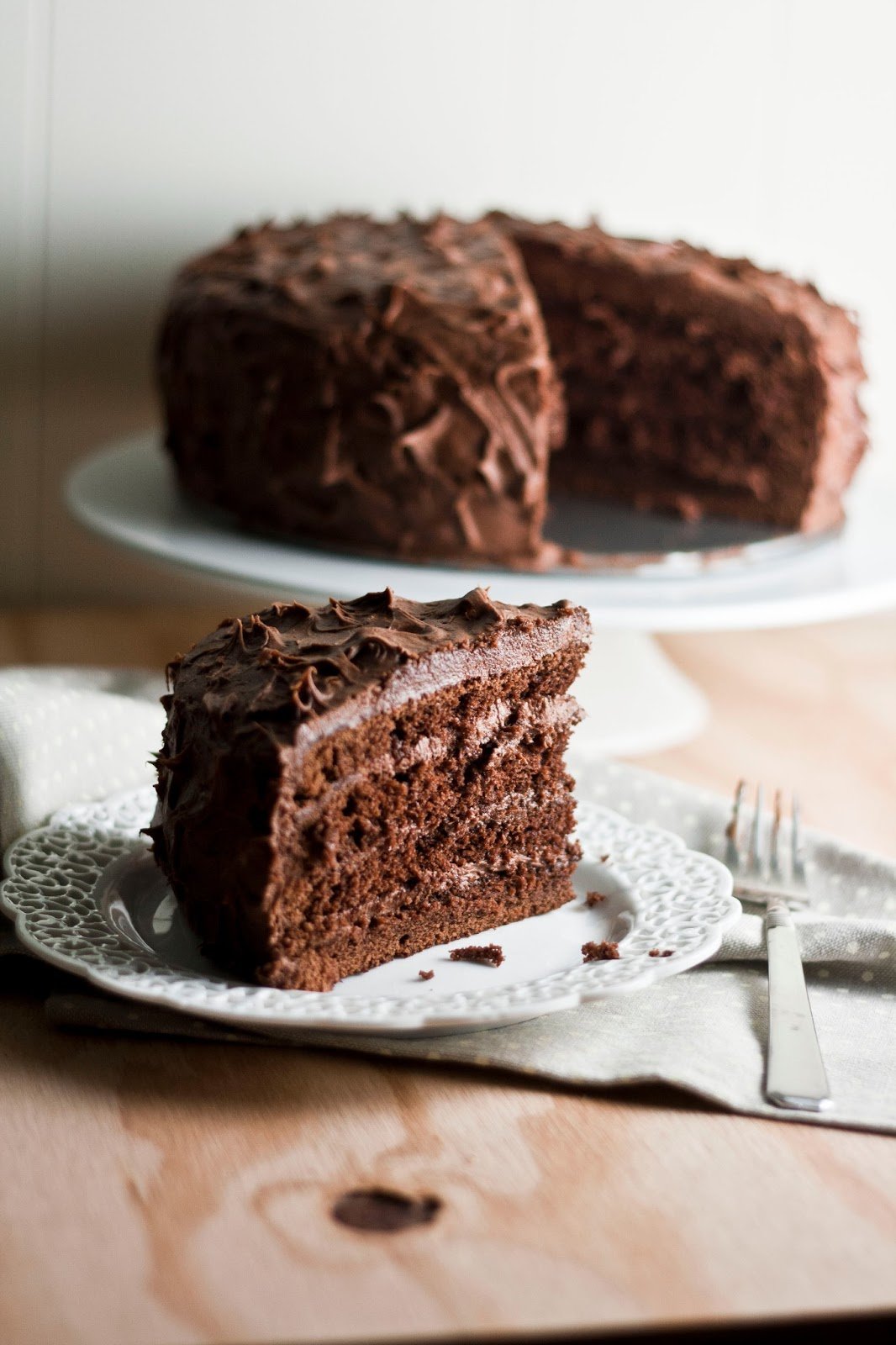 I’m also glad that this recipe made the list; it’s another one of my personal favorites. With a recipe adapted from Philadelphia’s famed Brown Betty Bakery, I’ve never had chocolate buttercream frosting that’s tasted this good. The secret is just a touch of cream cheese blended in. I highly recommend The Brown Betty Cookbook to anybody looking for a collection of some delicious, classic cakes. 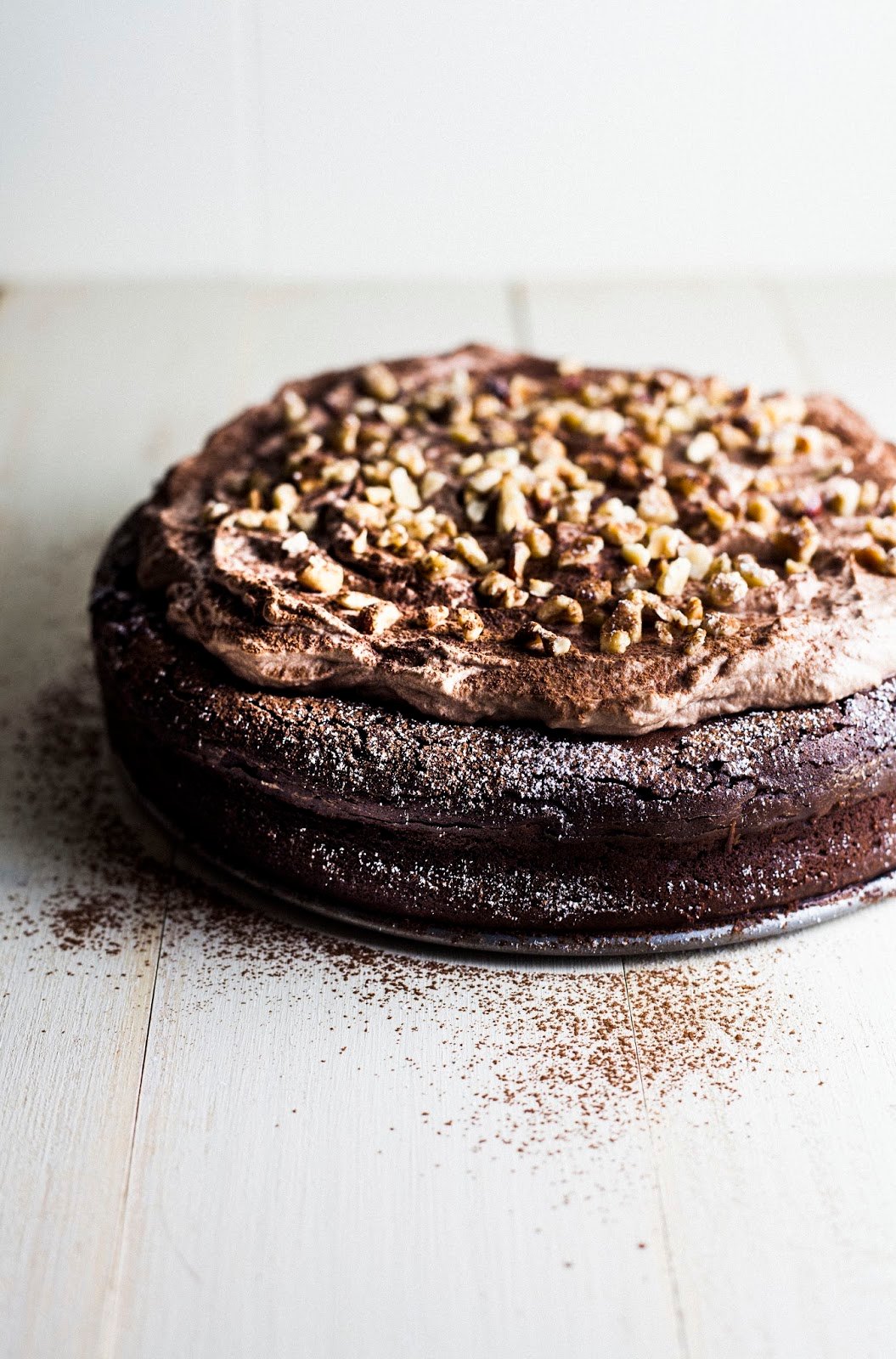 Although I came up with this recipe during a partnership with Frangelico, I really made it for my friend who was recently diagnosed with celiac disease. She couldn’t believe that this cake was flourless — dense and chocolatey, it tasted exactly like a brownie. And when topped with some chocolate hazelnut whipped cream? Nobody could resist it.

My Favorite Recipes of 2013:
It was really, really hard to narrow it down to just three recipes that I liked the most. It was a great year for baking over at this blog, and I made a lot of recipes that I really liked and am keeping in my repertoire forever. In the end, I managed to narrow a long list down to four recipes: 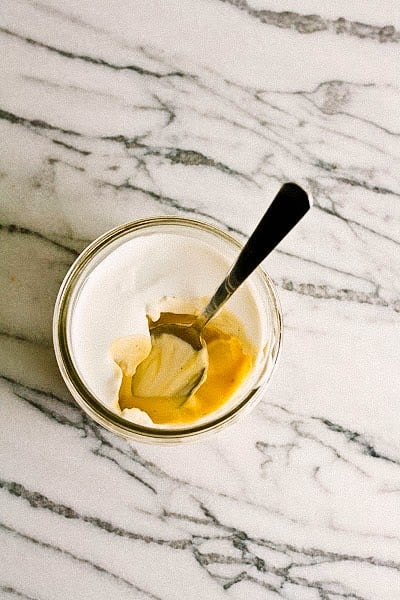 I feel like butterscotch is making a comeback. In the past year, I’ve started seeing butterscotch flavored custards and pots de creme in the dessert menus of hip restaurants around town. Almost all are served with a brown sugar cookie and a healthy dollop of whipped cream, and a good majority are infused with bourbon. I still think that this recipe from famed pastry chef and cookbook author Zoe Francois does it best though — unapologetically butterscotch all the way, Zoe recommends topping the pot de creme with creme fraiche or sour cream to help temper the sweetness. The result is a well balanced, creamy custard that beats all the others. 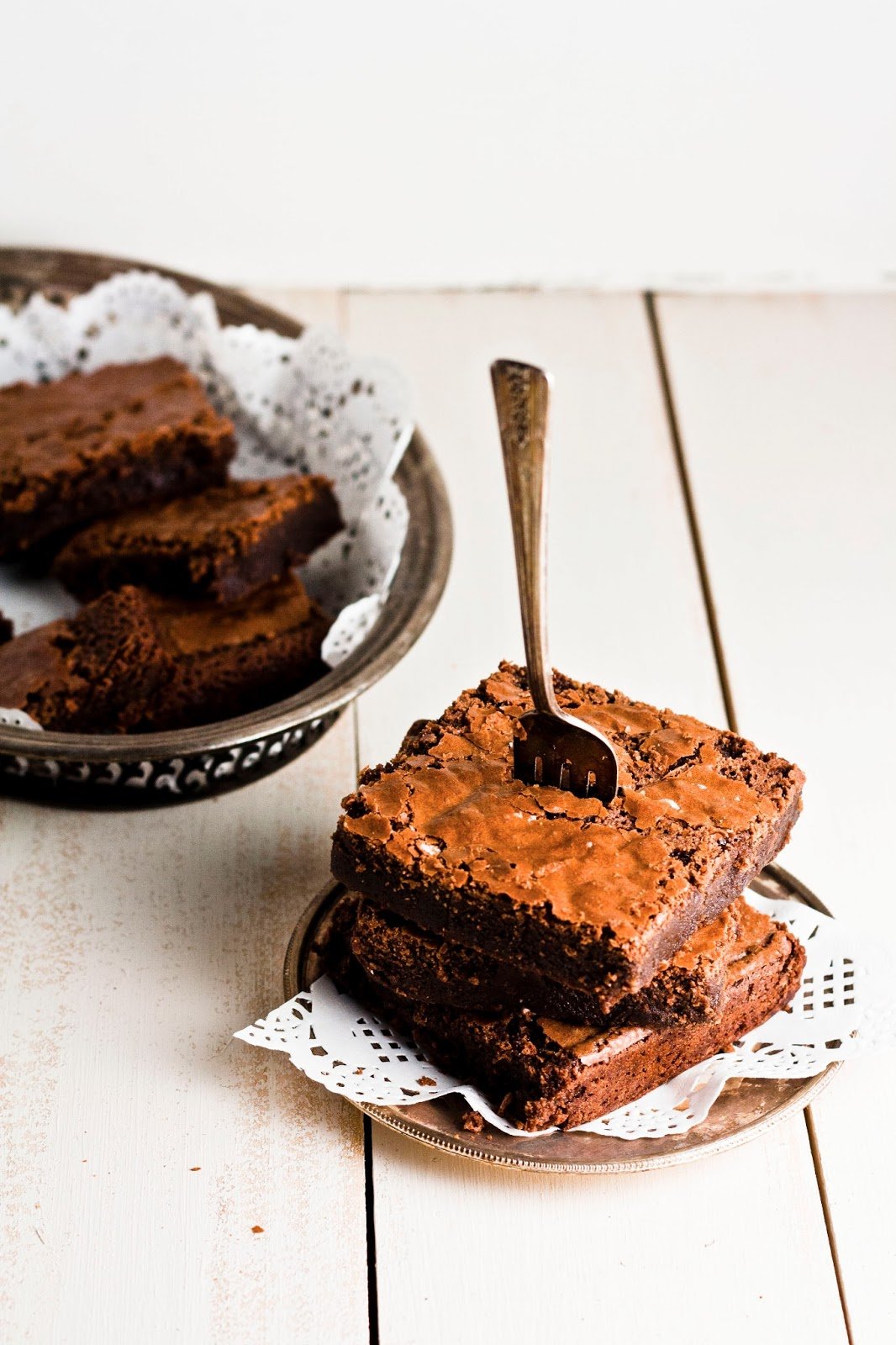 These brownies! Oh good lord, these brownies. With so many brownie recipes floating around on the internet, it can be hard to distinguish one from another. But believe me when I say that there is nothing that can compare to this particular brownie recipe. Originally from Nick Malgieri’s Chocolate cookbook, Saveur Magazine republished the recipe in 2011 and it’s been making the rounds in the blogosphere since. What makes these brownies “supernatural” is the addition of dark brown sugar, which then caramelizes and adds an almost toffee-like flavor to the brownies. Seriously — you gotta give this recipe a try. 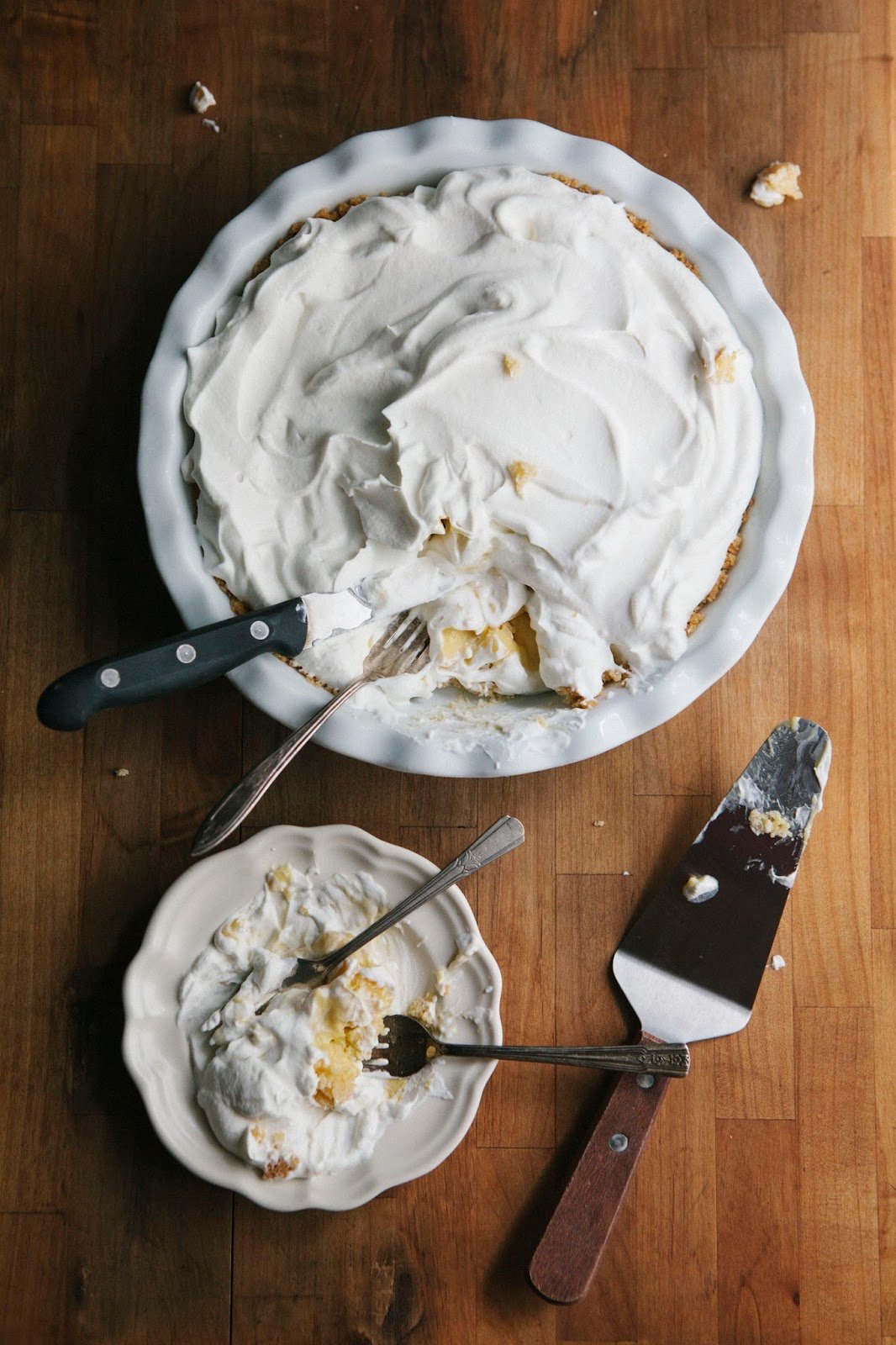 This is a recipe on my blog that didn’t get enough love. I think people are intimidated by passionfruit and think that it’s too exotic and hard to find. Really guys, it tastes almost exactly like mango! Don’t be intimidated, there’s nothing to be scared of over here. And yes, I know that passionfruit puree is a pain to find, but this pie makes it all worth it. This pie is a dream, with its layers of whipped cream, passionfruit curd and shortbread crumbs. My mouth is watering just thinking about it. 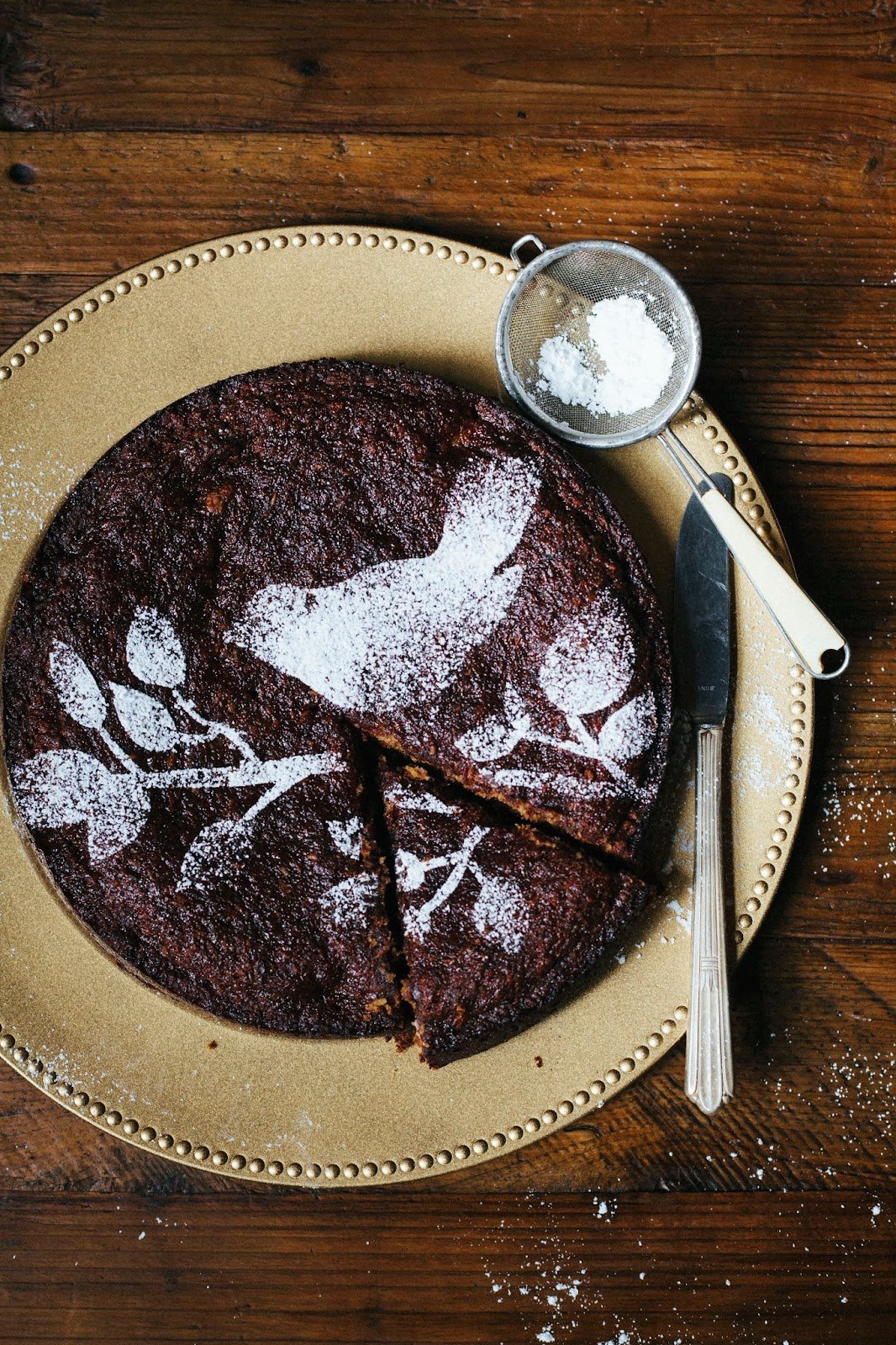 When this cake first came out of the oven, I was worried. There were several weird steps involved, and it looked like a monochromatic, brown mass. I improvised on the spot and bought a bird stencil to make a powdered sugar design to make the cake more appealing, which worked. However, after taking a bite of the cake, I realized I had underestimated this baby. Filled with a complex, caramelized toffee flavor from the dates and coconut, this cake was an exact replica of the Lumberjack Cake from San Francisco’s beloved Frances restaurant. It’s absolutely delicious.

My Favorite ORIGINAL Recipes of 2013:
Although I still relied on cookbooks and recipes from other sources this past year, I became more and more confident in developing my own recipes. It wasn’t an easy process — some recipes ended in disaster, and others I had to make again and again just to get right. These three recipes are my favorite original recipes: 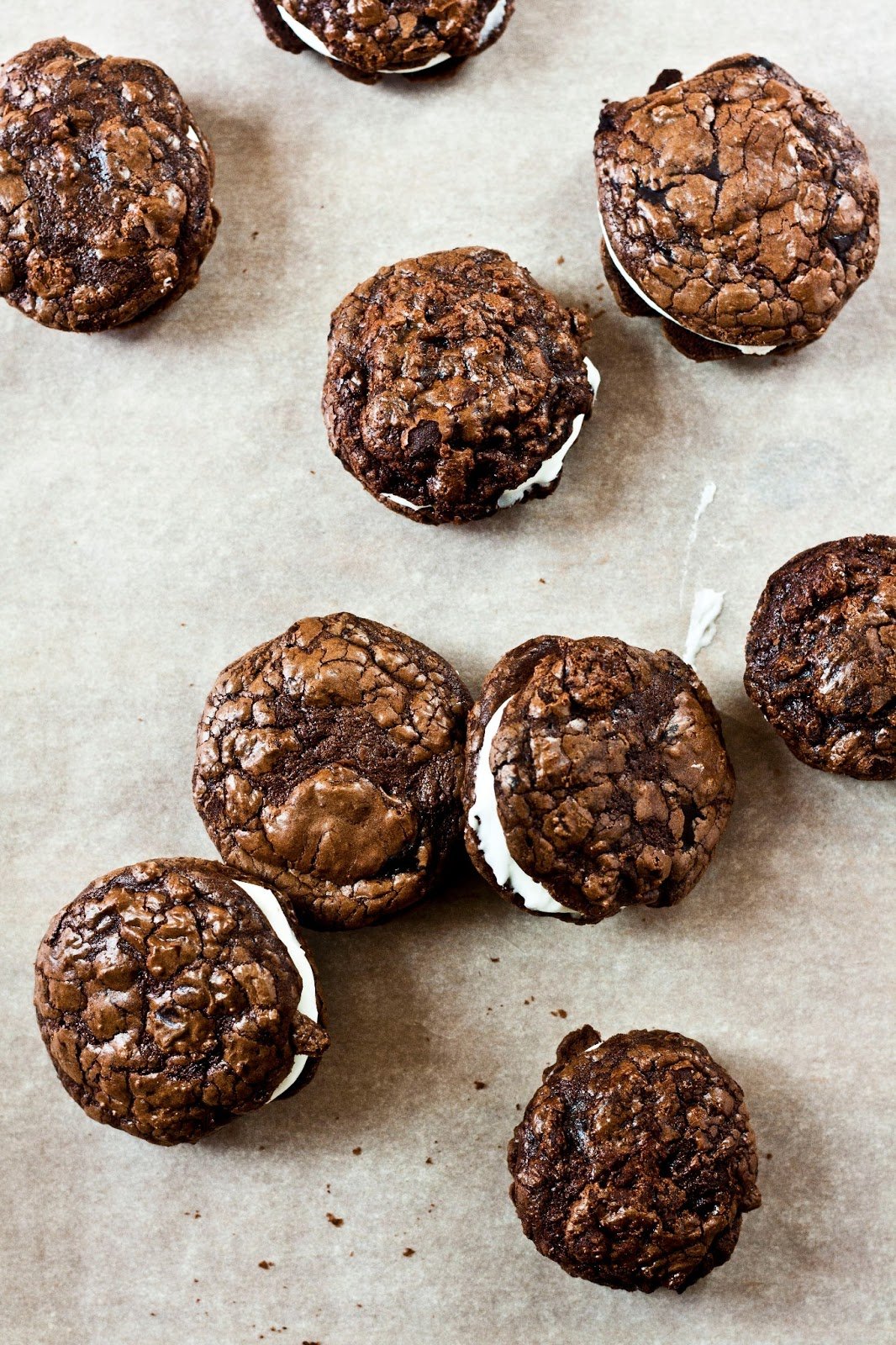 When setting out to create this recipe, I knew that I wanted to make a brownie base that was more scoopable than others to create cookie shapes. I added an extra egg to increase the brownie batter’s structure. I also reduced the amount of sugar in the brownie recipe I based this off of, because I knew that the cream filling would more than compensate for the reduction. The result is a well balanced brownie sandwich cookie that I’m incredibly proud of. However, I wasn’t quite sure the cream, which I’d made from sweetened condensed milk, was the right fit for the filling. I plan on reworking this recipe next year with a peanut butter or dulce de leche filling — keep an eye out for it! 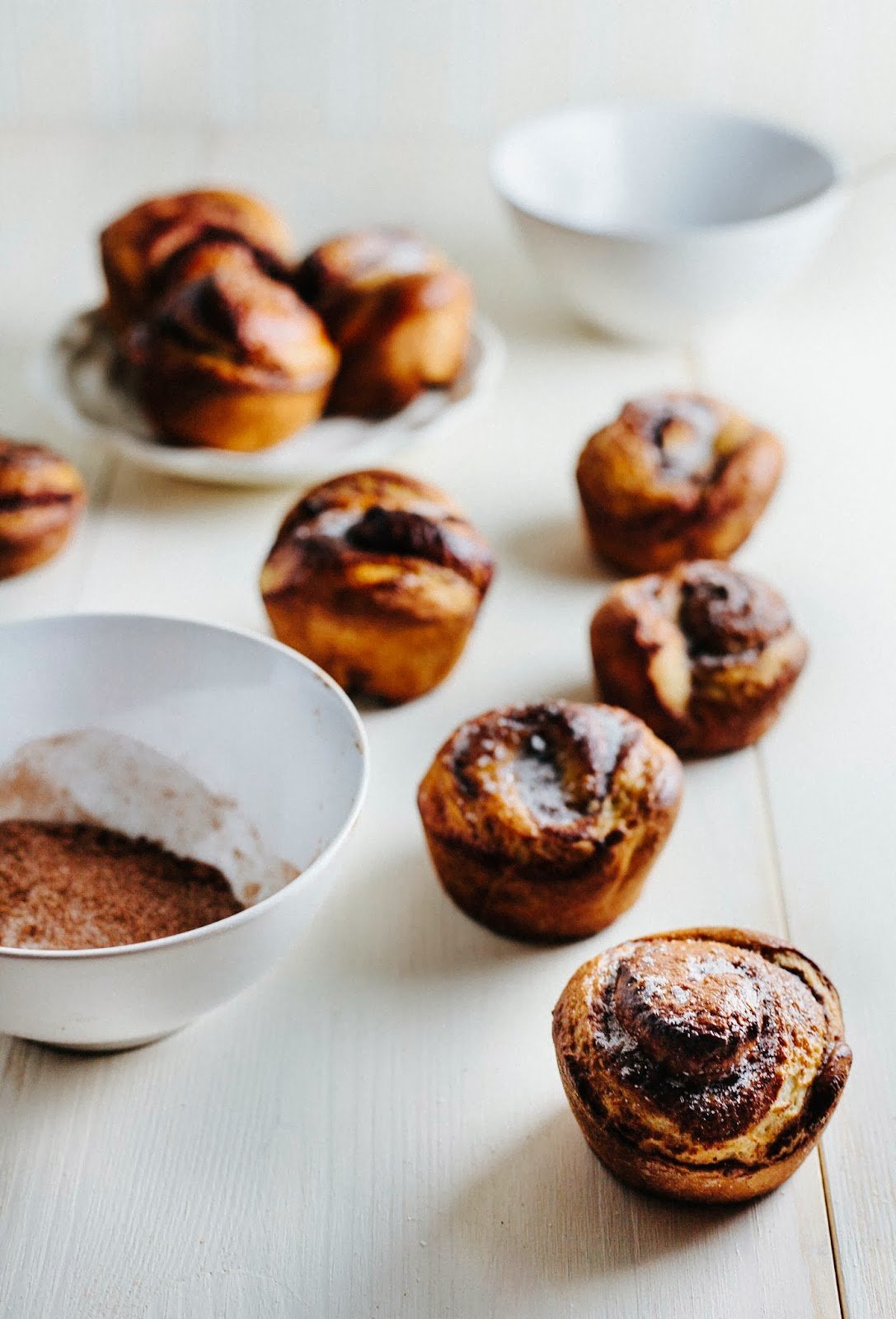 I made these Mexican Chocolate Rolls in collaboration with Fleischmann’s Yeast and Share Our Strength’s No Kid Hungry, a charity that I really admire and support. But when they first approached me and asked me to do a twist on their recipe for Beginner’s White Bread, I was nervous. I’ve never been much of a bread baker and I wasn’t sure if I could come up with a satisfactory recipe/post to help them with their campaign. However, reading a couple bread books (notably Flour Water Salt Yeast and The New Artisan Bread in 5 Minutes a Day) pointed me in the right direction and gave me the techniques for these beautiful babies. 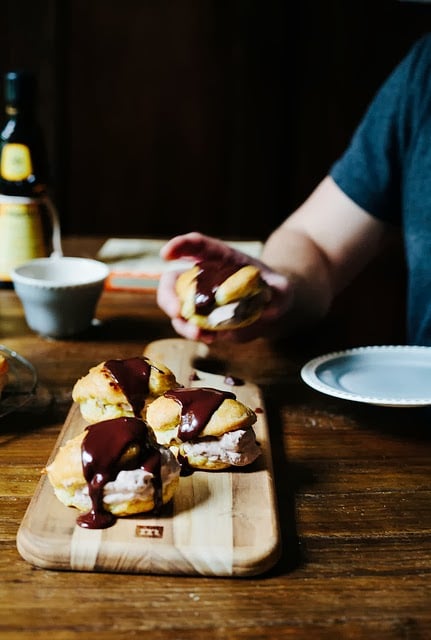 Oh my god, these cream puffs. I swear to god, these guys just melted in your mouth. My roommates and I each consumed about 4 or 5 in the span of half an hour, with no regrets. The road to the cream puff was not without obstacles, however — my first iteration, the White Chocolate Cream Puffs that you see in my 12 Days of Christmas Desserts ebook, were good but had a thin ganache that lacked points for presentation. This version with chocolate hazelnut cream and chocolate hazelnut ganache is perfection though. Really. 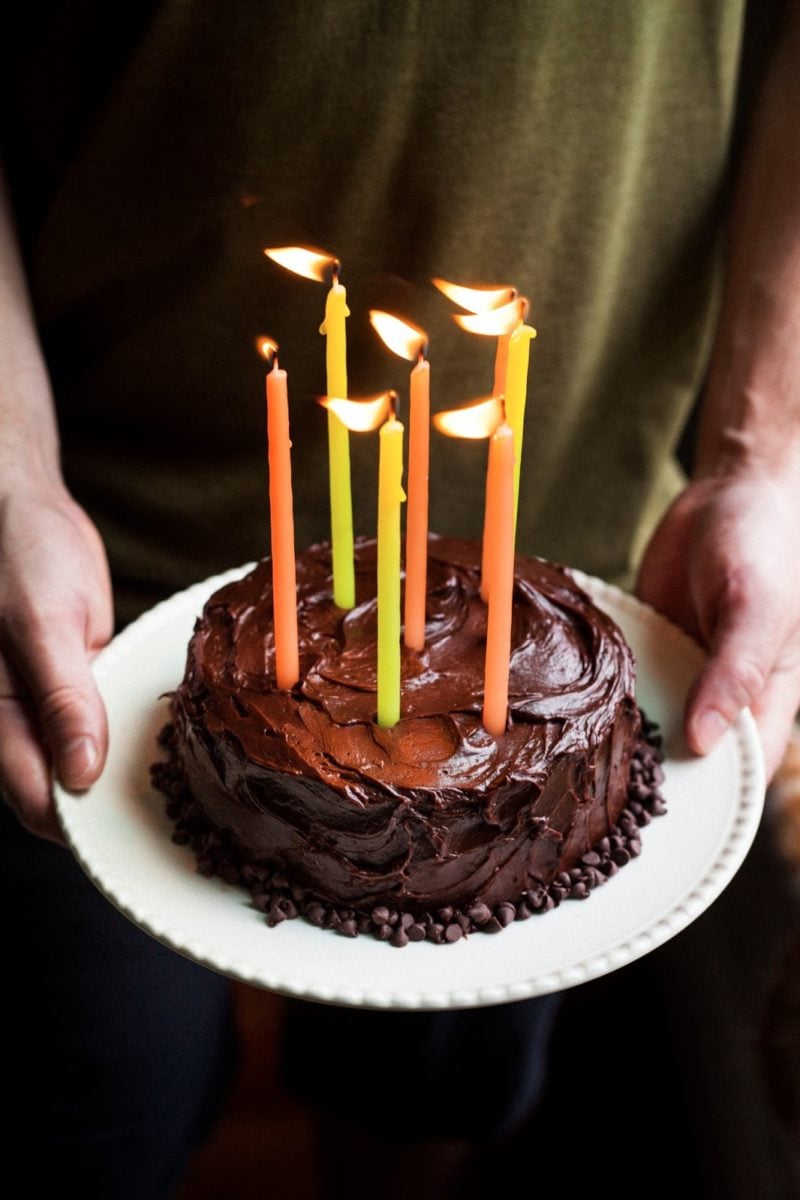 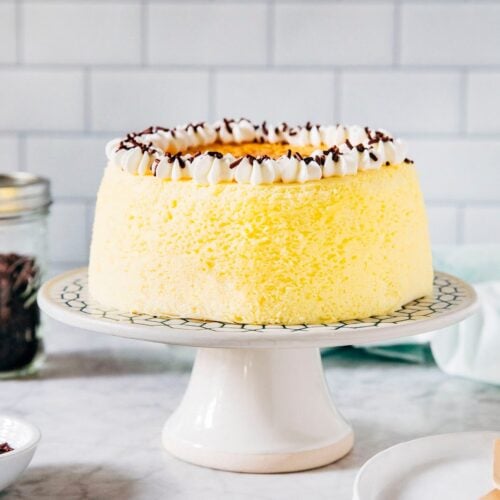 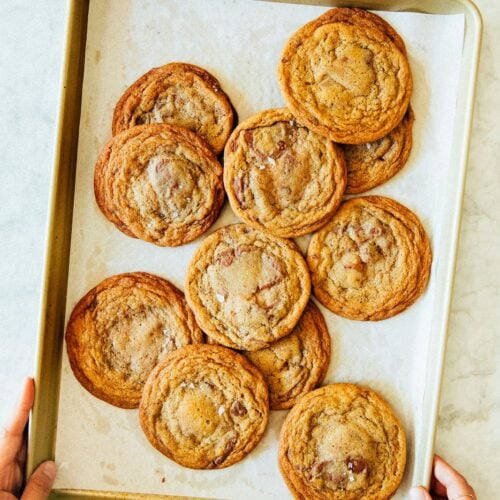 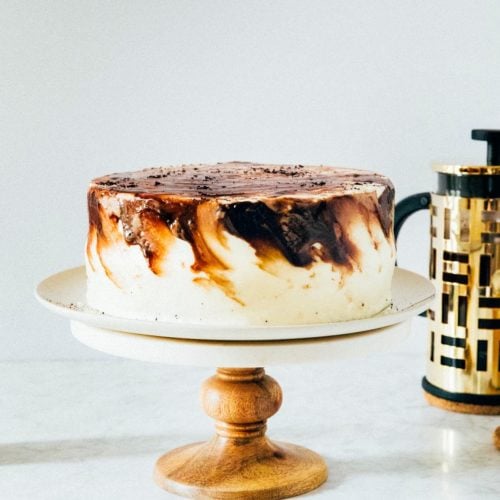