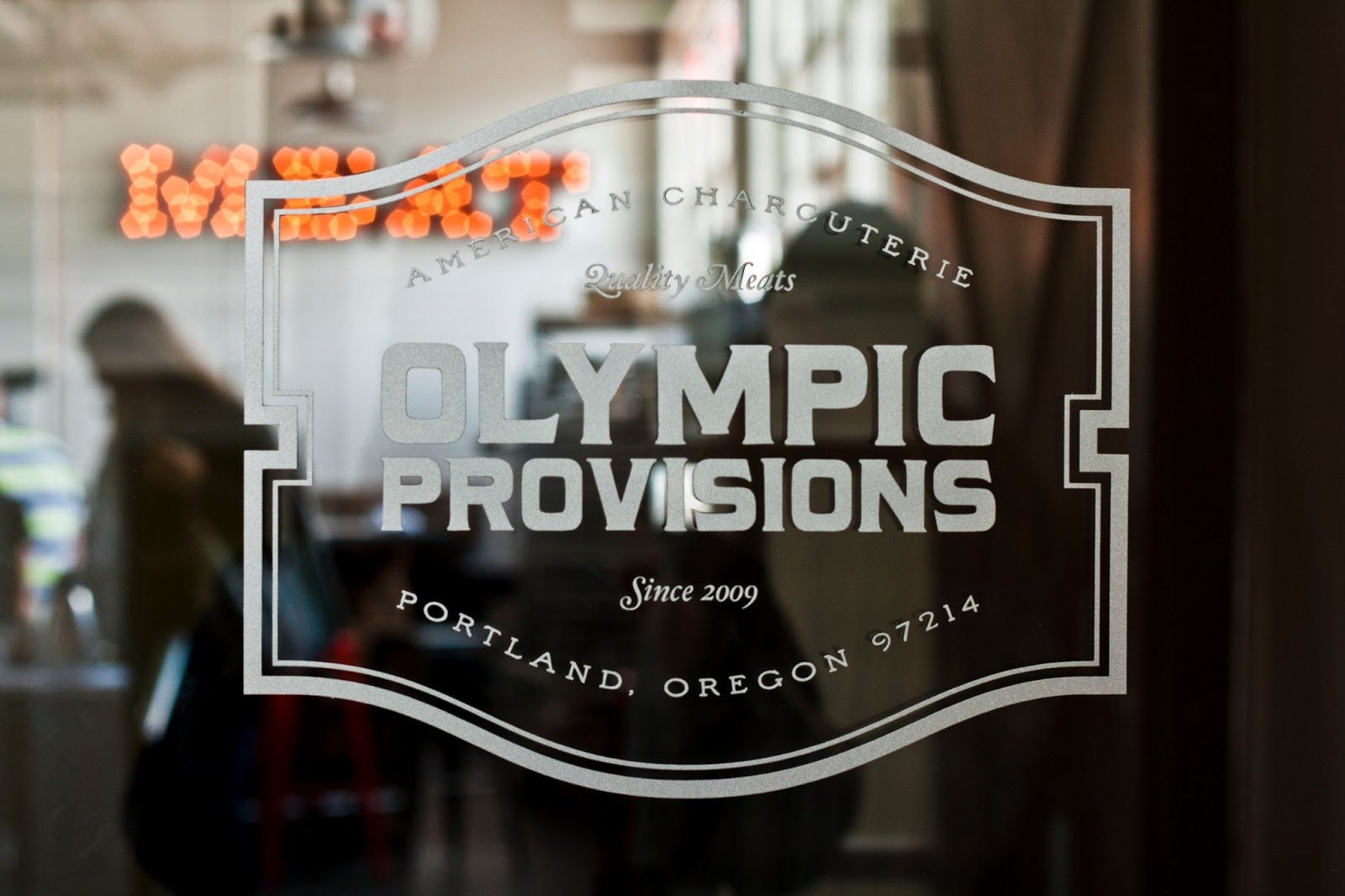 Last weekend, my friend and I went to Olympic Provisions for brunch. Olympic Provisions is a highly-lauded charcuterie and restaurant that cures their own meats right here in Portland. Oregon. They’ve got two restaurants in the city (one on the east side and on the west). Prior to this brunch, I’d only been to the […]

Last weekend, my friend and I went to Olympic Provisions for brunch. Olympic Provisions is a highly-lauded charcuterie and restaurant that cures their own meats right here in Portland. Oregon. They’ve got two restaurants in the city (one on the east side and on the west). Prior to this brunch, I’d only been to the westside Olympic Provisions once before on a lunch with my coworkers, where we’d spotted famed chef Tyler Florence grabbing lunch. But truth be told, I was less interested in the celebrity chef sighting and more interested in the hot dog I was eating. I was also busy side-eyeing my coworkers’ charcuterie plate, which had looked so incredibly tasty that I still regretted not getting my own several weeks later. So let me tell you — I was extremely excited to finally make it to the east side Olympic Provisions to finally get that damn charcuterie plate for myself.

When we walked in, we were greeted by their famous, light-up “MEAT” sign: 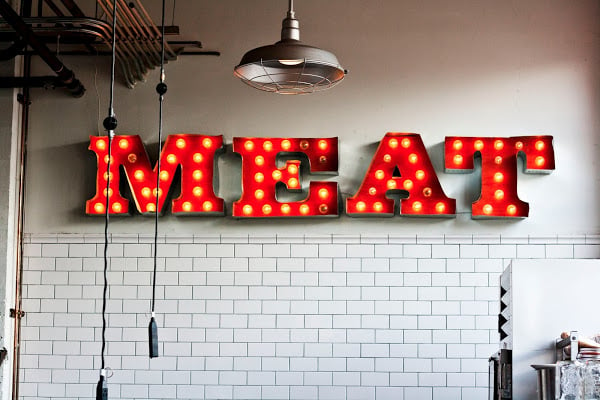 In addition to the charcuterie plate, my friend and I decided to an asparagus and egg sandwich. I know a vegetarian sandwich seems like an odd choice to get at a restaurant famous for its, you know, MEAT, but we figured it might be nice to throw some vegetables in our meal. Though I’m not sure it counted, because it was slathered in garlic cream sauce, sitting up top a butter-slathered loaf of ciabatta bread: 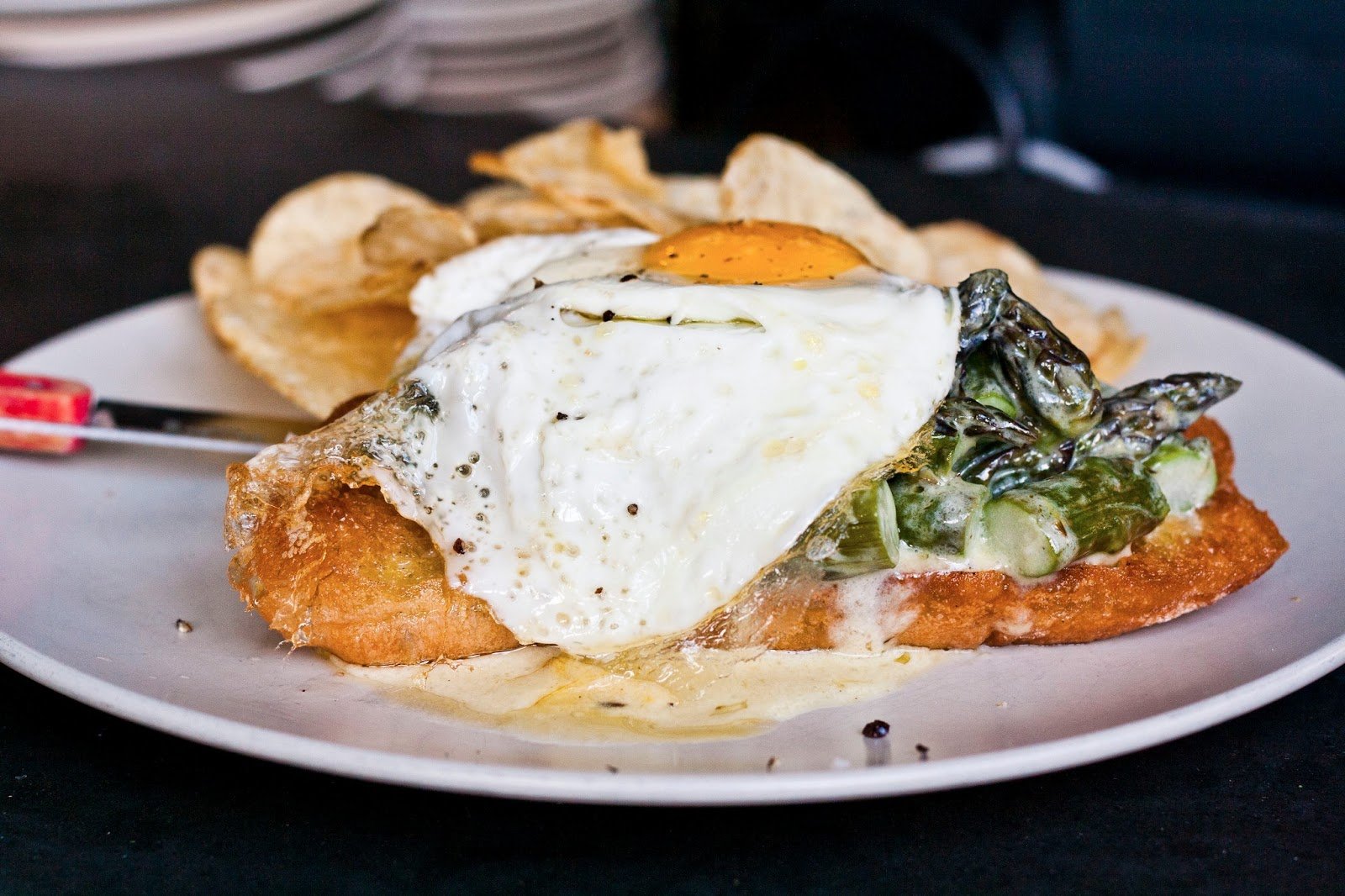 And it was absolutely delicious.

As for our charcuterie plate, we decided to go with the Spanish board, which was filled with ham, chorizo, two different types of Spanish salami, toasted almonds, roasted pepper salad, and some sort of cheese: 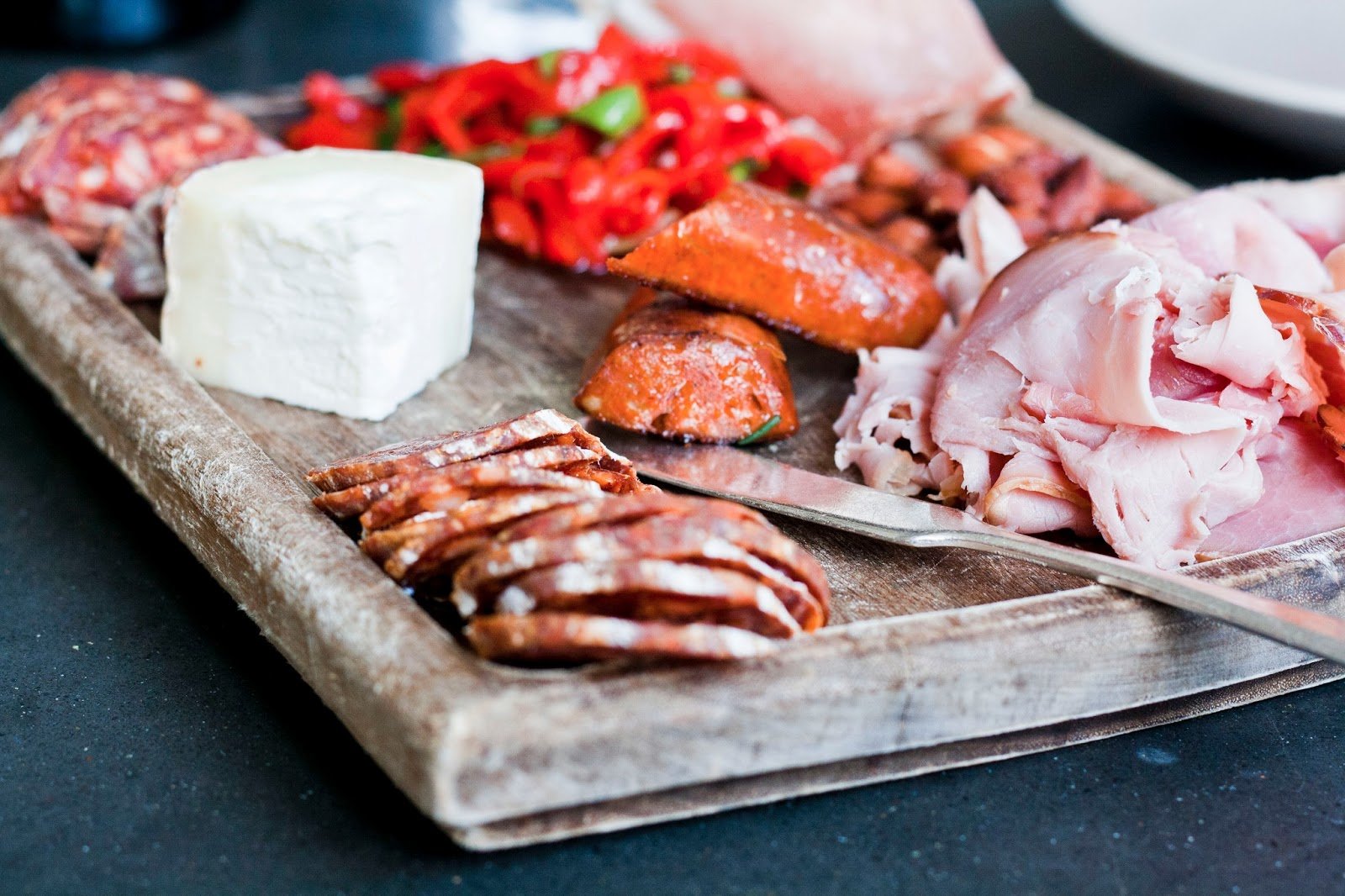 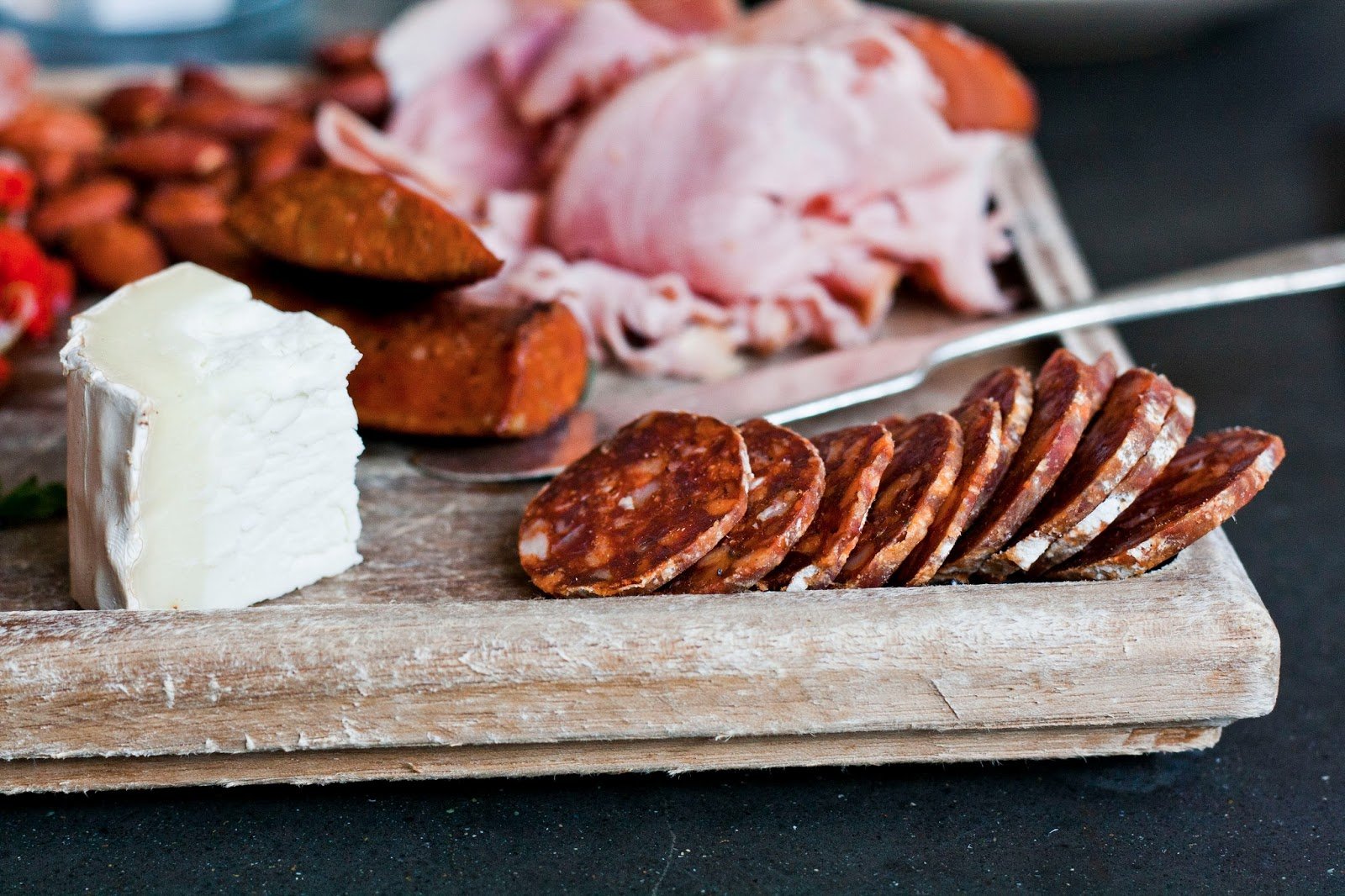 According to Lucky Peach magazine (the slightly pretentious food quarterly journal spearheaded by momofuku’s David Chang and former New York Times food columnist Peter Meehan), Olympic Provisions is one of the vendors making truly “American” salami. Historically, the process of making salami (that is, curing meat wrapped in sausage casing) has been a European venture, with products shipped abroad to the US. So why does this matter and what makes Olympic Provisions’ salami more “American”?

Salami production relies on specific bacteria to acidify and ferment the meat —it’s this process that gives salami its unique, salty taste. Because different cities and countries have varying climates, different sorts of flora and fauna specific to the region will grow on the salami, lending the salami a distinct flavor that can only be achieved when cured in that specific region. It literally takes the phrase “regional flavor” to a whole other level. And indeed, according to Lucky Peach, Olympic Provisions’ “Sancission D’Arles” salami has as many as five different bacterial species unique to the Pacific Northwest region. The diversity of the microbes is what gives Olympic Provisions salami its unique, salty and delicious flavor, one that can only be achieved in Portland, Oregon.

To balance out all that salty meat, the charcuterie plate also came with an awesome baguette (Seriously, does anybody know who supplies Olympic Provisions with their bread? Or is it in-house? Eitherway, I love it) with a side of some sort of spiced, apricot jam. 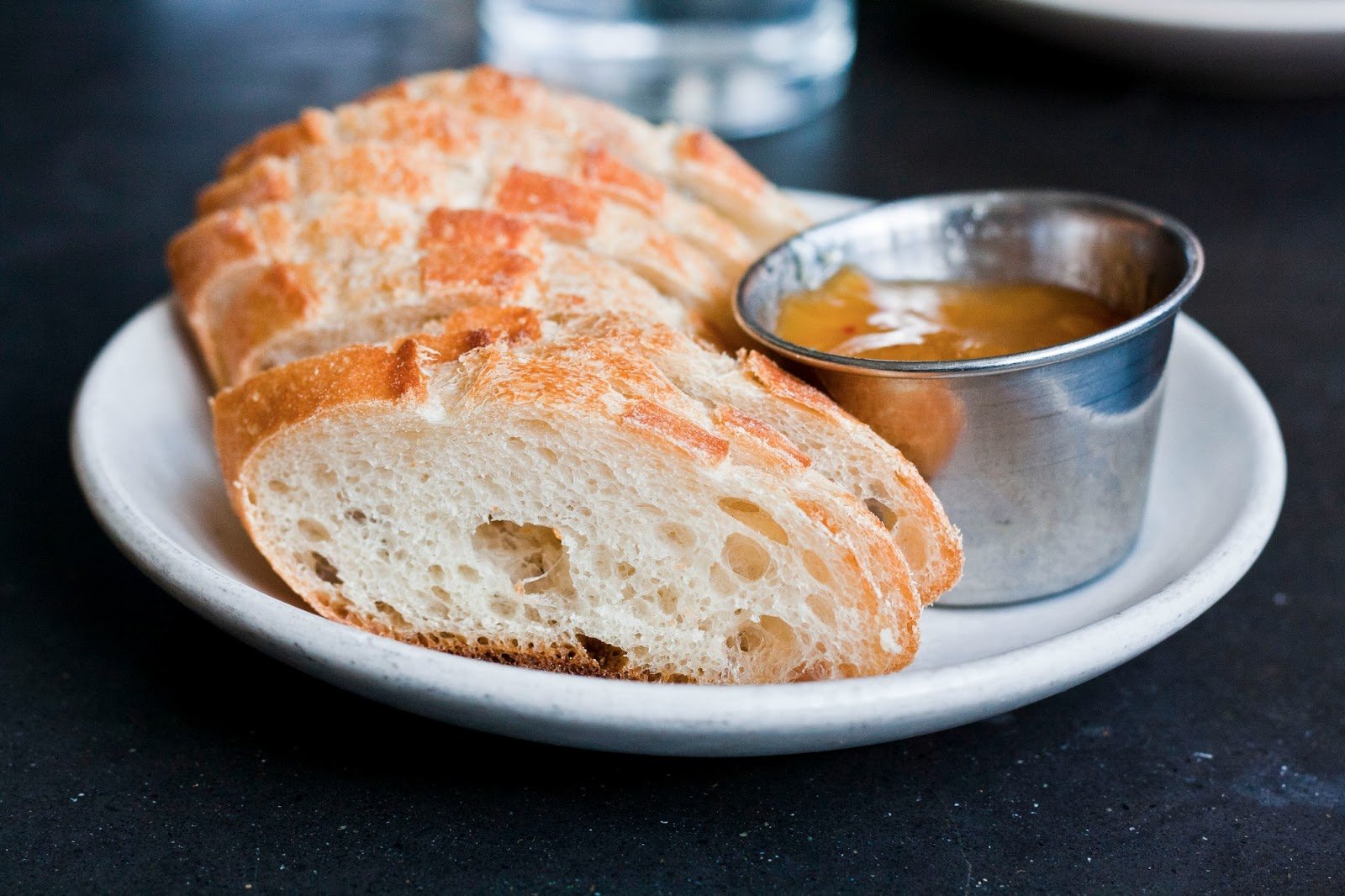 And this is the part where my friend and I got really disgusting. Because we’d run out of bread (despite having asked for ANOTHER platter of bread), we started to dip the potato chips that came with our asparagus sandwich into the jam. It was that good. If there had been nobody around, I probably would have just unabashedly tipped that little ramekin into my mouth. Unapologetically.

So, the lesson learned here is this. Do you like salty, cured, meat? If so, Olympic Provisions is where you need to be. Right now.

And for posterity, here’s that beautiful sign of theirs: 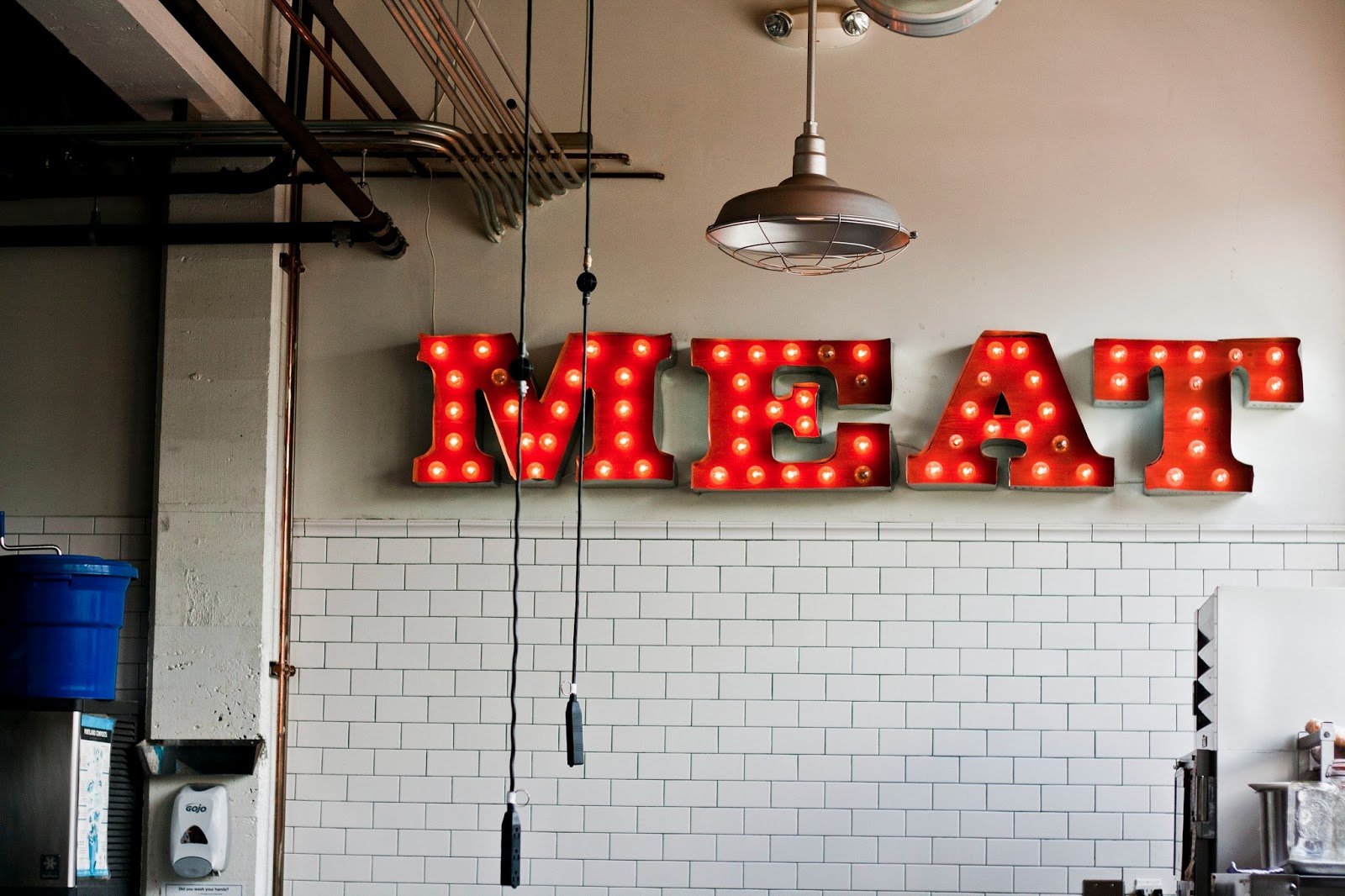