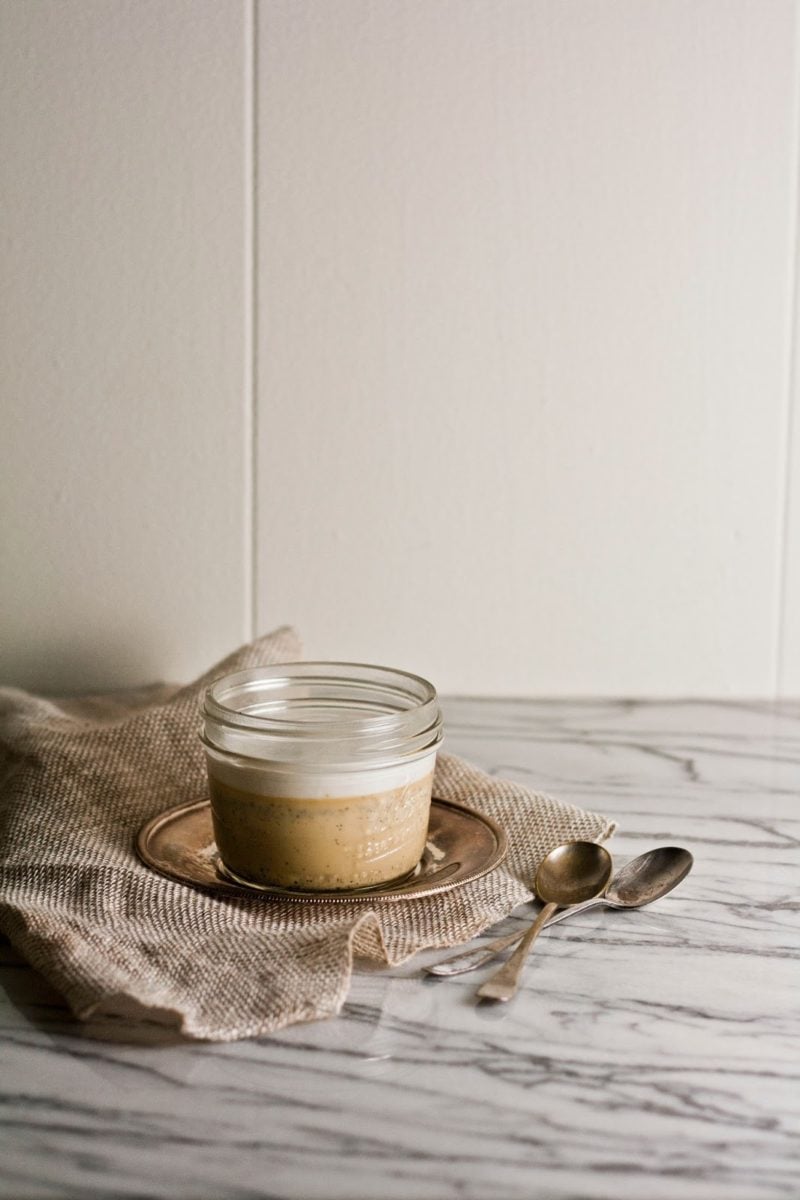 My senior year of college, my friends and I decided that we had had enough of Portland’s “drabbyness”. We’d come from larger and far more diverse cities like Seattle, San Francisco, and Houston, and we claimed to miss the “sophistication” of big city life. Oh, to be 21 and trying so hard to be grown-up! […] 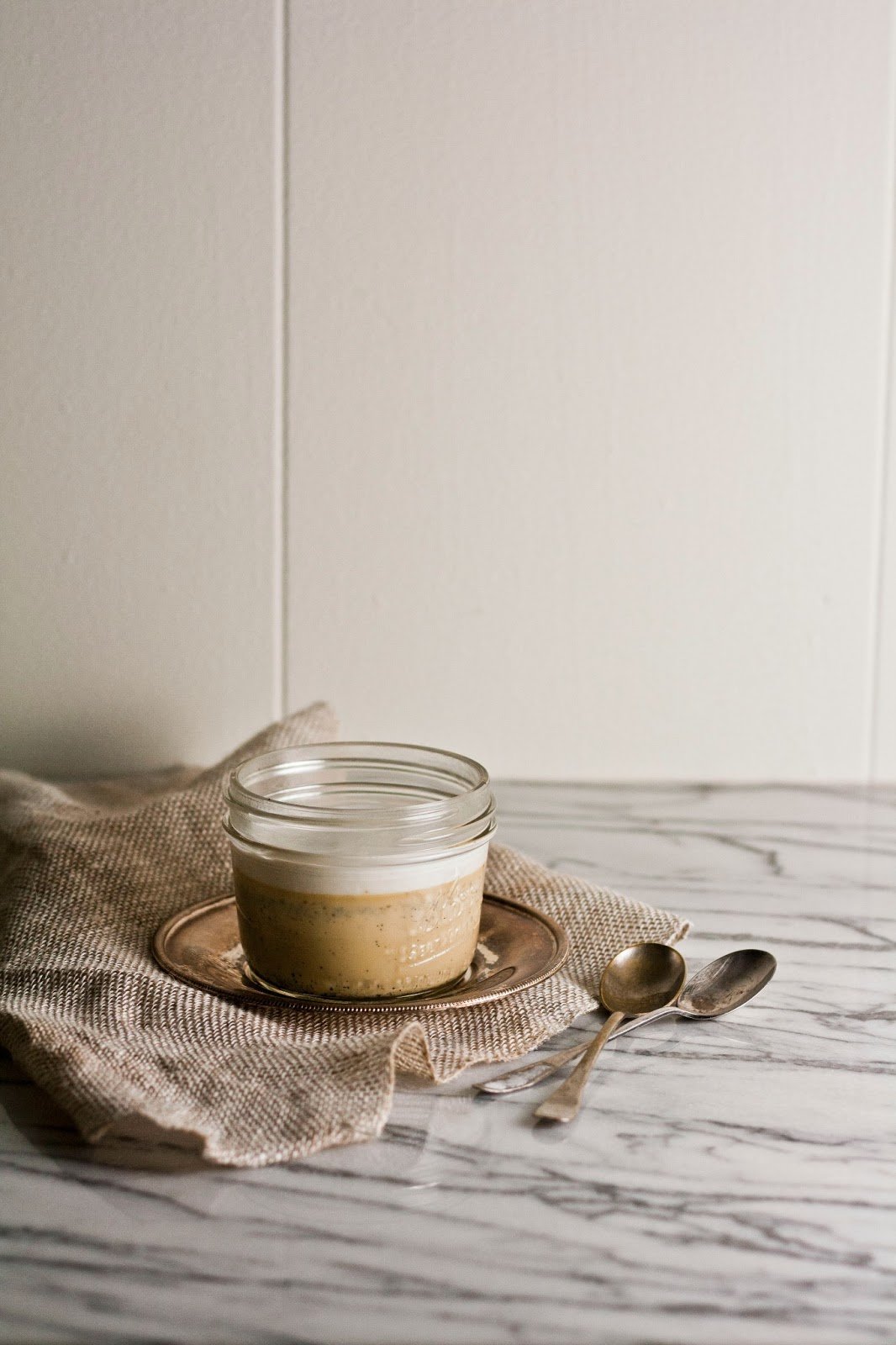 My senior year of college, my friends and I decided that we had had enough of Portland’s “drabbyness”. We’d come from larger and far more diverse cities like Seattle, San Francisco, and Houston, and we claimed to miss the “sophistication” of big city life. Oh, to be 21 and trying so hard to be grown-up! Those were the days.

In our defense, most of us hadn’t really explored the city’s dining scene. Back in the day, I remember how sleepy Portland seemed before I turned 21; as a minor, I was denied access to most of Portland’s nightlife. Not that Portland has much of a nightlife to begin with — it was just hard to find a restaurant that stayed open after 10PM. I’m not kidding when I say that the only option you had if you wanted to go out after that time was to go to a bar or Voodoo Doughnut. Mind you, this was before Portland’s food scene really blew up — for instance, Pok Pok hadn’t won national acclaim yet and you could sit on their outside picnic benches without table service.

In any case, my friends and I were finally 21 and ready to explore the bar and restaurant scene, determined to find that big city feel that we missed. And as total newbs, we did the first thing you do when you’re a newbie in Portland: you check out the Pearl District.

For those of you unfamiliar with Portland, let me describe the Pearl. You probably have one of these neighborhoods in your city. You know, the kind of neighborhood that’s celebrated by tourists and guidebooks, but in actuality, isn’t… well, how do I put this delicately… that great? The Pearl is one of those neighborhoods. It’s got a neat little back story, sure — the neighborhood was formerly occupied by empty and abandoned warehouses, but in the 90s went through significant urban renewal and transformed itself into a neighborhood filled with warehouse-to-loft art galleries and expensive high-rise condos. In Portland, if you wanted to be seen as a person of status, you bought a condo in the Pearl.

Truthfully, the Pearl really didn’t have much going for it back in the day. The food revolution was actually happening in the east side neighborhoods of Portland, places were Pok Pok, Podnah’s, Bunk Sandwiches, and Apizza Scholls were quietly redefining the food scene. In contrast, the Pearl was filled with chain restaurants owned by corporate restaurant groups, often overpriced and filled with what amounted to Portland’s bridge-and-tunnel crowd looking for a night out in the city. My friends and I tried many of these sorts of restaurants that have now come and gone — most were forgettable and closed without notice.

Except one — Bay 13. Bay 13 was a monstrosity of a restaurant located in the heart of the Pearl. In retrospect, it was everything I hate in a restaurant today — big and flashy with a grandiose concept, but with terrible, overpriced food and pretentious service. I wasn’t particularly sorry to see the soggy sushi and the overpriced cocktails go, but they did have one item on the menu that kept me and my friends going back. It wasn’t one of their sub-par entrees or mediocre drinks, nope. It was a dessert. Specifically, a butterscotch pot de crème with crème fraiche: 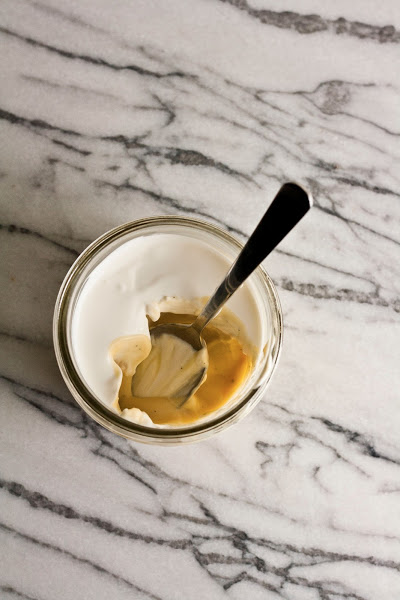 In my honest opinion, this was the best dessert in town back in the day. One that I’ve literally been dreaming about since the restaurant closed in 2010. One that I’ve recreated for you folks today.

When the waitress first described this dessert to me and my friends, I initially objected. I tend to stay away from butterscotch flavored desserts as I find that they tend to err on the side of being too sickly sweet. “Trust me,” she said. “You won’t want to miss this.” She then assured me that it wouldn’t be too sweet, as the butterscotch was layered with unsweetened and tart crème fraiche that balanced out its sweetness. 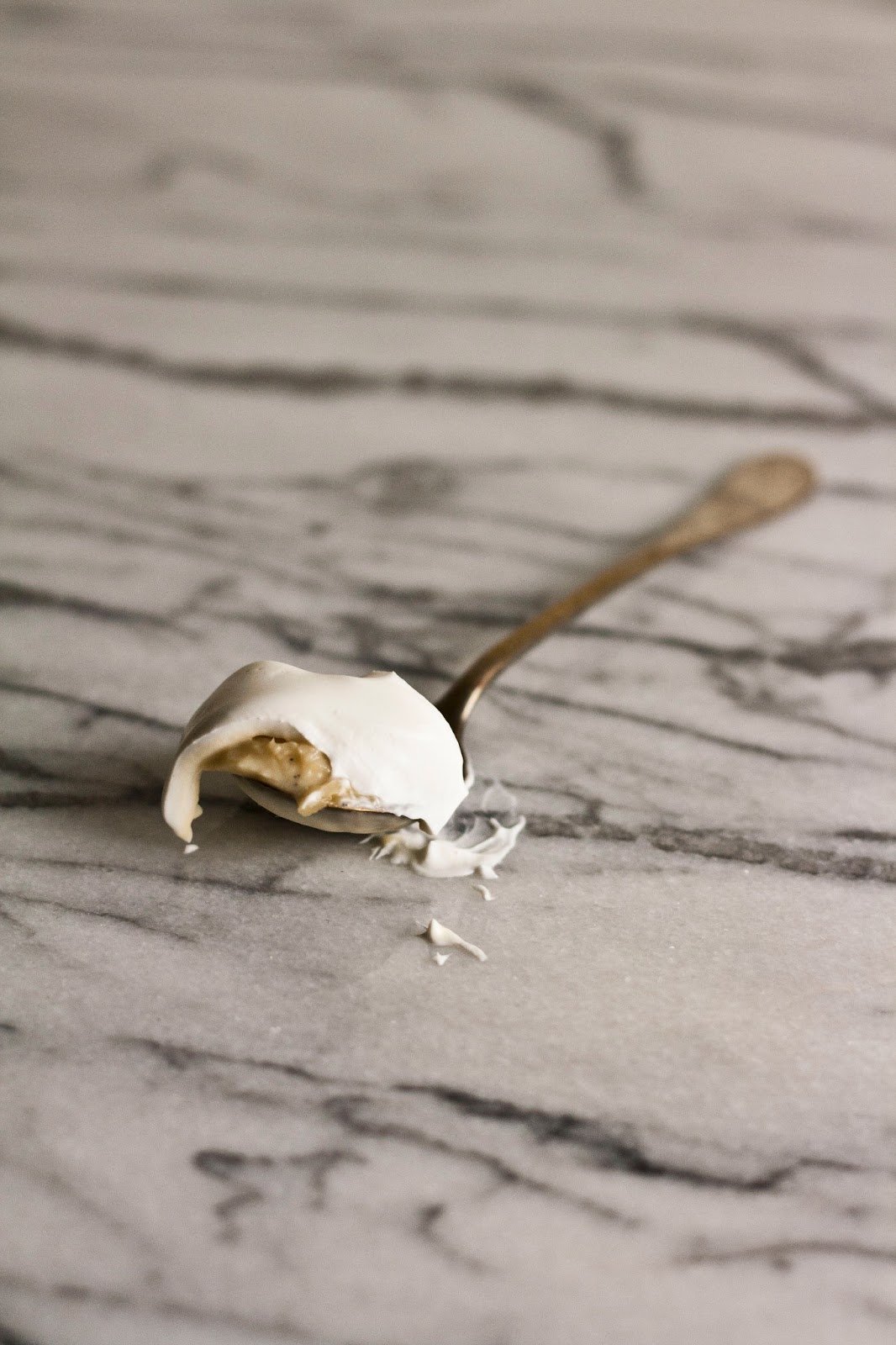 She was right. My first spoonful, I was a convert. I’d never had butterscotch like this. The pudding was creamy and smooth like creme brûlée without the crackled sugar top. Its sweetness was balanced out perfectly by the tart crème fraiche. Not to mention there was something so inherently decadent about dipping into a jar of silky butterscotch and fancy crème fraiche.

I don’t know why it took me so long to recreate this recipe — it was easy to make and went by without any hitch. According to the recipe I adapted it from, the secret to the perfect butterscotch pudding is to cook the butter and brown sugar together until it is “smokin’ hot”— this is what gives butterscotch its caramelized sugar flavor. If you can’t find any crème fraiche at your store, feel free to substitute with sour cream. It’ll do the trick just fine.

And, for the record, I will state that this recipe is one of the best on my blog. Truly. 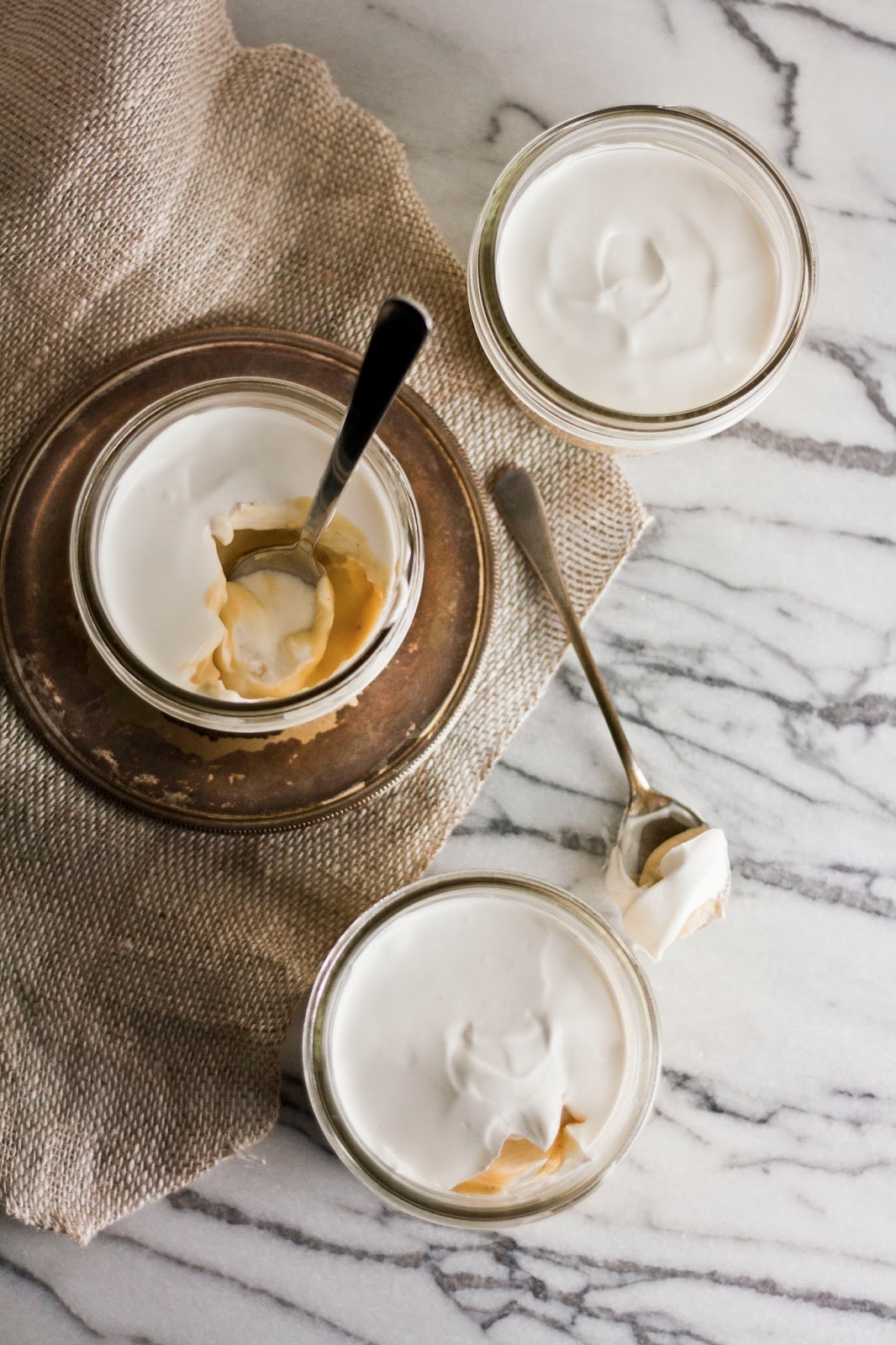 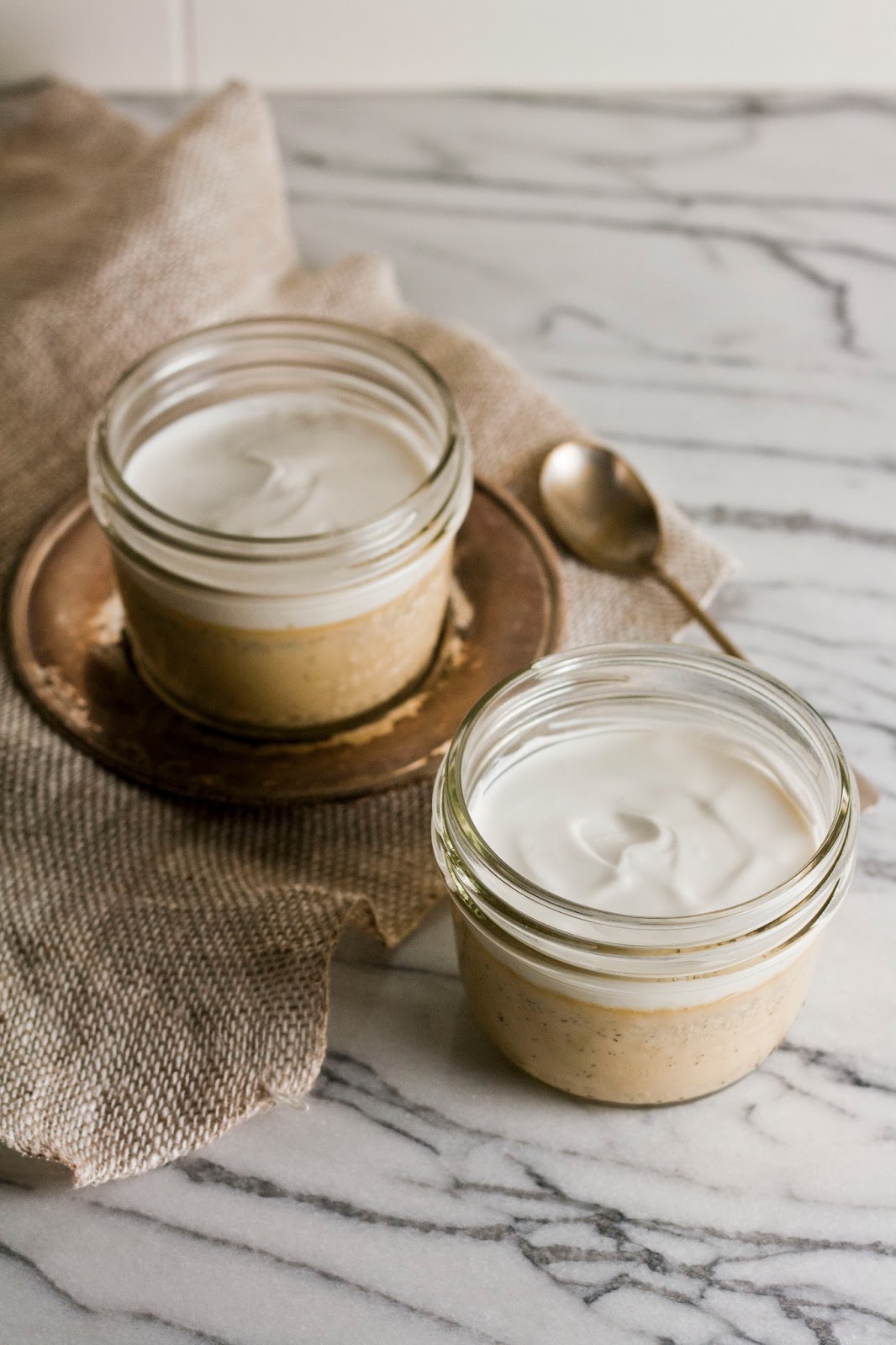 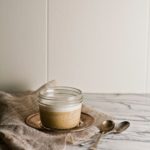